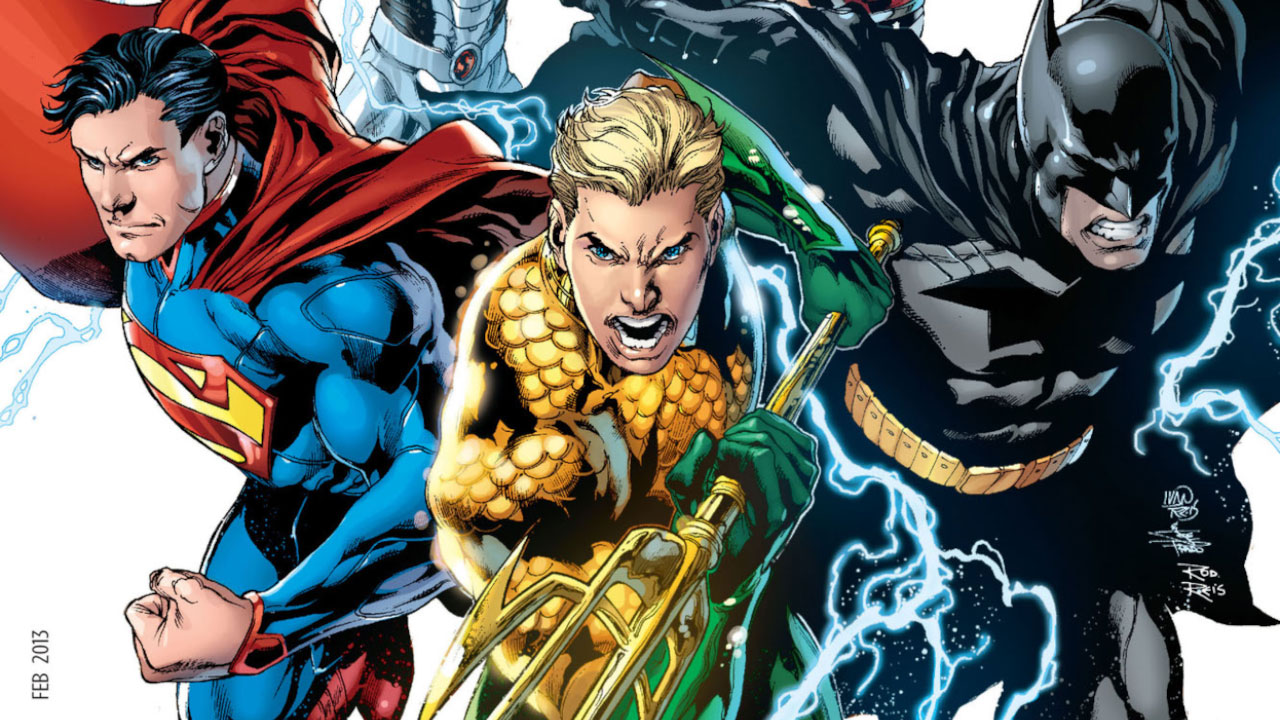 Yeah, we’ve all heard the jokes. The Man of Steel, the Dark Knight, the Amazon Warrior, and… the blonde dude in the orange-and-green suit who talks to fish. Ever since the days of Super Friends, Aquaman’s inclusion in the pantheon of modern myths we call the Justice League has been the subject of mockery, from MAD Magazine to late-night talk show monologues. But let’s get real here: without Aquaman, there wouldn’t even BE a Justice League… or, many times over, a world for the League to protect. As proof, here are five occasions of Aquaman stepping up and pulling his so-called “betters” on the Justice League out of the fire. I mean, water. Just click on each story to read it on DC Universe. 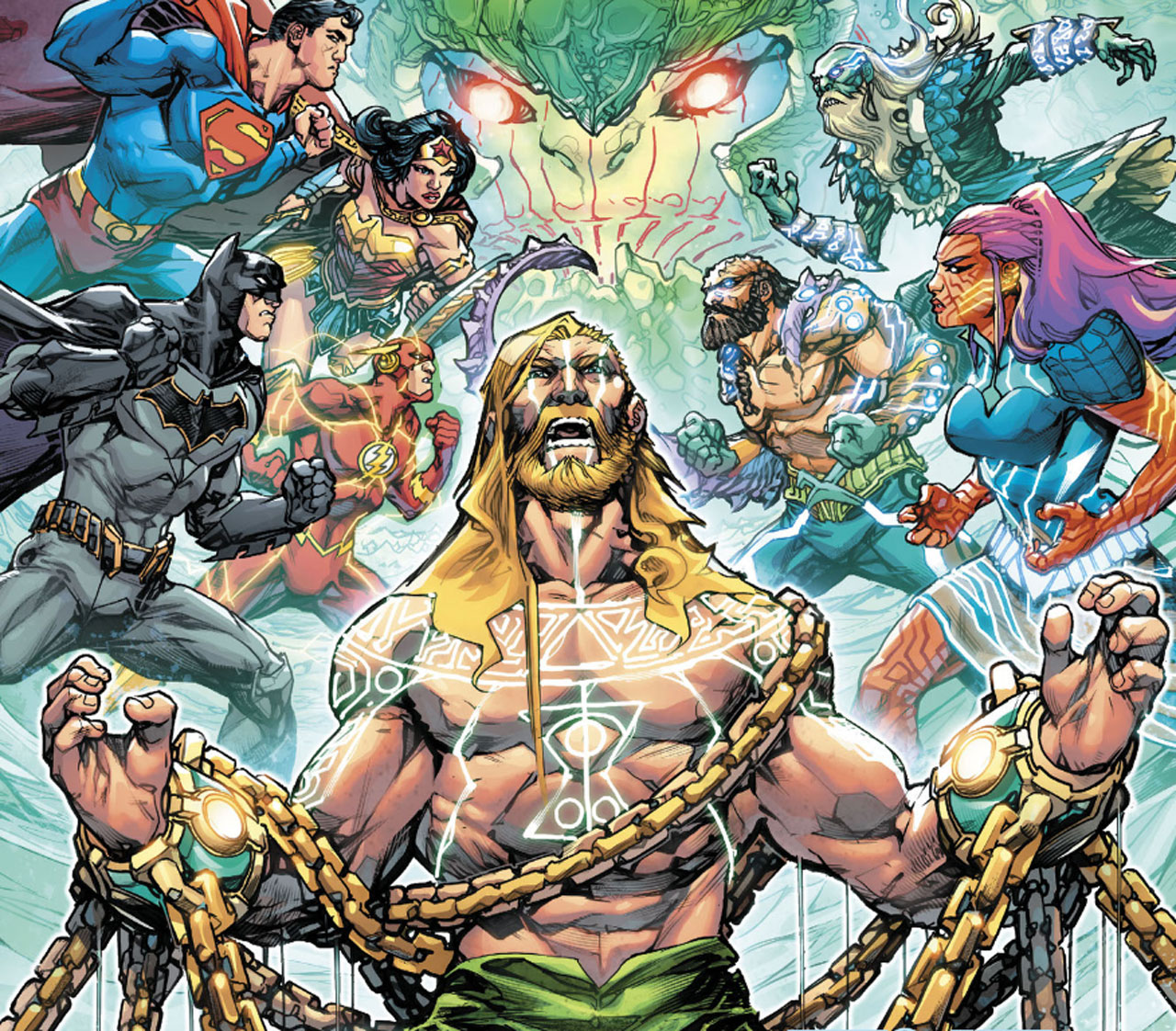 After Black Manta and Cheetah kill the sea god Poseidon, a power vacuum opens Earth up to the most merciless, ancient aquatic deities in the known and forgotten universe. Flooding the planet with mystic waters that turn every being it touches into a sea monster, it ultimately falls to Aquaman to embrace his heritage and the full extent of his power to save humanity. You know when it’s useful to command fish? When everyone on Earth’s been turned into fish. 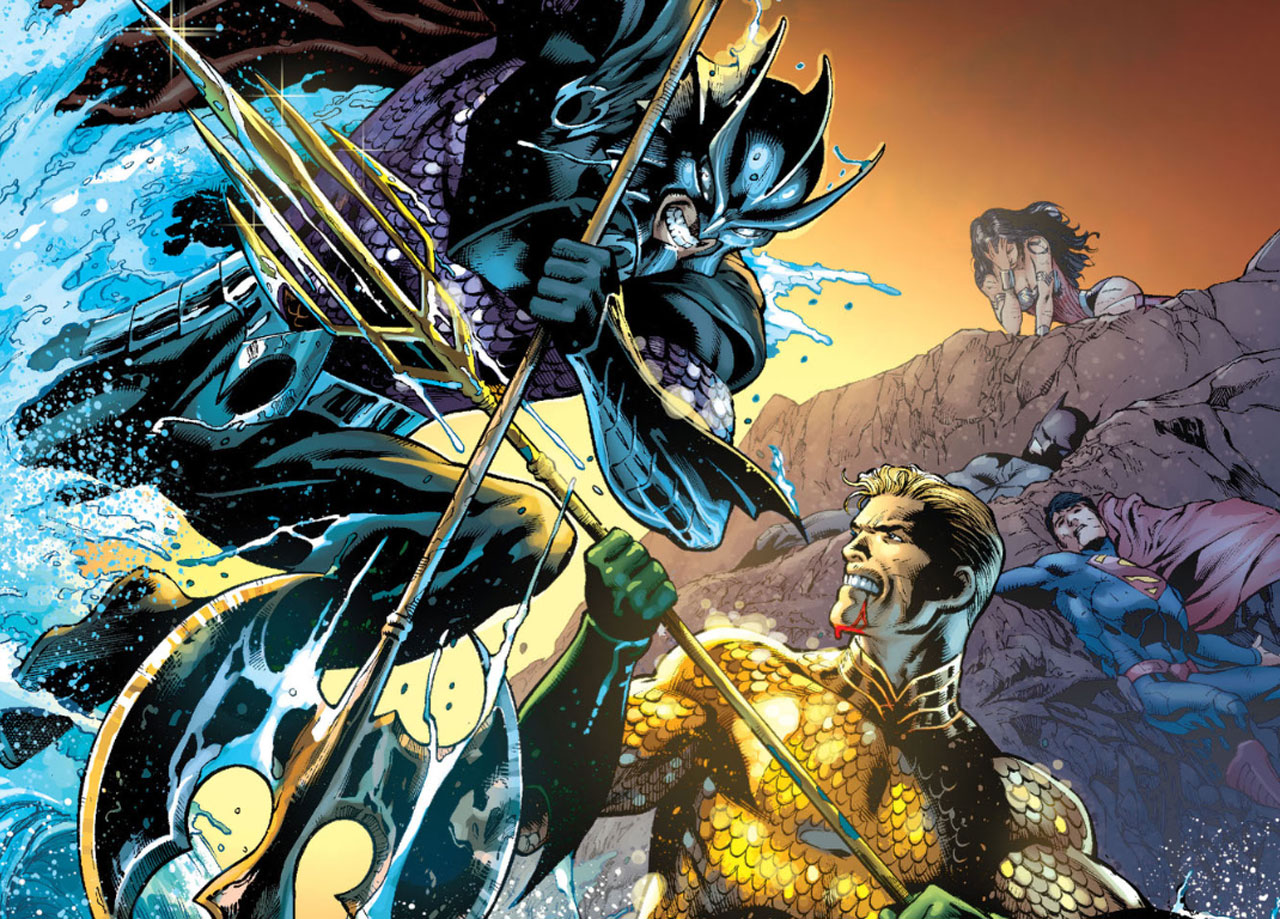 The Justice League of the New 52 era was assembled in a storyline set 5 years in the past to fight the forces of Darkseid. But their first major crisis of the modern era was against the forces of Atlantis -- as commanded by Aquaman’s traitorous brother, Ocean Master. As the League struggles to contain the fallout of a war stacked against them- the world is 70% ocean, after all- only Aquaman’s own right to the throne allows a path to peace. Sometimes it’s good to be the king. 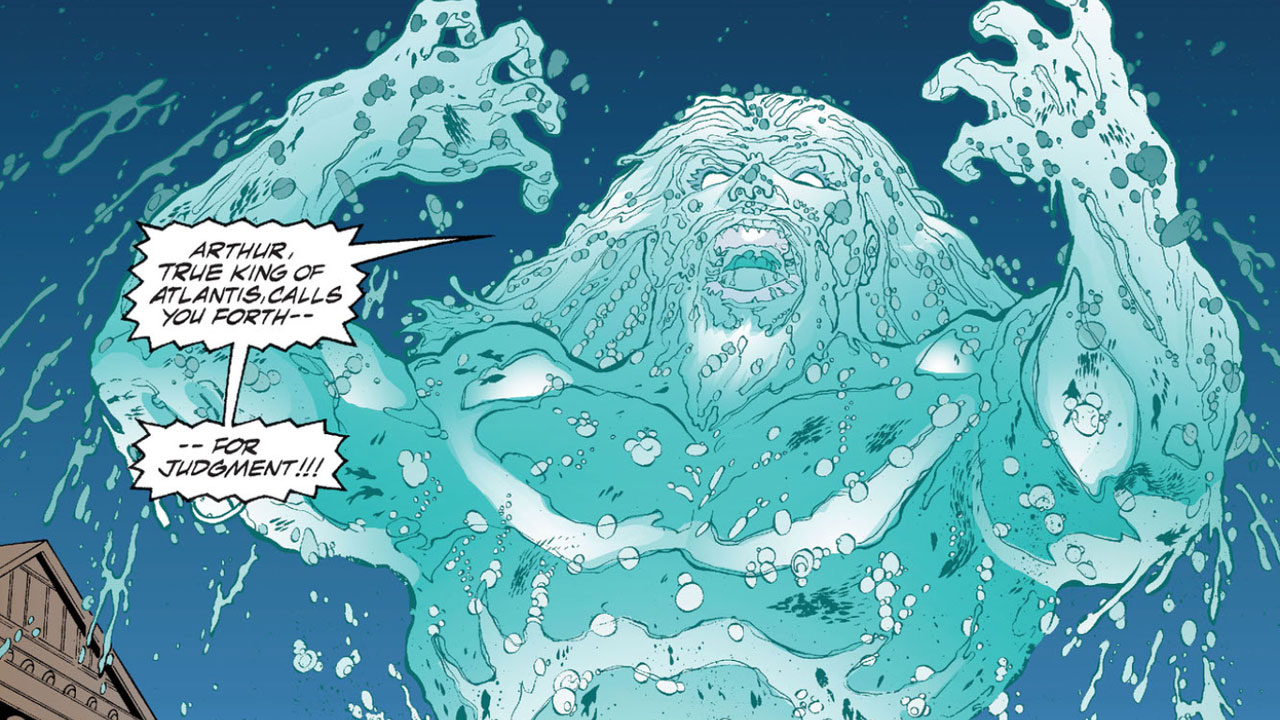 One of the biggest casualties of the Imperiex War in 2000 was the city of Atlantis, with Aquaman alongside it. But as the League eventually discovered, Aquaman and his people weren’t truly destroyed, but sent thousands of years into the past. There, the city-state had been enslaved by the ancient Atlantean sorceress Gamemnae, and Aquaman himself discorporated into a water wraith. As Gamemnae made her move to stage an attack on the present, Zatanna ultimately frees the captive Aquaman, who uses his new form to take control of the world’s oceans and defeat the sorceress’s otherwise insurmountable forces -- giving us the most powerful incarnation of Aquaman to date. 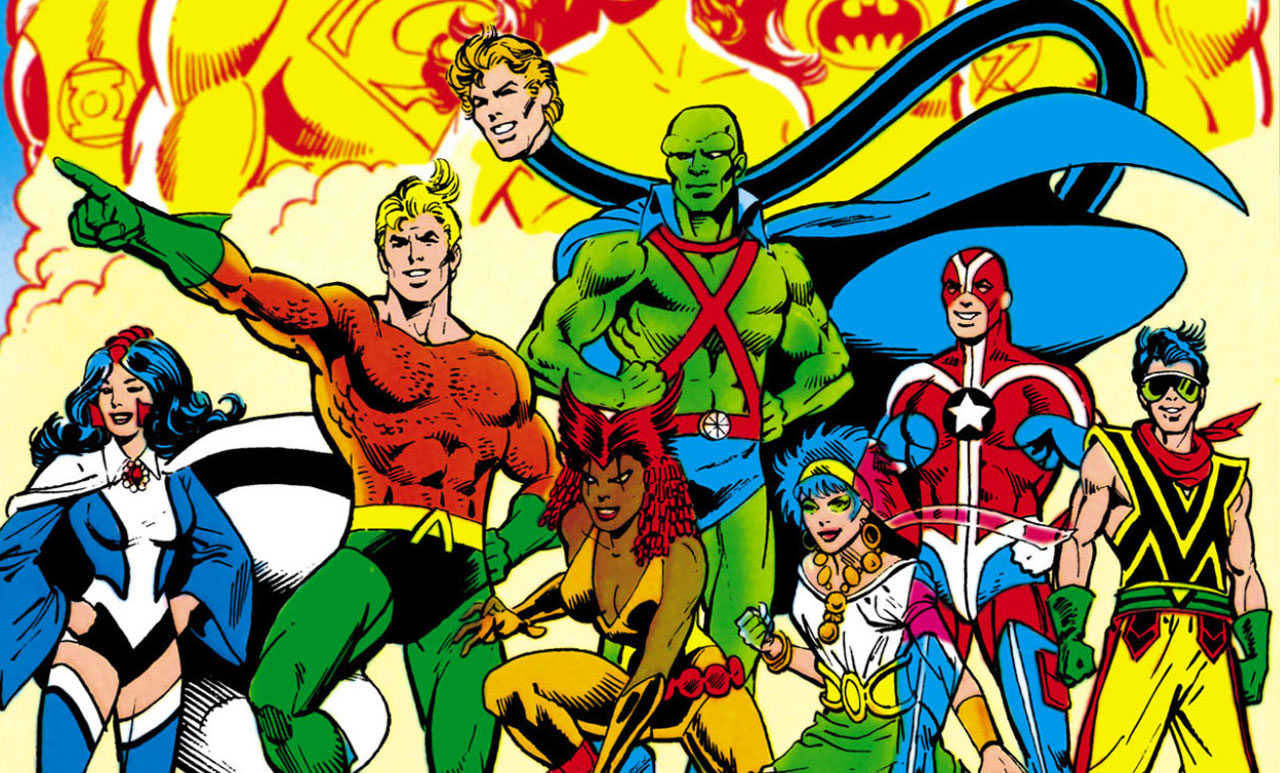 One year before CRISIS ON INFINITE EARTHS, the Justice League was facing a crisis of its own. The personal lives of the team’s charter members were clearly beginning to take a toll on their joint efforts, and they were all being spread too thin. Crucial details were being overlooked, and people who needed help were going unheeded, all because even superhumans are still only human. Rather than allow this inefficient, ineffective, but star-studded league to continue apace, it was Aquaman who saved the team and its mission… by disbanding it. Dismissing the A-Listers of Superman, Batman, Wonder Woman, Flash, and Green Lantern, Aquaman began a new era of the Justice League, one literally more down-to-Earth as they abandoned the destroyed orbital watchtower for a place in Detroit -- alongside a cadre of heroes who could be counted on to commit to the Justice League as full-timers. (Or, in other words, anybody he could find with nothing better to do.) 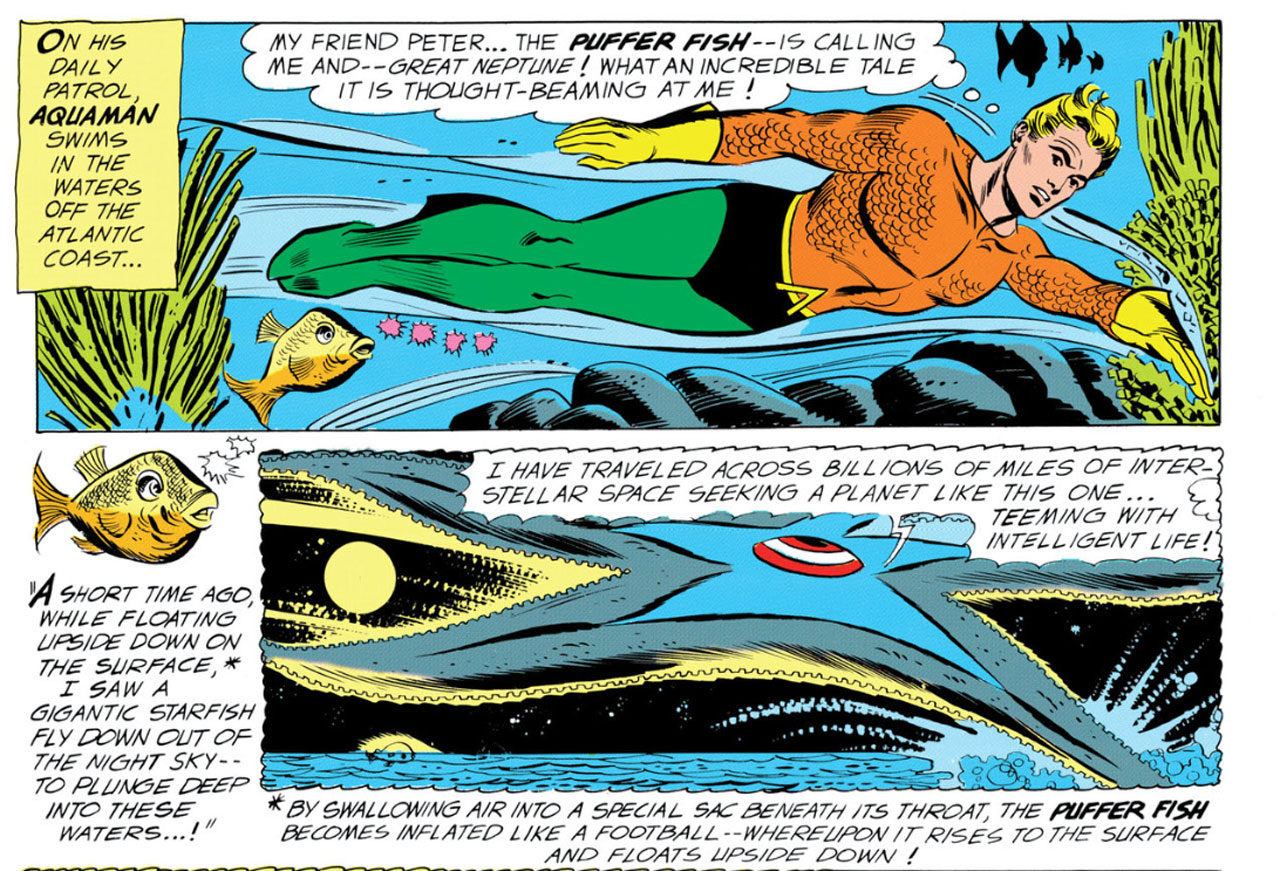 Hey, do me a favor and flip back to THE BRAVE AND THE BOLD #28, all the way back in 1960. That’s right, the very first appearance of the Justice League. The one with Starro the Conqueror on the cover. Open it up. Who’s that you see on the first page of the story? Is it Superman? Batman? Martian Manhunter, the so-called soul of the group? Nope -- it’s Aquaman. We don’t talk about it much, but he’s really the guy who kicked off this entire Justice League thing in the first place. And why? What important role did Aquaman have to play? Oh, only discovering the impending invasion of Starro before it was too late for any of the world’s heroes to do anything about it. And how, pray tell, did he, Aquaman of all heroes, learn of such a threat? What sets him apart from any other one of Earth’s protectors that he could get the scoop where it eluded all others? Well, we’ll tell you. Just take a look at that panel we’ve included up there and see for yourself. Wait for it. Wait for it…

Does Aquaman deserve more respect? Let ‘em hear it in our Community!