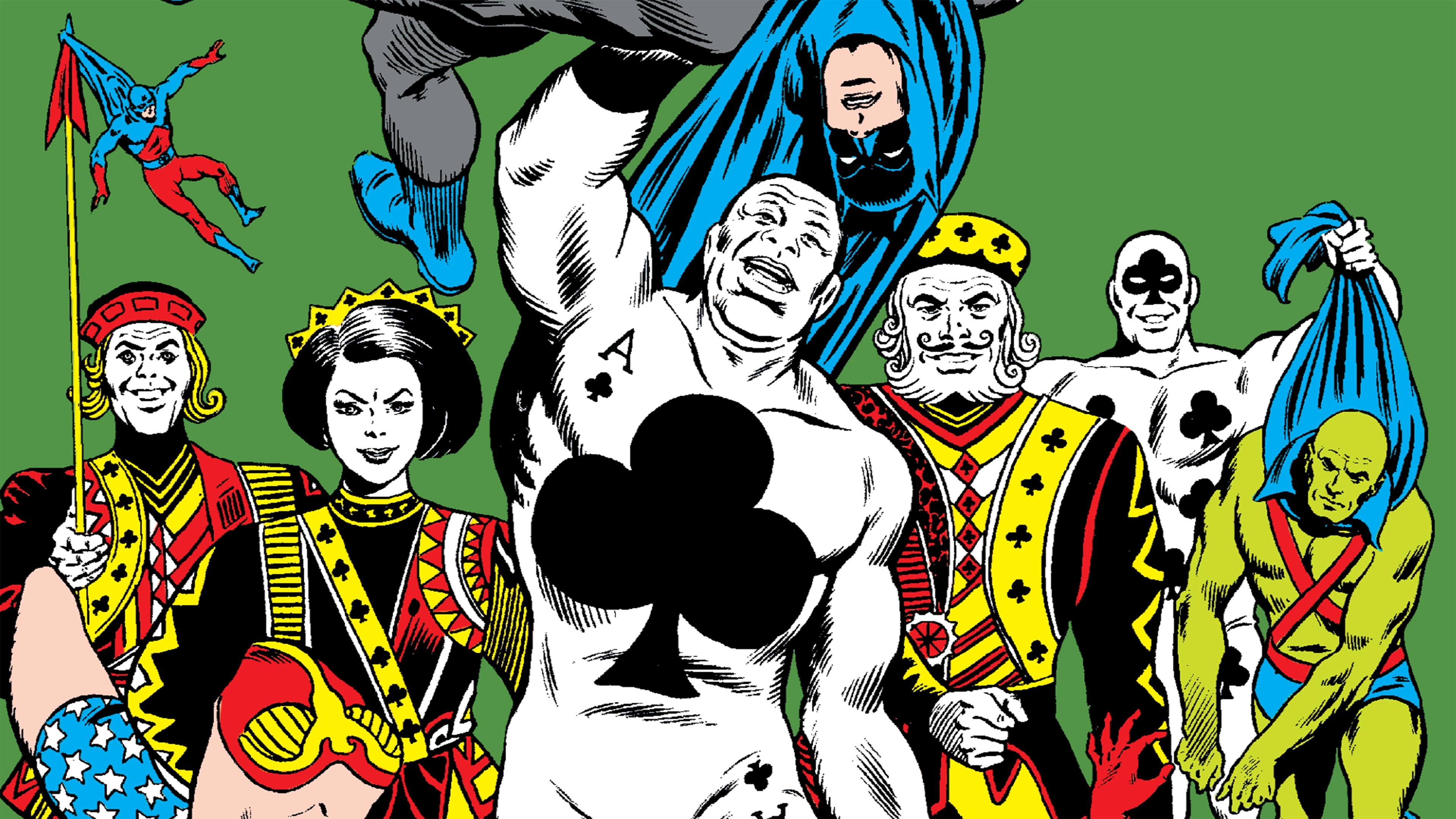 All In: A History of the Royal Flush Gang

Despite being named after the highest poker hand (and standard sitcom plumbing company), the Royal Flush Gang is often overlooked. There are no Jokers in this deck, only the most capable and highly trained thieves money can buy. The deck is stacked with Ace, King, Queen, Jack, and Ten so there’s never a need for them to bluff. But let's raise the stakes -- and deal out the history of the Royal Flush Gang... 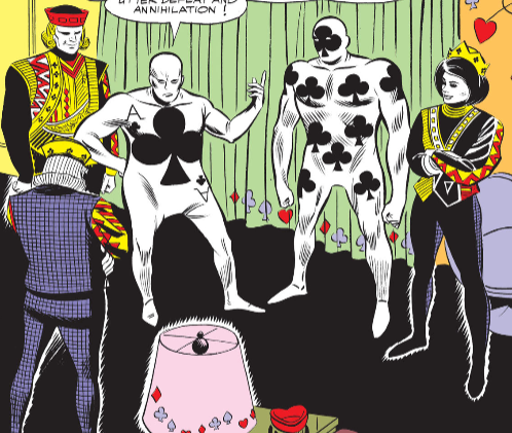 Professor Amos Fortune called upon his former childhood gang to make up the first iteration of the Royal Flush Gang in Justice League of America #43. Donning the Ace of Clubs himself, Fortune used his stellaration technology to aid in the crimes. After being stopped multiple times by the Justice League of America, Fortune folded and a new mysterious Ace came to briefly lead the team. They changed their suit to Spades, but after facing the Joker they discarded their efforts. For a time, Jack joined the Secret Society of Super Villains going by the name of Hi-Jack. 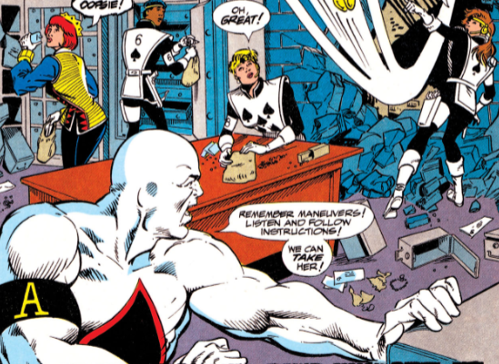 Hector Hammond adopted the name Wildcard when he brought together a motley crew of criminals for the second iteration of the gang. Their hand was comprised of King - a costumed charismatic criminal with the power of mind control, Queen - an alcoholic actress with a staff to create illusions, Jack - a former fugitive fixed with an energy sword, Ten - a disgraced test pilot with enhanced reflexes and explosive cards, and Ace - an able-bodied android.

After Hammond’s plans fell through, the team regrouped under Maxwell Lord for a few gigs. Later in New Titans #68, they worked for the Gambler (who was disguised as the Joker). After he revealed his true hand, they knew it was time to fold ‘em. 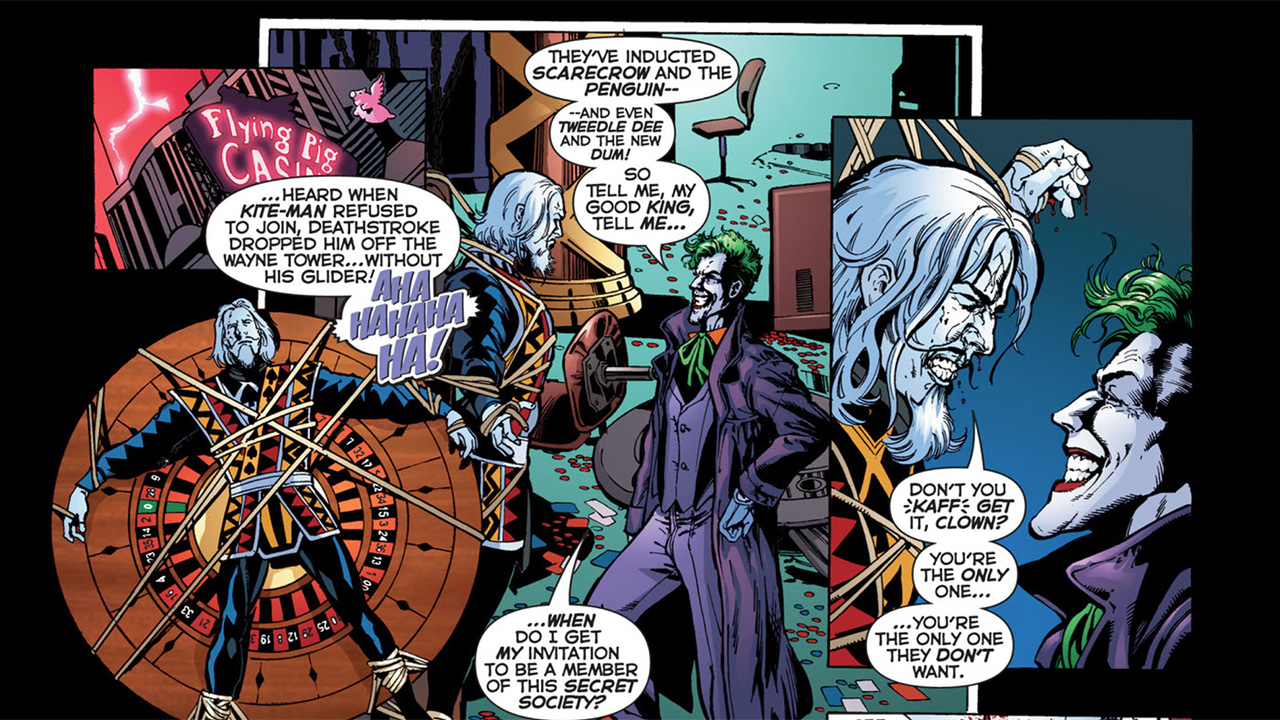 What was once a hand of five, the Royal Flush Gang drew more members and expanded its reach across every major city in America. Each one had 52 members split into 4 suits and run by high ranking members known as “court cards.” Sound familiar? Each player could rise or fall depending on their performance.

One of these cells was taken over by Joker in Infinite Crisis #2. He kills the leaders and leaves the immortal King alive, torturing him. A street gang version appears in the Villains United storyline.

After the Crisis, Amos Fortune returns, but this time uses the “Wild Card” name to recruit new members. The group he runs is a smaller contained version of the cells, still with members who can rise through the ranks. Alternatively, in Zatanna #4, Zatanna faces off against a Las Vegas franchise named after Rat Pack members instead of playing cards. 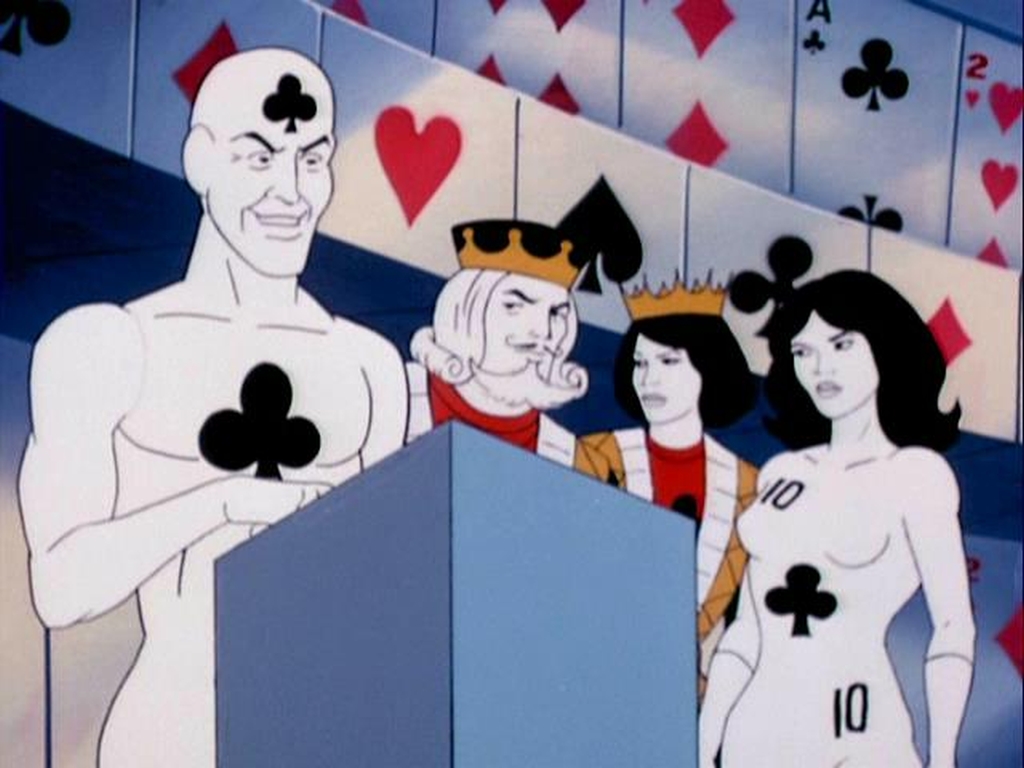 Many fans were first exposed to this gang during their animated appearances. They first graced the small screen in “The Wild Cards” episode of The Super Powers Team: Galactic Guardians show (that’s a mouthful). In the episode, the gang works for Darkseid. Batman deduces that Ace is actually the Joker. 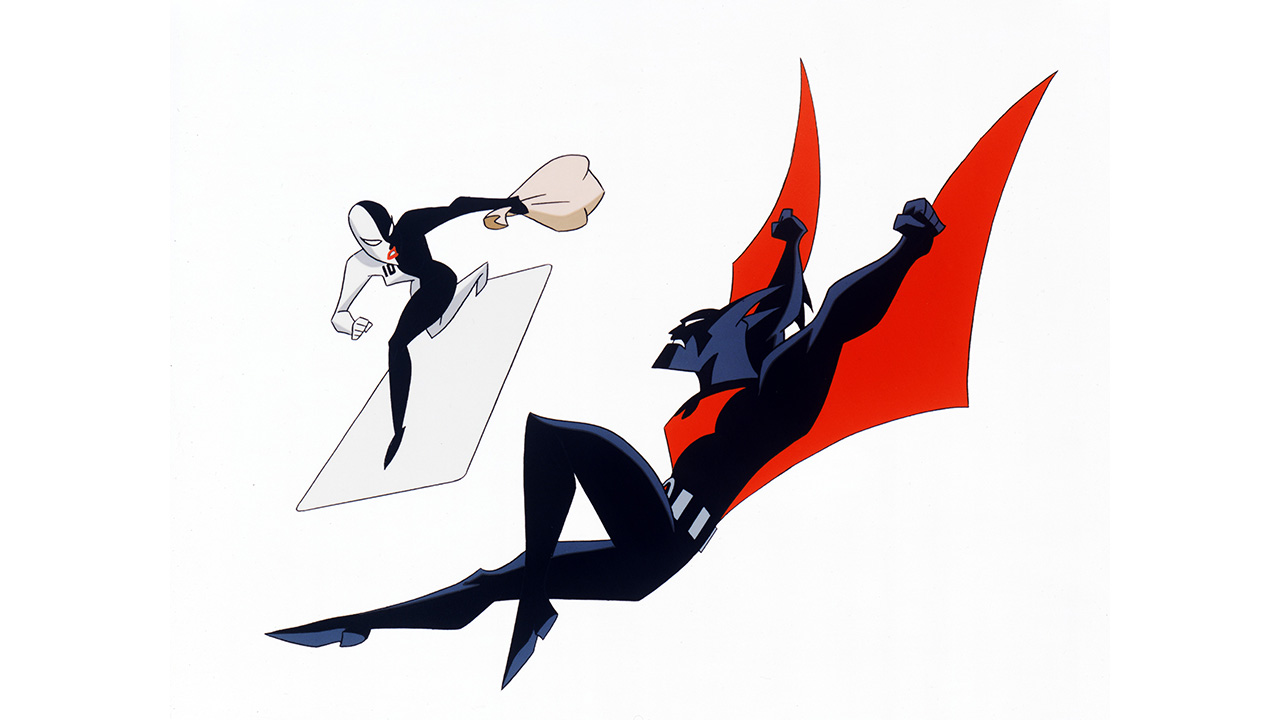 They wouldn’t be seen on TV for another decade until appearing in three Batman Beyond episodes “Dead Man’s Hand,” “Once Burned,” and “King’s Ransom.” This time the gang puts the “family” in Royal Family. King Dad and Queen Mom use their kids Jack and Ten, an android Ace, and a deck’s worth of future tech to steal from Gotham’s well-to-do. Ten and Terry have a very Catwoman/Batman relationship over the course of the series. These designs have carried over to the DC Rebirth canon. 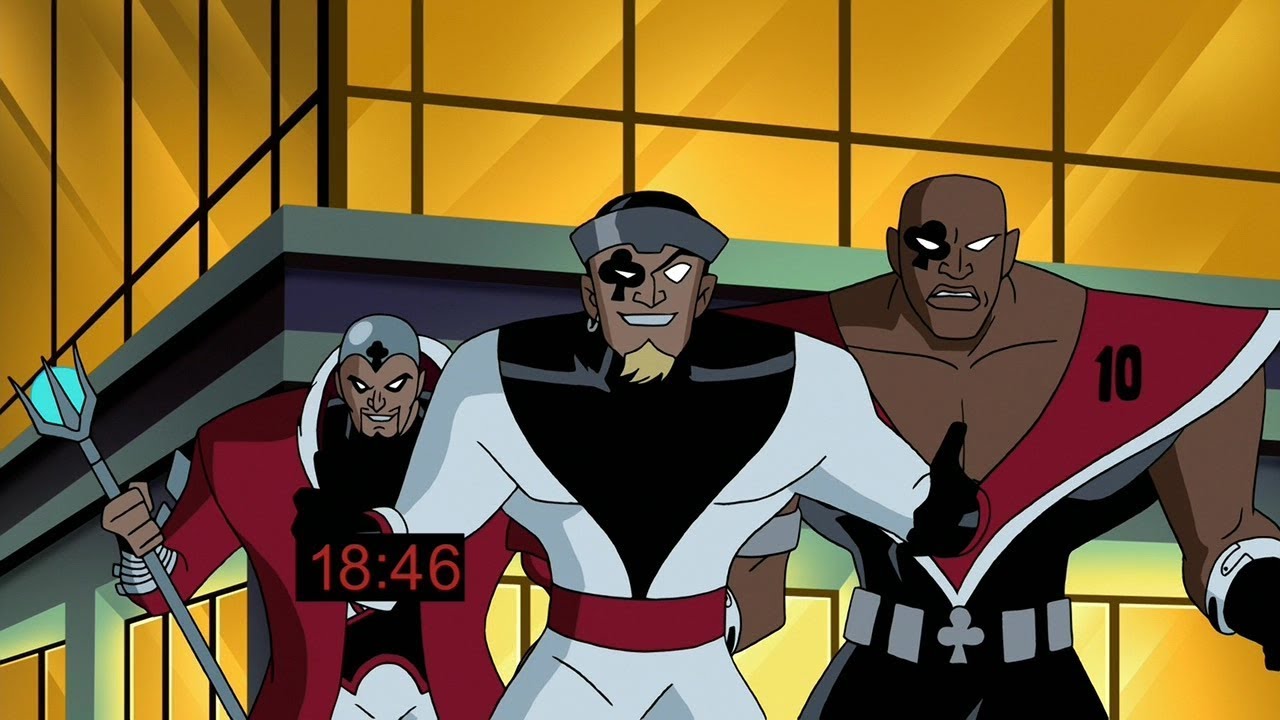 The gang appears in another episode called “Wild Cards,” only this time in Justice League. A group of escaped Project Cadmus teenagers is found by the Joker who bestows them with the “Royal Flush Gang” name. Each have unique powers: King - pyrokinesis, Queen - metal manipulation, Jack - elasticity, Ten - invulnerability, and Ace - telepathy.

A second version appears in the episode “Epilogue.” Ace’s telepathy has evolved into reality warping. The new team is rounded out with a big-headed King, a strong Queen, a Samurai Jack (get it?), and Ten who whips her hair back and forth. 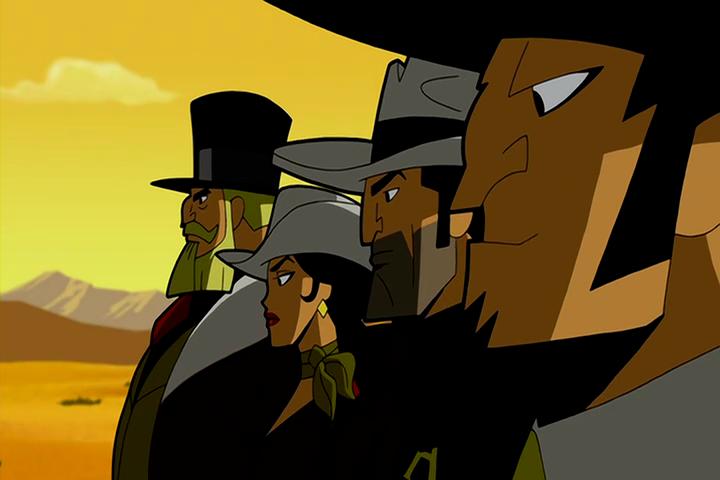 The last animated TV appearance was in the “Return of the Fearsome Fangs” episode of Batman: The Brave and the Bold where Batman met them in the Old West. These thieves wear a diamond on their outfits and give Jonah Hex some trouble. 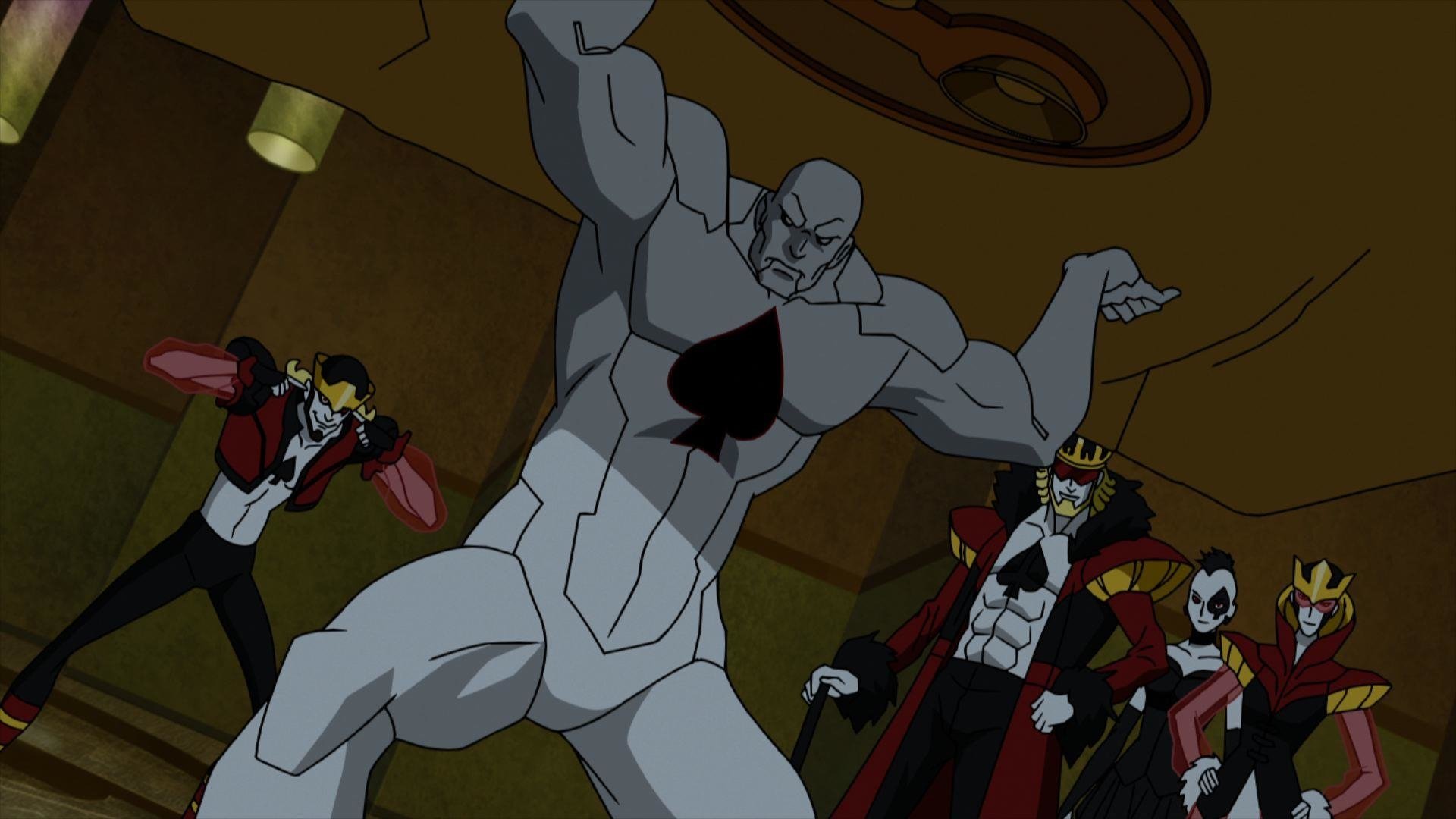 The first family of crime has since appeared in the Arrowverse, in Justice League: Doom, and even as a small easter egg in Batman: Arkham Knight. These thieves have a rich history (emphasis on rich) and deserve to be in more storylines. Hopefully, they haven’t folded for good and will be dealt more often in the future.

Which hand of the Royal Flush Gang do you go all in for? Let us know in our Community!