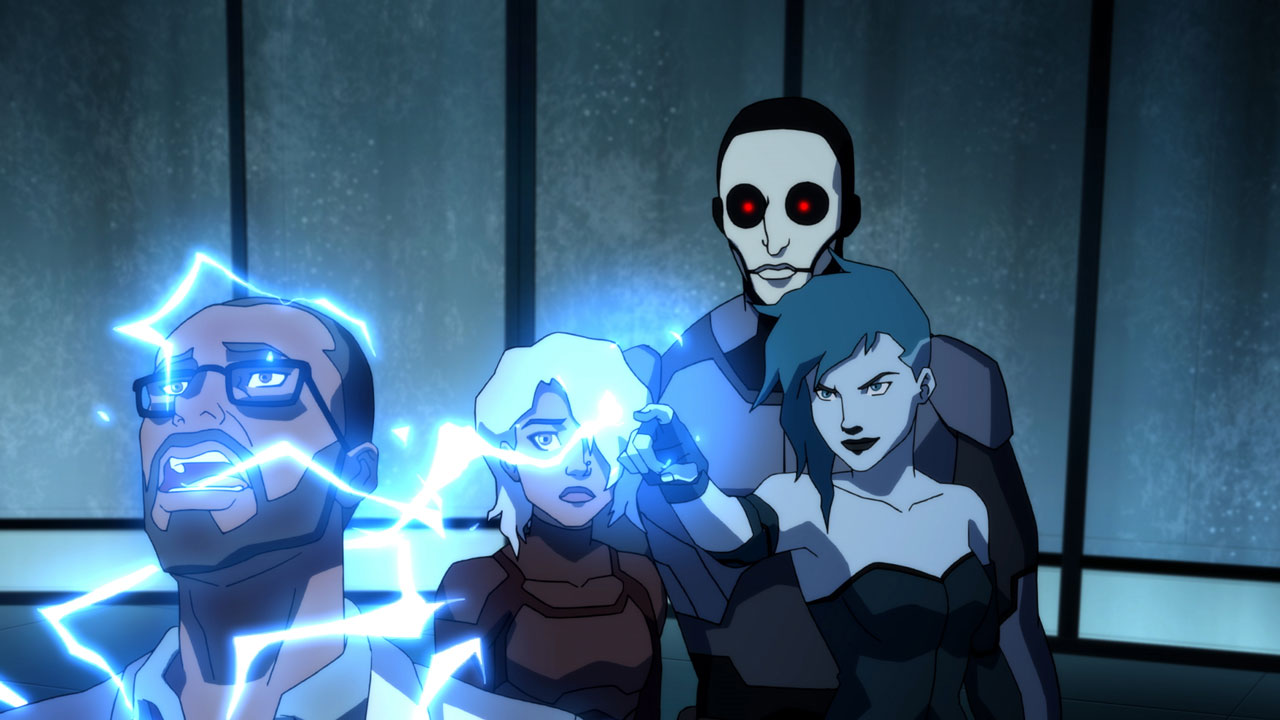 All the Easter Eggs in YOUNG JUSTICE: OUTSIDERS Episodes 7-9

This week, audiences were whelmed with three more episodes of Young Justice: Outsiders (“Evolution” “Triptych” and “Home Fires”), and once again the show's creators have proven their nerd cred! Each episode was filled with some deep cuts from DC Comics lore. Let’s break down the Easter eggs… 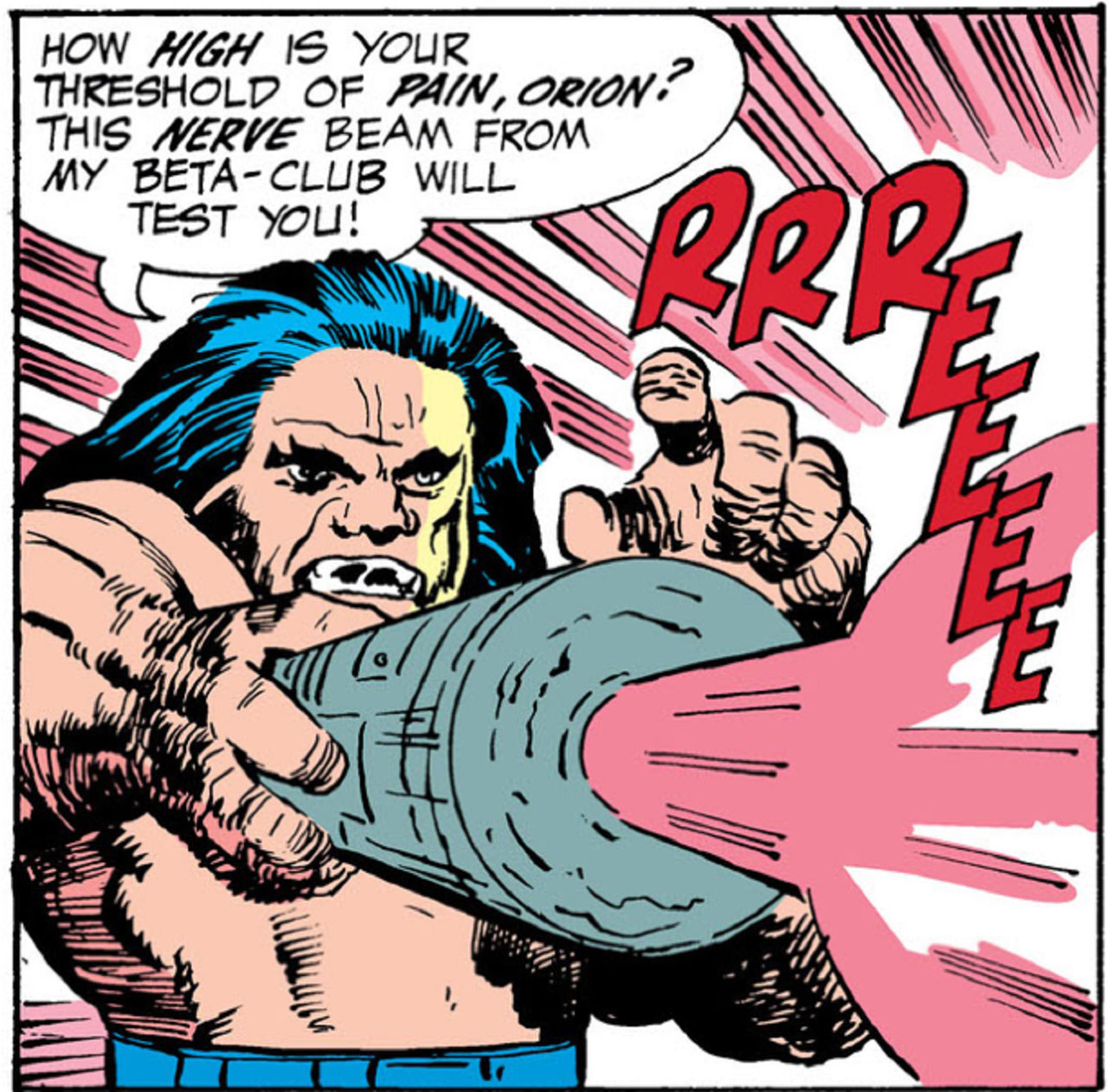 This week we met two more members of Darkseid’s inner circle. Kalibak, who is mockingly referred to as Darkseid’s favorite, first appeared in New Gods #1 (written by and penciled by Jack Kirby, read New Gods #1 here). Kalibak is the mightiest warrior from Apokolips and is driven by an insane jealousy of his brother Orion.

Throughout this season, we’ve seen the name "Goode" pop up constantly on things like goggles and news networks. Now we finally see who is behind it…Granny Goodness! Granny is one of Darkseid’s most coldly efficient lieutenants, and is usually tasked with training and leading his armies. Granny was first seen in Mister Miracle #2 (story and art by Jack Kirby, read Mister Miracle #2 here). 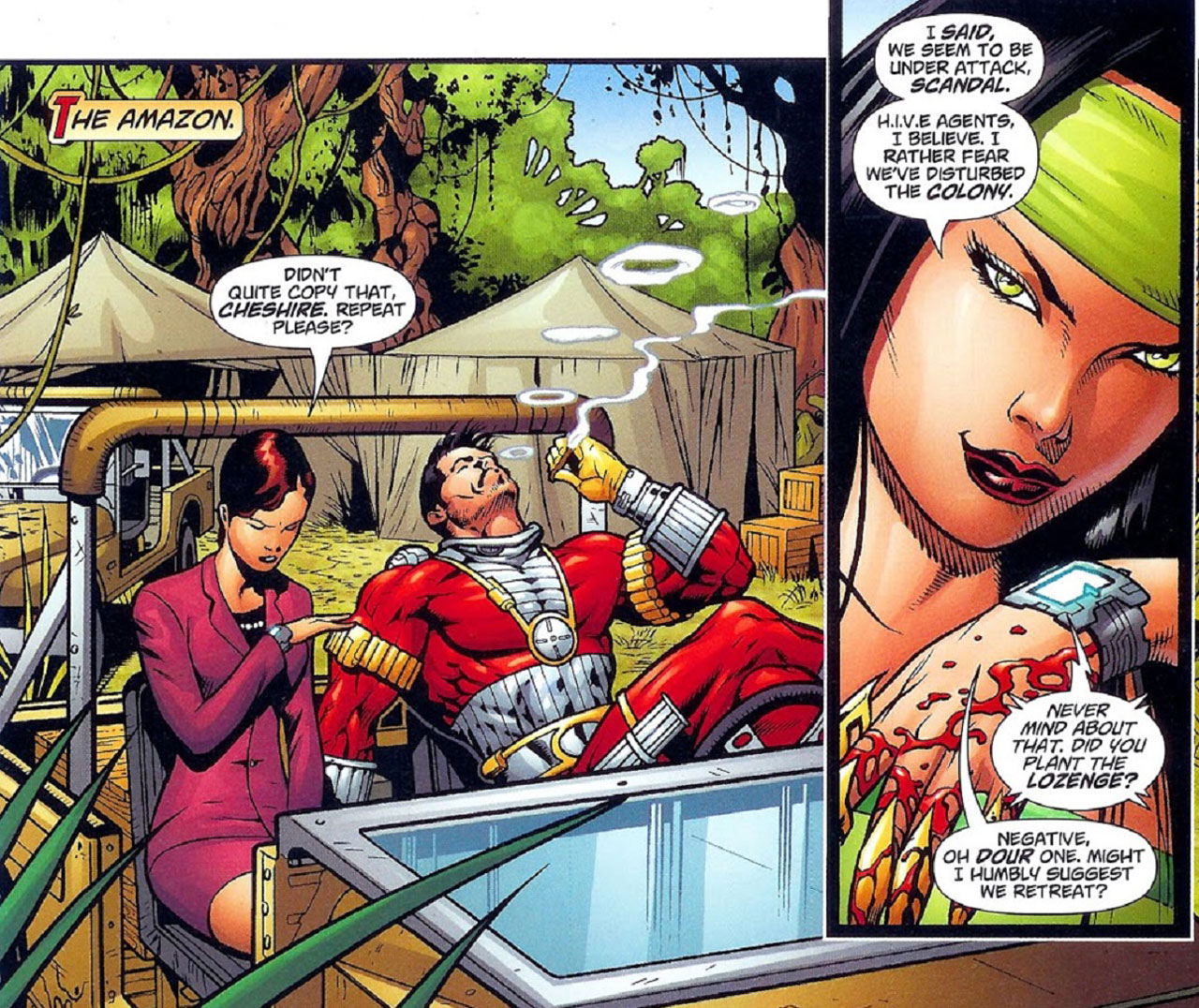 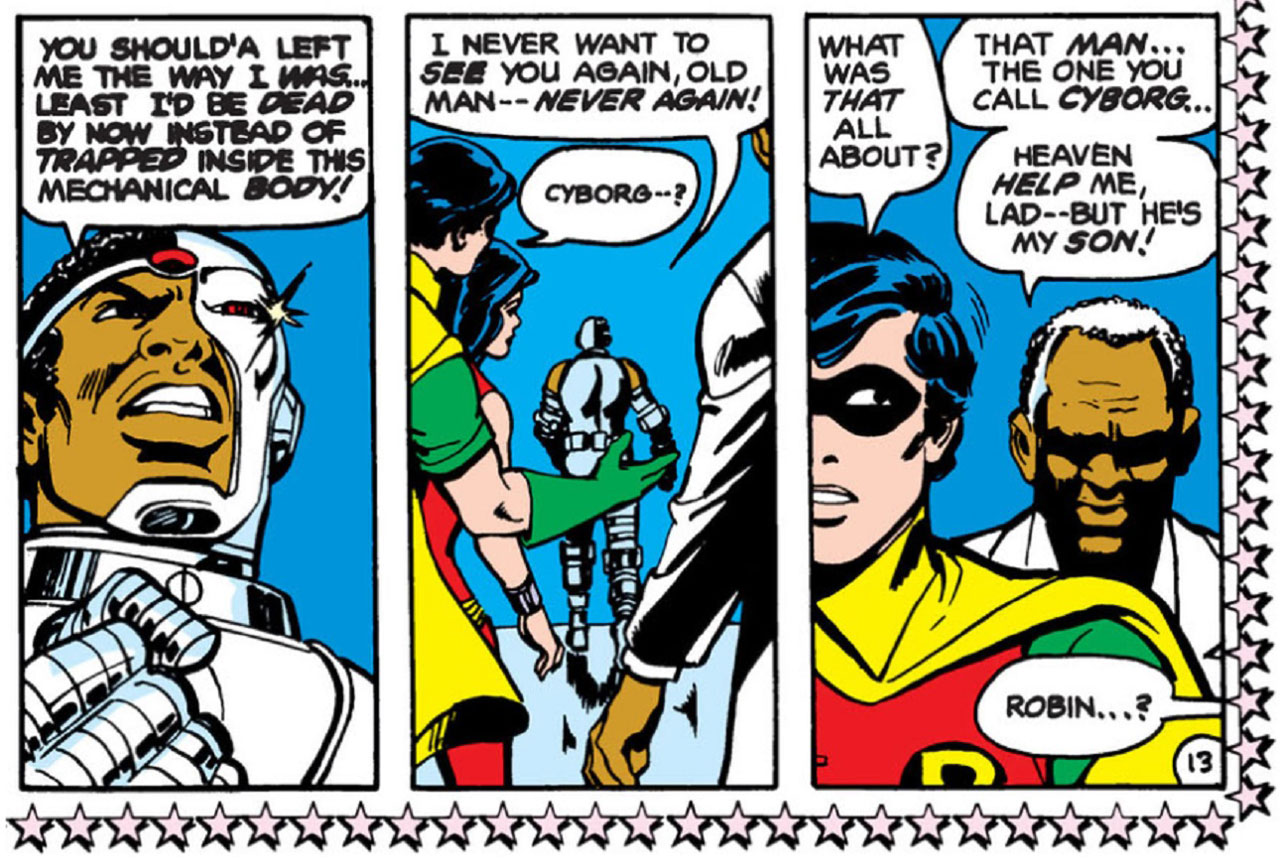 While Nightwing’s team is lounging on the beach and listening to the radio, Steve Lombard’s sports show mentions some very familiar names, including Victor Stone. This football player later becomes known as Cyborg, after an accident results in his father repairing his body with cybernetic parts. Sadly, the sports career Lombard envisions for Stone was cut short by this development, but his superhero career proves far more important... We later see Victor’s father Silas during the S.T.A.R. Labs heist. Father and son first appeared in DC Comics Presents #26 (written by Marv Wolfman and penciled by George Perez, read DC Comics Presents #26 here).

And did anybody catch the name of the high school Victor Stone played for? Henry Heywood High School is a reference to the hero known as Commander Steel, which is a subtle hint to Victor’s metal future. Heywood first appeared in Steel #1 (written by Gerry Conway and penciled by Don Heck). 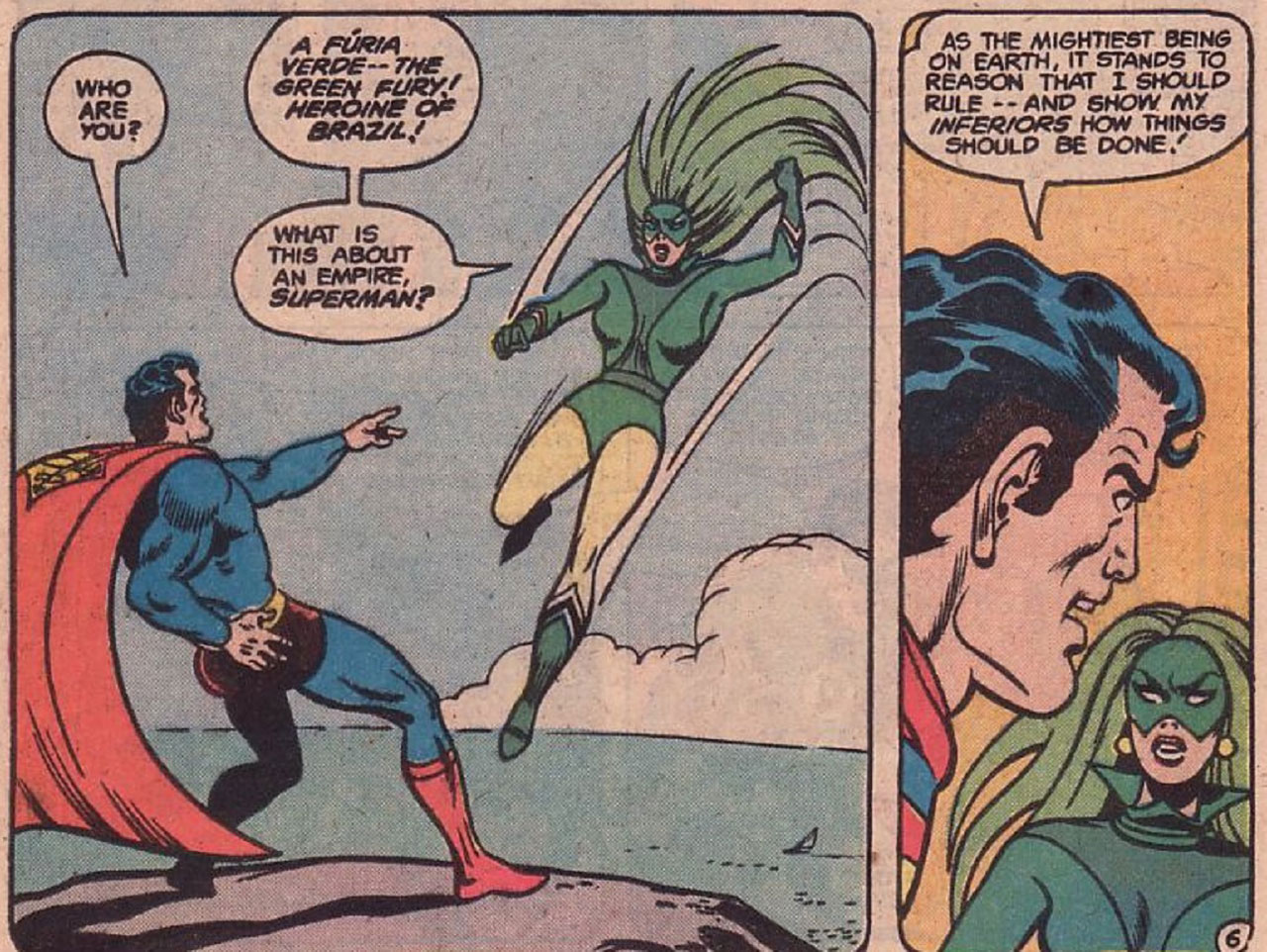 To solve Geo-Force’s continuing nudity problem, Nightwing brings Brion a suit “designed by Fire." Fire is a South American member of the Justice League who first appeared in Super Friends #25 (written by E. Nelson Bridwell and penciled by Ramona Fradon), calling herself the Green Fury. The series was a tie-in to the Super Friends cartoon, but Fury was later brought into DC continuity in DC Comics Presents #46 (written by E. Nelson Bridwell and penciled by Alex Saviuk). Since Fire's powers saw her turn into a being of green flame, she is indeed best suited (no pun intended) to solve Geo-Force’s clothing dilemma. 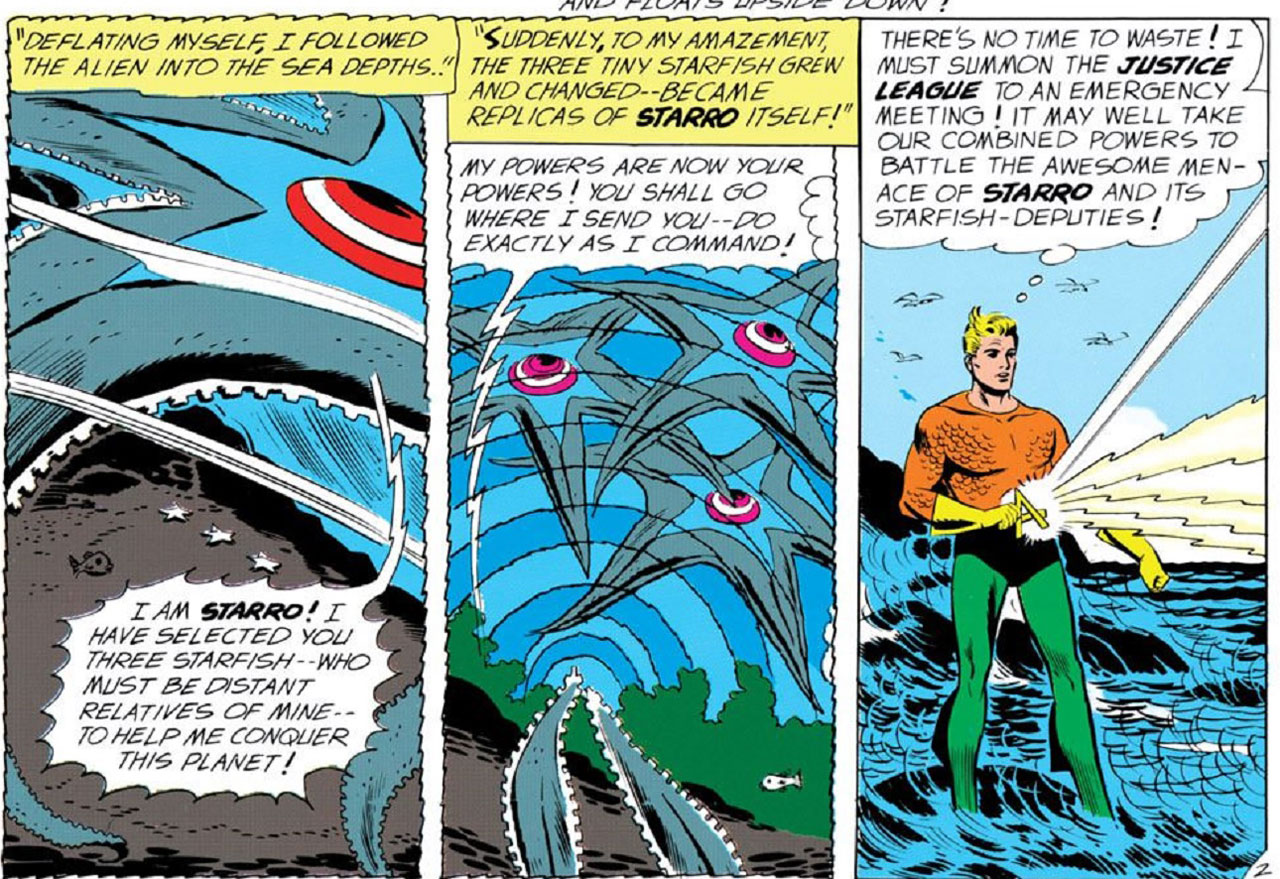 Fans of Silver Age Justice League of America stories will be smiling ear to ear while watching “Evolution”. During Vandal Savage’s flashbacks, we get a glimpse of Starro, the mind-controlling, starfish-shaped alien who the Justice League when the team first appeared (way back in Brave and the Bold #28, written by Gardner Fox and penciled by Mike Sekowsky). It’s mentioned that the League are dealing with the Appellaxians, another alien group they faced back in the Silver Age (in Justice League #9, written by Fox and penciled by Sekowsky). Homages to these and other classic Silver Age battles were seen in the Justice League trophy room in the Young Justice: Invasion episode “Alienated”.

In “Triptych”, Cheshire is joined by a trio of thieves in her S.T.A.R. Labs heist. Livewire was created for Superman: The Animated Series and debuted in the episode aptly titled “Livewire”. She was later brought into the mainstream DC Comics canon in Action Comics #835 (written by Gail Simone and penciled by John Byrne).

The Shade first appeared way back in Flash Comics #33 (written by Gardner Fox and penciled by Harold Wilson Sharp). Comic readers will be pleased to see that he dons his trademark top hat by the end of this episode. 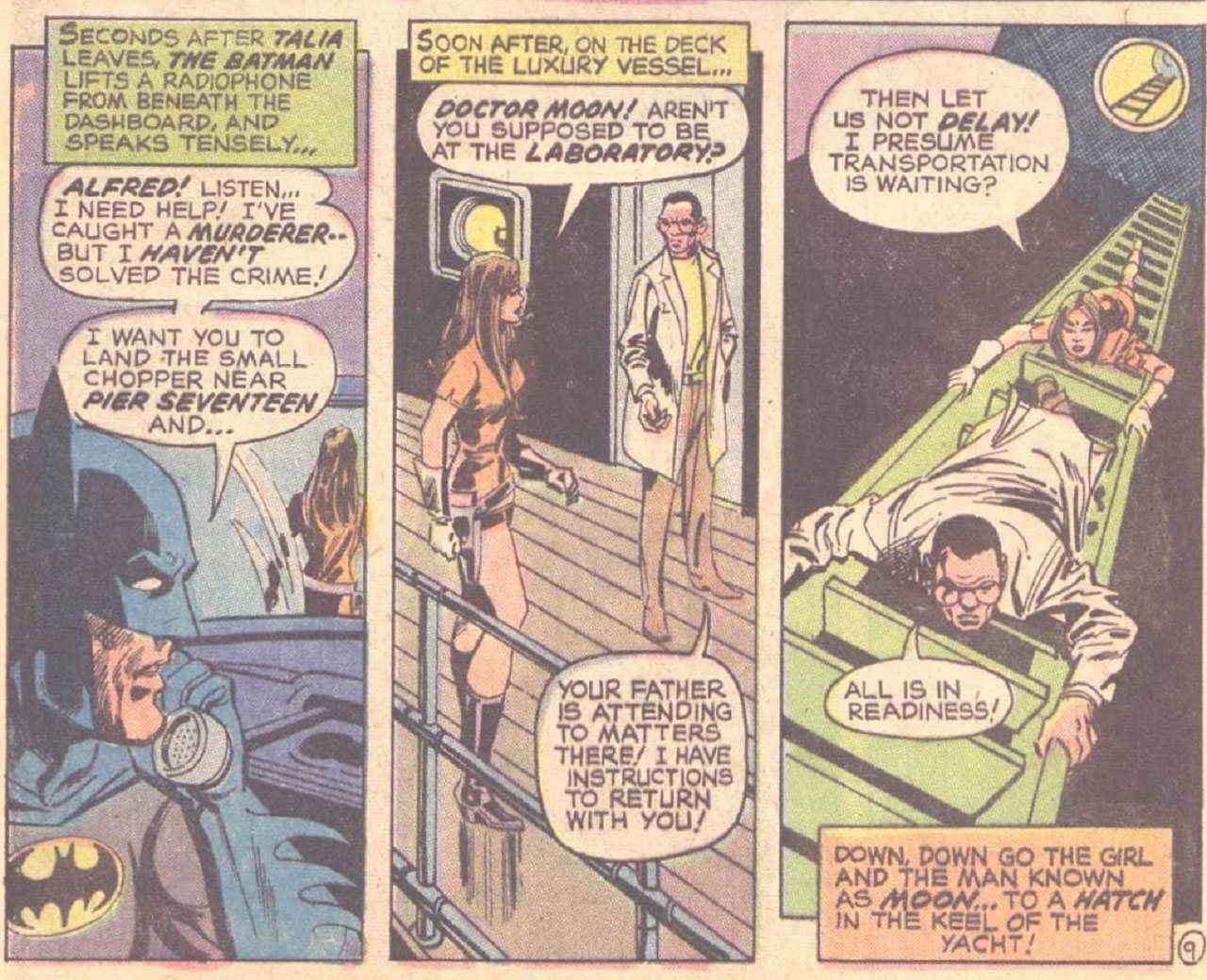 After being wounded in the S.T.A.R. Labs heist, Jade visits Dr. Moon to get herself patched up. Dr. Moon is the DC Universe’s resident crime doctor and mad scientist. His unethical methods and love of torture have made him a favorite physician of many super-villains. He was first seen working for Talia al Ghul in Batman #240 (written by Denny O’Neil and penciled by Irv Novick). 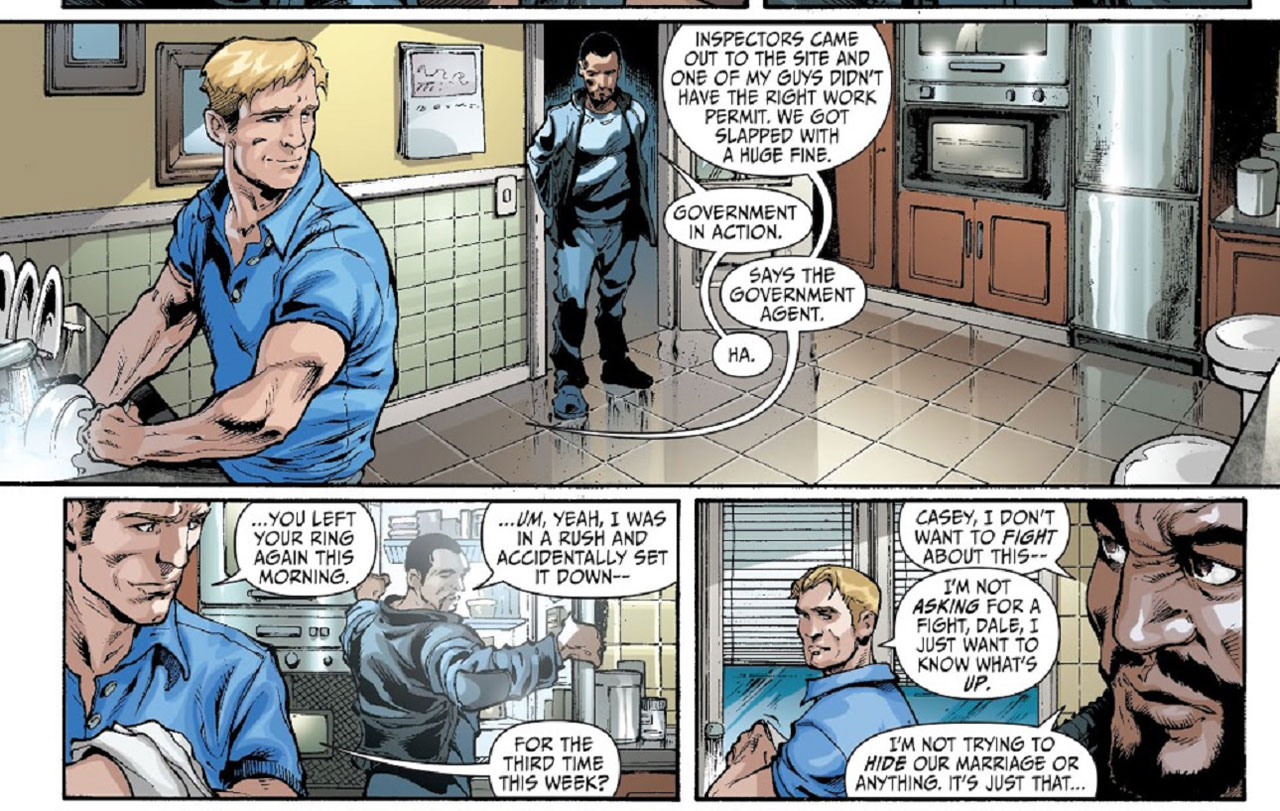 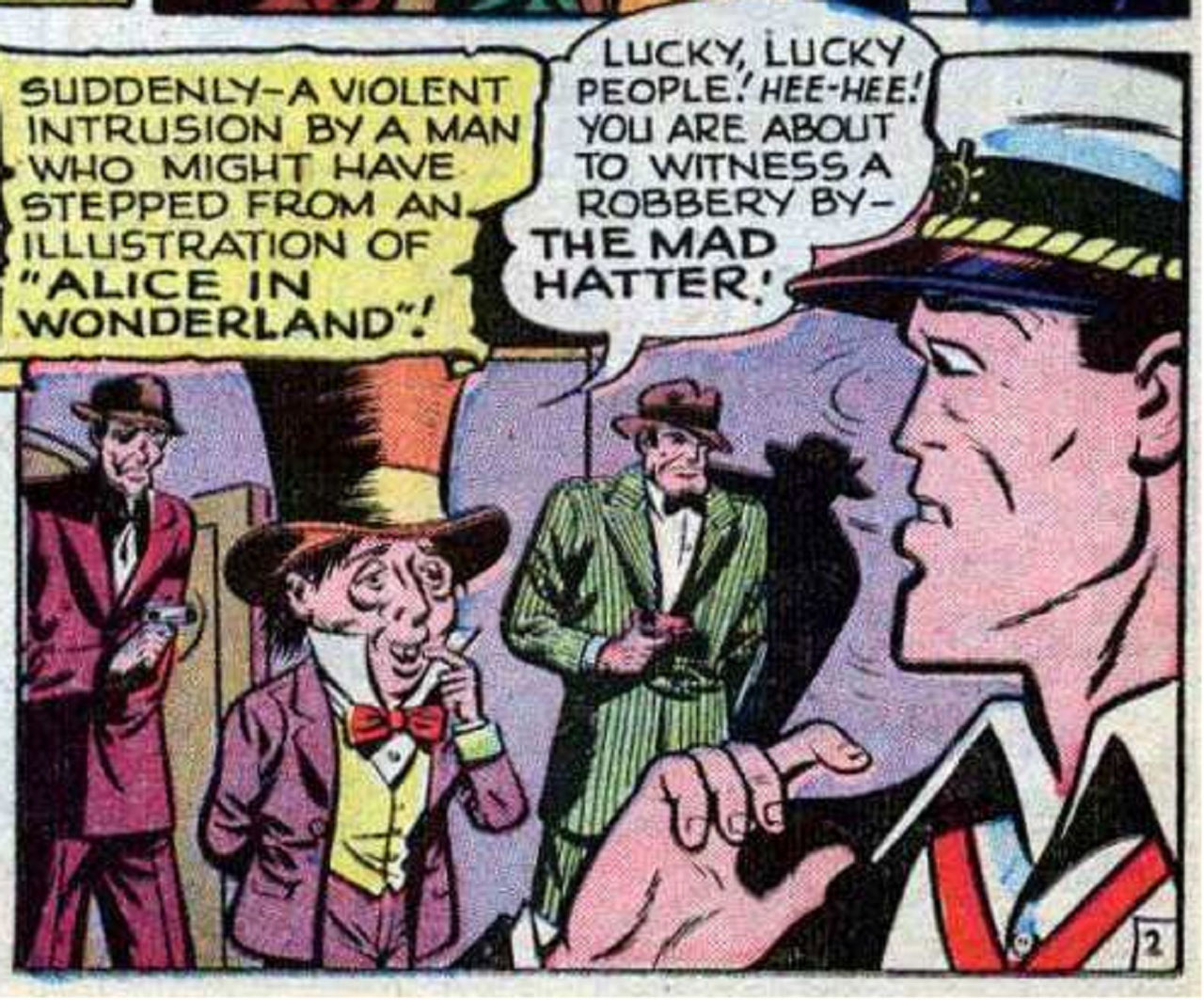 During “Triptych”, Robin and his team are seen tracking Jervis Tetch. Tetch is the classic Batman villain known as the Mad Hatter, due to his obsession with Alice in Wonderland and his MO of mind control via high-tech hats. He first appeared in Batman #49 (written by Bill Finger, penciled by Bob Kane and Lew Sayre Schwartz). 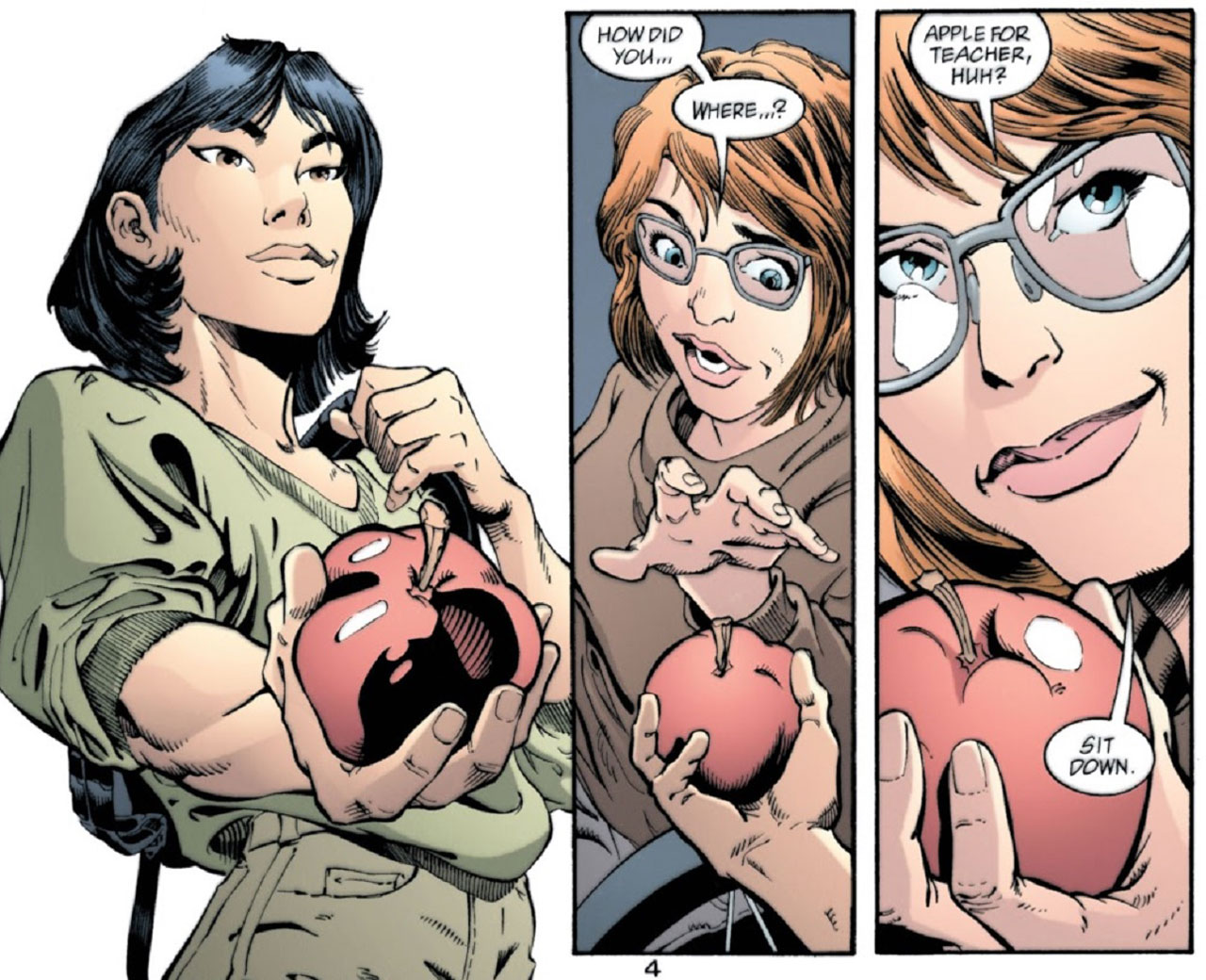 This week, we meet a new member of Batman’s covert ops group, the girl called Orphan. Her real name is Cassandra Cain, and she was raised sans language skills in order to be the perfect killing machine. But she rejected her training and ran off to find her own way in life. Readers first met her in Batman #567 (written by Kelley Puckett and penciled by Damion Scott), when she assisted the Dark Knight and Oracle in the classic "No Man’s Land" storyline. For a time, Cassandra became Batgirl, then eventually Black Bat, but now goes by the codename "Orphan."

During her debriefing with Batman, Wonder Woman mentions how she had to patch her signal from the Javelin. The Javelin is a series of spaceships used by the League for intergalactic travel. The first model was seen in the 2001 Justice League animated episode “In Blackest Night”. 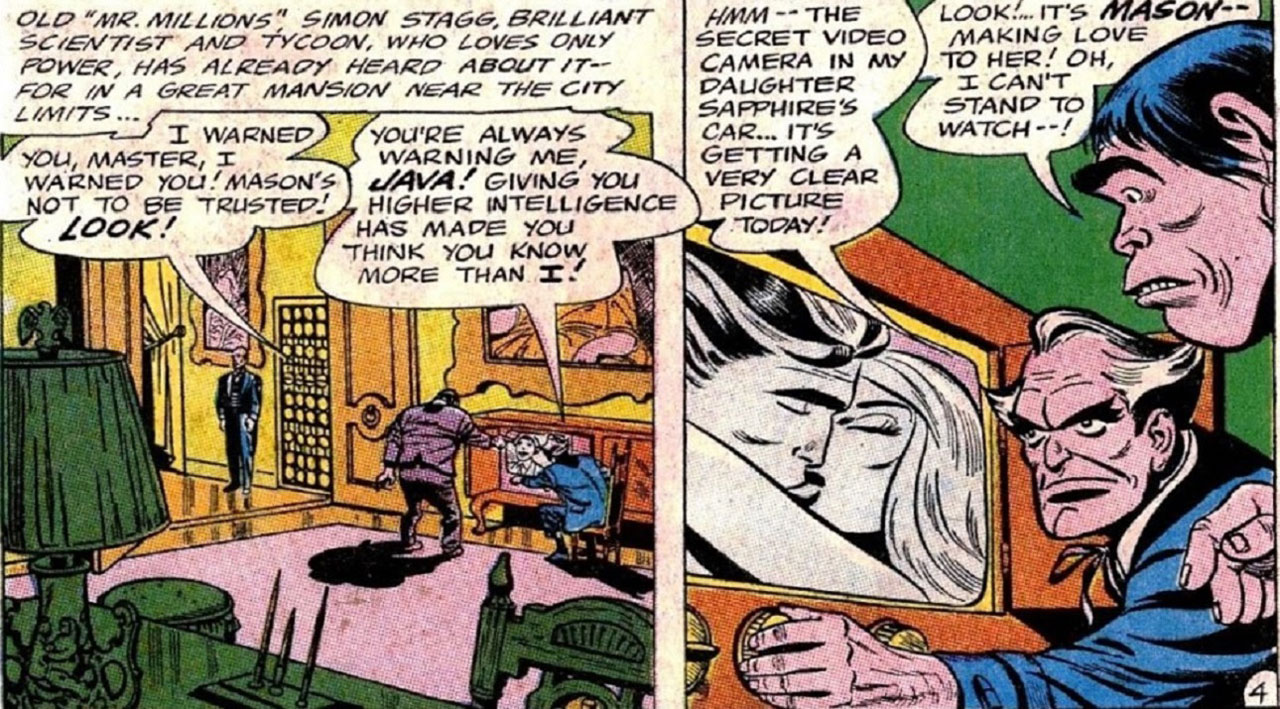 This week, the team learned of the manipulative madman tycoon Simon Stagg. In the comics, Simon is a frequent nemesis of Metamorpho, and he’s often tried to sabotage the hero’s relationship with his daughter Sapphire. Simon first appeared in Brave and the Bold #57 (written by Bob Haney and penciled by Ramona Fradon). Did you get a good look at the two cops who arrested him? They had a striking resemblance to Harvey Bullock and Renee Montoya, two of Gotham City’s most famous cops. 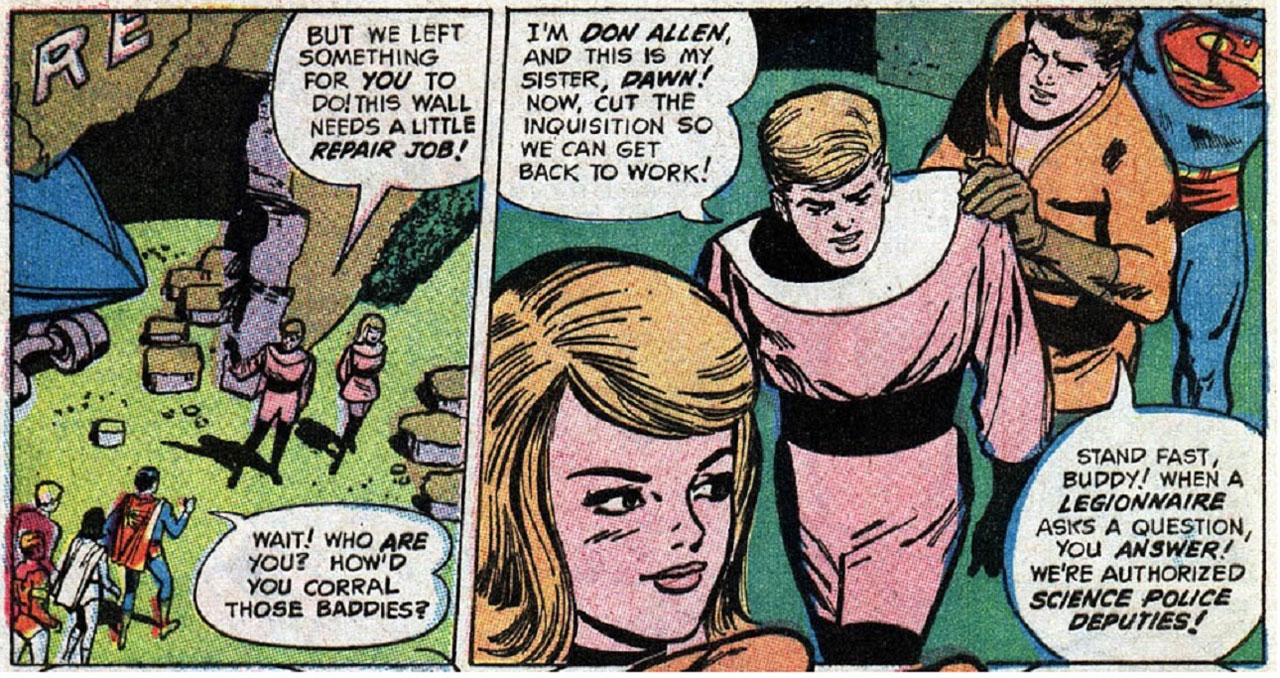 The “parents of superhero children” support group scene in “Home Fires” was a treasure trove of comic book Easter eggs! Let’s do a quick breakdown of the participants...

Traya Sutton  – Traya is the adopted Bialyan daughter of John Smith, the Red Tornado’s human alias. She was first seen in Justice League of America #152 (written by Gerry Conway and penciled by Dick Dillin). Traya was a regular character in the original Young Justice comic.

Don and Dawn Allen – The twin children of Barry Allen and Iris West-Allen. Bart had previously spoiled the pregnancy by announcing it prematurely in “Bloodlines”. The kids grow up to become the superhero duo the Tornado Twins, hence Bart’s “Tornado Toddlers” nickname for them. They were first seen in Adventure Comics #373 (written by Jim Shooter and penciled by Jim Shooter and Win Mortimer).

Jon Kent – Jon is the son of Lois Lane and Clark Kent. He first appeared in Convergence: Superman #2 (story and art by Dan Jurgens). Jon operates as Superboy in current comics continuity.

Jennifer and Anissa Pierce – The children of Black Lightning and his ex-wife Lynn Stewart. Previously discussed in our rundown for the Easter eggs in episodes 1-3.

Artur – Artur is the son of Aquaman and Mera. He’s based on Arthur Curry Jr., a.k.a. Aquababy, who was born in Aquaman #23 (written by Henry Boltinoff and penciled by Nick Cardy). Although Shiva was able to spare Artur in this episode, he didn’t survive toddlerhood in the comics. Black Manta suffocated the child in Aquaman #60. In this episode, even Artur’s choice of reading material is an Easter egg -- a comic called “Blue Falcon and Dynomutt”, based on the 1970s Hanna-Barbera cartoon.

Lian – Lian Harper is the daughter of Roy “William” Harper and Jade Nguyen. She’s been an established character on the show since Young Justice: Invasion. She first appeared in New Teen Titans #21 (written by Marv Wolfman and penciled by Eduardo Barreto).

Amistad Ervin – Amistad is the son of Raquel Ervin, a.k.a. Rocket. He first appeared in Icon #24 (written by Dwayne McDuffie and penciled by Mark Bright). 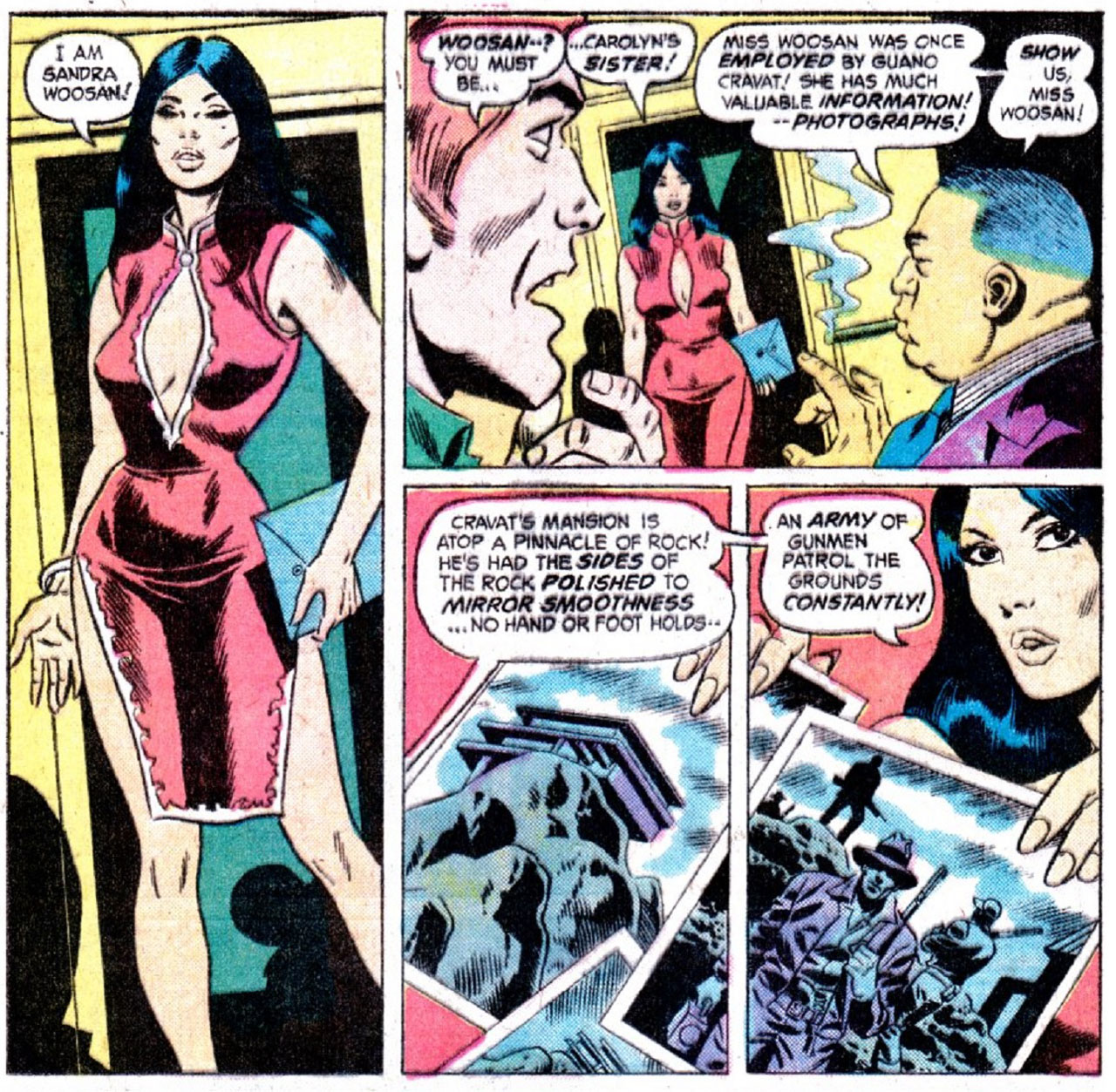 In “Home Fires”, we meet the newest member of the Light -- Lady Shiva. Shiva is one of the DC Universe’s best fighters, and has routinely given Batman a run for his money. She first appeared in the pages of Richard Dragon, Kung-Fu Fighter #5 (written by Denny O’Neil and penciled by Ric Estrada).

What were your favorite Easter eggs in this week's episodes? Did you catch any we missed? Let us know in our Community!