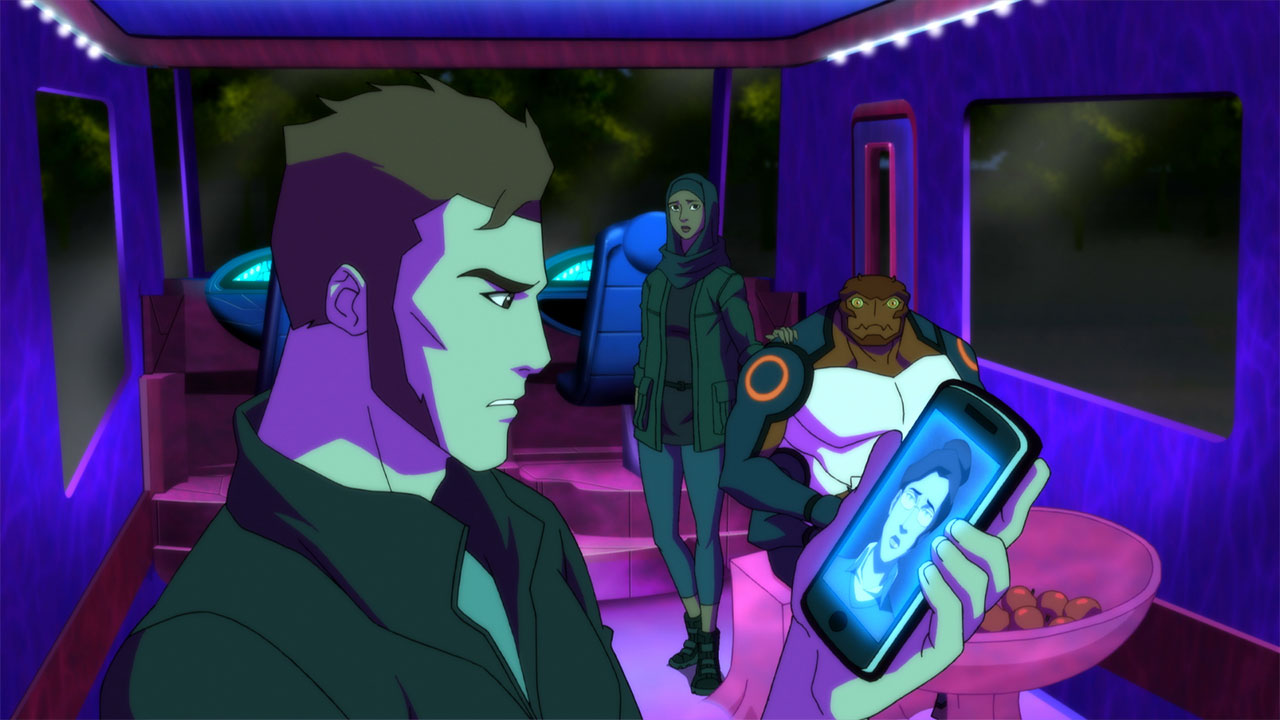 All the Easter Eggs in YOUNG JUSTICE: OUTSIDERS Episodes 4-6

DC Universe's Young Justice: Outsiders continued this week with three new episodes (“Private Security” “Away Mission” and “Rescue Op”), and each was filled with some great comic book references and Easter eggs! Let’s break them down… 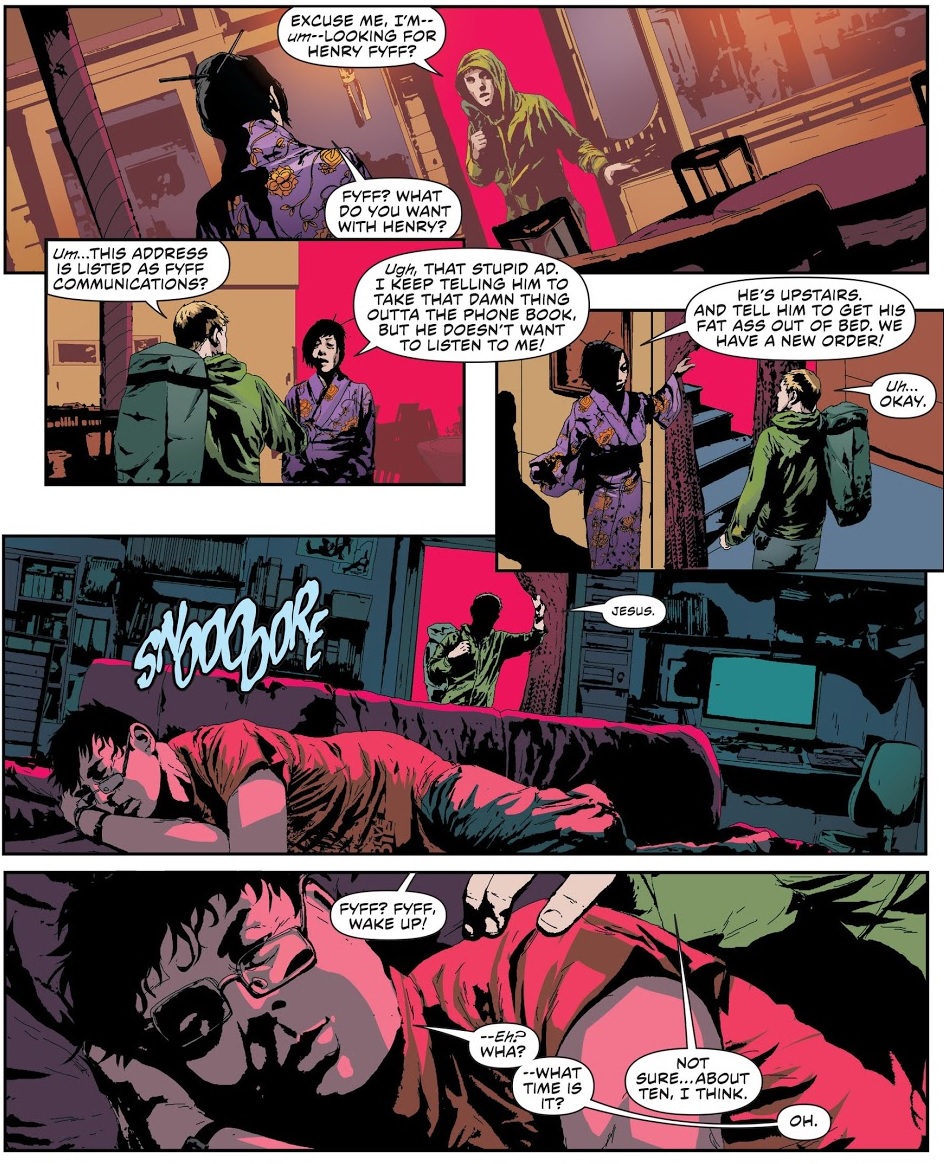 Did anybody get a good look at the distracted gamer who tripped in front of Artemis and Halo? That man is none other than Henry Fyff, an ally of Oliver Queen who first appeared in 2011's Green Arrow #18 (written by Jeff Lemire and penciled by Andrea Sorrentino, read Green Arrow #18 here). Henry was a disgraced employee of Oliver’s who got a second chance as technical support for Team Arrow. Let’s hope he learns to look where he’s going this time around. 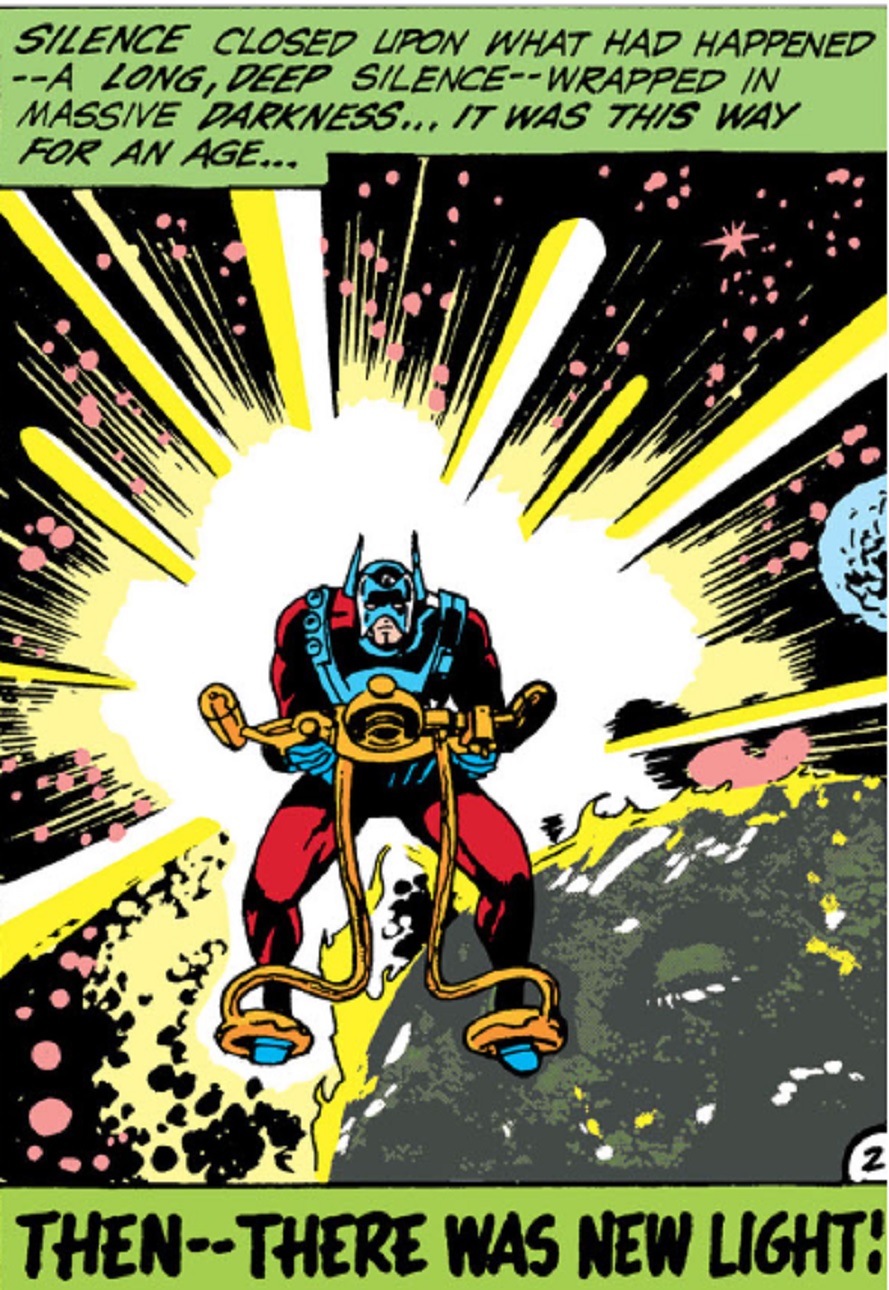 Young Justice: Outsiders also introduced its version of Orion -- champion of New Genesis and sworn enemy of Apokolips. Orion, who was revealed to be the son of the evil ruler Darkseid, was first introduced in New Gods #1 (written and penciled by Jack Kirby, read New Gods #1 here). It was later revealed that the Orion we met this week was actually… 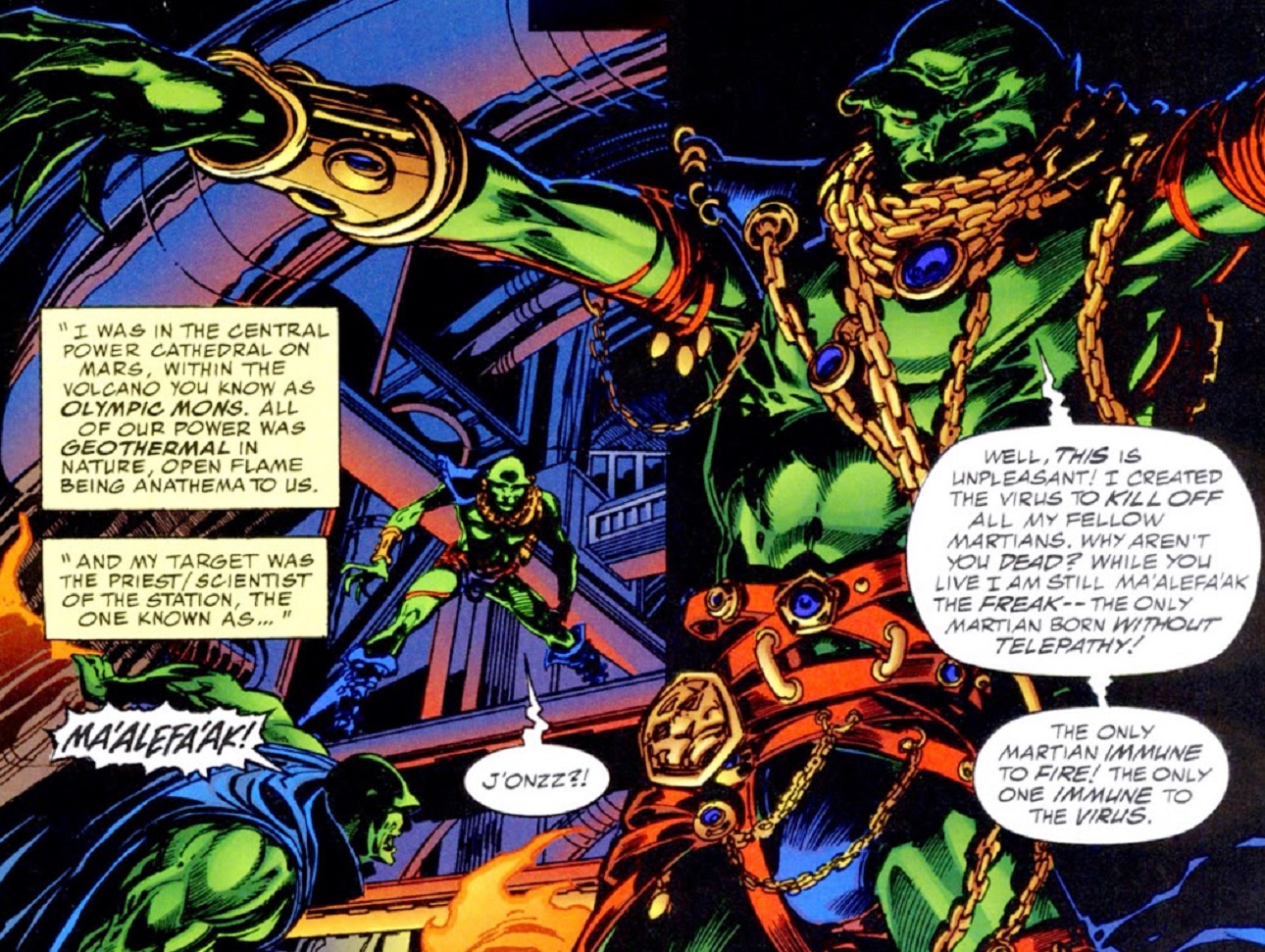 Although he's a White Martian in Young Justice, the comic-book version of Ma’alefa’ak was a Green Martian. And instead of being M’gann’s brother, he was J’onn’s. Readers first met Ma’alefa’ak in Martain Manhunter #0 (written by John Ostrander and penciled by Tom Mandrake). Ma’alefa’ak abused his psychic powers, so they were stripped from him. As a result, he grew bitter and engineered events to assist in the genocide of his own people. He then impersonated his brother J’onn and tried to ruin his good name by attacking the Justice League. And you thought your brother was annoying...

Bonus: Ma’alefa’ak mentions “a superstitious and cowardly lot," which was the phrase Batman first used to describe criminals when the Dark Knight's origin was first revealed in Detective Comics #33 (written by Gardner Fox and penciled by Bob Kane, read Detective Comics #33 here). 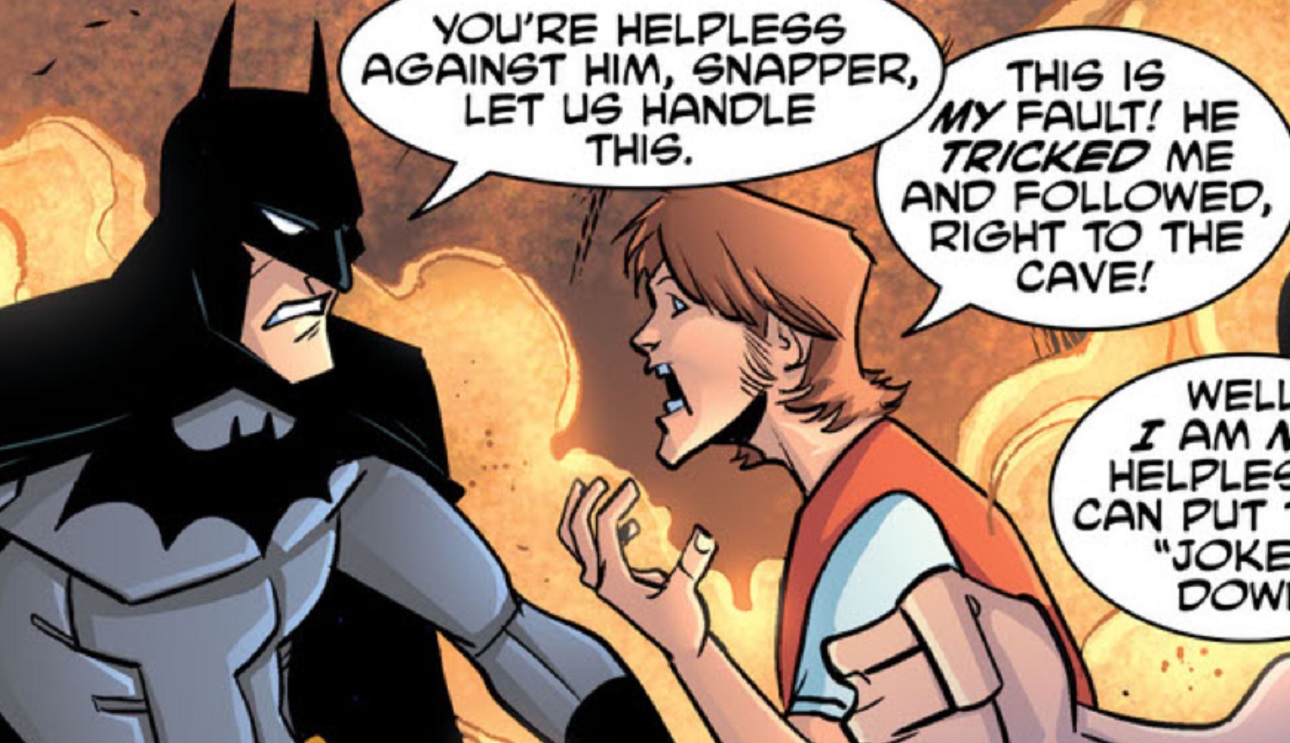 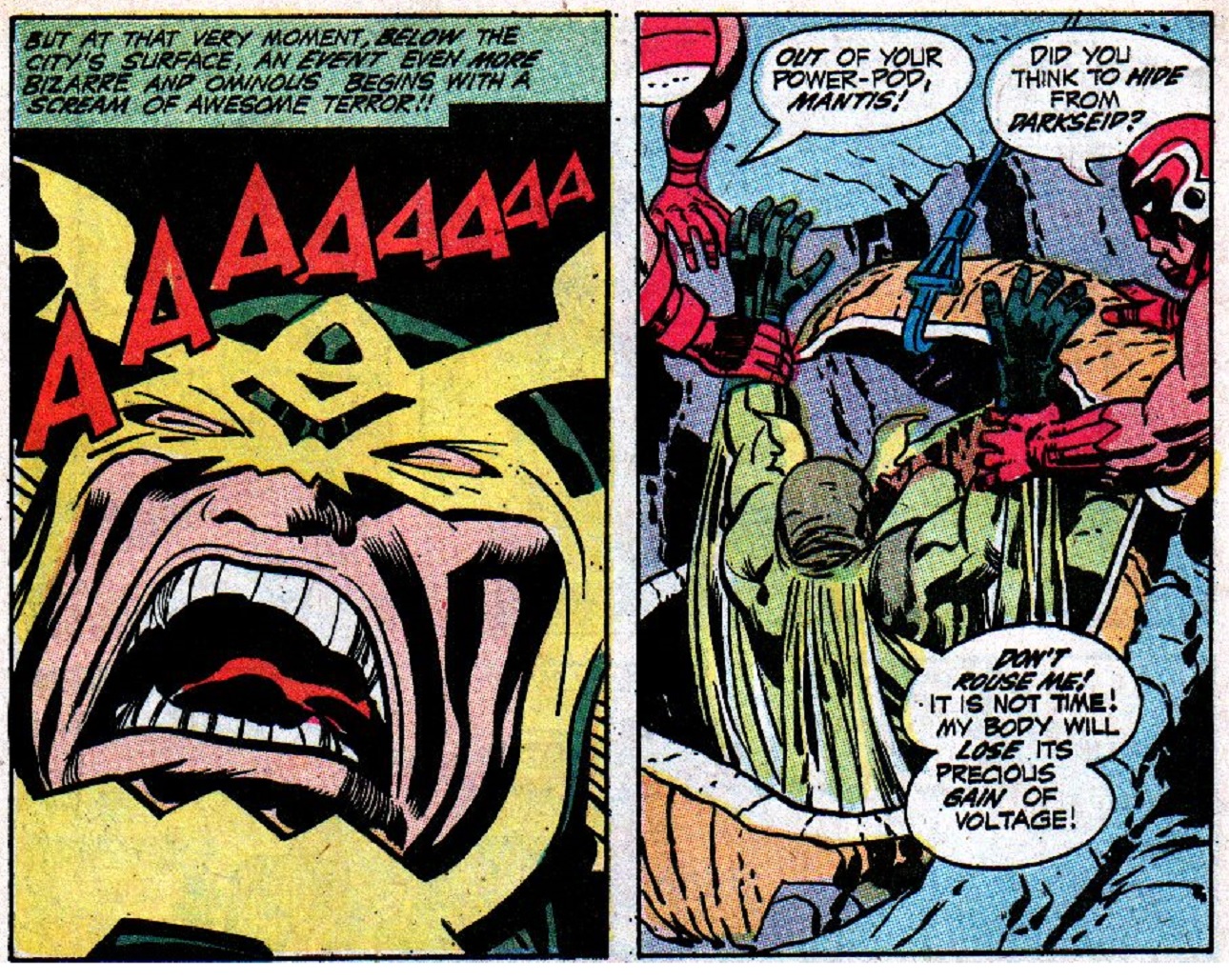 This week viewers met the insectoid Mantis. Comic readers were introduced to Mantis in 1971's The Forever People #2 (written and penciled by Jack Kirby). While the Young Justice: Outsiders version of Mantis is a bit of a jerk, his comic counterpart was even worse. He wound up working for Darkseid and battling the heroes of the DC Universe in his master’s quest for power. 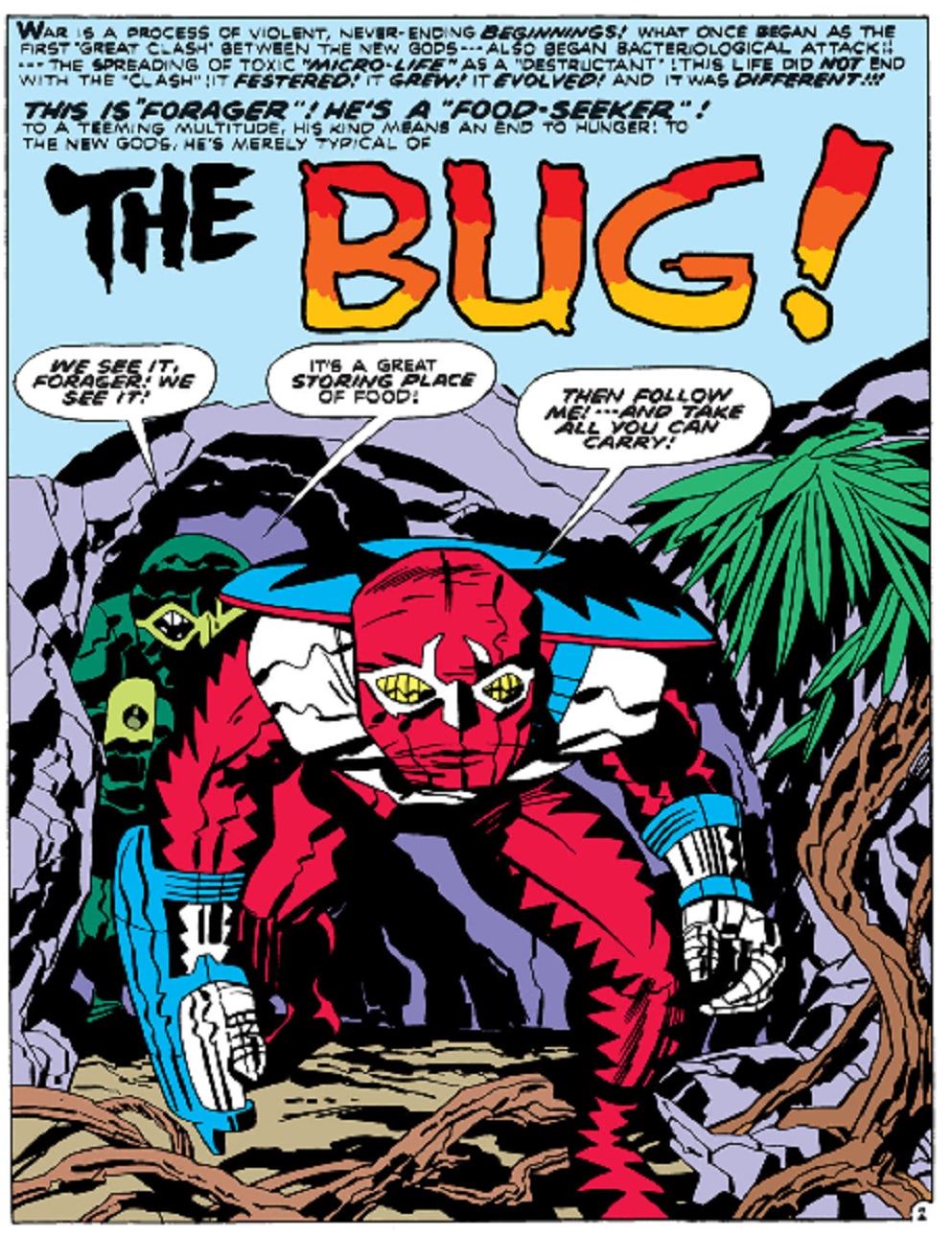 The newest member of Dick Grayson’s “outsider-team” was introduced in 1972's New Gods #9 (written and penciled by Jack Kirby, read New Gods #9 here). Forager’s comic-book counterpart is more humanlike and has fewer arms and a better use of pronouns. Forager has often assisted the New Gods in protecting New Genesis from the warring forces of Apokolips.

In Halo’s flashbacks she recalls a hostile man telling her to go back to Quarc. That man is Wilhelm Vittings, who would become Prime Minister of Markovia in Outsiders #21 (written by Mike W. Barr and penciled by Jim Aparo). Wanting to ensure his victory, Vittings got the Psycho-Pirate to manipulate his opponent into committing suicide! 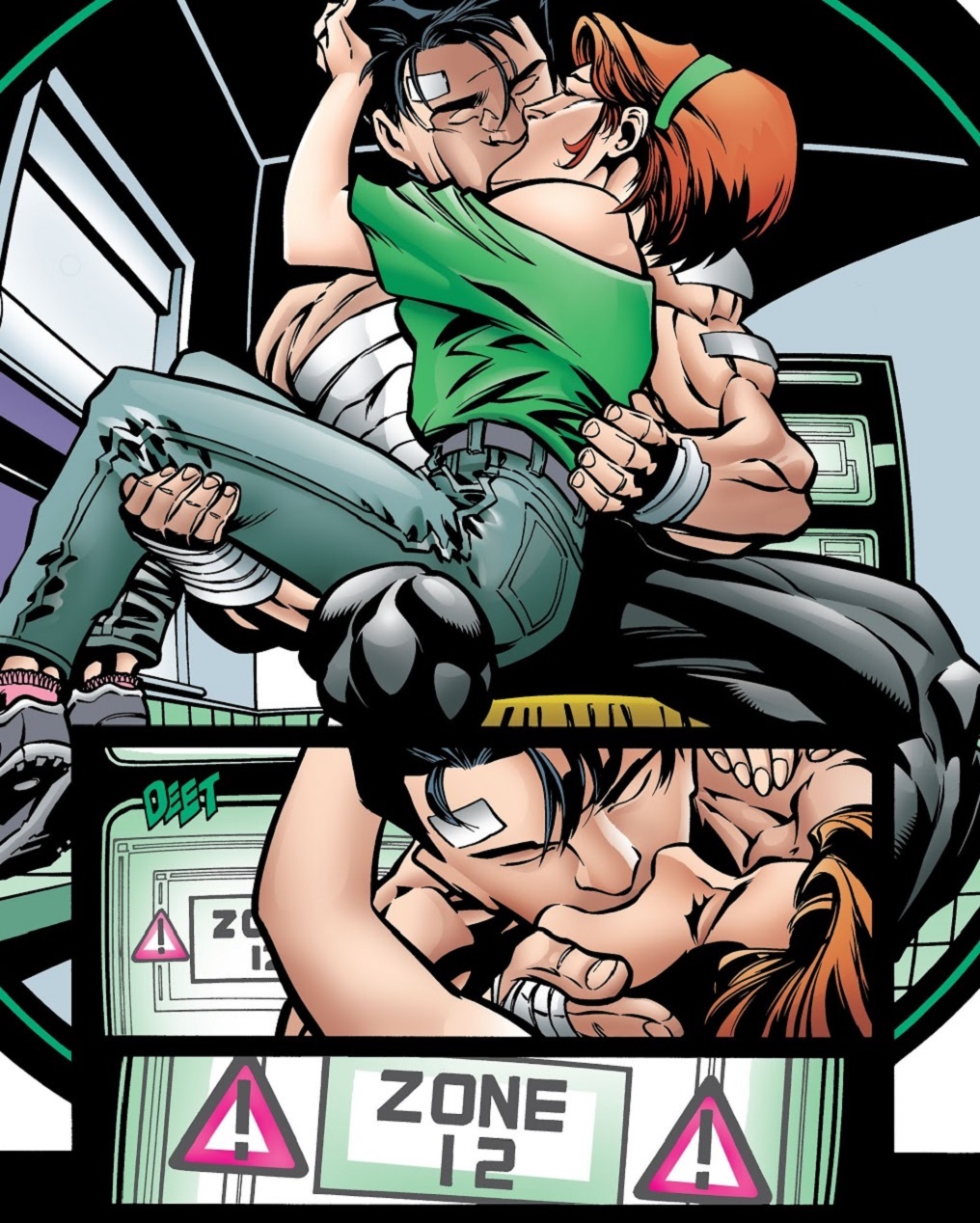 It appears that the animated versions of Dick Grayson and Barbara Gordon are now in a relationship, which is delighting shippers all over the internet. Barbara and Dick shared their first kiss in 1975's Batman Family #1 (written by Elliot S. Maggin and penciled by Mike Grell), when Batgirl used the embrace to shut the Boy Wonder up. Dick developed a crush on Babs after that, but when he confessed his feelings to her in Batman Family #13 (written by Bob Rozakis and penciled by Don Newton), Barbara pretended she was asleep. Ouch! Years later they grew closer, and they finally gave in to their feelings for each other during Gotham’s "No Man’s Land" crisis in Nightwing #38 (written by Chuck Dixon and penciled by Scott McDaniel). Barbara accepted Dick’s marriage proposal in Nightwing #117 (written by Devin Grayson and penciled by Brad Walker), but she ended things and told him to take some time to figure out their lives in Nightwing Annual #2 (written by Marc Andreyko and penciled by Joe Bennett). Let’s hope their animated versions are able to work things out! 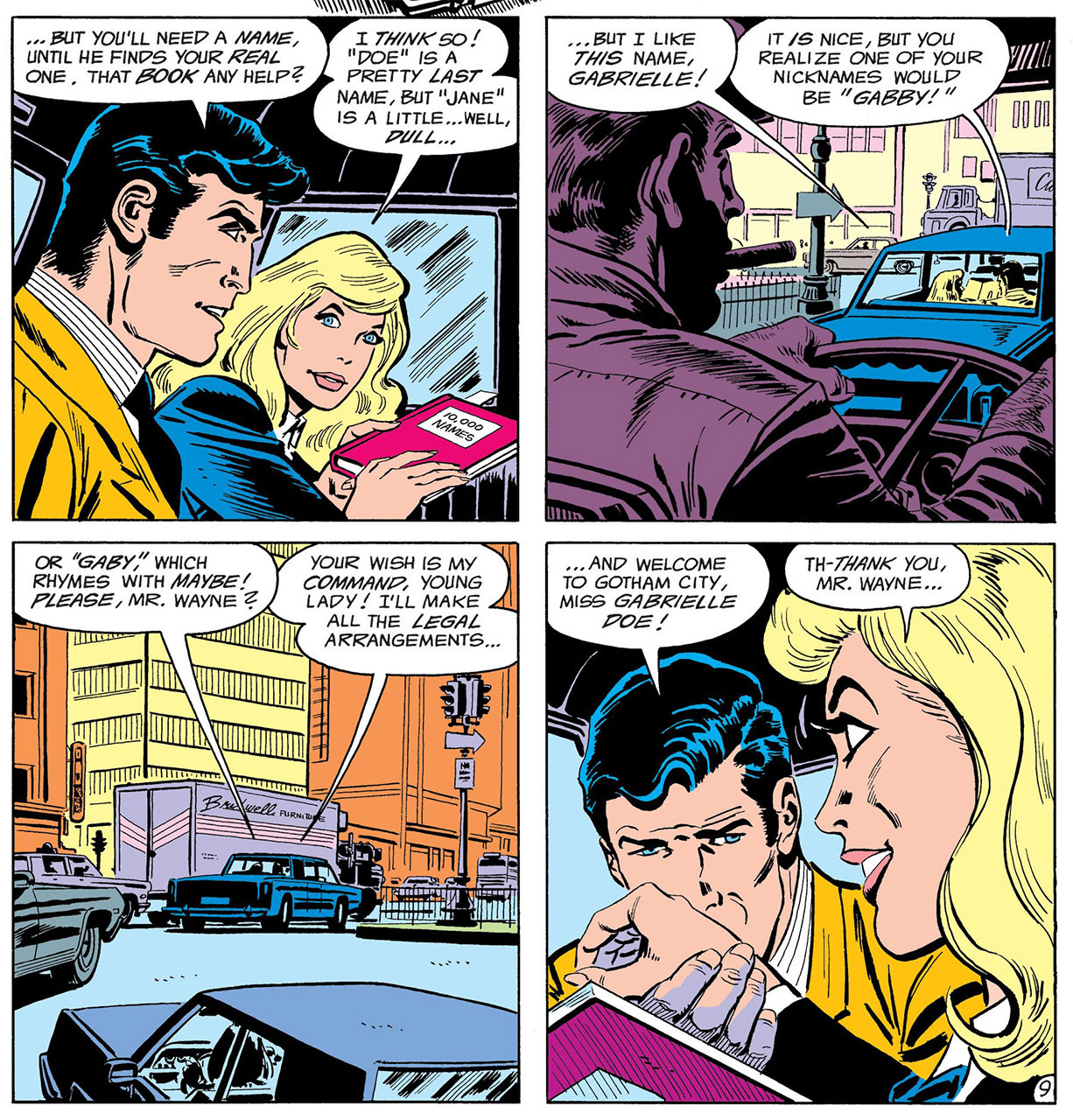 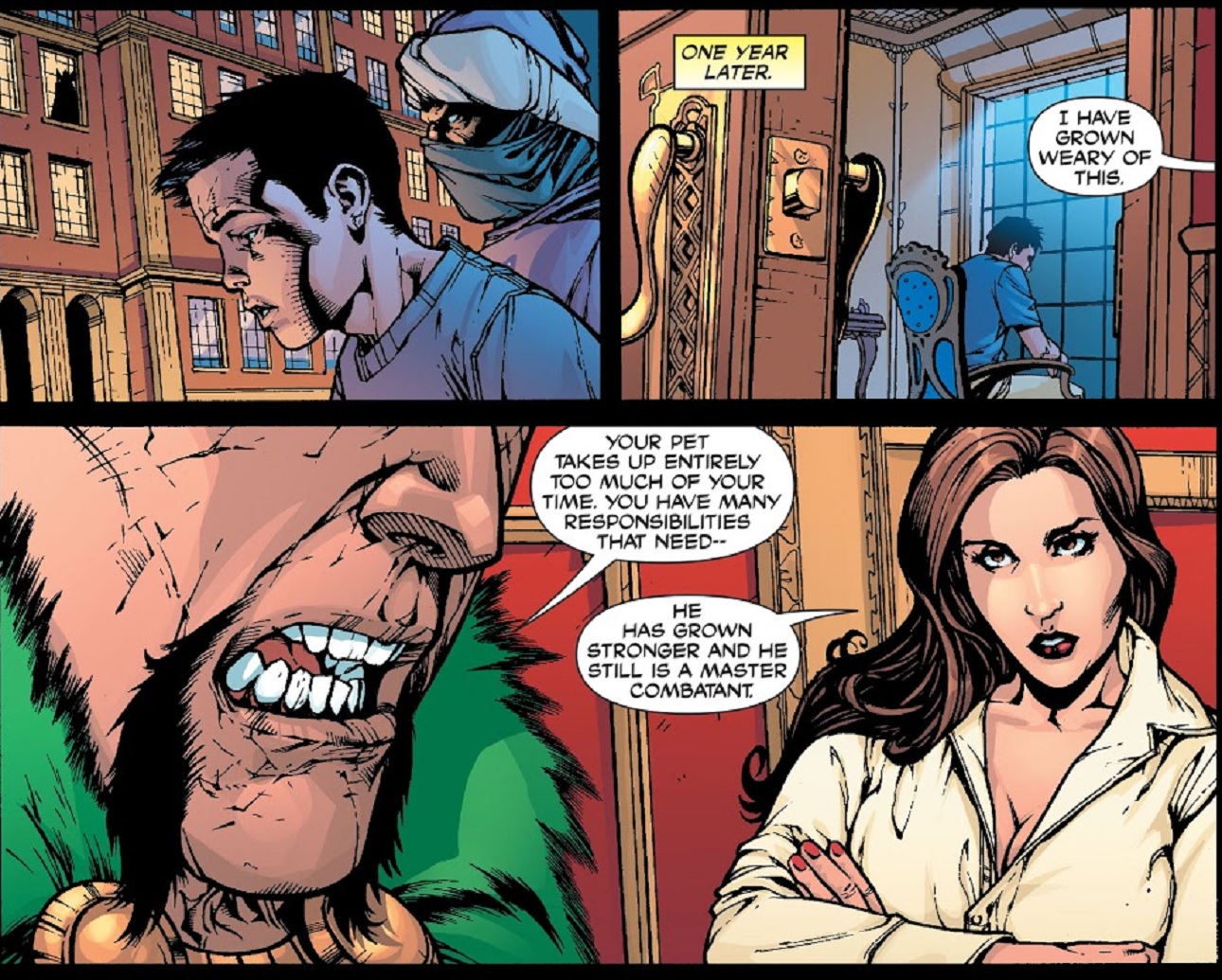 While confronting Ra’s Al Ghul, the team spars with a mysterious red-hooded ninja who seems familiar with Dick Grayson. While the episode doesn’t give us any official confirmation, there is a strong indication that the man in Ra’s employ is none other than Jason Todd. Currently, the animated version of Jason Todd is assumed dead, and he has his own memorial in the Justice League’s Watchtower. 2006's Batman Annual #25 (written by Judd Winnick and penciled by Shane Davis, read Batman Annual #25 here) revealed that Ra’s Al Ghul and his daughter Talia took Jason in after his mysterious resurrection, following his murder at the hands of the Joker. At the time Jason was amnesiac, just like the red-hooded ninja is. Could it really be him?

Talia and the baby

As the Team is leaving Ra’s and his men behind, viewers can catch a glimpse of his daughter Talia holding a baby. Although this is Talia’s first appearance in the Young Justice cartoon, she has previously been seen in the tie-in comic, starting in Young Justice #11 (written by Greg Weisman and penciled by Chris Jones, read Young Justice #11 here). The comics version of Talia first appeared in Detective Comics #411 (written by Denny O’Neil and penciled by Bob Brown). She constantly found herself torn between her love for Batman and loyalty to her father. In the Son of the Demon graphic novel (written by Mike W. Barr and penciled by Jerry Bingham), Ra’s and Batman formed an uneasy alliance, allowing the Dark Knight and Talia to give in to their romantic desires. Talia became pregnant, but lied to Batman and said she lost the baby. Years later, in Batman #655 (written by Grant Morrison and penciled by Andy Kubert, read Batman #655 here), Talia formally introduced Batman to their son Damian. Damian is currently serving as Robin and leads the Teen Titans.

Which Easter eggs from the latest Young Justice: Outisders episodes are your favorites? Let us know in our Community!