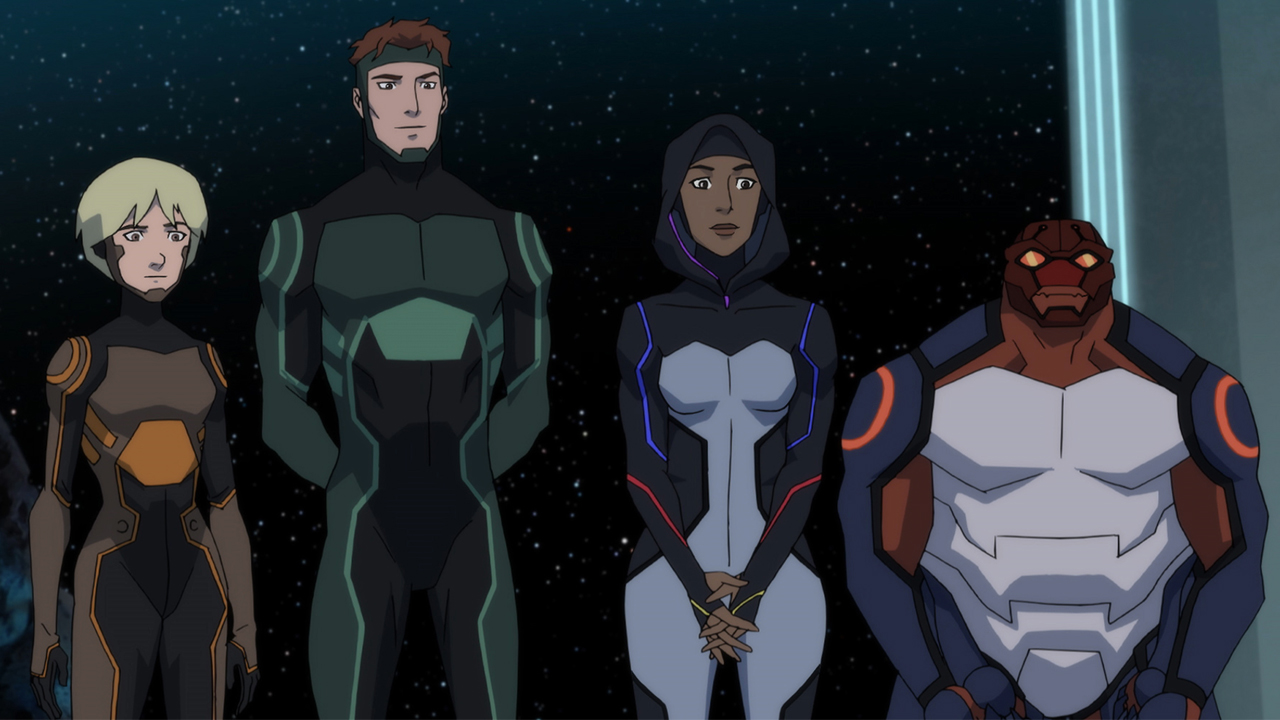 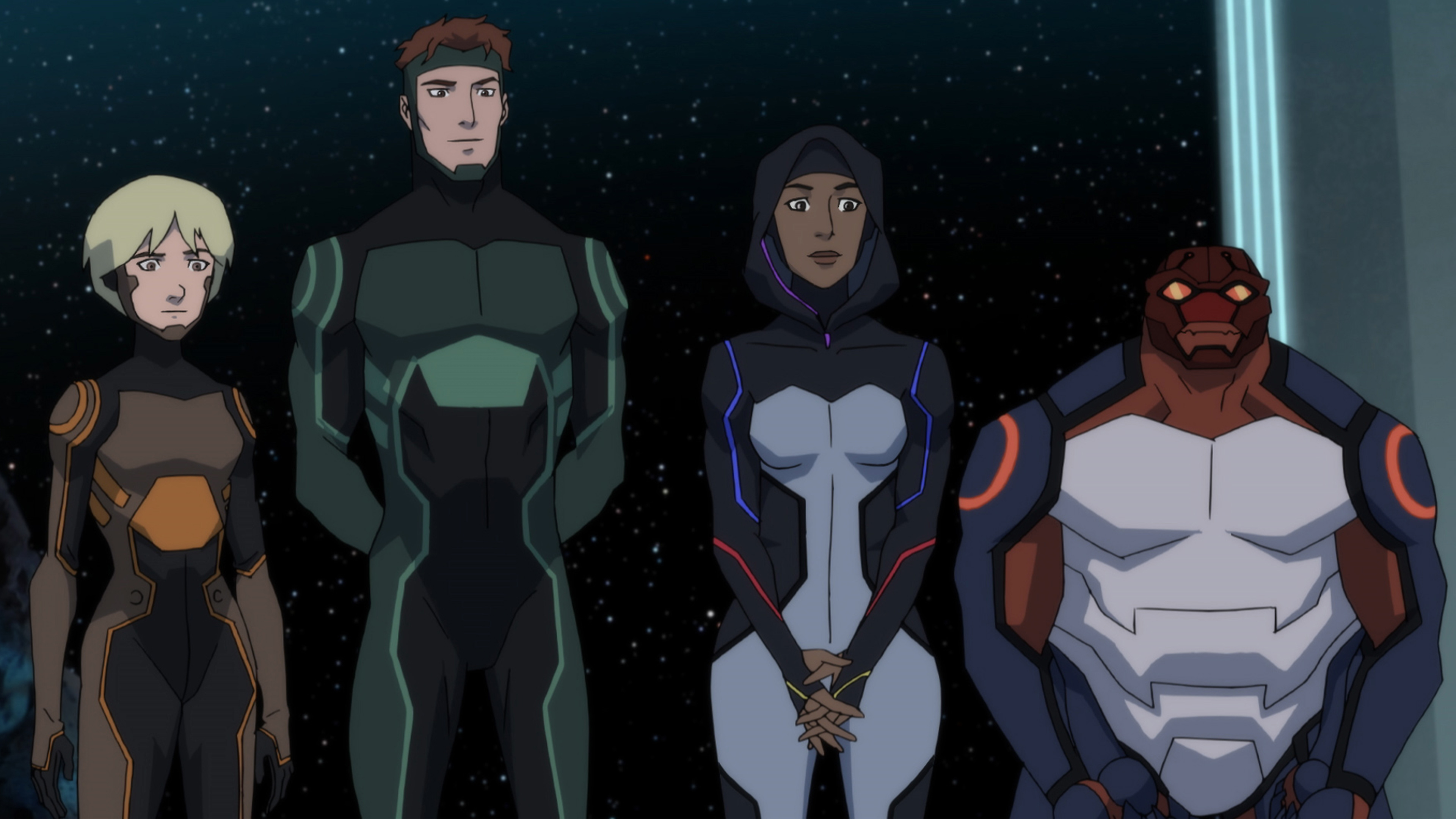 All the Easter Eggs in YOUNG JUSTICE: OUTSIDERS Episodes 14-16

The wait is over, and our favorite heroes are back! ‘Young Justice: Outsiders’ has returned for a summer of new episodes and it’s enough to make any DC fan feel absolutely whelmed! With three episodes to enjoy (“Influence”, “Leverage” and “Illusion of Control”) upon the show's return, there are triple the amount of Easter eggs and obscure comic book references to enjoy this week! So, let’s crash the mode and check out how these episodes paid tribute to the rich mythology of DC Comics... 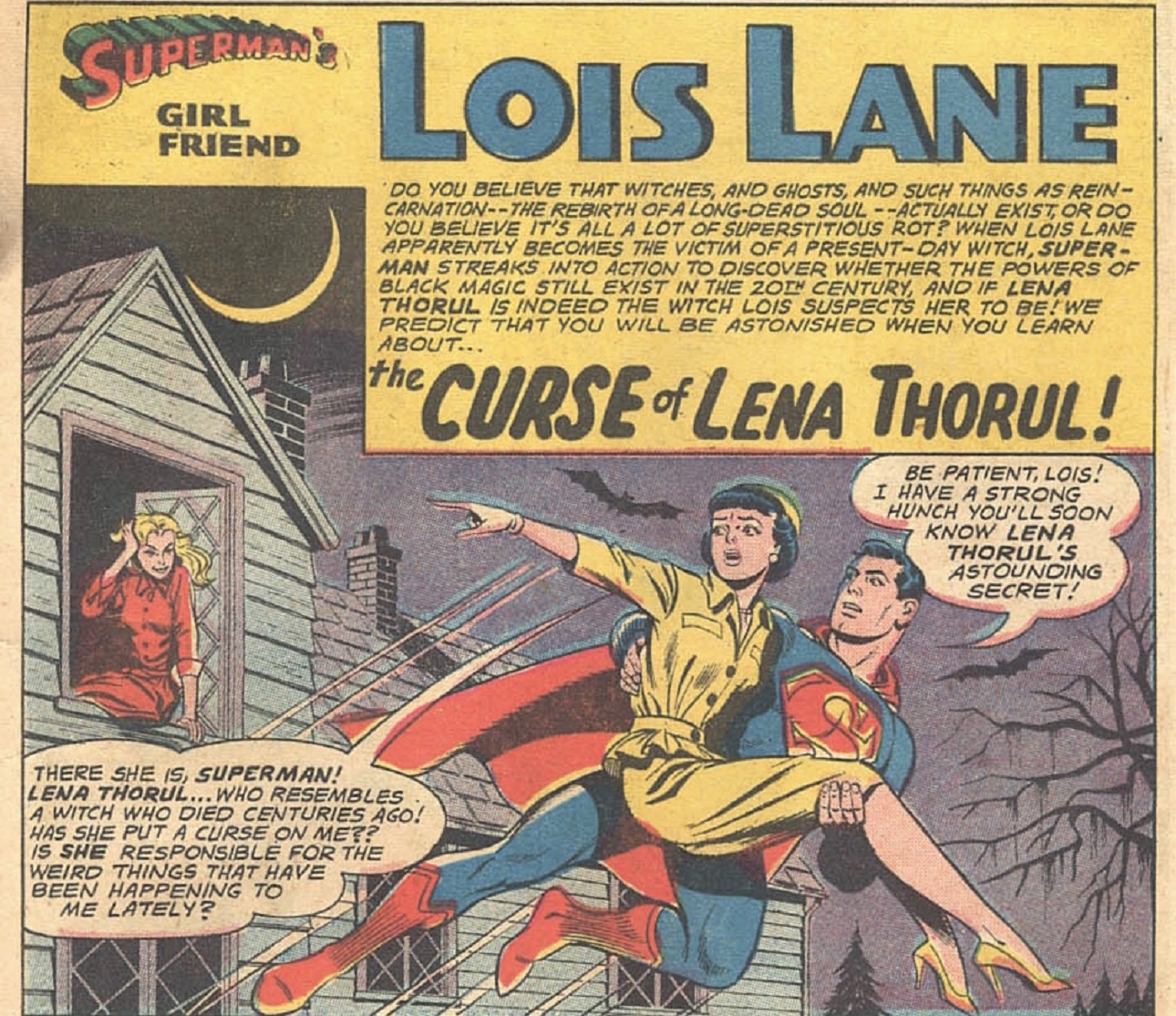 G. Gordon Godfrey’s show may be filled with anti-superhero propaganda, but during the episode “Influence,” his program was ground zero for a series of DC Comics Easter eggs! While Godfrey was doing his usual JLA bashing, a logo appeared on the screen identical to the one from the 2001 ’Justice League’ animated series. His playful question “Who watches the Watchmen” was part of an advertisement campaign DC used to promote their groundbreaking ‘Watchmen’ saga in the 1980’s. Godfrey also spiced things up by displaying social media postings that echoed his feelings on the League, but if you look closely at their handles, the tweets were from Captain Cold and the Condiment King. Both men can hardly be considered unbiased sources! We also learned that Lex Luthor’s business dealings were handed over to his sister Lena. This is our introduction to the ‘Young Justice’ version of Lena, who first appeared in ‘Superman’s Girlfriend, Lois Lane’ #23. Lena’s parents changed her last name from Luthor to Thorul to hide the shame they felt over her brother’s life of crime. The Thorul anagram didn’t fool everyone though and the secret was eventually exposed. In conclusion, Godfrey’s political talking points may be a tad extreme, but his show is still a fun place to go for DC references! 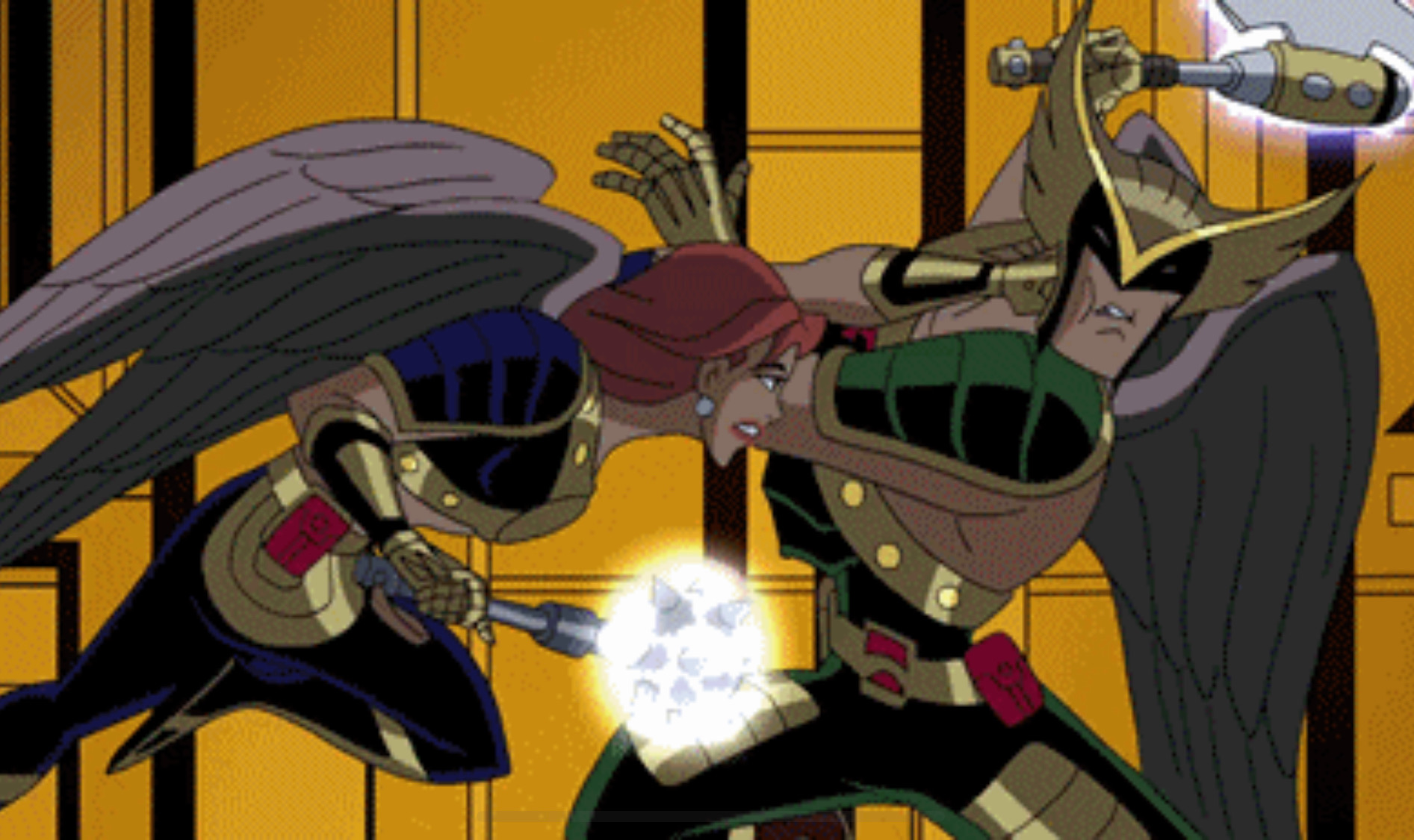 If you thought international relations were tricky, then imagine the minefield that intergalactic relations must be! The Justice League experienced that first hand during the episode “Influence” as they were angrily chided by a Thanagarian commander Hro Talak. It seems that Talak doesn’t have a good relationship with the League in any reality he’s in, as evident from his first appearance in the animated ‘Justice League’ episode “Starcrossed.” In the episode, Talak and his Thanagarian army attacked Earth. The Justice League were able to successfully repel the attack, leaving Talak defeated and humiliated. Talak’s name is an anagram of Katar Hol, who he was originally based on.

During Talak’s angry conversation with the League, he brings up Nth metal, an element that helps power the Thanagarians. Nth metal is native to their planet, and it’s used to make a wide variety of powerful weapons. The metal has been seen in the DC Universe since ‘Flash Comics’ (1940) #1. 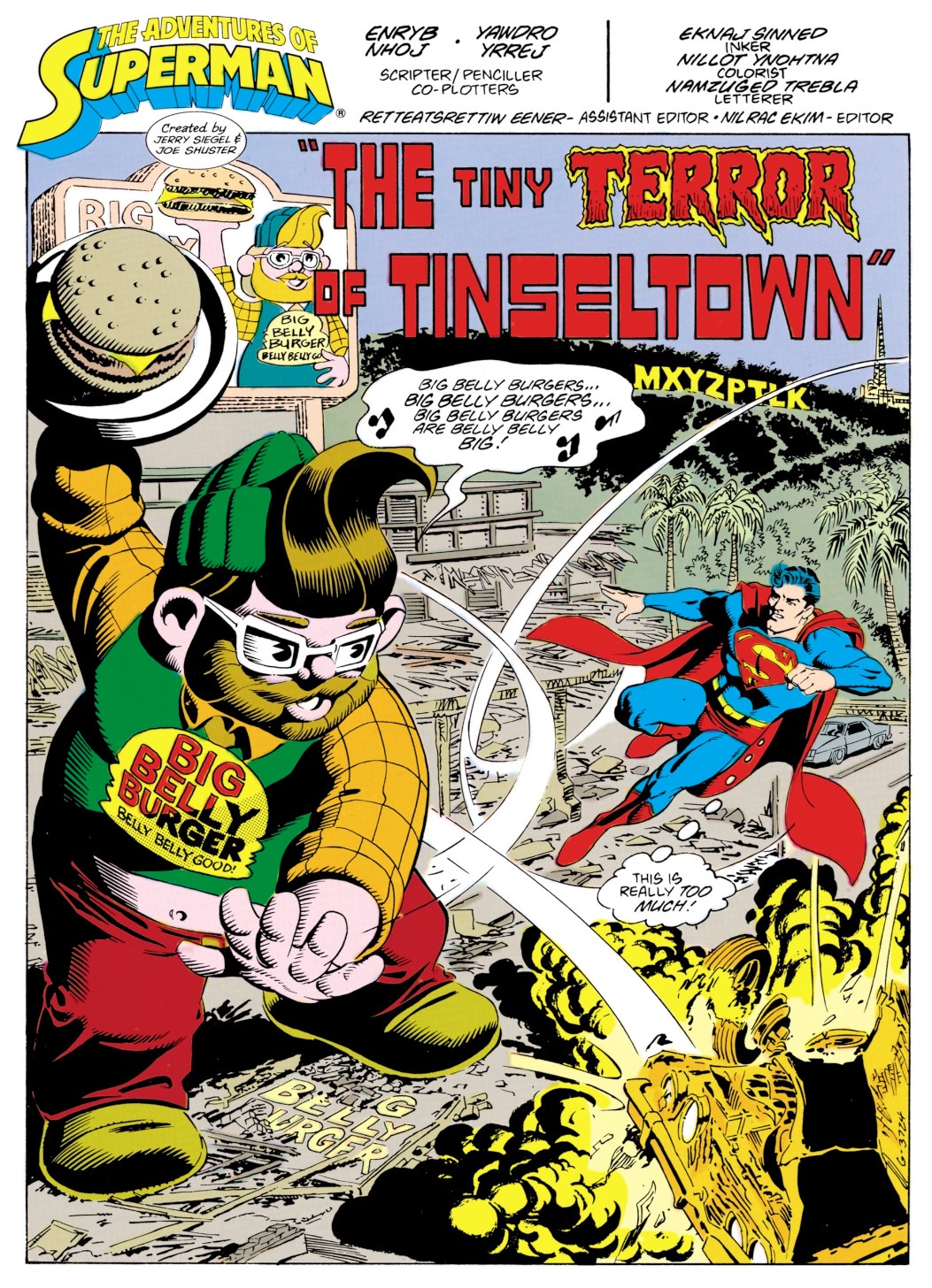 If you keep your eyes peeled during the episode “Influence,” you may have noticed a Big Belly Burger next to the vegan restaurant Gar was eating his lunch at. It seems like Beast Boy makes healthy eating choices since he overlooked the popular fast food joint in favor of something less greasy. Big Belly Burger was first seen in ‘Adventures of Superman’ (1987) #441 (written by John Byrne and Jerry Ordway, penciled by Jerry Ordway) and ever since then it’s made it’s way around all forms of DC Comics media. The fast food chain has been referenced in video games like ‘Arkham Origins,’ and on the television series ‘The Flash,’ Hunter Zolomon stated that every world in the Multiverse contains a Big Belly Burger franchise.

Angel and the Ape 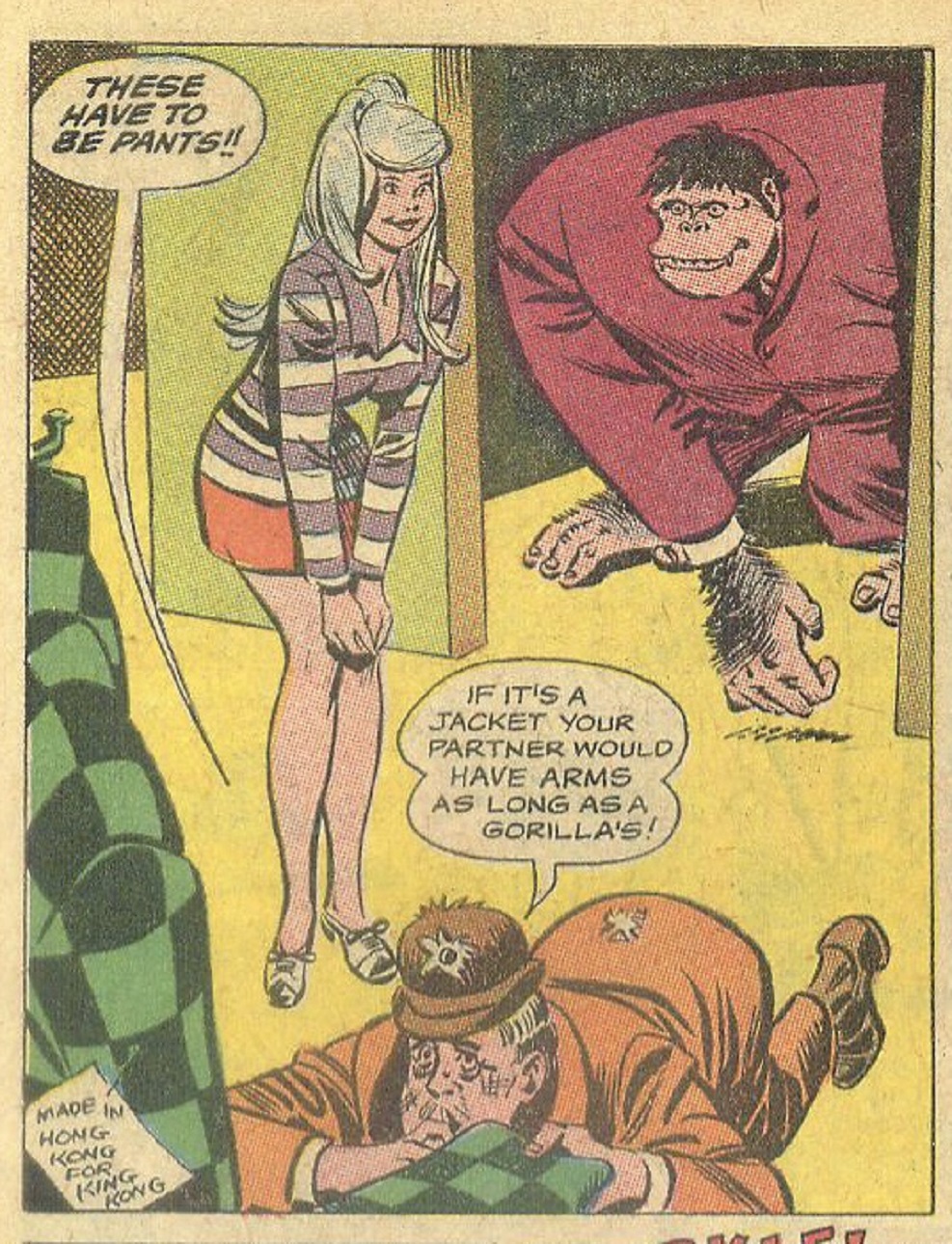 After enjoying his lunch, Gar saved an excited young woman from a thief. The excited citizen then took a selfie with Gar, who was still in his Gorilla form. It makes sense that Gar chose that form for their selfie, because that girl has a special place in her heart for Gorillas. Her name is Angel O’Day, and she first appeared back in ‘Showcase’ #77 (written by E. Nelson Bridwell and penciled by Bob Oksner). Angel is a private investigator, and her partner is an intelligent gorilla named Sam Simeon. The detective duo had their own short-lived series called “Angel and the Ape,” where they would solve mysteries, and encounter people who were startled to see a detective gorilla. Sam was later revealed to be Gorilla Grodd’s grandson, which makes sense since the DC Universe doesn’t have many talking gorillas. Angel O’Day can currently be found in Wonder Comics ‘Dial H for Hero’ revival.

Barda and the Female Furies 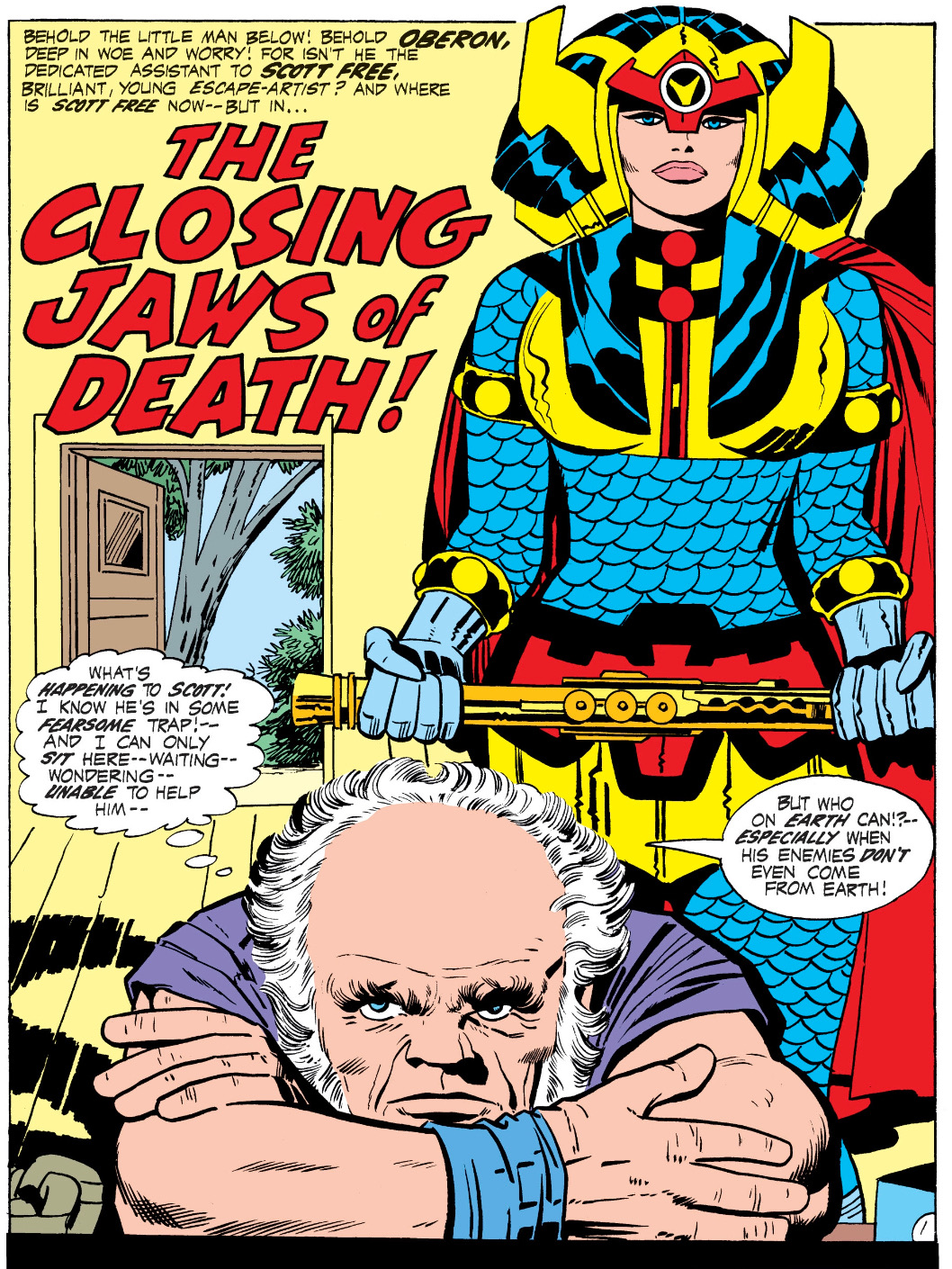 Beast Boy tried to warn everybody about Granny, but even he would’ve been shocked at what the League witnessed in the episode “Influence.” The Justice League found themselves on a satellite base known as the Orphanage, where Granny Goodness unleashed Big Barda and her Female Furies upon the heroes! Although the sequence wasn’t fun for the League, fans of Mister Miracle should get a kick out of it, since it utilizes many of the concepts from Jack Kirby’s run on the character. The Orphanage was first seen in ‘Mister Miracle’ (1971) #2 (story and art by Jack Kirby), where it was described as part fortress and part prison. Although the outside has a banner declaring “Granny Loves You,” the inside is full of children being tortured until Granny feels they’re ready to become soldiers. One of the mightiest soldiers of all is Big Barda, who first appeared in ‘Mister Miracle’ (1971) #4 (story and art by Jack Kirby and Joe Simon). Barda betrayed Granny after falling in love with Scott Free, the superheroic escape artist known as Mister Miracle. Granny was infuriated by Barda’s betrayal and has constantly sought to punish her former child by sending the Female Furies after her. The Female Furies are Granny’s fiercest warriors, and they’ve been plaguing the galaxy ever since their debut in ‘Mister Miracle’ (1971) #6 (story and art by Jack Kirby and Joe Simon). Things were a lot simpler when Granny was targeting the heroes with a VR helmet, but now that the Female Furies are in play, the Team better get ready for the fight of their life! 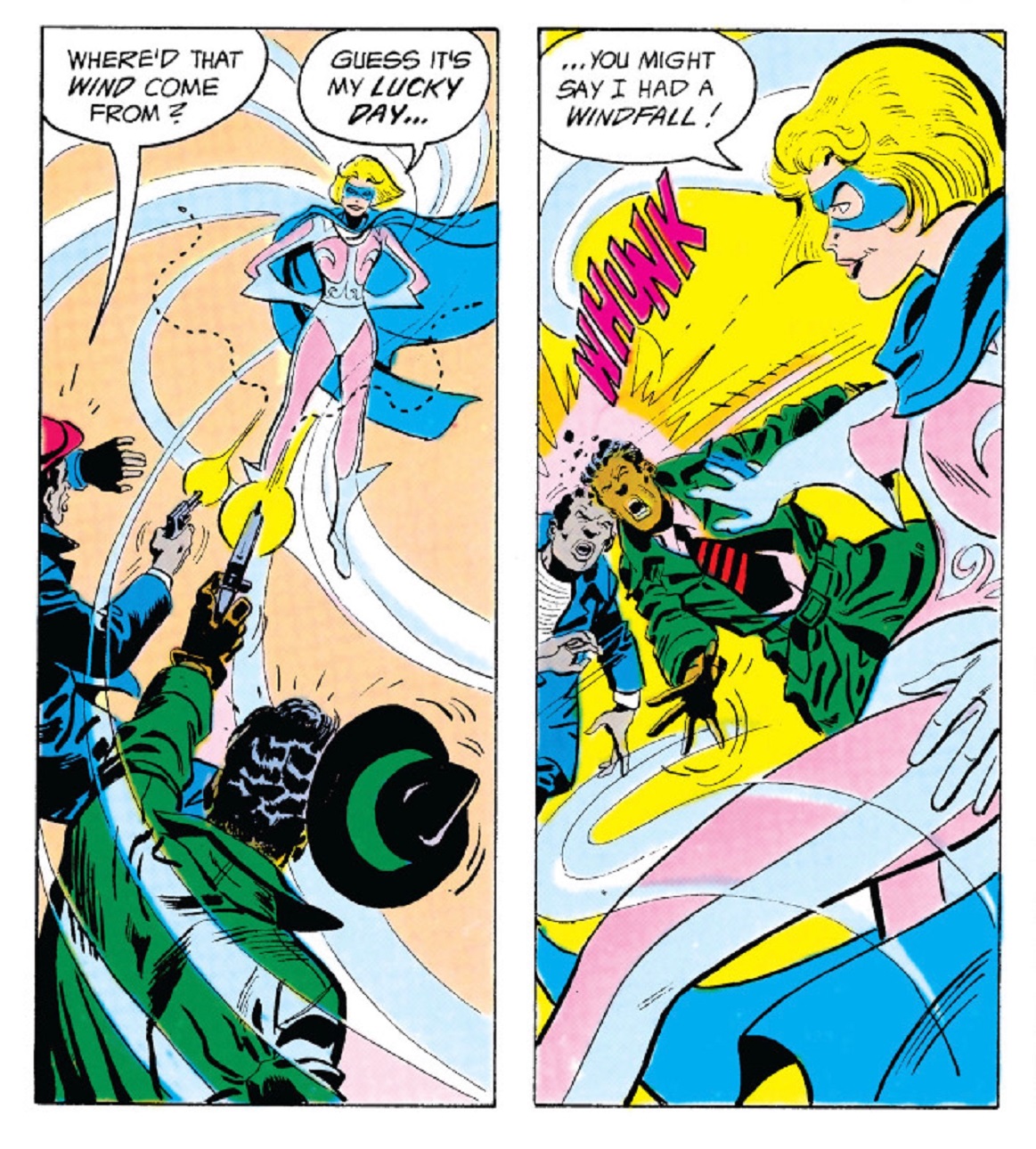 One of the reoccurring themes throughout the series has been youngsters coming to grips with their special abilities, and during the episode “Leverage” it was Wendy’s turn. Wendy originally appeared in ‘Batman and the Outsiders’ #9 (written by Mike W. Barr, penciled by Jim Aparo and Bill Willlingham) as a member of the supervillain group known as the Masters of Disaster. She operated under the persona of Windfall, and was usually cowed by her sister Becky, who was also a member of the group known as New Wave. The Masters of Disaster clashed with the Outsiders frequently, but Windfall was always hesitant to hurt them. Windfall formed a bond with Halo, despite being on opposite sides of the battlefield, but New Wave did everything she could to stunt the growing friendship.  Wendy eventually grew tired of her sister and joined the Outsiders. Halo was thrilled to have another teenage girl on the team, and the two girls enjoyed many light night slumber parties. After the Outsiders disbanded, Wendy enrolled in college where her life took a turn for the worse. A group of fraternity boys drugged and raped her, and when the college sided with the boys, Wendy angrily retaliated with her powers. After killing the boys who had abused her, Wendy was arrested, but Amanda Waller gave her a second chance by recruiting her to Task Force X. Sadly Windfall was killed in action in ‘Suicide Squad: Raise the Flag’ (2007) #7 (written by John Ostrander, penciled by Jesus Saiz, Javier Pina and Robin Riggs) after helping the team repel an attack by Chemo. And speaking of Task Force X… 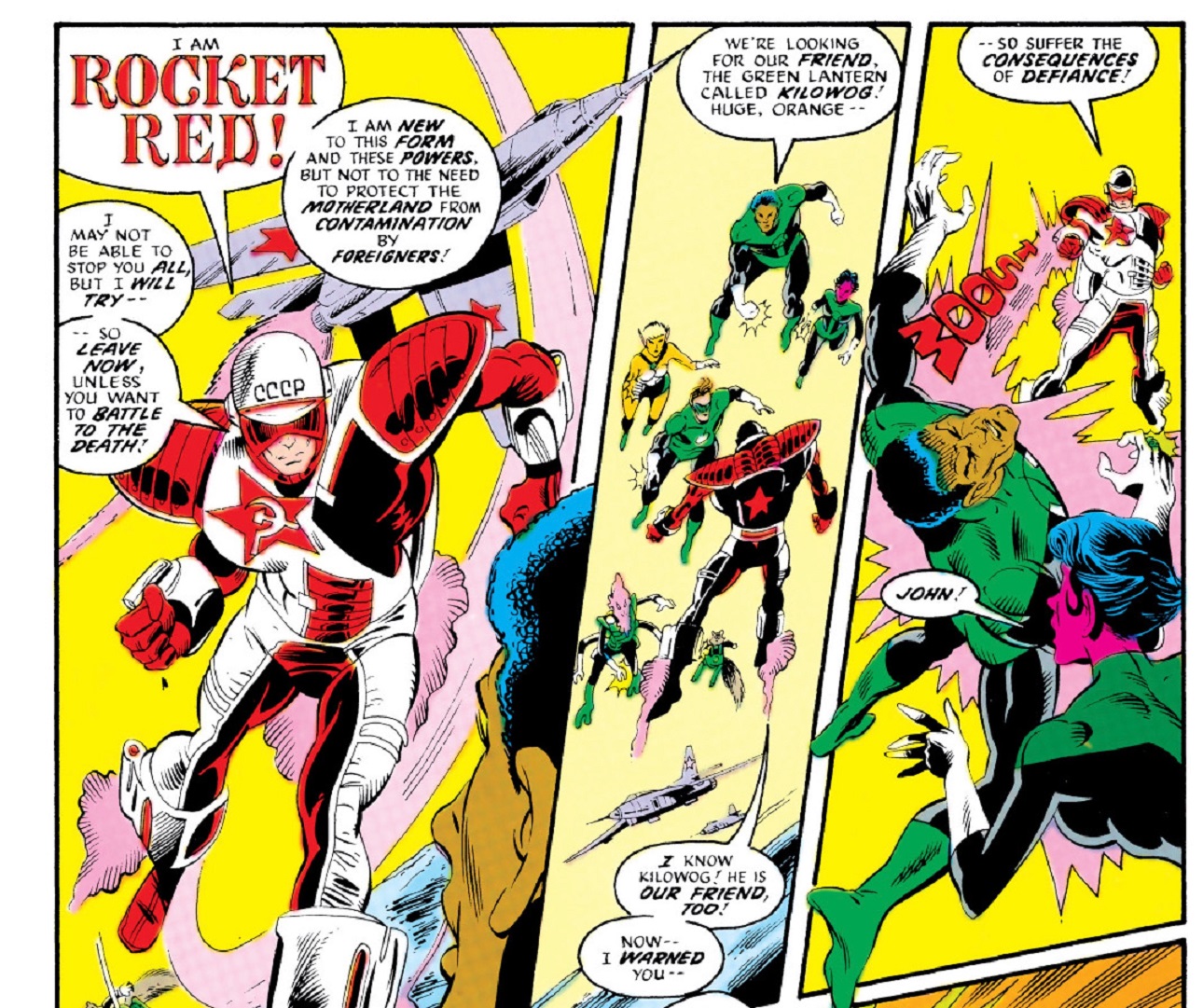 In the episode “Leverage,” the team embarks on a recon mission to Verhoyansk, where they find themselves caught between the Rocket Red Brigade and the Suicide Squad. Young Justice fanatics already know that this isn’t the teams first mission to Verhoyansk, as the group journeyed there in the ‘Young Justice: Legacy’ video game. The Rocket Red Brigade first appeared in ‘Green Lantern Corps’ (1986) #208 (written by Steve Englehart and penciled by Joe Staton) where they were developed as the Soviet Union’s response to the rise of American superheroes. The Green Lantern known as Kilowag had a soft spot for Communism, so he assisted the USSR by helping them develop the Red Rocket suits of armor. Dmitri Pushkin, the armored man seen in this episode, was one of the most notable members of the Brigade. Pushkin joined the Justice League, where he developed a strong friendship with Animal Man.

Task Force X is another group with a storied history. The team originally appeared in ‘The Brave and the Bold’ #25 (written by Bob Kanigher and penciled by Ross Andru), where their choice of dangerous missions earned them the nickname Suicide Squad. The group was led by Rick Flag, who was mentioned during the debriefing in this episode. The Suicide Squad was revamped in the limited series ‘Legends’ after Amanda Waller revived the Task Force X program, and began using incarcerated criminals as recruits. With three different teams trading blows in Verhoyansk, it’s a miracle everyone got out unscathed. 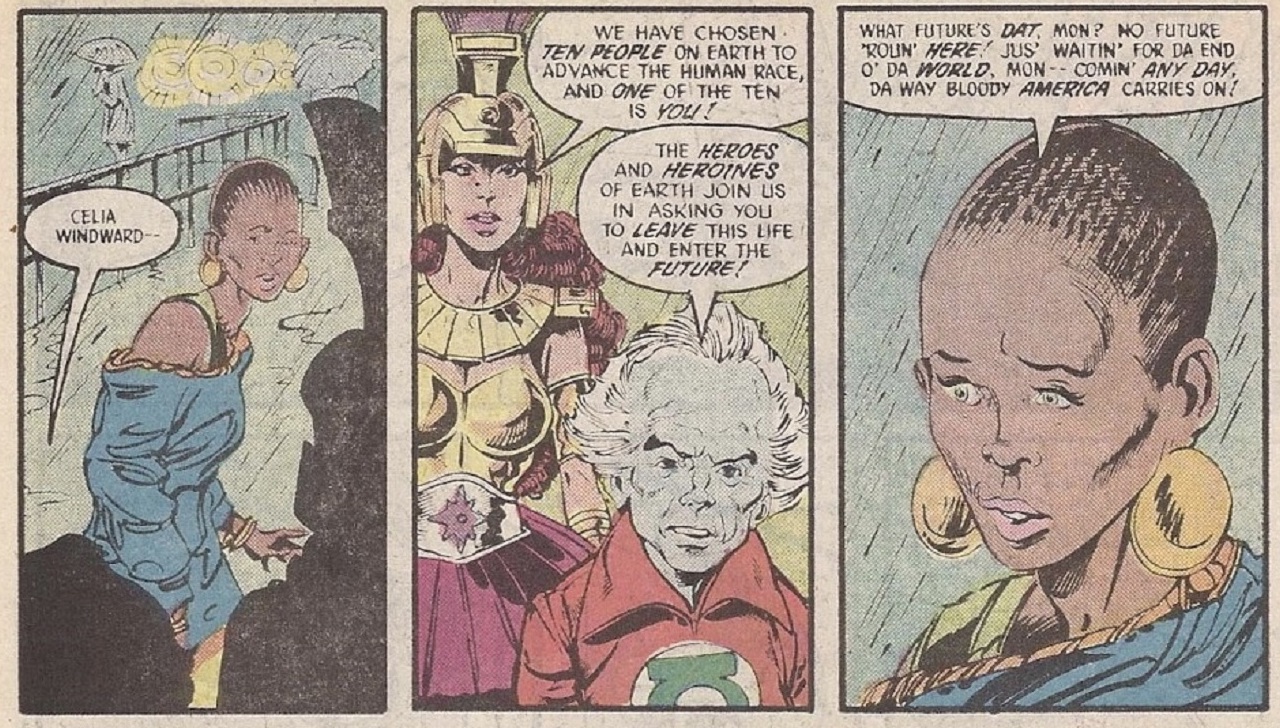 During the episode “Illusion of Control,” poor Virgil is left out in the cold as everyone around him seems to be pairing up, including the villains. Virgil was briefly given some hope when a young woman with a Jamaican accent briefly interacted with him, but the encounter ended with the youngster remaining unlucky in love. Don’t give up yet Virgil, because there’s a chance you may see that woman again. Her name is Celia Windward, and she first appeared in ‘Millennium’ #2 (written by Steve Englehart and penciled by Joe Staton). Celia was a Jamaican woman who was recruited by the Guardians of the Universe to become one of their chosen champions. Celia was given electromagnetic powers and took on the superhero persona Jet. Celia was one of the first characters in comics to be depicted as HIV positive. Celia didn’t let the disease break her spirit, as she continued her superhero career while battling the sickness. Perhaps Jet will show up on ‘Young Justice’ again and Virgil may get a second chance at impressing her.

HONORABLE MENTION: Did anybody catch the reference to the planet Mogo during Guy Gardner’s song? It’s also worth noting that the Space Trek episode Gar filmed was directed by J. Anson Schwartz. Could this be a tribute to DC Comics' legendary creator Julius Schwartz?