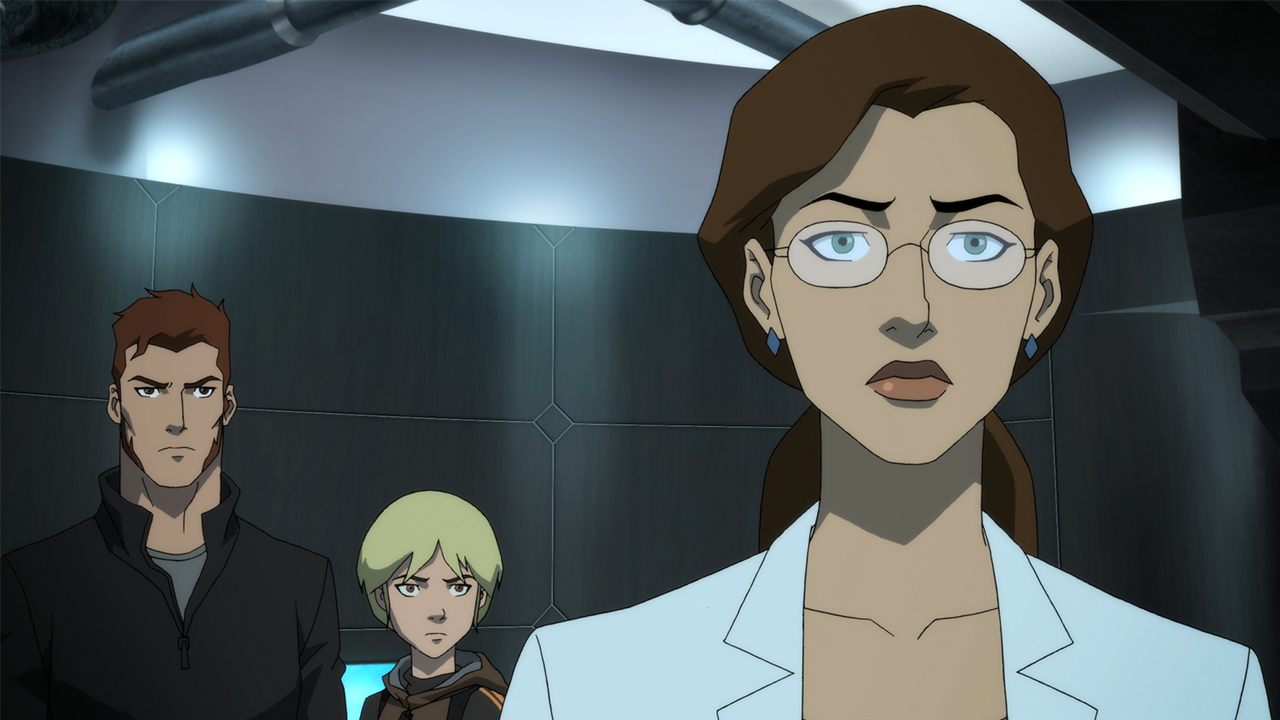 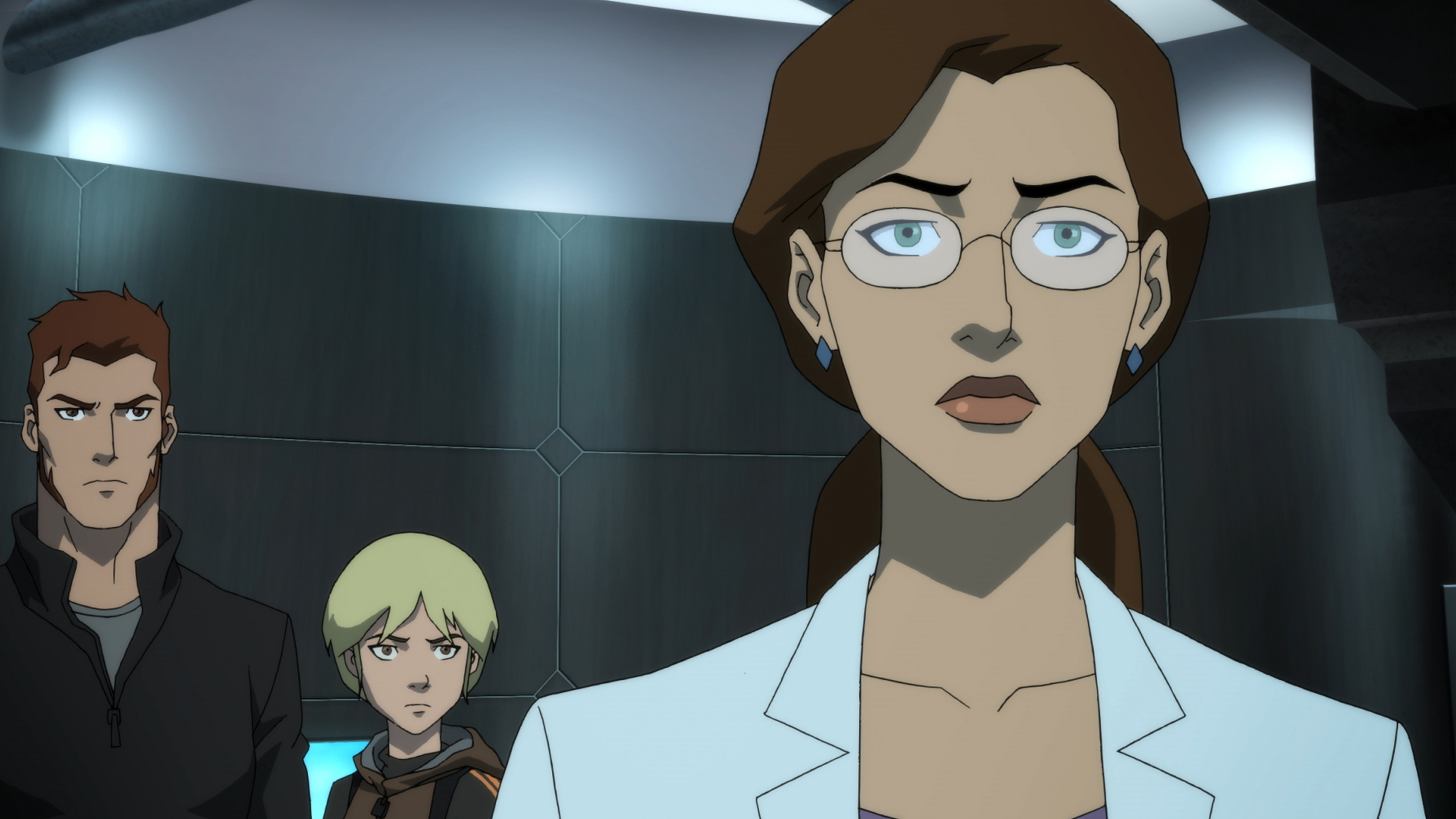 Wow! Things have really hit the fan in the latest episode of ‘Young Justice: Outsiders.’ Helga Jace has betrayed the Outsiders, Batman's backstage machinations have been revealed, Halo has been captured, and for some reason there are two Grannies. There was a lot to digest and unpack this week, including a few references to the comic book source material. Let’s take a look at the Easter eggs we found while watching “Antisocial Pathologies.” 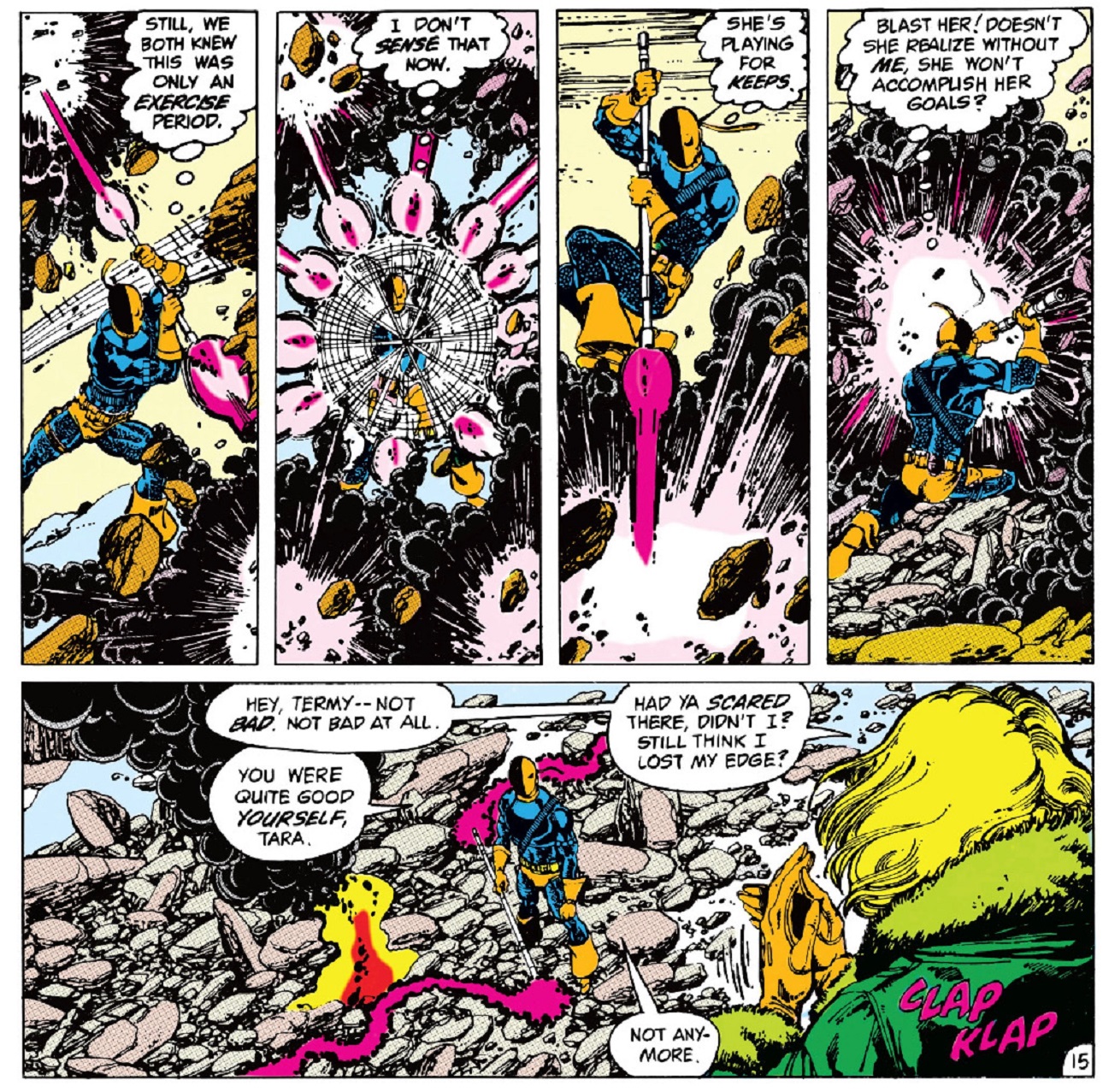 Betrayal was the theme of this week’s episode, so naturally there was a heavy focus on Terra. We learned more about her training from Deathstroke, as flashbacks revealed a sparring exercise in which Terra had lost control and lashed out. The scene plays out similarly to an iconic one from 1984’s ‘New Teen Titans’ #39 (written by Marv Wolfman and penciled by George Perez). Deathstroke was worried that the Teen Titans had softened Terra up, and wanted to test her skills with a training exercise, but like the scene from this week’s episode, the young girl quickly let her emotions get the best of her and she lost control. She lashed out at Slade with enough power to make the mercenary worry that he might be killed. Deathstroke survived the exercise, and all doubts about Terra going soft were quickly removed. 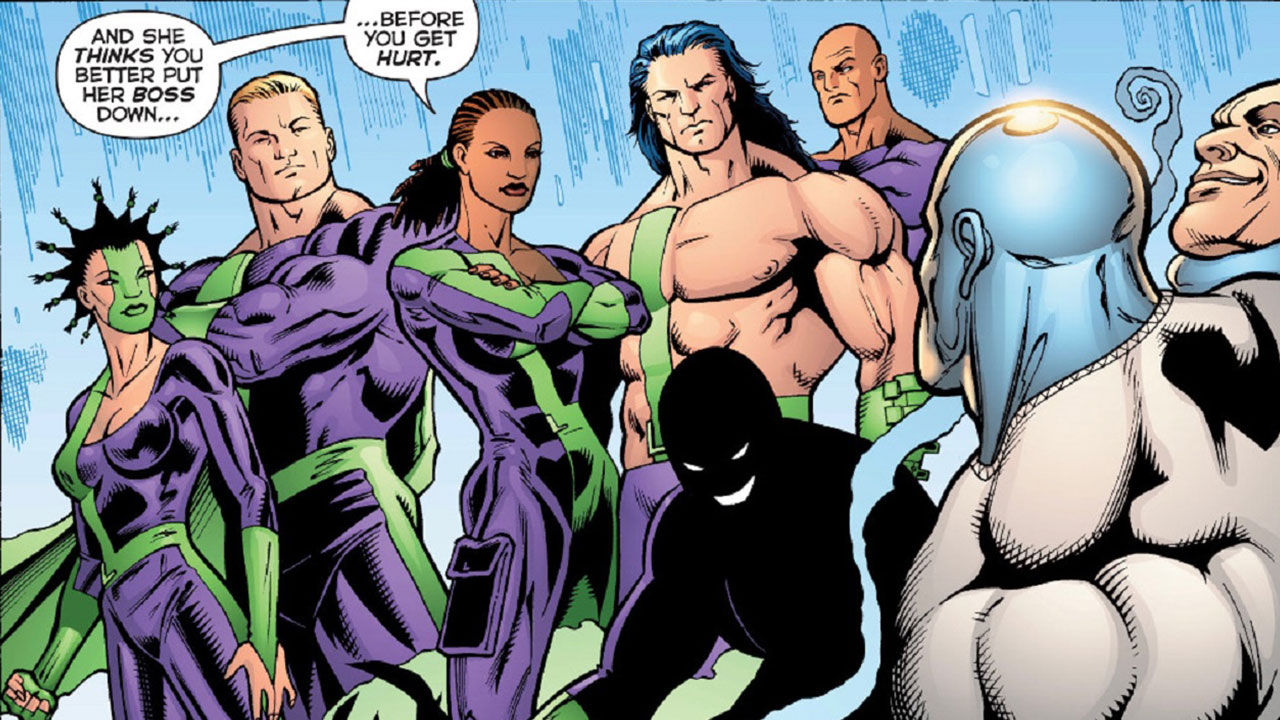 In this episode Infinity Inc, the Outsiders new rivals in superheroics, were featured as they gave a news interview. We spoke about the group in last week’s article, but now that we’ve seen the group, it appears that this is a different incarnation than the one fans are used to. The hero known as Trajectory did the talking during the interview, while her teammates Fury and Everyman stood by her side. All three heroes first appeared in  ‘52’ #9 as part of Lex Luthor’s Everyman Project. Lex’s program gave superpowers to non-metahumans, and the early participants in the project became part of the new Infinity Inc, Luthor’s media friendly superhero team. Trajectory was killed by Blockbuster during an early battle, and Luthor eventually lashed out and remotely deactivated everyone’s powers, causing many of the heroes to fall mid-flight to their deaths. Theory time: Was this new Infinity Inc started by Lex as an answer to Beast Boy’s Outsiders? Since Beast Boy has taken the fight to the media, it’s possible Lex is using his own Lexcorp controlled heroes to put some more chess pieces on the board. Remember, sometimes an Easter egg could be a clue. 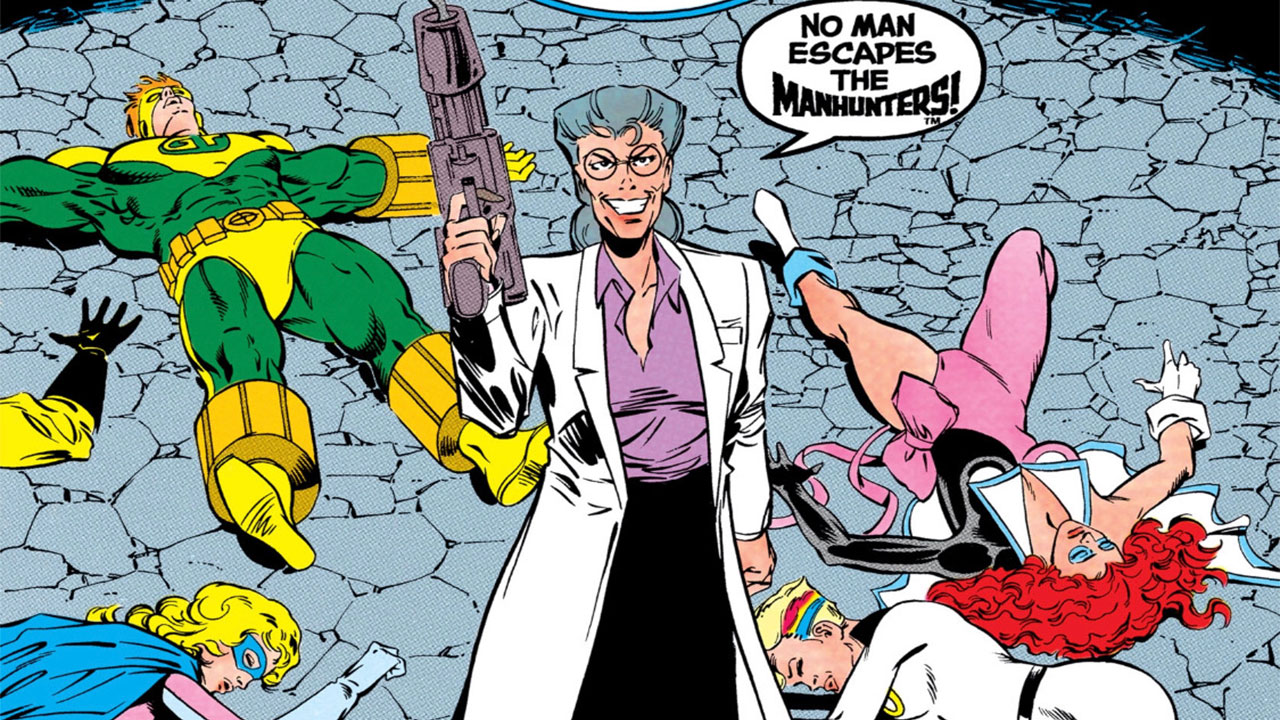 Say it ain’t so! Dr. Helga Jace has been working with the Light this entire time, and has been manipulating the Outsiders for her own twisted ends. Everything, including her romance with poor Jefferson Pierce, has all been a ploy to control the heroes. While her betrayal is shocking, it’s also in line with her actions in the original Outsiders comics. In 1987’s ‘The Outsiders’ #27 (written by Mike W. Barr and penciled by Erik Larsen), Helga Jace shocked the team by siding with the Manhunters during their alien invasion. Dr. Jace’s analytical nature made her feel a kinship with the Manhunters, causing her to choose them over her own planet. In fact, she even used her scientific skills to take over Metamorpho’s body, much like she did with Tara and Brion in this week's episode. During a subsequent battle, Helga accidentally disintegrated herself while battling the Outsiders with a high-powered blaster. The lesson is clear – don’t betray the Outsiders, or your life will fall to pieces. 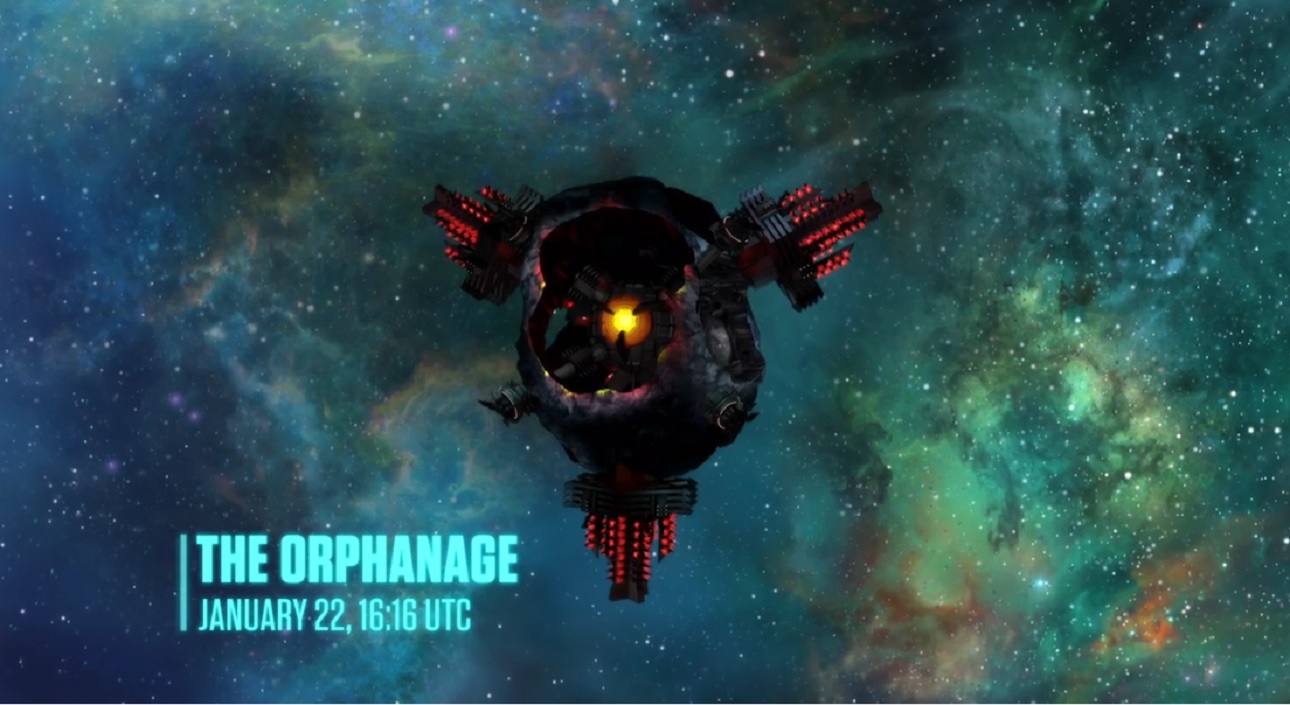 Don’t forget, every episode of ‘Young Justice’ contains a reference to the number 16 – sometimes more than once. This week it was featured in the timestamp during the episode’s conclusion, when Granny turned Halo over to – the other Granny?! If you’ve been playing '16 Watch’ along with us, don’t forget to report your findings to our Community. You might find a few that we missed!