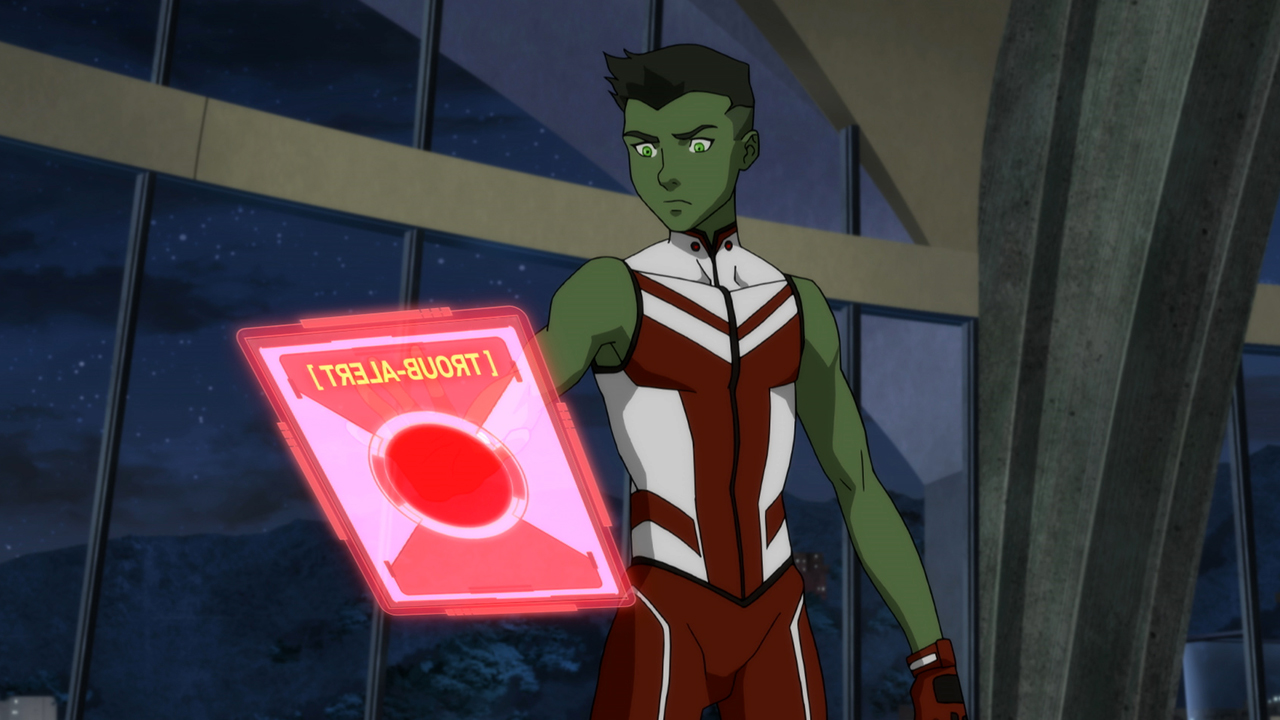 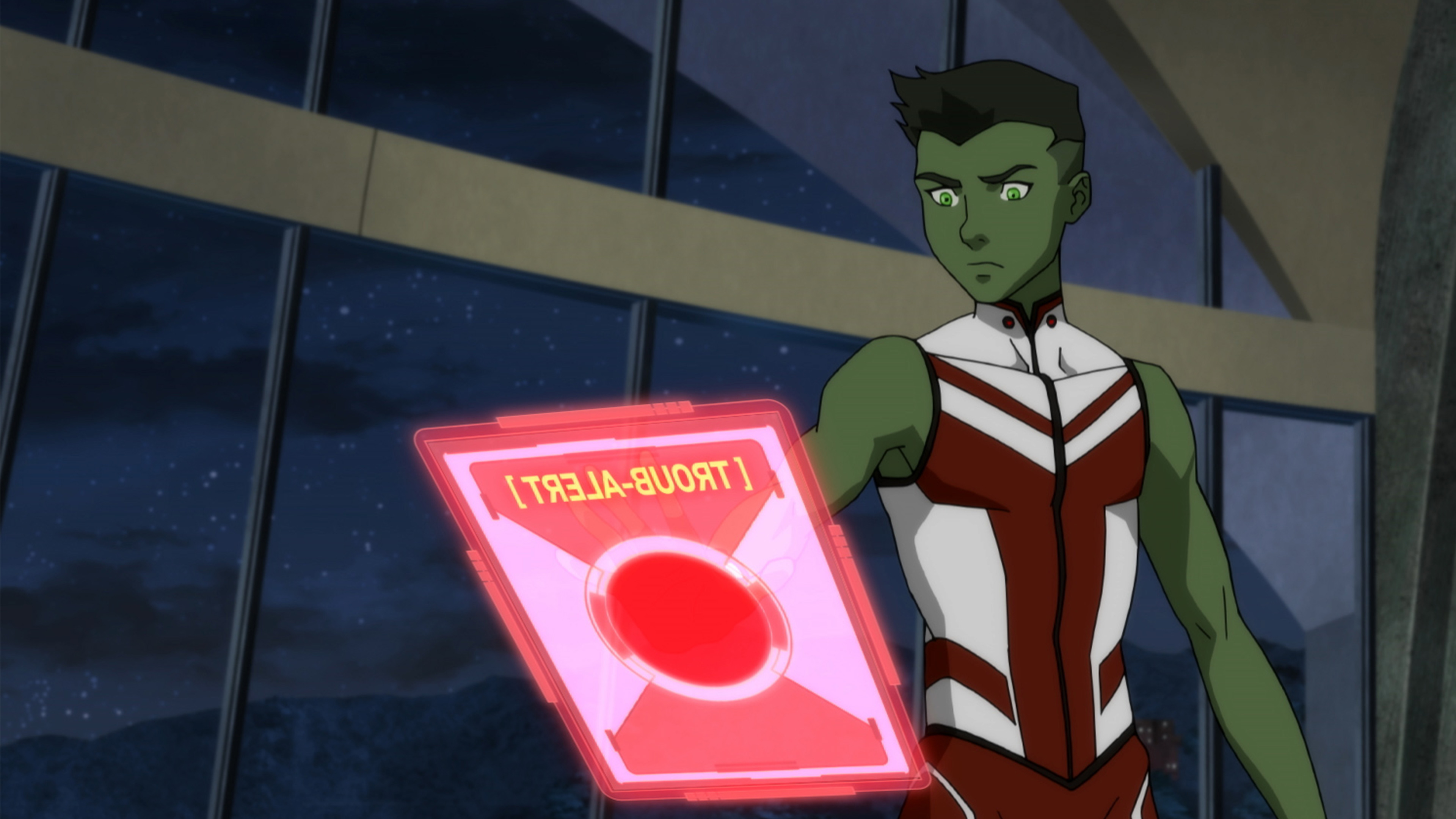 We are all Outsiders! This week on ‘Young Justice: Outsiders,’ Beast Boy took command and formed his own team of heroes. Their first mission took them to Brooklyn, Maine where they fought the alien Reach – or so it seemed. It’s always a good idea to keep your eyes pealed with this series, because things are never quite what they seem to be. Each episode has brought some deep cut comic book references and this week was no exception. Let’s take a look at all the Easter eggs for the episode “First Impression.” 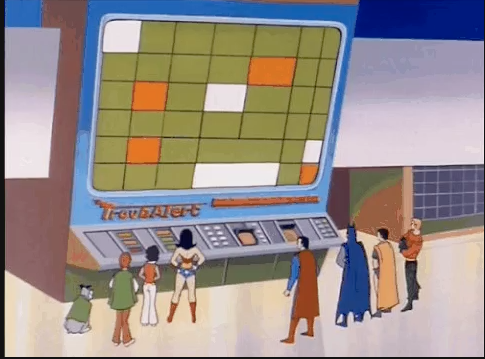 Beast Boy might be young, but he still has respect for the classics. When Gar learned the Reach were attacking Brooklyn, he called his team into action with an alarm system he dubbed the Troub-Alert. This reference probably made longtime DC fans grin from ear to ear. Decades before ‘Young Justice’ ever hit the airwaves, fans got their superhero fix by watching the ‘Super Friends.’ The animated series ran for 9 seasons between 1973 and 1985, and you can binge all of them right here on DC Universe. The Troub-Alert was the name of the computerized alarm system found in the Justice League’s headquarters, and it was first seen in the Super Friends premiere episode “The Power Pirate.” Keep your eye on that Troub-Alert, Gar, because now that Granny Goodness is consolidating her power, you’re going to need it! 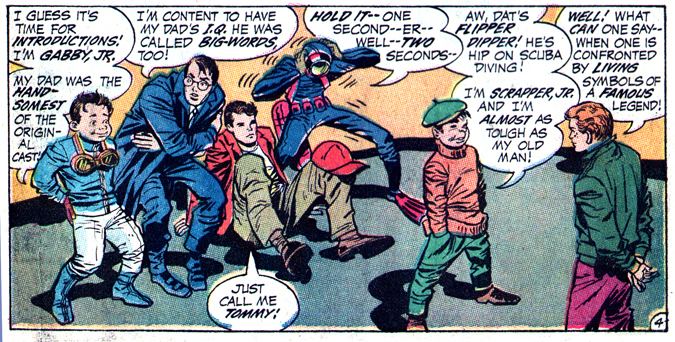 The Outsiders mission to Brooklyn put them in the path of a group of characters who paid tribute to one of DC’s oldest concepts – the Newsboy Legion! First appearing in 1942's ‘Star-Spangled Comics’ #7 (written by Joe Simon and penciled by Jack Kirby), the Newsboy Legion were a group of orphans residing in the Suicide Slum neighborhood. They made their living by selling newspapers, and were adopted by a cop named Jim Harper, who was secretly the shield-wielding hero known as the Guardian. Simon and Kirby had a habit of creating marvelous shield-wielding heroes back in the 1940s. The Newsboy Legion members were Tommy Tompkins, Big Words, Gabby, and Scrapper. Jack Kirby revived the Newsboy Legion concept decades later in ‘Superman’s Pal, Jimmy Olsen’ #133 (story and art by Jack Kirby) when Jimmy met the sons of the original members, who were now working for a secret organization called Project DNA. 1988's ‘Superman Annual’ #2 (written by John Byrne and Roger Stern, penciled by John Byrne and Ron Frenz) introduced another layer to their mythology – the modern Newsboys weren’t the offspring of the originals, they were clones! The organization was renamed Project Cadmus, which has since played a major role in DC history. This episode introduced gender-swapped versions of Big Words, Tommy Tompkins (now called Tommi), and Gabby (now called Gabi), while Scrapper remained a male. The Newsboy Legion wasn’t the only group that these characters homaged, but we’ll get into that later. 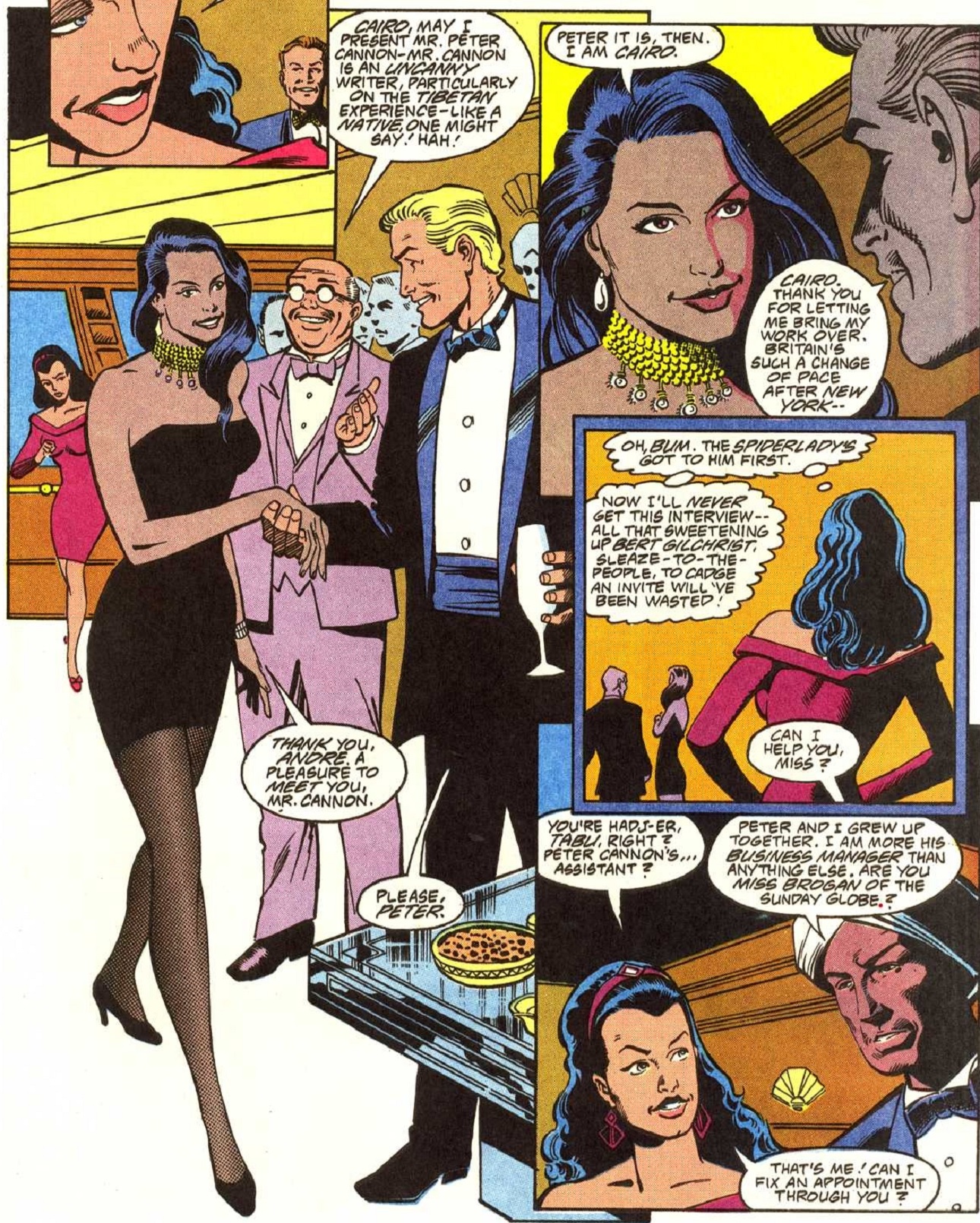 Looks can be deceiving, as the Outsiders learned when they unmasked the alien Reach members. It turned out they weren’t extraterrestrial, but were human members of the criminal group Intergang. Whisper A’Daire, Scorpia A’Daire, and Cairo Defrey had stolen Reach tech, hoping to use it for their criminal enterprise. Longtime ‘Young Justice’ viewers may remember Whisper A’Daire from her appearances in seasons 1 and 2, but this is the first time her associates Scorpia and Cairo have appeared on the show. Although this episode made Scorpia and Whisper sisters, the two are unrelated in the comics. Scorpia, who was never given a last name, first appeared in ‘Power Company: Skyrocket’ #1 (written by Kurt Busiek and penciled by Joe Staton), where she served as leader to a terrorist group known as Scorpio. Cairo Defrey is another member of Scorpio, and she’s been causing mayhem ever since her debut in ‘Peter Cannon: Thunderbolt’ #1 (story and art by Mike Collins). The group Scorpio has a lot of dangerous members, so it should come as no surprise that the animated version of Intergang is poaching their ranks.

We Are All Outsiders 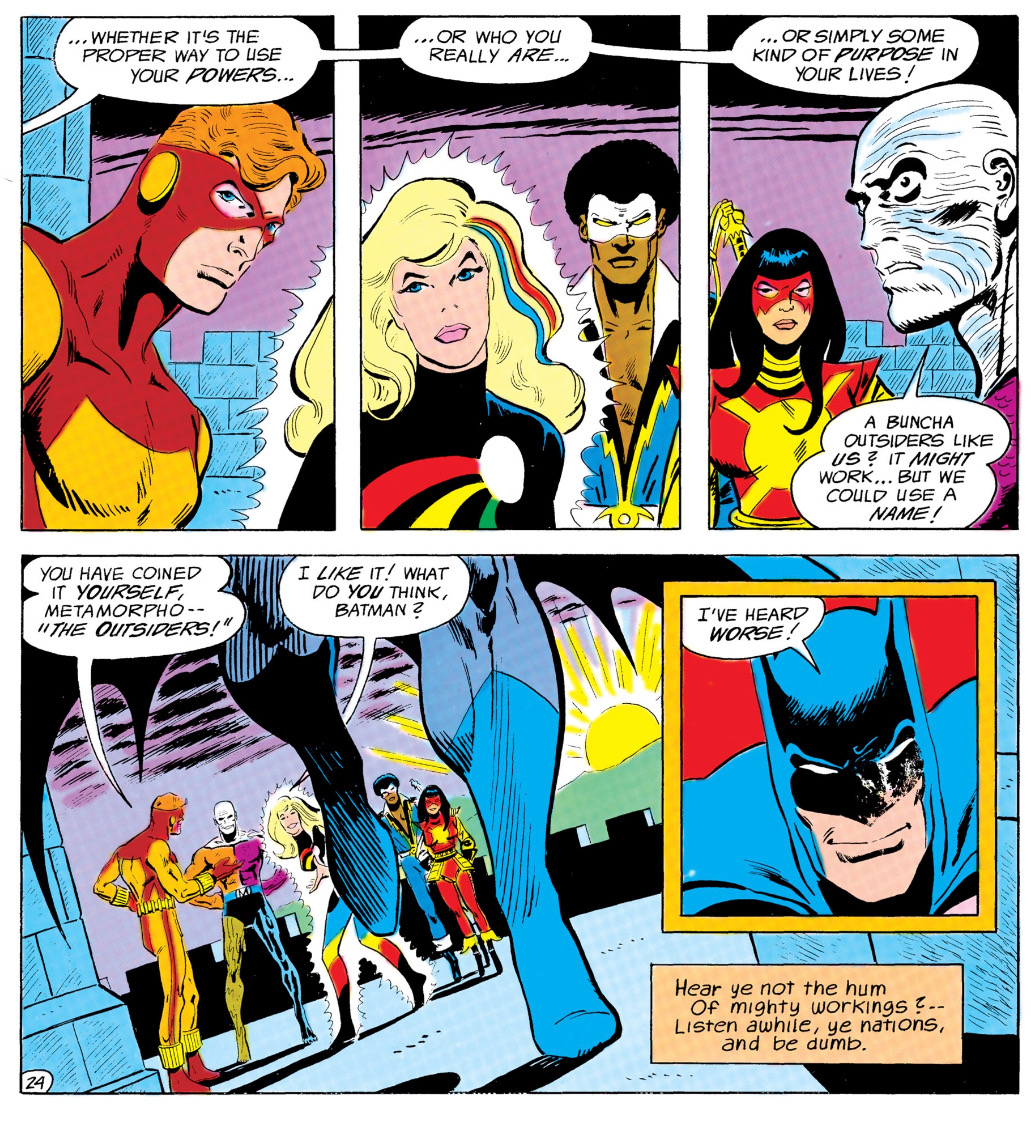 After an inspiring speech by Beast Boy, the new group took social media by storm. Gar’s message of everyone being an “outsider” resonated with youth culture, causing his team to become known as the Outsiders. This is one of the many ways this season has paid homage to writer Mike W. Barr and artist Jim Aparo’s classic ‘Batman and the Outsiders’ comic series. Teenagers aren’t the only ones who feel like outsiders, as Metamorpho demonstrated at the end of ‘Batman and the Outsiders’ #2 (written by Mike W. Barr and penciled by Jim Aparo). Metamorpho’s comment inspired Geo-Force to nominate "Outsiders" for their official team name. The suggestion caused the Dark Knight to do something he seldomly does—smile! Currently Brion is the only member of Gar’s group from the original comics team, although Halo, Black Lightning, Metamorpho, and Katana have all played big roles this season. 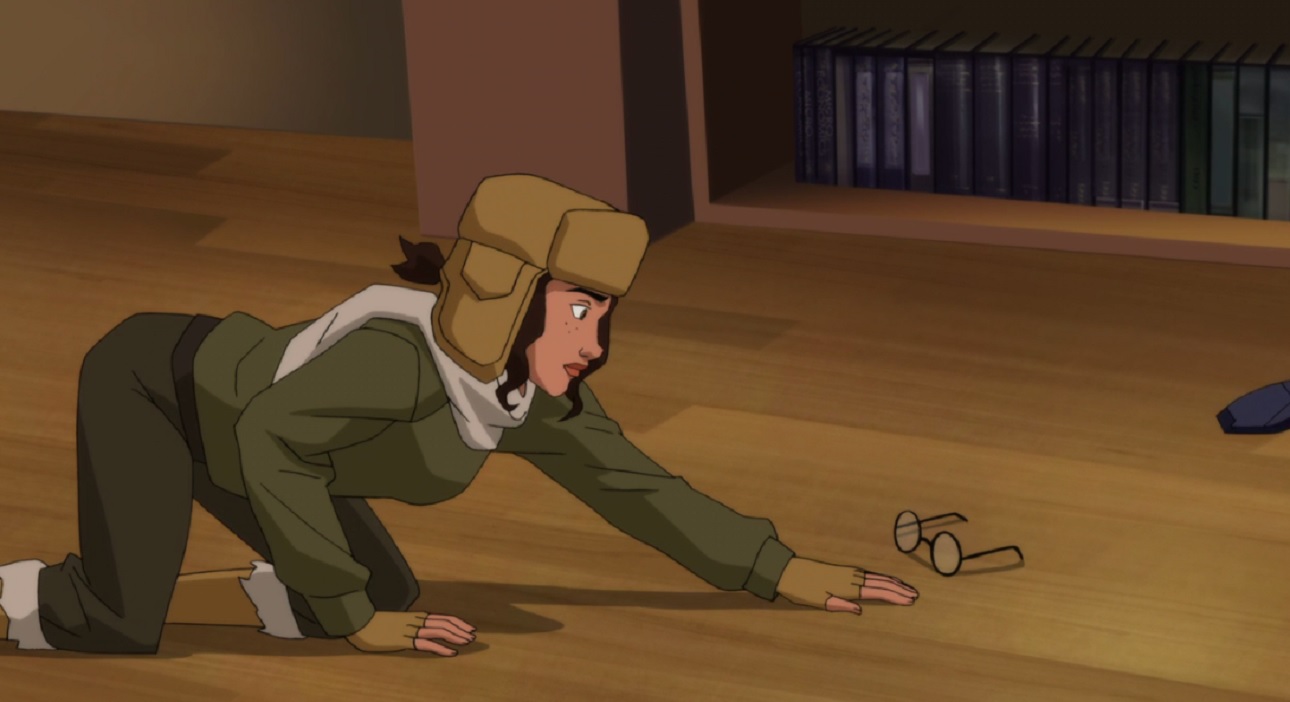 Jinkies! The citizens of Brooklyn, Maine might have given us modern versions of the Newsboy Legion, but they also paid homage to the Scooby-Doo franchise. Antonia “Big Words” Rodriguez is designed to look like Velma Dinkley and is even given some of her vocal inflections. As if that wasn’t enough, Antonia also crawls around on the ground searching for her glasses, which is one of Velma’s classic character bits. Gaby Gabrielli is designed to look like Daphne Blake, and is even voiced by Grey Griffin, a frequent voice actress for the character. Mayor Tompkins is a tribute to Mayor Jones from ‘Scooby Doo! Mystery Incorporated,’ while Sheriff Maguire pays homage to Sheriff Stone from the same show. In fact, if you listen to Troy Baker’s performance as Maguire, you may notice he’s doing a brilliant impression of Patrick Warburton’s Sheriff Stone. Intergang’s villainous plot is also reminiscent of classic 'Scooby-Doo' episodes, since the human villains were disguised as alien monsters. Whisper even states that she would’ve gotten away with it if it wasn’t for the meddling kids. Hmmm, would Meddling Kids be a better team name than Outsiders? 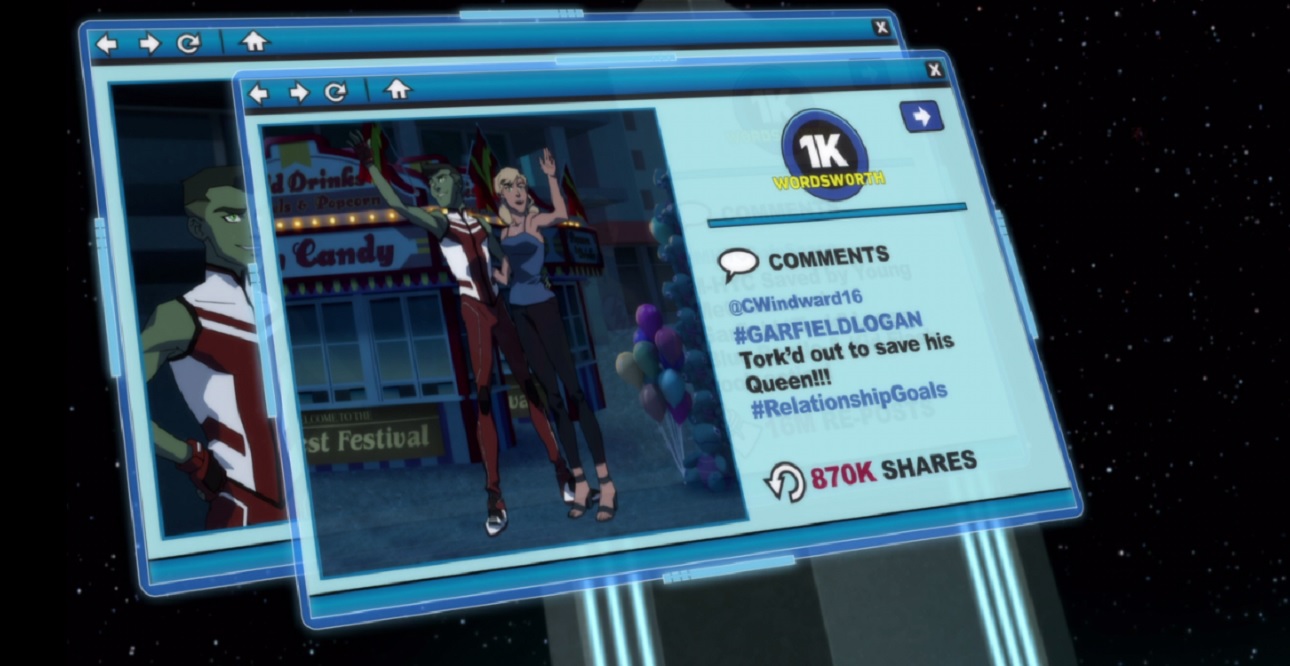 Did you know that the number 16 is hidden throughout every ‘Young Justice’ episode? If you keep your eyes pealed for it each week, you might find the number in some unexpected places. For example, Celia Windward’s social media handle is @CWindward16. Angel O’Day’s picture with Beast Boy has 160 million likes, and the Meta-Human Youth Center’s post has 16 million retweets. So if you enjoyed this week’s episode, consider tweeting #wearealloutsiders. Who knows -- it may get 16 thousand likes!