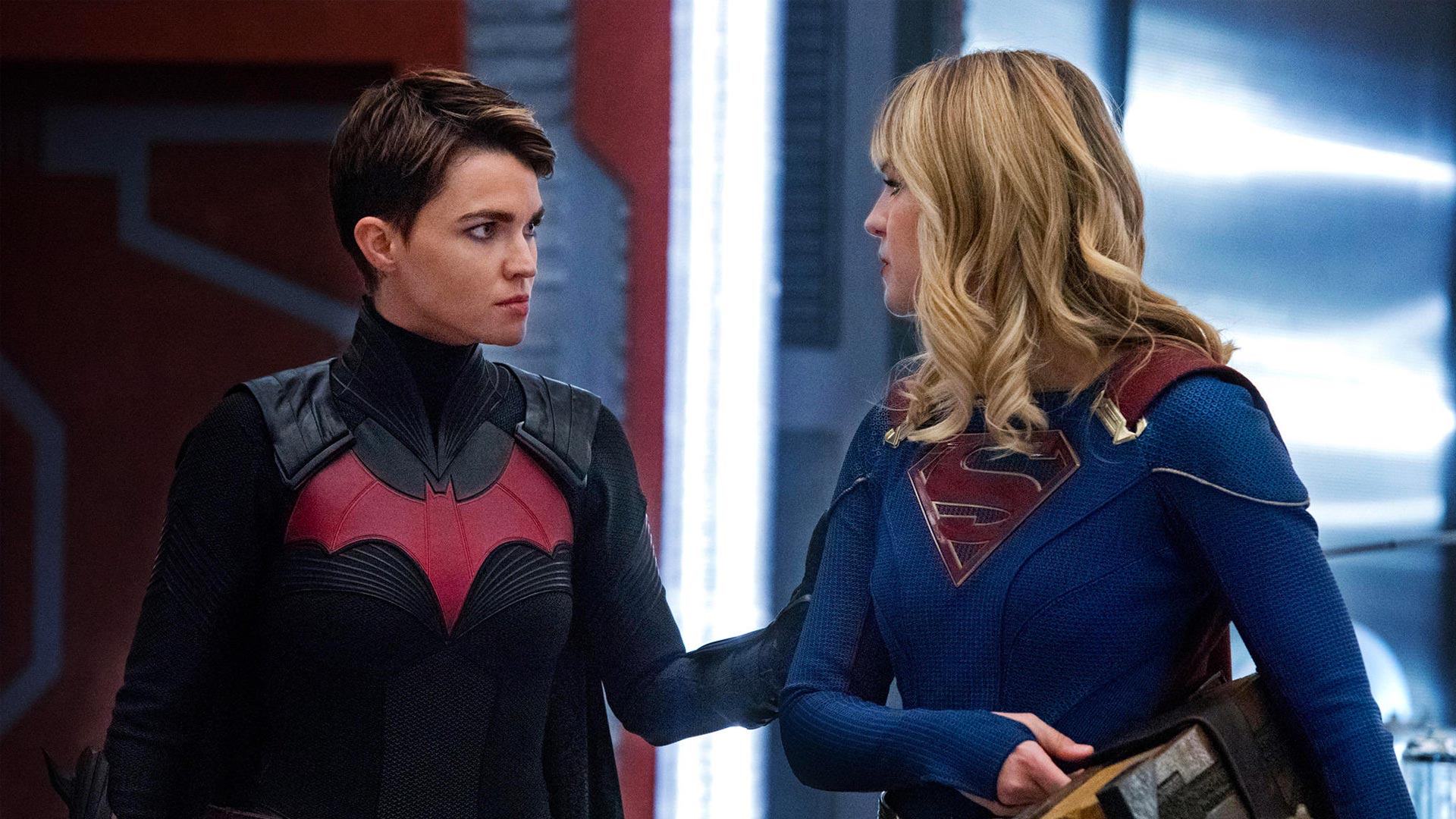 We’re still reeling from last week’s epic Crisis on Infinite Earths television event, and unpacking all the awesome things we saw. In addition to adapting one of DC’s most memorable storylines, the crossover has acted as a love letter to DC history, with lots of deep cuts and Easter eggs. We recently took a look at the comic book and media references from part 1, and now we’re going to dive into part 2. On December 9th, Crisis on Infinite Earths continued with part 2 airing on Batwoman, and here’s our lightning round look at their Easter eggs…

We’re taken to the Earth-74 version of the Waverider, and their version of Gideon is called Leonard. The A.I. is voiced by Wentworth Miller, who previously played Leonard Snart aka Captain Cold on The Flash and Legends of Tomorrow.

The Monitor tells the heroes that he’s recruited Felicity Smoak (Oliver Queen’s tech-savvy wife) for a mission off-screen. Felicity’s mission for the Monitor can be found in the Crisis on Infinite Earths Giant #1 tie-in comic. This Walmart exclusive comic features an original story by Marc Guggenheim and Marv Wolfman and expands upon the events of the television crossover.

The Monitor also references “the Tome of the Guardians” which some viewers are speculating is a reference to the Guardians of the Universe. The Guardians are cosmic beings from the planet Oa who were first seen in 1960’s Green Lantern #1.

During a heated conversation, Supergirl calls Lex Luthor a “poisonous snake,” which is an insult that was directed at the villain in Superman II.

Supergirl and Batwoman’s visit to Earth-99 results in an avalanche of Easter eggs. Earth-99 is seemingly named for the year 1999, which is when Batman Beyond first aired, the first television series to feature a retired Bruce Wayne. As the World’s Finest duo arrive at Wayne Manor, musical cues from Batman: The Animated Series can be heard. 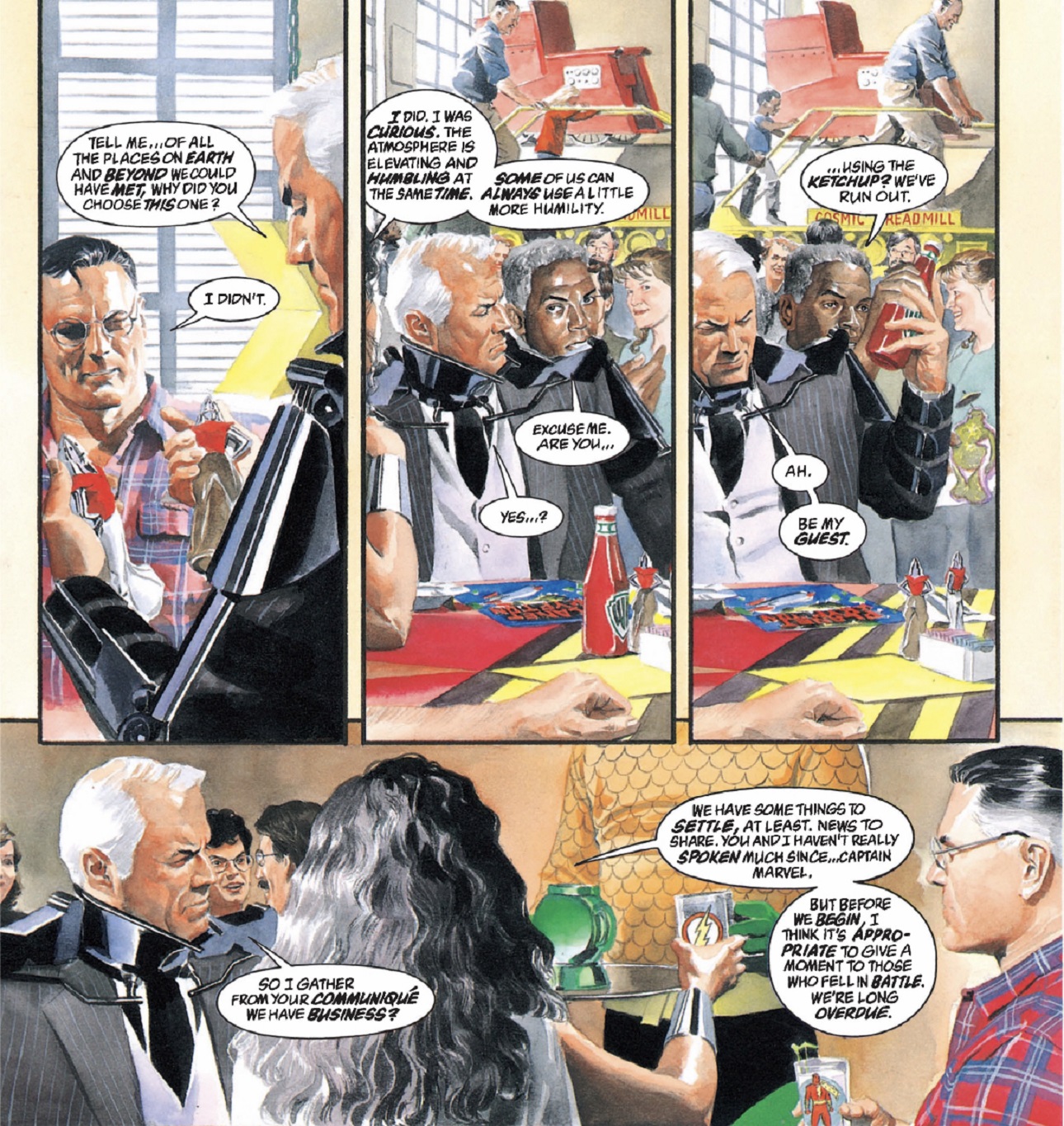 Speaking of Batman: The Animated Series, the Bruce Wayne that Kate and Kara meet is played by Kevin Conroy, who voiced the Dark Knight in the iconic cartoon. Conroy has also portrayed Batman in various other projects, such as Justice League, Superman/Batman: Public Enemies, Justice League: The Flashpoint Paradox, and more. This is his first time playing Bruce Wayne in live-action and he totally owned the role. The outfit Conroy wore is similar to the armor/business suit combo that Bruce wore in the Kingdom Come limited series. 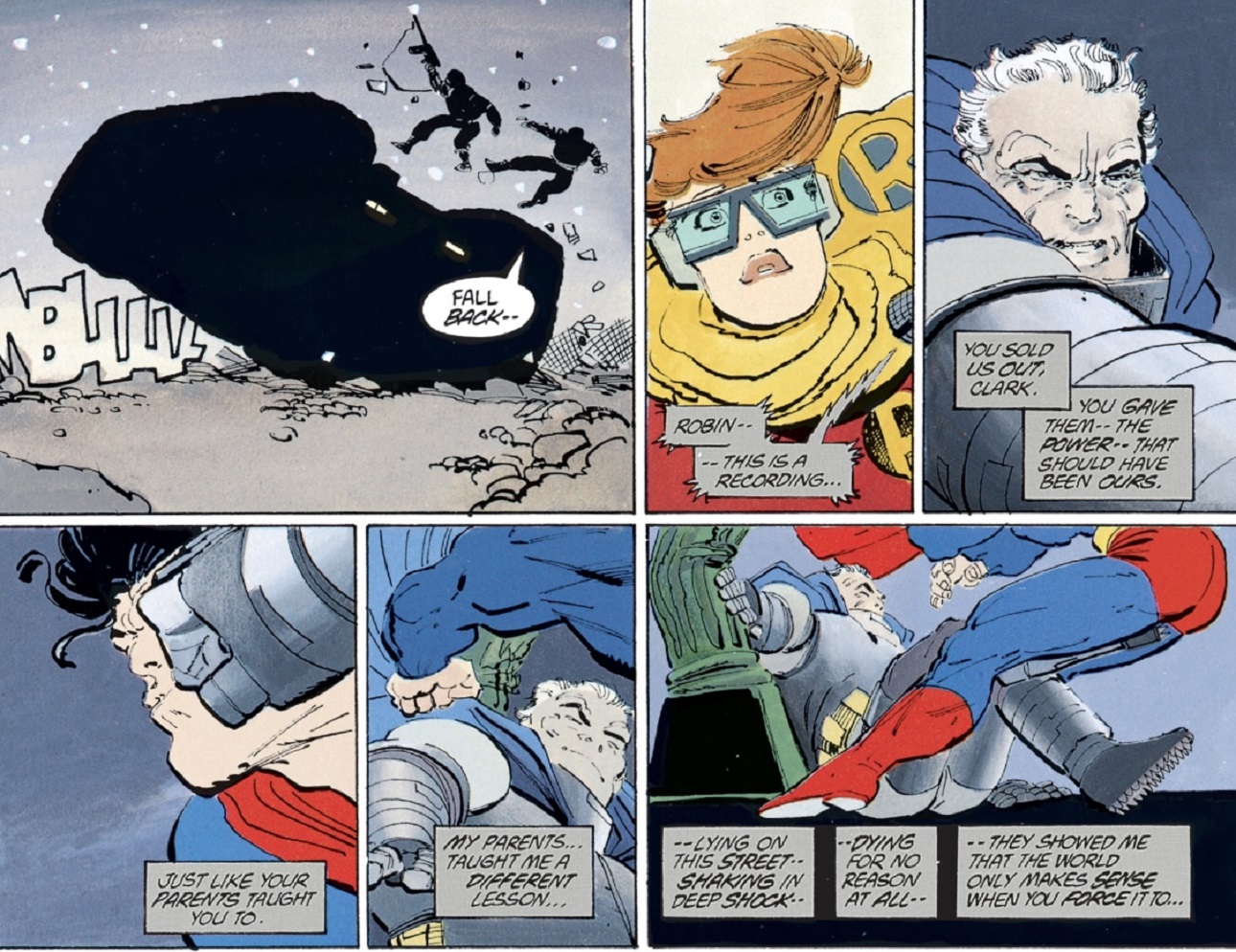 Before Kara spots Clark Kent’s cracked glasses, souvenirs from villains like the Riddler and Joker can be seen in the trophy case. While Bruce and Kate are talking in the Batcave, the Batmobile from Tim Burton’s Batman films can be seen under a tarp.

When Bruce is justifying his demented worldview to Kate, he quotes specific passages from Frank Miller’s The Dark Knight Returns limited series, including “My parents taught me a different lesson.” 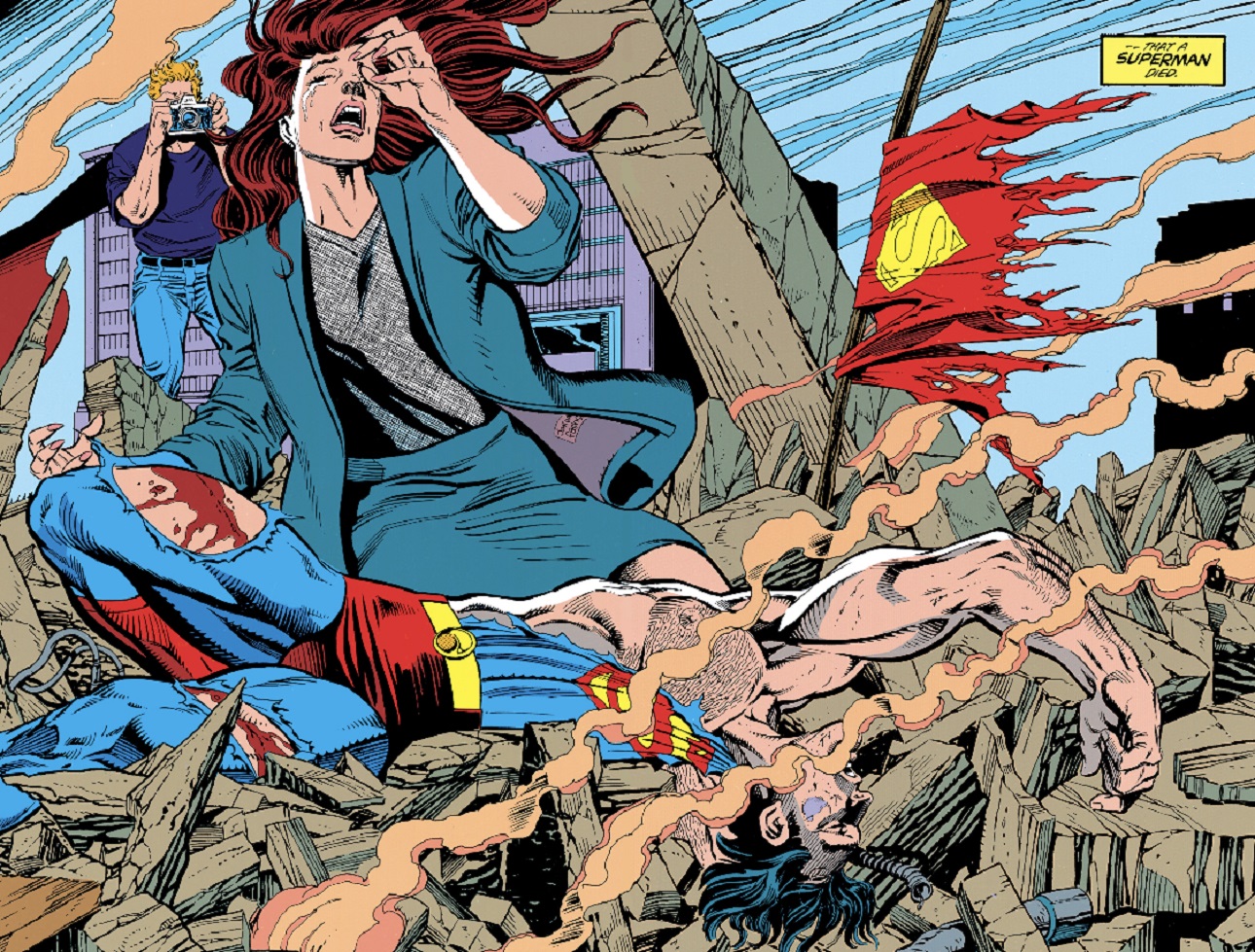 While hunting for Lex Luthor, Lois and Clark visit Earth-75, which is named after 1992’s Superman #75,  The Death of Superman. Dan Jurgens final splash page is recreated when a news report shows Earth-75’s Lois Lane cradling the dead body of her world’s Superman.

Clark, Lois and Iris then visit Earth-167, which is the world from the Smallville television series. Earth-167 is named in honor of Smallville showrunners Al Gough and Miles Millar, who were both born in 1967. The scene was shot on the original Smallville farm set with Tom Welling reprising his role as Clark Kent, and Erica Durance returning as Lois Lane. A few Daily Planet newspapers are hung on the wall, with headlines identical to the ones seen in the 1978 Superman movie. One of the newspapers features an image of Tom Welling’s shirt rip from the final episode of Smallville.

Lois compares Earth-167 Clark to “the buff guy from the paper towel rolls,” echoing a similar comment Erica Durance’s Lois made in Smallville season 8. Earth-167 Clark mentions Lex Luthor being President of the United States, a reference to the President Lex storyline from the comics, and a news report from the final episode of Smallville. When Lex Luthor shows up to confront Clark, he name checks the Super Friends, a popular DC comics cartoon series.

By the way, if this sequence gave you heavy Smallville nostalgia, consider reading the Smallville Season 11 comic series. Crisis producer Marc Guggenheim has said that he considers the events of the digital comic canon, and they help fill the gap between the final episode of Smallville, and the current Crisis crossover. 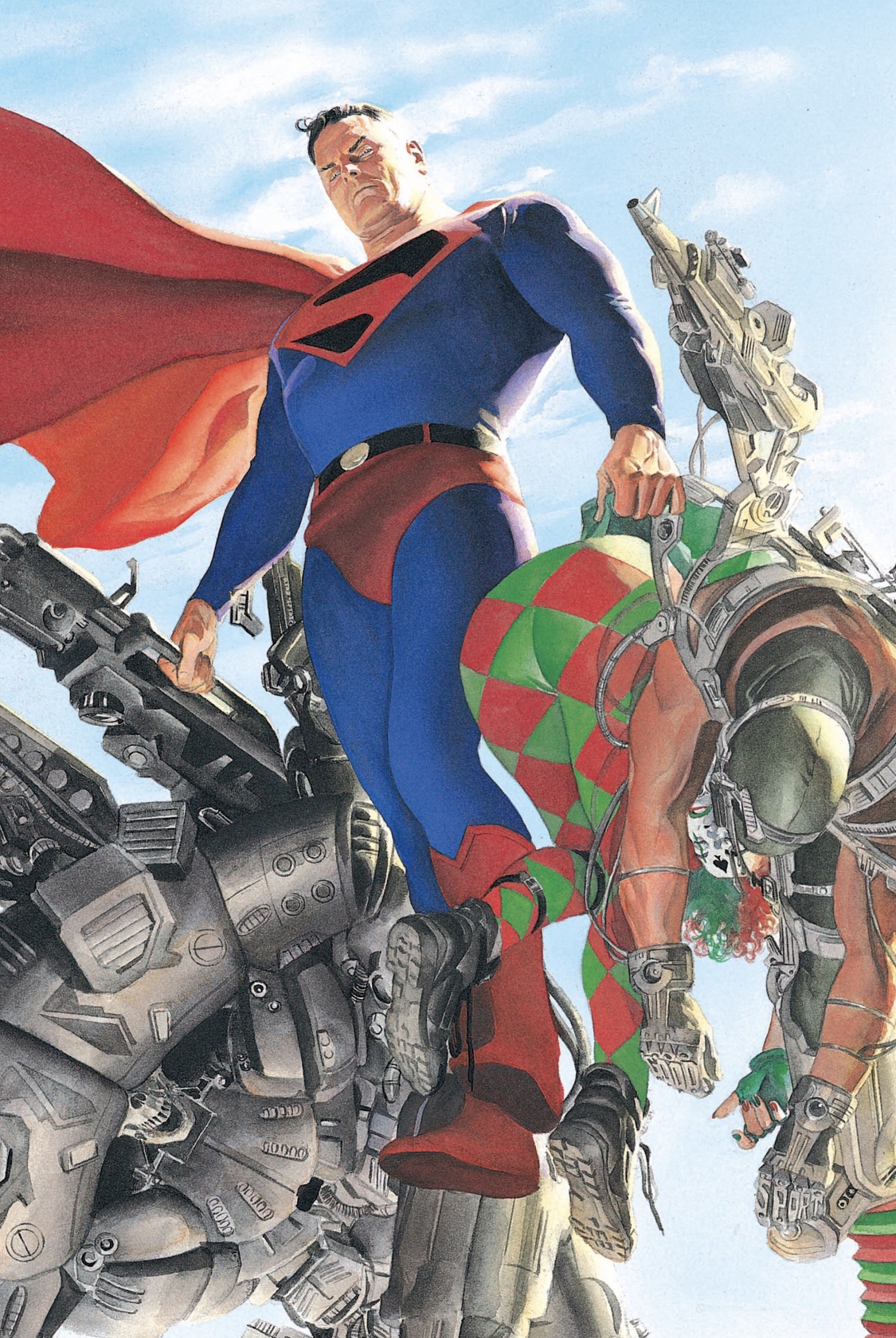 The hunt for the Paragon of Truth takes the heroes to Earth-96, which is named for the year Kingdom Come was published. Brandon Routh reprises his role as Superman/Clark Kent for the first time since 2006’s Superman Returns, with a costume straight out of the Kingdom Come limited series. Earth-96’s Lois Lane was murdered by the Joker, the same fate she had in the Kingdom Come comics.

If you pause at just the right time, you might recognize some other names on the Daily Planet’s memorial wall. Some names from different pieces of Superman media are mentioned, like Angela Chen from Superman: The Animated Series, Lacy Warfield from Superman IV: The Quest for Peace, Brad Hunter from 1969’s Superman #220, and many more! 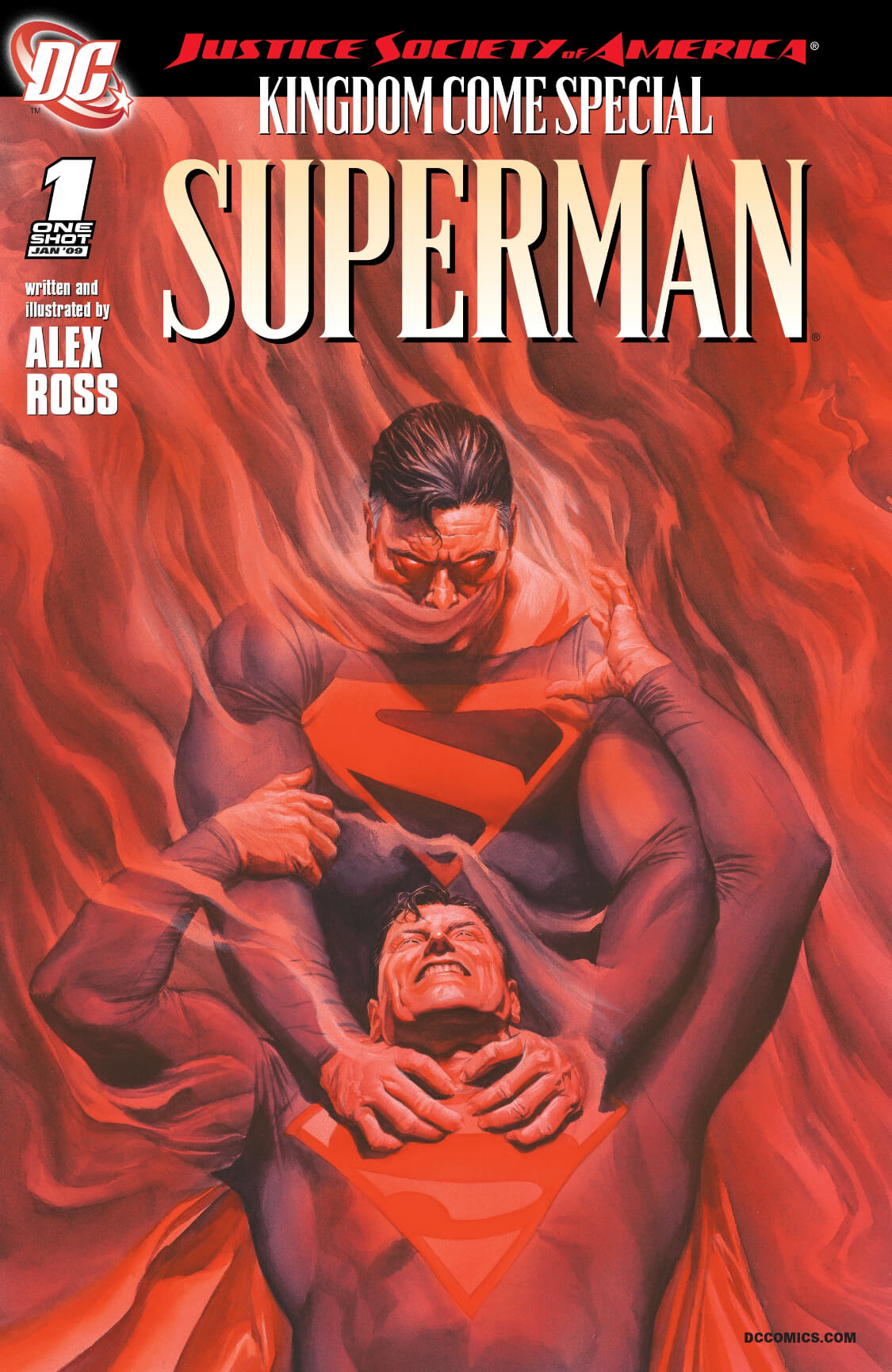 John Williams score from the Superman films can be heard during this sequence, and at one point Earth-96’s Clark talks about a time he went nuts and fought himself, a reference to Superman III. While they’re fighting, the two Supermen mimic a pose from the cover of JSA Kingdom Come Special: Superman #1.

Routh’s original stint as the Man of Steel is referenced a few ways in this episode. When he’s using his heat vision, the special effects team went to great lengths to make sure it looked just as it did in the 2006 movie. When he’s holding baby Jon on the Waverider, Clark references Jason White, his son from Superman Returns.

During their visit to Earth-18, the heroes run into Jonah Hex, who doesn’t have his iconic scars. Johnathan Schaech reprises his role as the frontier gunman, having previously played him in Legends of Tomorrow. Sara Lance has a confrontation with Hex during this scene which results in him getting his signature scars.

The episode concludes on the mother of all cliffhangers – the Anti-Monitor revealing himself! The Anti-Monitor was the evil force behind the original Crisis on Infinite Earths comics event, and he was responsible for the destruction of many worlds. His body count was bigger than the Joker and Darkseid combined, and it looks like his live-action counterpart is a force to be reckoned with.

That’s it for part 2! Check back here later in the week as we examine all the cool references from Crisis on Infinite Earths part 3.

Did you spot any Easter eggs that we missed? Let us know in our Community!