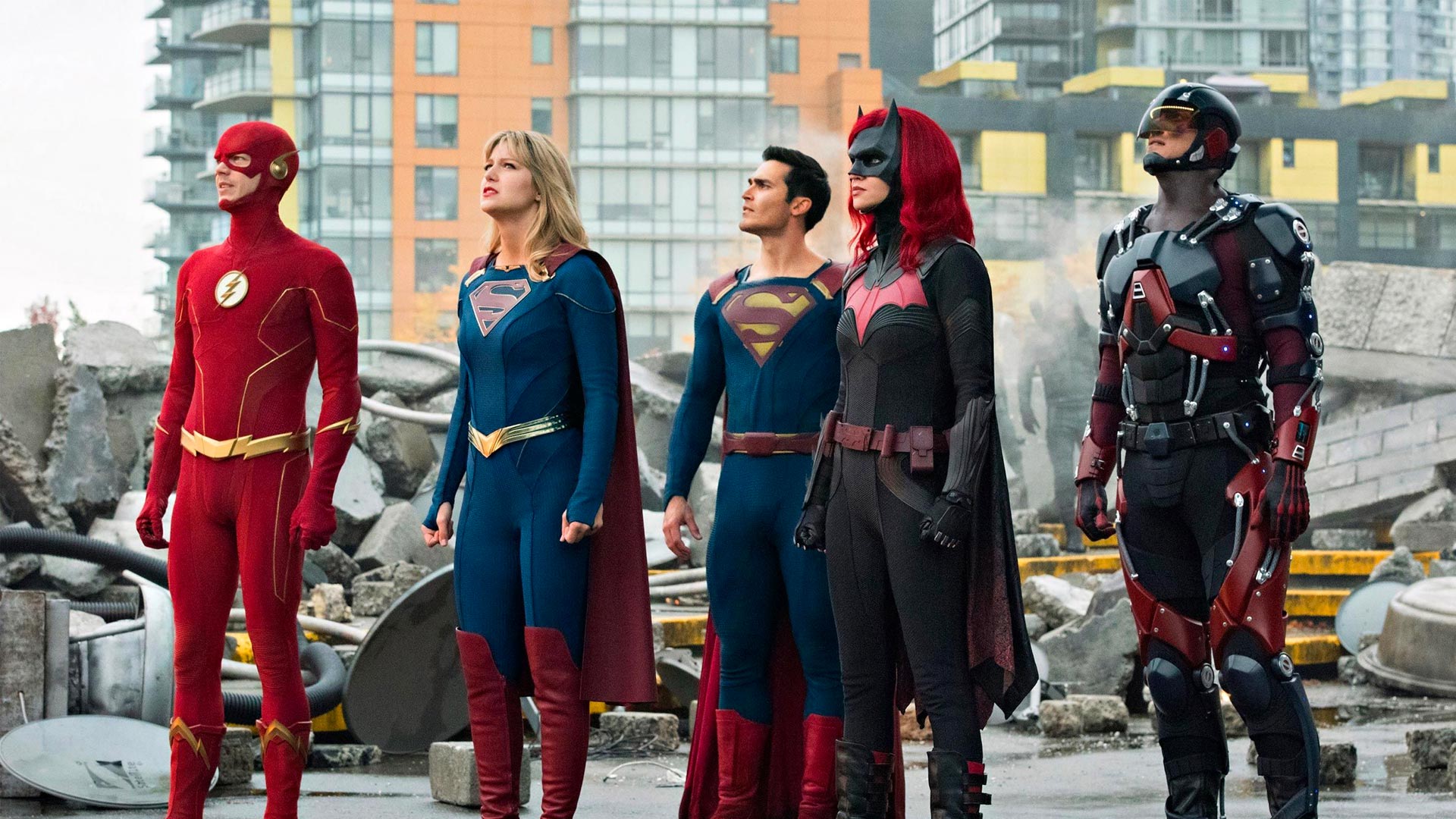 The Crisis has arrived, and no world in the Multiverse is safe! On December 8th, the first part of the Crisis on Infinite Earths television event aired on Supergirl, and, in addition to adapting one of the most beloved storylines in DC history, it contained many great Easter eggs and homages to the DC Universe. Some of our all-time favorite shows and movies were revisited, and some of our favorite characters were killed off. Because there are so many great references to go over, we’re going to do a lightning round version of our usual Easter egg column. Let’s break down all the cool things we spotted in part 1 of Crisis on Infinite Earths…

The Monitor’s opening monologue is nearly identical to the opening narration in Crisis on Infinite Earths #1. 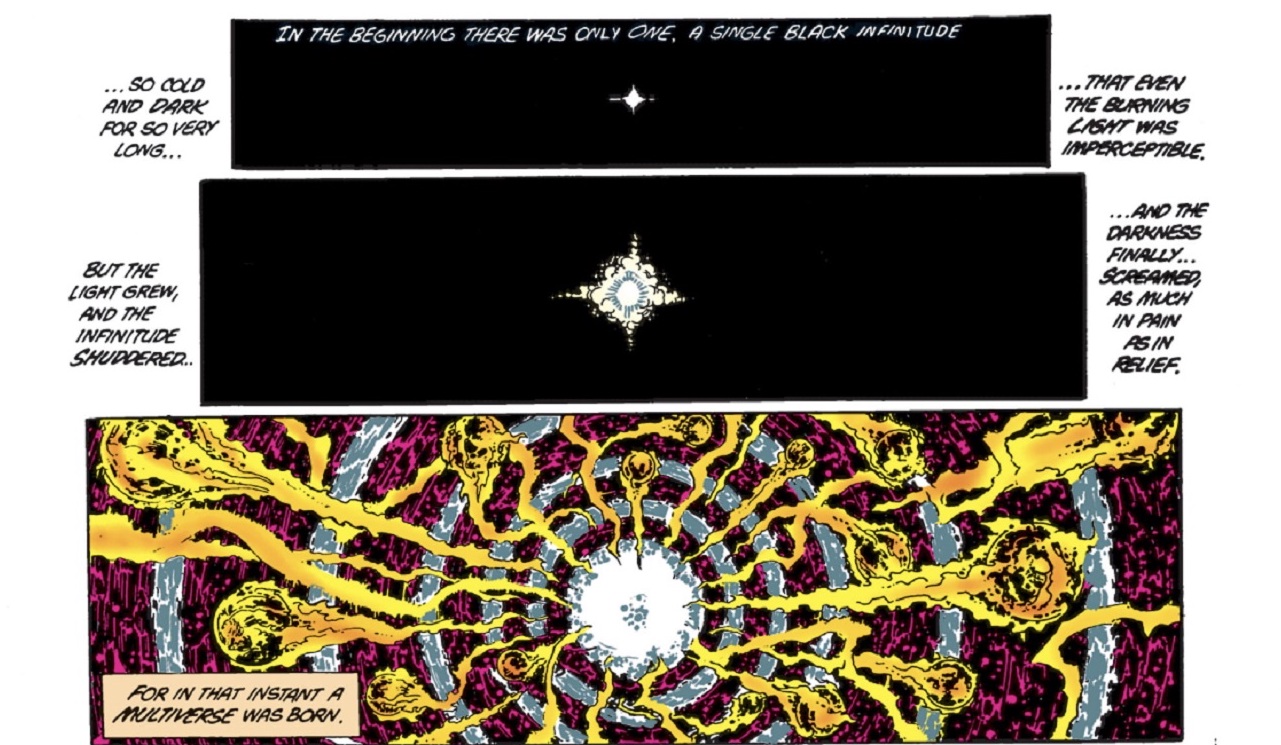 As the antimatter wave begins destroying the multiverse, the first stop it makes is Earth-89, home to the Tim Burton Batman movies. The establishing shot of Gotham City is a recolored version of the one seen at the beginning of the 1989 Batman film, and the musical cues are taken from Danny Elfman’s iconic score. Robert Wuhl reprises his role as Alexander Knox, and the newspaper he’s reading features Jerry Ordway artwork from the final page of the Batman movie comic adaptation. 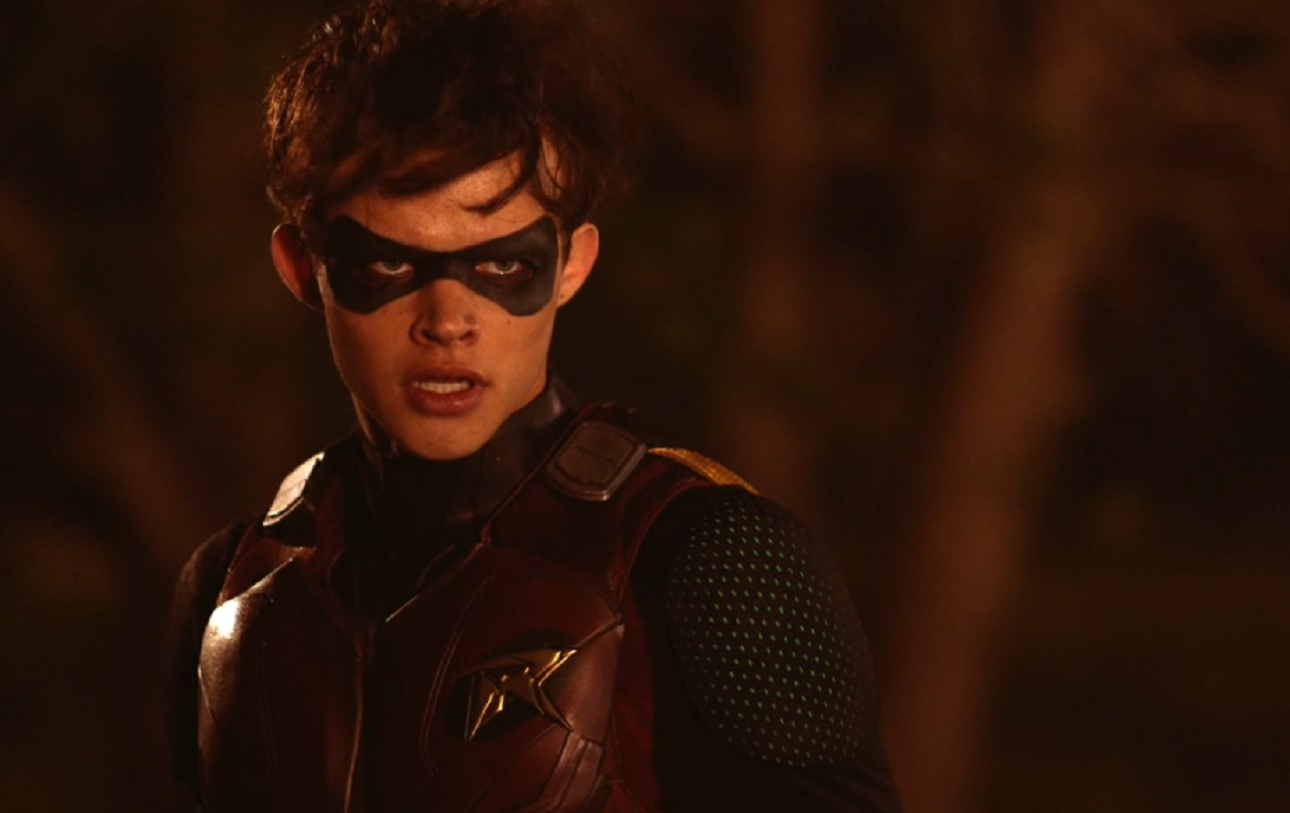 The destruction continues to Earth-9, home of DC Universe’s Titans. Jason Todd (Curran Walters) and Hank Hall (Alan Ritchson) are briefly seen before their universe is reduced to nothingness.

Earth-X was the next target, and the Ray was briefly seen making a last stand on his doomed world. Earth-X was the setting for the Arrowverse’s 2017 crossover event, and was first seen in Justice League of America #107. It’s a world where the Nazis won World War II, so while it isn’t a fun place to live, it’s a fun place to read about.

The antimatter next makes it way to Earth-66, which is named after the iconic 1966 live-action Batman series, starring Adam West and Burt Ward as Batman and Robin. The musical cue plays a few notes from the famous theme song, as Burt Ward reprises his role as Dick Grayson. Before we can figure out if that's Ace the Bat-Hound going out for Bat-walkies, the former Boy Wonder shouts one last “holy” as his world is destroyed.

When the scene switches to Earth-38, a man (played by Wil Wheaton) can be seen holding a sign that says “Prepare to meet thy doom. The end of the world is nigh.” This is an homage to the 1980 Superman II film, where a bystander held an identical sign. 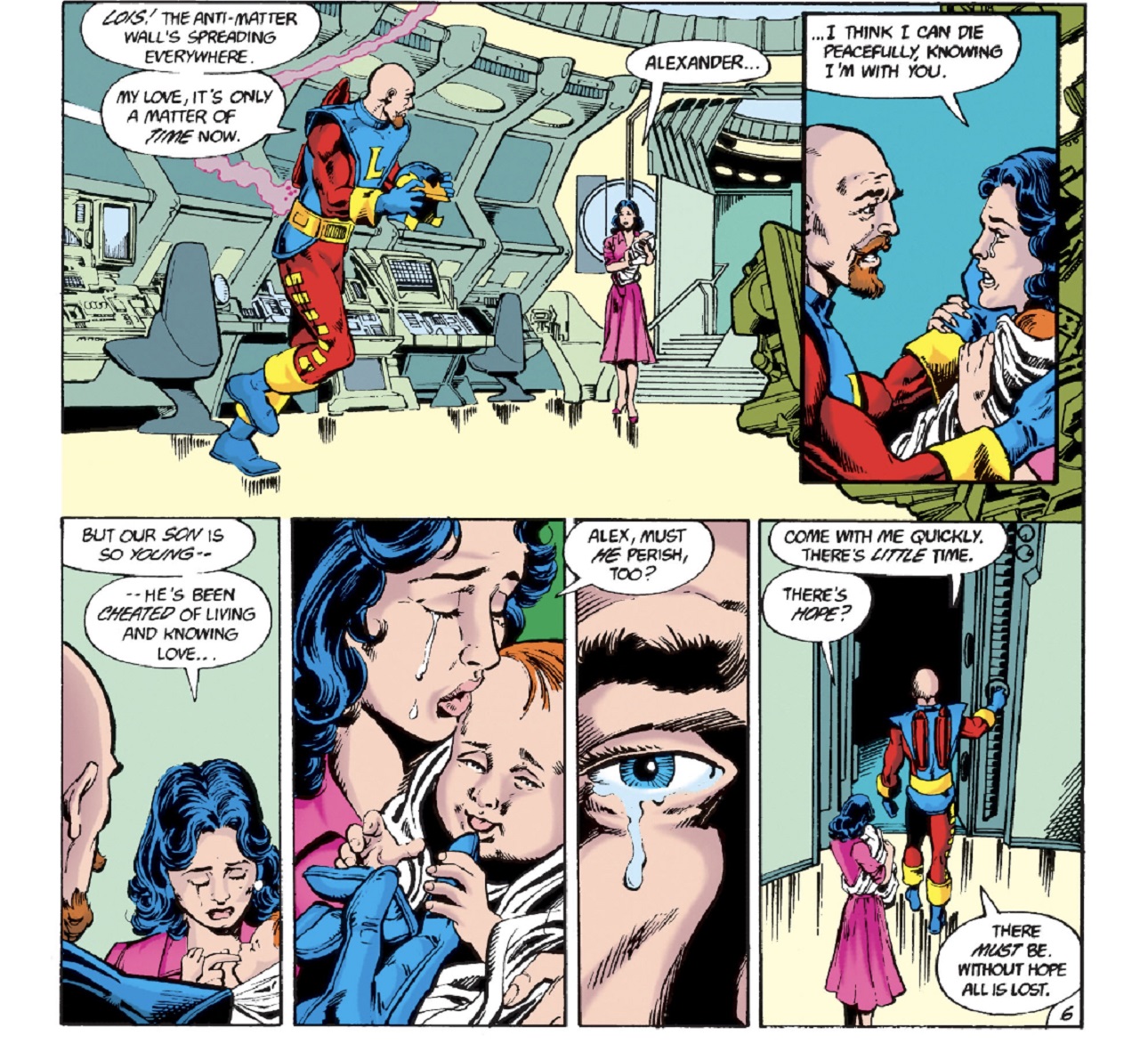 The destruction of Argo City sequence contains a few interesting references. First we meet Jon Kent, the son of Superman and Lois Lane. The human-Kryptonian was first seen in the Convergence: Superman limited series and has grown into a breakout character. The scene where Lois and Clark place their son in a ship to escape the oncoming antimatter wave is meant to mirror the beginning of Crisis on Infinite Earths #1 where Earth-Three’s Lex Luthor and Lois Lane-Luthor save their son Alexander from the oncoming destruction.  As an added bonus, when Lois and Clark say goodbye to Jon, some of their dialogue is directly lifted from Jor-El and Lara’s goodbye to baby Kal-El in the 1978 Superman film. 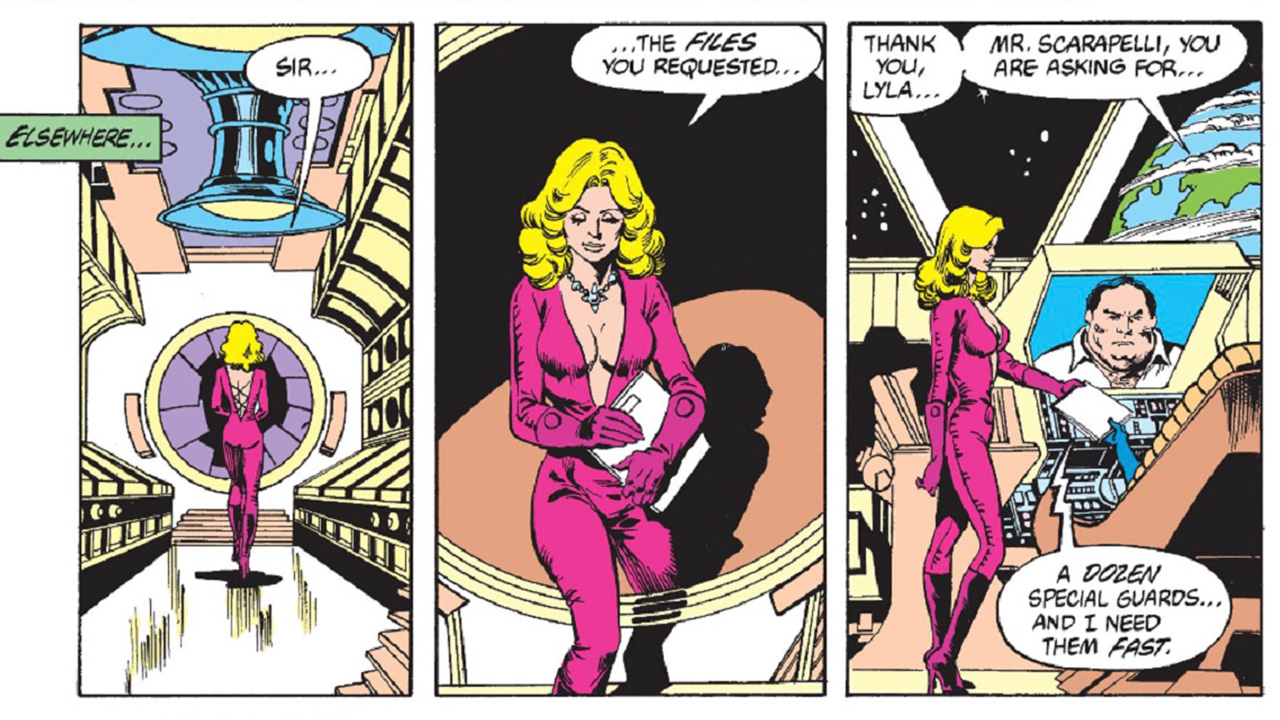 Lyla Michaels, director of A.R.G.U.S. and longtime Arrow supporting character, is now calling herself the Harbinger. In the comics, Lyla acted as a literal harbinger of the Crisis, and appeared in small scenes teasing the upcoming event for years. Her first appearance alongside the unseen Monitor was in 1983’s The New Teen Titans Annual 2. As the Harbinger, Lyla played a big role in the original Crisis on Infinite Earths, and it looks like her television counterpart is following suit. 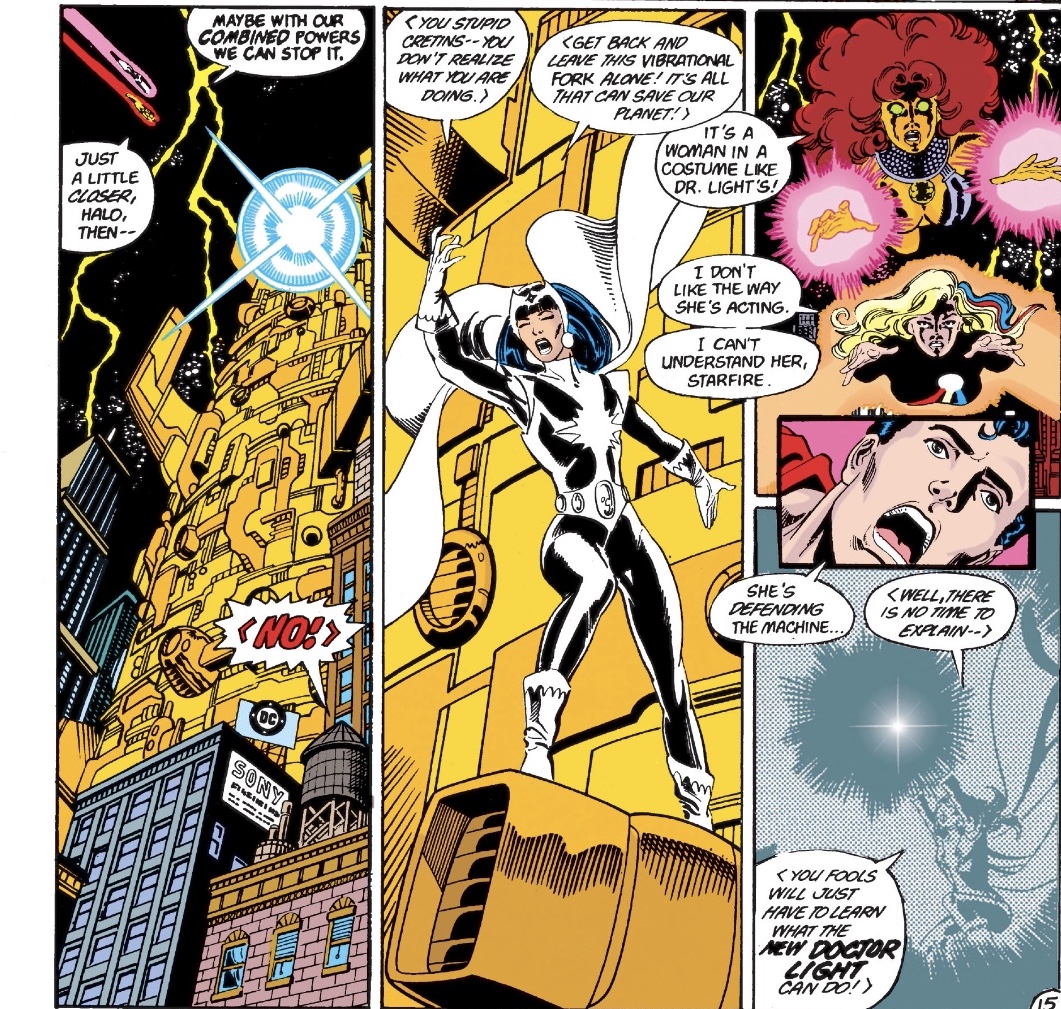 The Quantum Towers are based off of the Cosmic Tuning Forks seen in the original Crisis event. The towers were designed to combine the strength of the remaining Earths so they would be strong enough to repel the Anti-Monitor.

The visit to Earth-16 resolves a continuity error from the Legends of Tomorrow episode “Star City 2046.” In that episode, the Legends traveled to a future version of Star City, but later episodes of Arrow revealed some continuity errors due to timeline discrepancies. The revelation that “Star City 2046” is an alternate Earth clears up the confusion regarding the different futures for Oliver Queen. Interestingly, Earth-16 has also been designated as the multiverse home for the Young Justice animated series. 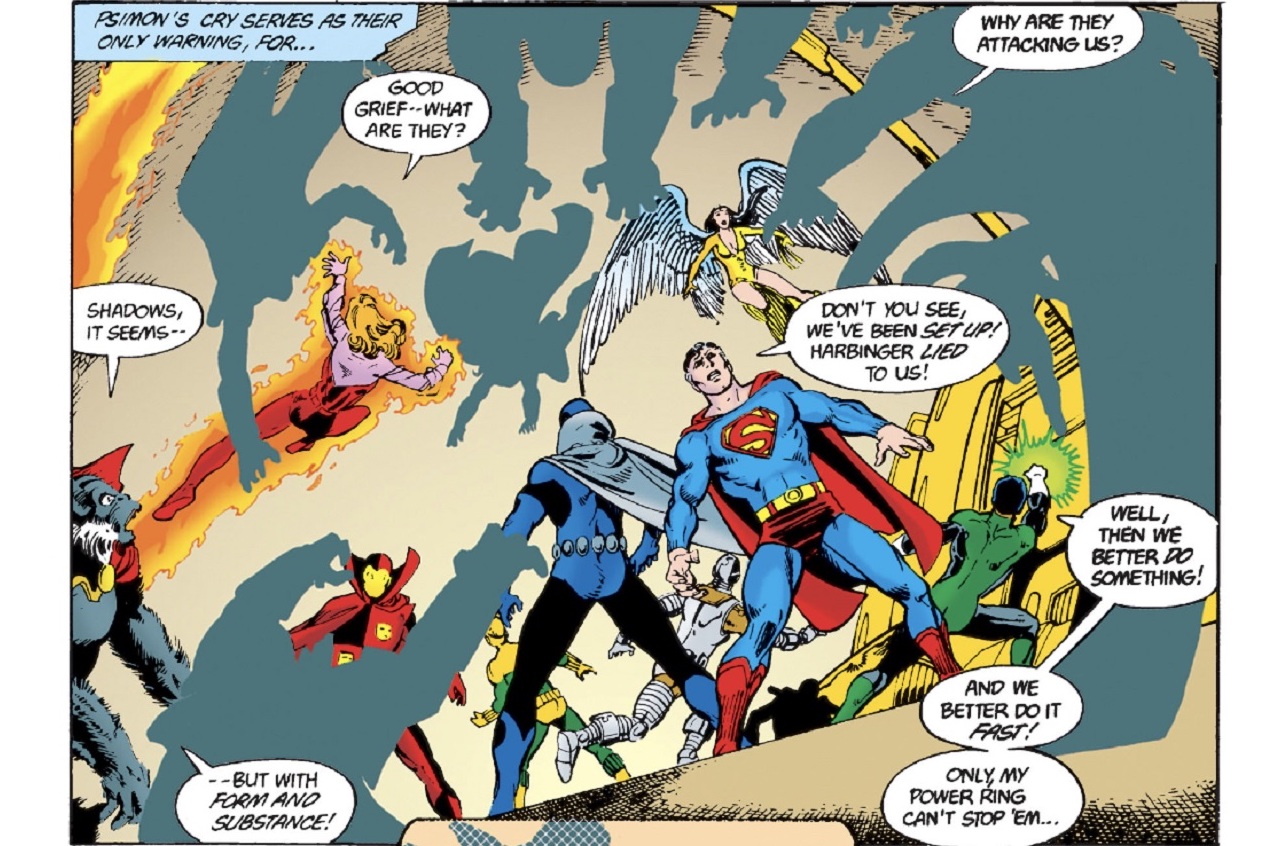 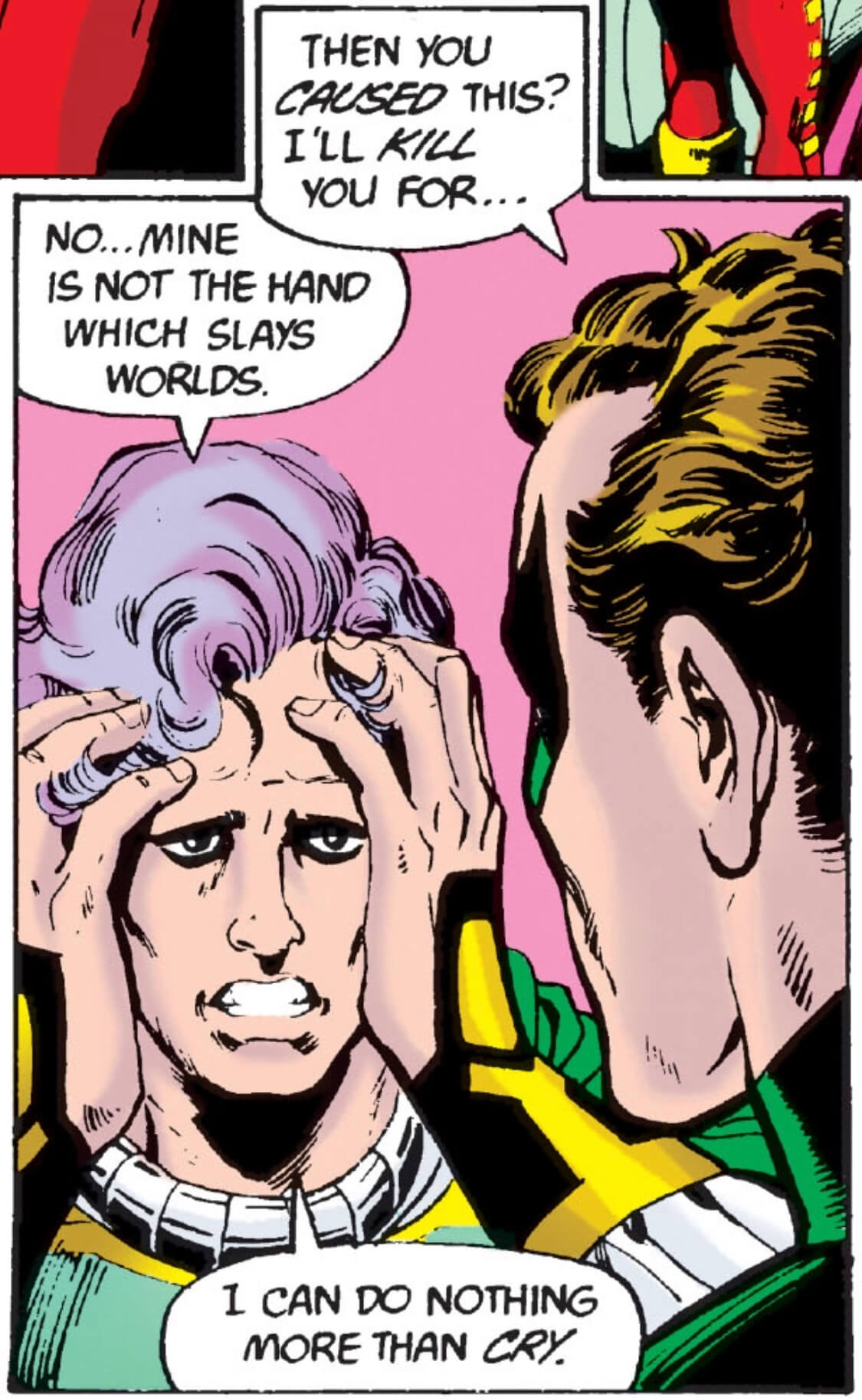 Tom Cavanaugh has played many characters since he first joined the Arrowverse in 2014, and his latest incarnation is one who will be familiar to longtime DC fans. The Pariah was a scientist who accidentally alerted the Anti-Monitor to the presence of his world, causing it to be destroyed. Pariah was then gifted, or cursed, with the power to teleport to any world in the multiverse, and watch as the Anti-Monitor’s reign of destruction continued. His live-action costume was a brilliant translation of his comic book uniform.

As you can see, TV's Crisis on Infinite Earths is the ultimate love letter to DC lore, and we’ve only just begun. Check back here throughout the rest of the week as we unpack the Easter eggs from parts 2 and 3 of this epic crossover.