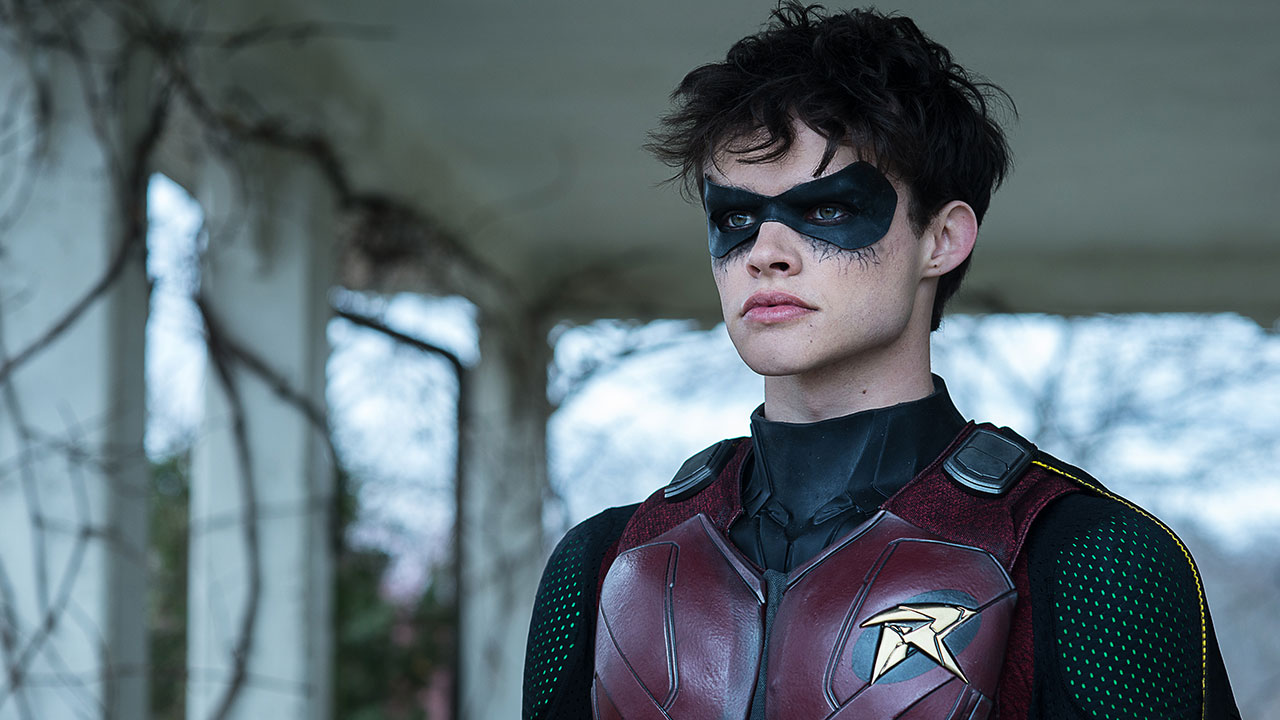 All the Easter Eggs in the TITANS Season 2 Premiere

The Titans are back, bitches! The hiatus has ended and DC Universe's ‘Titans’ has kicked off its second season with an intense episode that mixes pure horror with fun superheroic action. Trigon came to Earth, Dick Grayson confronted Bruce Wayne, a new enemy prepared for action, and Jason Todd annoyed everyone around him. This episode pulled lots of interesting elements from the Teen Titans' rich comics mythology, so let’s take a look at the Easter eggs from “Trigon.”

The Terror of Trigon 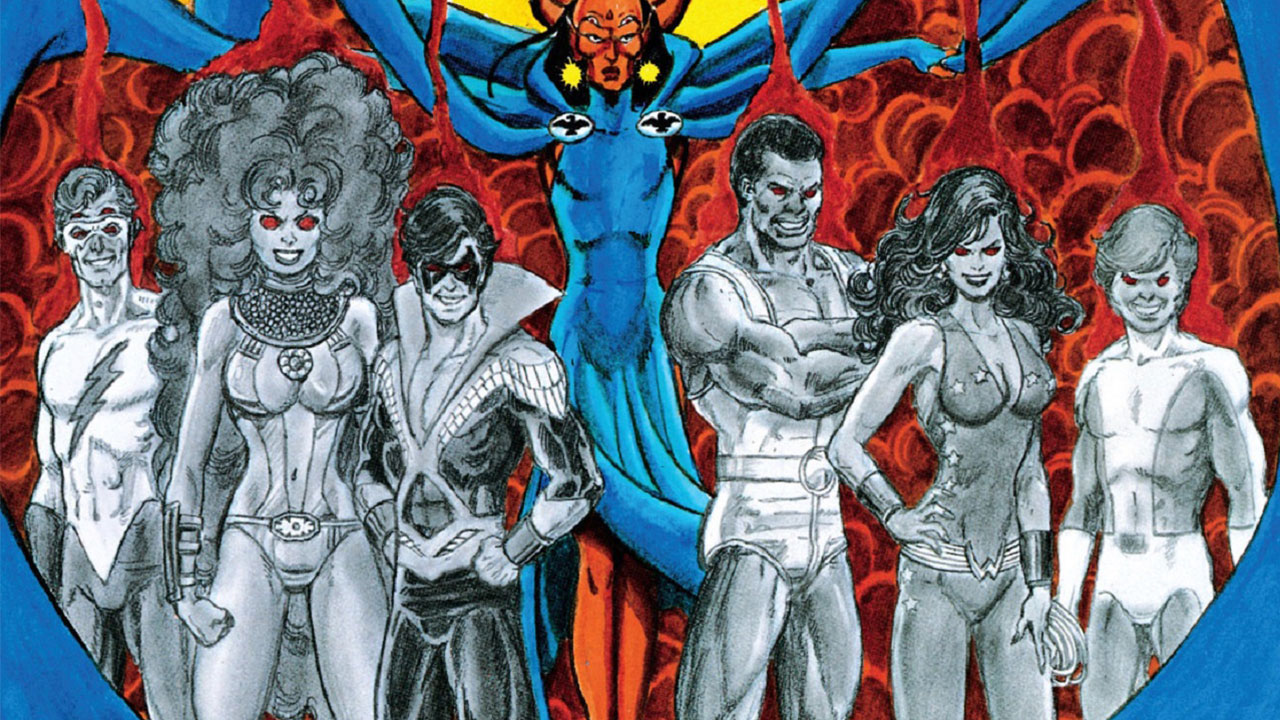 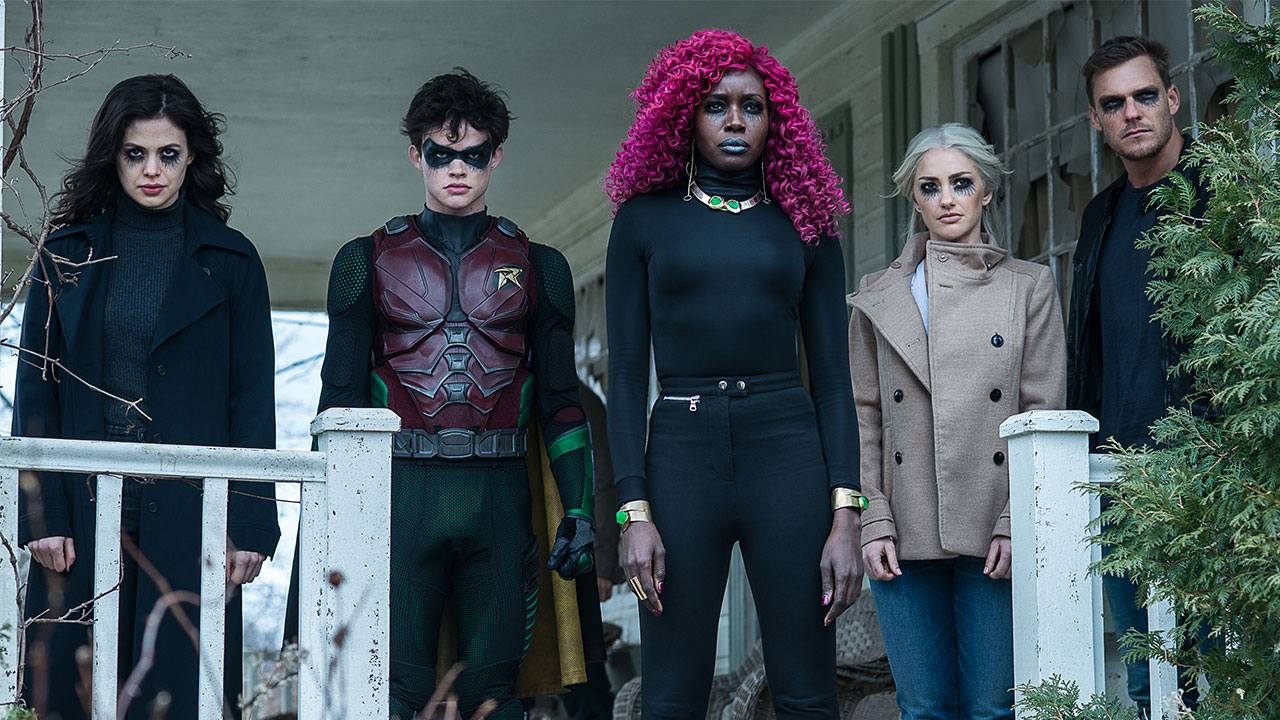 This episode took heavy inspiration from “The Terror of Trigon”, a classic storyline that ran in 1984’s ‘The New Teen Titans’ #1-5 (written by Marv Wolfman and illustrated by George Perez). After the “The Judas Contract”, some fans consider “Terror of Trigon” the second most pivotal chapter of Wolfman and Perez’s game-changing Titans run. In this storyline, Trigon causes the world around him to decay, much as he does in this episode. When the Titans try to stop him, Trigon has them duel their inner darkness, which causes the team to lose and their eyes to get creepy, as it did in this episode. Viewers also got to see Trigon’s true form (hinted at in last season’s “Koriand’r”) as the demonic daddy transformed from the handsome Seamus Dever to a giant red creature with four eyes. Did you really think the demon everyone spoke of was just a man of wealth and taste?

Birds of a Feather

A new season means exciting new team-ups, and this week Hawk and Dove met the new Robin, Jason Todd. While Jason got on almost everyone’s nerves, his relationship with Hank was particularly combative. What did you expect when you put two hotheads together? This is in line with their relationship in the comics. In 1986’s ‘The New Teen Titans’ #20 (written by Marv Wolfman and penciled by Eduardo Barretto), Wonder Girl was forced to put a team of substitute Teen Titans together, including Jason Todd (who'd only recently become Robin) and Hank Hall (who was still processing his brother Don’s death). Hawk belittled Jason at every turn, making it clear he saw the teen as nothing more than a unseasoned rookie. Both versions of Jason have a lot to prove to the more experienced heroes around them. 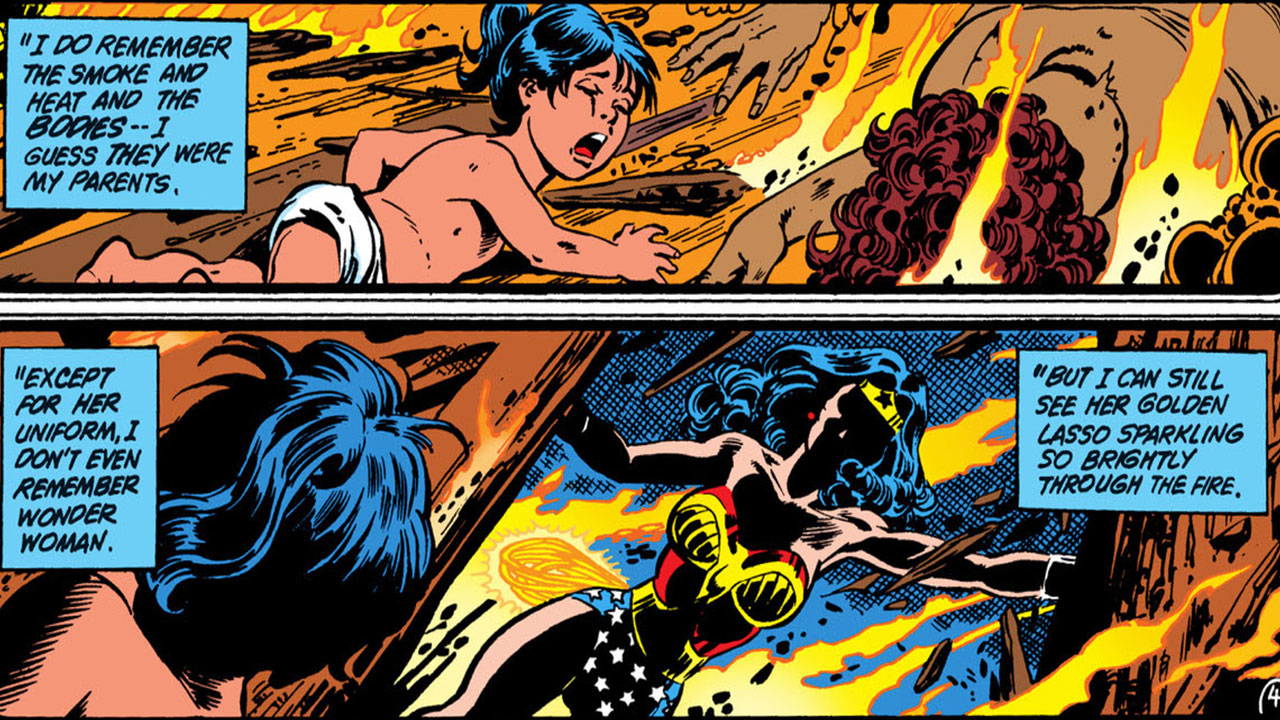 This episode gave us more of Donna’s backstory as Trigon’s traumatic vision brought Wonder Girl back to the fire that changed her life forever. The circumstances of her fiery origins were alluded to last season in the episode “Donna Troy,” and this week let us see how it unfolded. Although her genesis is inspired by the origin given to Donna back in 1969’s ‘Teen Titans’ #22 (written by Marv Wolfman and penciled by Gil Kane), there are a few differences. In the comics version, Donna was much younger and had no memory of her biological father, while this episode portrayed her as a girl old enough to have this memory of her father, though we learned child traffickers were posing as her biological parents. Trigon’s nightmare had Donna confront a pyromaniac who started the fire, but in 1984’s ‘The New Teen Titans’ #38 (story and art by Wolfman and Perez), Dick Grayson learned the blaze was started by an exploding furnace. In any case, the end result is the same in both versions, with Donna Troy rising from the ashes of tragedy to forge her own destiny as Wonder Girl. 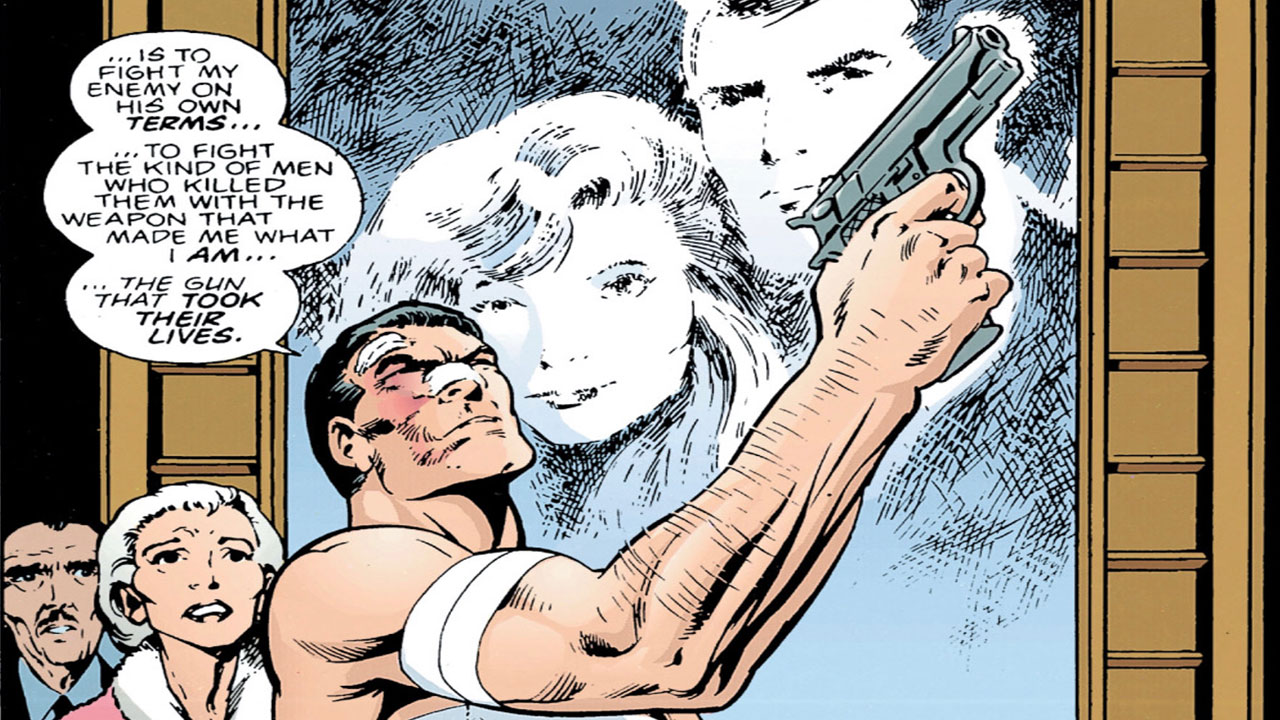 In Jason Todd’s nightmare sequence, he has an intense battle with Dick Grayson in the ruins of the Batcave, which comes to a chilling end when Jason fires the gun that killed Bruce Wayne’s parents. It might seem odd that Bruce keeps the firearm that ended his childhood, but nobody has ever accused Batman of being a well-adjusted person. While the infamous gun has been around since Batman’s first origin story, the idea of Bruce preserving it didn’t come up until ‘Detective Comics’ #575 (written by Mike W. Barr and penciled by Alan Davis), which was part of the “Batman: Year Two” storyline. At first Batman intended to use the gun on a killer called the Reaper, but when he ran into Joe Chill, the man who killed his parents, he considered using the firearm as a way to obtain poetic revenge. Ultimately, Bruce didn’t kill either man, and had the gun sealed away. A few other stories have presented alternate takes on what Bruce did with the gun, sometimes keeping it in the Batcave. Most recently, ‘Detective Comics’ #1000 saw him melt the firearm into protective armor for his Batsuit. No matter what Bruce’s intentions for the gun were, we don’t think he ever foresaw it being used to kill Dick Grayson in a demonically induced nightmare. 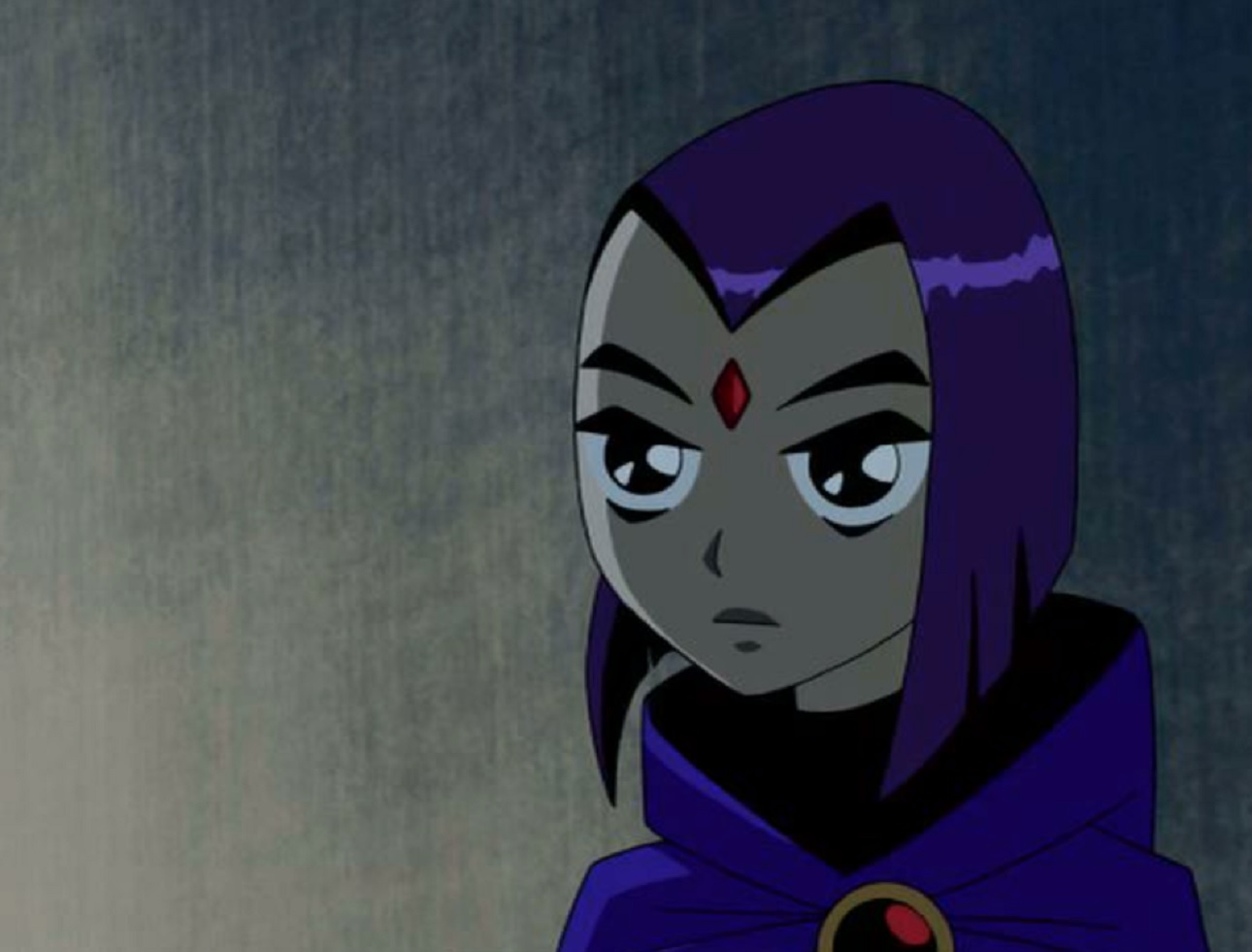 Trigon isn’t the only member of his family who got a new look this week. Thankfully, Raven didn’t transform into a demon, but she did get her heart pulled from her body, which then turned into a jewel that was placed on her forehead. The experience appears to have made Rachel’s skin slightly paler (not that she was tan to begin with); and she now looks like the splitting image of her counterpart in the 2003 ‘Teen Titans’ animated series. Raven’s jewel, first seen in 1981’s ‘The New Teen Titans’ #4 (by Wolfman and Perez), is mostly cosmetic in the comics. Although the 2016 animated film ‘Justice League vs. Teen Titans’ reimagined it as a gateway to an interdimensional prison she was able to trap her father in. 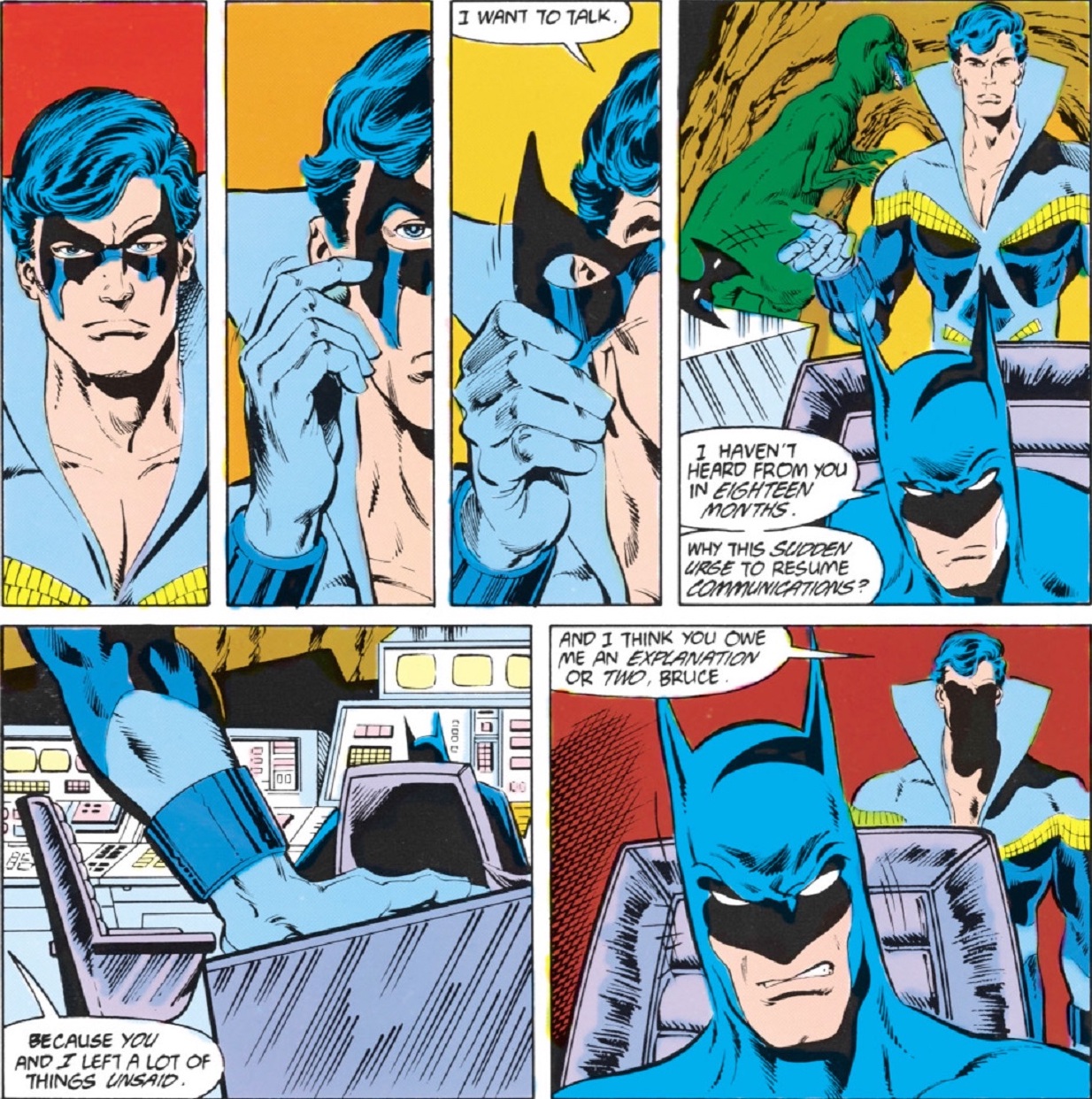 With the Trigon business resolved, it was time for Dick Grayson to get some closure on something that had been weighing on him heavily through the first season – his strained relationship with Batman. While the conversation may have been awkward and uncomfortable for both men, it was good for Dick to finally let go of his resentment, and for the original Dynamic Duo to reach peace. In fact, they’re lucky things went as well as they did, because the conversation was a lot more charged in the comics. When Dick finally returned to Wayne Manor for the first time in ‘Batman’ #416 (written by Jim Starlin and penciled by Jim Aparo), his conversation with Bruce devolved into a shouting match. Dick still hadn’t gotten over the way his partnership with Bruce had ended, while Batman still had mixed feelings about his former Robin finding his own way. It took years for Bruce and Dick to patch things up for good, which happened after a long, revealing conversation in 1994’s ‘Robin’ #14 (written by Chuck Dixon, penciled by Phil Jimenez and John Cleary). If you enjoyed this week’s conversation between Bruce and Dick, then both comics are recommended reading.

As a bonus, do you remember last season when Rachel was watching ‘Game of Thrones?’ If she ever meets Bruce Wayne, do you think she’ll recognize him as Jorah Mormont? 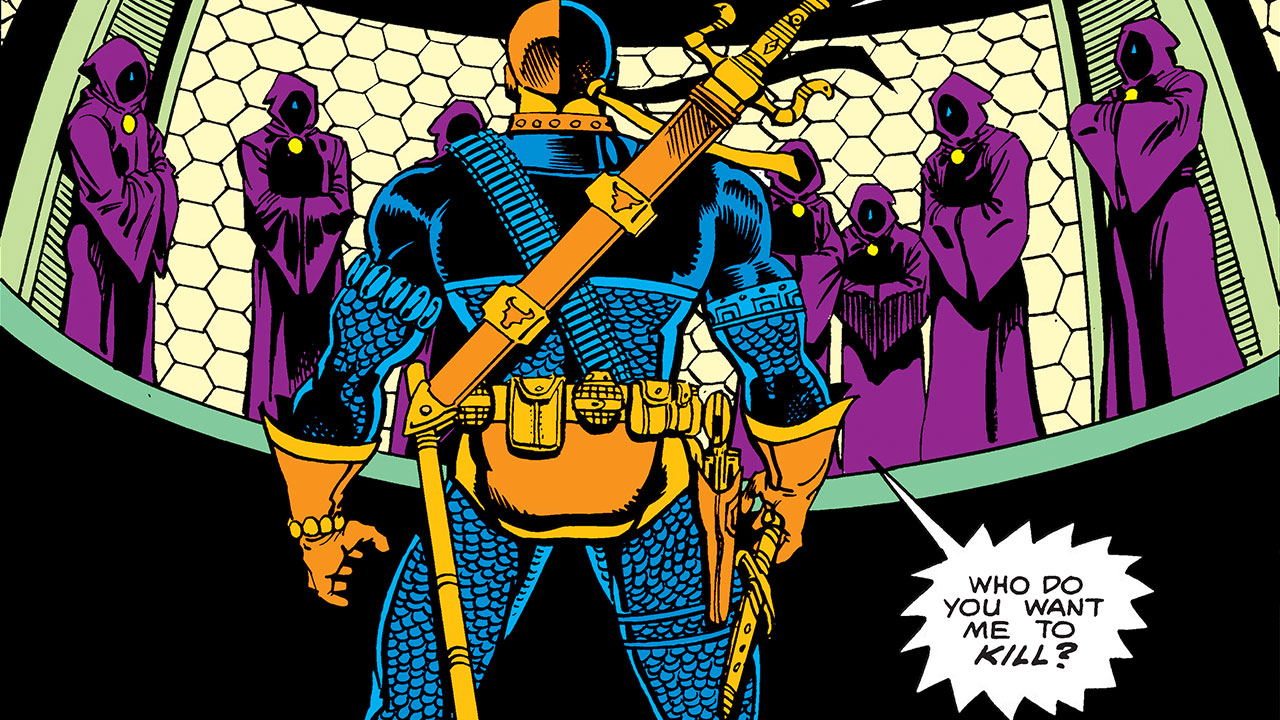 Trigon might be in the rearview mirror now, but don’t relax yet, Titans -- because the end of this episode introduced a new enemy! Slade Wilson, the mercenary known as Deathstroke the Terminator, first appeared in ‘The New Teen Titans’ #2 (story and art by Wolfman and Perez) and quickly became the most formidable foe the team had ever faced. Slade received a special formula while he was in the military, giving him enhanced human strength, agility, and brain power. After leaving the army, Slade sold his abilities to the highest bidder, and lived life as a mercenary. The Teen Titans started out as an assignment he took from a group called H.I.V.E. but as the years passed things became personal. Since Slade’s children Rose and Joe will be introduced this season, we have a feeling future Easter egg columns will be diving deeper into Deathstroke’s backstory. So stick around to learn more! 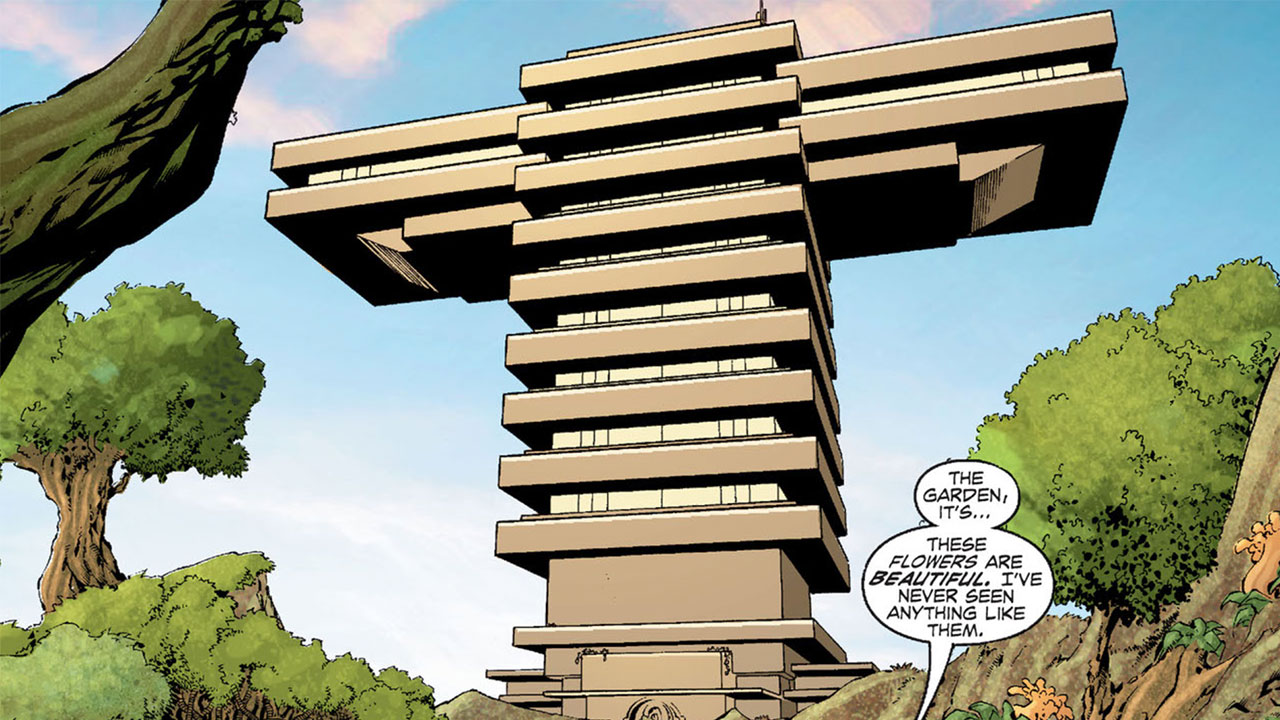 A new season means new beginnings, which made this a perfect time for the Titans to set up shop in their former San Francisco headquarters. While the comic book version of the team is usually based in New York, there was a long stretch where they moved their operations to the Golden Gate City. After the (temporary) death of Donna Troy -- and the dissolution of Young Justice -- Cyborg, Starfire, and Beast Boy built a new Titans Tower in San Francisco for the purpose of mentoring the next generation of heroes. The new base was unveiled in 2003’s ‘Teen Titans’ #1 (written by Geoff Johns and penciled by Michael McKone), and it served as their headquarters for all 100 issues of the series.

What a premiere! Join us next week as we meet Rose Wilson and dive into more comic book Easter eggs.