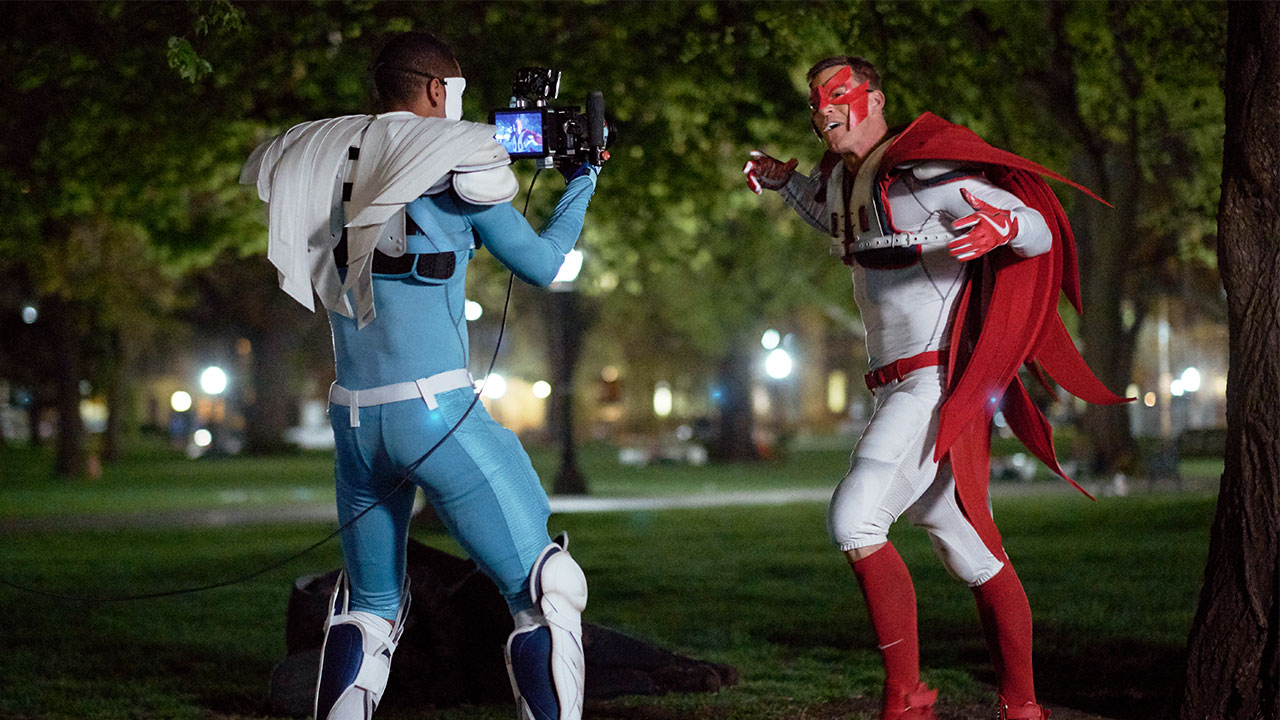 All the Easter Eggs in TITANS Episode 9: “Hank and Dawn”

This week, on Titans episode 9 (watch “Hank and Dawn” here), we learned how the Hawk and Dove team began. For sharp-eyed comic fans, there were plenty of homages to decades of the duo's lore… 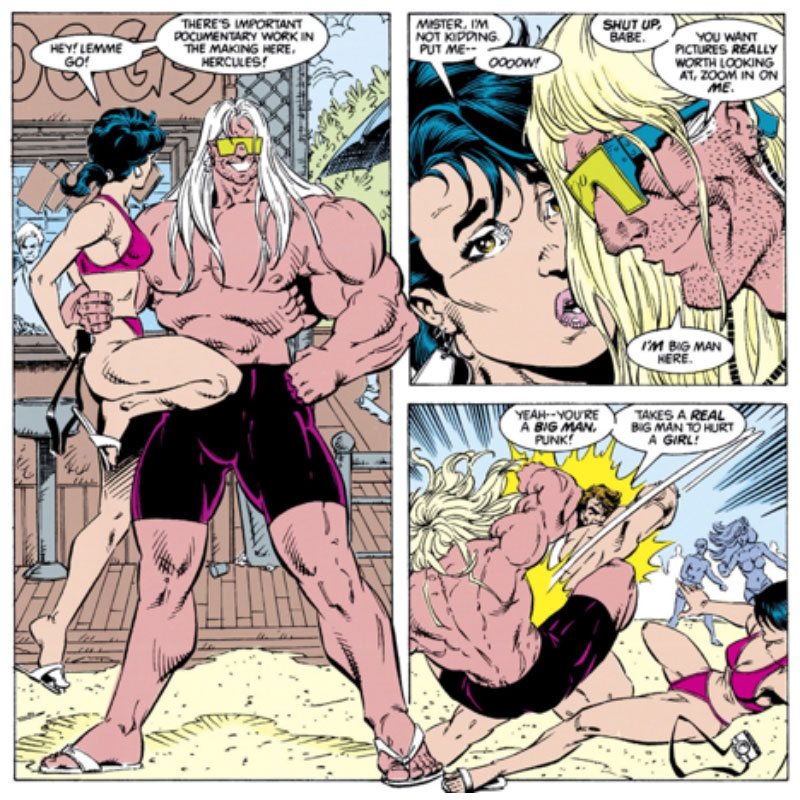 The opening scene's flashback hits us with an Easter egg right away, as the newly christened Hawk and Dove go after a man named Dwayne Wainwright. Hank first came across Dwayne when he got handsy with his girlfriend on the beach in Hawk and Dove #5 (written by Karl Kesel with Barbara Randall Kesel, art by Karl Kesel with Rob Liefeld, read it here). Dwayne had super strength and could create explosions at will. He even had his own super-villain name; Sudden Death! Thankfully, it seems the TV version of Dwayne was easier to deal with. 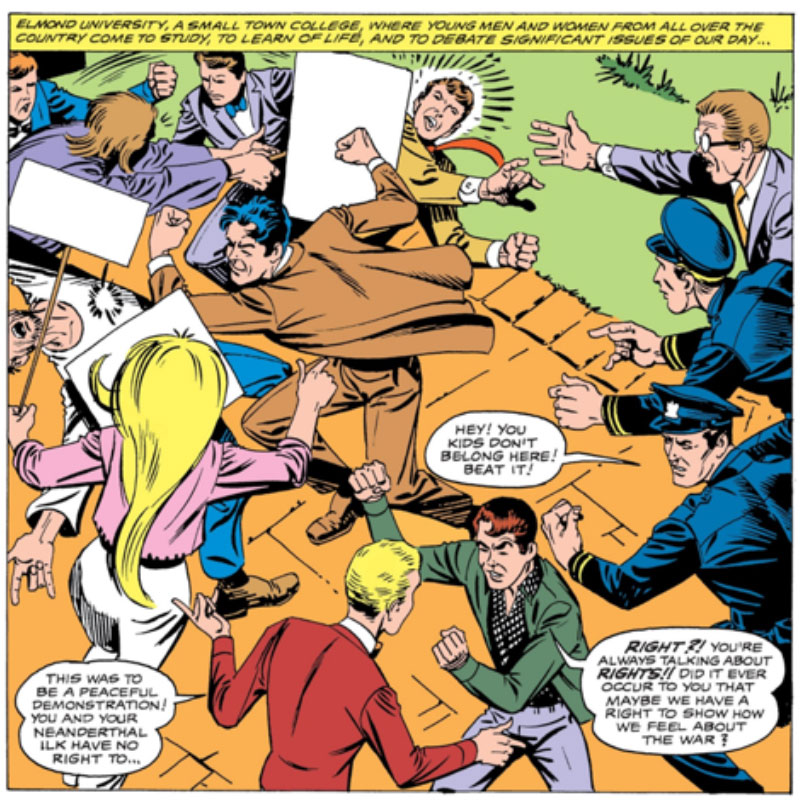 During the flashback to Don and Hank’s youth, we see the boys attend Elmond Private School. This is consistent with their comic-book roots, as Elmond is the city that Hawk and Dove operated from in their original run of comics. The school was first seen in Showcase #75 (written by Steve Skeates and penciled by Steve Ditko).

Did anybody catch the name of Hank’s football team, the Kesel Lions? The name Kesel is an important one to Hawk and Dove lore since Dawn Granger was created by the husband-and-wife team of Karl Kesel and Barbara Randall Kesel. Together, they two of them wrote the second and third volume of Hawk and Dove in the 1980s.

What do Don Hall and Dawn Granger have in common? Aside from being the superhero Dove, they both have similar tastes in t-shirts. This week, Don Hall sported a Superman shirt, just like the one Dawn wore in episode 2: “Hawk and Dove”. We already know that the Justice League exists in this world, could more direct references to Superman be far behind? 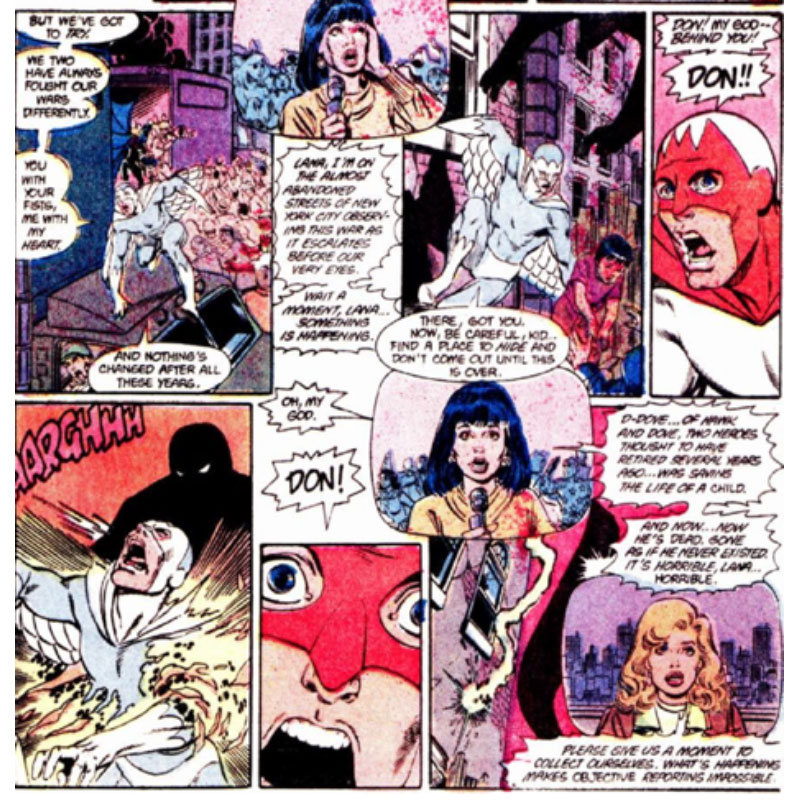 No matter what continuity he’s in, poor Don Hall can’t seem to catch a break. While Titans' Don was killed by an out of control automobile, his comic-book counterpart lost his life while protecting Earth from Shadow Demons in Crisis on Infinite Earths #12 (written by Marv Wolfman and penciled by George Perez). Unfortunately for poor Don, this wouldn’t be the only death he had to endure! Due to the reality-altering events of Crisis, flashbacks of Don’s death were changed to show he died protecting children from a falling building. During the mini-series Titans Hunt (written by Dan Abnett, penciled by Paulo Siqueira and Geraldo Borges, read it here), it was revealed that Mr. Twister altered everyone’s memories, and that he was the one who had murdered Don. Although the circumstances of his demise keep changing, Don is always fondly remembered as Dove for his legacy of heroism. 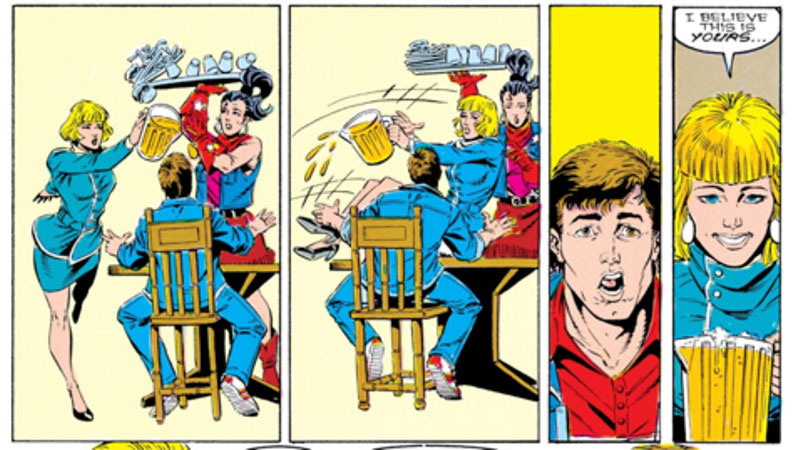 While bonding over their shared grief, Dawn impresses Hank by catching a falling drink.  This was actually how Hank and Dawn met back in Hawk and Dove #1 (written by Karl Kesel and Barbara Randall Kesel with art by Rob Liefeld). No matter the media she appears in, Dawn will never let a drink hit the ground! 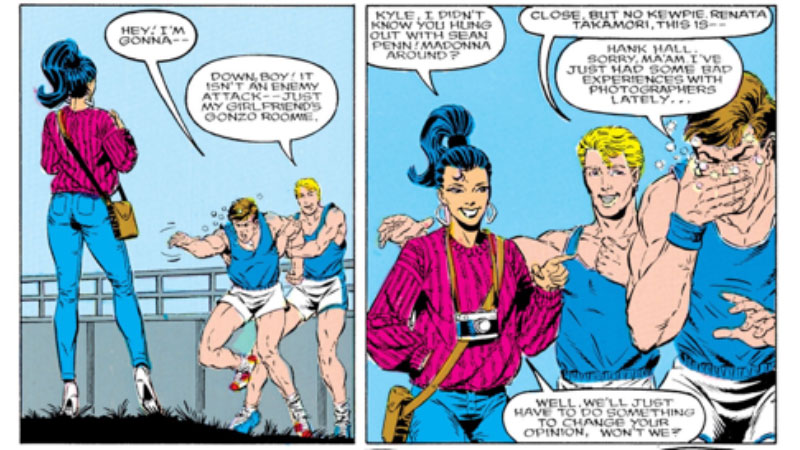 When Don confronts his brother at a frat party, Hank tries to coax him into staying by telling him “Ren’s around here somewhere”. Ren Takamori (first appearing in Hawk and Dove #1) was Hank’s longtime girlfriend while he attended Georgetown College. Ren’s hobby was photography, and Hank once accused her of being the new Dove, before learning that it was Dawn. Ren knew the secret identities of Hawk and Dove but kept it secret and often helped them cover up for their friends.

During the aforementioned frat party scene, Hank also mentions Linda. The lovely Linda Kieves first appeared in Hawk and Dove #3 (written by Steve Skeates and penciled by Gil Kane, read it here). She was a girl whom both Don and Hank were sweet on. Although Linda wound up marrying Hank in a few alternate reality tales, she made it clear to him that she preferred Don, when she chastised him for missing his brother’s funeral in 1988's Hawk and Dove #1. 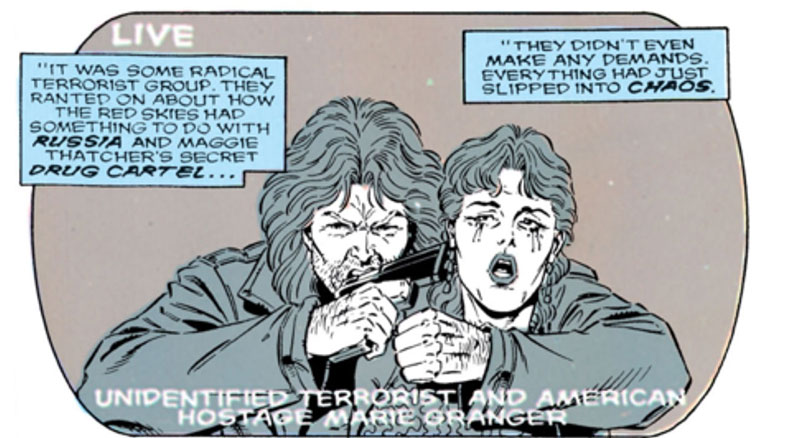 This week we were introduced to Dawn’s mother Marie Granger. In the comics, Marie was a diplomatic courier who often traveled the world. While we don’t know the occupation of Titans' Marie, perhaps her accent is a hint she’s just as worldly as her comic book self. Marie first appeared in Hawk and Dove #5 (written by Karl Kesel and Barbara Randall Kesel with art by Rob Liefeld). And Dawn’s first mission as Dove was rescuing her mother from a terrorist group in London. 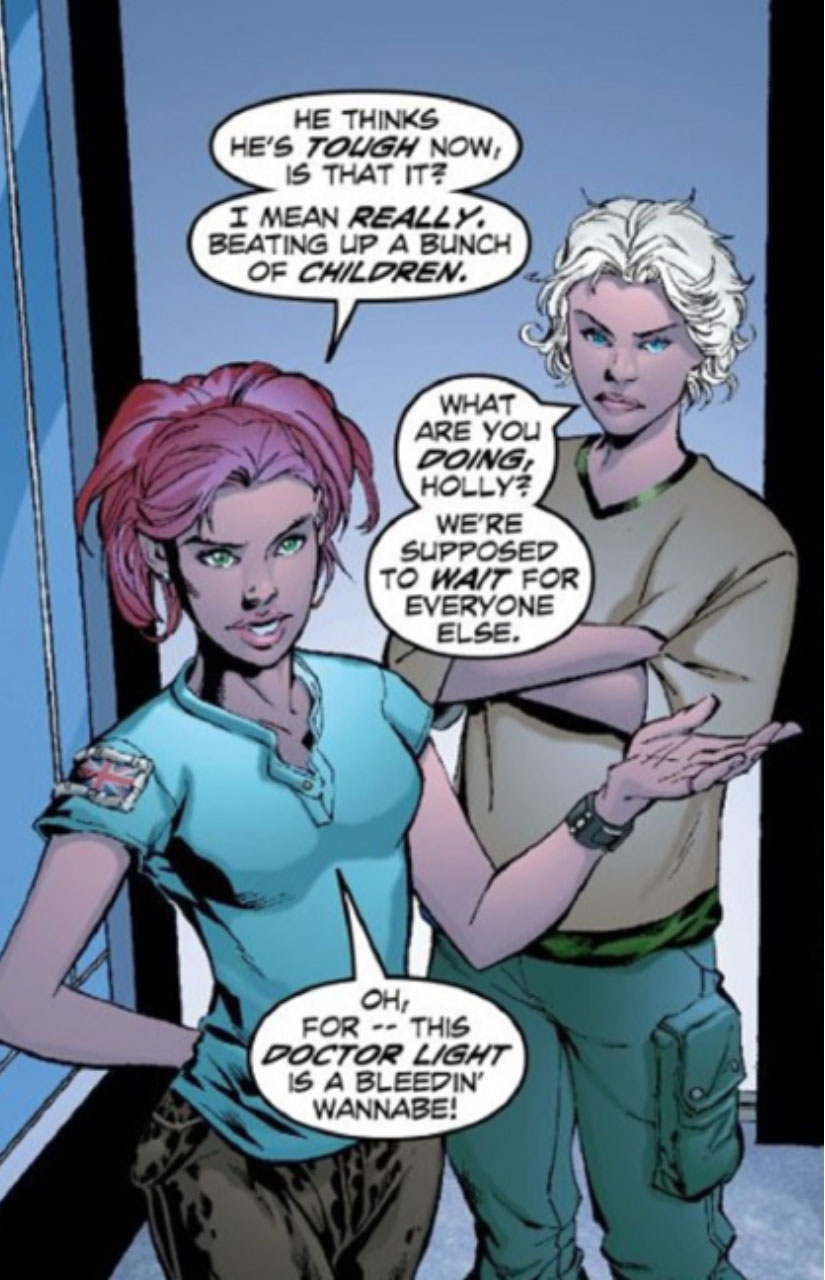 During a tense lunch conversation, Marie mentions Dawn’s rebellious sister Holly. We first met Holly in Teen Titans #22 (written by Geoff Johns and penciled by Mike McKone), when it was revealed the Lords of Chaos and Order chose her to be the new Hawk after the death of Hank Hall. Holly was the rebellious black sheep of the Granger family, and judging from the way she was described in this episode, her TV counterpart is very similar. Tragically, Holly lost her life during the events of Blackest Night, while Hank was revived. 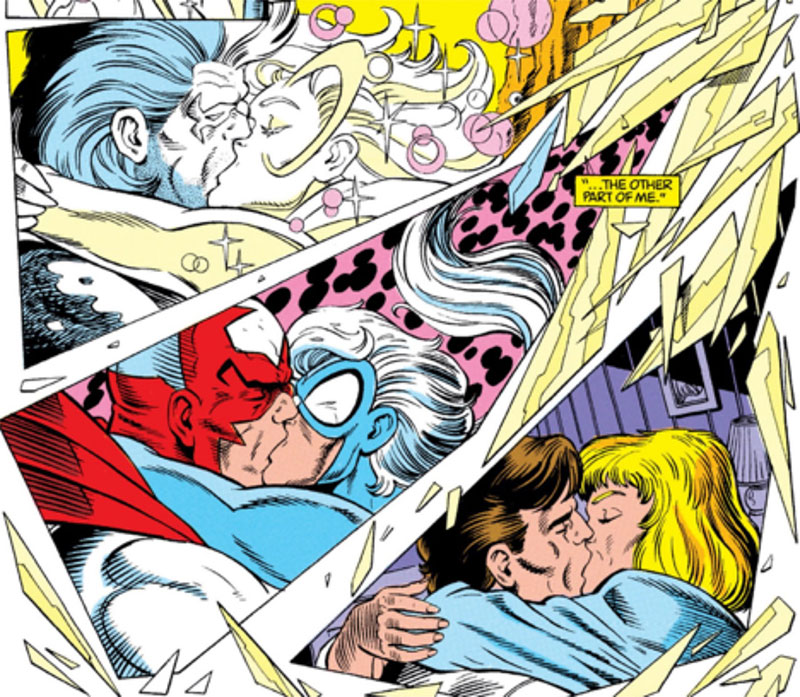 During this week’s episode, we learn the beginnings of Hank and Dawn’s tumultuous romantic relationship. While they’ve never been an official couple in the comics, that hasn’t stopped their friends, family members, and even the Lords of Chaos and Order from trying to pair them up! In Hawk and Dove #17 (written by Karl Kesel and Barbara Randall Kesel, penciled by Greg Gulder, read it here), the Lords of Chaos and Order possessed Hank and Dawn, and tried to have them breed a super-child. The experience left Hank and Dawn shaken and questioning their relationship. Although they decided to remain friends, the experience took a toll on Hank’s girlfriend Ren. Nobody ever said dating a superhero would be easy! 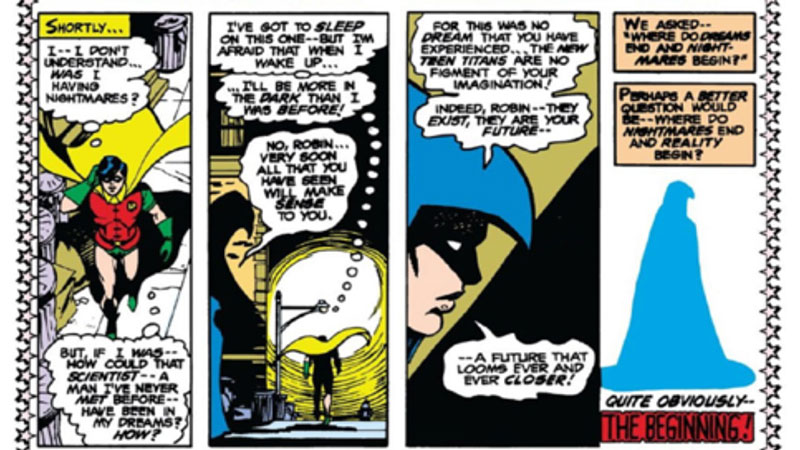 Throughout the episode, we see Rachel invading Hank and Dawn’s dreams, crying out for help. Finally getting through to Dawn, she instructs her to find Jason Todd. Raven recruiting a team via dream commands is something very familiar to Titans fans, since it’s how she brought the team together in DC Comics Presents #26 (written by Marv Wolfman and penciled by George Perez, read it here). During her first appearance, Raven invaded Dick Grayson’s dreams and encouraged him to form the New Teen Titans, thus beginning the team's legendary run. In this episode, it seems like she’s gathering forces for something big. Let’s hope they can handle whatever episode 9 ("Koriand’r") throws their way!