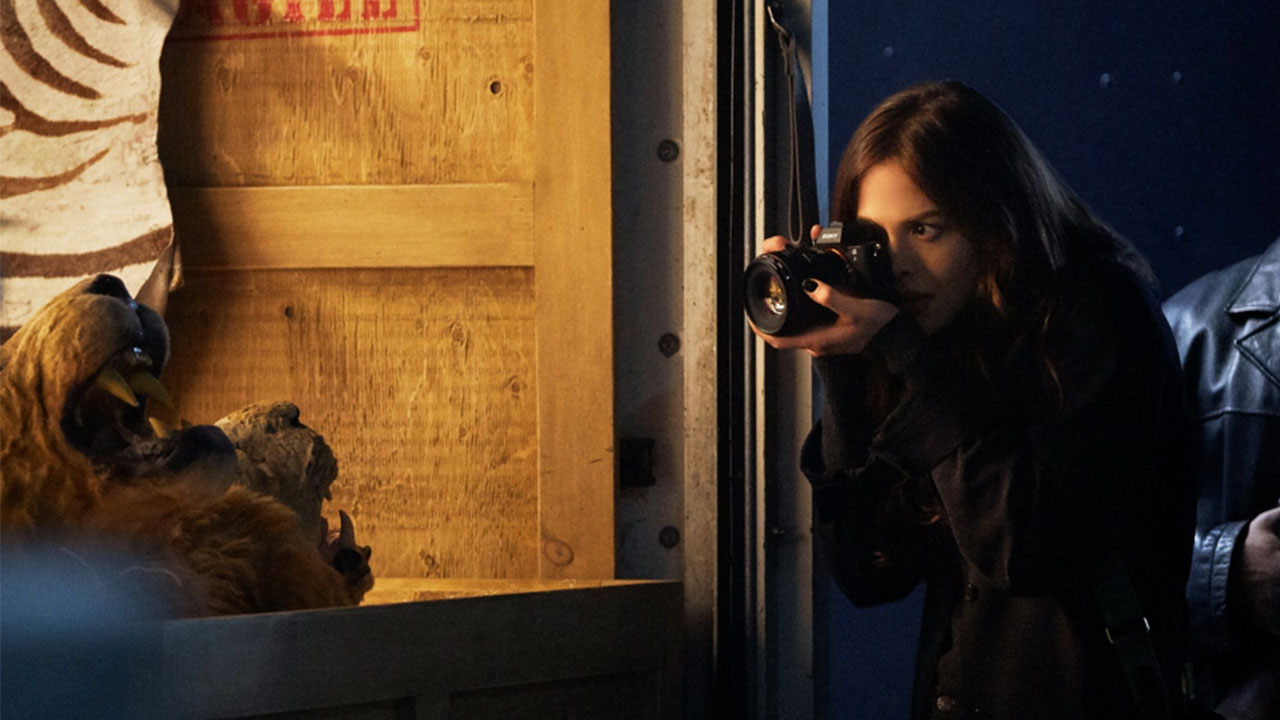 All the Easter Eggs in TITANS Episode 8: “Donna Troy”

In the eighth episode of Titans (watch “Donna Troy” here), Dick Grayson reunites with his childhood ally Donna Troy. Donna has strong ties to the Teen Titans' comic books, so naturally the episode was heavy with comic references! Let’s take a look at some of this week’s Easter eggs…

Donna Troy’s name has appeared in Titans before, when she was listed in Dick Grayson’s contact list. Did you know that for the first four years of her publication history she didn’t have a secret identity? She was simply Wonder Girl, although her teammates would playfully call her “Wonder Doll” or Wonder Chick." But Donna had no life outside of Paradise Island and her Titans activities, so there was never a need for a real name….until the group discovered she had nowhere to live in Teen Titans #22 (written by Marv Wolfman and penciled by Gil Kane, read it here). When Wonder Girl met her roommate Sharon Tracy, Roy Harper introduced her as Donna Troy for the first time. Years later, in The New Teen Titans #38 (written by Marv Wolfman and penciled by George Perez), Wonder Girl discovers that Donna was actually her real birthname, and that a repressed memory caused her to choose it as her alias. You can read more about Donna’s history here. 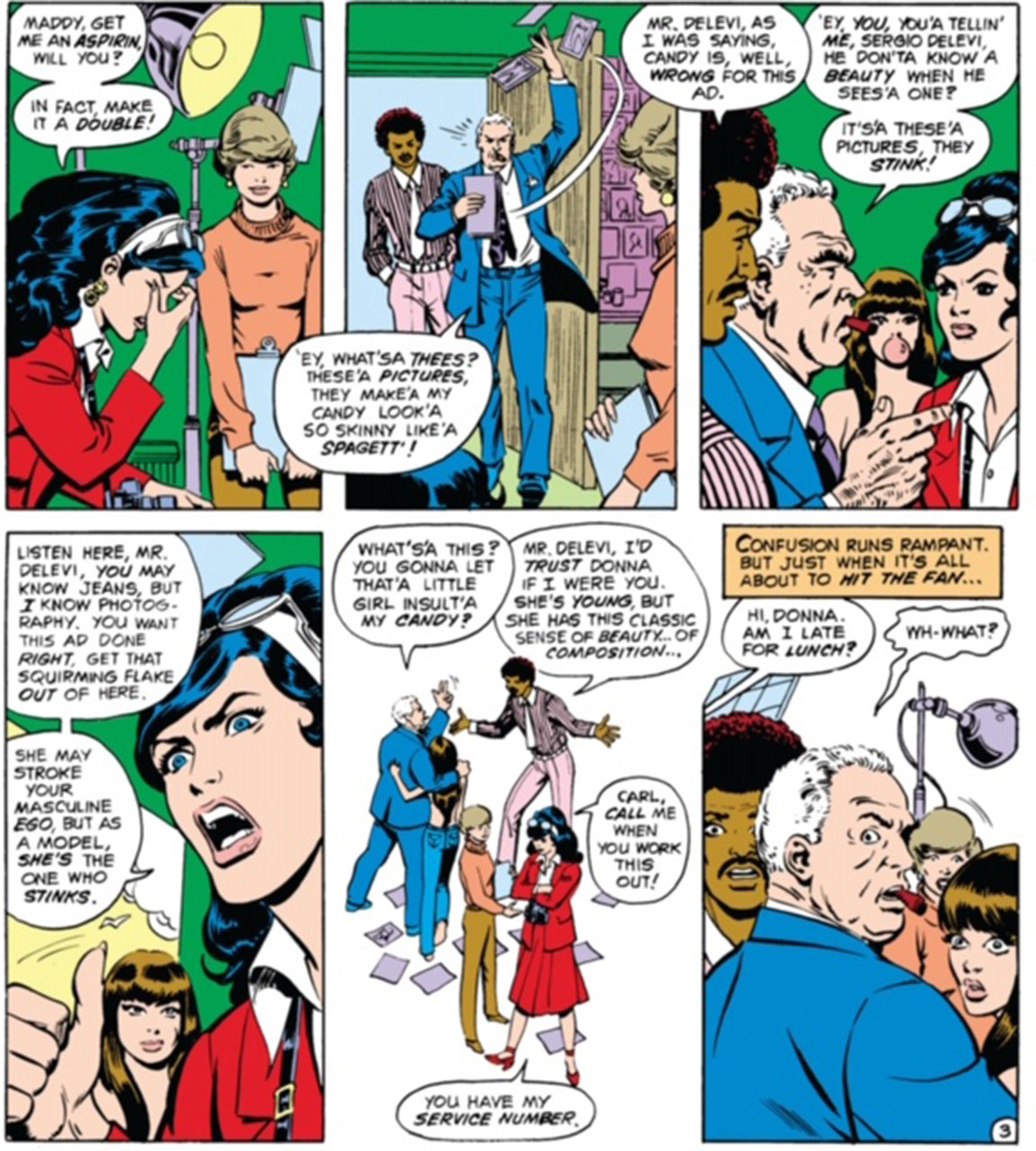 Donna Troy is pretty handy with a camera, a talent she shares with her comic book counterpart. In The New Teen Titans #8 (written by Marv Wolfman and penciled by George Perez, read it here), we learn Donna established herself as a professional photographer some time after the first group of Teen Titans broke up. Donna specialized in advertisements and modeling, with her teammate Koriand’r as a frequent subject.

During Donna’s heart-to-heart with Dick, she mentions Diana taking her in after a fire had destroyed her life. That’s a direct reference to the origin story she tells her teammates in Teen Titans #22 (written by Marv Wolfman and penciled by Gil Kane, read it here). Wonder Woman had rescued Donna from a fire when she was a baby but was unable to determine her identity. Donna was taken to Paradise Island and adopted as Wonder Woman’s sister. She then underwent treatments from the "Purple Ray," which gave her most of Wonder Woman’s powers.

Dick Grayson finally solved the mystery of Donna’s past in The New Teen Titans #38 (written by Marv Wolfman and penciled by George Perez). It turned out Donna had been in various foster homes and wound up in the hands of child traffickers before the fire started. Thanks to Dick’s detective work, Donna was able to get some closure, and reunite with her former foster parents. 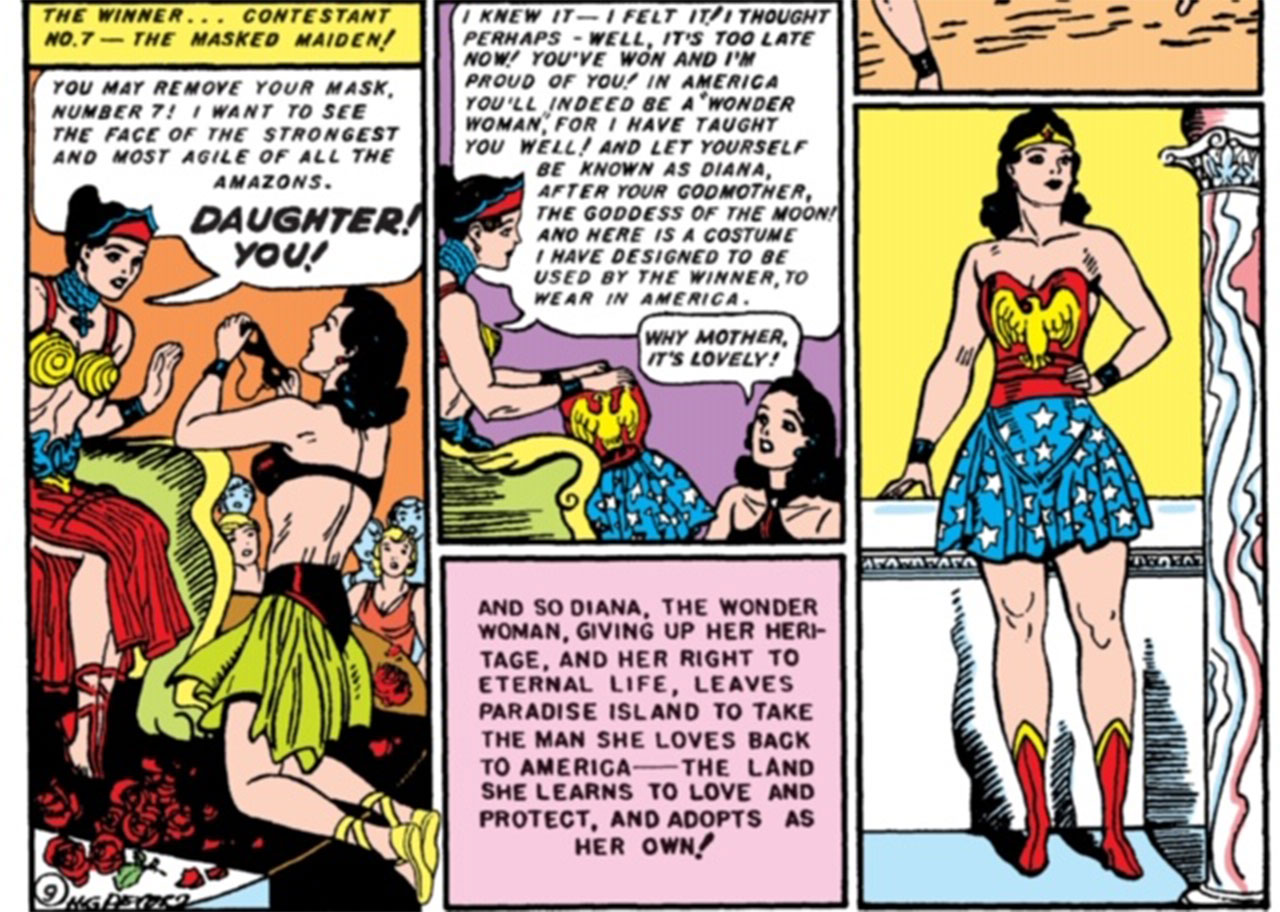 Donna drops a few references to Diana, a.k.a. Wonder Woman, who first appeared in All Star Comics #8 (written by William Moulton Marston and penciled by Harry G. Peter). Wonder Woman is one of DC Comics' flagship heroes and is beloved throughout the world as a feminist icon. Despite their sisterly relationship, Wonder Woman and Wonder Girl didn’t team up as often as Batman and Robin, and Donna was rarely portrayed as Diana's sidekick. Although they had a few on-panel interactions, they didn’t have their first team-up until Adventure Comics #461 (written by Jack C. Harris and penciled by Jack Abel) -- 14 years after Wonder Girl’s first appearance! 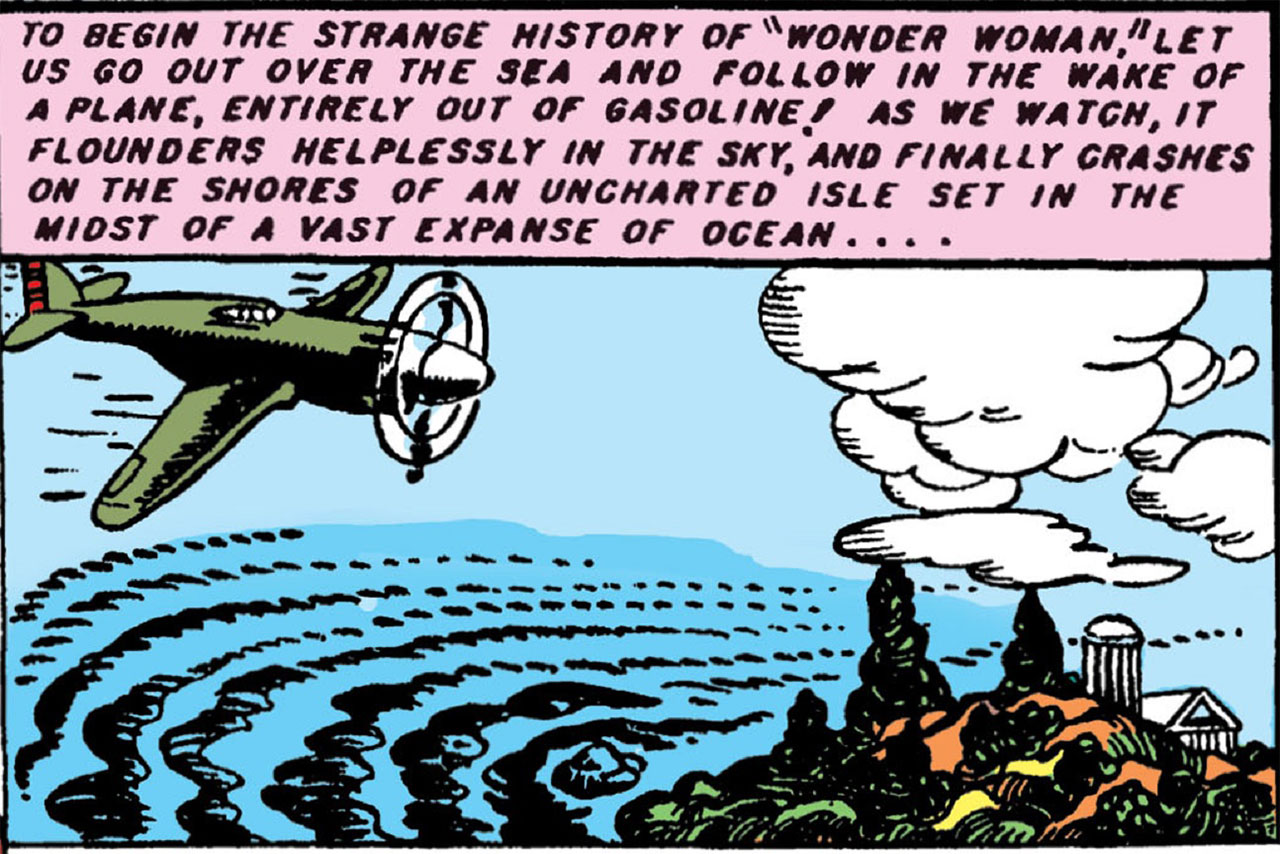 In this episode, Donna makes a passing reference to Themyscira, her childhood home. Themyscira is also the island home of Wonder Woman and the Amazons, first seen in All Star Comics #8 (written by William Moulton Marston and penciled by Harry G. Peter). For years it was known as Paradise Island, and it was given the name Themyscira for the first time in 1987's Wonder Woman #1 (written by Greg Potter and George Perez, and penciled by Perez, read it here). 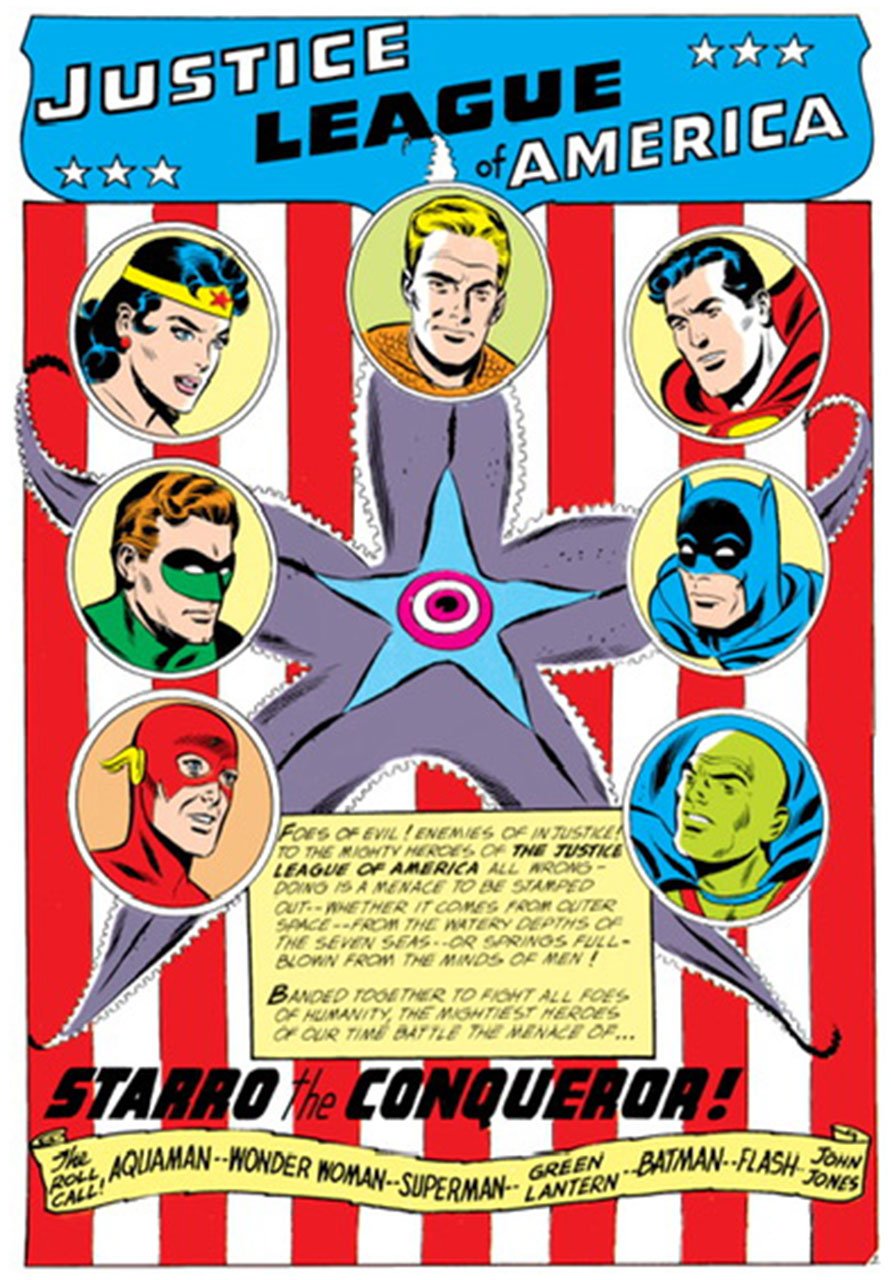 Dick and Donna, however, didn’t always have to wait upstairs during Justice League meetings. Dick got to join the team in JLA #69, and Donna became a member in Justice League of America (volume 2) #41.

In the opening flashback of this week’s episode, young Dick Grayson is very shaken by a recent battle with the Joker. The Joker first appeared in Batman #1 (written by Bill Finger and penciled by Bob Kane, read it here); and Robin had plenty of good reasons to be afraid of him -- the Boy Wonder was seconds away from becoming a victim of his deadly Joker venom during their first encounter! Only a timely intervention by the Dark Knight saved Robin from certain death.

“I wonder what the Penguin’s doing right now” 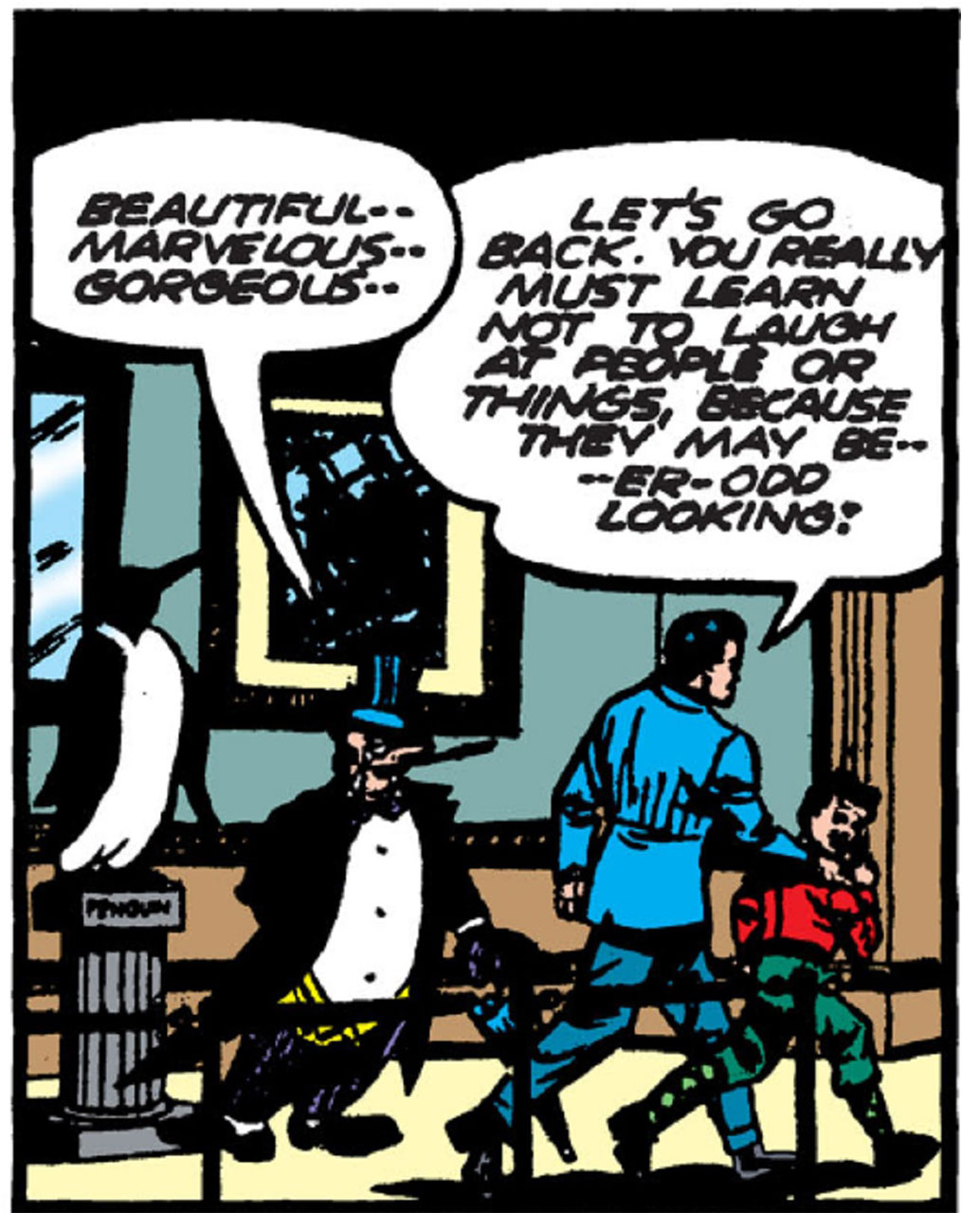 While attempting to make small talk at Donna Troy’s photo exhibit, Dick Grayson can’t help but ponder what his old enemy the Penguin is doing. It’s no wonder that the museum setting is making Dick think of the Penguin, because that’s where he first met him in Detective Comics #58 (written by Bill Finger and penciled by Bob Kane)! The Penguin is known for his short stature, love of birds, and an array of deadly umbrellas! Five years after he first appeared, the Penguin’s real name was revealed to be Oswald Chesterfield Cobblepot in a 1946 newspaper strip. 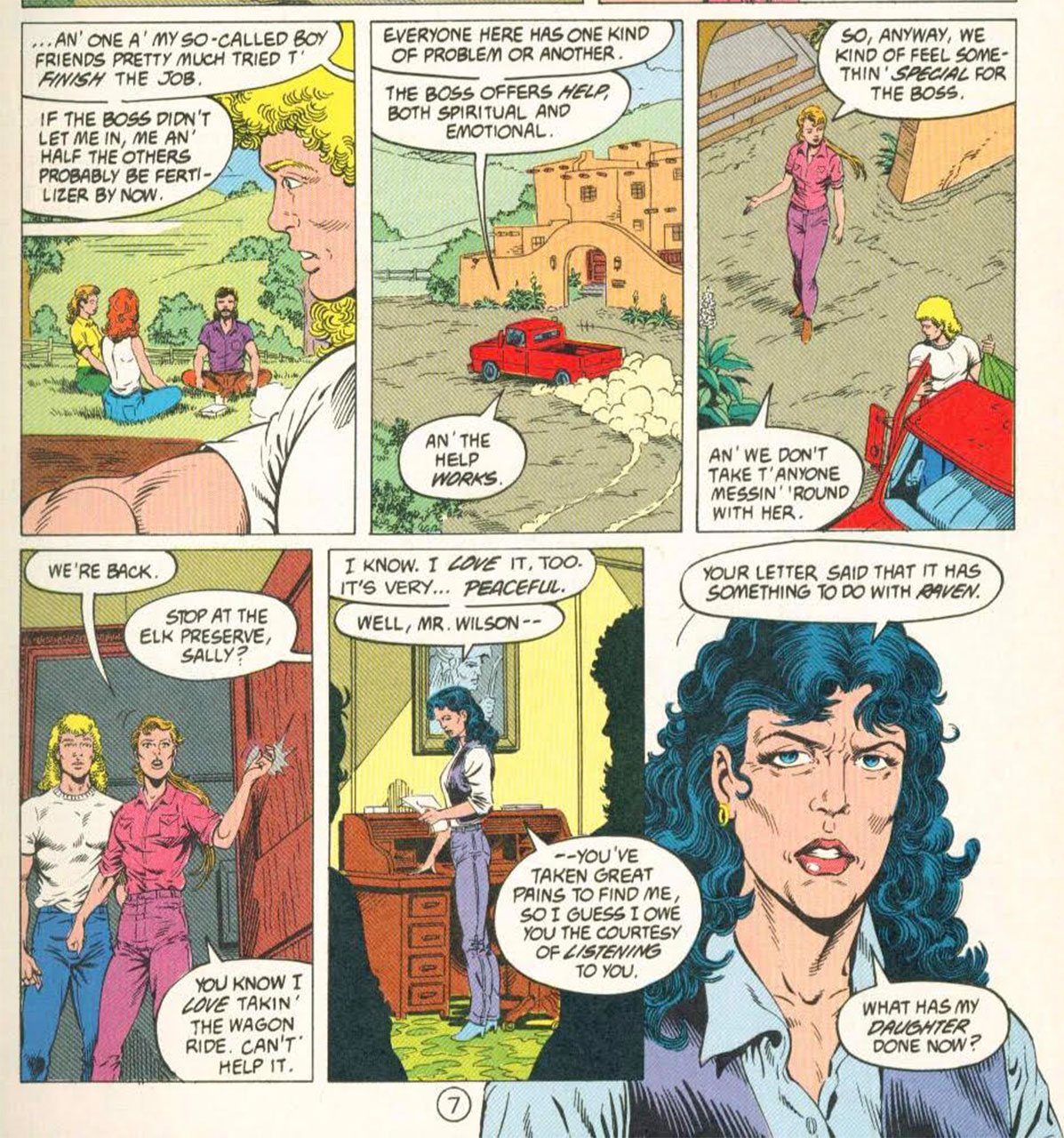 While enjoying breakfast with the Titans, Angela offers the group a place to stay at her secluded home in Killdeer, Ohio. This should come as no surprise, as Angela’s comic-book counterpart had a similar set-up in Jackson Hole, Wyoming. Although the geographical locations were different, both places were secluded residences that Angela/Arella offered to those who needed to regroup and reflect. Readers first visited the haven in New Titans #67 (written by Marv Wolfman and George Perez with pencils by Tom Grummett).

“You wanna make out with her don’t you?” 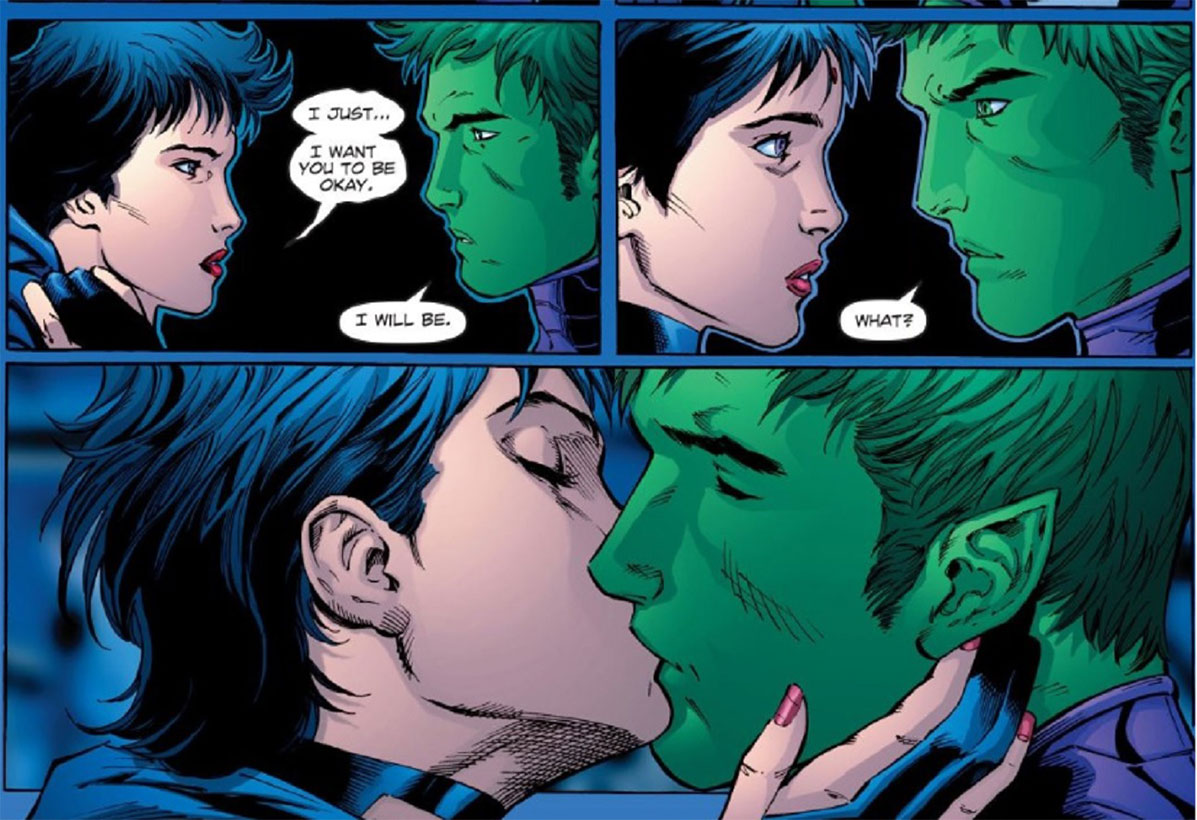 During their train ride to Angela’s home, Kory teases Gar about wanting to make out with Rachel. Gar did get a kiss from Raven in New Titans #114 (written by Marv Wolfman and penciled by Rick Mays), but it wasn’t under the most ideal circumstances. At the time Raven had been corrupted by her father’s remnants and was kissing other people to transfer Trigon’s seeds into them.

Their next kiss in Teen Titans (volume 3) #30 (written by Geoff Johns and penciled by Tony Salvador Daniel) was a lot more tender. During a tense moment the two teammates' compassion for one another turned into passion, resulting in an embrace. The two began an on-again, off-again relationship, and although they’re apart in current comics, it’s only a matter of time before sparks fly again.

What were your favorite Easter Eggs this week? Did you catch any that we missed? Let us know in our Community!