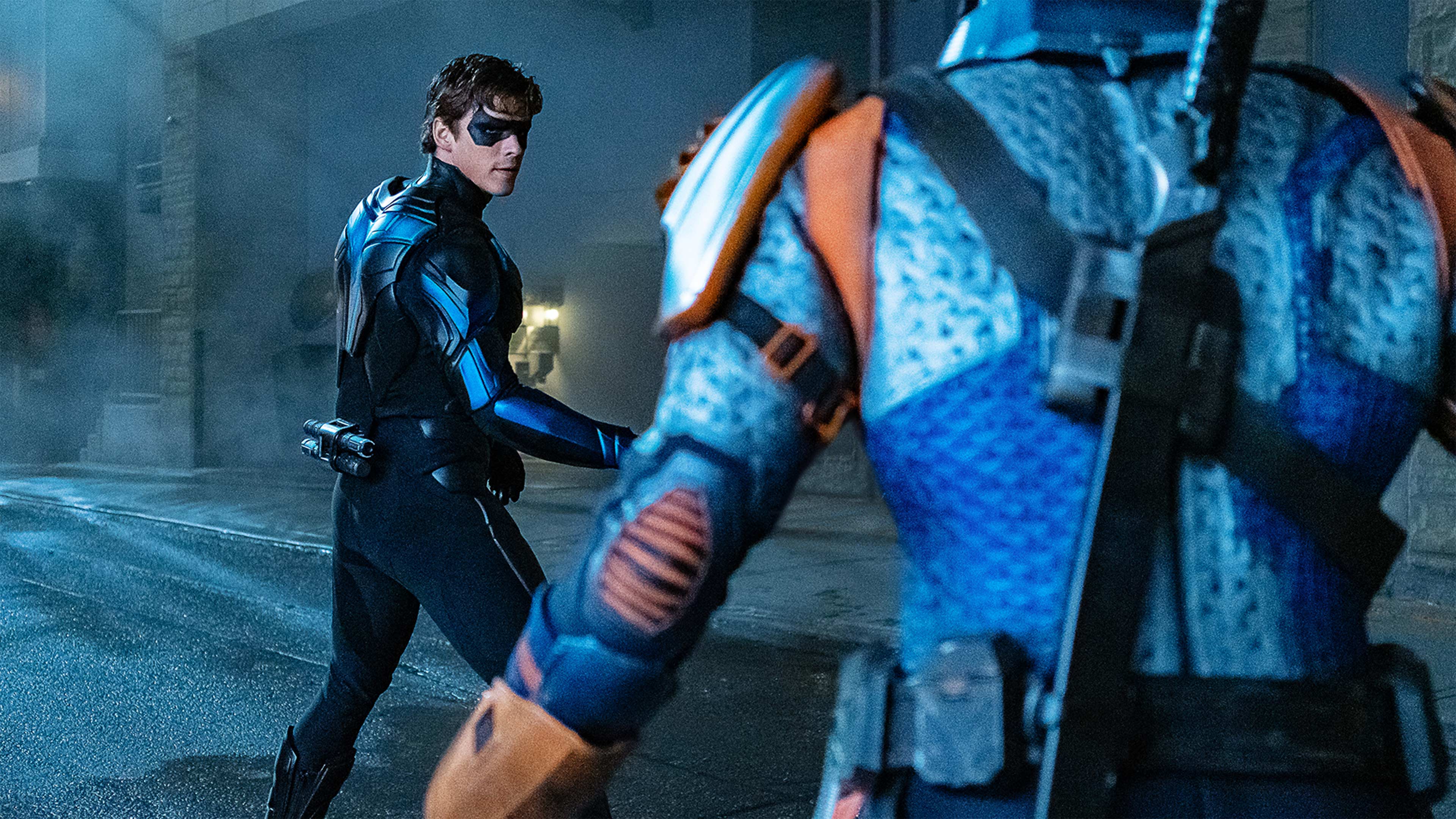 All the Easter Eggs in TITANS Episode 2-13: “Nightwing”

The second season of DC Universe’s Titans has come to a close, and there is so much to digest. Dick Grayson became Nightwing, Slade was defeated, Jericho’s essence is inside his sister, and Donna Troy died saving innocent civilians. This epic season finale brought many comic book concepts to life in amazing ways, so let’s take a look at all the Easter eggs and references in the Titans season finale “Nightwing.” 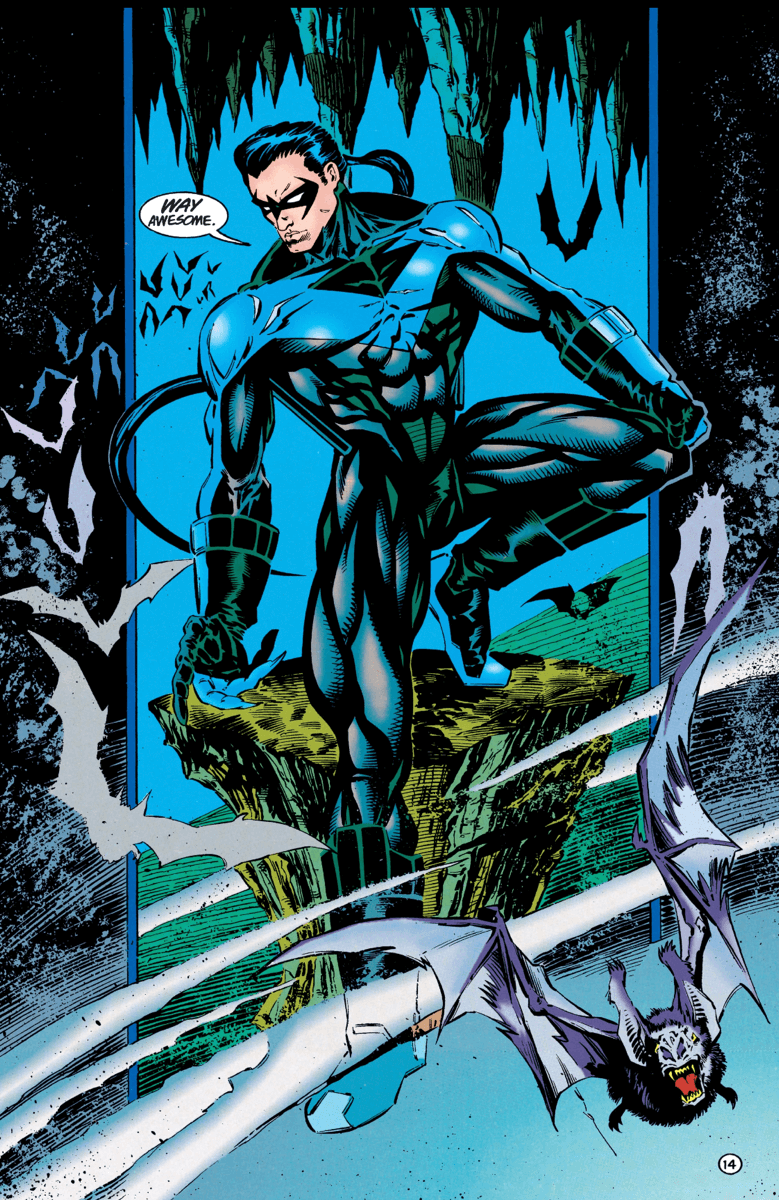 We’ve waited a long time to say this – Nightwing has finally arrived! Dick Grayson’s new identity made a memorable entrance, and kicked all sorts of butt. Dick Grayson’s iconic identity was first introduced in Tales of the Teen Titans #44 (story and art by Marv Wolfman and George Perez) in the “Judas Contract” storyline. His original costume wasn’t quite what we saw in this episode, with its high collar and disco-inspired look. For a deeper look at the history of Nightwing’s fashion career check out this article. The uniform Dick wore in this episode is closer to the costume given to him by Batman’s assistant Harold in 1995’s Nightwing #2 (written by Denny O’Neil and penciled by Greg Land). Dick’s first reaction was “Way awesome,” and it seems like fandom agreed. 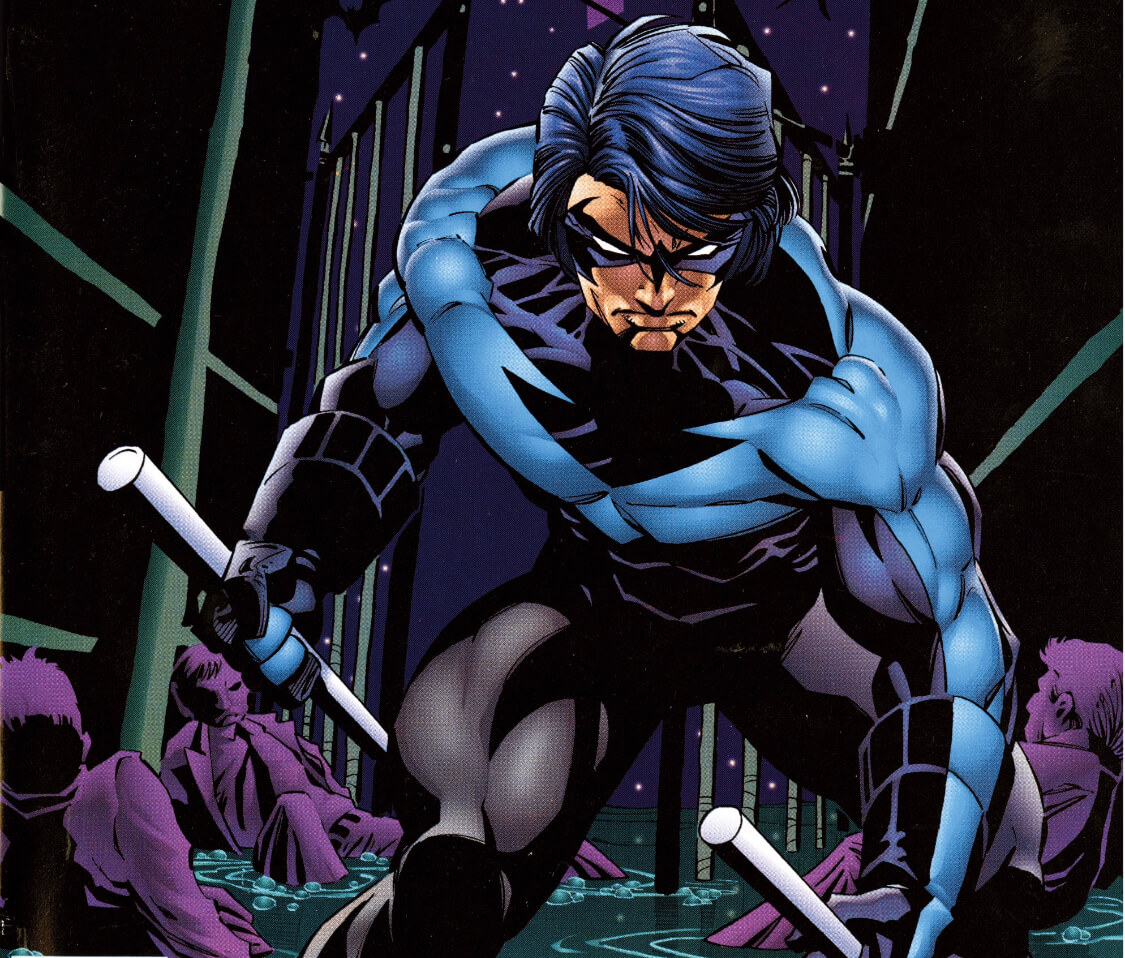 During his battle with Deathstroke, Dick deflected the assassin's blows with his trusty Escrima sticks. In the comics, the sticks are an iconic part of Nightwing’s arsenal, and he’s seen holding them in many covers, pin-ups, and posters. But despite their long status as his signature weapon, he wasn’t pictured with them until the cover of 1996’s Nightwing #1 (written by Chuck Dixon and penciled by Scott McDaniel). The Escrima sticks became of staple of Chuck Dixon and Scott McDaniel’s legendary run, with Nightwing using them to enforce his own brand of justice on the streets of Bludhaven.

THE TITANS VS. BEAST BOY 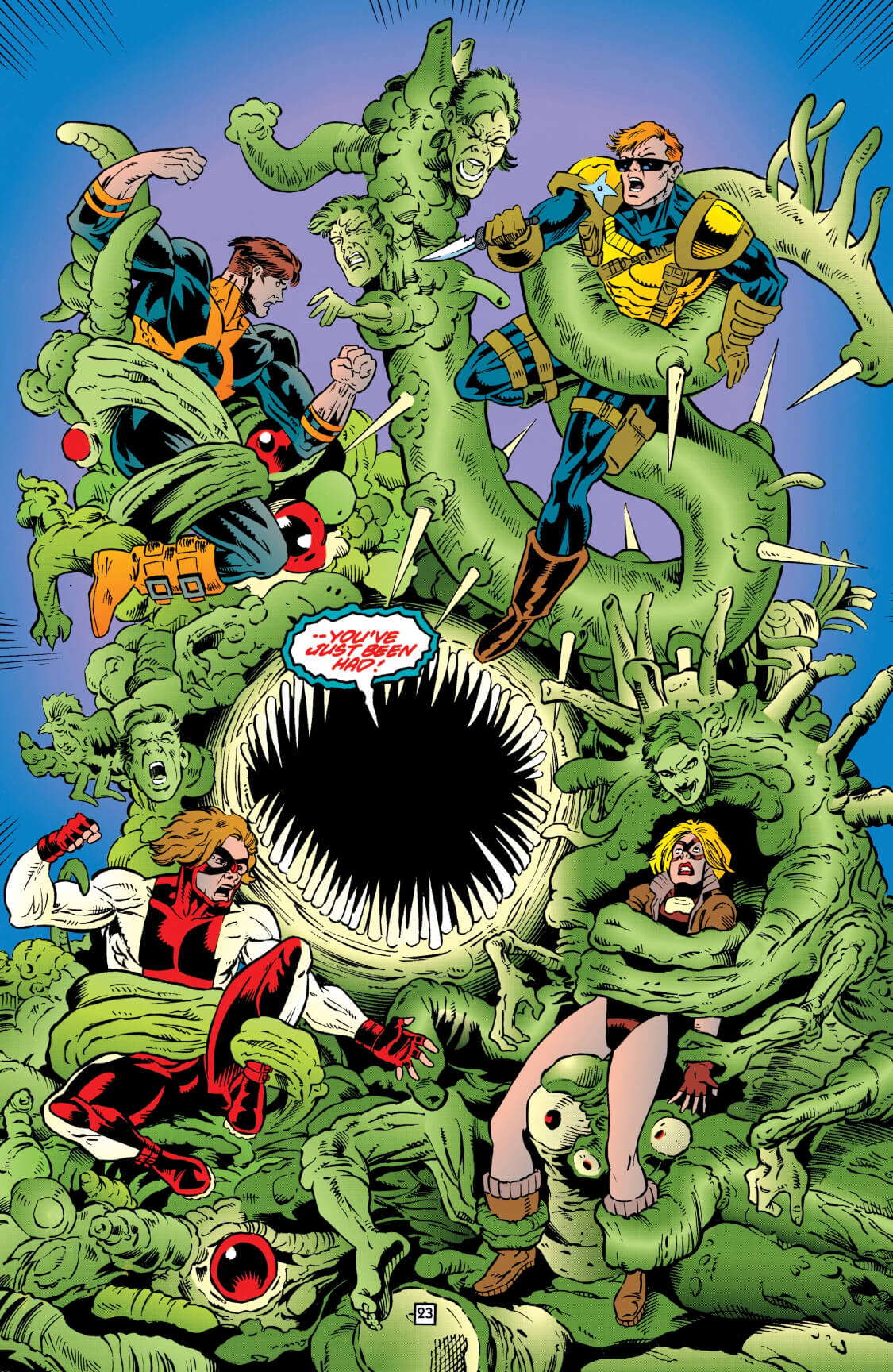 Deathstroke wasn’t the only foe the Titans faced this week. After a thorough brainwashing from Cadmus, Gar Logan attacked his Titan friends. There's a comic storyline where Gar Logan (known as Changeling at the time) battled his friends, but it was because of Raven, not Cadmus. At the time Raven had been corrupted by the lost souls of Azarath, and used her powers to turn Gar evil. As a result Changeling attacked the Titans in The New Titans #115 (written by Marv Wolfman and penciled by Stephen Jones), and if the image above is any clue it was horrific. The screen version of the Titans are lucky that Gar was just a tiger, because the creature in the above image would have haunted their nightmares for months.

THE TITANS VS. SUPERBOY 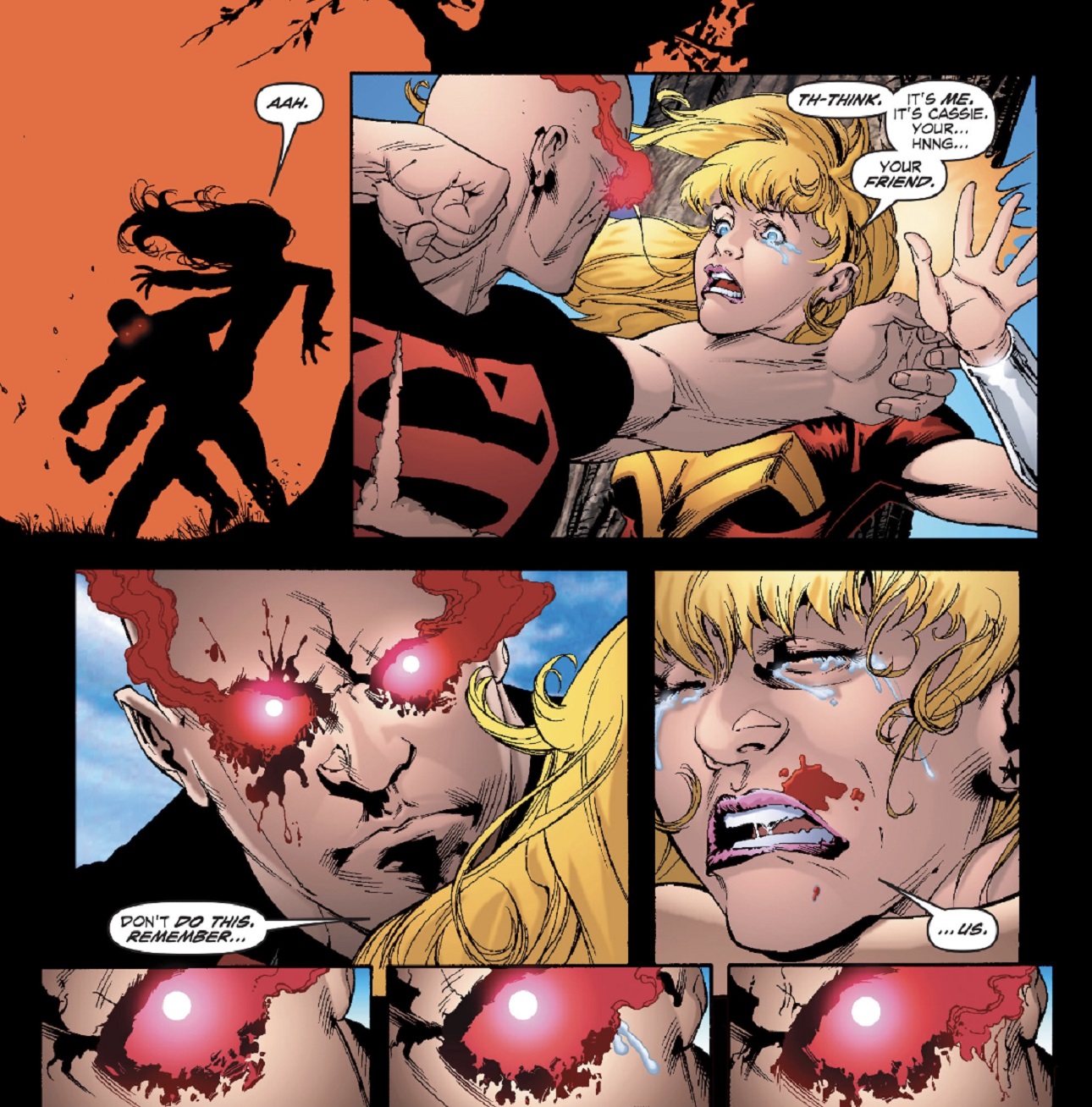 The Titans were also forced to face a brainwashed Superboy in the comics. Lex Luthor had implanted a few commands in Conner’s mind during the early stages of his cloning, and activated them in 2005’s Teen Titans #24 (written by Geoff Johns and penciled by Matthew Clark) causing Superboy to attack his friends. The Teen Titans held their own, and eventually Conner’s love for his teammates won out, but the psychological damage was hard to recover from. Superboy was horrified at what he had done, and it took him months before he was able to forgive himself and rejoin the team. 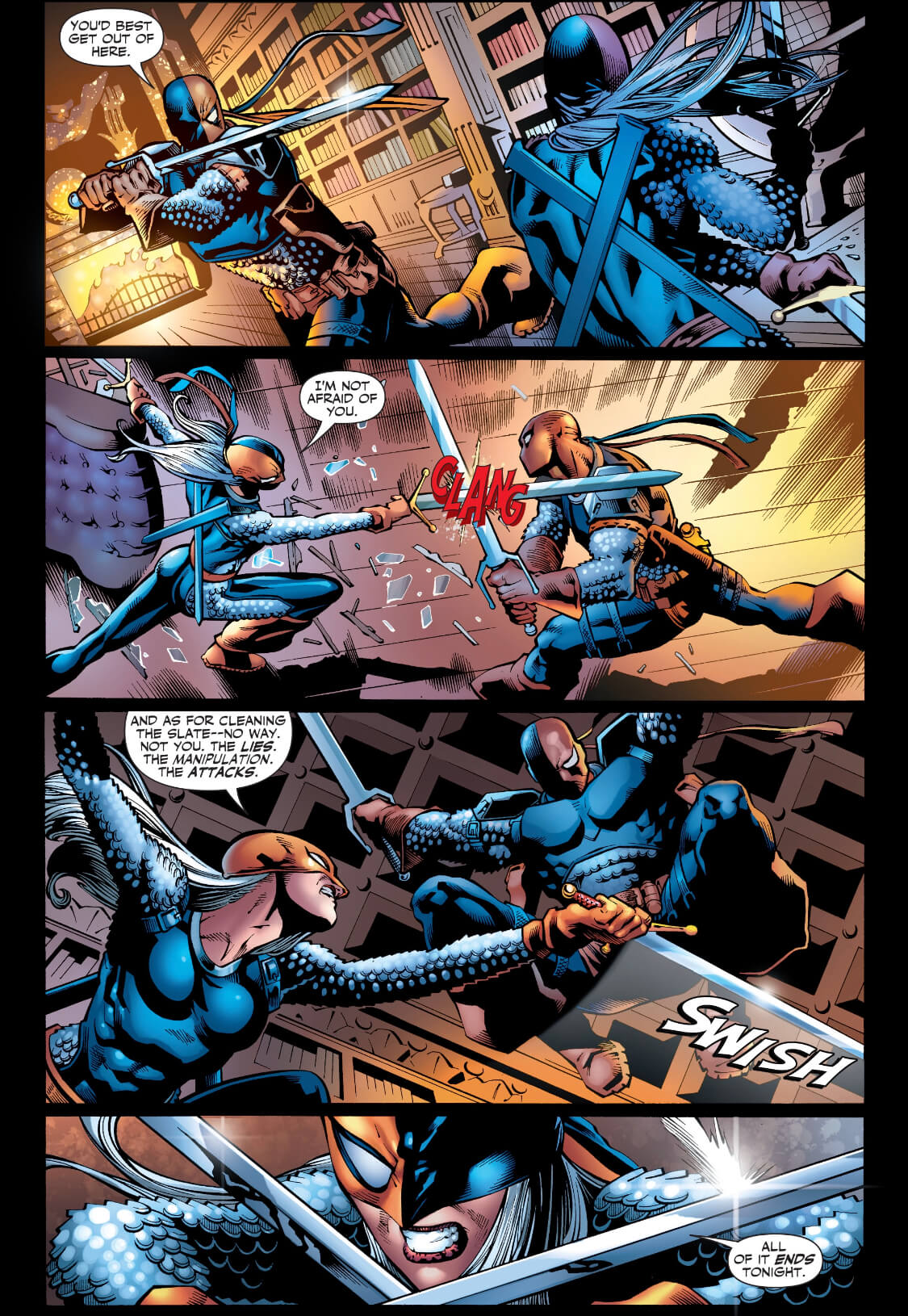 You’ve heard of breaking bad, but for Rose Wilson it’s more like breaking dad (sorry not sorry) -- since Rose literally stabbed her father in the heart. Rose was merely following in the footsteps of her comic book counterpart, who also had to make the tough decision to break from her father. Nightwing played a very big role in Rose’s emancipation, due to him frequently trying to tell her that Slade was just using her. He finally got through to her in Nightwing #117 (written by Devin Grayson and penciled by Brad Walker) and left her father’s side for good. If you’re looking for an epic Slade vs. Ravager fight, like the one from this episode, we highly suggest you check out Teen Titans #77 (written by J.T. Krul and penciled by Joe Bennett), which contains one of their most epic brawls. 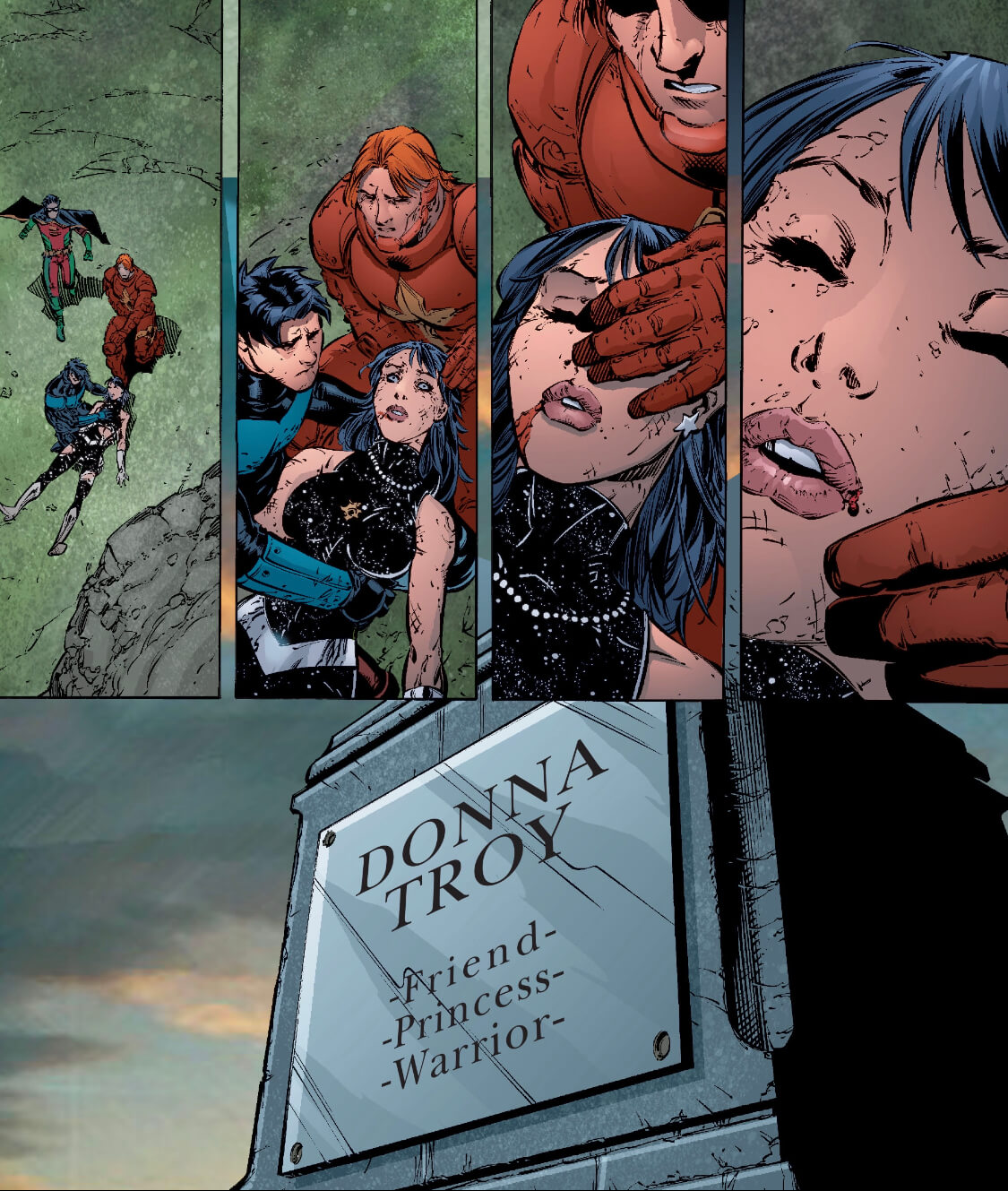 Poor Donna! Just when all the villains were defeated and we thought everyone was safe, Wonder Girl gave her life to save a group of innocent bystanders from a falling electrical tower. Alas, she was too good for this world... Donna’s comic book counterpart met her tragic end in Titans/Young Justice: Graduation Day #3 (written by Judd Winnick and penciled by Ale Garza) after a rogue Superman robot blasted her. The loss of Donna was too much for Dick, and in his grief he disbanded the Titans. It’s a good thing Bruce Wayne was around in this episode to talk Dick out of breaking the team up, otherwise we wouldn’t be getting a season 3. The comic version of Donna didn’t stay dead for long, and she later returned in the appropriately titled DC Special: The Return of Donna Troy limited series.

Interestingly, the idea of sending a dead member of the Titans to Themiscyra to heal (with Raven sent along to help) was used in 1981’s New Teen Titans #11 (story and art by Marv Wolfman and George Perez) after Deathstroke killed Gar Logan. The Amazons and Raven helped Gar get better. Can they do the same for Donna, or was this truly her final battle?

GET READY FOR SEASON 3 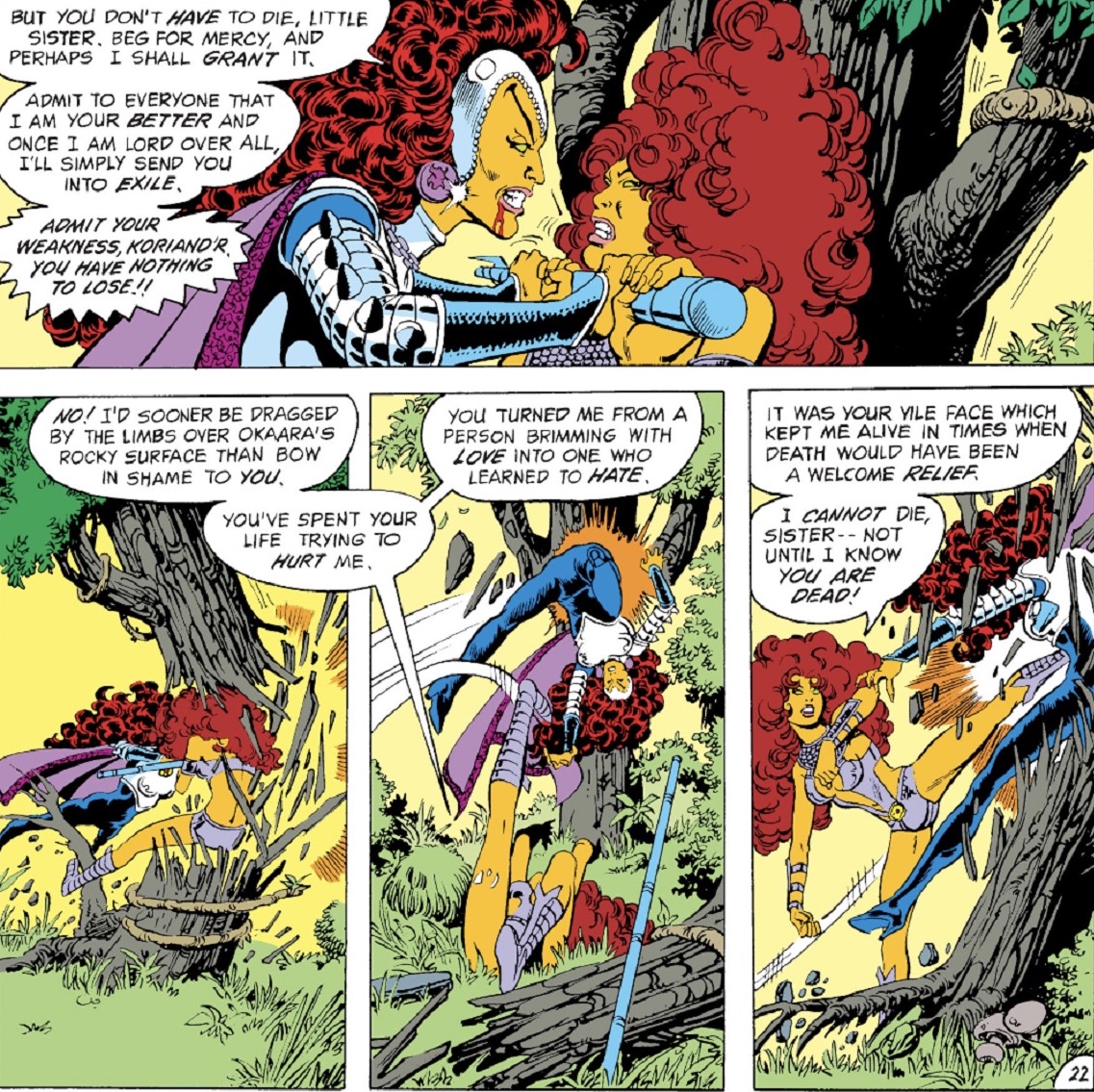 We don’t have a true Easter egg for this episode's cliffhanger, since the comic-book version of Blackfire never took over the body of a minivan mom at a grocery store, but we can recommend some comics. Blackfire has arrived on Earth, and she’s gunning for her sister Starfire. If you want to read some comics to prepare for their inevitable confrontation next season, check out 1982’s the New Teen Titans #23-25 and Annual 1. It’s the very first Blackfire vs. Starfire story, and it should help prepare you for some of the sister rivalry that could come in season 3.

That’s it for season 2 of DC Universe's Titans. Now it’s time to journey to Gotham for the next DC Universe Original, in which we follow Harley Quinn in her quest to join the Legion of Doom. Trust us, this is going to be an insane ride!