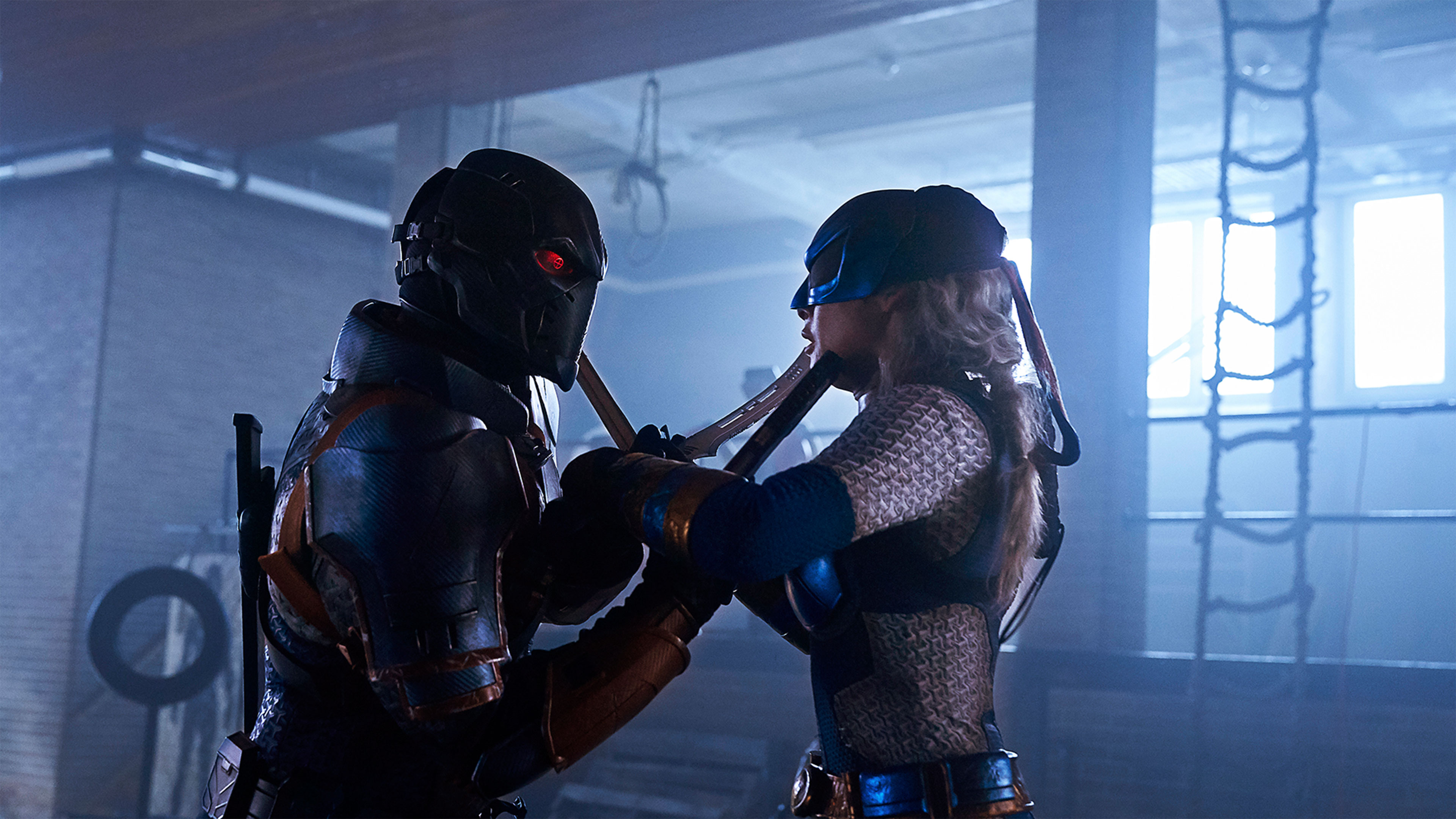 All the Easter Eggs in TITANS Episode 2-12: “Faux Hawk”

We’re rapidly approaching the season 2 finale for DC Universe’s Titans, and things haven’t slowed down. This week dealt with betrayal, secrets, carnage, and a hint of Nightwing. The series has continued to brilliantly bring the classic Teen Titans comics to life in live-action, with each episode containing cool references and homages. Let’s break down all the Easter eggs we found in the episode “Faux Hawk.” 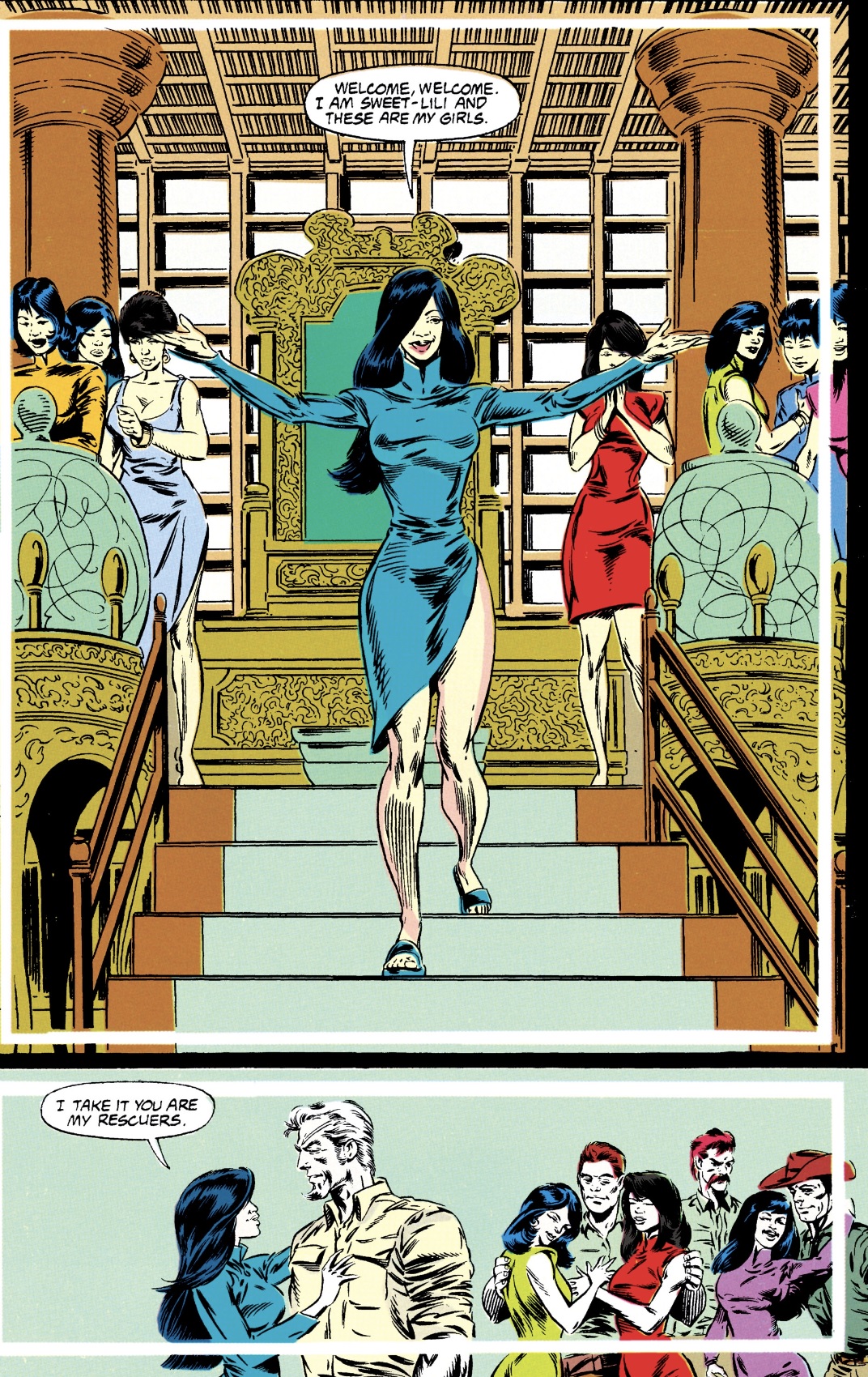 This week viewers met Rose Wilson’s mother, who was identified as Mei. Slade dismissed their dalliance as the result of the last call at a Radisson in Kansas City. How does this differ from Rose’s comic book mother? In the original comics Rose’s mother was named Lillian Worth, but she preferred to be called Sweet Lili. She met Slade in a flashback in 1992’s Deathstroke #15 (written by Marv Wolfman and penciled by Art Nichols) when he was tasked with rescuing her from captors in Thailand. Slade was injured during the mission and Lili nursed him back to health, and a love affair began. Rose was the result of one of their hookups, but Lili chose to keep that from Slade. Although the television version of Slade had a dismissive attitude towards Rose’s mother, in the comics he cared for her deeply, and was devastated when she was killed in 1995’s Deathstroke #45 (written by Marv Wolfman and penciled by Sergio Cariello). 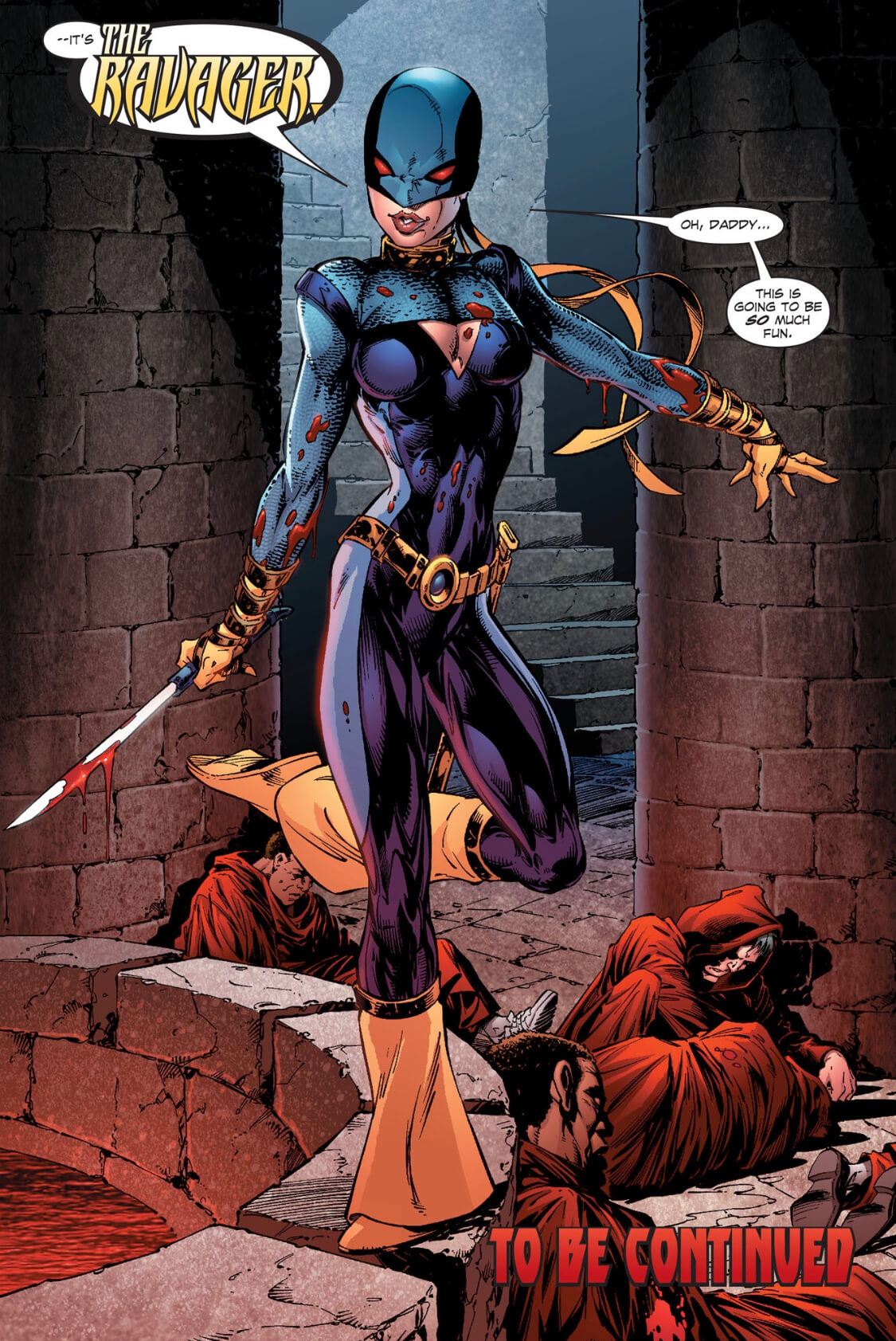 There has been a lot of anticipation for seeing Nightwing’s suit for the first time, but in all that talk people have forgotten that this episode introduced Rose’s Ravager uniform! The name and outfit first belonged to Rose’s half-brother Grant in 1980’s The New Teen Titans #2 (story and art by Marv Wolfman and George Perez). After Grant’s death a few other people took on the Ravager identity, until Rose finally donned the outfit in 2004’s Teen Titans #8 (written by Geoff Johns and penciled by Tom Grummett). As you can see by the image, the outfit she wore on the show is a pretty faithful translation of the source material.

This week’s episode also dealt with Slade slowly manipulating Rose over to the dark side, and hit a few of the same story beats from Teen Titans ½ #1 (written by Geoff Johns and penciled by Ivan Reis). What kind of a man gaslights his own daughter? At one point Slade tells Rose that she’s the only family he has left, a line almost identical to a piece of dialogue from Nightwing #112 (written by Devin Grayson and penciled by Phil Hester). It’s a good thing Rose has seen the light, it’s just a shame she had to lose an eye to do it. By the way, if you want to see the scene where she removes her own eye (as Slade suggested in this episode), then check out 2004’s Teen Titans #12 (written by Geoff Johns and penciled by Michael McKone). Ouch!

While interrogating Walter Hawn, Donna Troy revealed an unexpected feature of her lasso – mindwiping powers! We previously spoke about Wonder Woman and Wonder Girl’s lassos here, and while the famous rope is mostly known for compelling users to tell the truth, the mindwiping powers have roots in the Golden Age. In the early Wonder Woman stories the lasso served as a mind control device, and compelling people to tell the truth was only one of it’s many features. Diana first used the lasso to erase someone’s memory in 1942’s Sensation Comics #8 (written by William Moulton Marston and penciled by Harry G. Peter) when she wanted to show a department store owner what life was really like for her employees. Diana did all that without pretending to be a food app delivery driver, since those gigs were rare in the 1940’s. Still, it was pretty fun to see Donna and Dawn’s unorthodox method of delivering lunch. Sorry Walter! 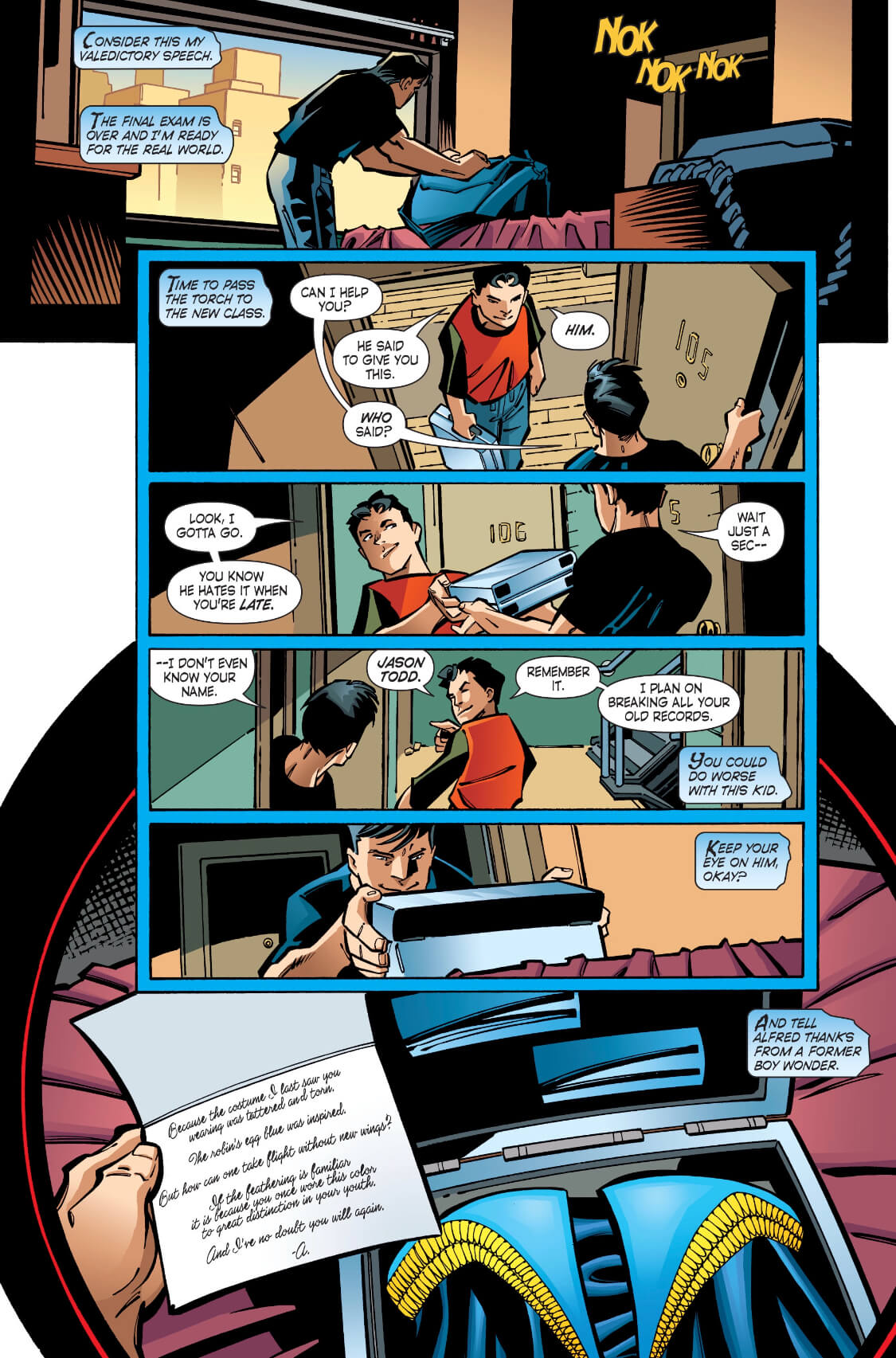 The MVP of the episode was a tailor named Stu, or perhaps we should call him “Salty Stu” after the massive shade he threw at Dick. Can you blame him? Dick totally let Stu’s masterpiece of a costume burn in the season 1 episode “Asylum.” How did Dick get his first Nightwing outfit in the comics? When he made his grand debut as Nightwing in Tales of the Teen Titans #44 (story and art by Marv Wolfman and George Perez) he pulled the costume out of a suitcase, and we finally learned the origin of the suitcase in the final chapter of “Nightwing: Year One.” Dick wore a prototype of the Nightwing costume throughout the story, until Jason Todd showed up at his doorstep in Nightwing #106 (story by Chuck Dixon and Scott Beatty, art by Billy Patton). Jason delivered the suitcase with a special message and gift from Alfred. Our good man Pennyworth made the costume for Dick, and did it all without setting fire to any fruitcakes. Although the comic never actually showed Alfred sewing it, so we can’t rule out Stu doing it and Pennyworth stealing the credit. 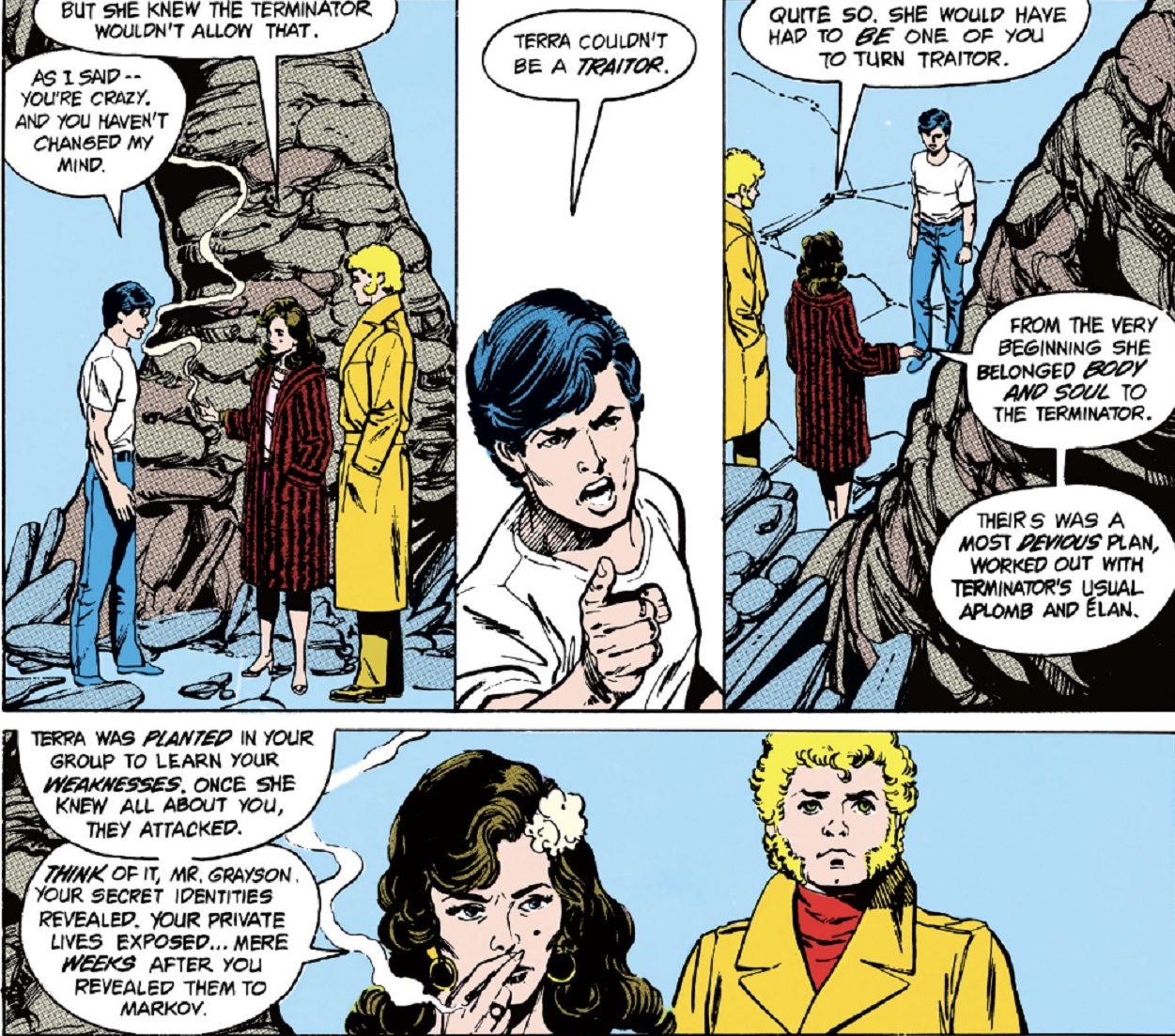 Now that Rose’s deception has been revealed, many fans are starting to point out the parallels between season 2 of Titans and the classic comic book storyline “The Judas Contract.” Here are a few examples…

* In this episode Adeline Wilson tells Dick that the Titans have a traitor in their midst. A similar scene occurs in the comics when Adeline reveals Terra’s true nature to Dick. In both cases Dick is shocked, despite being trained by the World’s Greatest Detective.

* Rose’s romance with Jason can be seen as a parallel to Terra manipulating Changeling’s feelings in the original storyline.

* Dick’s journey to becoming Nightwing is a huge part of “The Judas Contract” much like it has been this season.

Not everyone walked out of “The Judas Contract” alive, so let’s hope the team stays safe for the season finale “Nightwing” which streams this Friday, November 29th. Enjoy your Thanksgiving, and let’s hope the Titans don’t have a Black Friday!