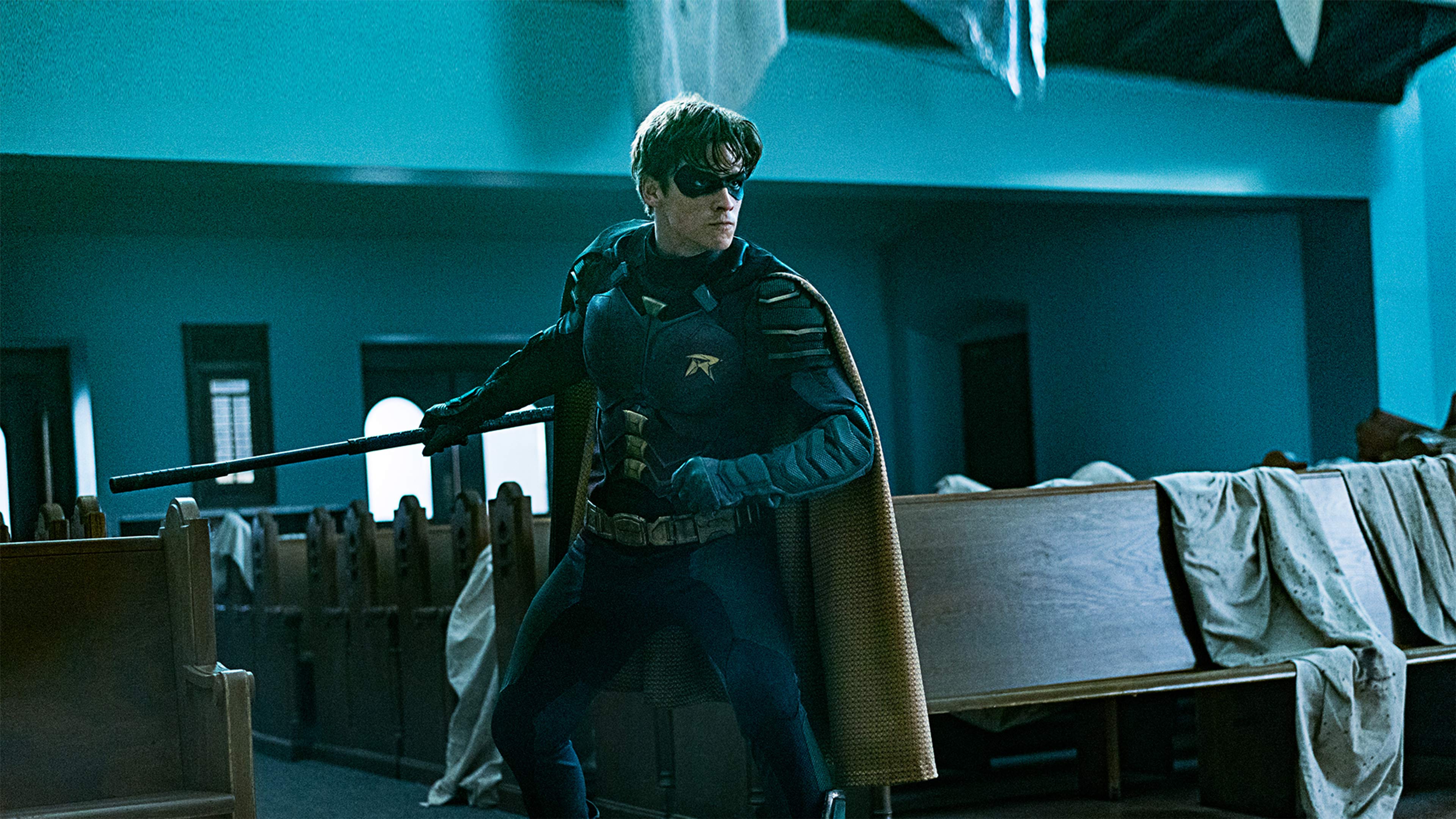 All the Easter Eggs in TITANS Episode 2-08: “Jericho”

Secrets were revealed and relationships were torn apart in the latest episode of DC Universe’s Titans. We finally learned why Deathstroke hates the Titans so much and what caused the original team to break up. And, as usual, we spotted some pretty cool references to the original comic book source material. We even had a few classic moments recreated on screen. So let’s break down all the comic book Easter eggs in the episode “Jericho.” 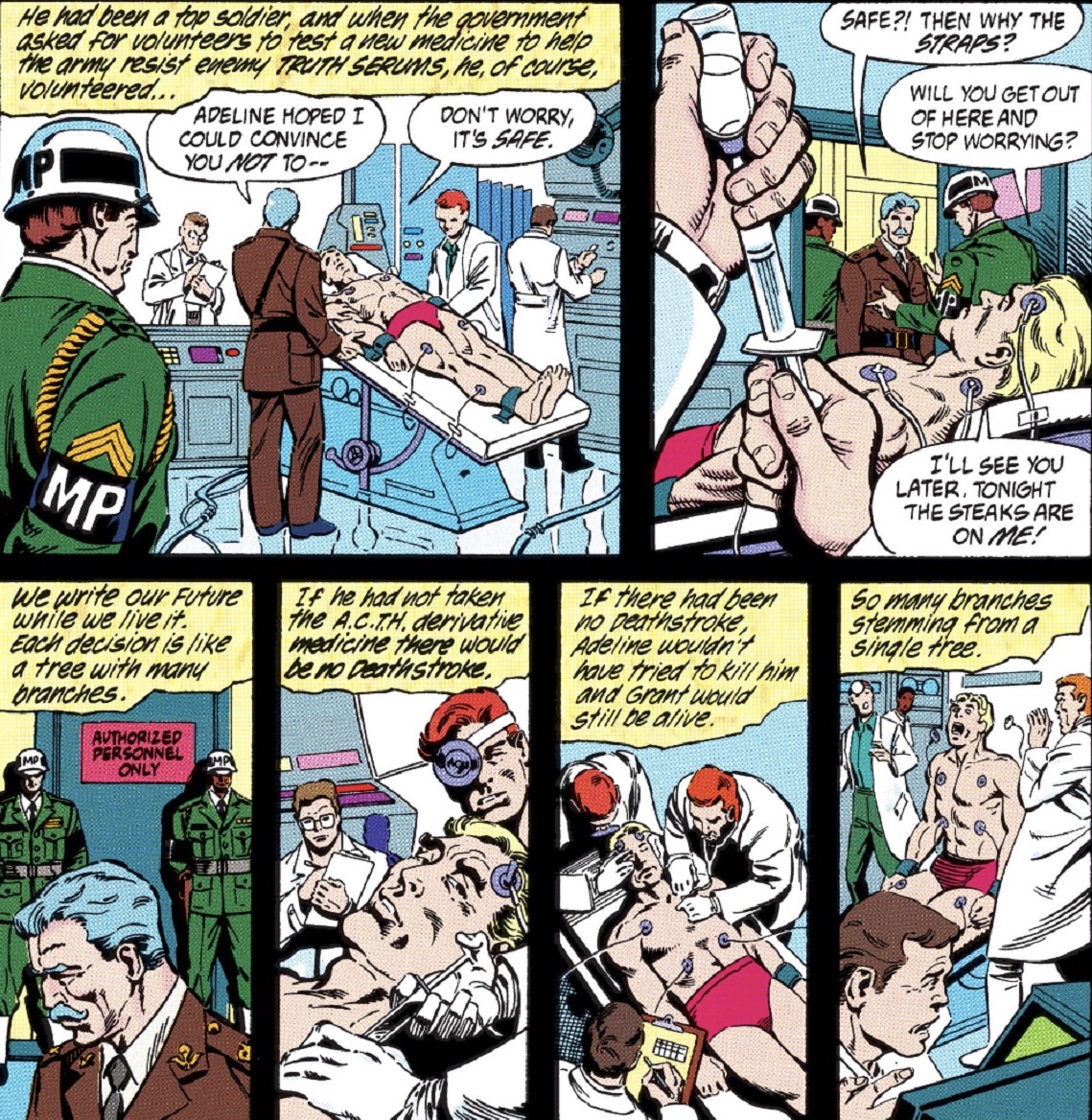 Have you ever wondered how to make your very own Deathstroke? It’s easy, all you need is an experienced combat soldier, a secret enhancement formula and you’re good to go! We’ve known about the experiments that caused Slade Wilson to become a super strong mercenary since 1980’s New Teen Titans #2 (story and art by Marv Wolfman and George Perez), but we didn’t see the procedure itself until 1991’s Deathstroke #1 (written by Marv Wolfman and penciled by Steve Erwin). We got to see a live-action version of the procedure during a flashback in this week's episode, and it was pretty faithful to the comics. 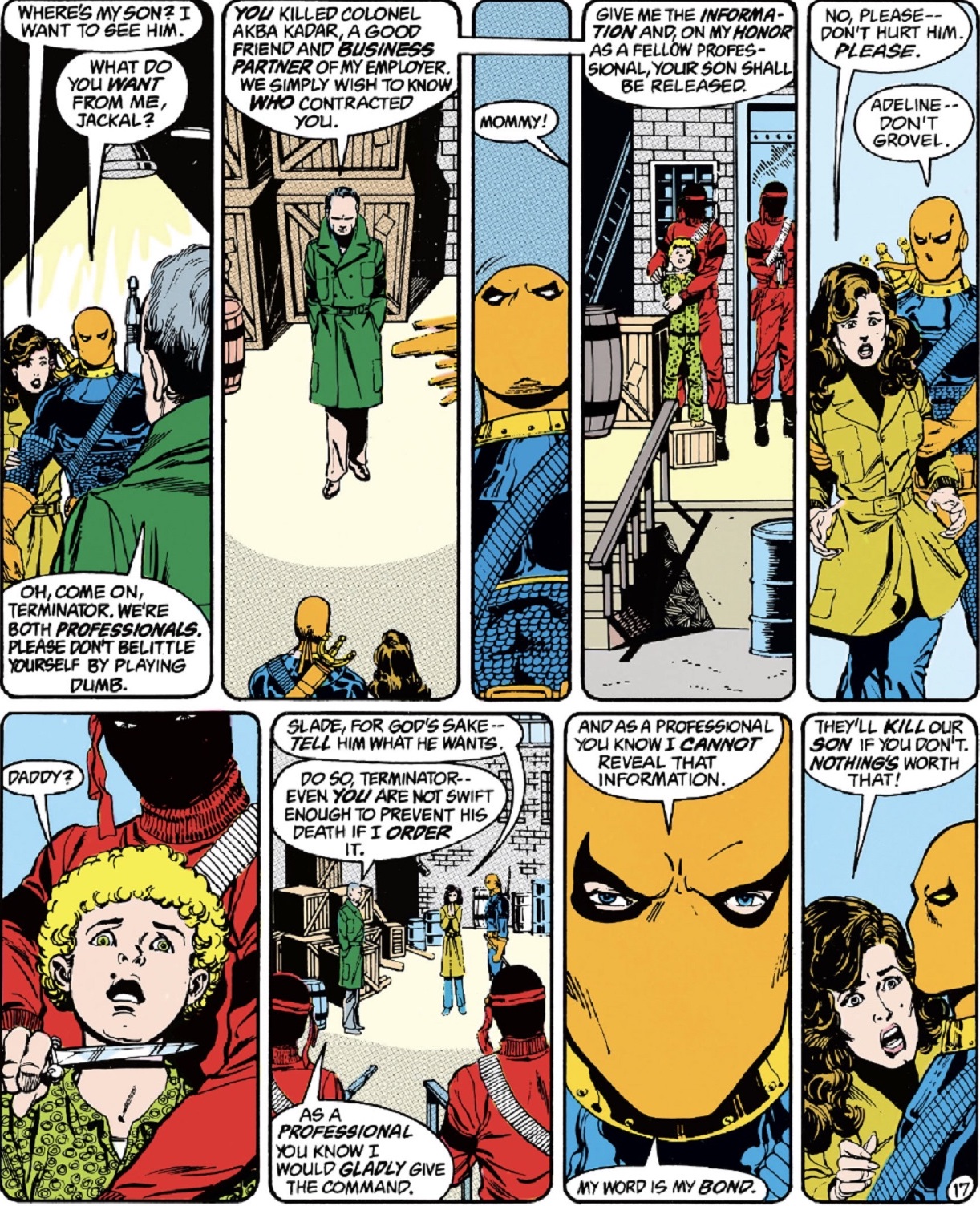 Unfortunately for Jericho, his backstory was also faithful to the comics. In Tales of the Teen Titans #44 (story and art by Marv Wolfman and George Perez), Adeline Kane tells Dick Grayson the story of how her son Jericho (birthname Joey in the comics) lost his voice. In both versions, Jericho is held at knifepoint by a terrorist who wants Slade to reveal the identity of one of his clients. Slade’s honor (and perhaps arrogance) prevent him from divulging the identity and he attempts to save his son with his special set of skills. Unfortunately for Jericho, the knife severed his vocal cords and he lost his voice. In the comics, the terrorist was known as the Jackal, and he had a few more run-ins with Deathstroke, sometimes under the alias of Ravager. 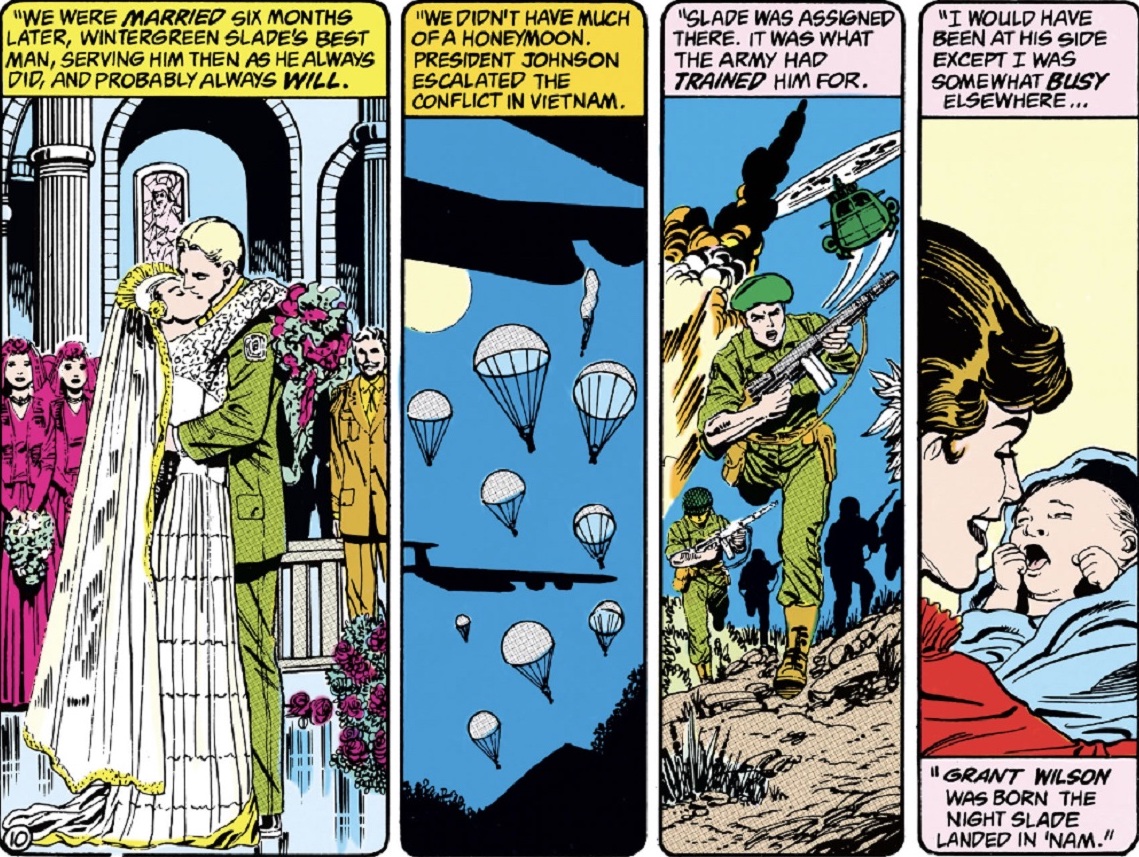 While looking through Wintergreen’s dossier, the Titans note that he served as best man at Slade Wilson’s wedding to Adeline. This bit of backstory trivia was taken from Tales of the Teen Titans #44. 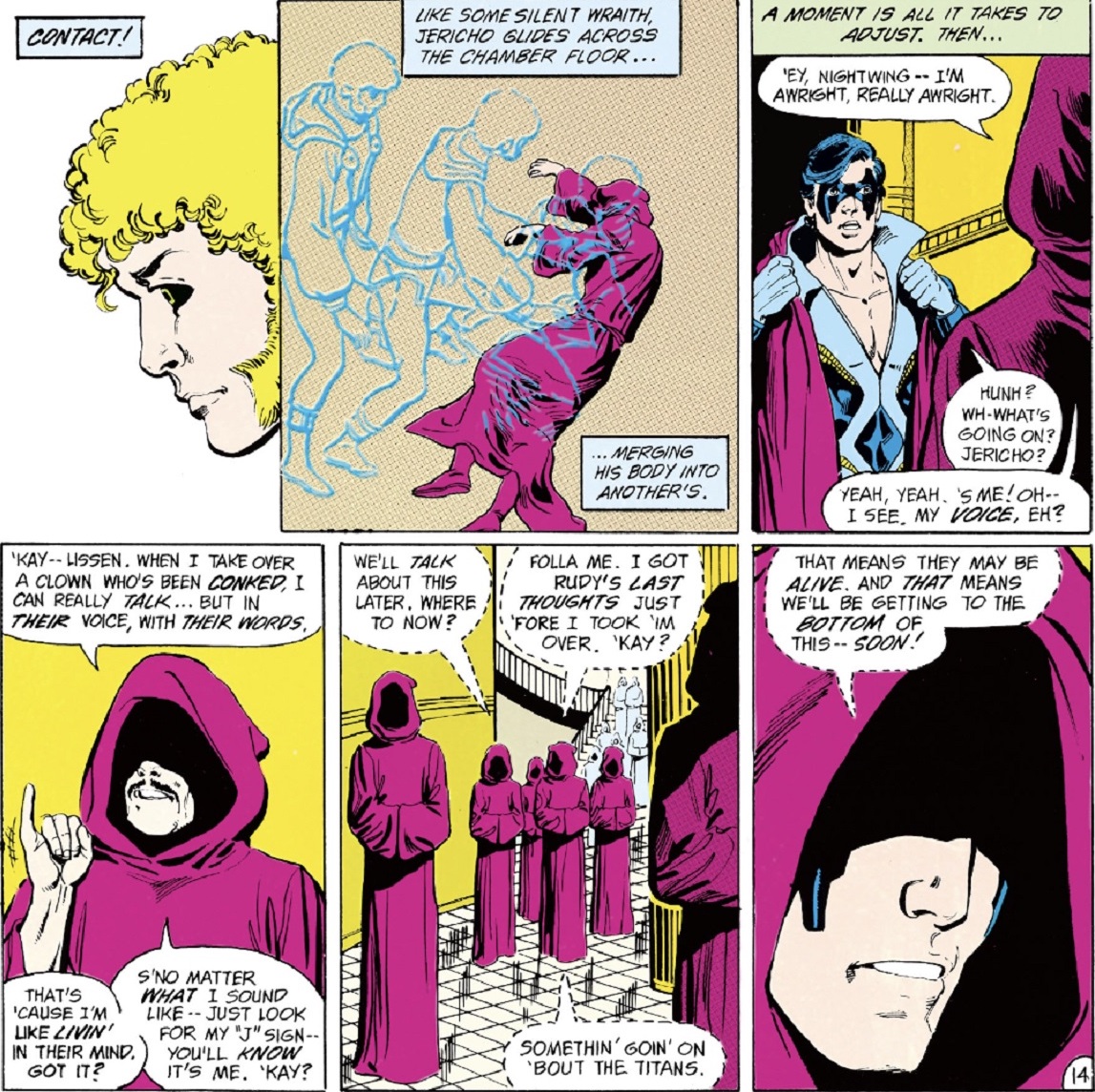 This week the Titans learned that Jericho had a few surprises of his own. Like his comic book counterpart, Jericho has the power to possess the body of anyone he makes eye contact with, an ability that was first revealed in Tales of the Teen Titans #44. The television show presents it a bit differently than the comics. For example, in the comics Jericho’s body disappears when he jumps into another person. If the person is conscious at the time of the jumping, they stay awake during the possession and are able to speak out and protest, while Jericho remains in physical control of them. If the person is unconscious, then Jericho can take control of their voice as well. Joey explained the distinction to Nightwing to Tales of the Teen Titans Annual #3 (story and art by Marv Wolfman and George Perez). 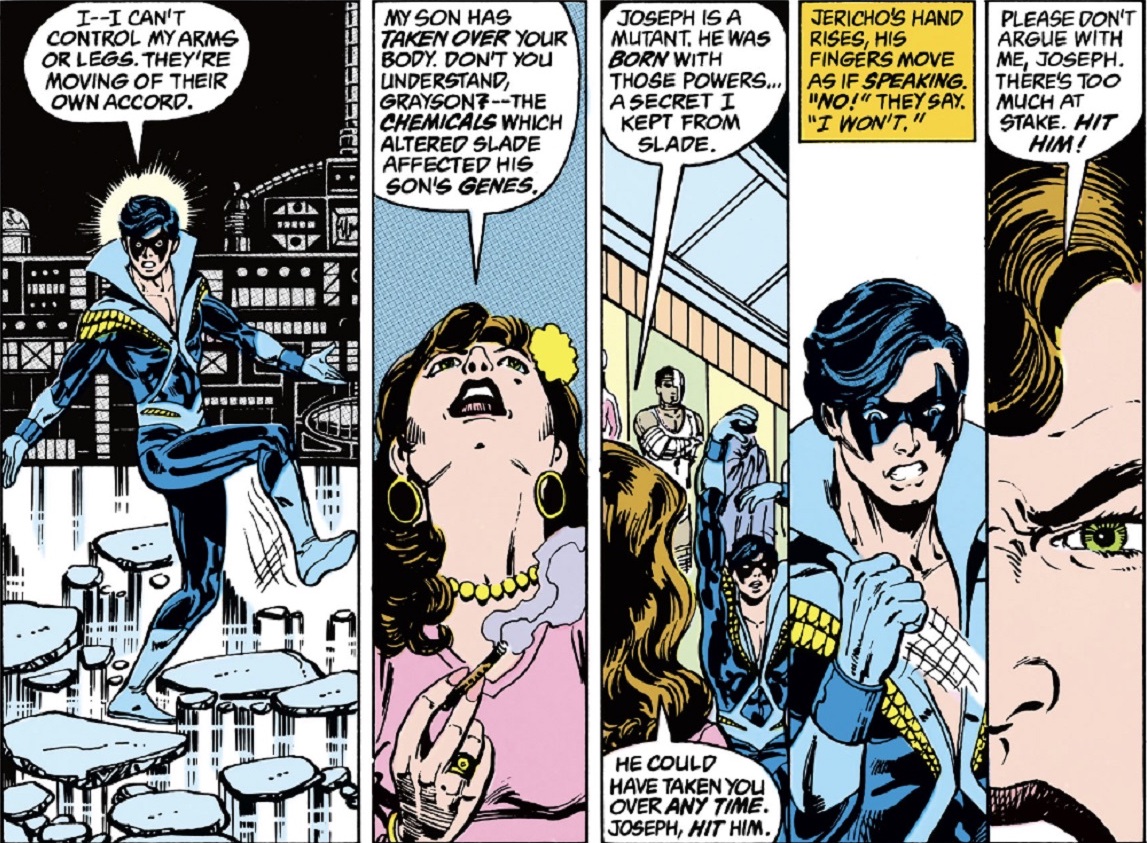 Last week we got the Batusi, and this week we got body swapping possession dances. This is shaping up to be the most dance-centric season of Titans yet, and we’re here for all of it! When Jericho revealed his abilities in the comics, he did so by making Nightwing dance. Strangely enough, this was mere panels after Nightwing’s epic introduction in Tales of the Teen Titans #44, so Dick was quickly brought down a peg. The screen version of Jericho showcased his powers the same way, by making a member of the Titans dance against their will. Did you see all those sweet moves Hank busted? Jericho is a man of many talents! 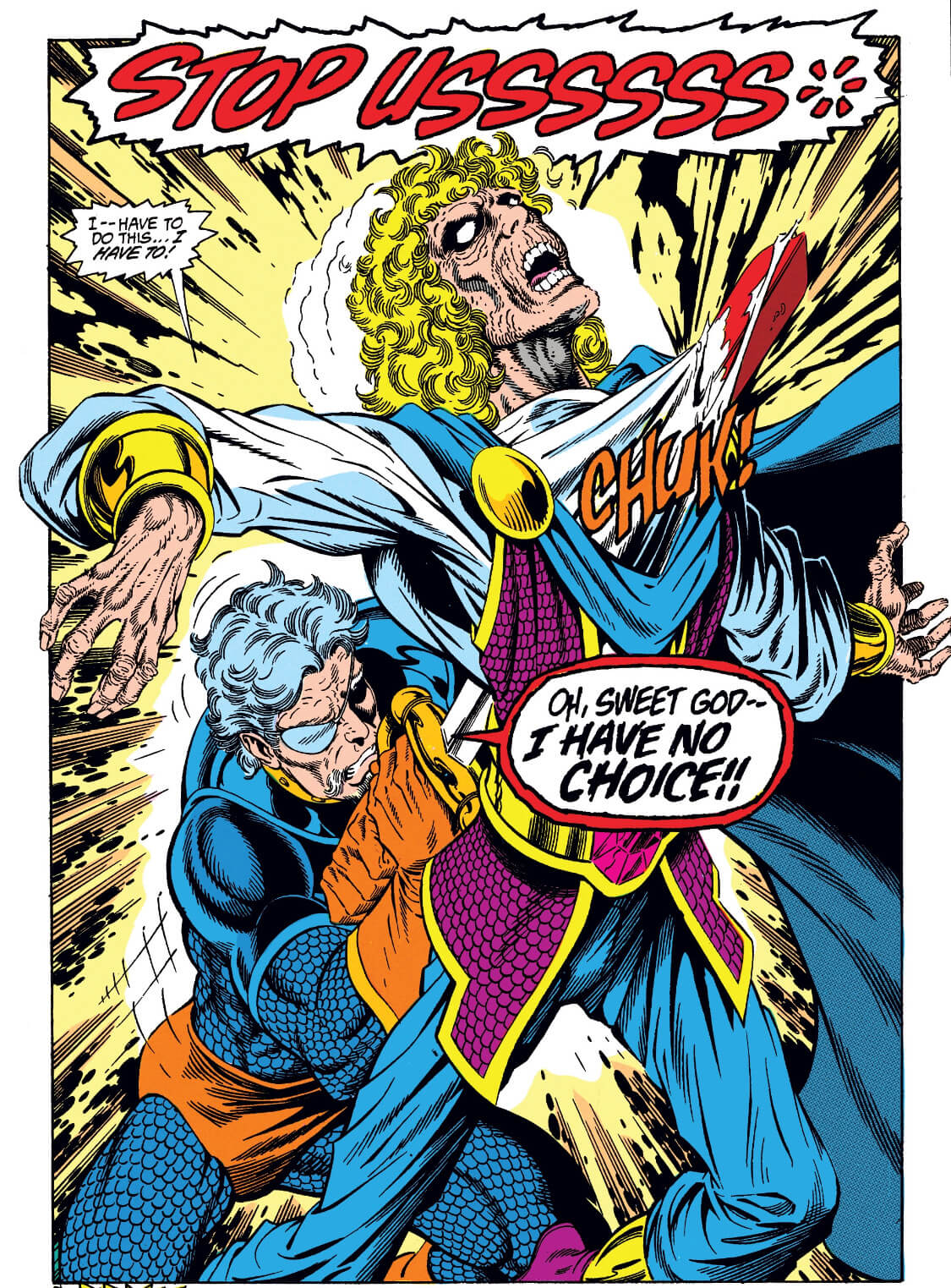 Noooooo! JERICHO!! Why did you try to block your father’s sword, Jericho?! We previously spoke about this moment in another Easter egg article, but it’s worth mentioning again here since this episode presented its own version. The comics' Jericho was also slain by his father after being stabbed in the back by Slade’s sword in The New Titans #83 (written by Marv Wolfman and penciled by Tom Grummett). In the comics the circumstances were a bit different, with Slade slaying him by his own request since his body had been taken over by the corrupted souls of Azarath.

Years later it was revealed that Jericho survived by jumping into his father’s body. Could the same have happened here? There have been some interesting theories on social media as to how Jericho could have survived. Either way, he was an innocent pawn in the war between the Titans and Deathstroke, and his tragic end broke our hearts.