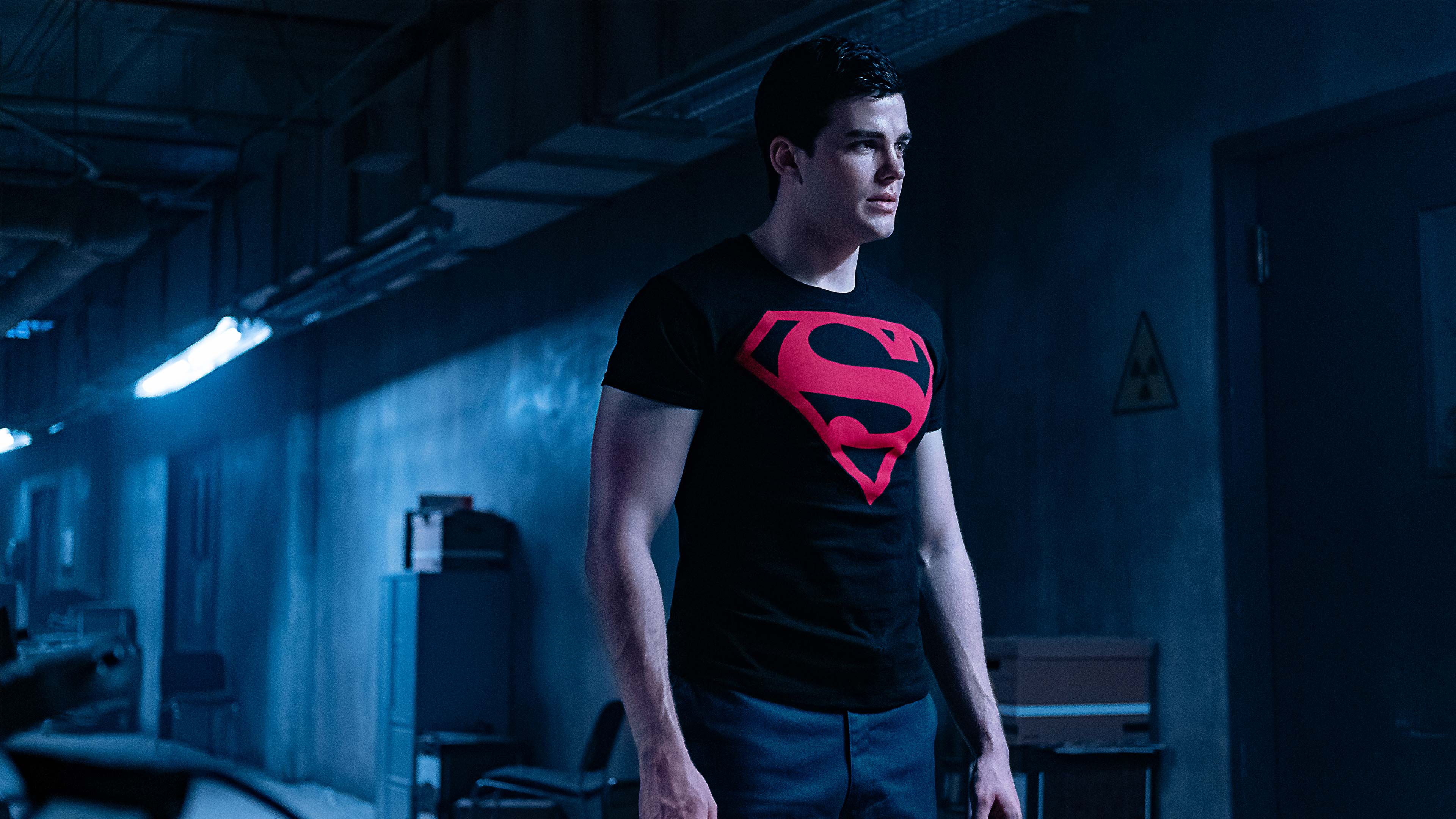 All the Easter Eggs in TITANS Episode 2-06: “Conner”

Clones! Super dogs! Daring rescues! This week’s episode of DC Universe’s Titans had it all! Ever since the epic season finale cliffhanger stinger introduced Superboy and Krypto last year, fans have been wondering when they’d get a chance to see the Teen of Steel and his dog again. Now they’re here, and it’s just like seeing the comics come to life! This episode mined MANY interesting pieces of Superman lore. So let’s break down the Easter eggs for the Titans episode “Conner”…

NOTE: For more on Krypto and Superboy, check out our Easter eggs column for the Titans episode “Dick Grayson.” 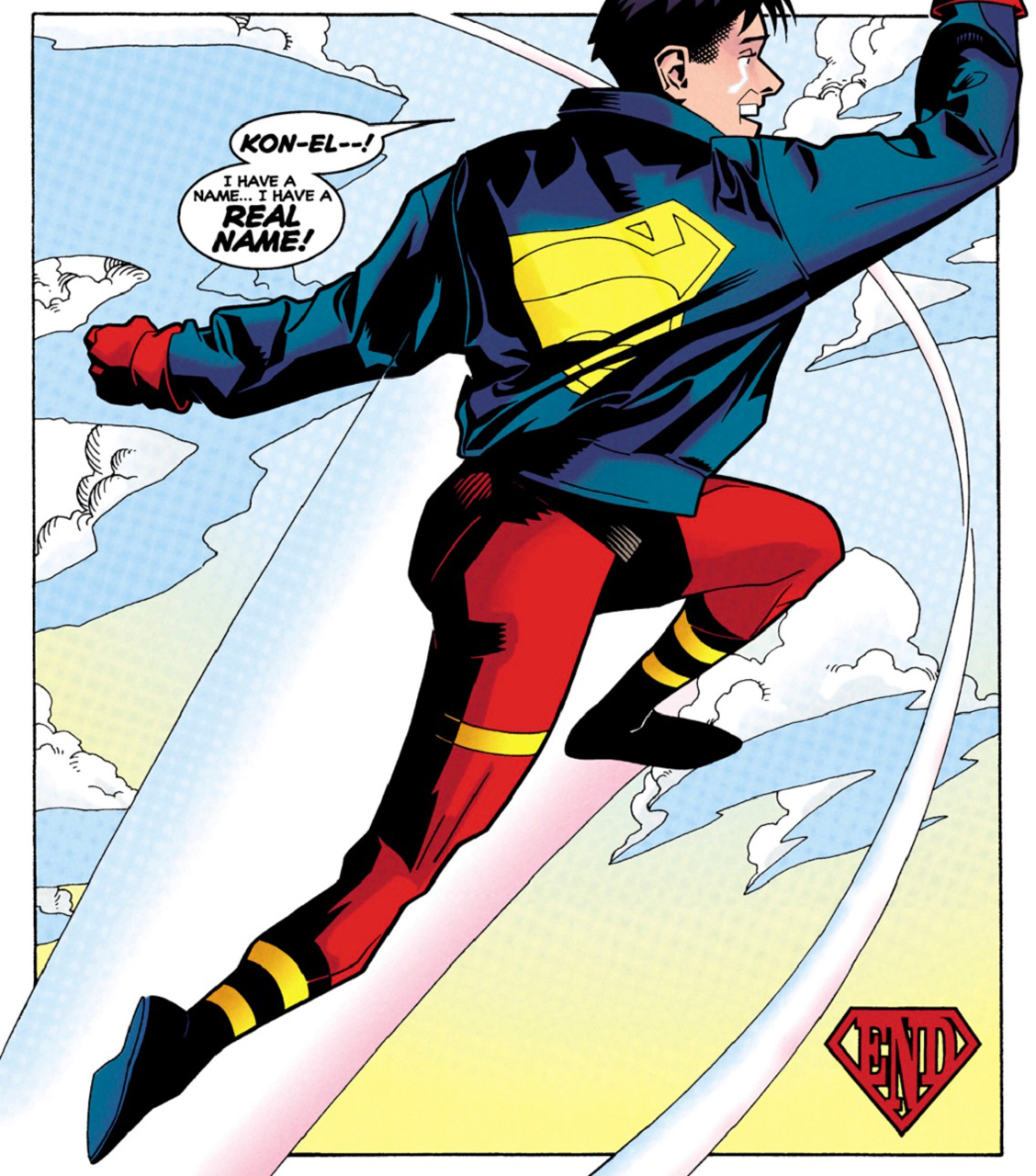 What’s in a name anyway? In this episode, Conner got his name after looking at the tag on a worker’s uniform. The story of how his comic counterpart first became “Conner” is a lot less simple. For years Superboy didn’t have any name other than Superboy, which got really inconvenient at times, but he didn’t have a secret identity so it wasn’t a concern. In 1998’s Superboy #59 (written by Karl Kessel and penciled by Dusty Abell) Superman gave Superboy the name Kon-El and officially adopted him as a cousin. The news filled Superboy with joy, since he never had his own name, and was constantly struggling with identity issues since he was a clone. His friends would call him “Kon” for short during this period. After Superboy was sent to live with Ma and Pa Kent in Smallville, the name Kon-El was simplified to Conner. The first comic where Superboy was officially identified as Conner was 2003’s Batgirl #41 (written by Dylan Horrocks and penciled by Adrian Sibar). 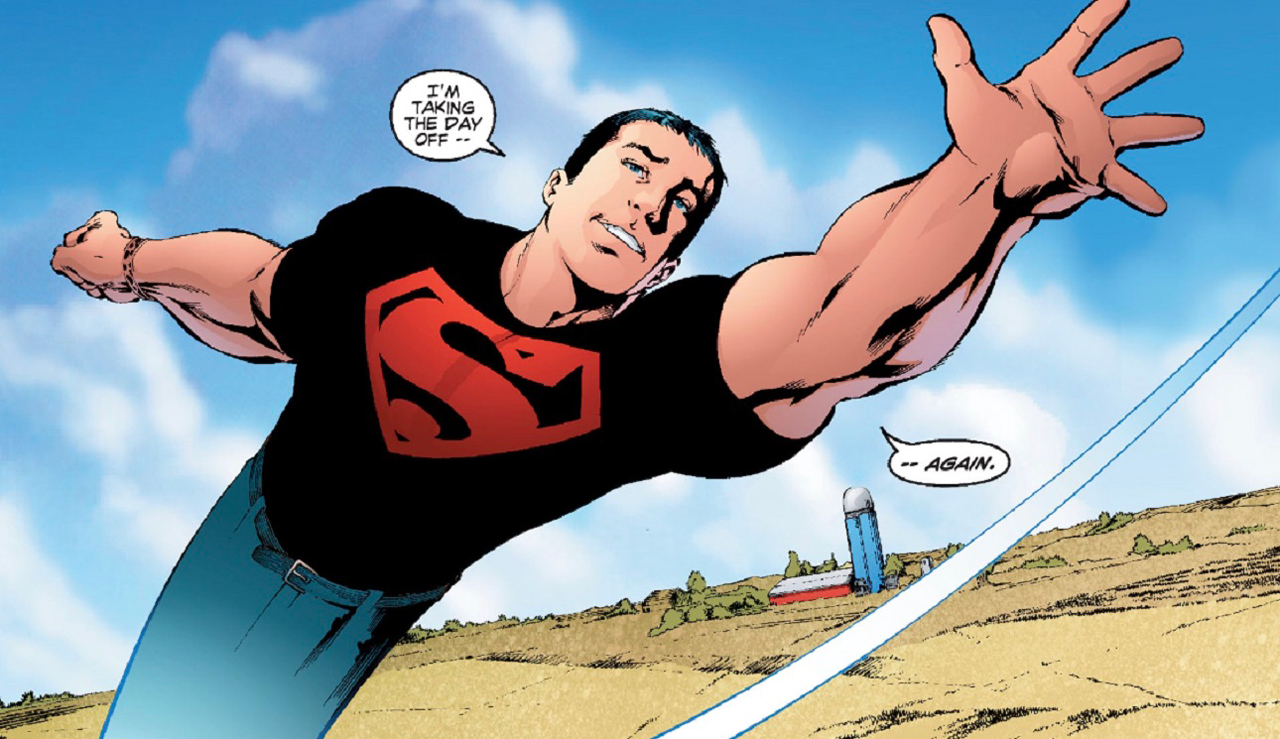 It’s more than a fashion statement, it’s a piece of comic lore! While walking around Metropolis, Conner’s eyes gravitate to a black Superman shirt with a Red “S” pasted on… When Conner simplified his superhero look in 2003’s Teen Titans #1 (written by Geoff Johns and penciled by Mike McKone), the red- and-black shirt became his signature superhero uniform for the next eight years. 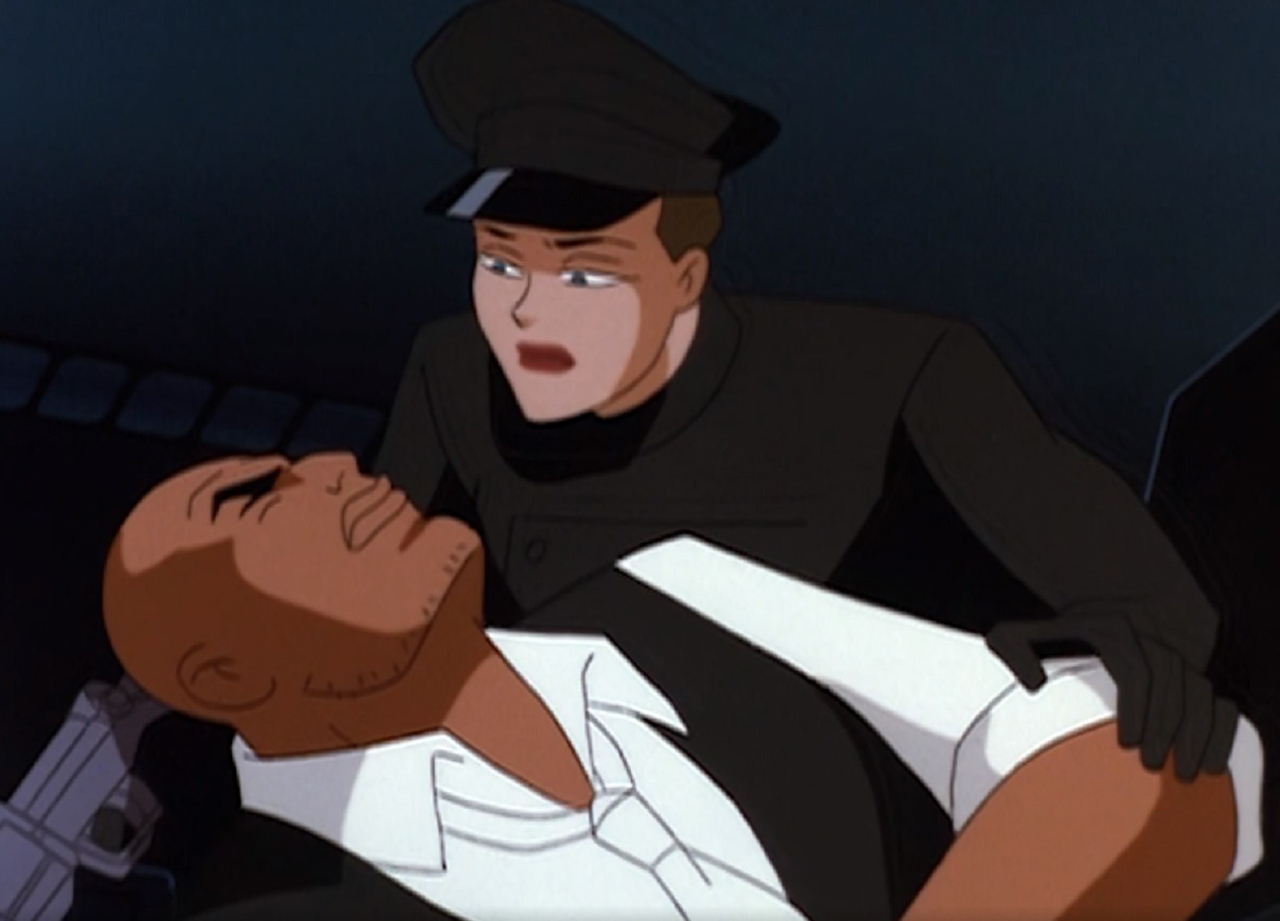 When there’s trouble with one of Luthor’s projects, don’t be surprised if you find Mercy Graves poking around demanding an explanation. She’s Lex’s valet, assistant, bodyguard, enforcer and all-around girl Friday. Imagine if Alfred was a cold-blooded young woman -- that’s Mercy in a nutshell. Ms. Graves first appeared in the 1996 Superman: The Animated Series episode “A Little Piece of Home” before joining mainstream DC Comics continuity a few years later in Detective Comics #735 (written by Greg Rucka and penciled by Dan Jurgens).

Were you surprised to see Conner and Krypto stopping traffic in Metropolis? If you paid attention to the Easter eggs in Doom Patrol, you may have seen it coming! While Cyborg was looking through news headlines in the episode “Donkey Patrol,” an article mentioned the chaos the boy and his dog were causing. Judging from the headline, it sounds like Conner didn’t get dressed until he was a few miles into his walkabout.

Why Did You Say That Name?! 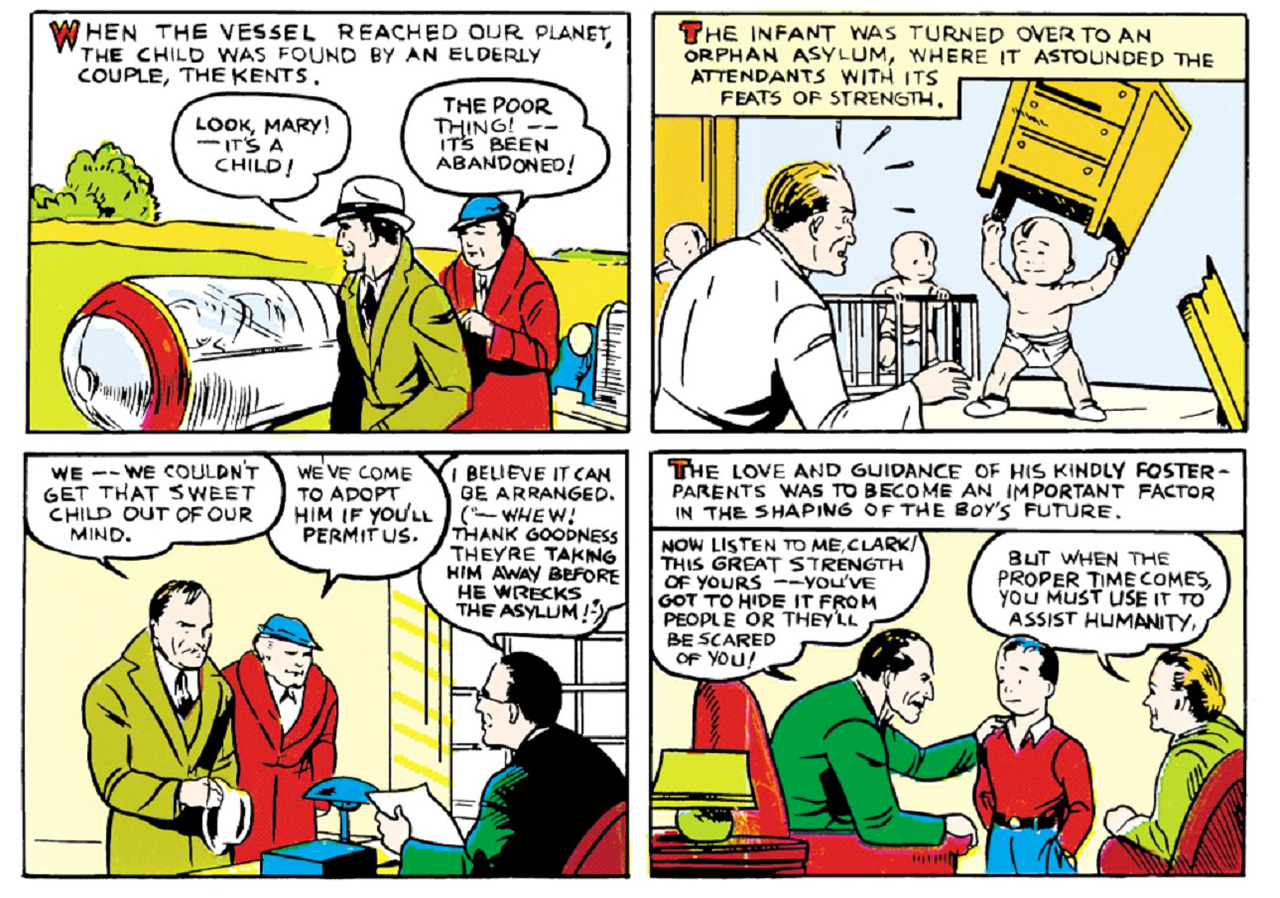 It’s not easy being a clone, especially when you have no real memories of your own. During this week’s episode, Conner remembered a childhood that wasn’t his, and saw visions of a mother he didn’t grow up with. The woman from Conner’s vision is Martha (or “Ma”) Kent, the kindly soul who raised Superman. For the past few years, there have been some jokes centered around Martha’s name, but that hasn’t always been her moniker. When she first appeared in 1939’s Superman #1 (written by Jerry Siegel and penciled by Joe Shuster) her name was Mary. The 1942 novel The Adventures of Superman (written by George Lowther) names her Sarah, which carries over into the 1950s George Reeves Adventures of Superman television series. Ma Kent become “Marthe” in 1951’s Superboy #12 which eventually evolved into “Martha.” The next time you hear someone make a “Martha” joke, school them on the history behind it! 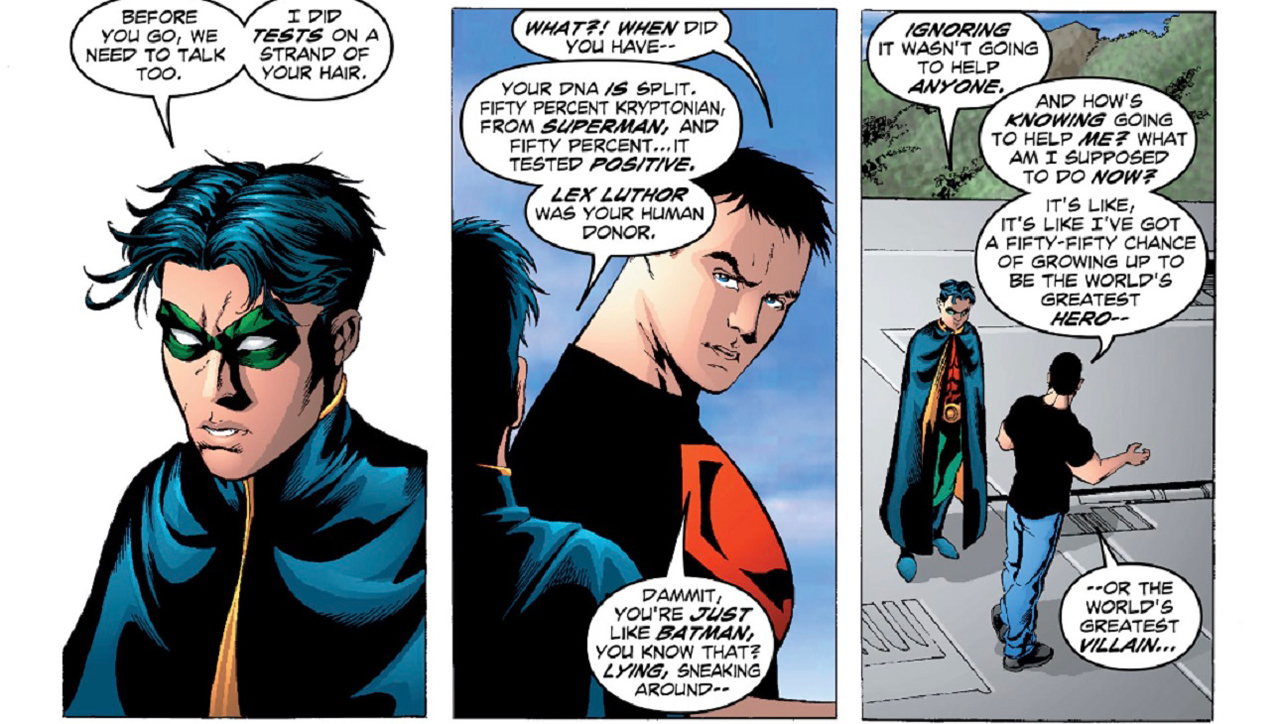 Speaking of long roads, it didn’t take long for the Titans version of Conner to discover he’s a clone of Lex Luthor and Superman. The journey to that revelation had a lot more detours in the comics. When Superboy first appeared in Adventures of Superman #500 (written by Karl Kessel and penciled by Tom Grummett) he thought he was a clone of Superman, until he learned the secret scientific group Cadmus didn’t have the power to clone Kryptonians in Adventures of Superman #506. The mystery of Superboy’s human donor was temporarily solved in 1995’s Superboy Annual #2, when the Teen of Steel was told that he was cloned from Paul Westfield, an evil Cadmus director. Superboy didn’t take the news well, but the truth was far worse. In 2003’s Teen Titans #1 (written by Geoff Johns and penciled by Mike McKone), Robin and Superboy learned Luthor had switched Westfield’s DNA with his own, a revelation that shocked Conner to his core. Let’s hope the live-action version takes the news better than his comics counterpart did.

Echoes of memories caused Conner to travel the Kansas farmlands to explore his roots. The evolution of Clark and Lex’s hometown is another piece of comics lore that had an interesting journey. Early versions of Superman’s origin did little to identify his childhood home, until the 1942 novel The Adventures of Superman (written by George Lowther) established that he grew up on a farm. The comics canon followed suit in More Fun Comics #101 (written by Jerry Siegel and penciled by Joe Shuster), but the town was still unnamed until 1949’s Superboy #2 used the name Smallville for the first time. Smallville’s location, and its proximity to Metropolis, changed over the years depending on the comic. The 1978 Superman film was the first piece of media to place Smallville in Kansas, where it has mostly remained since. 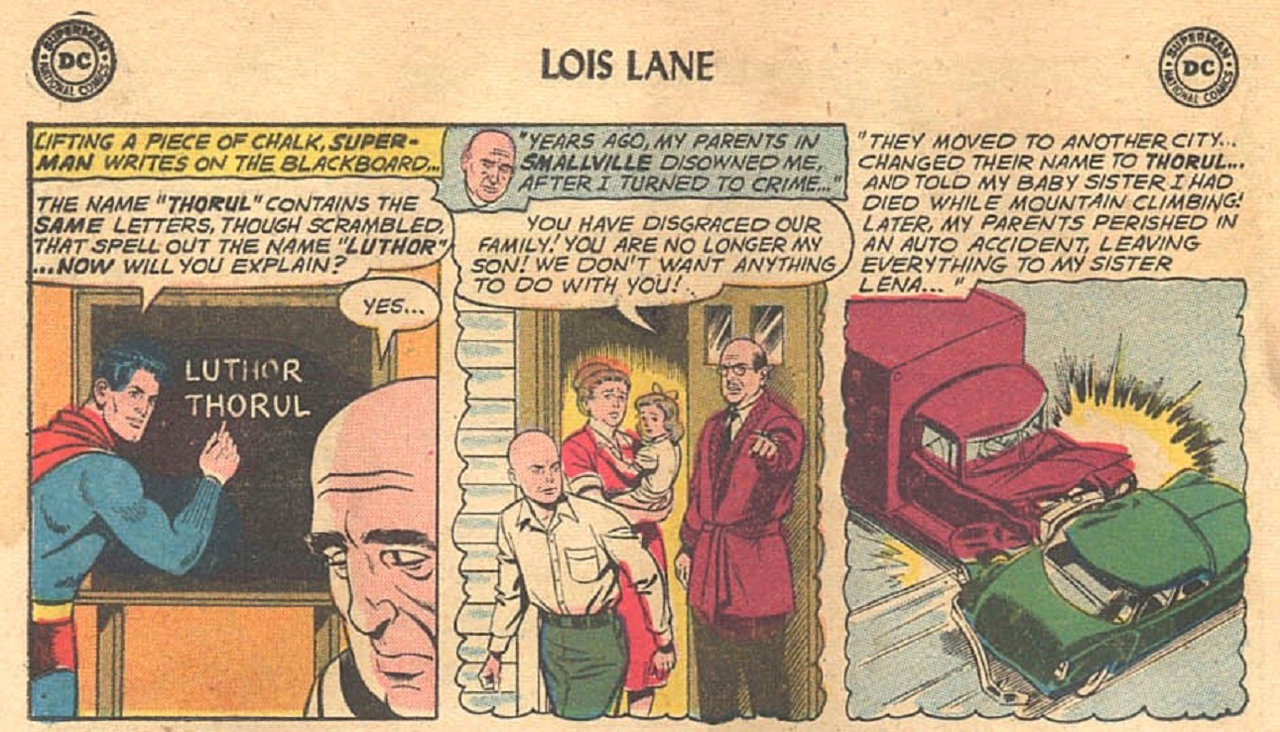 If you were confused about Lex growing up in Smallville, that’s another piece of comics lore that’s a bit older than you might think. 1960’s Adventure Comics #271 (written by Jerry Siegel and penciled by Al Plastino) established that Luthor spent some of his childhood in Smallville, and it was also the first comic to give him the name Lex. Luthor’s father first appeared in Superman’s Girlfriend, Lois Lane #23 (written by Jerry Siegel and penciled by Kurt Schaffenberger) alongside Lex’s sister Lena. (Did you all catch Lena in the photograph Conner was looking at?) Lex’s dad was originally name Jules, but TV’s Smallville gave him the name Lionel, which was popular enough to be added to comics canon in 2003’s Superman: Birthright limited series. 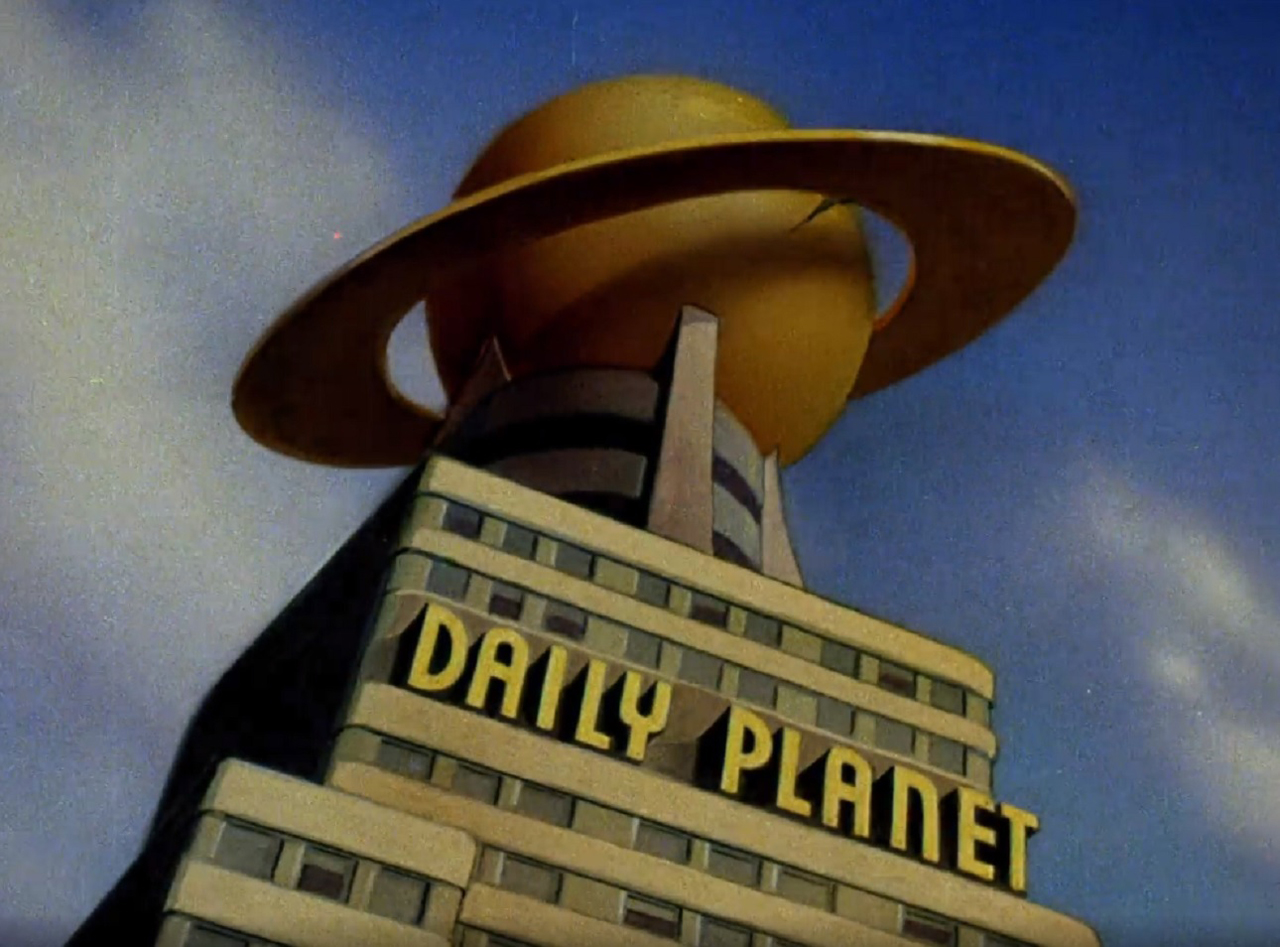 To be a good Easter egg hunter, one must always pay attention to the background. For example… While Mercy and Eve are speaking to each other at Cadmus Labs, a familiar globe be seen in the background along the Metropolis skyline – that of the Daily Planet. When Superman first debuted in 1938, Clark Kent was a reporter for the Daily Star newspaper. Once Superman’s newspaper strip adventures were syndicated nationally, the decision was made to drop the name Daily Star so it wouldn’t be perceived as advertising competitors with the name “Star” in their masthead. By November 1939, the daily strip began using the name Daily Planet, and the comics followed suit in 1940’s Action Comics #23. The famous globe atop the building’s roof first appeared in the Fleischer Studios Superman cartoon “The Artic Giant,” and was added to the comics in 1942’s Superman #19. It’s been an iconic part of the Metropolis skyline ever since!

“Throw Him Through a Wall”

During his road trip with Eve, Superboy was horrified to see a man abusing his girlfriend and wanted to intervene. Eve talked him out of it, and asked if his plan was to throw the abuser through a wall. This references something Superman did in his very first story back in 1938’s Action Comics #1 (written by Siegel and penciled by Shuster). The Golden Age was a different time, and Superman didn’t have the patience he does now, so he took a different approach to justice. It’s probably a good thing this version of Superman wasn’t at that diner with Conner and Eve -- or the entire acre would’ve become a crater.

Experiment 13 and his 12 Brothers 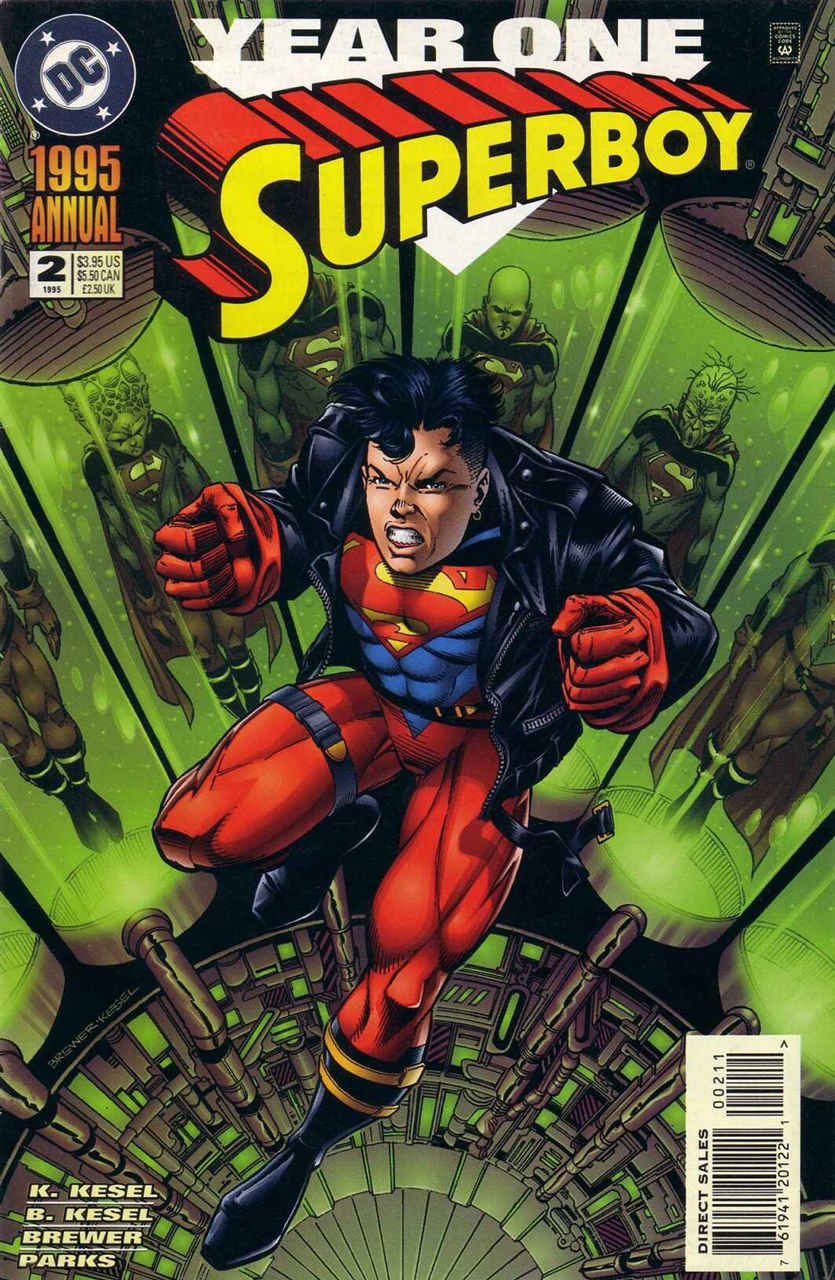 The showrunners did their homework this week! The escaped Superboy was referred to as Experiment 13, a moniker that goes all the way back to Conner’s first appearance in Adventures of Superman #500 (written by Karl Kessel and penciled by Tom Grummett). The scene where Conner comes across the first 12 failed experiments was depicted in 1995’s Superboy Annual #2. Check out the cover above!

Now that Superboy has met the Titans, things are about to get REAL interesting. Don’t forget to watch the episode “Bruce Wayne” this Friday, October 18th, to see what happens next!