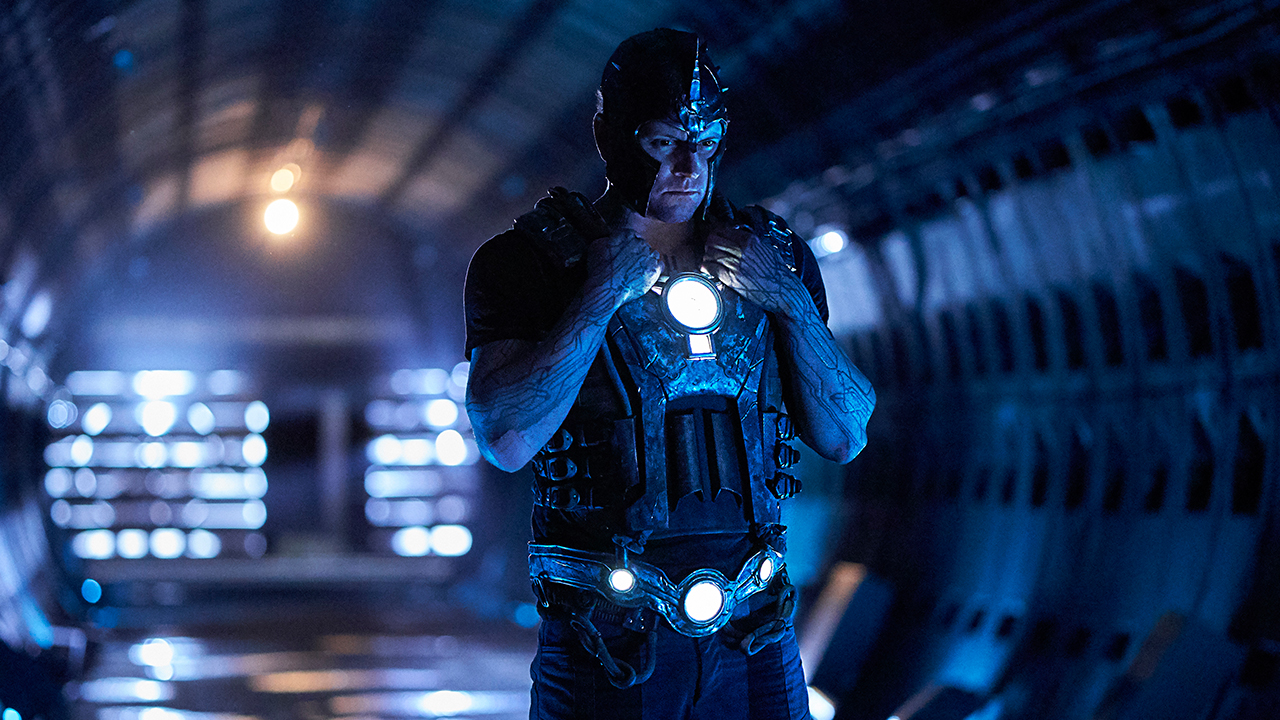 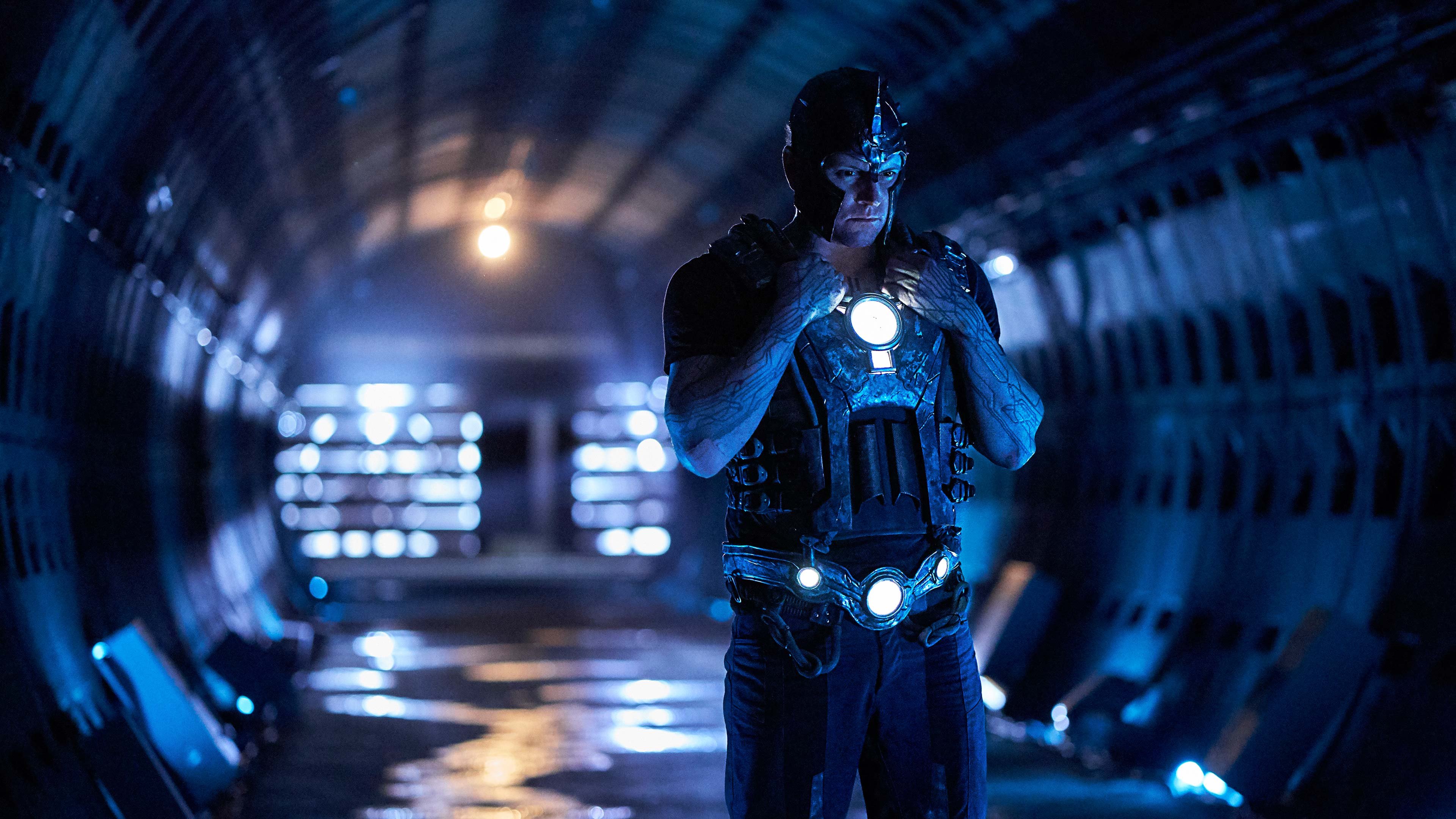 All the Easter Eggs in TITANS Episode 2-03: “Ghosts”

They don’t call him Deathstroke for nothing! Dr. Light and Slade Wilson proved to be a deadly duo in this week’s episode of DC Universe’s ‘Titans.’ Dr. Light was able to escape the reunited original Titans, and Jason Todd got himself captured by the new criminal team. Nobody said season 2 was going to be easy on our heroes! Each week we’ve been taking a look at the comic book references the scripts have given us, so let’s break down the Easter eggs in “Ghosts.” 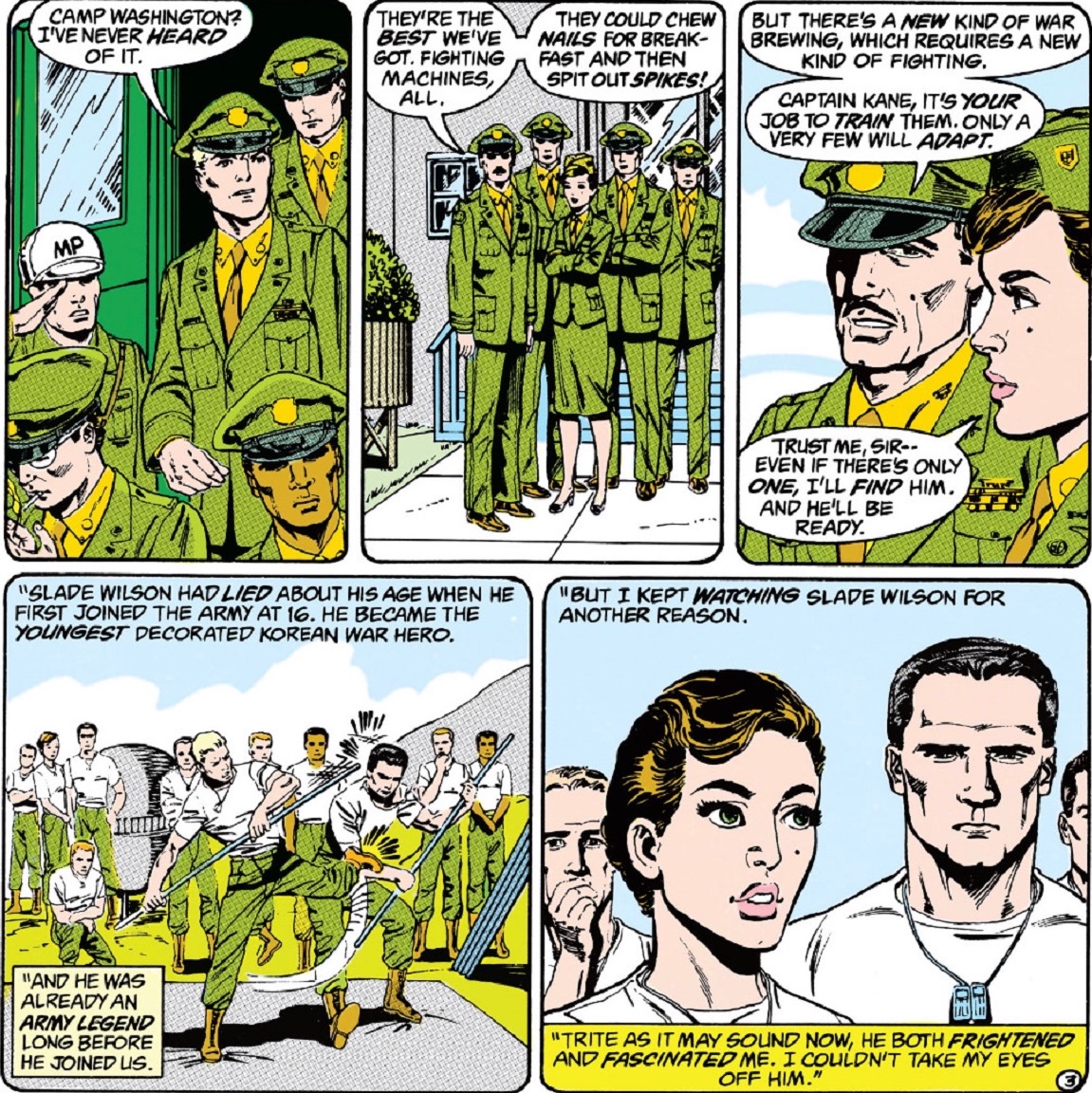 If you’re curious about who Deathstroke is, and why he has the Titans so frightened, the dossier at the beginning of the episode gave some great insights. His background was mostly consistent with the origin given in ‘Tales of the Teen Titans’ #44 (story and art by Marv Wolfman and George Perez), which revealed that he was a military man who was given a super serum. The dossier also mentioned his association with HIVE, the mysterious criminal cabal that had been plaguing the Titans ever since 1980’s ‘New Teen Titans’ #2. HIVE stands for Hierarchy of International Vengeance and Extermination, and they’re the reason Deathstroke crossed paths with the Titans in the first place. The Titans eventually took down the organization in ‘Tales of the Teen Titans’ #47, but various revivals have popped up in subsequent years. If you hit pause while Deathstroke’s dossier is on the screen, then you’ll also notice ARGUS is one of Deathstroke’s affiliated organizations. ARGUS is an agency that acts as a liaison between superheroes and the government, first appearing in 2012’s ‘Justice League’ #7 (written by Geoff Johns, penciled by Gene Ha and Gary Frank). Deathstroke has quite a resume, and it’s clear that his credentials are enough to put a lump in Dick Grayson’s throat. Can the Titans survive the season?

The Fall of Jericho 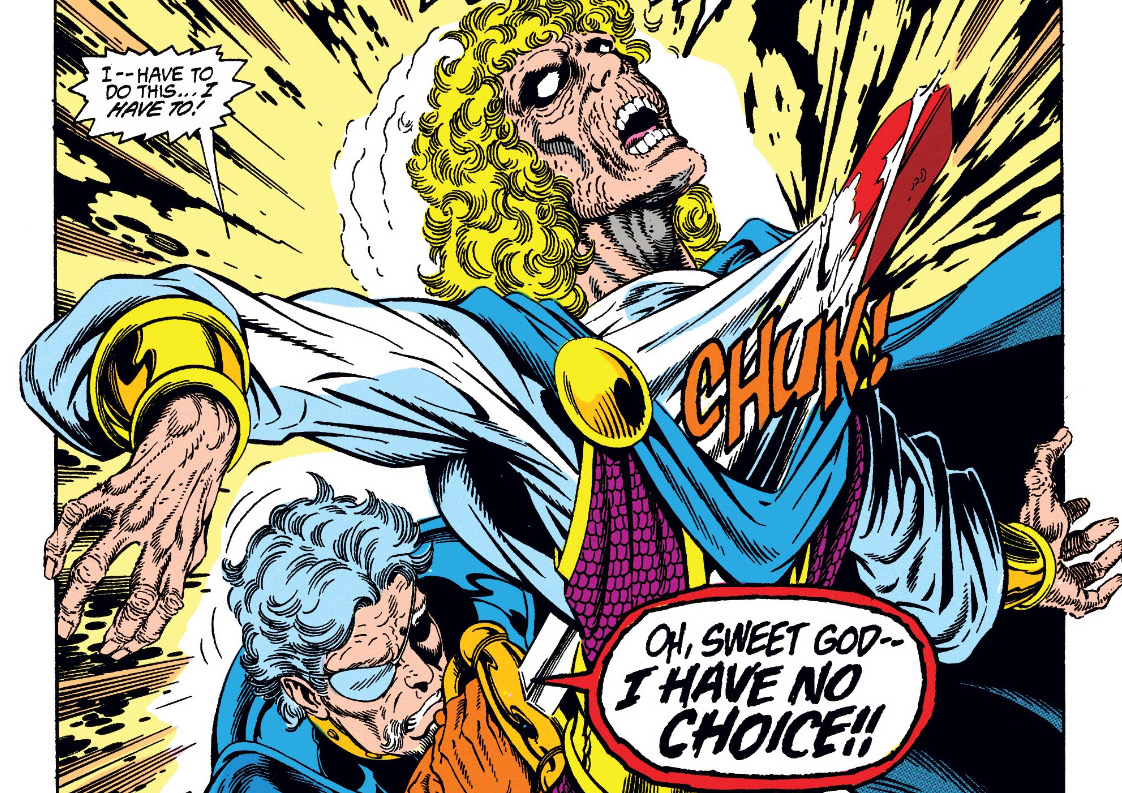 This week gave us more insight to the past, as the Titans mentioned their history with Deathstroke, and it was hinted that he was responsible for the death of his son, a boy called Jericho. The truth is still being revealed, and there might be more to the story than meets the eye. If we do take the story at face value, then this is in line with how Jericho fell in the comics. During the “Titans Hunt” storyline, Jericho became corrupted by the demonic souls of Azarath, which forced him to attack his Titans teammates.  In ‘The New Titans’ #83 (written by Marv Wolfman and penciled by Tom Grummett) the real Jericho was able to briefly break through the control, and beg his father to free him from the tortured existence by ending his life. Slade reluctantly complied, and drove his sword through his son’s back. While Jericho was eventually revived, the event was one of the darkest chapters in Slade’s life. The circumstance of Jericho’s screen death are still a mystery, and time will tell what hand the Titans and Deathstroke had in it. 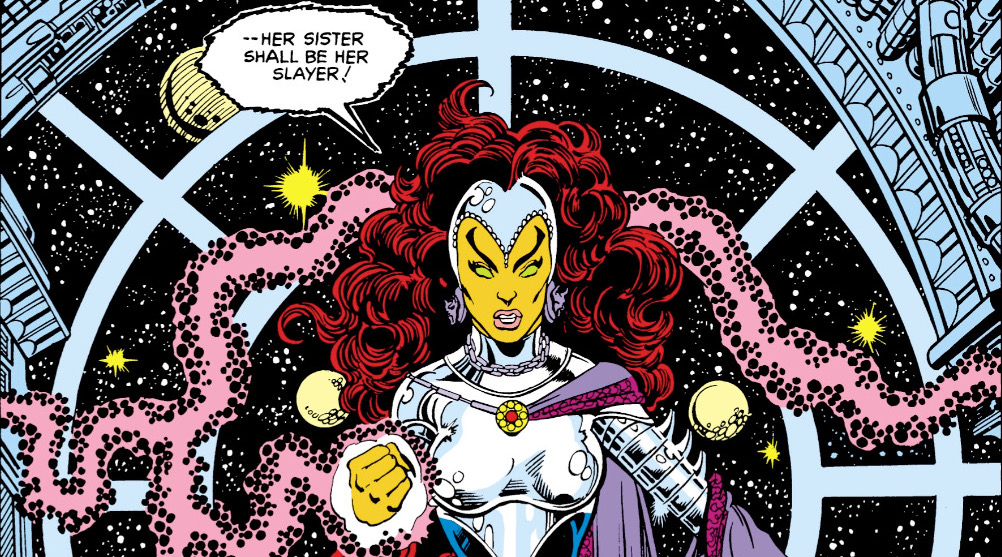 Slade wasn’t the only person who had an iconic family member referenced this episode. This week Kory learned that her sister Blackfire had summoned her back to Tamaran. Blackfire, whose birth name is Komand’r, was first mentioned by Kory in 1980’s ‘New Teen Titans’ #2 (story and art by Marv Wolfman and George Perez). Readers finally got to meet her in 1982’s ‘New Teen Titans’ #22 shortly before ‘Tales of the New Teen Titans’ #4 gave a detailed account of her backstory. Blackfire was the black sheep of the family, who resented her sister and did everything she could to make her existence miserable. She eventually crossed the line into attempted regicide and treason. Keeping all of that in mind, whatever she wants with Kory can’t be good. 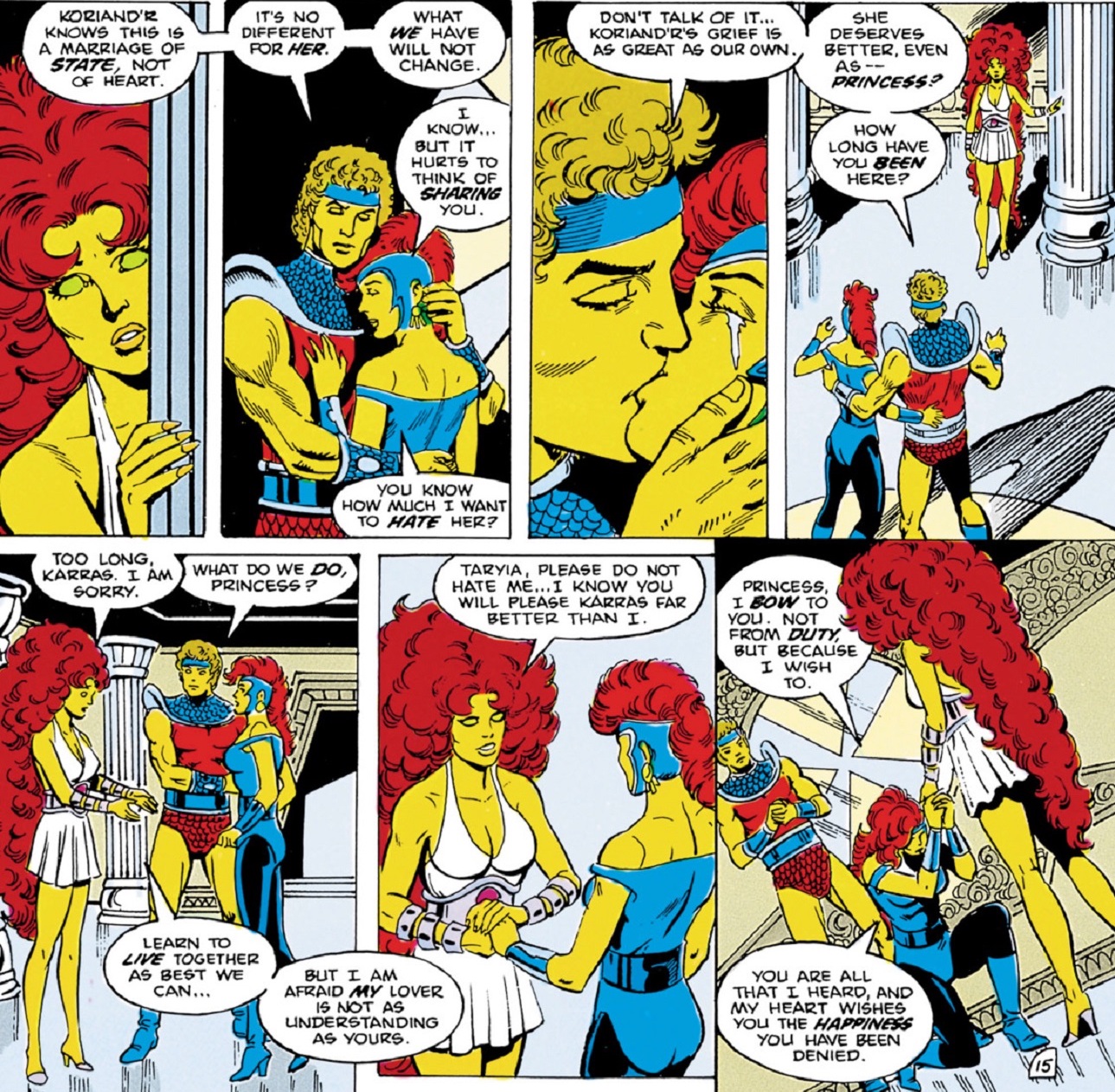 As Kory attempted to show her escort Faddei the beauty of Earth, she talked about the restrictive nature of Tamaran’s marriage customs. Although  Tamaran is very open minded when it comes to love, 1986’s ‘The New Teen Titans’ #16 (written by Marv Wolfman, illustrated by Chuck Patton and Romeo Tanghal) revealed that marriages were a more complicated matter. During a trip home to Tamaran, Kory was ordered into an arranged marriage with Karras, which infuriated Nightwing. Karras was also in a loving relationship, and he had every intention of carrying on his romance after marrying Kory, which all parties were aware of. Although Kory tried to convince Dick that marriage and love did not always go hand in hand on Tamaran, with spouses free to carry on affairs, Nightwing was mortified by the entire arrangement. Can you really blame him?

Although the threat of Deathstroke and Dr. Light hung over their heads, Dick and Hank still found time to happily reminisce about some of their more upbeat Teen Titans adventures. Hank mentioned “the odd cult retreat” while Dick brought up “bad jam bands.” Many of the Titans earliest adventures involved helping out troubled rock bands, a tradition that began in ‘Showcase’ #59 (written by Bob Haney and penciled by Nick Cardy) when the Flips were framed for robbery. This scenario repeated itself a few times, because the Silver Age was full of criminals who just wanted to frame teen idols. Robin and a few of his Titan teammates did get to take down a cult during a backup story that ran from ‘Batman’ #241-242 (written by Mike Friedrich and penciled by Rich Buckler), which wasn’t as much fun as their rock and roll adventures. Will we see a Flips cameo before the end of the season? Pretty please?