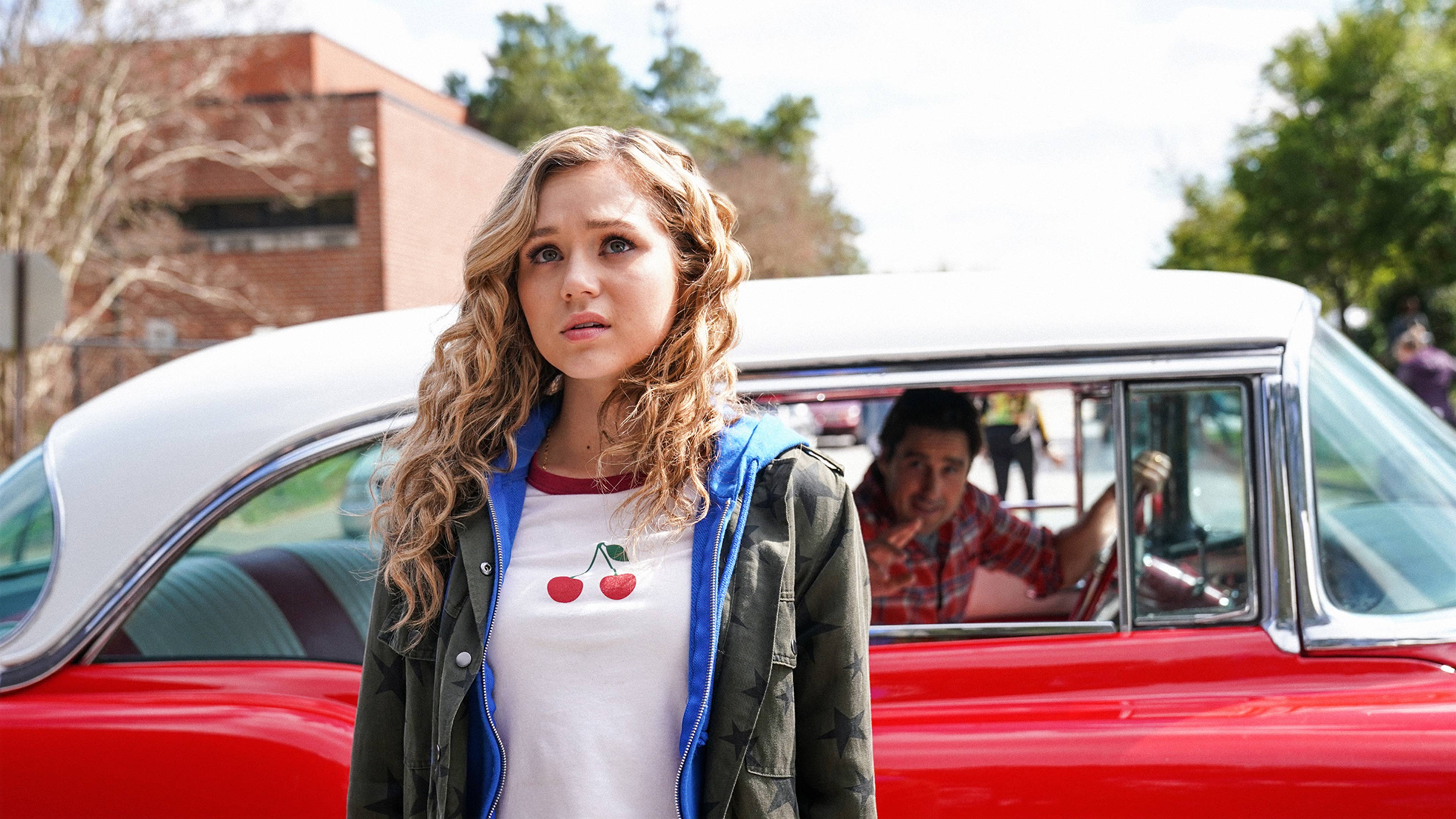 All the Easter Eggs from STARGIRL’s Series Premiere

Stargirl has arrived, and words can’t express how amazing it is! The show is not only a love letter to the Justice Society, but the legacy of the DC Universe as a whole. The first episode was filled with many homages and Easter eggs to DC’s rich history, and we’re blown away by just how obscure some of the references were. Here’s our rundown of all the Easter eggs we found in Stargirl’s premiere episode! 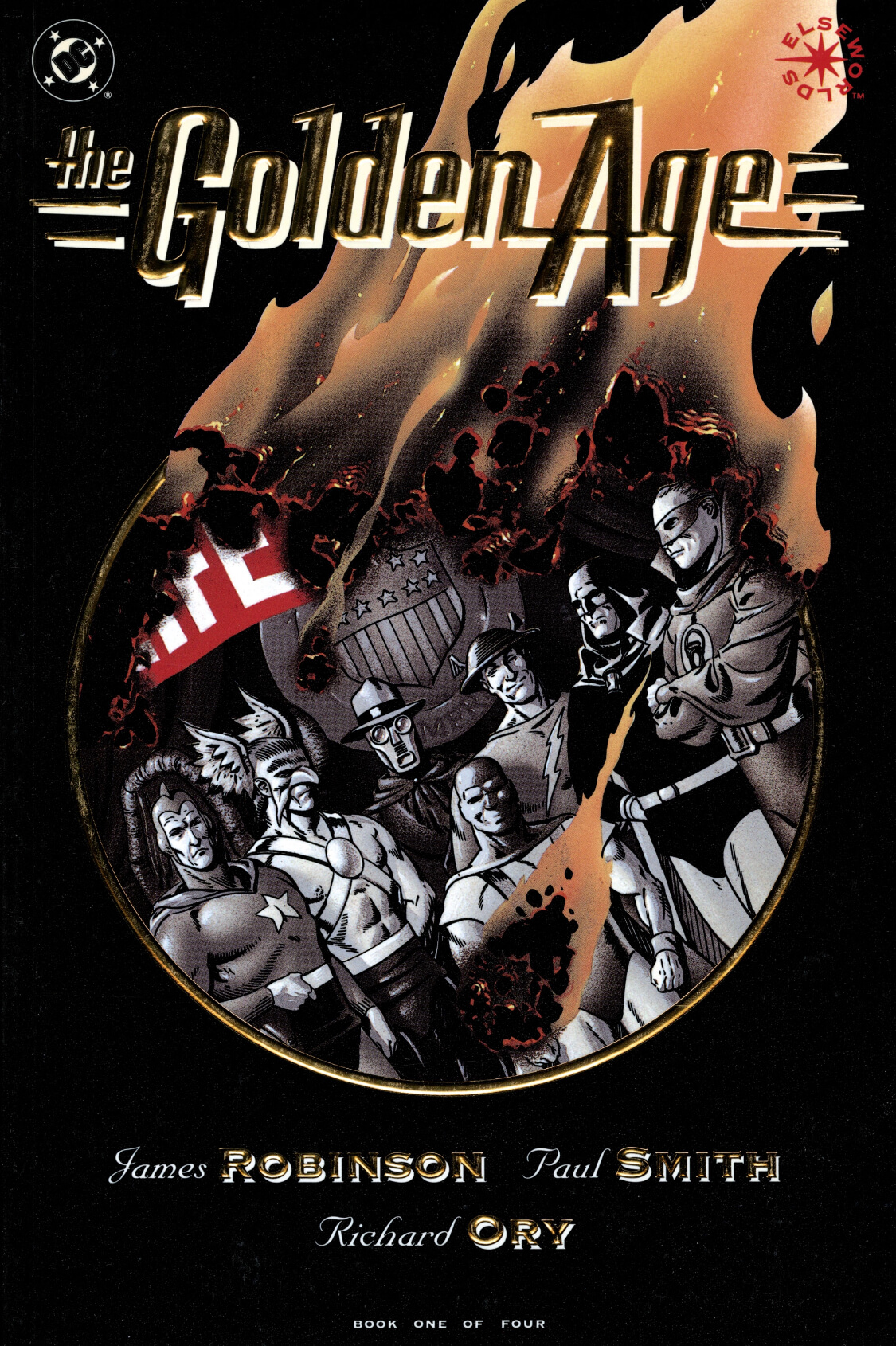 The series begins with a title card setting the stage for “a Golden Age of Heroes.” In case you’re new here, the Golden Age is a fandom term referring to the earliest years of superhero comics. The Justice Society, the Star-Spangled Kid, and Stripesy all got their start during this era. In addition, The Golden Age is the name of a critically acclaimed Elseworlds limited series that brought some obscure characters from that era into the spotlight. The comic proved so popular, that elements from it were later brought into the main continuity, particularly with James Robinson’s Starman series. 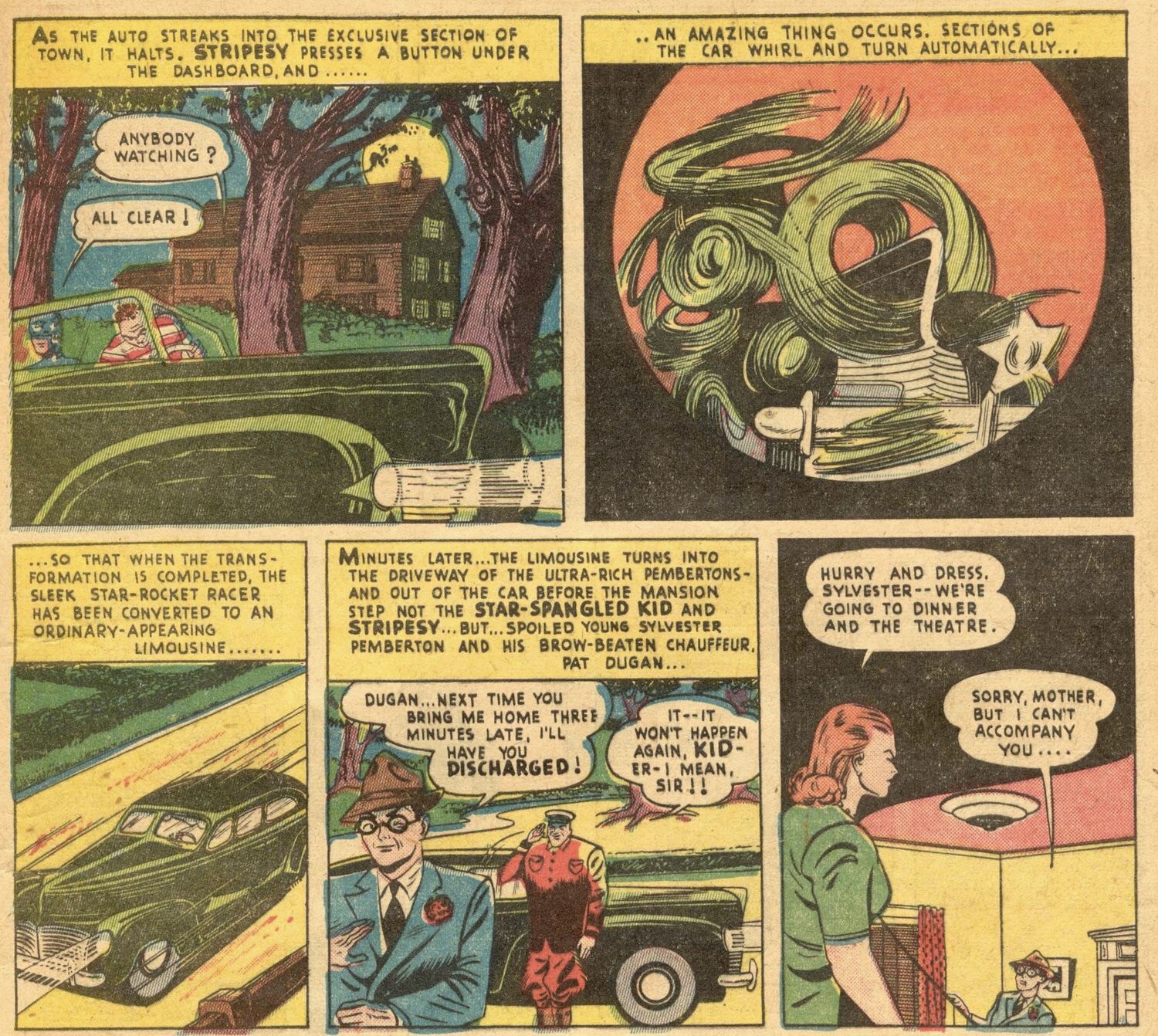 The episode opens with Stripesy racing to the battle in his customized car. The flying vehicle, known as the Star-Rocket Racer, first appeared in 1941’s Star-Spangled Comics #1 along with the Star-Spangled Kid and Stripesy. In addition to flight, the vehicle had the power of camouflage, and could transform into the Pemberton family limousine. It’s changed colors a few times over the years, but we think the red version looks the best.

FALL OF THE JSA

Earlier this week we ran an article covering the heroes and villains from the Justice Society’s final battle, but if you look closely you may have seen a few extra members who weren’t cast. As Stripesy arrives at the mansion, a green comet could be seen flying through the roof. This is most likely the final moments of Alan Scott, the original Green Lantern. After Stripesy pulls the icicle out of Starman’s chest, the helmet of Jay Garrick, the original Flash, can be seen discarded on the floor. The camera then pans up to reveal the body of Sandman lying on the stairs.

We also got two villains that had not been revealed in the original casting reports. The Wizard is a villainess sorcerer who first put the Injustice Society together in All-Star Comics #37. The monstrous beast who chases the Star-Rocket Racer is Solomon Grundy, a reanimated corpse who first fought Green Lantern in All-American Comics #61. In fact, Solomon Grundy had a direct hand in Sylvester Pemberton’s death in the comics as well, as seen in Infinity Inc. #51. 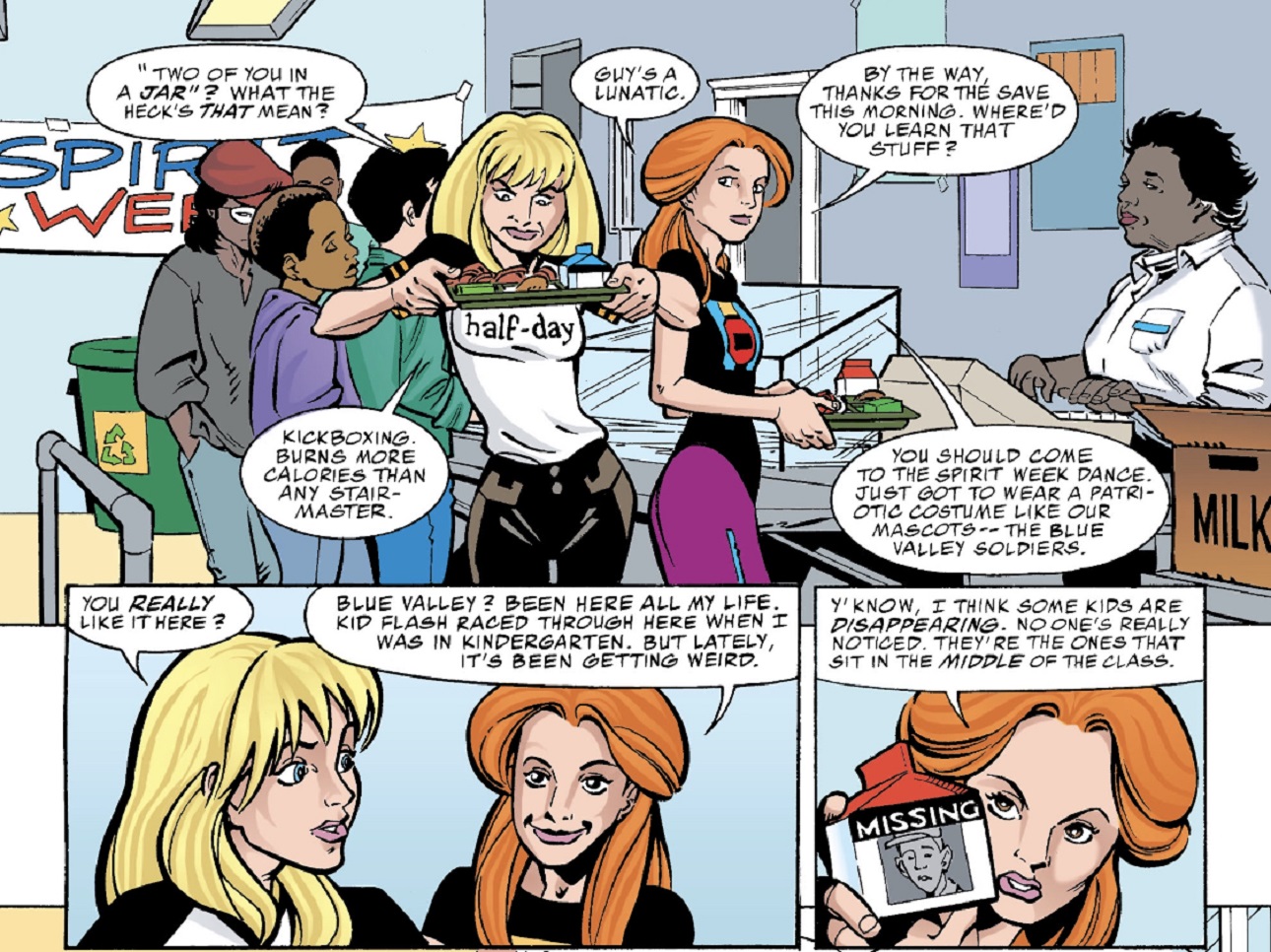 After the fall of the JSA, the scene shifts to young Courtney Whitmore, who is spending Christmas Eve with her friend Mary Kramer. When the timeline shifts to present day, Courtney is heartbroken that moving from Beverly Hills means leaving her bestie Mary behind. Mary Kramer first appeared in Stars and S.T.R.I.P.E. #0 and while she was Courtney’s best friend, her role in the comics was different. Instead of being the hometown buddy Courtney left behind, Mary was the first new friend Courtney made when she moved to Blue Valley.

If you’re a comic aficionado, then the logo on the moving truck probably looked familiar to you. American Action Movers is a reference to Action Comics, the Golden Age series that introduced Superman. This Easter egg was also taken directly from Stars and S.T.R.I.P.E. #1.

As Courtney is saying goodbye to her bedroom for the last time, one of the show’s most poignant Easter eggs can be seen on her photo board. The center of the bulletin board features a photo of Courtney and a friend sitting on a bench as Courtney flashes a peace sign. The girl that she’s sitting with is Courtney Johns, Geoff John’s sister and the inspiration for Stargirl. Courtney Johns was killed in a 1996 plane accident, and Geoff created the character Courtney Whitmore as a tribute to her.

“Geoff brought in pictures of his sister. Obviously they were from the 90’s so the picture quality was very different from what we got shooting Brec, but we made it work. That picture is there in Courtney’s room all season long,” graphic designer Shawn McBee explained on the Stargirl Aftershow Podcast. “The real Courtney was on set, all day, every day. She was in the hearts and minds of so many people on the set. Brec in particular felt the strong need to honor her. All of this only exists because Geoff wanted to honor her.”

Blue Valley might not have the name recognition that Metropolis or Gotham has, but it’s been an important part of DC’s history since it was first seen in 1960’s The Flash #111. The small town was originally the home to Wally West, who patrolled the city as Kid Flash when he wasn’t visiting his Uncle Barry in Central City.

As the Dugan/Whitmore family drives into Nebraska, a sign can be seen for Donner County. This is a reference to Richard Donner, director of Superman: The Movie, and Geoff John’s mentor. Johns credits Donner with giving him his start in the entertainment industry, and if it wasn’t for him we might have never been able to watch this show.

The town of Blue Valley is filled with Easter eggs. For example, when Courtney rides the Cosmic Staff past the movie theater, the marque is advertising a movie called The Liberty Files. This is a reference to the Elseworlds limited series JSA: The Liberty Files. There’s a campaign poster in a shop window imploring voters to re-elect Councilman William Zarick. The design and phrasing on the poster are a direct reference to Mayor Goldie Wilson’s campaign posters from the Back to the Future trilogy. 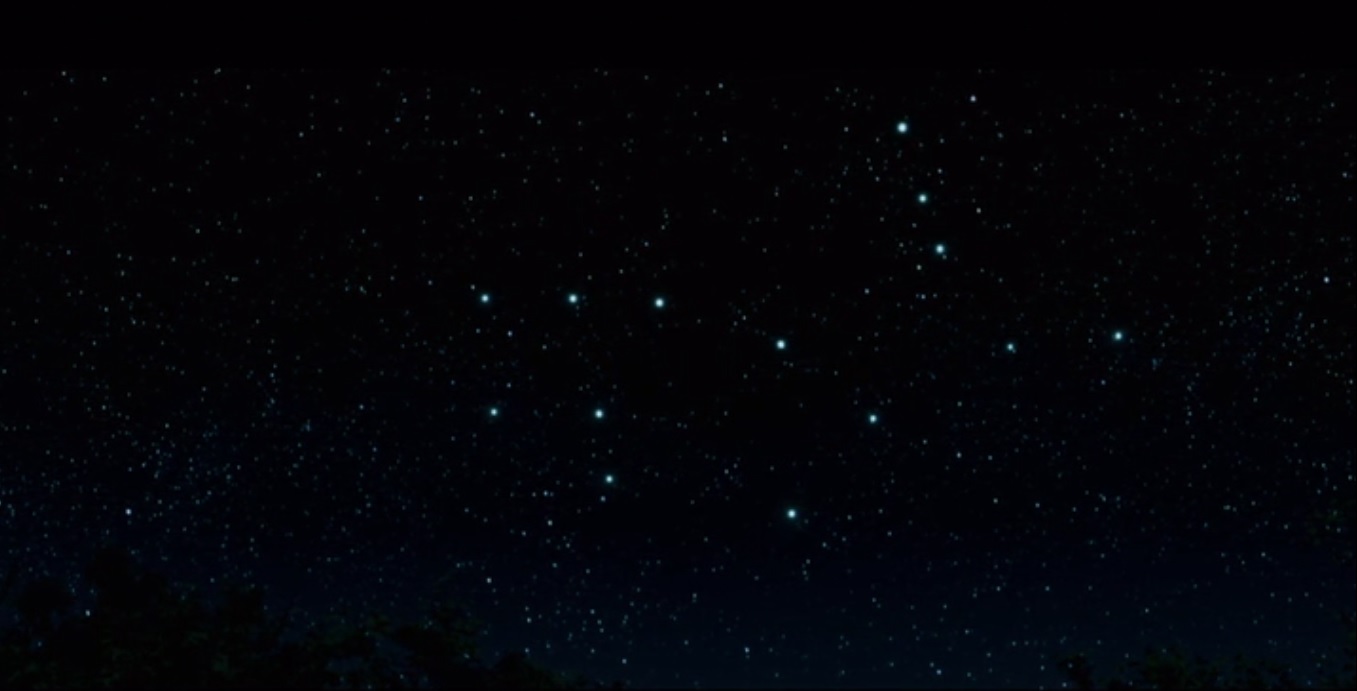 During Courtney’s first night in her new home she gazes out her window at the stars. Before the scene shifts to the next day, a constellation can briefly be seen. That constellation is Virgo, who is known as the Young Maiden of Justice. Does that description sound like it could apply to anyone else? 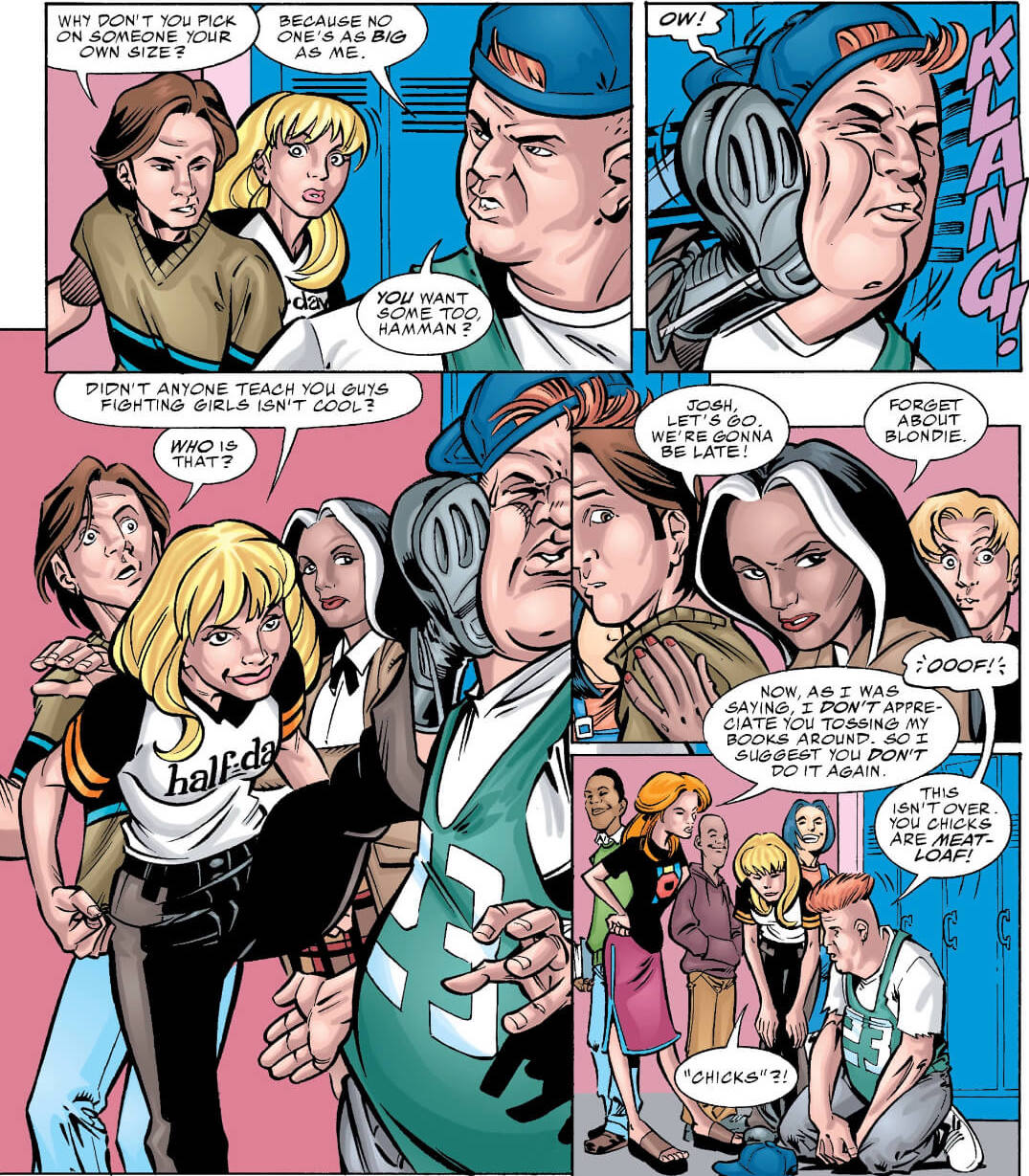 Courtney’s Blue Valley classmates are a who’s who of DC heroes and villains, and we covered most of them in our character breakdown article, but there are a few minor classmates who didn’t make the cut. Josh Hamman and Travis Thomas can briefly be seen during the school scenes. Both boys first appeared in Stars and S.T.R.I.P.E. #1, and played a heavy role in the rest of the series. Josh was Cindy’s boyfriend, but Courtney was the one he really wanted to be with. Randy was a school bully who had a secret crush on Courtney’s friend Mary. 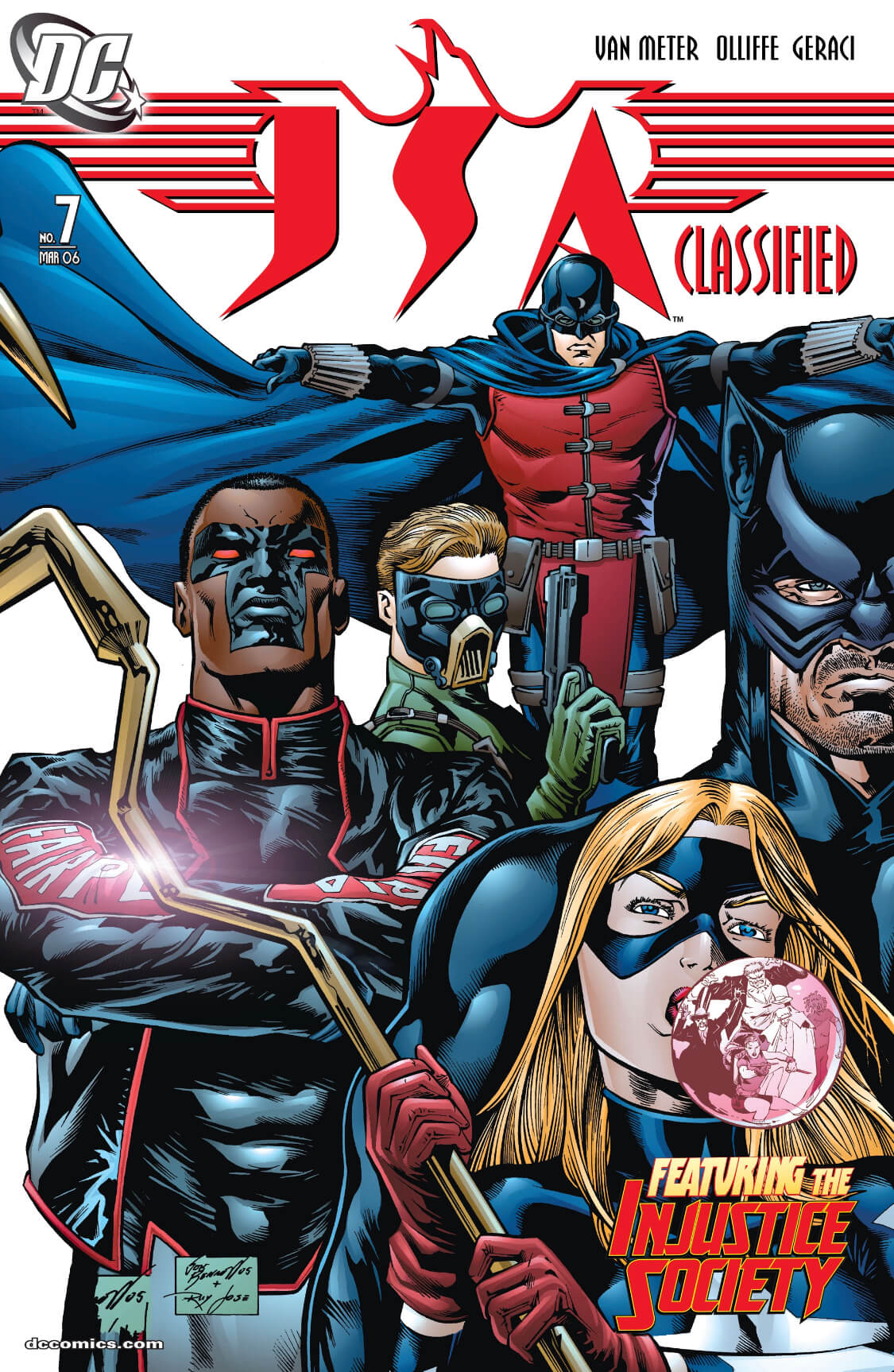 While rummaging through his trunk, Pat goes through a list of folders marked “JSA Classified.” This is a reference to JSA: Classified, an ongoing Justice Society spotlight series that regularly featured Courtney. 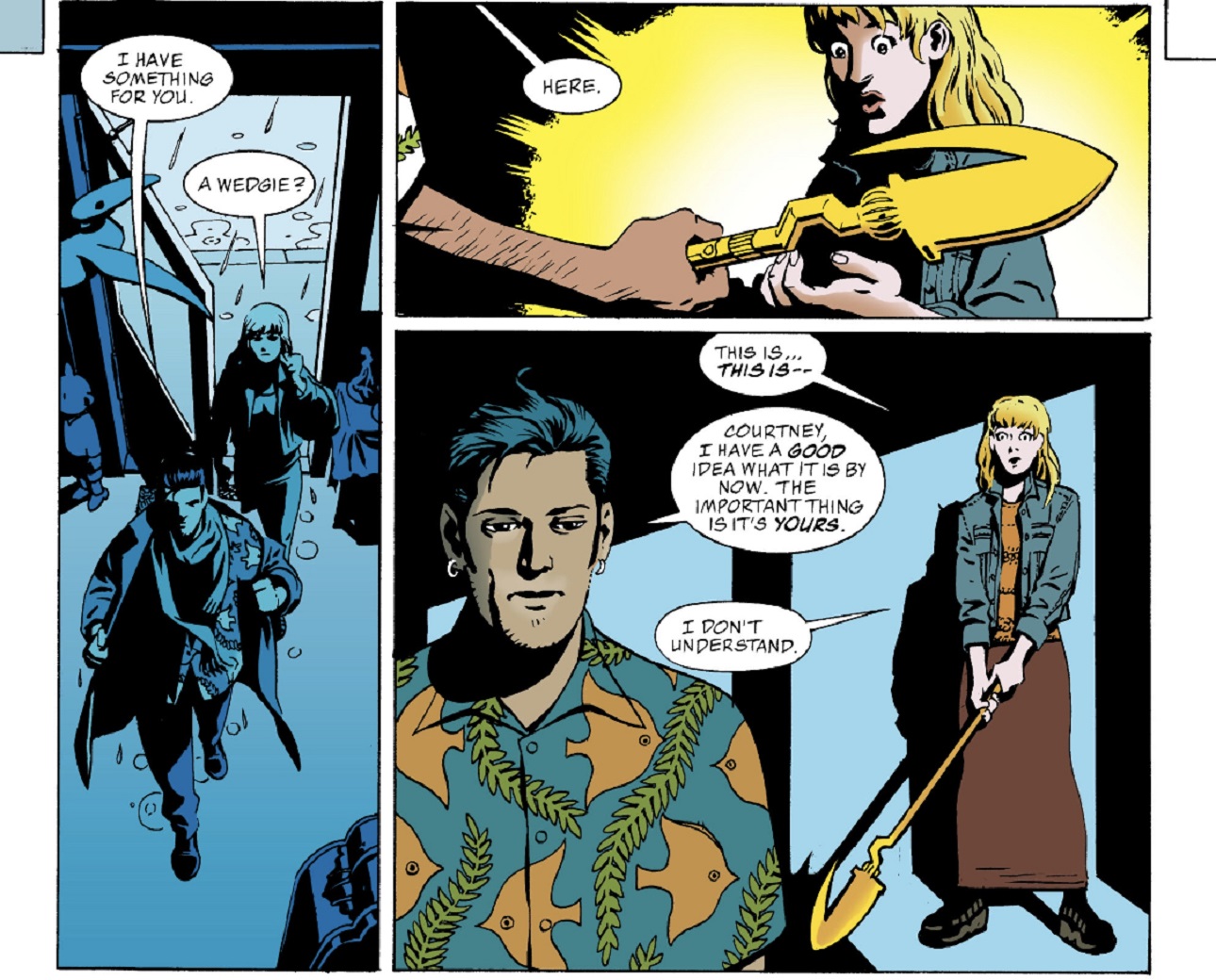 The Cosmic Staff is an important part of DC lore, with a legacy dating back to Adventure Comics #61 (reprinted in 1971’s Justice League of America #94). Originally it was called the Gravity Rod, and it was the tool used by Ted Knight, the first Starman. The Cosmic Staff drew it’s power from the solar energy given off by orbiting stars. The comic book version of the Staff isn’t as sentient as it is in the Stargirl television series, but it still had some extraordinary features. The Cosmic Staff can repel objects, manipulate gravity, suspend living beings in place, and become mentally attuned to it’s owner. Sylvester Pemberton was gifted the Cosmic Staff in All-Star Comics #58.

Courtney originally got her powers by using Sylvester Pemberton’s Cosmic Converter Belt, and wasn’t given the Cosmic Staff until Starman #80 when Jack Knight passed it on to her.

How awesome is that Justice Society photo? From left to right, the top row members are Johnny Thunder, Green Lantern, Hawkgirl, Flash, Hawkman, Dr. Fate, and Thunderbolt. From left to right, the bottom row members are Wildcat, Hourman, Starman, Sandman, and Dr. Mid-Nite. If you want to learn more about these characters, check out our recommended reading list for beginners. 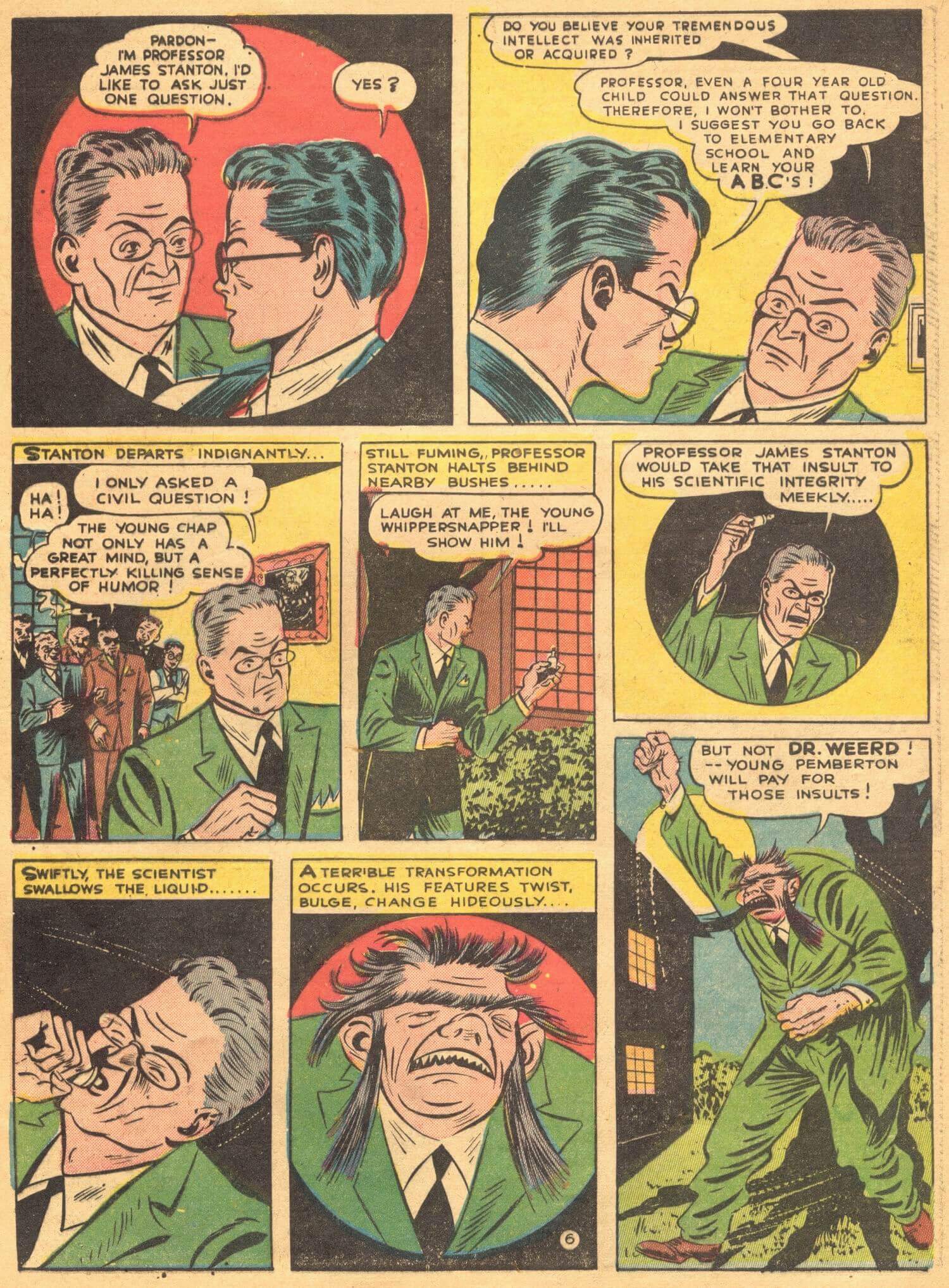 While looking through the contents of Pat’s trunk, Courtney finds an old newspaper with a headline about the Star-Spangled Kid and Stripesy battling a villain called Doctor Weerd. The newspaper references Civic City, which was the base of operations for Sylvester and Pat during the Golden Age. Doctor Weerd was a college professor who took a formula to turn himself into an ogre. He first appeared in Star-Spangled Comics #1, and battled the Star-Spangled Kid and Stripesy throughout the first year of the title. He was motivated to go after the duo after Sylvester insulted his intelligence in front of his colleagues. Doctor Weerd may have had a strong mind, but he had a weak ego.

FROM PANEL TO SCREEN

Here’s a sample of some of the scenes the first episode of Stargirl brought to life! 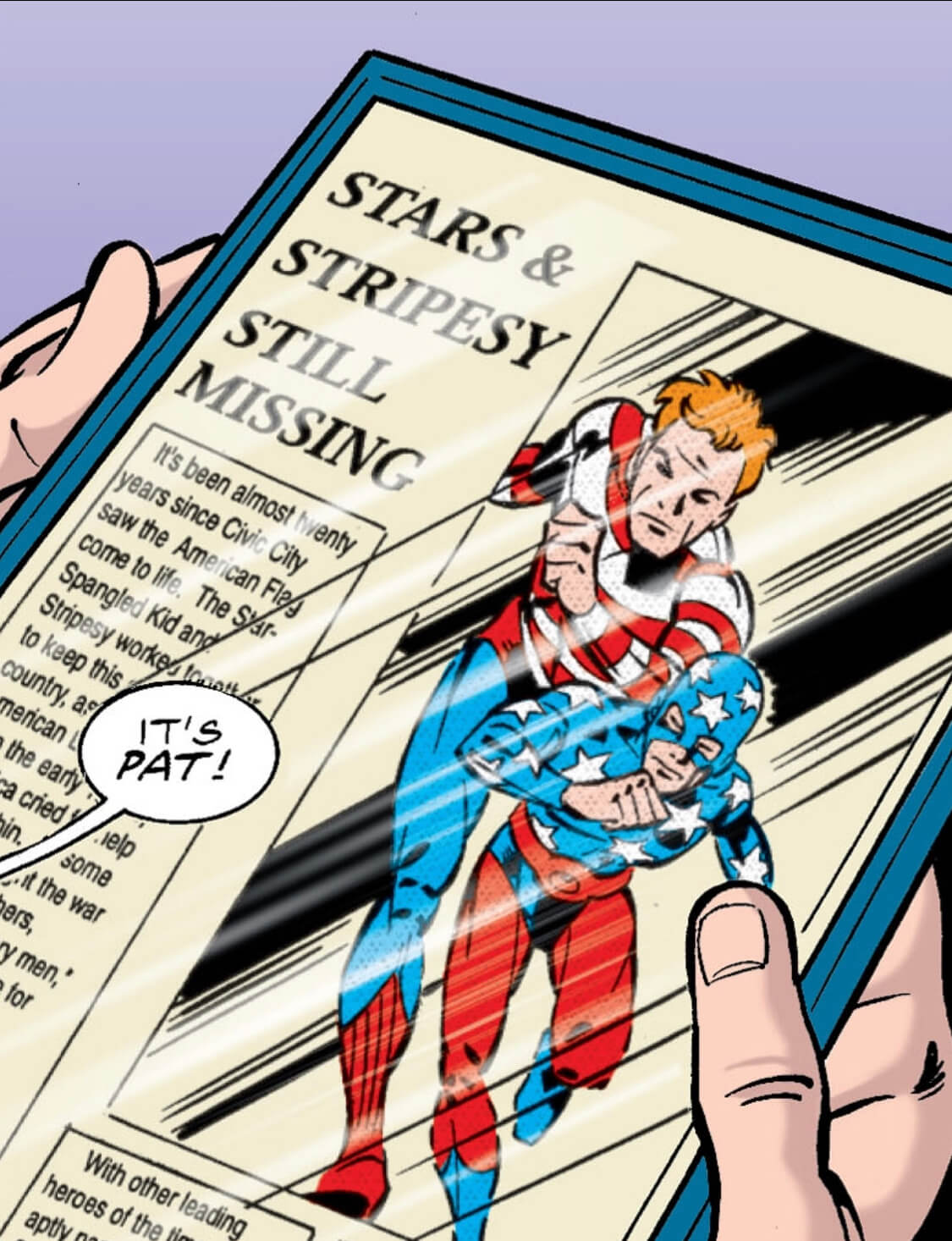 Did you find any Easter eggs that we missed? Let us know in our Community!