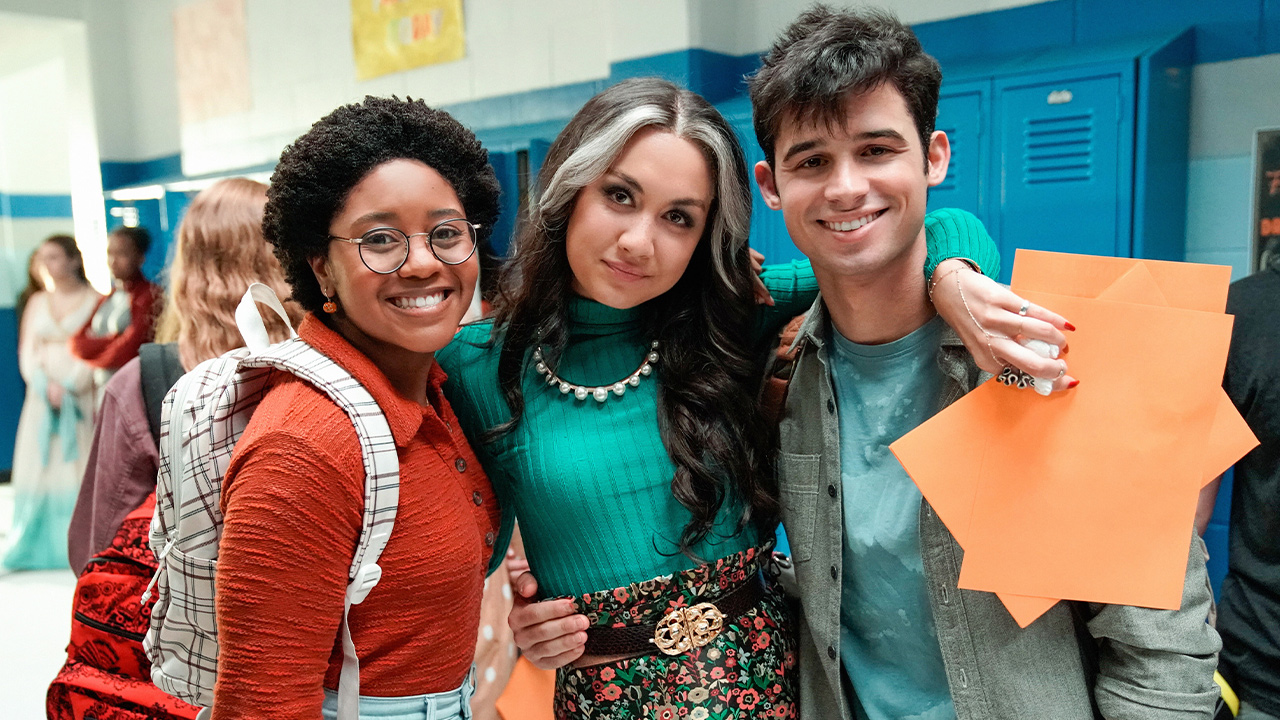 All the Easter Eggs in STARGIRL Episode 5: “Hourman and Dr. Mid-Nite”

Courtney’s new Justice Society is coming together! The latest episode of DC Universe’s Stargirl introduces new versions of Hourman and Doctor Mid-Nite, ushering in a new age of heroes. This episode contains some great nods to classic DC lore, so let’s break down all the Easter eggs we found in “Hourman and Dr. Mid-Nite.”

The first Easter egg of the episode occurs in the first minute, as Rex Tyler is preparing a package for Pat Dugan. The address listed for Dugan is 1941 Siegel Way, a reference to the year the Star-Spangled Kid and Stripesy were created, and Jerry Siegel, the writer responsible for their first appearance. In addition, 1941 was also the year the Justice Society debuted in All-Star Comics #3.

The Tyler family lives out in West Farms, which seems to be a reference to Blue Valley’s most famous resident – Wally West. Years before Stargirl and S.T.R.I.P.E patrolled Blue Valley, Wally protected his hometown as the speedster Kid Flash. Since Wally wasn’t Barry Allen’s ward or son, he didn’t live with his mentor in Central City, and would commute to their superhero team-ups when he was out of school. As a result, most of Wally’s adventures appeared as solo back-up stories in The Flash comic, where the teen hero fought crime in Blue Valley. The first such back-up appeared in 1960’s The Flash #111. After Wally grew up to become the Flash, and his identity was publicly revealed, Blue Valley erected a sign proudly proclaiming itself the birthplace of Wally West. 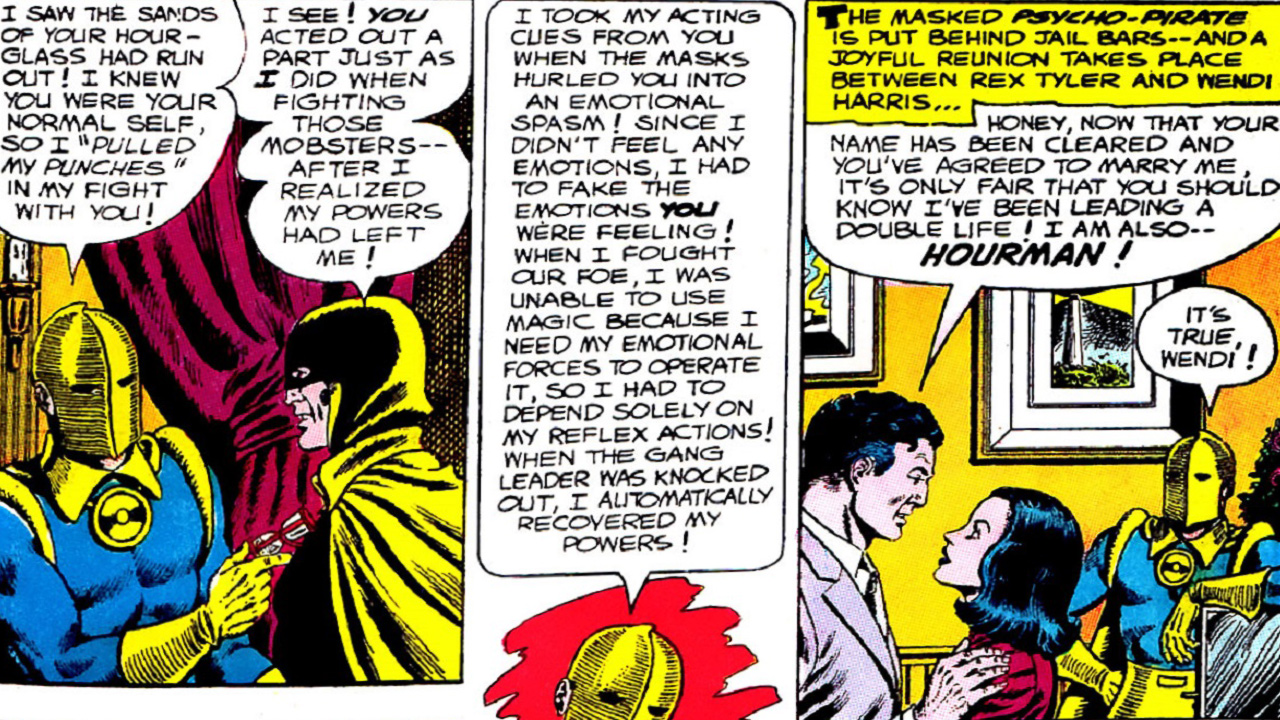 This episode introduces Wendi Tyler, wife of the original Hourman and mother to Rick Tyler. Wendi first appeared in 1965’s Showcase #56, where she was manipulated and framed by the villain Psycho Pirate. Her fiancé Rex Tyler helped clear Wendi’s name by suiting up as Hourman and teaming up with Doctor Fate. Once the adventure was over, Hourman revealed his secret identity to Wendi. This episode referenced Wendi’s maiden name, “Harris,” which also comes from Showcase #56. Curiously, she isn’t the only Wendi Harris in the DC Universe. 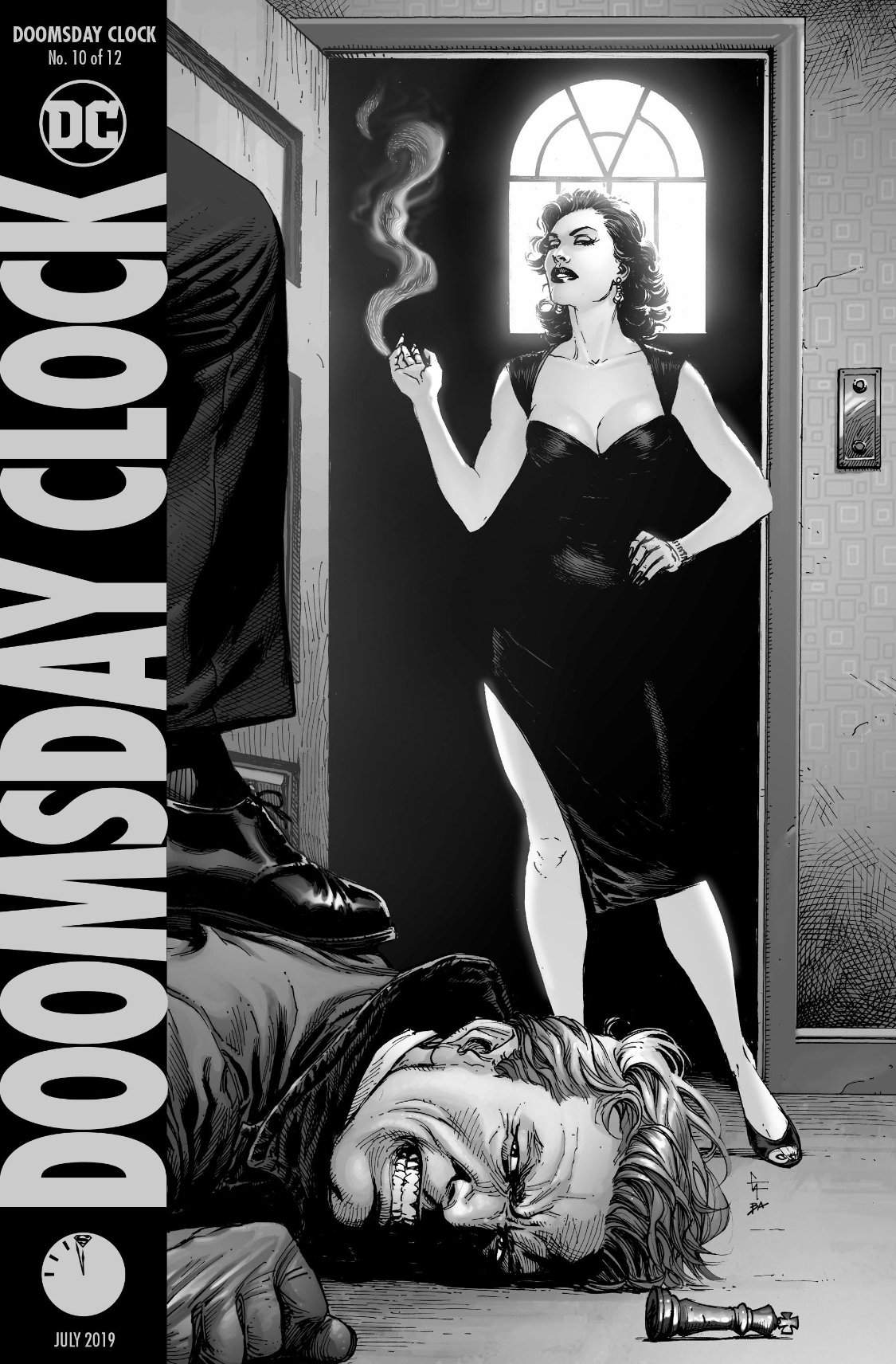 Pay close attention whenever you see the Blue Valley movie theater, because the posters are a great big basket of Easter eggs. In the first act of this week's episode you might be able to spot a poster for “The Rita Farr" Story. This is a reference to Rita Farr, an actress within the DC Universe whose career ended when an accident turned her into Elasti-Woman. You can learn more about Rita’s origin by reading the story in which she first appeared, in My Greatest Adventure #80, or by watching DC Universe’s Doom Patrol. A poster for a movie called “A Killer Calls” can also be spotted, starring Carver Colman. “A Killer Calls” and the rest of Carver’s cinematic career were spotlighted in Geoff Johns and Gary Frank’s Doomsday Clock, where we learned that Colman played famed DC Universe detective Nathaniel Dusk. Shortly before Rick wrecks his uncle’s car, a poster for a Sgt. Rock movie can briefly be seen in the background. If you want to get a better look at the posters, Stargirl graphic designer Shawn McBee has uploaded them onto the Stargirl Aftershow Podcast website. We don’t know about the rest of you, but we really want to see some of these movies!

THE EMPIRE STRIKES BACK 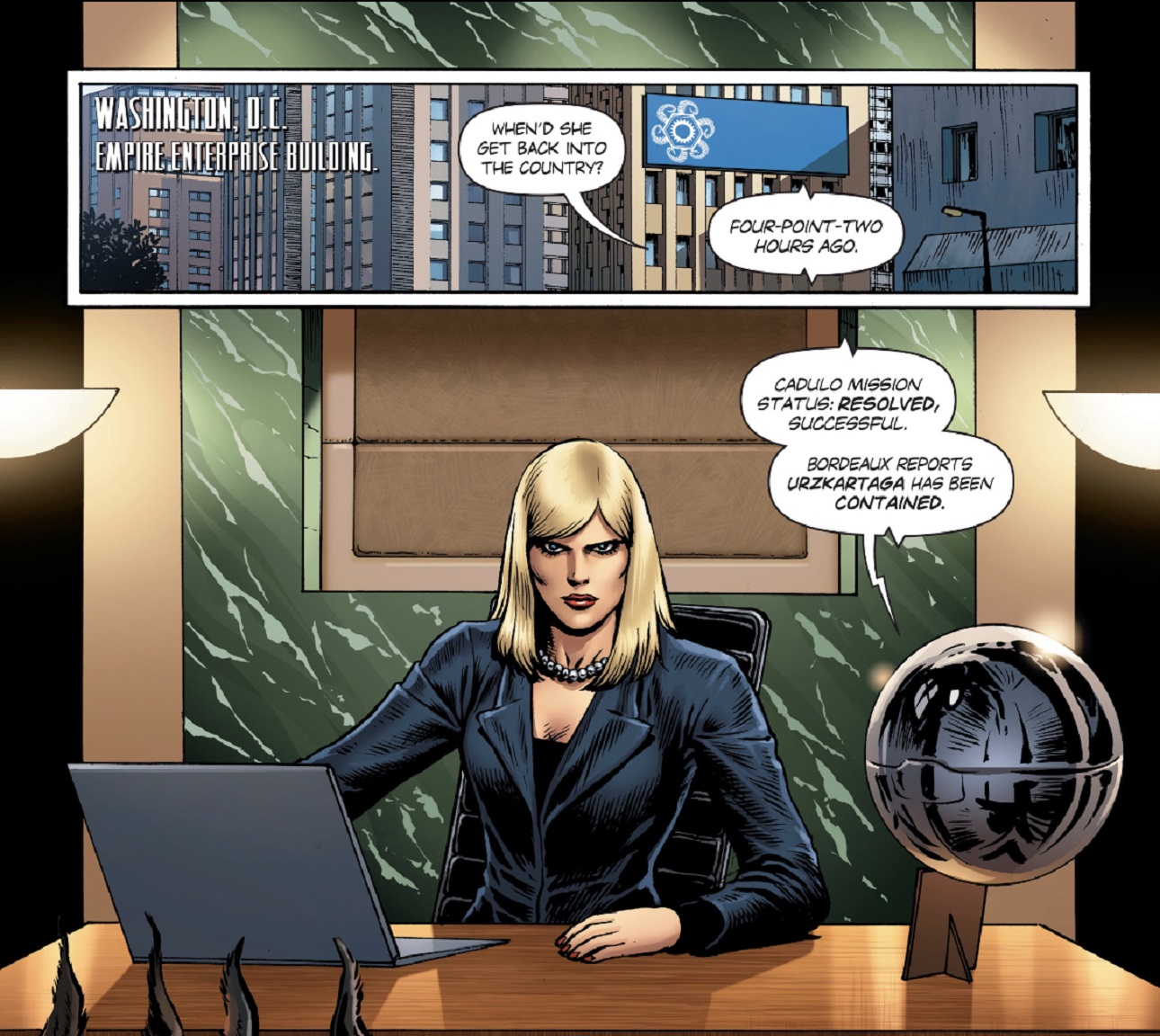 We’re not sure what the Injustice Society is up to, but it sure is creepy. The Gambler made a suspicious backroom deal with an employee of Empire Enterprises that resulted in three murders by the end of the episode. Empire Enterprises is an organization that first appeared in 2016’s Wonder Woman #9, and if you pay close attention you might notice that the logo closely matches the one that appears in the comics. Empire Enterprises is run by Veronica Cale, who is a corporate enemy of Wonder Woman. If you know anything about Cale and her ledger of crimes, you might conclude that she’d feel right at home with the Injustice Society. Maybe they’re still recruiting?

RED BEE AND OTHER MID-NITE VISION

Dr. Mid-Nite’s goggles might as well be called “Easter egg vision,” because they gave us so many cool references. While showing Dr. McNider’s degrees, we see he went to college in Civic City and Keystone City, two famous DC Universe locations we’ve discussed in previous Easter egg segments. Remember the Courtney Johns Easter egg from the pilot? According to Mid-Nite Vision, Stargirl creator Geoff John’s sister is canonically Mary Kramer, Courtney’s best friend from the Stars and S.T.R.I.P.E. series. Beth also learned about the mob attack that blinded Dr. McNider, which can be seen in All-American Comics #25 (reprinted in Justice League of America #95). The goggles went REALLY OBSCURE by referencing the Red Bee, a Golden Age hero who trained bees to fight Nazis. If that doesn’t sound like the coolest f**king story engine, we don’t know what is. The Red Bee was originally published by Quality Comics before DC gained the rights to him in 1956. The original Red Bee was killed in All-Star Squadron #35, but his grandniece Jenna is currently continuing his legacy.

One of the most curious things that we learned from the goggles was that Doctor Mid-Nite was born in 1914, and joined the Justice Society in 1941. Since the pre-title sequence from the pilot took place in 2010, that means Doctor Mid-Nite would’ve been 96 years old during his final battle! In the comics there have been a few explanations for how the Justice Society slowed their aging, and it will be interesting to see how Stargirl addresses this. 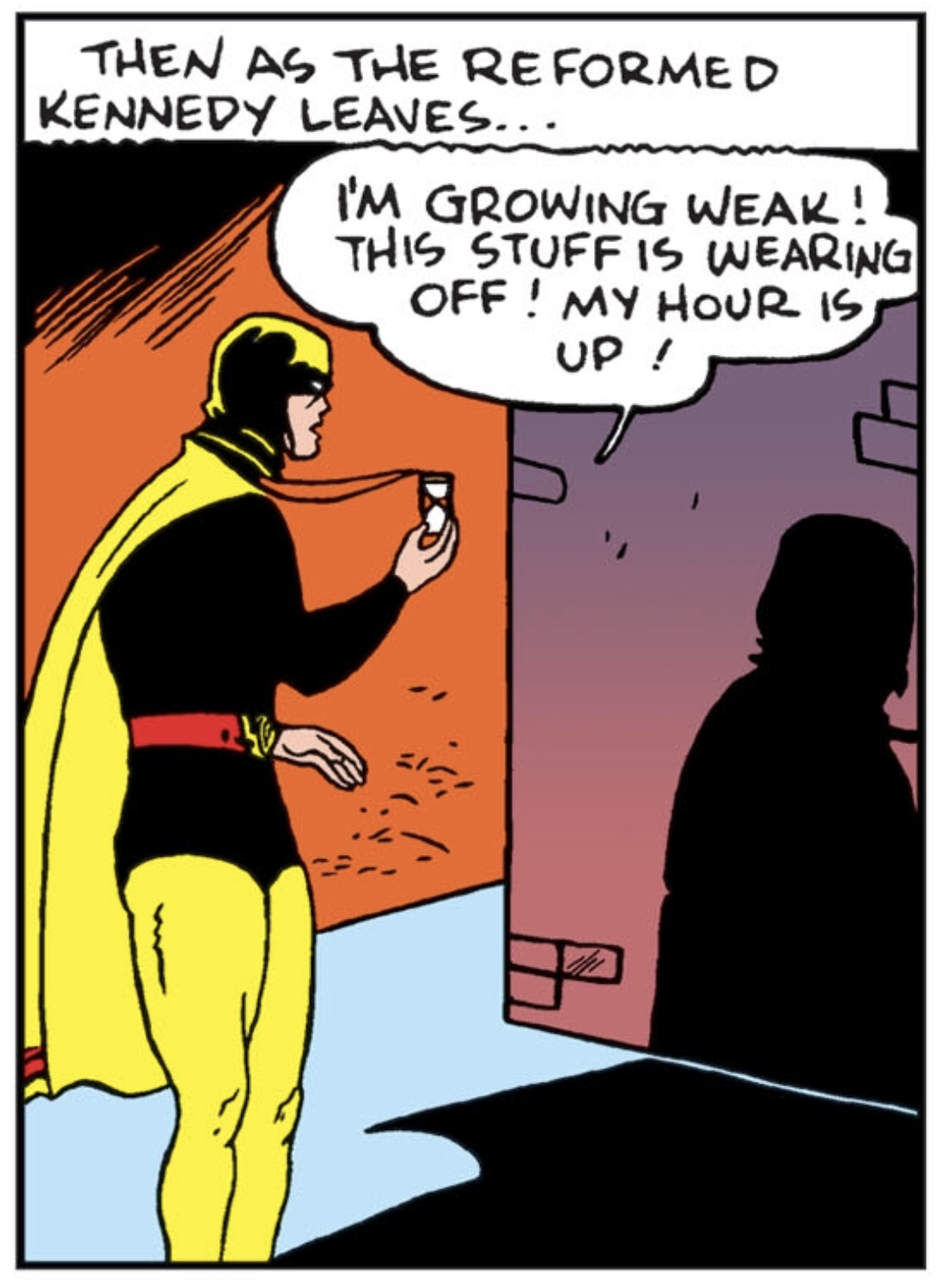 Although this episode doesn’t name it, the substance that gives Hourman his powers is known as Miraclo. The power-enhancing drug has come in many forms over the years, but it’s usually been seen as a pill. It was first mentioned in Adventure Comics #48 (reprinted in Justice League of America #96), Hourman’s first appearance. Although Miraclo can give you super-strength, the human body can only sustain it for an hour, which is how Rex Tyler got his superhero name. Tyler later modified the formula so that it would only work with his DNA, something that this episode alluded to. Now that Rick Tyler has his father’s Miraclo formula, will he use it responsibly? Keep your eyes tuned to Stargirl as this saga unfolds.

Did you catch any Easter eggs that we missed this week? Report your findings in our Community!