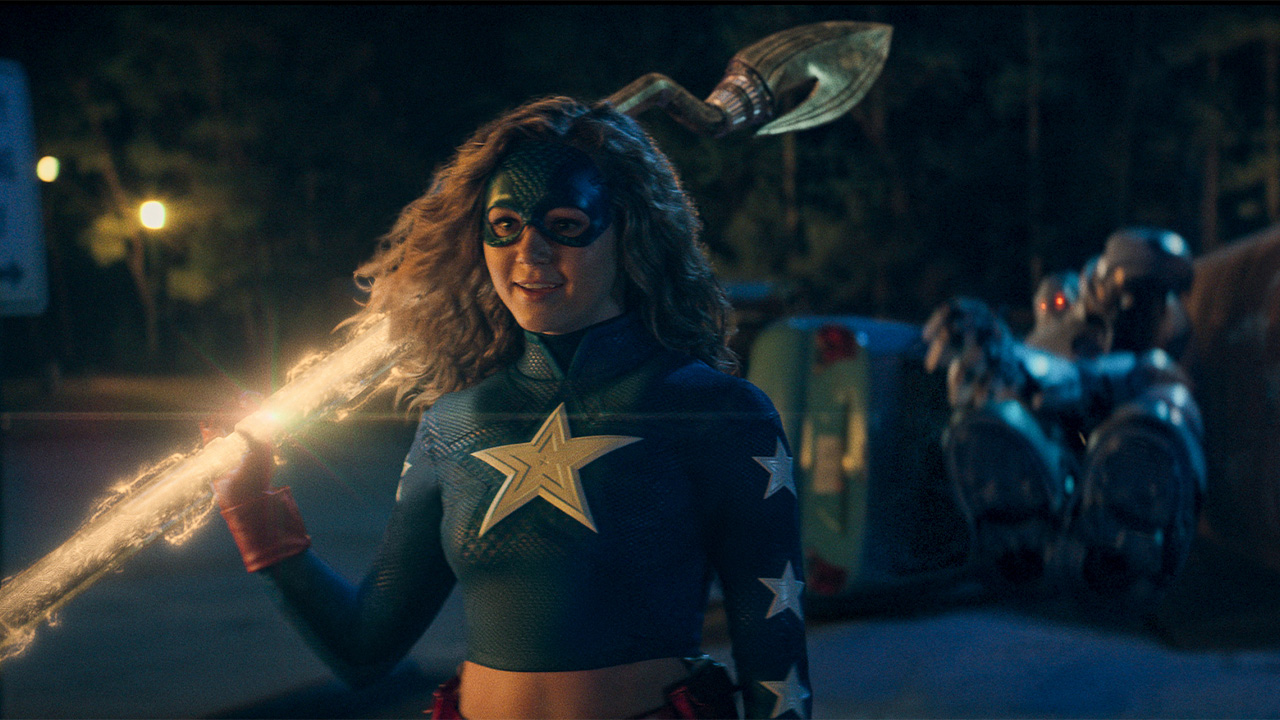 Did everyone catch the latest episode of DC Universe’s Stargirl? Courtney suited up for the first time, took on Brainwave, and saved Pat’s life! Not only was it an inspiring episode full of heroism, but it was also a love letter to DC’s grand history. Last week we broke down all the Easter eggs from Stargirl’s premiere episode, and today we’ll be looking at all the references we found in the episode “S.T.R.I.P.E.” 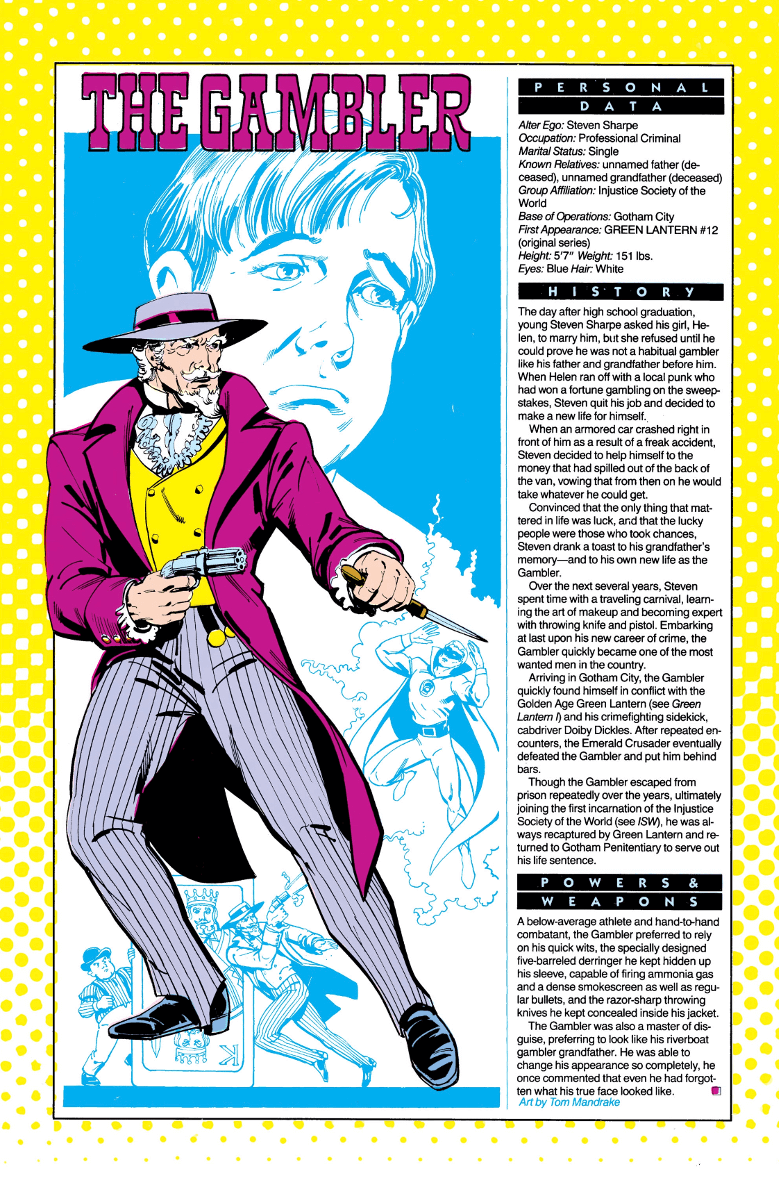 This week we met Steve Sharpe, CFO for the American Dream. Steve gave off super bad vibes as he shut down all of Barbara’s ideas, and the end of the episode revealed that he’s in league with the Injustice Society. In the comics, Steve was a villain known as the Gambler, who first appeared back in 1944’s Green Lantern #12. The Gambler was a classic Golden Age villain who used his carnival tricks to embark on a crime streak. In All-Star Comics #37 he became a founding member of the Injustice Society of the World, where he regularly fought the Justice Society. How does the American Dream and Blue Valley figure into his current plans? Time will tell… 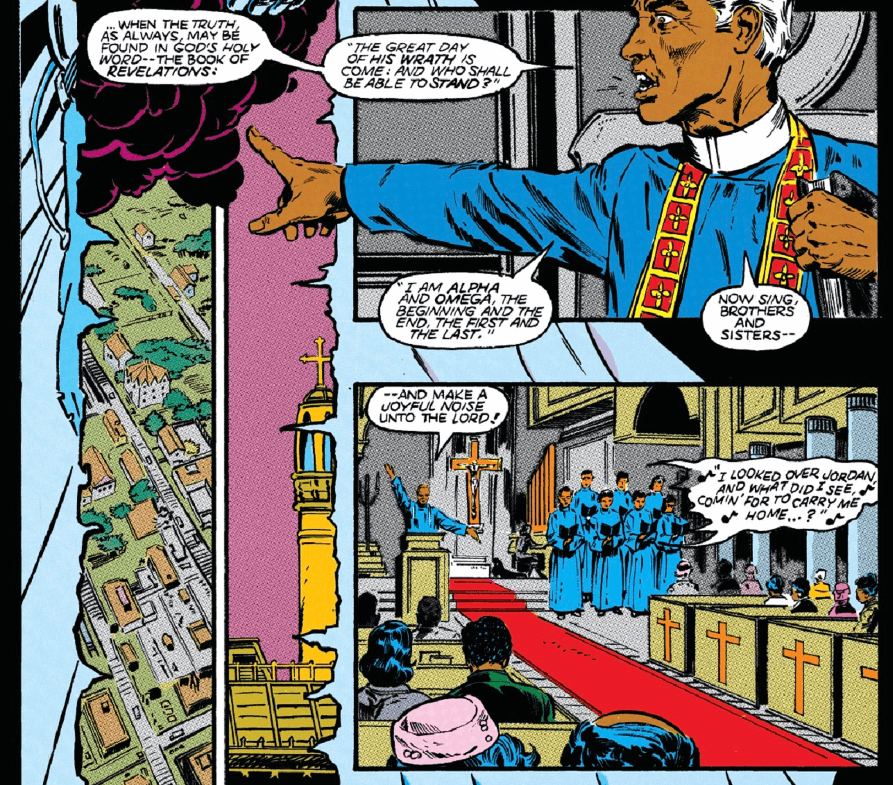 Not every adult in Blue Valley is a secret supervillain, and this week we were introduced to Beth Chapel’s parents Bridget and James. Bridget is a physician at Blue Valley Medical Center, while James works alongside Barbara Whitmore-Dugan at the American Dream. This is in contrast to Beth’s comic book parents, who were introduced in Infinity Inc. #21. In the comics, Beth’s father was a respected reverend, and her mother sang in the church choir. When Beth became Doctor Mid-nite, her mother helped her sew the costume.

Speaking of Beth’s mother, if you look above her computer monitor you’ll notice a diploma from Keystone University. This is a reference to Keystone City, which was introduced back in 1940’s Flash Comics #1. Keystone City is located in Kansas, and was the home to Jay Garrick, the original Flash. Speaking of Golden Age Flash stories… 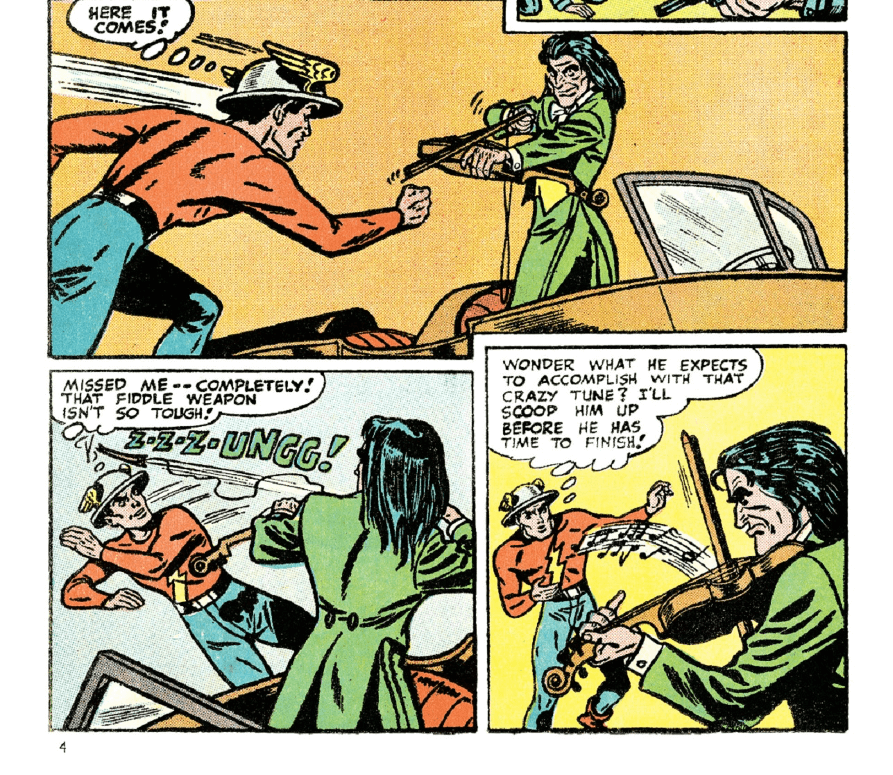 During Blue Valley High’s open house, Principal Bowin shows off her son Isaac, and brags about how he’s a musical prodigy. It’s a fitting description, since Isaac Bowin’s comic book counterpart is a villain known as the Fiddler. Jay Garrick first tangled with the Fiddler in 1948’s All-Flash #32 (reprinted in 1966’s Flash #160), and he was surprised to learn that the villain’s violin was able to produce deadly soundwaves, hypnotize helpless citizens, and tap into magical forces. Another cool note – Isaac’s haircut matches the hairstyle worn by his comic book counterpart. We love those little touches that help bring these comics to life. 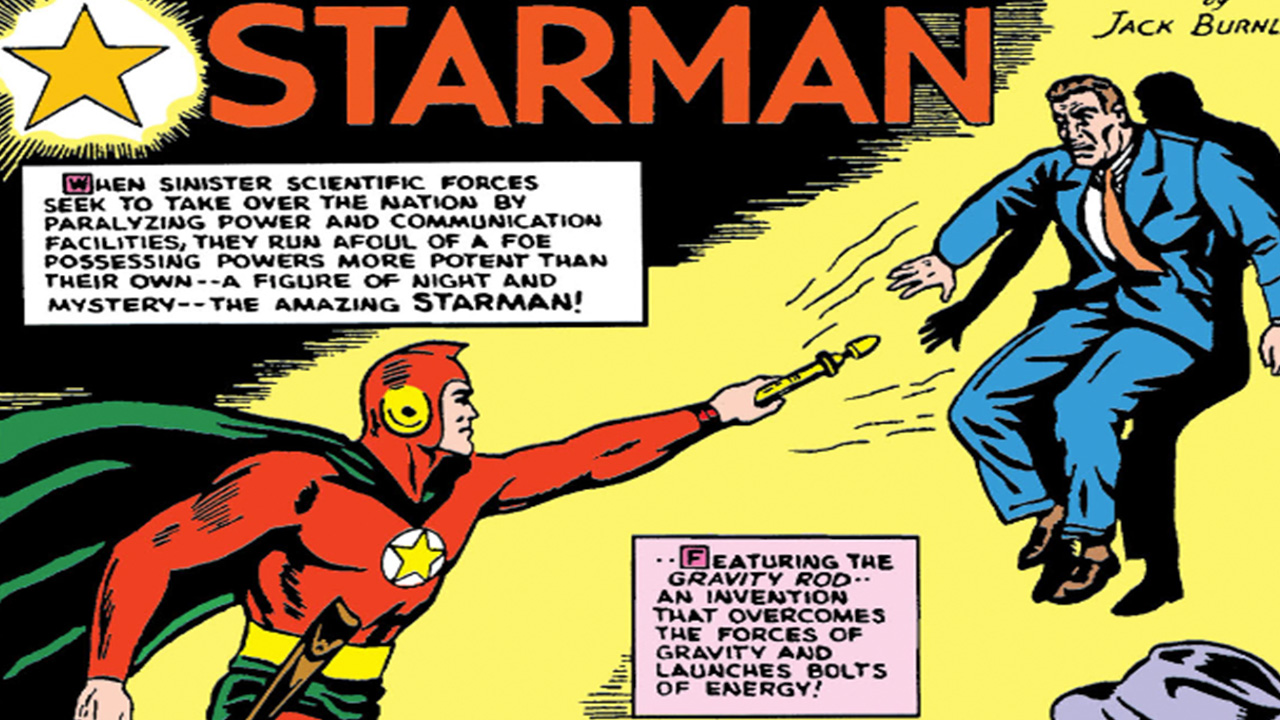 Last week we spoke about the origins of the Cosmic Staff, and in this episode we learned the name of the man who created it – Ted Knight. Although he shares a name with the narrator of the Aquaman cartoon, this version of Ted Knight is the original Starman. He first appeared in Adventure Comics #61 (reprinted in 1971’s Justice League of America #94), where he used his Gravity Rod to fight evil. After growing old and retiring, Ted passed the Starman mantle to his sons David and Jack. Ted was initially wary of Courtney, but he grew to respect her after she defeated the Nebula Man. To learn more about Ted Knight and his son Jack, check out James Robinson’s critically acclaimed Starman series. 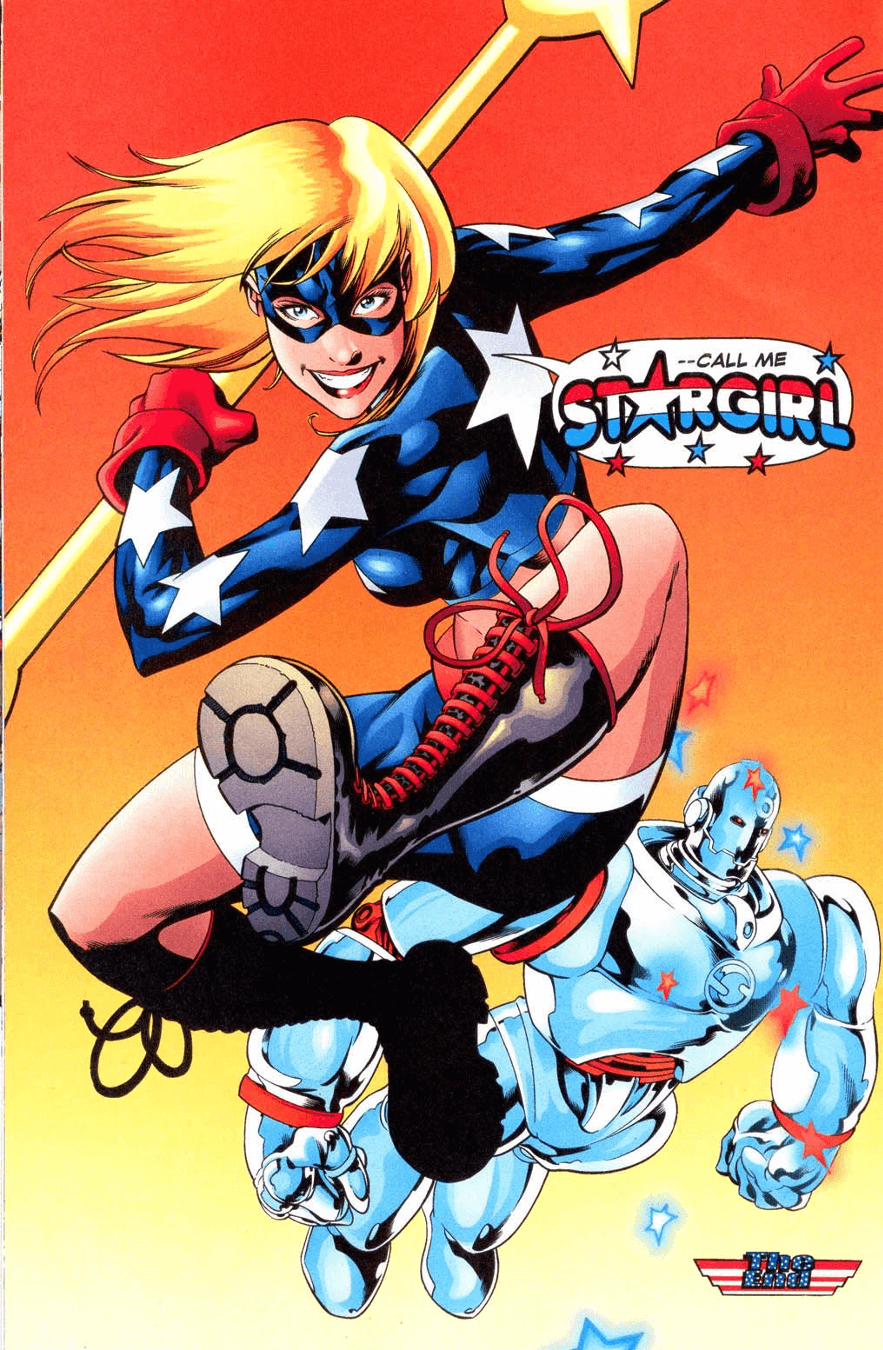 By the end of the episode Courtney and Pat got their own superhero names – S.T.R.I.P.E. and Stargirl! When Courtney first debuted in the comics (see 1999’s Stars and S.T.R.I.P.E.) she used the name Star-Spangled Kid. It was 4 years before Courtney decided to call herself Stargirl for the first time in 2003’s JSA: All Stars #4.

As for Pat’s name, in the comics S.T.R.I.P.E. actually stands for Special Tactics Robotic Integrated Power Enhancer. Most of those words are variations of the name Courtney came up with this week - Subatomic Tactical Robot Internet Pat Enhancer. Either way, it’s a much better name than Stripesy!

FROM PANEL TO SCREEN 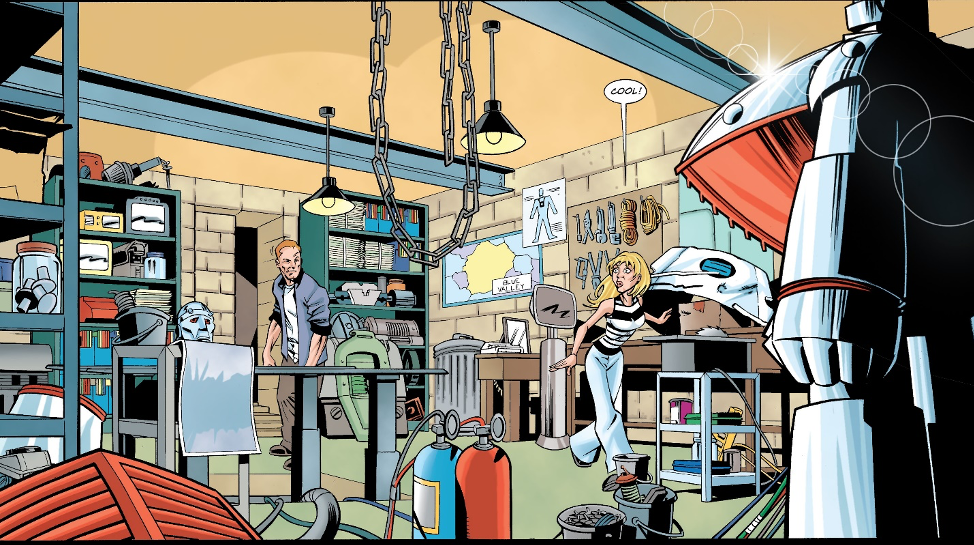