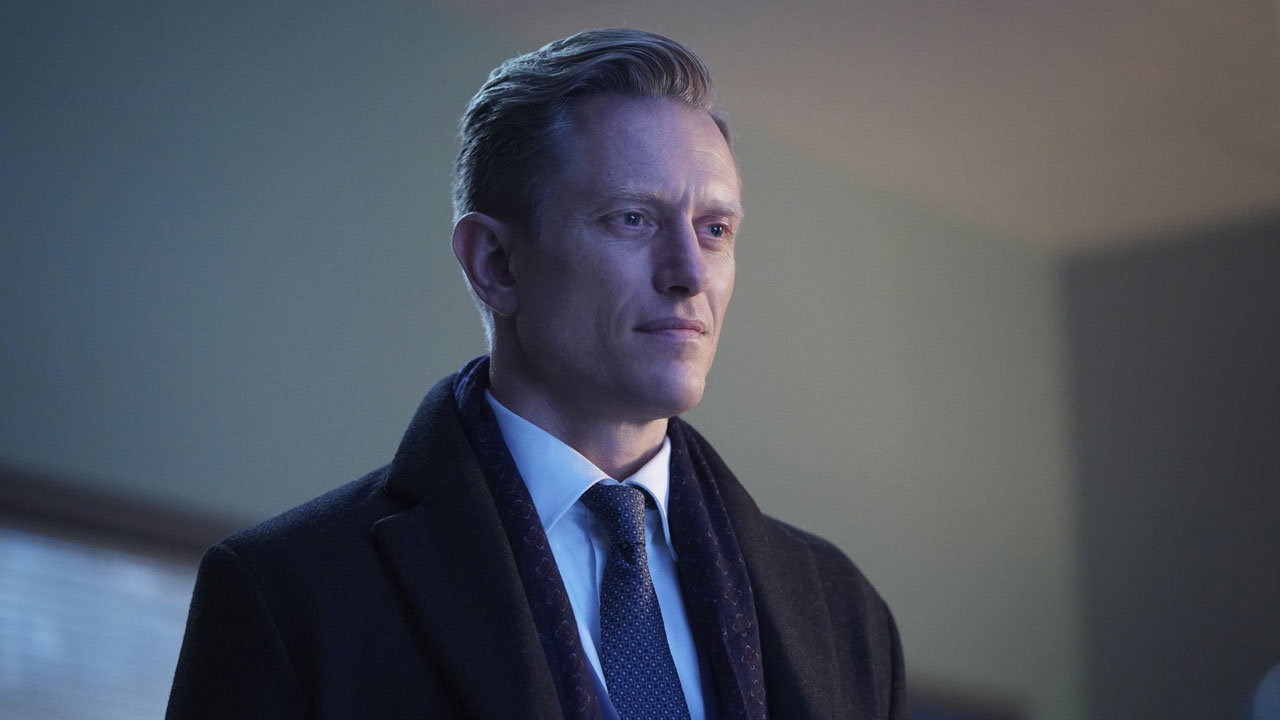 All the Easter Eggs in STARGIRL Episode 1-10: “Brainwave Jr”

The latest episode of DC Universe’s Stargirl left all of our jaws on the floor. Has everyone recovered from that ending yet? In addition to the high-stakes action and emotional drama, this episode had its fair share of deep-dive comic-book homages. Let’s take a look at the Easter eggs we found in “Brainwave Jr.” 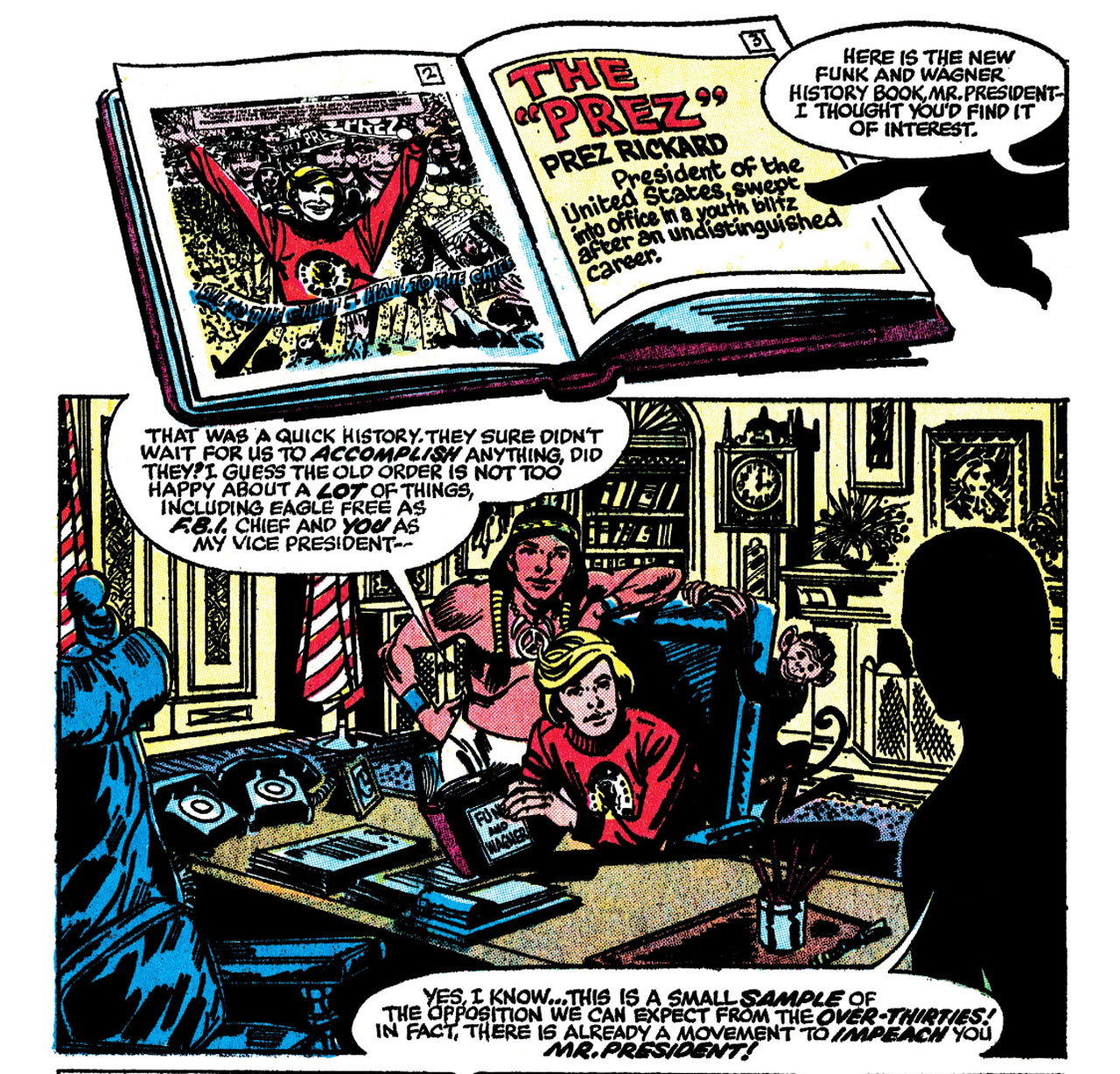 If you’ve been following this column every week, then you know that the movie theater in downtown Blue Valley is a treasure trove of Easter eggs. This week the theater was playing Strange Adventures, The Unknown Soldier, Prez, and G.I. Robot. If these titles sound familiar, it’s because this was the same lineup in episode 6. According to Stargirl graphic designer Shawn McBee, the posters were designed for episode 10, but were used for episode 6 because an establishing shot was needed. So if you didn’t get a good look at the posters in episode 6, check out the opening scene this week for a closer view! For more on the comics that inspired these posters, check out our Easter egg column for episode 6 “Justice Society.” 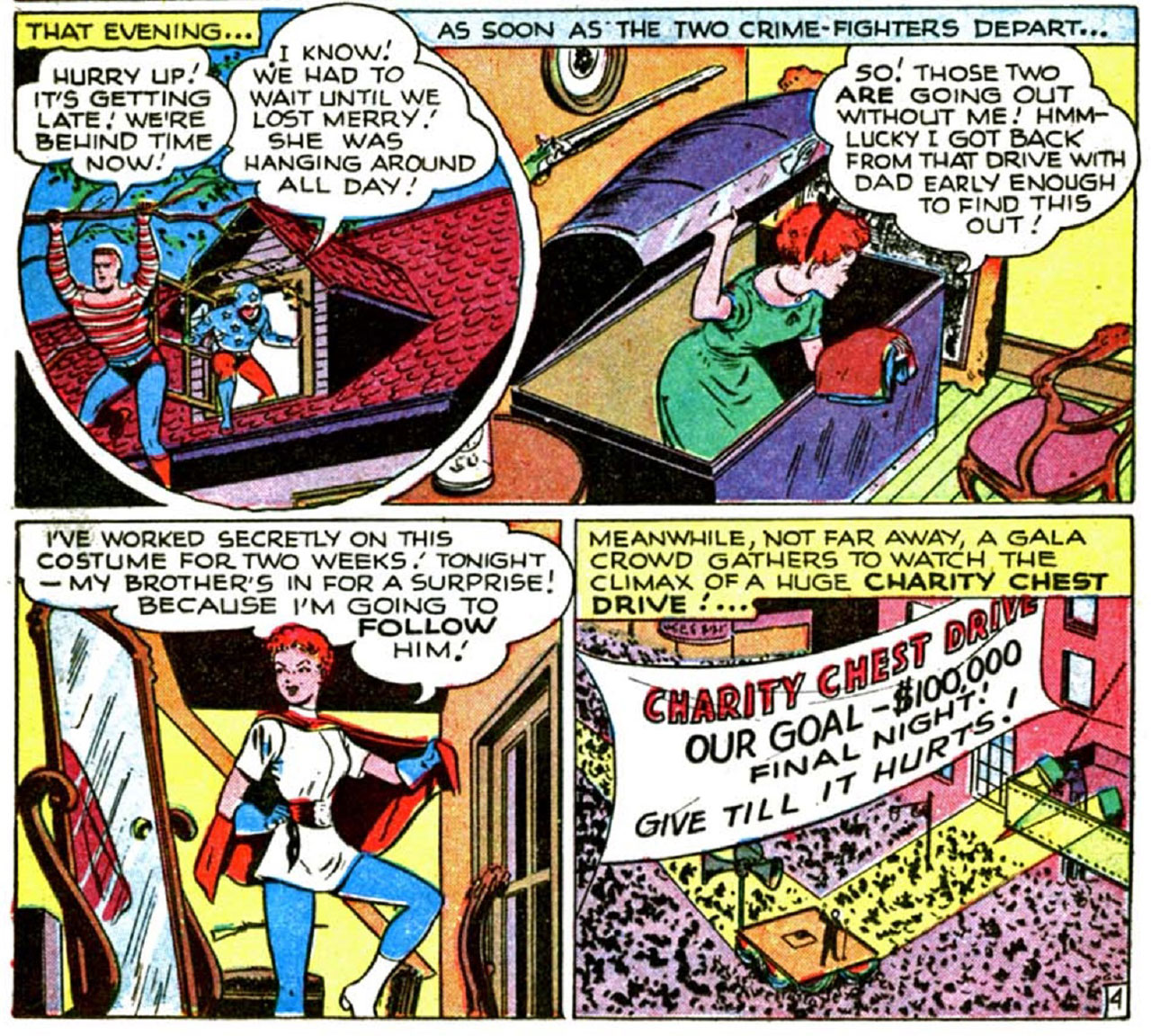 While looking through his father’s videos, Henry learned that his mother Merry was once a heroine who went by the name Girl of 1,000 Gimmicks, and that she was Starman’s sister. Merry first appeared as the Star-Spangled Kid’s pesky kid sister in Star-Spangled Comics #81. After returning home from crime-fighting, Sylvester’s parents were shocked to see him all bruised up. Horrified, Mr. and Mrs. Pemberton took their son to a therapist, who concluded that Sylvester was lonely and needed a playmate. The therapist recommended they adopt a younger sister for him, which was a disproportionate way to solve the problem.

In Infinity Inc. #3, Brainwave Jr. reveals that Merry was his mother, who had married the original Brainwave during an unspecified time period. It’s unclear how their courtship happened, and at various times Henry suggested his mother died of a broken heart when Brainwave returned to crime. Despite this, Merry showed up alive and well in 1999’s Young Justice #16, informing Red Tornado that the reports of her death were exaggerated. Although she’s a senior citizen now, Merry continues to fight crime as Gimmick Girl, and even has her own team, appropriately named Old Justice. 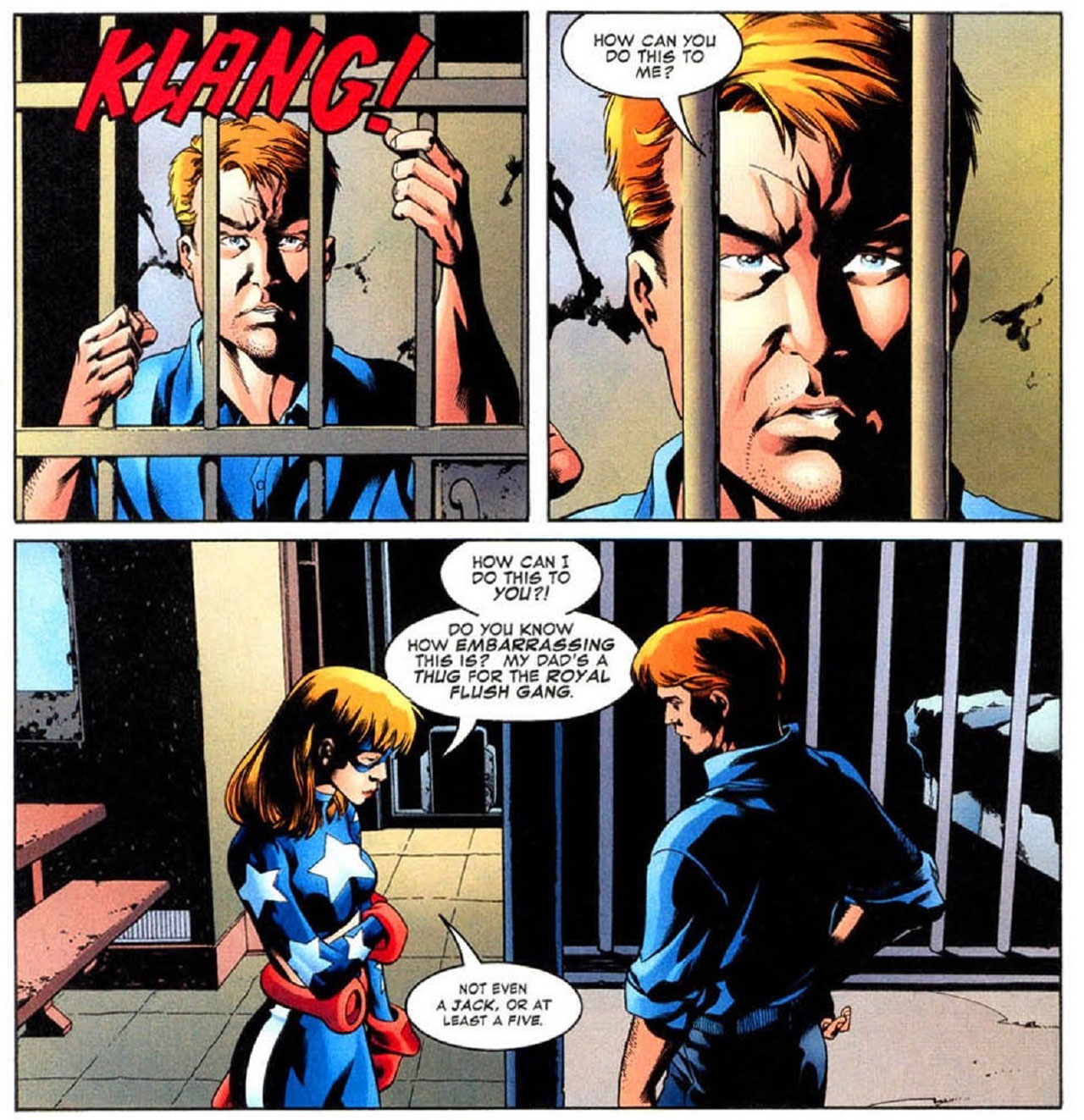 Warnin: skip this section if you want to avoid any potential spoilers about Courtney’s father... While it’s hard to say if Stargirl will follow the path she followed in the comic books, we don’t want to give away any potential plot twists. Still here? Okay... There’s a subliminal Easter egg in Barbara’s email that might foreshadow Sam Kurtis’s comic book career. While Barbara is writing to Sam, an e-mail can be seen from a user named "The RoyalFC" asking if anyone has a two of spades. This is a reference to the Royal Flush Gang, and Sam’s ranking within the group. The Royal Flush Gang is a team of card-themed criminals who first appeared in 1966’s Justice League of America #43. In 2003’s JSA: All Stars #4, Courtney learned her father had joined the gang, and was given the title of Two of Clubs. While it remains to be seen if DC Universe’s Stargirl will give Sam the same fate, we at least got a cool homage in Barbara’s inbox.

HAIL TO THE CHIEF 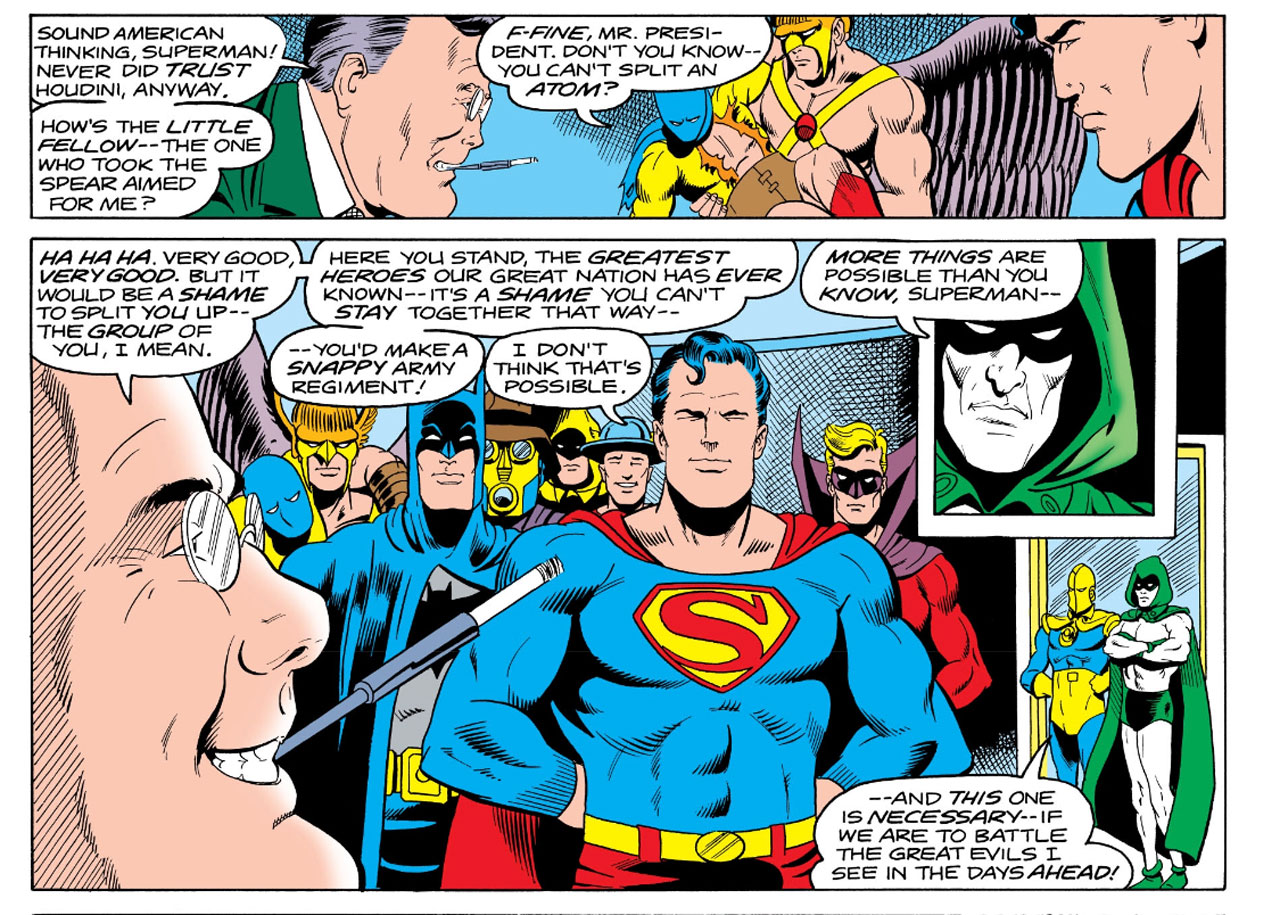 While Barbara is researching Starman, a news headline can be seen on her computer screen: “JSA Set to Meet President.” This is a reference to the JSA’s close relationship with President Franklin Roosevelt. In fact, DC Special #29 revealed that Roosevelt was responsible for the formation of the Justice Society. Hitler had acquired the mythical Spear of Destiny, and the President responded by assembling a group of superheroes to push back against the Axis forces. The Justice Society continued to enjoy a close working relationship with the President for the remainder of his term. Unfortunately, later government officials weren’t as kind to the JSA. But that’s a story for another time. 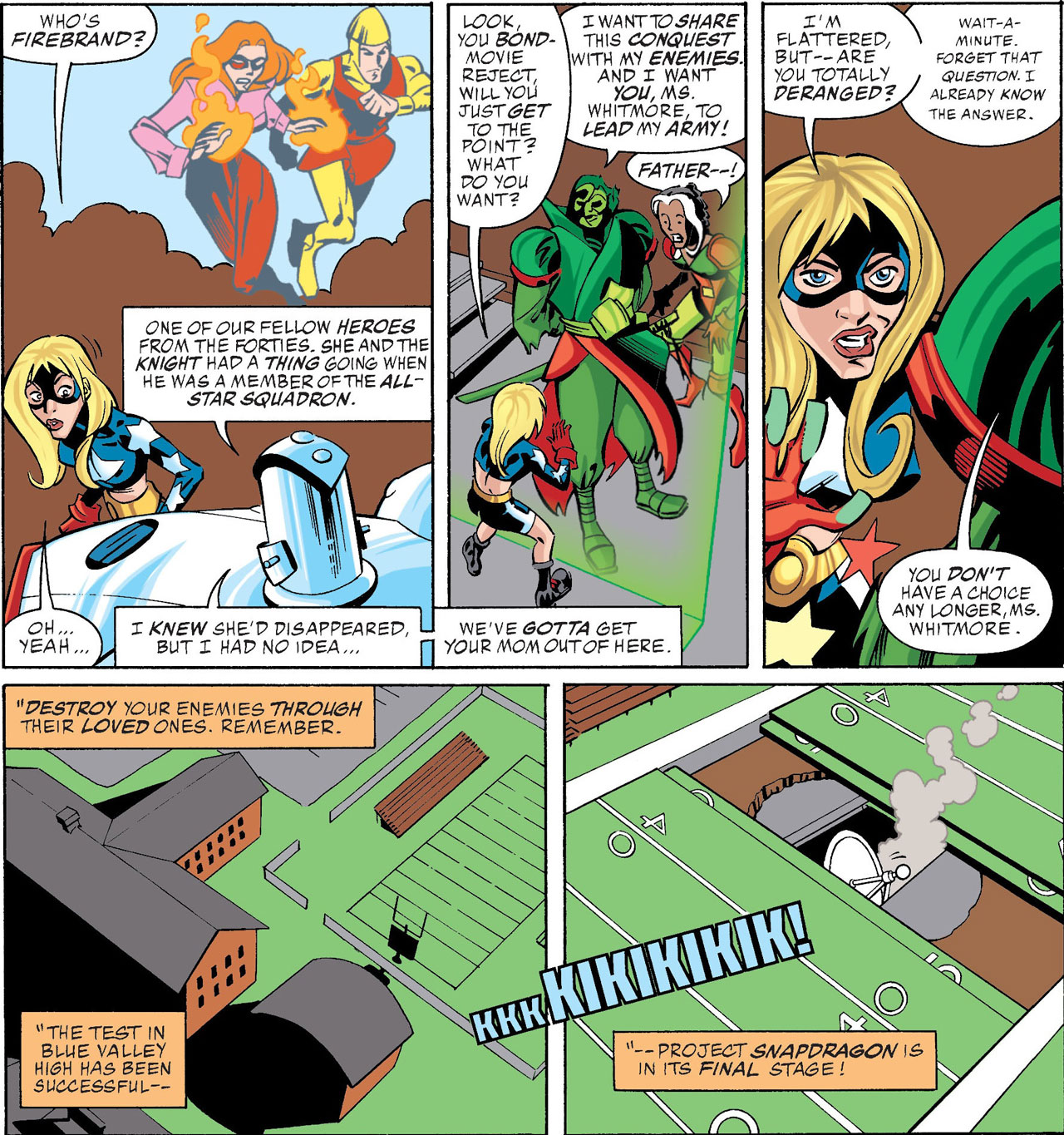 During her battle with Dragon King, Stargirl mistakenly calls the villain Snapdragon. Although Courtney didn’t get the name right, Snapdragon is a reference to Dragon King’s masterplan in Stars and S.T.R.I.P.E. #11-13. Dragon King was obsessed with making the entire world into mindless drones, and Operation Snapdragon would’ve brought his dream to fruition. Using a series of satellites Dragon King would’ve brainwashed the entire world, but thankfully he was stopped by the Star-Spangled Kid, S.T.R.I.P.E., and the Shining Knight.

THE FALL OF BRAINWAVE 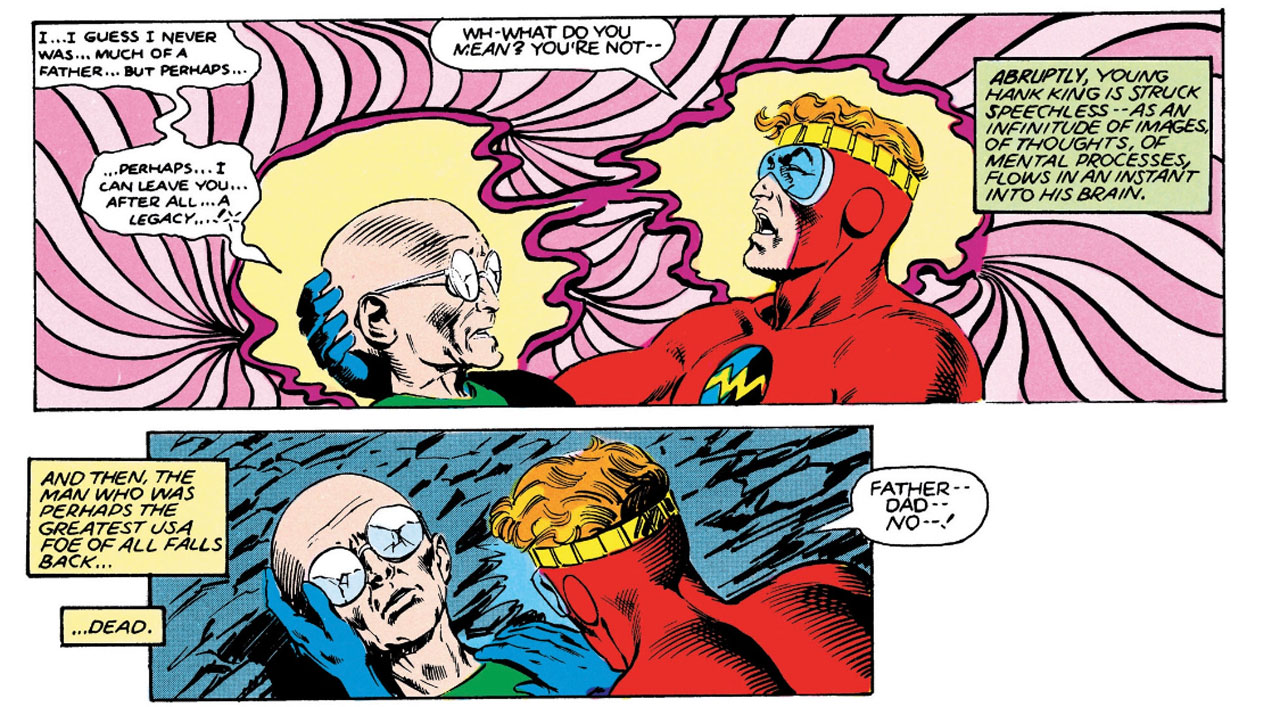 We know what you’re all thinking, and it’s not because we have Henry’s telepathic powers. We’re torn up about Henry’s heroic sacrifice, and we wish Brainwave had been a better father. For an alternate take on the fate of Henry, check out Infinity Inc #10. While Brainwave’s live-action counterpart couldn’t be swayed to the side of justice, his comic-book counterpart was able to redeem himself by joining forces with his son and the Star-Spangled Kid to fight another psychic known as the Ultra-Humanite. When the Ultra-Humanite targeted Henry, Brainwave sacrificed himself to save his son, dying as a hero. 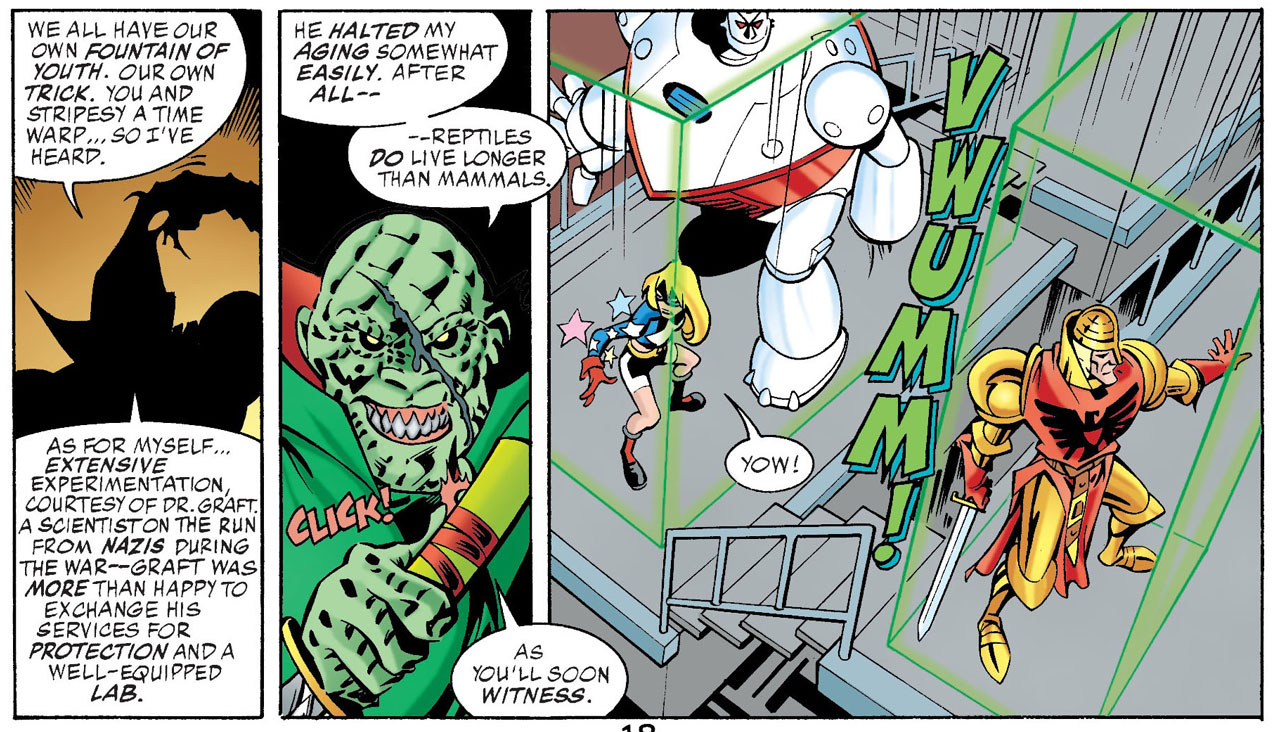