After a mind-bending adventure involving a giant cockroach copulating with a rat on a genderqueer sentient street trapped in a painting, the first season of DC’s Universe’s Doom Patrol has come to a close. The season finale “Ezekiel Patrol” answered the questions that needed answering while cleverly utilizing some Easter eggs from the Doom Patrol comic library. Here are the highlights… 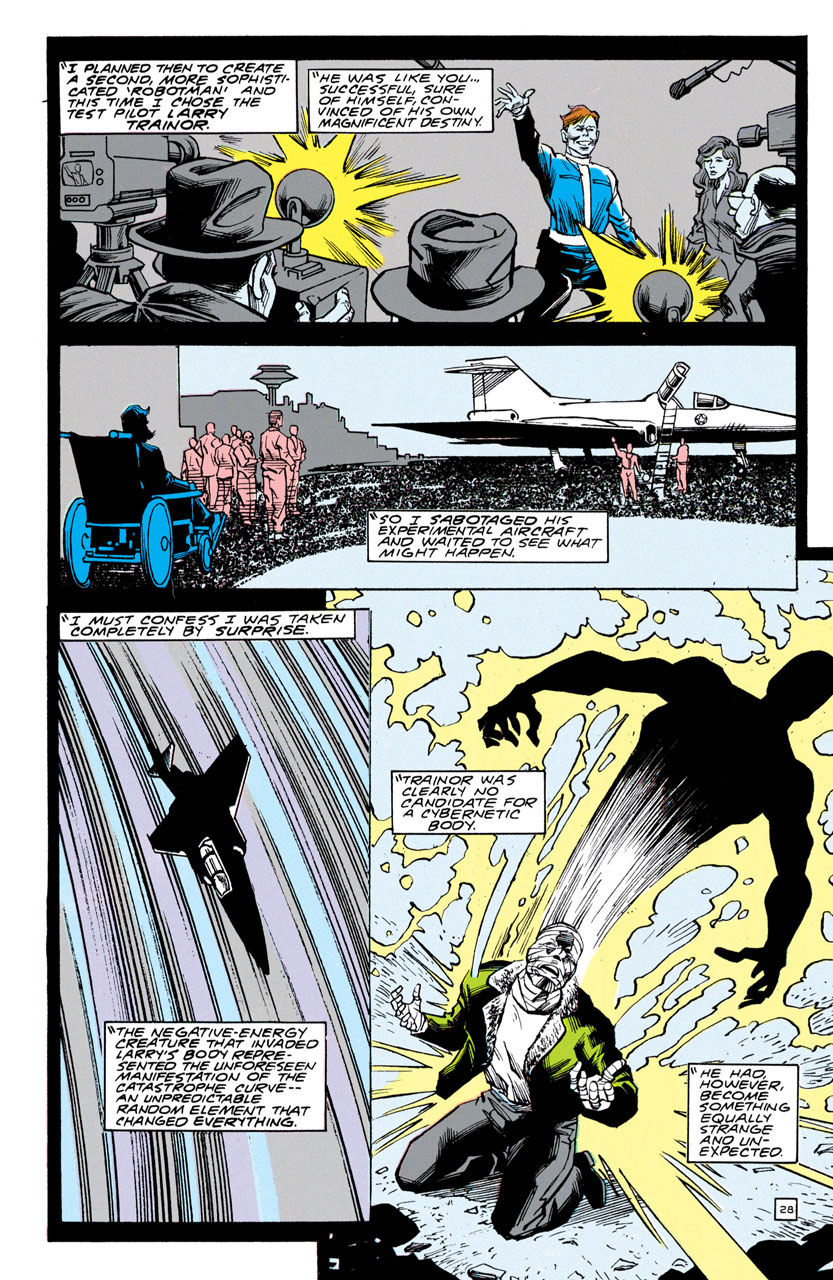 The Chief finally came clean and revealed that he was responsible for the origins that turned his team into freaks. Jane’s injections, Rita’s on-set accident, Larry’s crash and Cliff’s auto-wreck – the Chief engineered them all. We previously speculated on this possibility in our Easter eggs column for the pilot, and now we know it’s true. The idea comes from a story concept in Doom Patrol (1987) #57 (written by Grant Morrison and penciled by Richard Case) where Niles confessed everything to a paralyzed Robotman. Niles had been looking for test subjects, and had chosen Larry, Rita and Cliff because he thought they were conceited people who could use “improvements”. In the comics Jane’s origin came from different circumstances (which we detailed here) but that didn’t stop Niles from finding other ways to manipulate her destiny. At least the Chief’s television counterpart expressed some remorse… 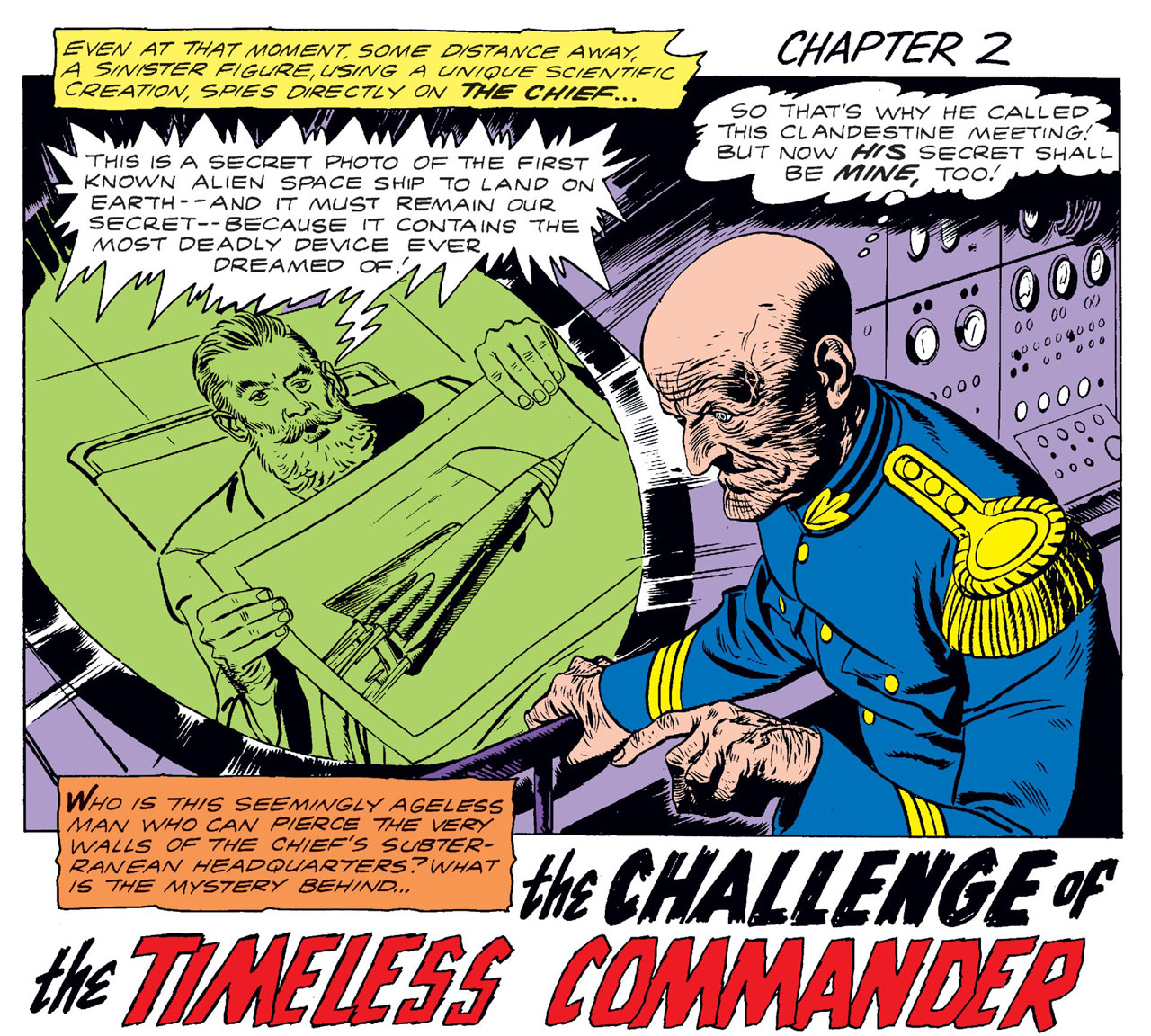 As Niles backstory was explored, we saw a flashback of him and Josh Clay at the Ant Farm. As they’re discussing Niles experiments on the future Doom Patrol, the name “Project Immortus” is referenced. That name is a nod to General Immortus, the first foe the Doom Patrol ever faced. General Immortus first appeared alongside the Doom Patrol in My Greatest Adventure #80 (written by Bob Haney and Arnold Drake, penciled by Bruno Premiani), and was constantly battling with Niles for the secrets of immortality. As you might be able to tell by his picture, Immortus is an aged man and he’s used various techniques to prolong his life. Niles first met Immortus when he was hired to help him recreate his immortality formula, but the Chief backed off when he realized the General was a bad dude. They’ve been sworn enemies ever since. 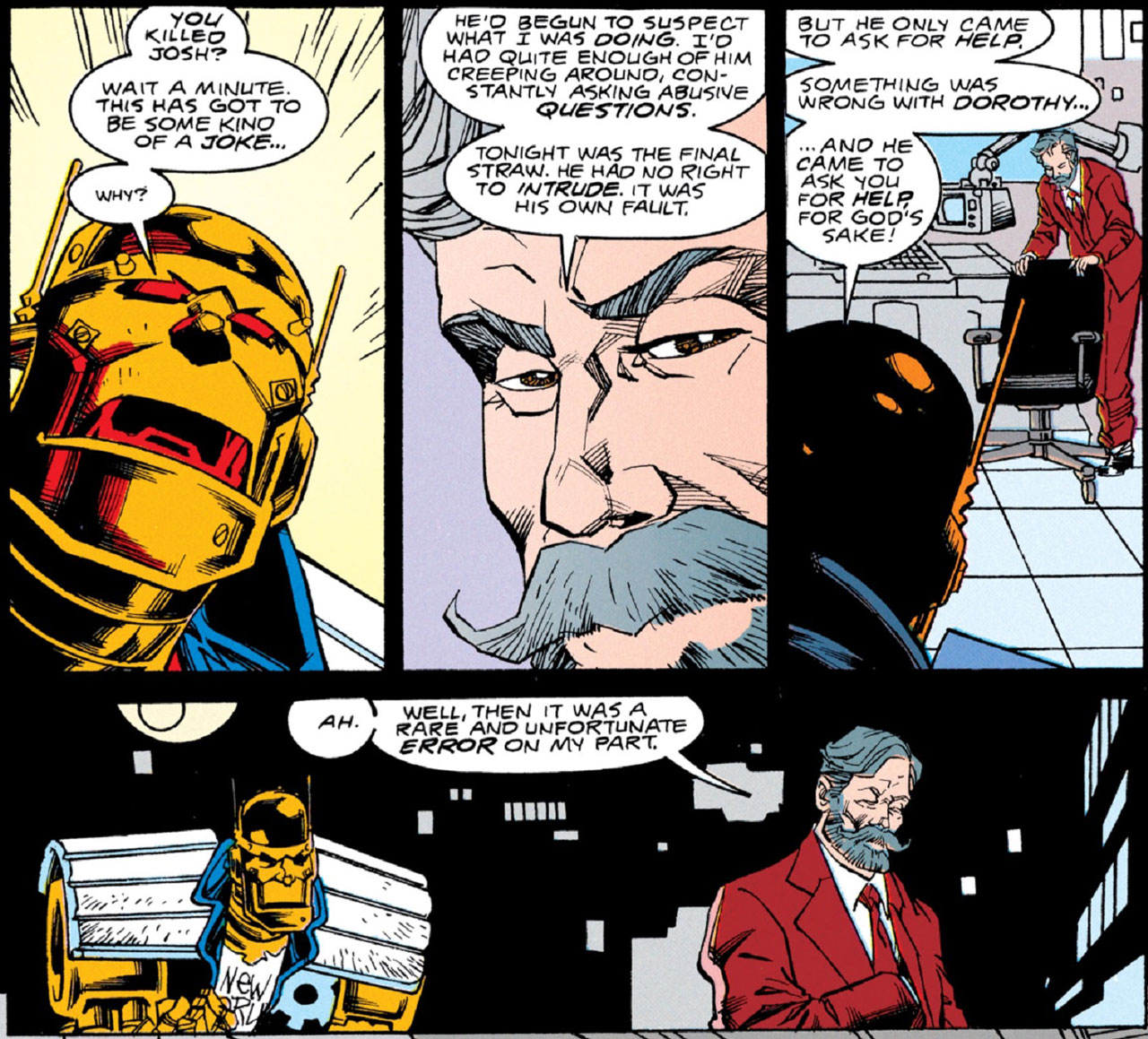 Another interesting thing about the Chief’s conversation with Josh was the antagonism between them. Josh didn’t find the Chief’s human experimentations ethical and was trying to get Niles to back off. This alludes to their relationship during the Grant Morrison run, where Josh was one of the few people who could see through the Chief’s duplicitous nature. Niles was secretly experimenting with genetic weapons and feared Josh was catching on to him. Everything came to a head in Doom Patrol (1987) #56 (written by Grant Morrison and penciled by Richard Case) when Niles fatally shot Josh, and action he shrugged off as an “unfortunate error” in Doom Patrol (1987) #57. With a friend like the Chief, the Doom Patrol doesn’t need any enemies.

The Painting that Ate Danny 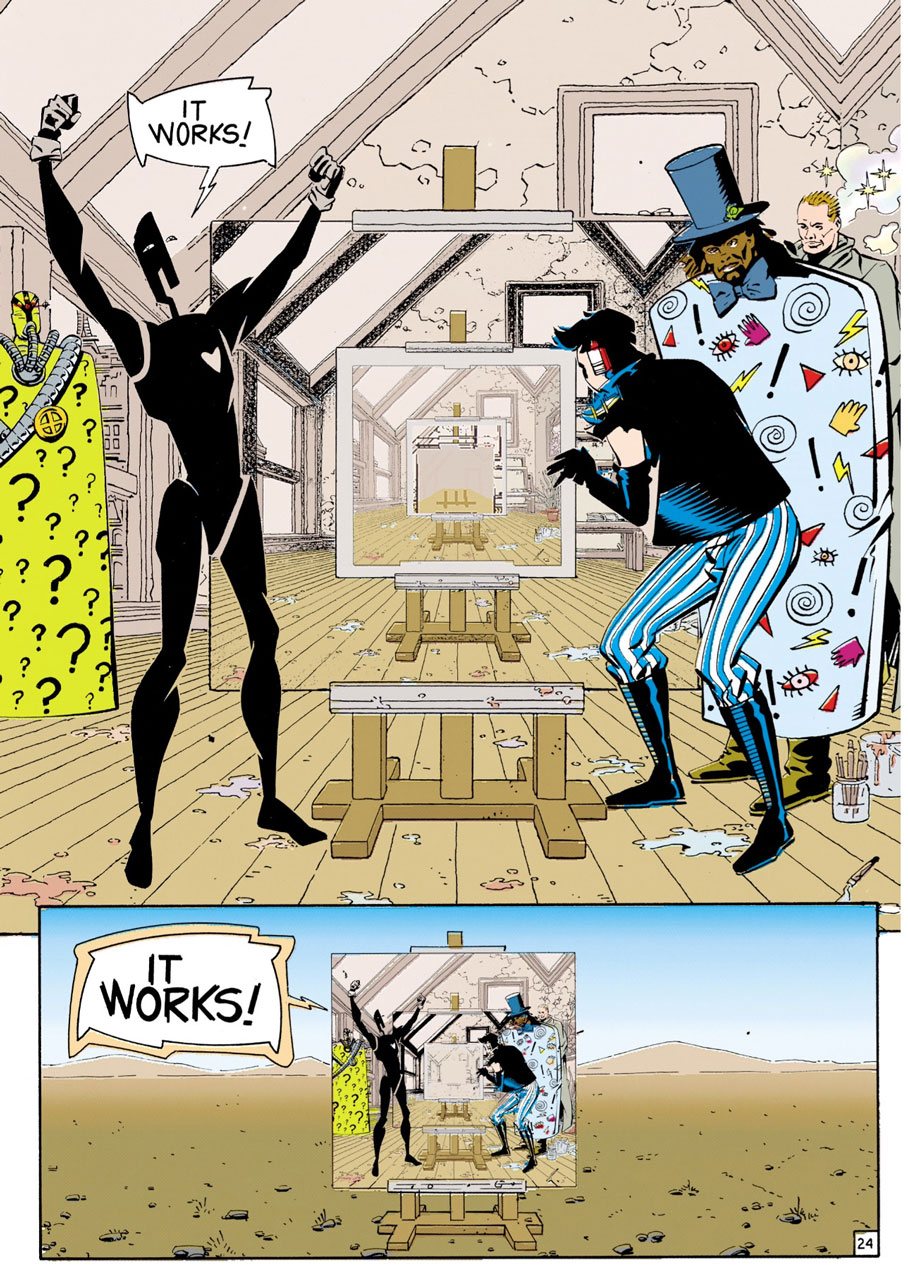 We’ve witnessed Mr. Nobody do some pretty crazy thing this season, and this week he performed another improbable feat by capturing Danny inside a painting. This ability should come as no surprise for comic readers, since he once trapped an entire city inside a painting. In Doom Patrol (1987) #27 (written by Grant Morrison and penciled by Richard Case) Mr. Nobody and his Brotherhood of the Dada baffled the Justice League by sucking the city of Paris inside a painting. The Doom Patrol were able to retrieve Paris safely, but nobody ever forgot what he was able to do with an empty canvas. This explains why Danny was so reluctant to face Mr. Nobody earlier in the season. 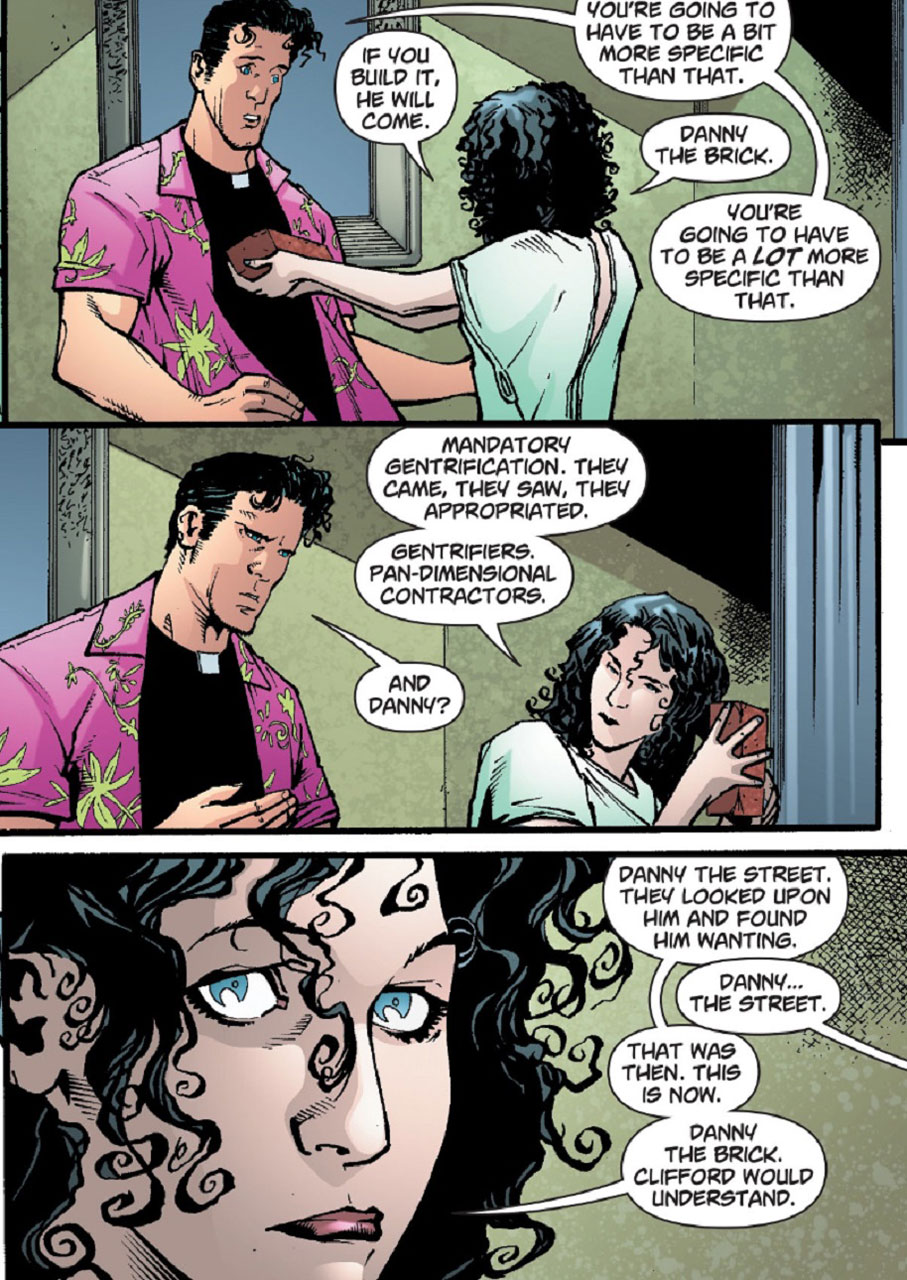 Fans of Danny the Street will be pleased to see he survived Larry’s radiation blast. While he lost a lot of his festive infrastructure, he was able to survive as a single brick. Danny suffered a similar fate in the comics during Keith Giffen’s Doom Patrol run. After being completely leveled, Danny was reduced to a solitary brick which Jane found. Jane revealed Danny’s new status in Doom Patrol (2009) #8 (written by Keith Giffen, penciled by Ron Randall and Matthew Clark) and made sure her friend was kept from harm. Danny eventually found a new home on OoLong Island where he grew into Danny the Bungalow. Say what you will about Danny, but he sure is malleable. 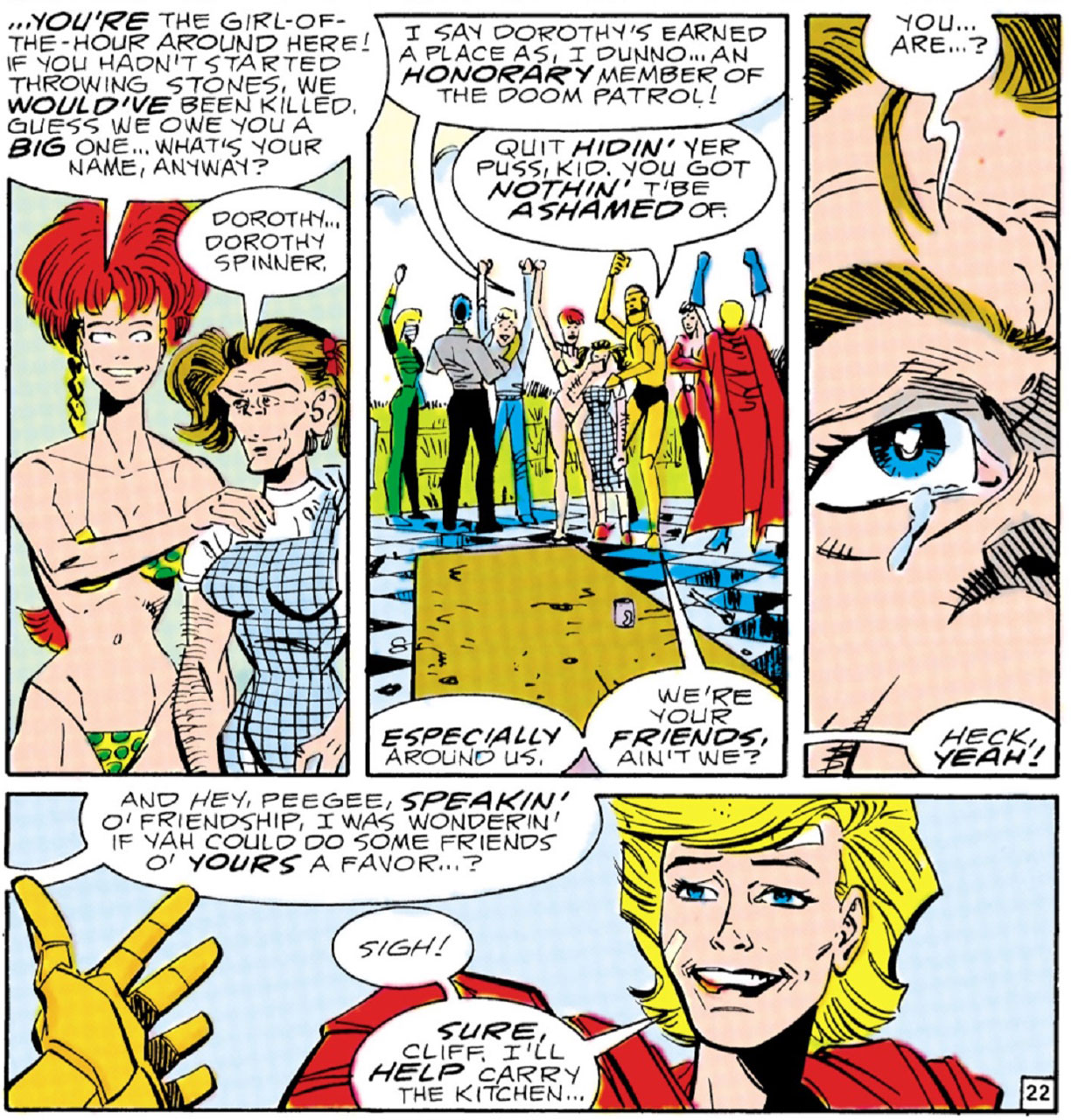 The origin of the Doom Patrol wasn’t the only secret Niles revealed this week. Viewers also learned that he had a daughter named Dorothy. Fans have been speculating about Dorothy since Niles flashbacks during “Hair Patrol”, and it appears those theories have been confirmed. While we didn’t get to officially meet Dorothy, we partially saw her from behind. Her hair and clothing appear to be a direct translation of her comic book counterpart who was first seen in Doom Patrol (1987) #14 (written by Paul Kupperberg and penciled by Erik Larsen). In the comics Dorothy and the Chief aren’t related, but she was a young girl who became a member of the Doom Patrol. Dorothy had the power to conjure her imaginary friends to life, although she wasn’t always able to control it.

HONORABLE MENTION: Did you catch Rita and Larry’s neighbor? “Old man Arnold” was a tribute to Arnold Drake, the DC Comics writer who helped create the Doom Patrol and penned many of their early adventures.

That’s it for Doom Patrol’s first season of Easter eggs! Now, break out your bug spray, because next week we’ll be taking a trip to the swamp -- with the series premiere of DC Universe's Swamp Thing on Friday, May 31st...