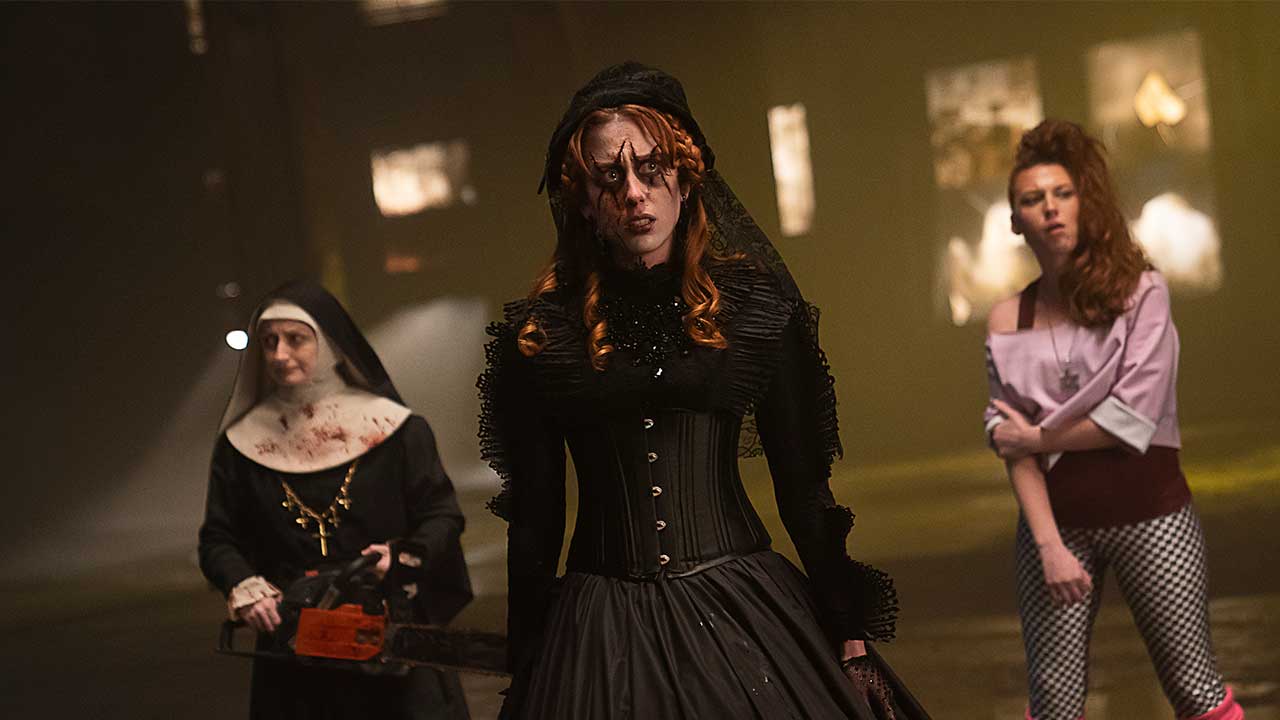 All the Easter Eggs in DOOM PATROL Episode 9: “Jane Patrol”

Things got more than a bit scary in this week's episode of DC Universe's Doom Patrol,  “Jane Patrol,” as Cliff took a trip though Crazy Jane's Underground. Along the way we met some of Jane’s creepier personalities and got to see many scenes from 1990’s classic Doom Patrol #30 (written by Grant Morrison and penciled by Richard Case) come to life. How did the story translate from panel to screen? Let’s take a look...

Memories of a Monster 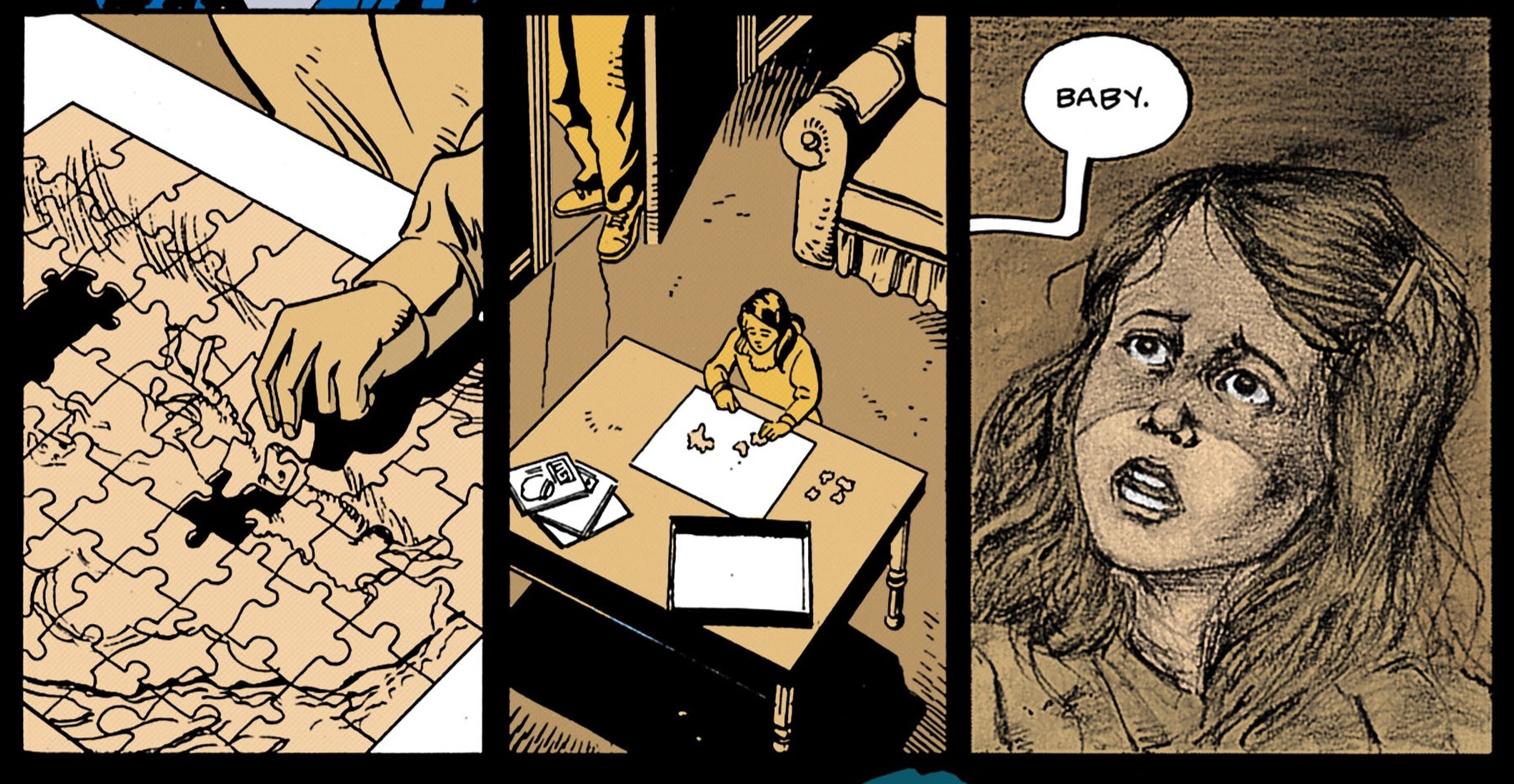 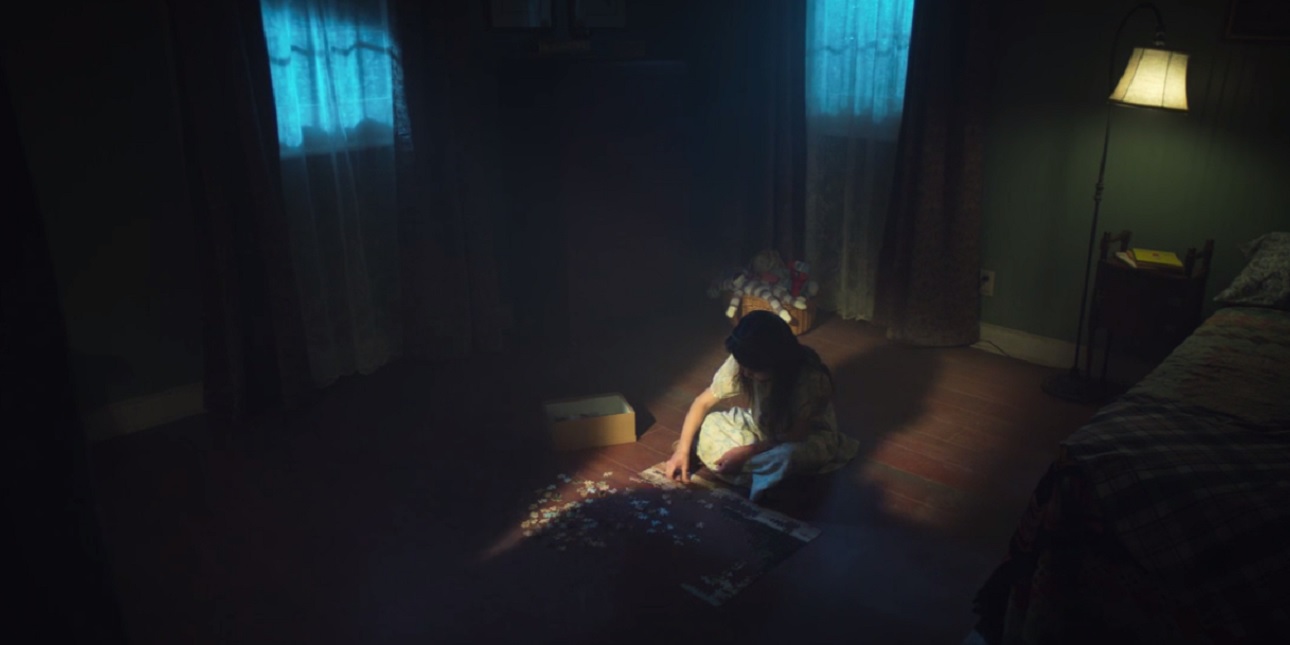 "Jane Patrol" begins with a flashback to a horrific encounter Kay Challis had with her father. We got our first clue about “Daddy” when Steve Dayton pulled a mental attack on Jane in “Doom Patrol Patrol,” and now we learn more about the relationship. The flashback to Kay finishing her puzzle was a pivotal memory that Doom Patrol readers finally got to see adapted in live-action. 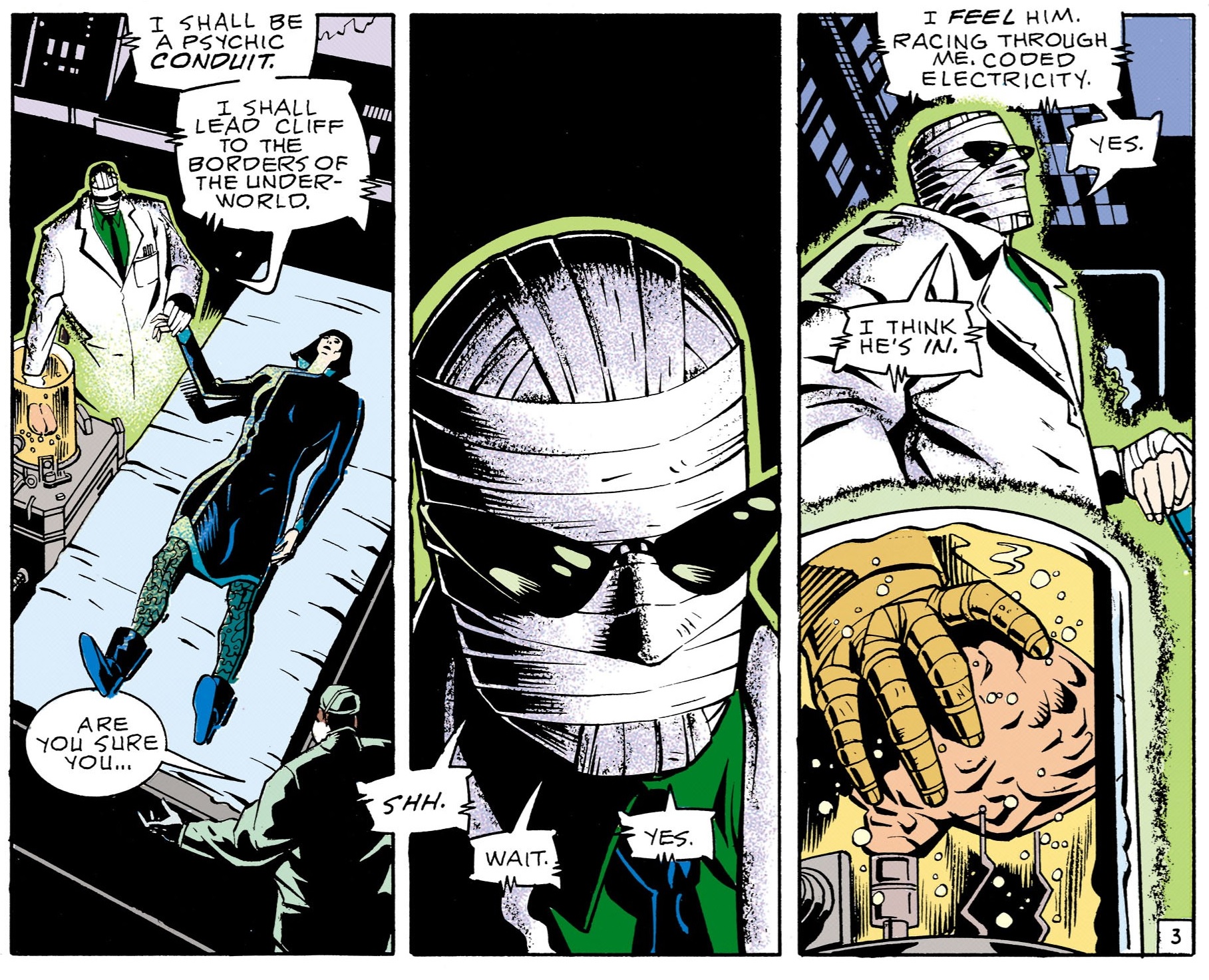 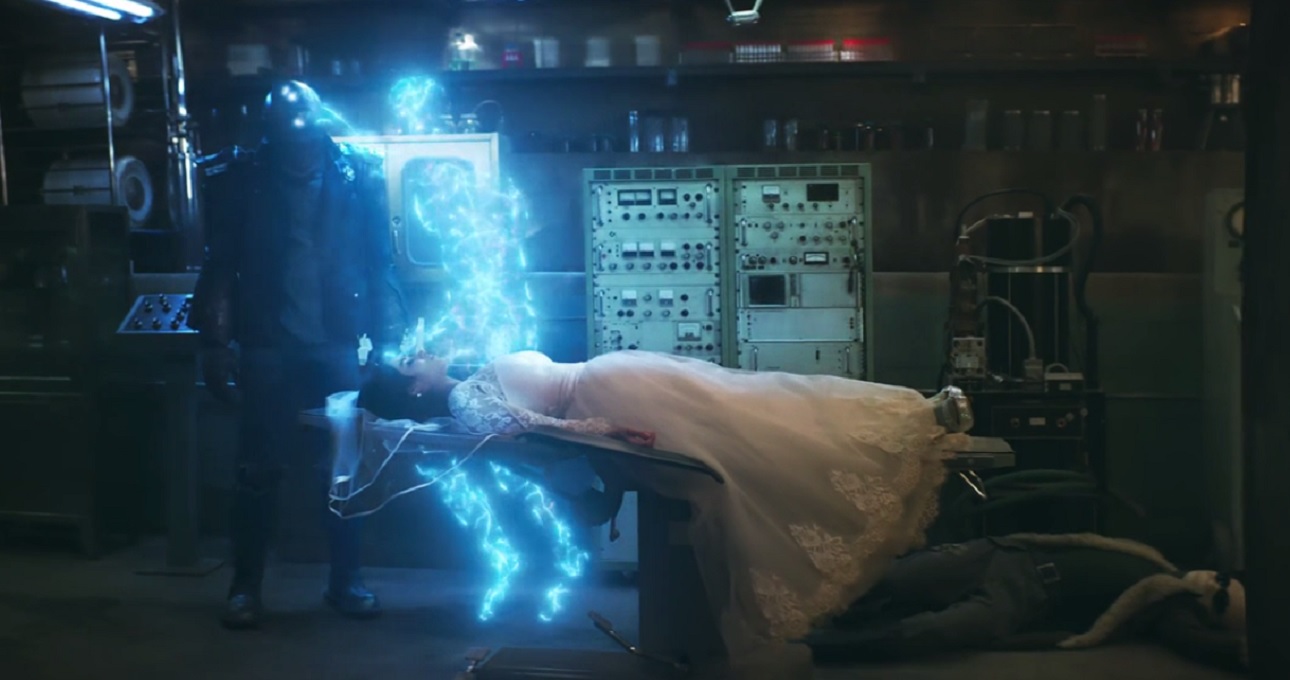 To save Jane, the Negative Spirit acts as a conduit between her brain and Cliff’s. The comics had a similar set-up, but the circumstances were slightly altered. Jane was comatose because her battle with the Fifth Horseman (as seen in 1990’s Doom Patrol #29) had damaged the Underground. The Chief wasn’t kidnapped at that time, so he helped with the experiment. The Negative Spirit didn’t have to separate from his host body because at the time Larry and he were part of a union with a doctor named Eleanor Poole, forming a mystical third entity called Rebis. Cliff had to leave his body for the procedure, and his brain was put in a jar. Cliff also maintained his robot form while traveling through the Underground. But since it’s always good to see actor Brendan Fraser, we'll call this a change for the better. 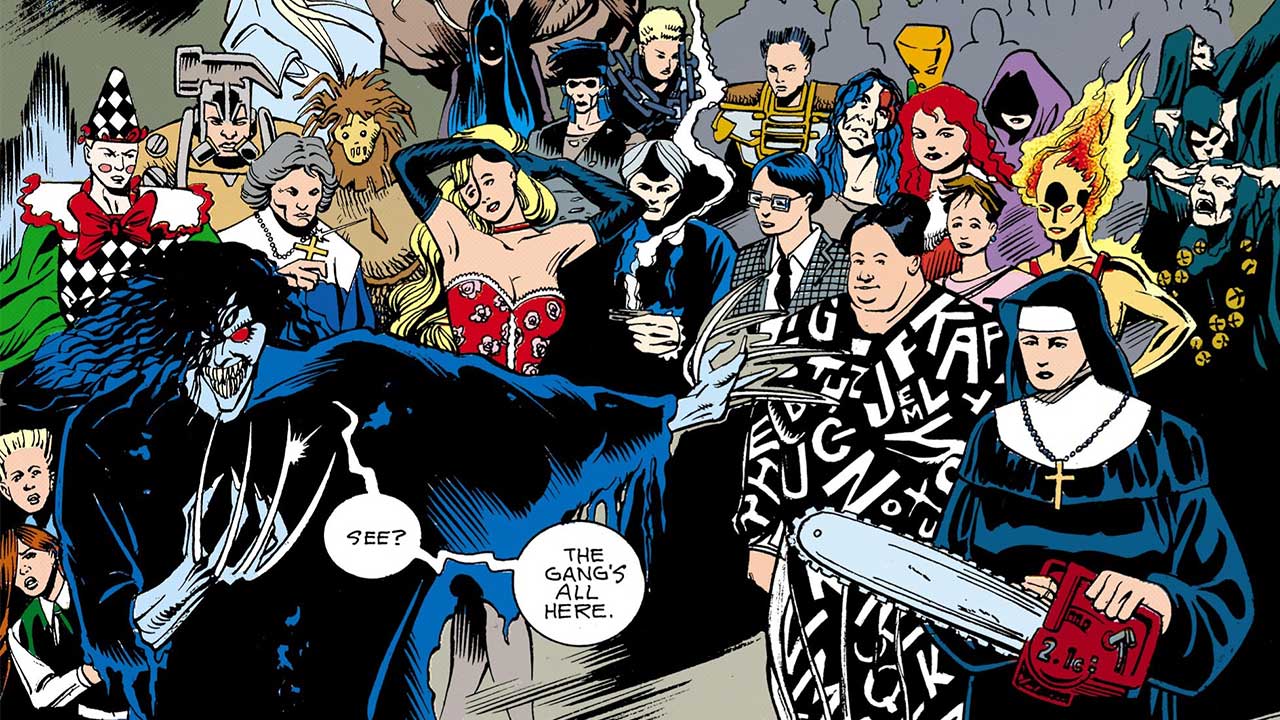 The Underground is populated with Jane’s many different personalities, and we got to experience many of them up close and personal this week. Longtime comic readers met some of their favorites, including Scarlet Harlot (who has a memorable scene in Doom Patrol #47), the Secretary, and Driller Bill. There were lots of cool details to catch, such as Baby Doll’s pajamas and doll, which looked exactly as they did in Doom Patrol #30. 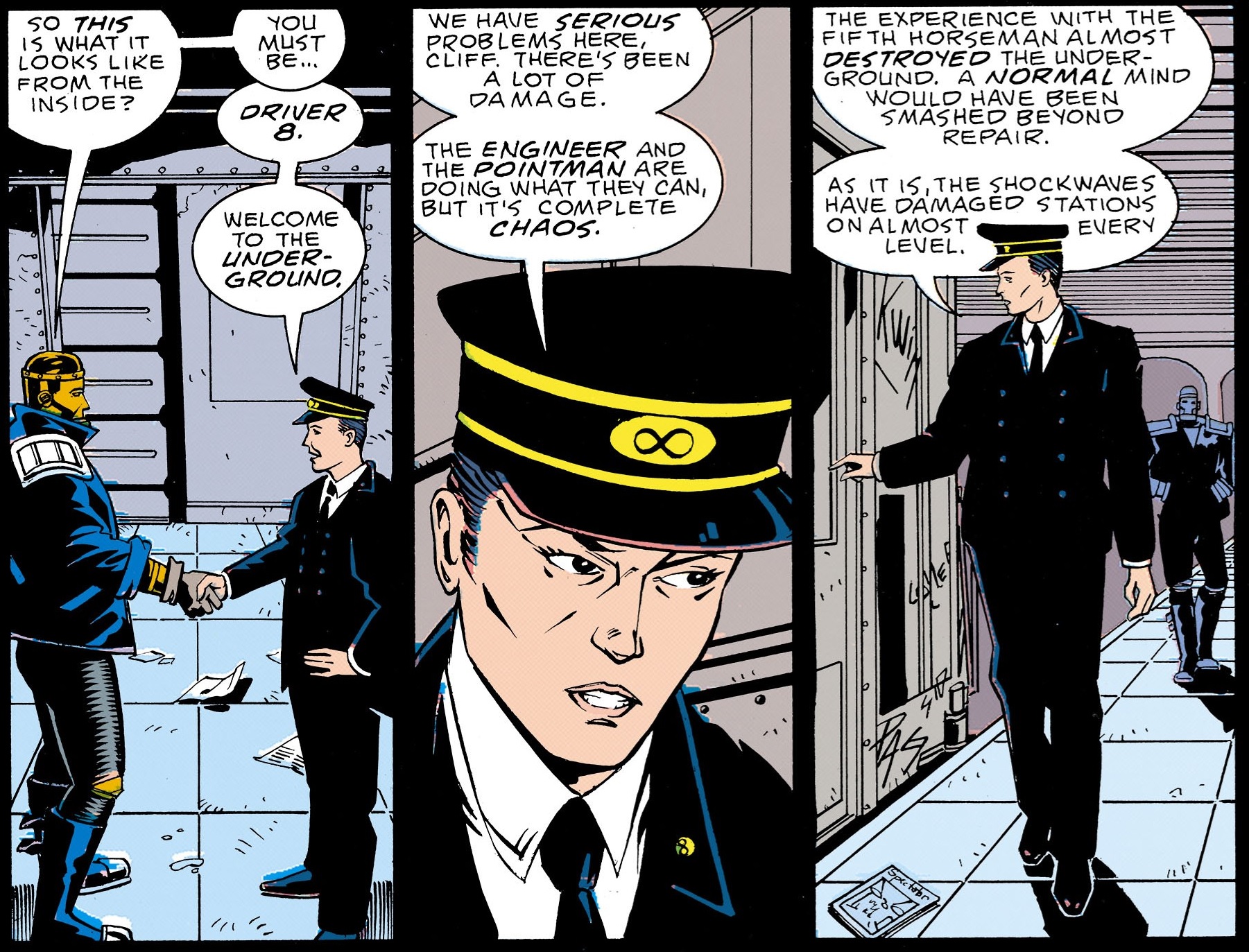 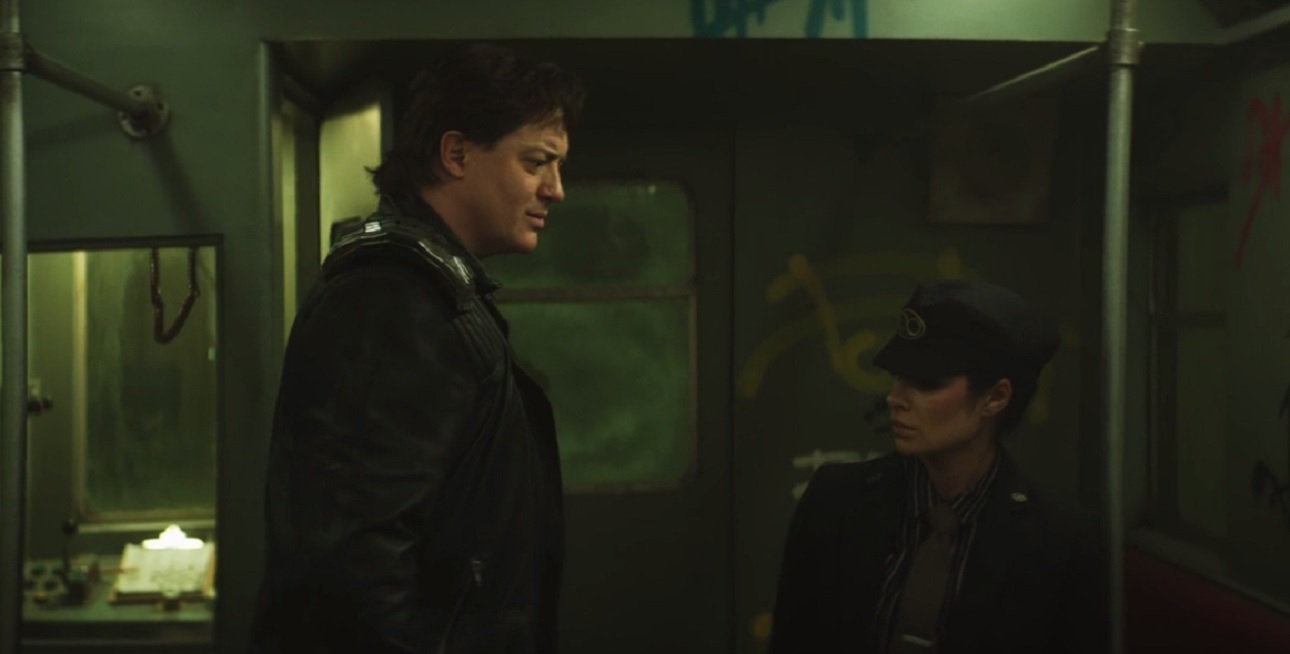 The show's creators really did their homework for this week's episode. Not only was Driver 8’s outfit straight out of the comic, but posters at the various subway stations were replicas of the ones in the panels of Doom Patrol #30. The writers, however, still gave their own spin to the story. In the comics, Driver 8 (who was first mentioned in Doom Patrol #20) was friendlier with Cliff and served as his guide through the Underground. And some of Driver 8’s comic-book dialogue was given to the helpful Penny Farthing, while Driver 8 chose instead to betray Cliff. 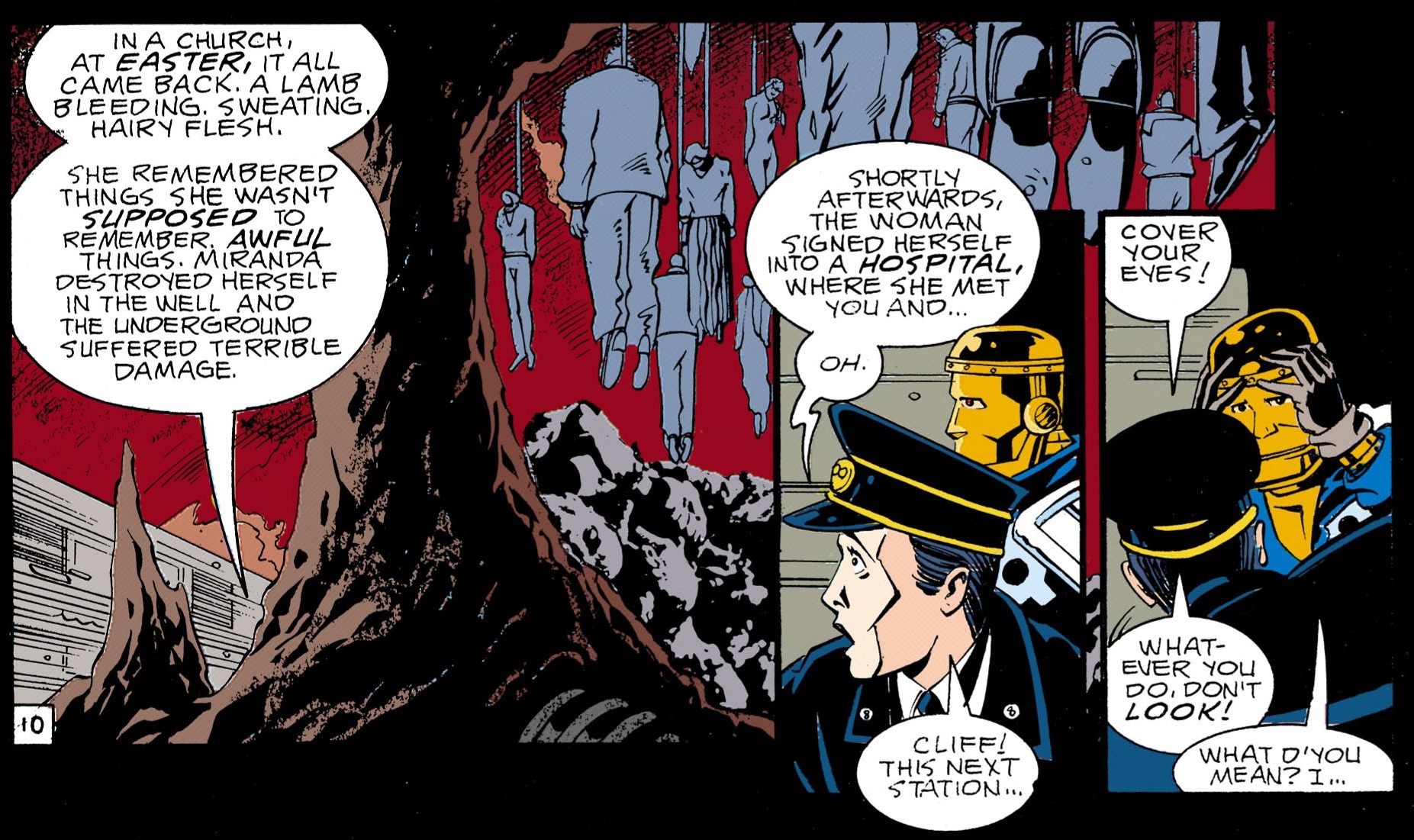 Miranda’s Station is one scary place! In both versions of the story, Cliff’s guide (Penny in the show, Driver 8 in the comic) instructs him to close his eyes. Unfortunately, Cliff spots some of the hanging corpses and learns how frightening these stations can be. Both versions of Miranda destroyed themselves in the Well, leaving Cliff to fear a similar fate for Jane. Miranda’s backstory was elaborated on in 1992’s Doom Patrol #55 (written by Grant Morrison and penciled by Richard Case). So check it out if you want to know more. 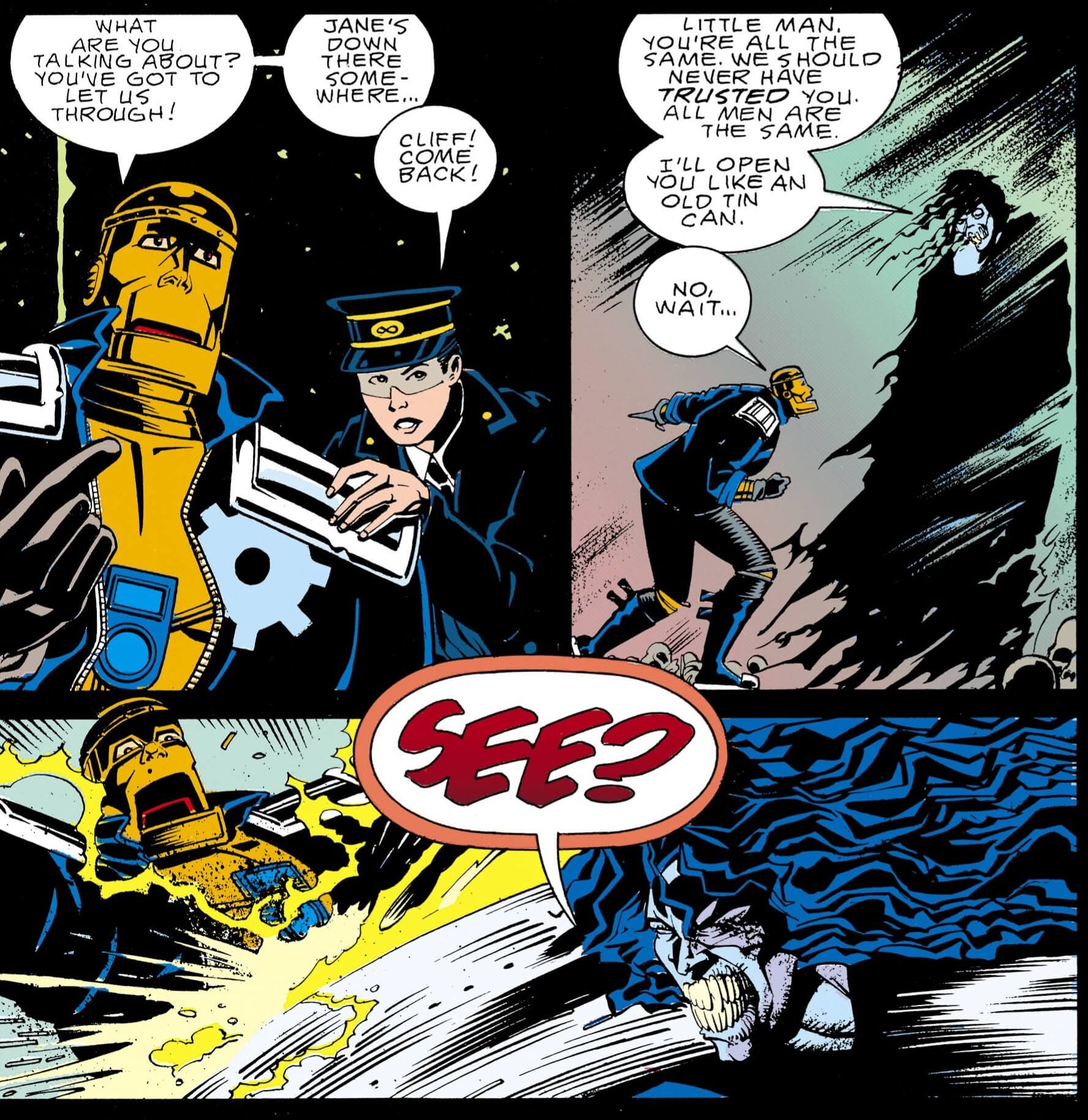 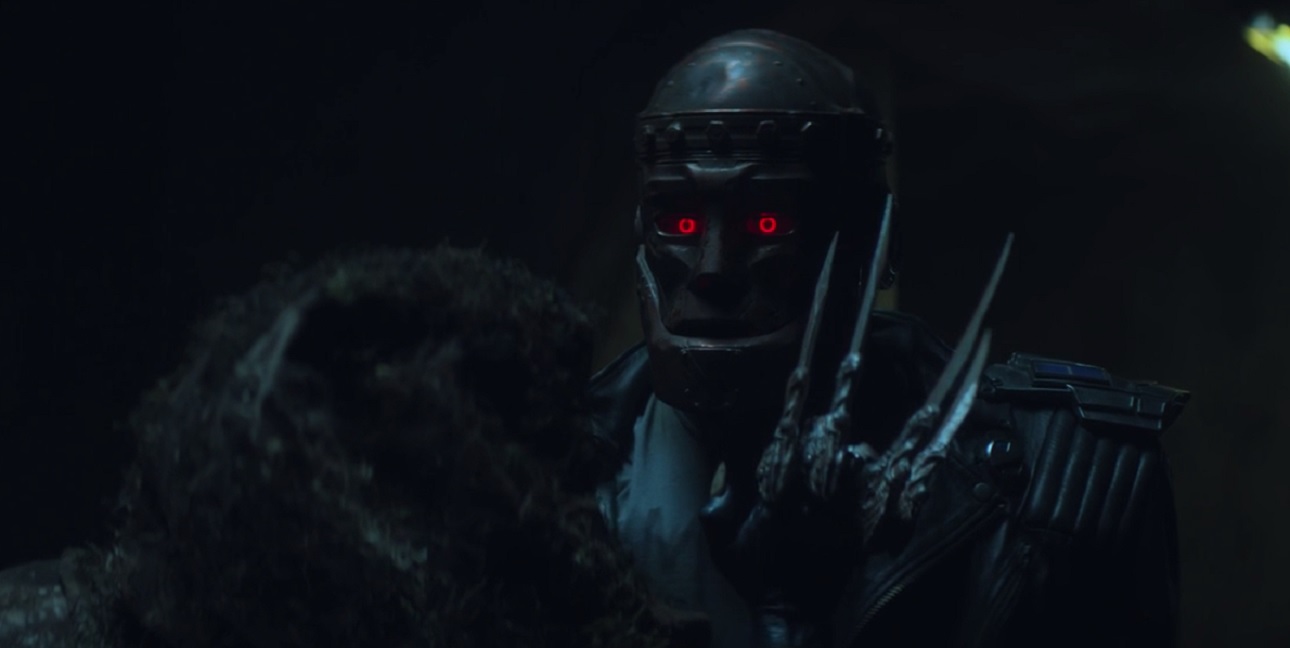 The only thing standing between Cliff and the Well was Black Annis, who refuses to let any man through. Black Annis was first seen in Doom Patrol #21, when Jane brought her personality out to fight against the Scissormen. In both versions of the story, Cliff is able to save himself from Black Annis by convincing her he’s not a man due to his robot body. Luckily it works, because this is one scary version of Jane!

Showdown at the Well 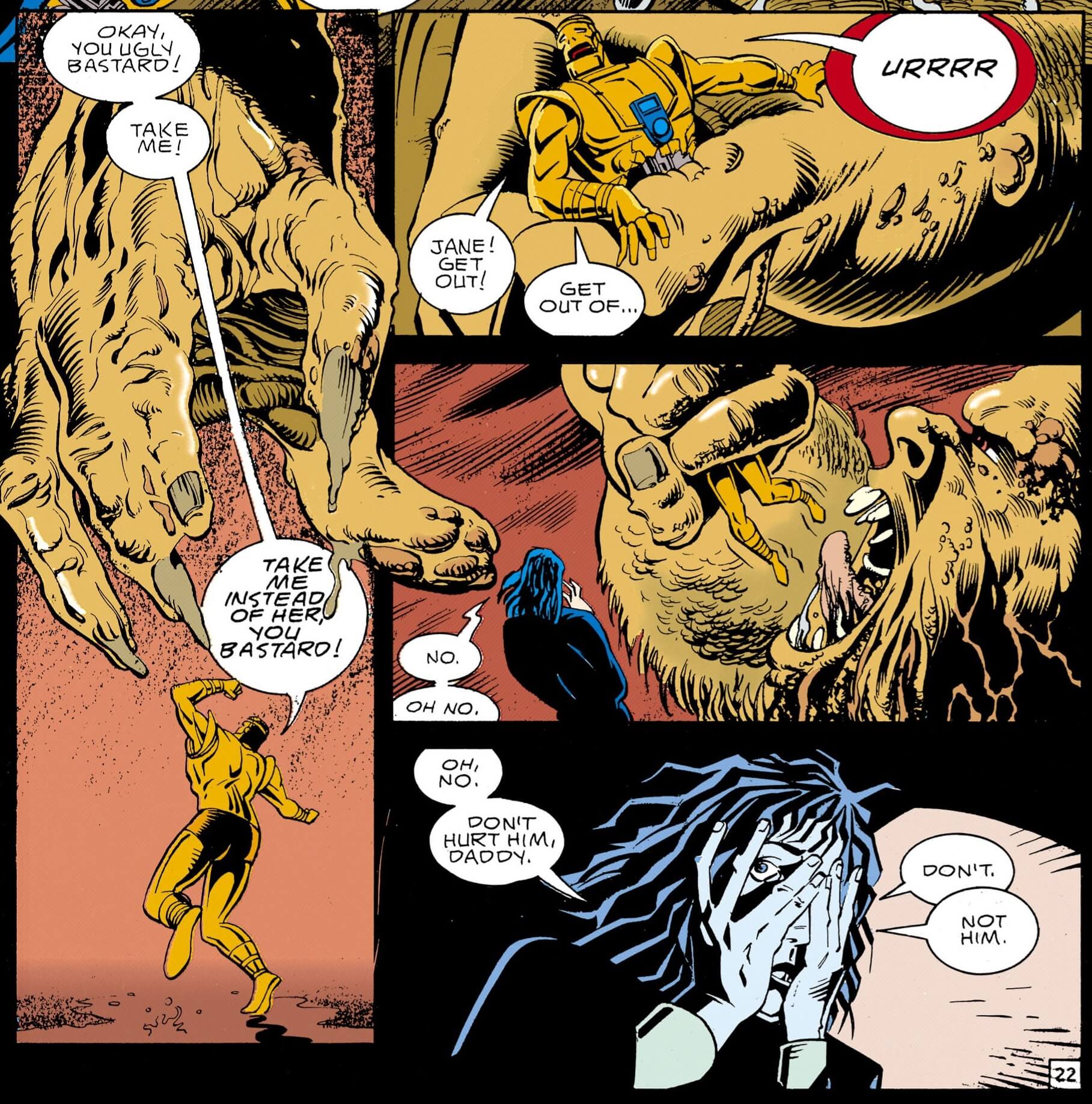 The final battle between Jane and her father was a complete panel-to-screen translation. Everything from Jane’s frightened mutterings to Daddy’s monstrous form to Cliff almost being devoured to Jane standing up to her father was taken from the final pages of Doom Patrol #30. In the comics, Cliff’s act of heroism meant a lot to Jane, and their friendship deepened as a result of it. It remains to be seen, however, if their screen counterparts will still have some issues to work through.

BONUS: The trailer for the next episode “Beard Patrol” features the Beard Hunter. If you want a taste of how hilarious next week’s episode could be, be sure to check out Doom Patrol #45 (written by Grant Morrison and penciled by Richard Case).