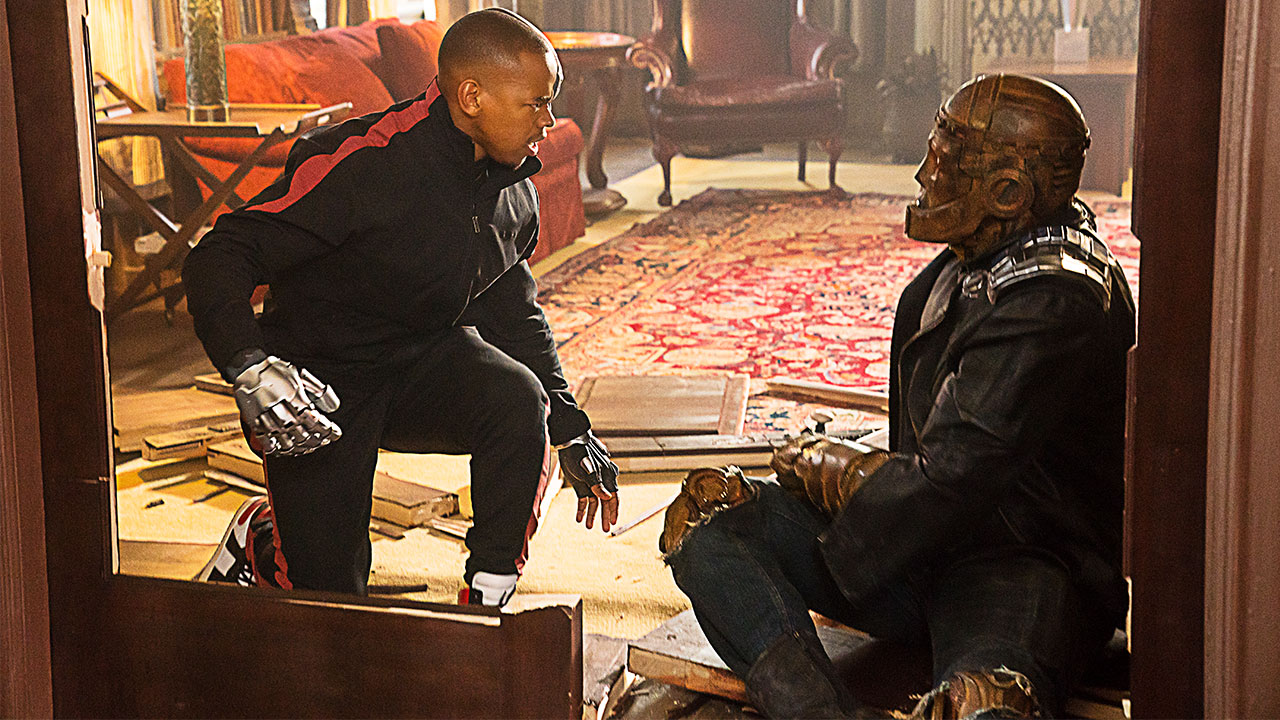 All the Easter Eggs in DOOM PATROL Episode 2: “Donkey Patrol”

Following its critically acclaimed pilot episode, things continue to get freaky in Doom Patrol’s second episode “Donkey Patrol”. For those looking to further explore its madness, we’re here to break down the comic book references and Easter eggs. Let’s dive in… 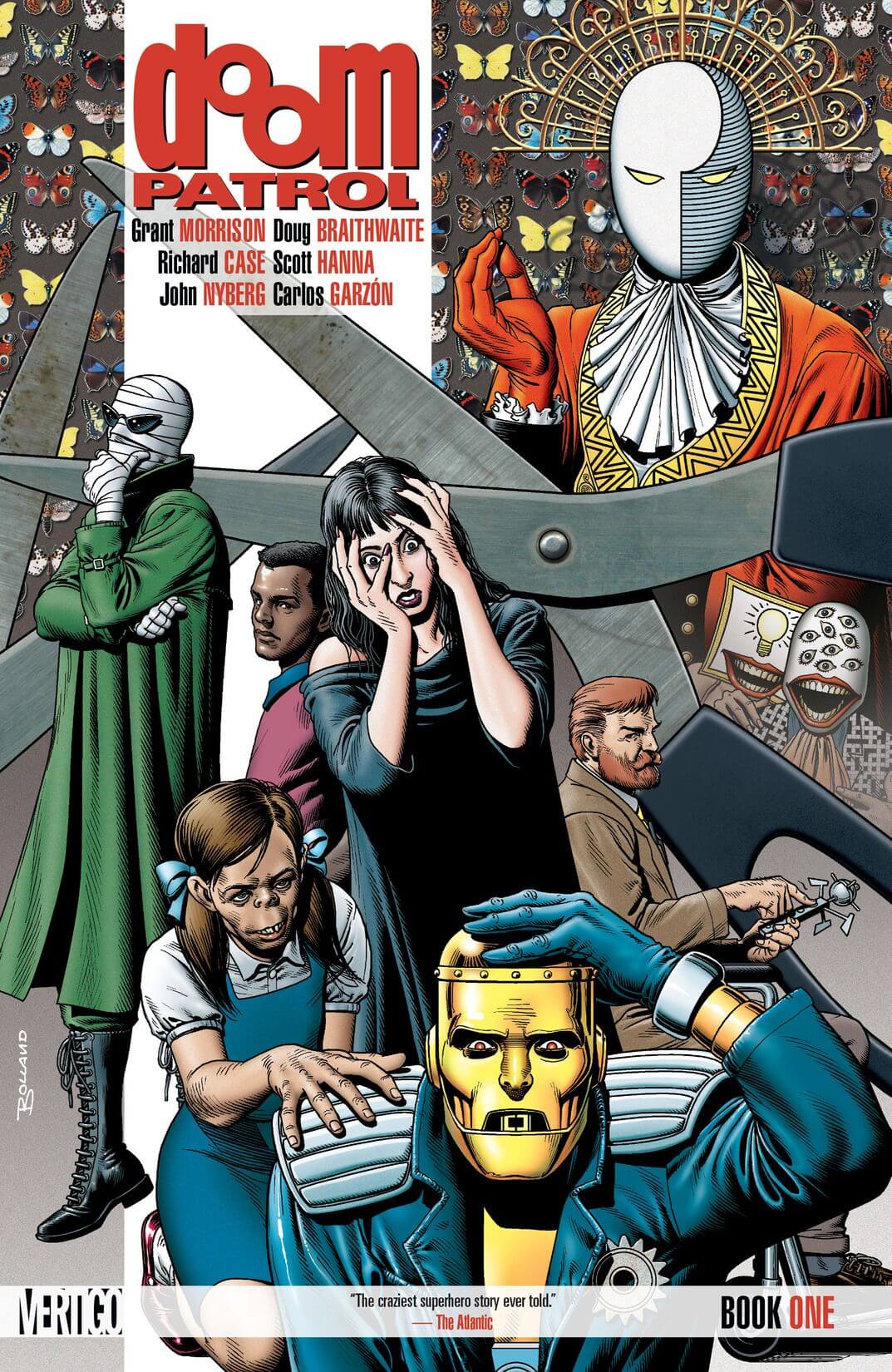 Thanks to Mr. Nobody’s ability to break the fourth wall, some of the Easter eggs can get very meta including the reference to “Grant Morrison fans." Mr. Nobody is referring of course to the comics writer who reinvented the Doom Patrol when he took over the title in 1989. Grant Morrison embraced the weirdness the original team had been known for and leaned into mind-bending surrealism. His version of the Doom Patrol became perhaps the most popular ever, and the show takes many cues from his run. You can check out the stories which inspired the series, and Mr. Nobody’s reference, starting with Doom Patrol #19, in which Morrison's run begins. 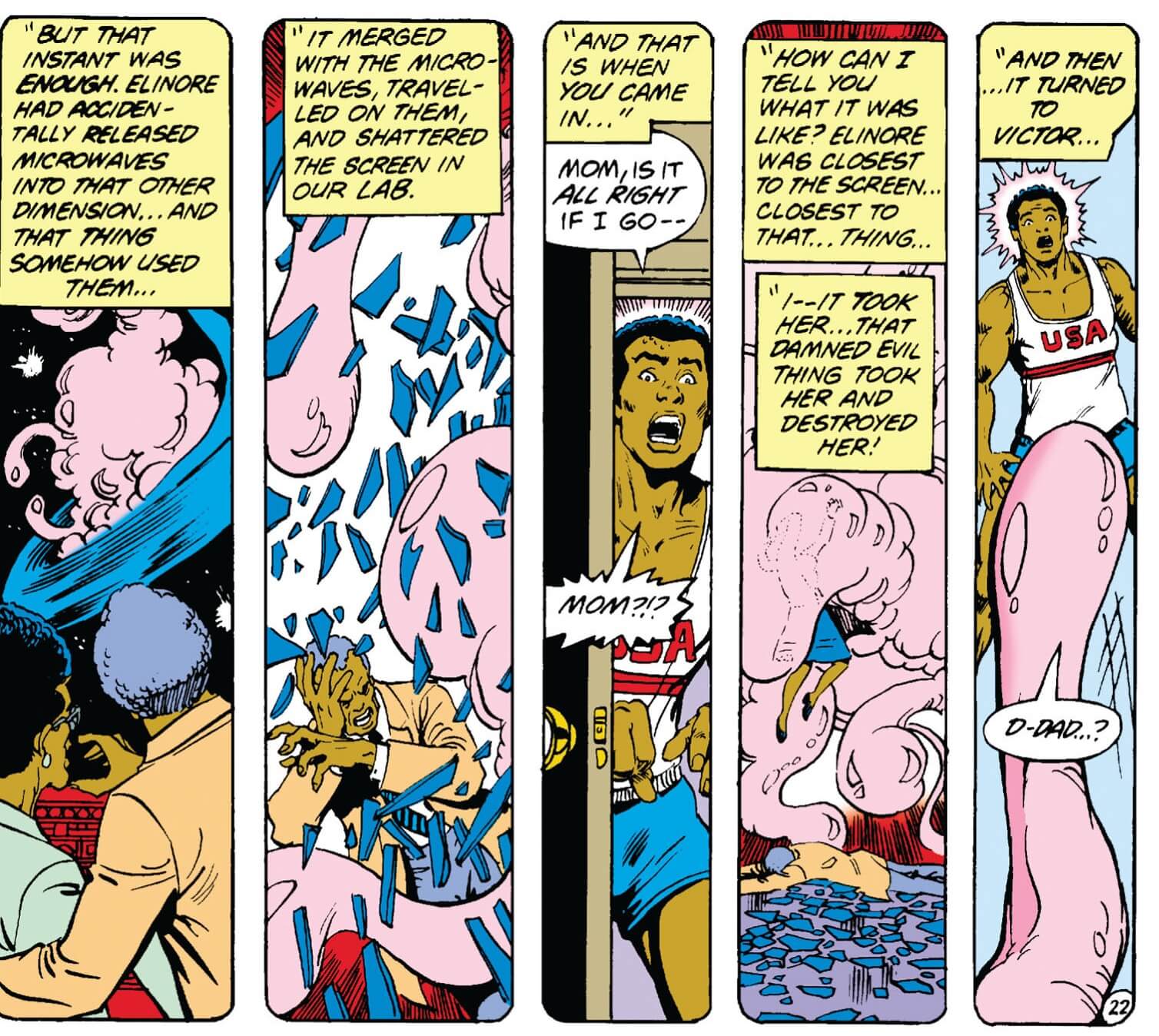 This episode introduced viewers to Victor Stone and his parents Elinore and Silas Stone. Victor Stone, a.k.a. Cyborg, first appeared alongside his father in DC Comics Presents #26 (written by Marv Wolfman and penciled by George Perez), in which the world was first introduced to the New Teen Titans. In this episode, Cyborg is operating out of Detroit, as he did in the comics when he wasn’t with the Teen Titans.

In "Donkey Patrol", Mr. Nobody forces Victor to relive the accident that killed his mother and made him Cyborg. The incident was first seen during a flashback in New Teen Titans #7 (written by Marv Wolfman and the penciled by George Perez); which was also Elinore Stone’s first appearance. Can we all agree that Mr. Nobody was a bit of a jerk for making Cyborg live through that again? 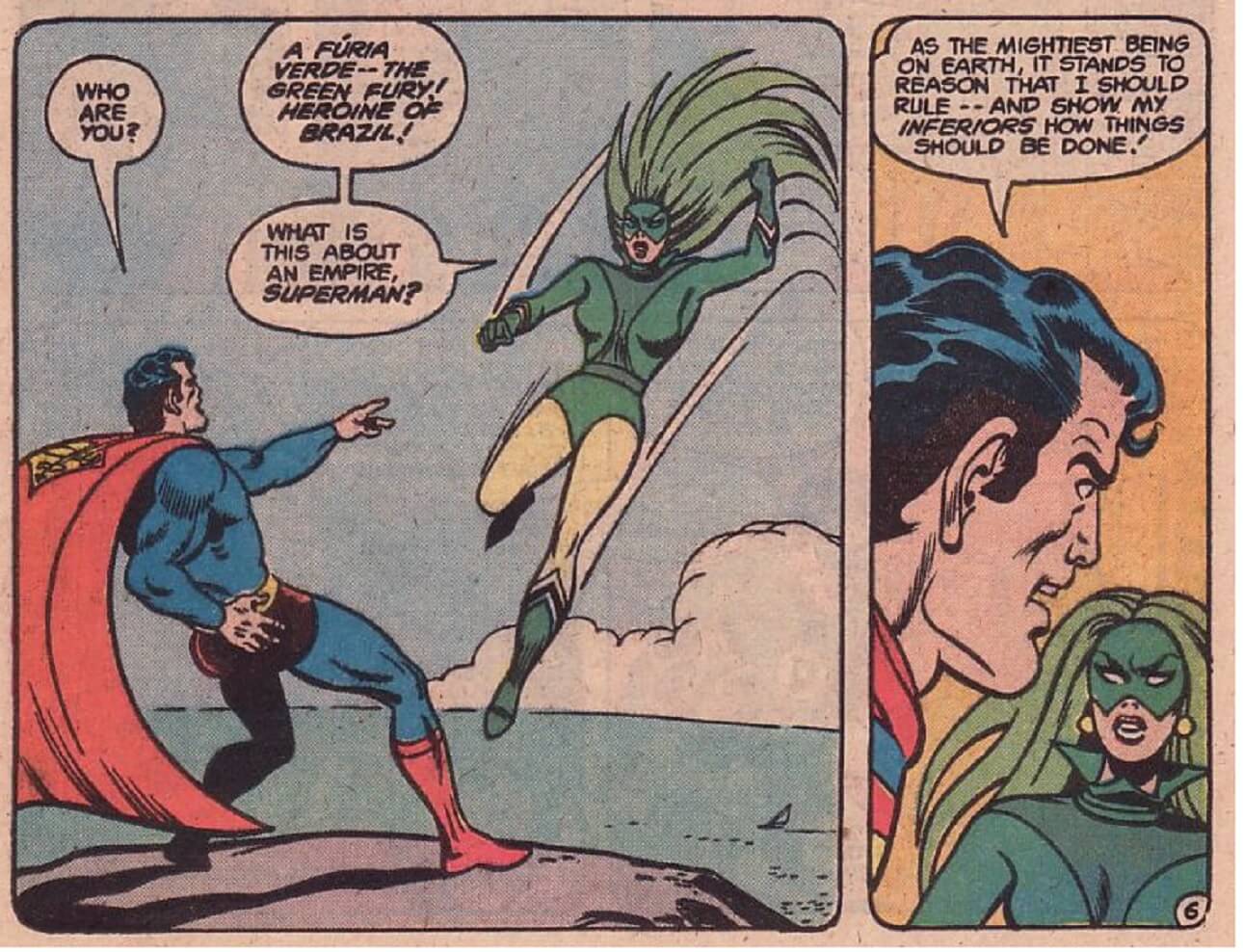 While Cyborg is looking through crime headlines, sharp-eyed viewers might be able to catch references to events from the television series Titans. One headline mentions the murder of Melissa Roth from Titans episode 1: “Titans”. If you’re eagerly awaiting more Superboy and Krypto after the cliffhanger in Titans episode 11: “Dick Grayson”, there is a brief mention here. One of the headlines says a Metropolis driver crashed his car after seeing a naked man with a dog wandering around. I guess Superboy couldn’t grab any clothes after leaving Cadmus...

There was also a headline about new laws protecting humans whose property gets damaged in metahuman fights. While this may be referring to events that haven’t happened yet, it's also possible that it’s a reference to Powerless, another live-action DC TV series Alan Tudyk was featured in. In the pilot of the series, Alan’s character Van Wayne (cousin to a guy named Bruce) worked at an insurance company that specialized in claims from citizens whose property was ruined in superhero battles. The series was retooled after the pilot and the insurance angle was dropped, but could Cyborg’s news blotter remember? With Mr. Negative’s habit of breaking the fourth wall, it wouldn’t be surprising.

There is also a headline referencing a flying girl, many of which are in the DC Universe. It’s hard to tell who they’re referring to in that news story, but a Stargirl series will be premiering later this year! Hmmm….

Cyborg calls this system “Grid," which was a similar monitoring unit he had in the comics. It later turned on Cyborg, became its own entity and joined the Crime Syndicate. Let’s hope Victor is keeping a close eye on it here…

Cyborg’s Relationship with the Doom Patrol 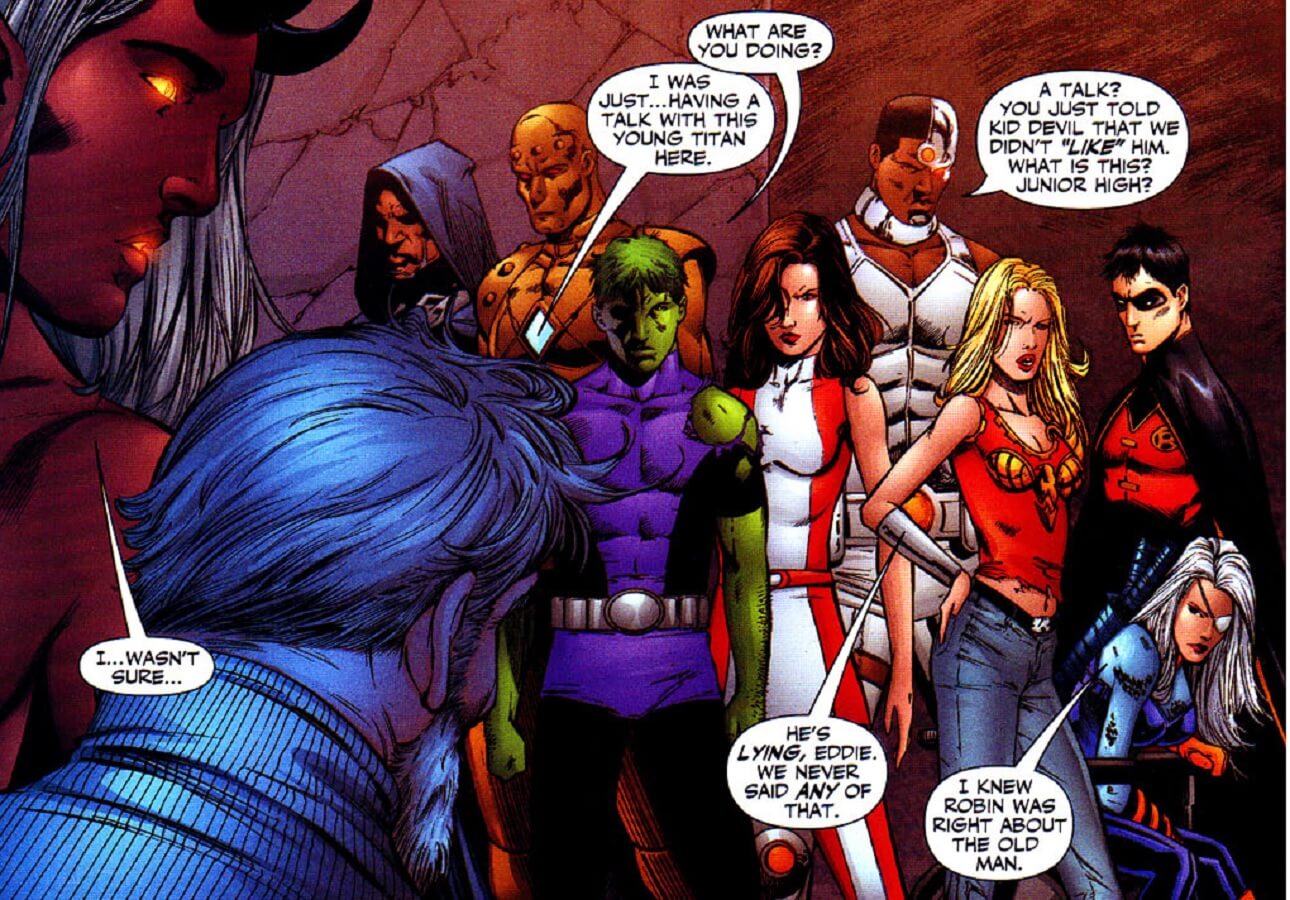 There have been lots of questions regarding Cyborg’s presence in the show, since he’s more known for his association with the Teen Titans and the Justice League. Victor Stone, however, is no stranger to the Doom Patrol. One of his closest friends is Gar Logan/Beast Boy, who has been in several incarnations of the team. Cyborg couldn’t help but notice the similarities between himself and Gar’s former teammate Robotman. He joked about their similar backgrounds when he finally met Cliff in New Teen Titans #13 (written by Marv Wolfman and penciled by George Perez), as he introduced himself by saying, “I’m the new 1981 style Super-Cyborg”. Cliff didn’t appreciate the humor. Despite this, Cyborg worked with Beast Boy, Robotman, and Mento to take on the Brotherhood of the Evil and avenge the deaths of the original Doom Patrol members. (Don’t worry, they got better.) Although this episode portrays a positive relationship between Cyborg and the Chief, in the comics Victor is not so enamored with him. In 2006's Teen Titans #37 (written by Geoff Johns and penciled by Tony Daniel), Cyborg chastised the Chief for using emotional manipulation as a tool to control his team. Niles does work in mysterious ways...

Viewers who paid close attention may have caught a reference to the Ant Farm, another element of Grant Morrison’s classic run. The Ant Farm was the headquarters for a twisted group called the Men from N.O.W.H.E.R.E., which was run out of the Pentagon’s basement. 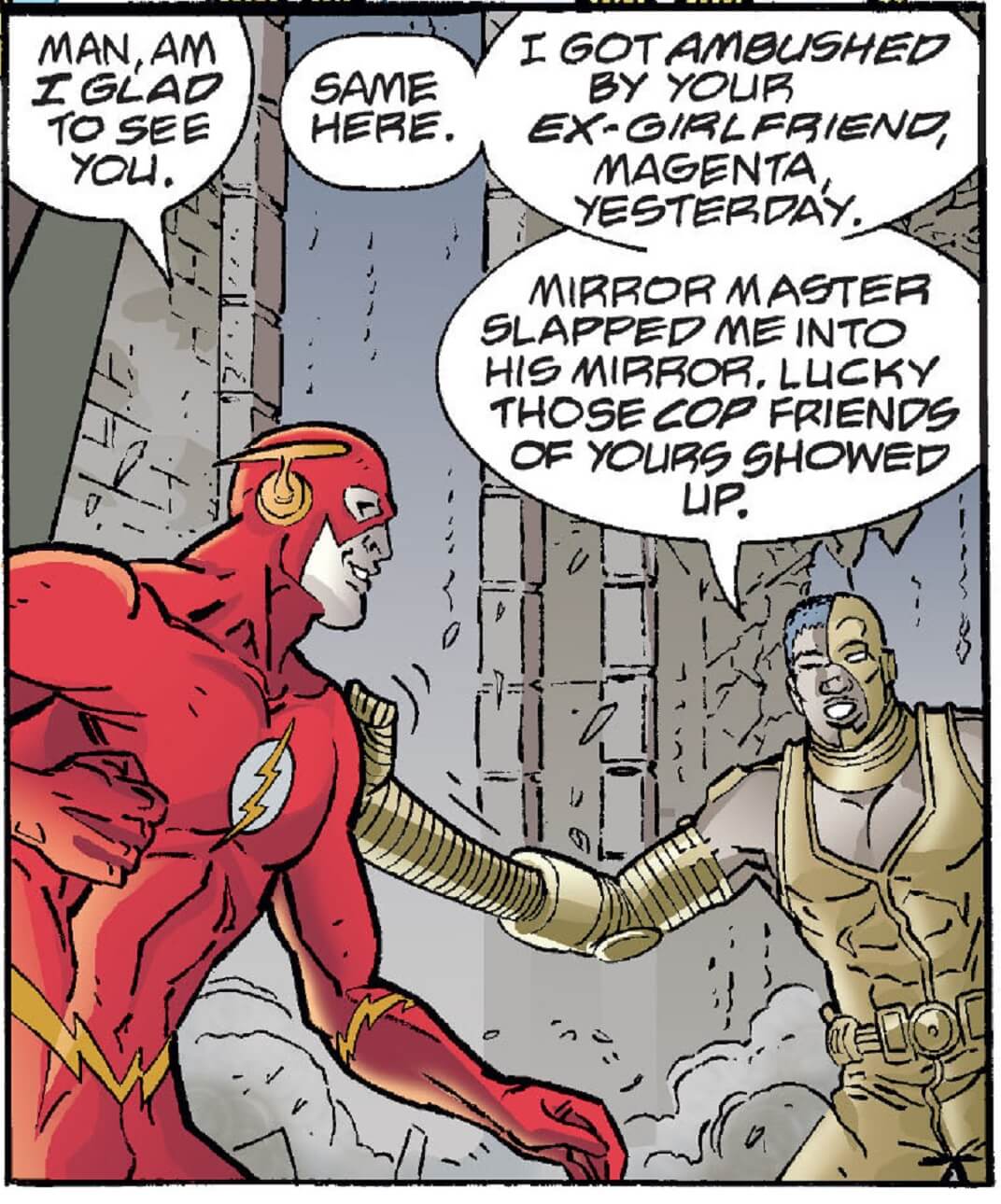 While talking to Crazy Jane’s Baby Doll personality, Cyborg mentions The Flash. Victor has been friends and teammates with various people who have held the Flash mantle, starting with New Teen Titans #1 (written by Marv Wolfman and penciled by George Perez), in which he first met Wally West. Not only did Wally become one of Victor’s best friends, but Cyborg later moved to Keystone City and acted as a sometimes partner to The Flash for a brief period of time after both men had left the Titans. He’s also worked closely with Barry Allen and Bart Allen, so he does have firsthand knowledge of their speed. Despite this, it’s probably a good idea to doubt his claims to Jane about The Flash being slow.

While looking at his Grid, Cyborg mentions A.R.G.U.S., the group first seen in 2012's Justice League #7 (written by Geoff Johns and penciled by Gene Ha). The group's name stands for Advanced Research Group Uniting Super-Humans, but the acronym has had different meanings over the years. The organization's purpose is to act as a liaison between the government and superheroes, helping in metahuman affairs. It's heavily featured on the CW series Arrow. 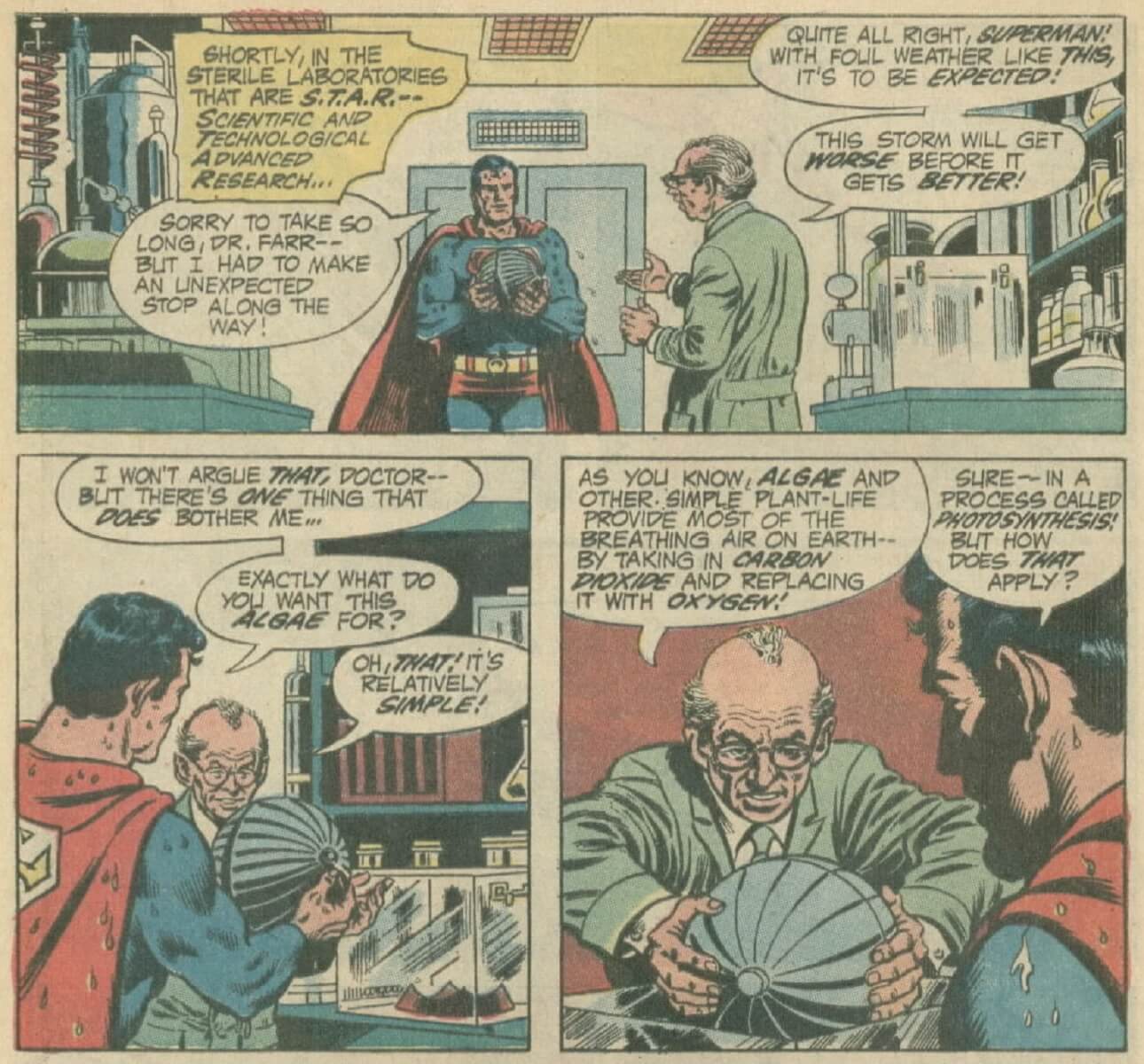 This episode also takes us to Silas Stone’s office at S.T.A.R. Labs. The DC Universe’s most famous research center was first seen in Superman #246 (written by Len Wein and penciled by Ira Yarbrough), and has since been heavily featured in TV's Young Justice and The Flash, along with the live-action Justice League film.

Cyborg and the Justice League 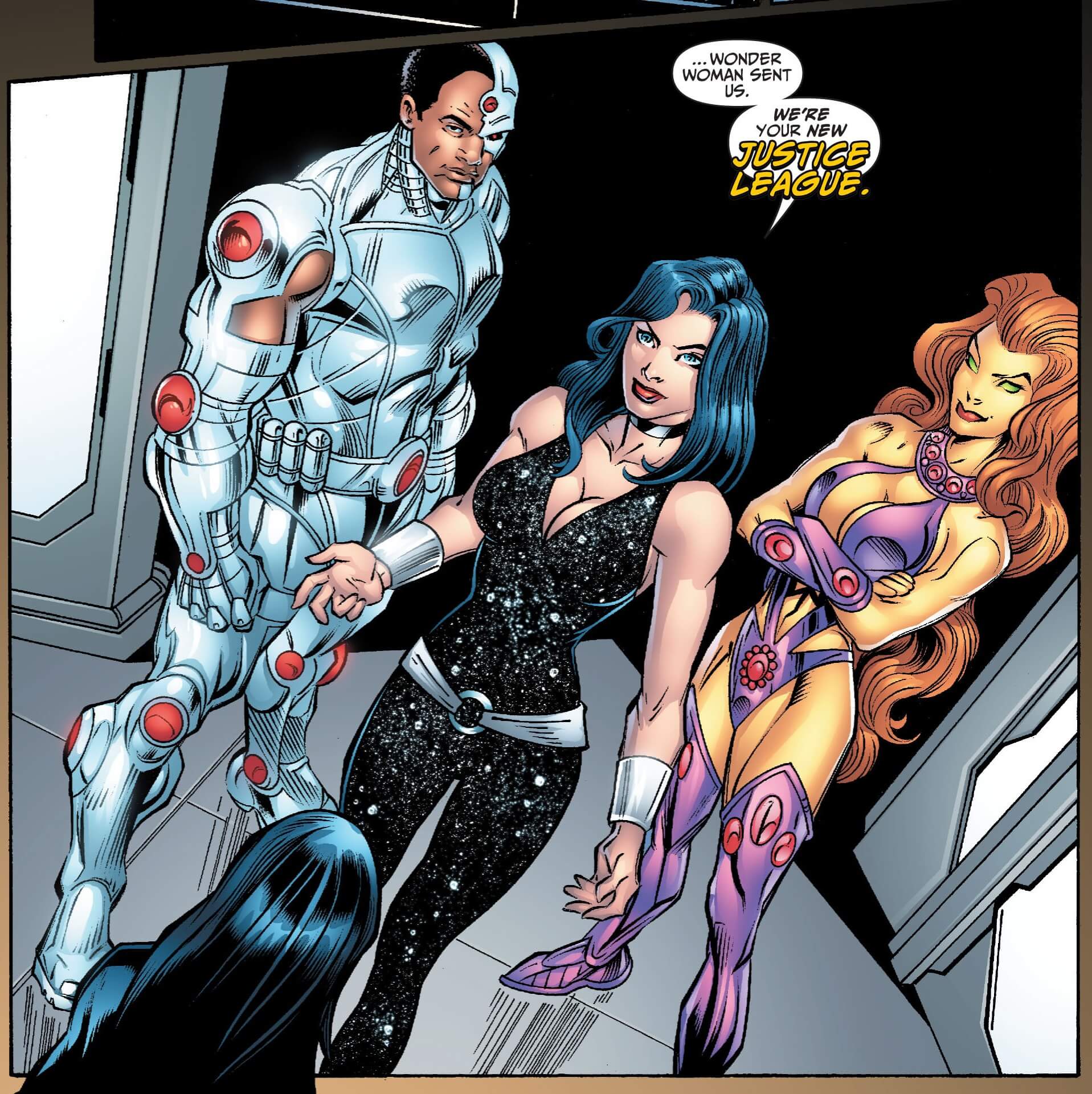 While talking to the Chief, Cyborg dreams of a day that he’ll be ready for the Justice League. Victor actually first joined the Justice League way back in 1985 on the Super Friends episode “The Seeds of Doom”. It took Cyborg a bit longer to get there in the comics, but he finally got an invite in 2006’s Justice League of America #41 (written by James Robinson and penciled by Mark Bagley). The New 52 and recent DC movies have since portrayed Cyborg as a founding member, showing that the League is his destiny no matter the continuity he’s in. 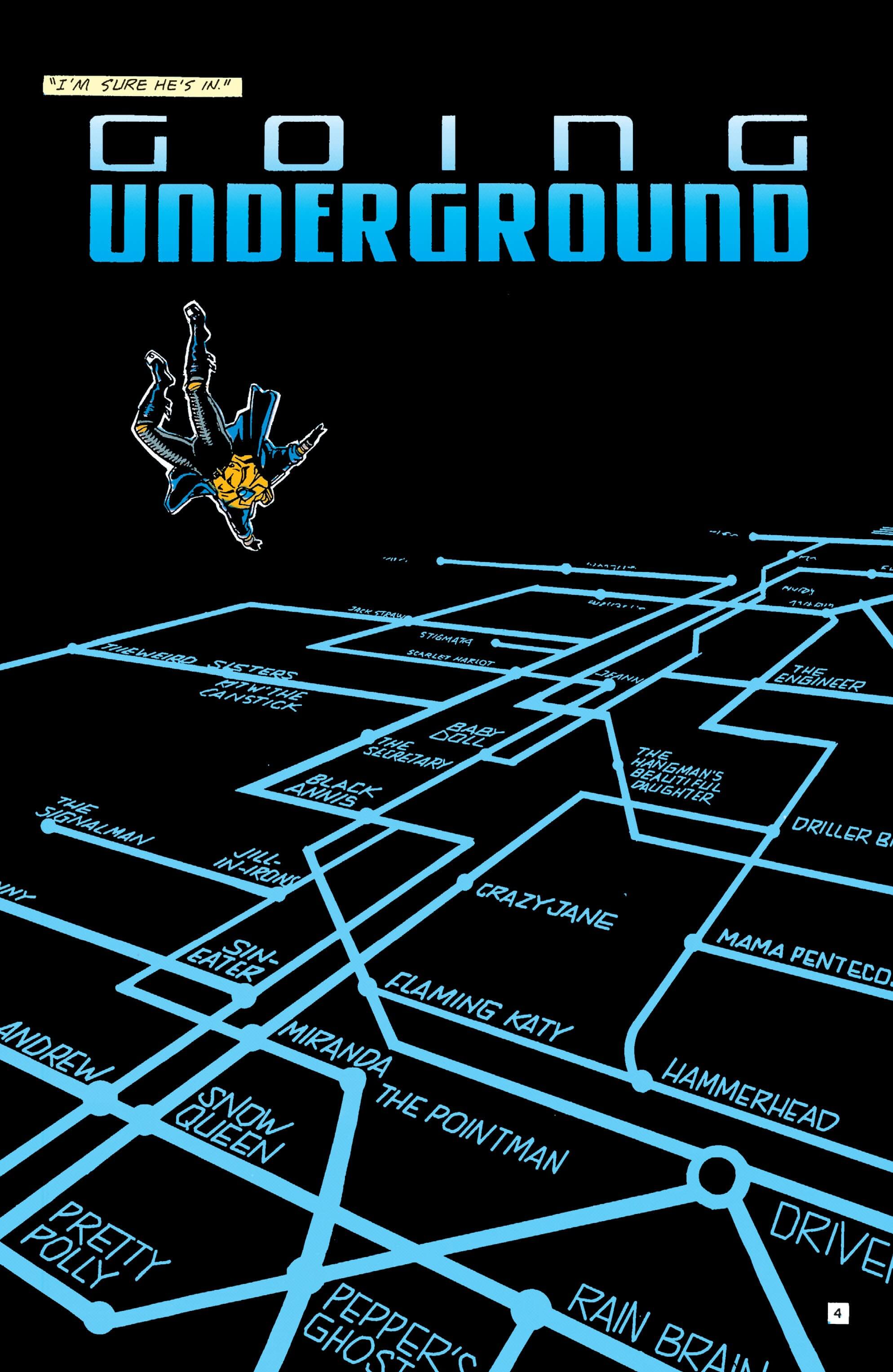 While rummaging through the Chief’s lab, Cliff finds tapes labeled for all of Crazy Jane’s personalities and a map of the Underground. The Underground is what Jane calls the mindscape where all of her personalities live. The map that Cliff sees in the Chief’s lab is similar to the one that was featured in 1990's Doom Patrol #30 (written by Grant Morrison and penciled by Richard Case). 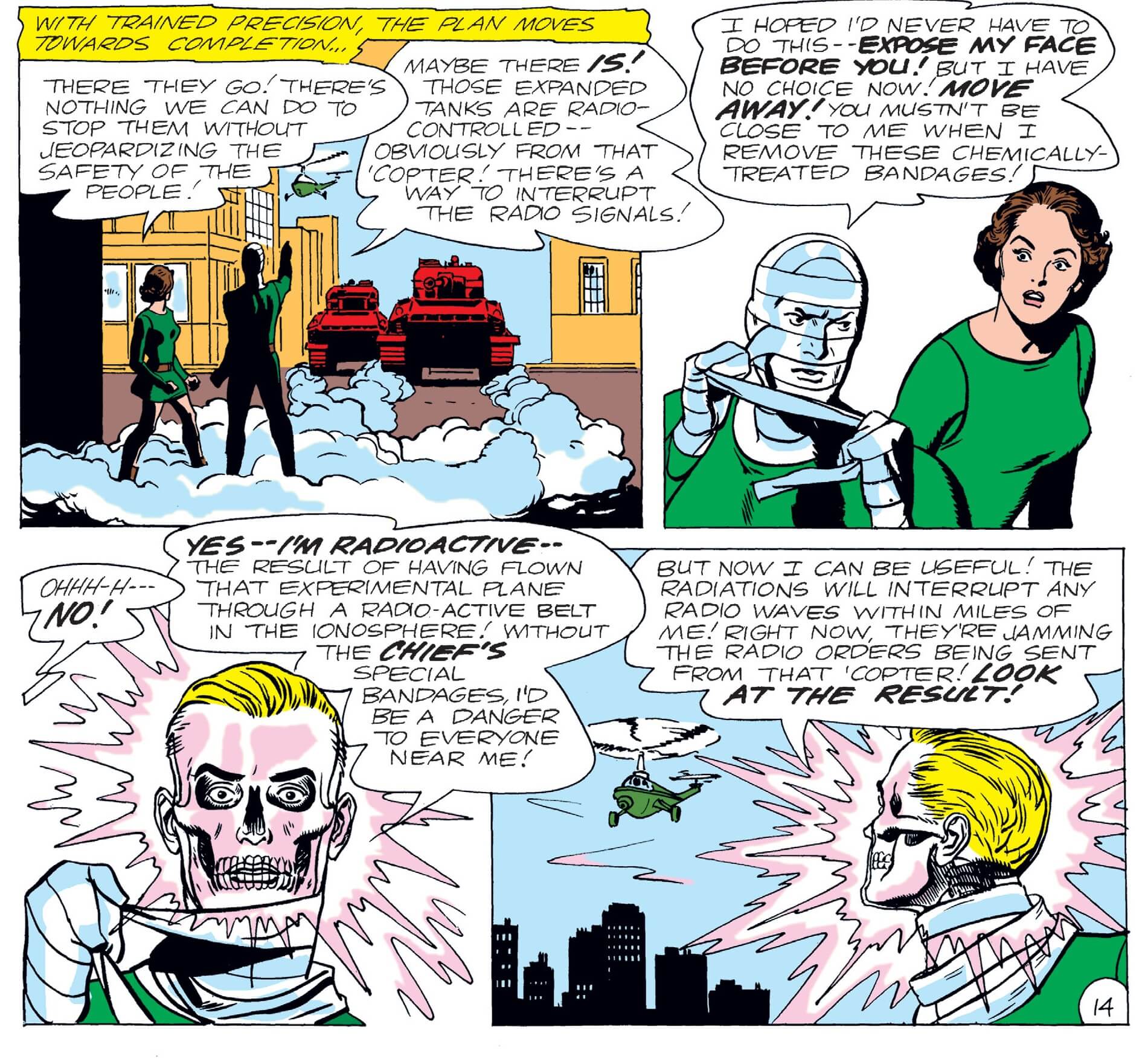 Viewers got to take a peek at what Larry looks like under his Negative Man bandages in the final scenes of "Donkey Patrol". In the early days of the original Doom Patrol comic series, Larry was very guarded about his true appearance, and would only remove his bandages in the privacy of his own room. In 1964's Doom Patrol #87 (written by Arnold Drake and penciled by Bruno Premiani), Larry finally revealed his unwrapped form to his teammates and the readers. Although he wasn’t as crispy looking as his television counterpart, his paranoia about only removing his bandages in his bedroom was the same.

Did you find any Easter eggs in "Donkey Patrol" that we missed? Let us know in our Community!