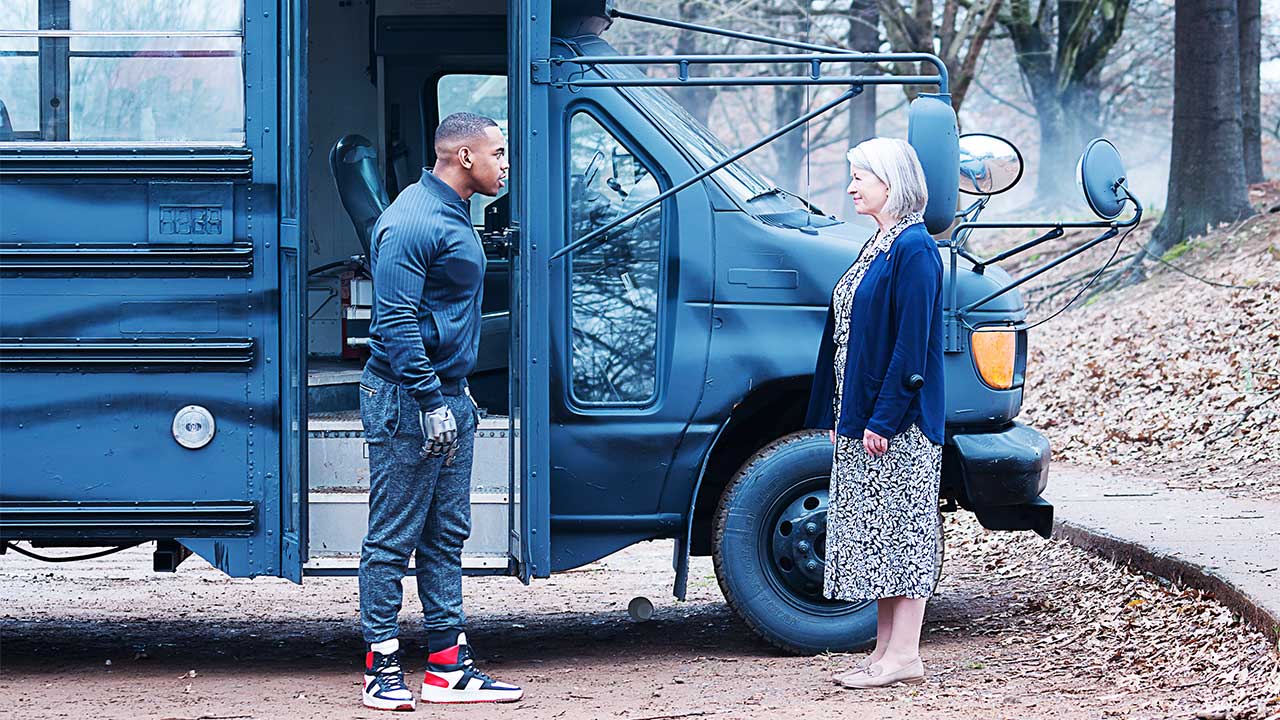 All the Easter Eggs in DOOM PATROL Episode 11: “Frances Patrol”

Cyborg and Crazy Jane try to track down Flex Mentallo while the Bureau of Normalcy makes their move against the team in this week’s episode of DC Universe’s Doom Patrol -- “Frances Patrol.” Naturally, things didn’t go as expected, and there were some cool comic book references found along the way. Let’s break down the Easter eggs we found… 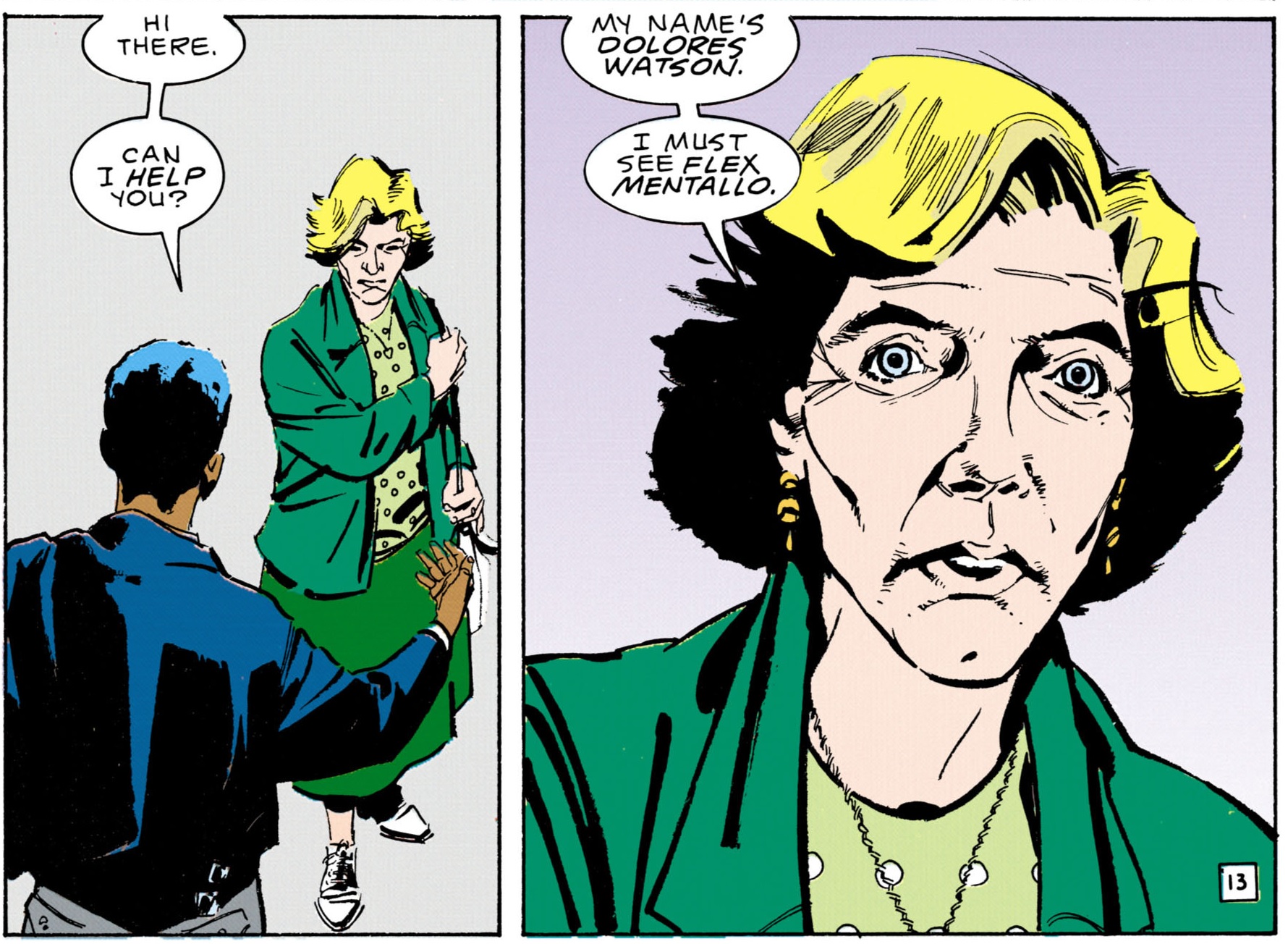 This week Jane took charge of the search for the Chief and decided that Flex Mentallo could be the break they need to crack the mystery wide open. In order to find Flex, Jane arranges a meeting with his former girlfriend Dolores. If Jane had read the comics, she might have known that Dolores meant trouble. Readers first met Dolores Watson in 1990’s Doom Patrol #39 (written by Grant Morrison and penciled by Richard Case), when she was searching for her former boyfriend Flex. Dolores was eventually intercepted by the Bureau of Normalcy, who brainwashed her into becoming their sleeper agent. Dolores reunited with Flex in Doom Patrol #43 (written by Grant Morrison, penciled by Richard Case and Steve Yeowell), and as the Bureau arrives she apologizes to her former lover before aging rapidly to dust. In most of Dolores’s appearances she’s depicted wearing green clothing...because she and Flex were both created by a child’s magical green crayon. And speaking of Flex Mentallo….

The Hero of the Beach 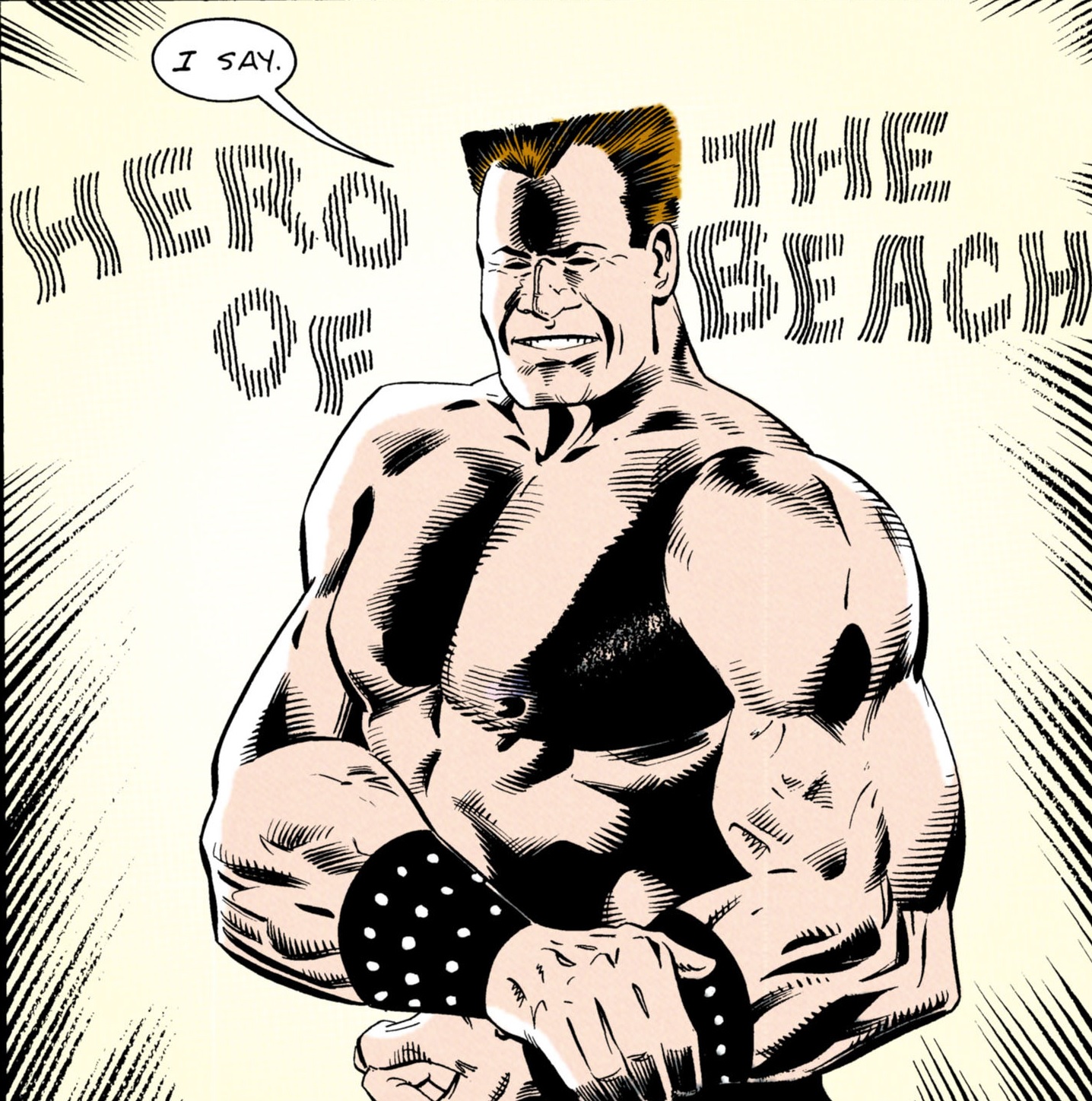 In this week’s episode, Flex is referred to as “hero of the beach," a title that has some special significance. Some of you may have noticed that comic book characters will occasionally appear with logos floating over their heads to introduce the characters to the readers. With Flex, his “floating logo” (known as his “hero halo”) is part of the story and the other characters can see it. During a flashback in 1991’s Doom Patrol #42 (written by Grant Morrison, penciled by Richard Case and Mark Dringenberg), Flex discovered that whenever he used his muscle powers, the words “Hero of the Beach” would appear above him as a halo! Flex had lost that ability in the following years, but was able to regain it while in the Bureau’s captivity during Doom Patrol #44 (written by Grant Morrison and penciled by Richard Case).

“Look at my Elbow” 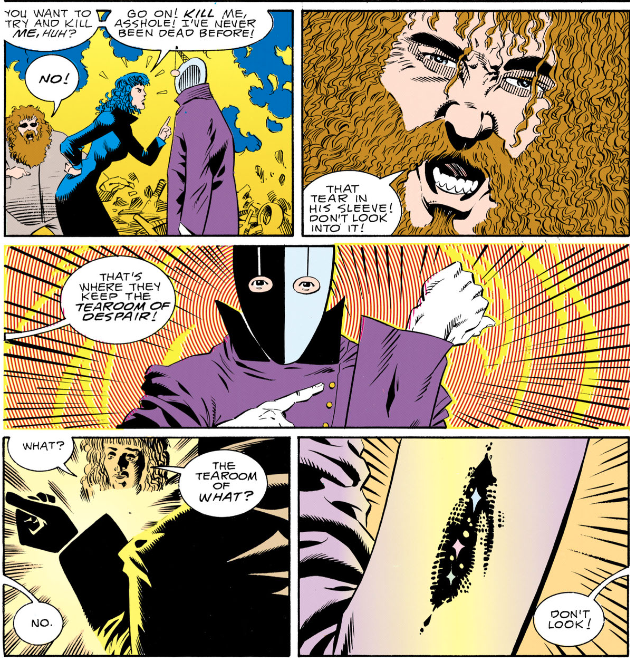 The Bureau of Normalcy struck this week, sending two of their agents to abduct Victor and Jane. Dolores was able to subdue Vic with a device on her elbow. This is a reference to a similar abduction method the Bureau employed in the comics. In 1990’s Doom Patrol #36 (written by Grant Morrison and penciled by Kelley Jones), the Bureau tried to get Jane to look at their elbows, but instead of a scientific device their sleeves had a metaphysical tear. Anyone who gazed at this tear would be magically transported to the Tearoom of Despair, an interdimensional prison. Jane embraced the challenge and wound up too strong-willed for the Tearoom. Whether in comics or live-action, the Bureau has never been able to stop Jane with the “look at my elbow” trick. 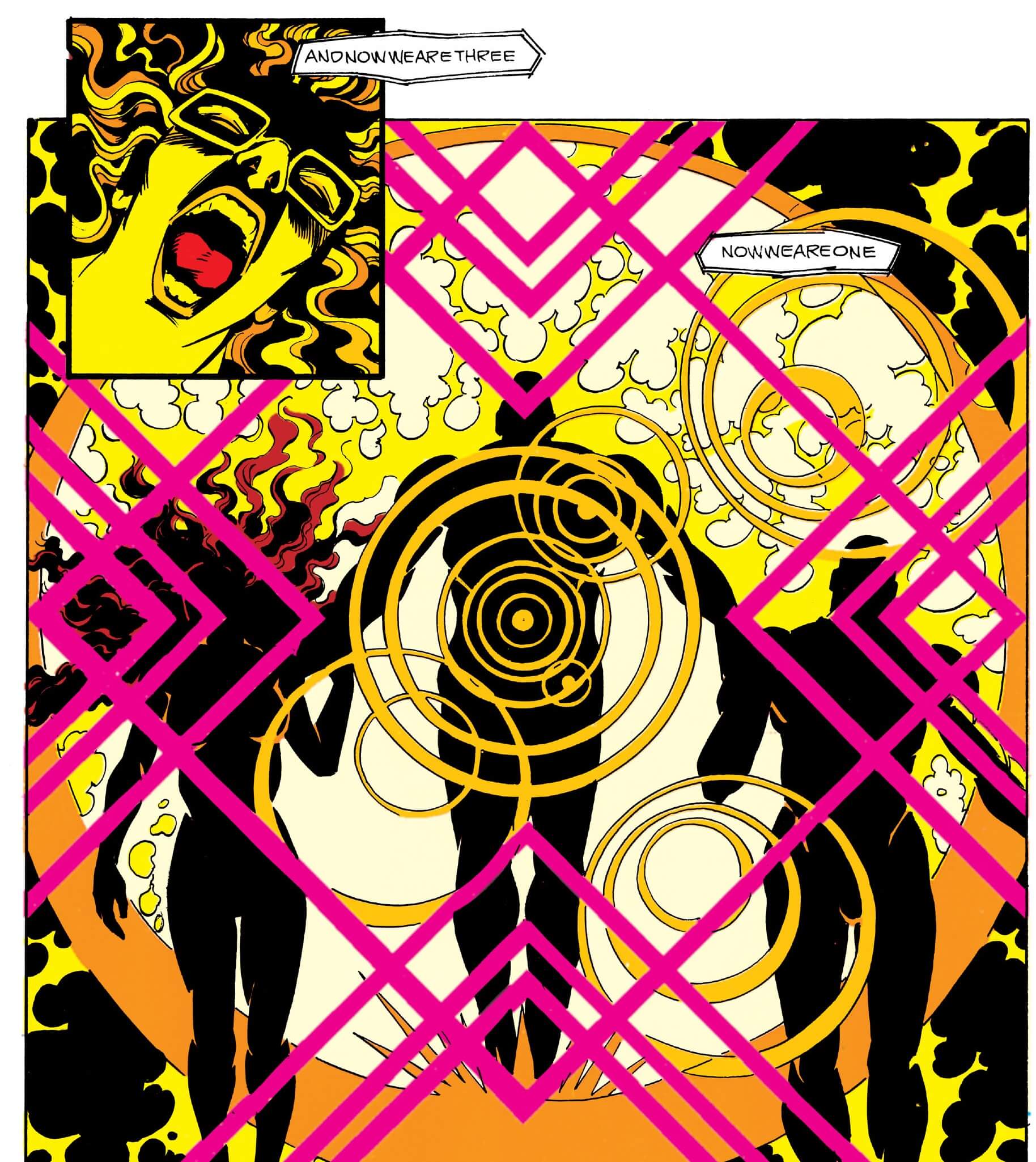 For weeks, Larry has been having strange dreams involving his former lover John Bowers. In this episode we learned that these were more than dreams. Assisted by the Negative Spirit, Larry was communicating with the real John this whole time. The elderly John accepted the experience and said he was too old to be asking questions, but it’s understandable if some viewers are confused. But this telepathic ability has manifested in the comics a few times over the years. In 1989’s Doom Patrol #19 (written by Grant Morrison and penciled by Richard Case) the Negative Spirit evolved and fused itself to Larry Trainor and Eleanor Poole to become the being known as Rebis. This was the first time the Negative Spirit was given the ability to connect two people’s minds and it wouldn’t be the last. As Rebis, the Negative Spirit also used this ability on Cliff and Jane in Doom Patrol #30 (adapted into the “Jane Patrol” episode) and again in 2017’s Doom Patrol #6 (written by Gerard Way, penciled by Brandon Bird and Nick Derington). We’re still learning more about the limits of the Negative Spirit’s powers, so it will be interesting to see what he’s capable of now that he and Larry are no longer feuding.

Honorable Mention: The ongoing subplot of Animal-Vegetable-Mineral Man continued this week, as a news report gave an update on the odd villain’s trial. Apparently, authorities are unable to get Larson to testify against his dinosaur head! It’s a shame because the dinosaur head would probably rat him out in an instant!