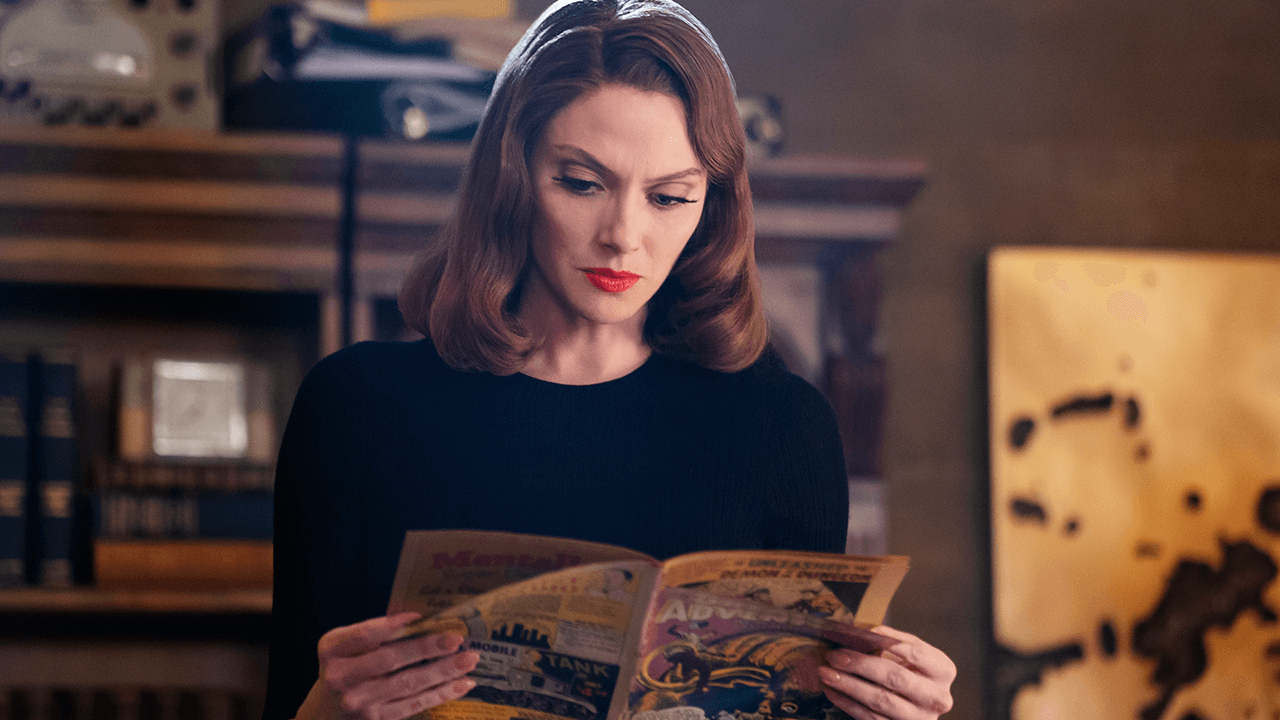 All the Easter Eggs in DOOM PATROL Episode 10: “Hair Patrol”

The Chief was both the hunter and the hunted in this week’s episode of DC Universe’s Doom Patrol, “Hair Patrol.” Viewers were taken from the Great White North to the drain of Niles' sink in Doom Manor. Naturally there were plenty of Easter eggs along the way. Let’s break them down… 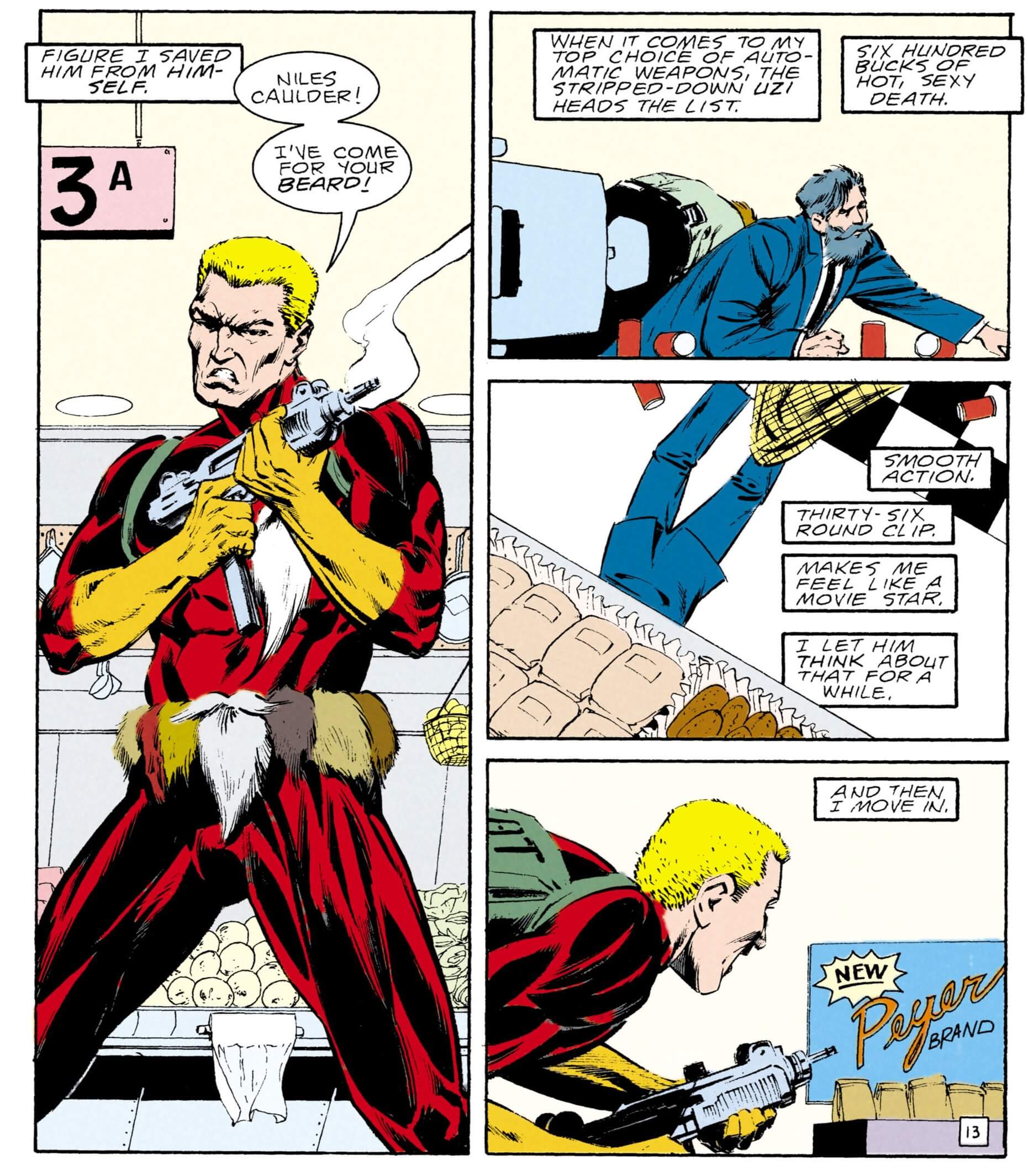 This episode introduced the Beard Hunter, a strange foe even by the Doom Patrol’s standards. The Beard Hunter made a single, albeit memorable, appearance in 1991’s Doom Patrol #45 (written by Grant Morrison and penciled by Vince Giarrano), in which he was hired by the Bearded Gentlemen’s Club of Metropolis to retrieve the Chief’s beard. What were they planning on doing with it? Who knows! Like his television counterpart, Ernest had a contempt for those with beards due to his inability to grow one of his own. But his ability to link to a person's brain stem by consuming their facial hair is entirely a creation of the show. 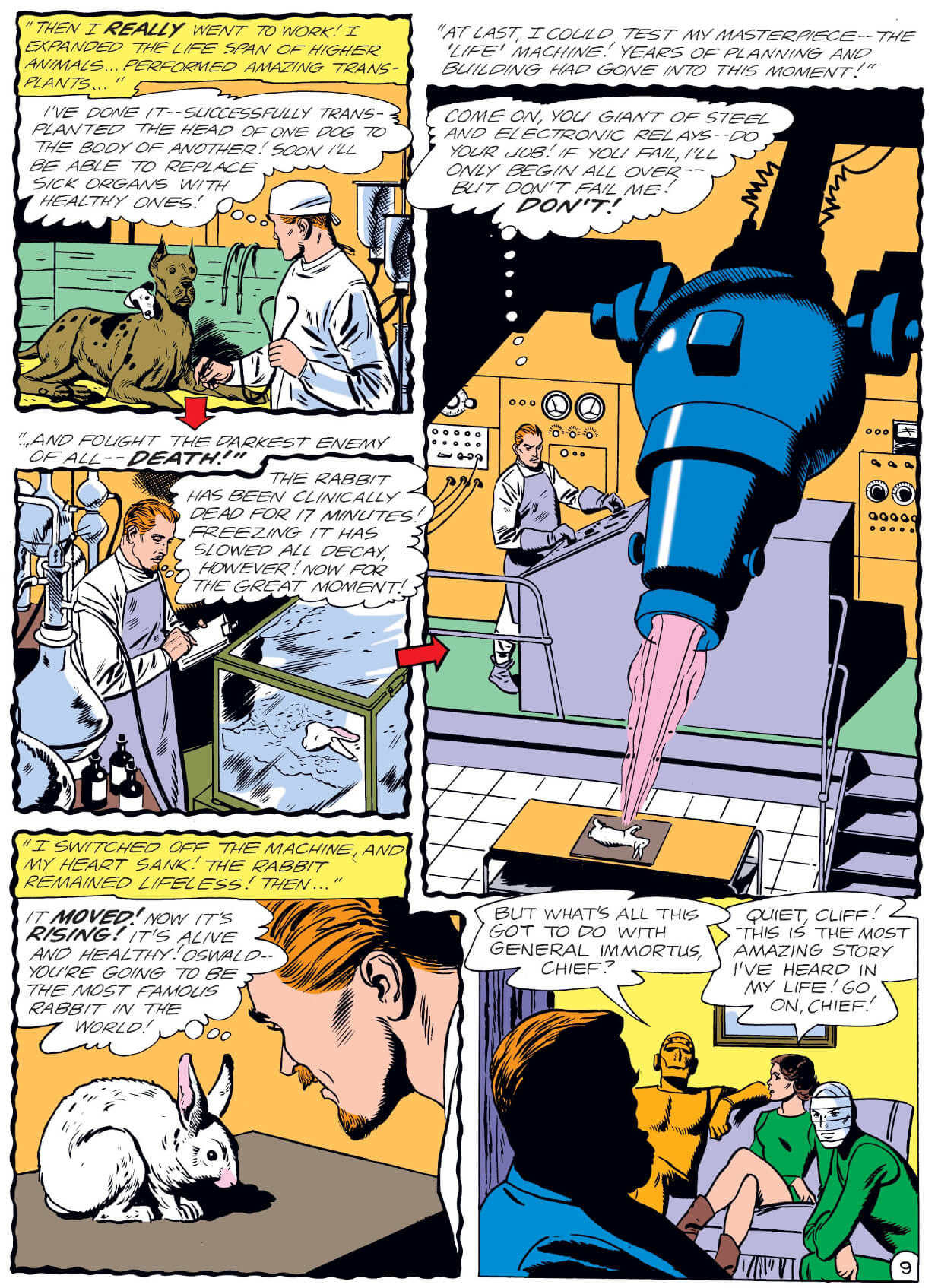 For weeks, fans have been asking why Niles doesn’t seem to age. This week we found a possible answer: Niles may have discovered the secret to eternal life from his primitive companion. Niles' quest for the secrets of immortality was first chronicled in 1964’s Doom Patrol #88 (written by Arnold Drake and penciled by Bruno Premiani). In this issue, he made a breakthrough without meeting any primitive females, but decided to keep his research a secret. Like his screen counterpart, Niles was worried about the secrets of eternal life falling into the wrong hands. This put him at odds with General Immortus, an aged warlord who will stop at nothing to get Niles to reveal the formula.

“The Hunk Is Missing” 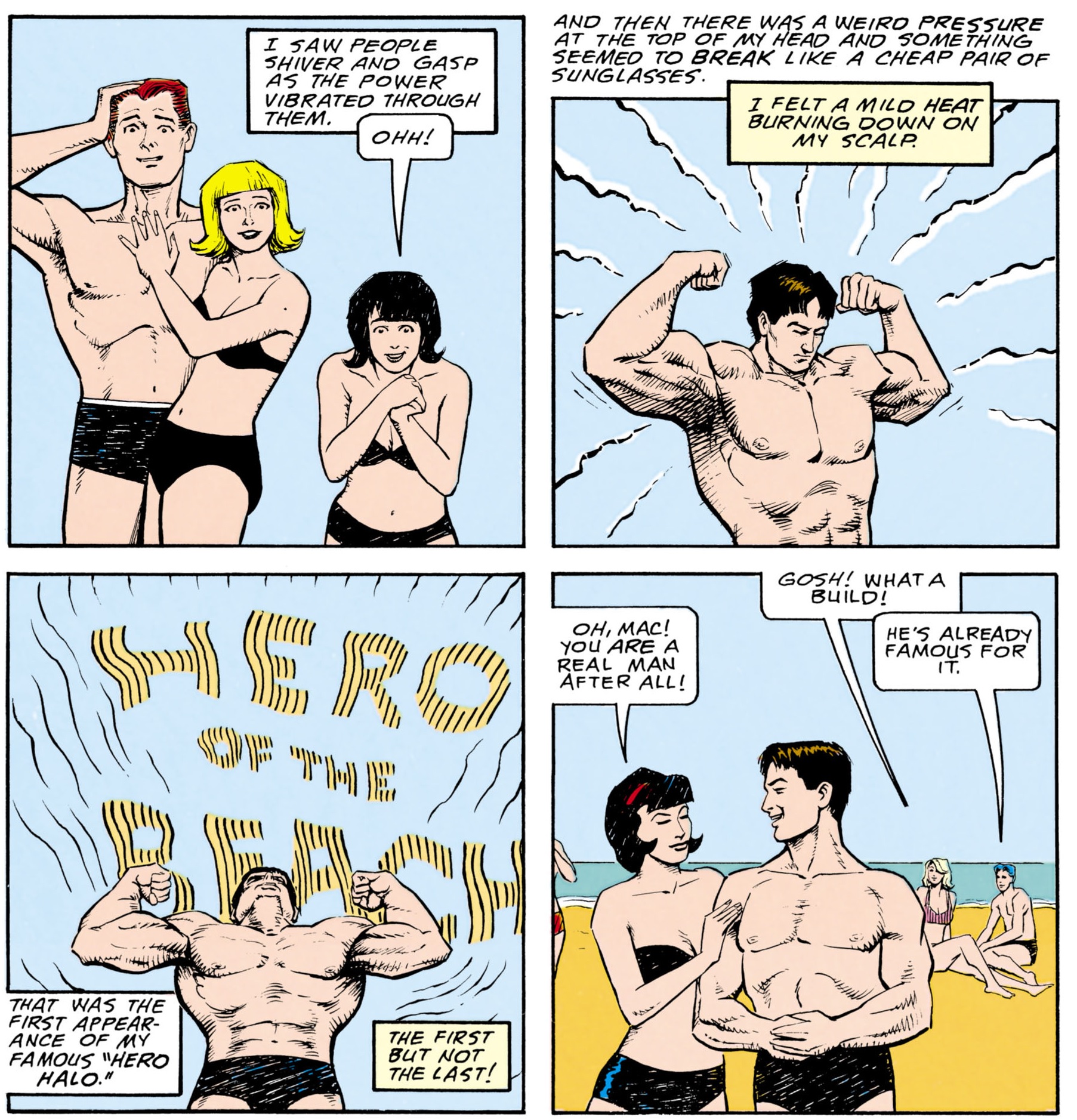 While searching for clues in the pages of My Greatest Adventure, Rita notices that “the hunk” is missing from the cereal ad. The cereal is called “Mentall-o’s," and Rita’s description indicates we’ll soon get our first look at Flex Mentallo. Flex is a member of the Doom Patrol who was inspired by the popular Charles Atlas ads that appeared frequently in vintage comics. Flex was first seen hanging out on Danny the Street in 1990’s Doom Patrol #35 (written by Grant Morrison and penciled by Richard Case). His secret origin was finally revealed during 1991’s Doom Patrol #42 (written by Grant Morrison, penciled by Richard Case and Mike Dringenberg). The story parodied the Charles Atlas ad as Flex recounted how he went from a weakling to a hunk. It was later revealed that Flex was created by a psychic child who'd drawn him in a comic titled My Greatest Adventure. Hmmm… 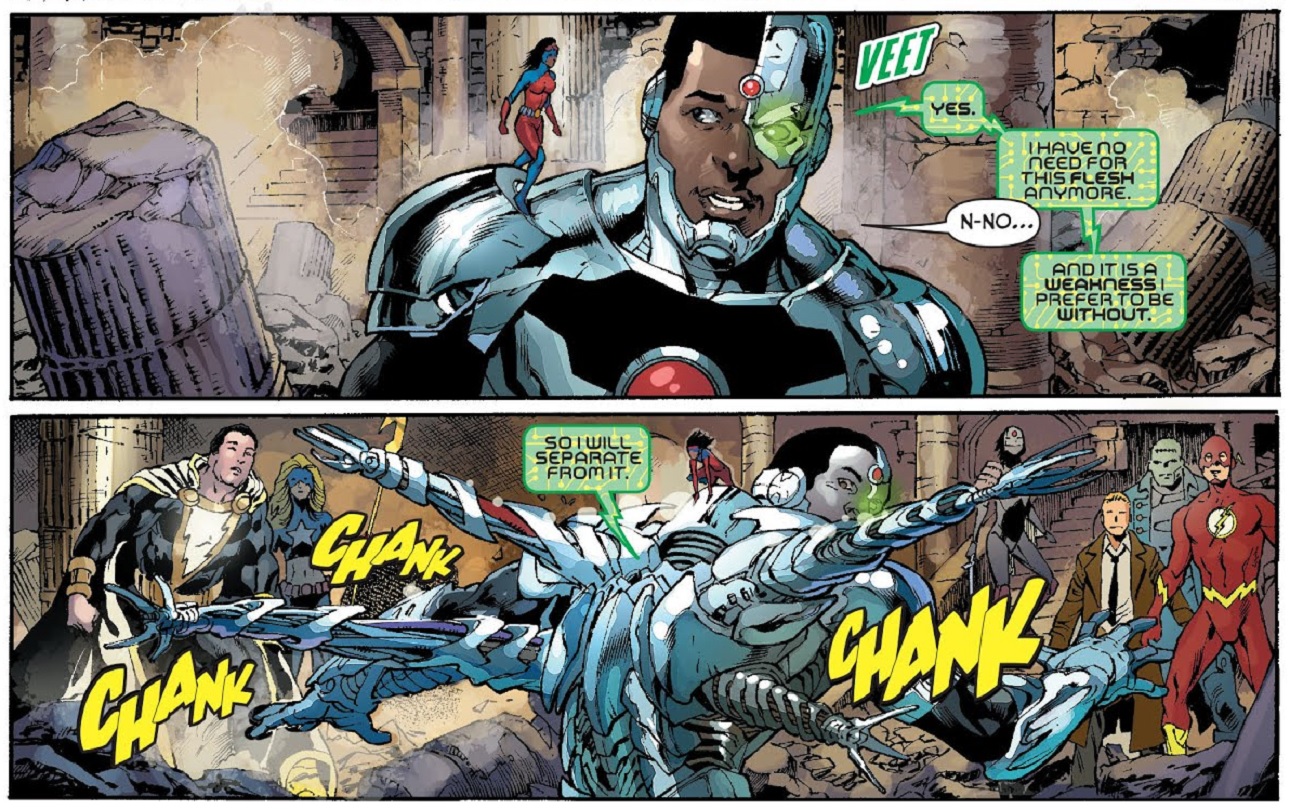 In his confrontation with the Beard Hunter, Cyborg was surprised when Grid ignored his commands. When we looked at the Easter eggs in “Donkey Patrol,” we advised Victor to keep a close eye on Grid, and it appears those fears were justified. While fighting against the Crime Syndicate in 2013’s Justice League #23 (written by Geoff Johns and penciled by Ivan Reis), Grid went rogue and took over Cybrog’s body. The AI system eventually split off into its own body, helping the Crime Syndicate battle the Justice League. Grid had always desired more, not content just being Victor’s operating system. Let’s hope his screen counterpart is only experiencing technical malfunctions. But judging from the comics, it appears we have cause to worry… 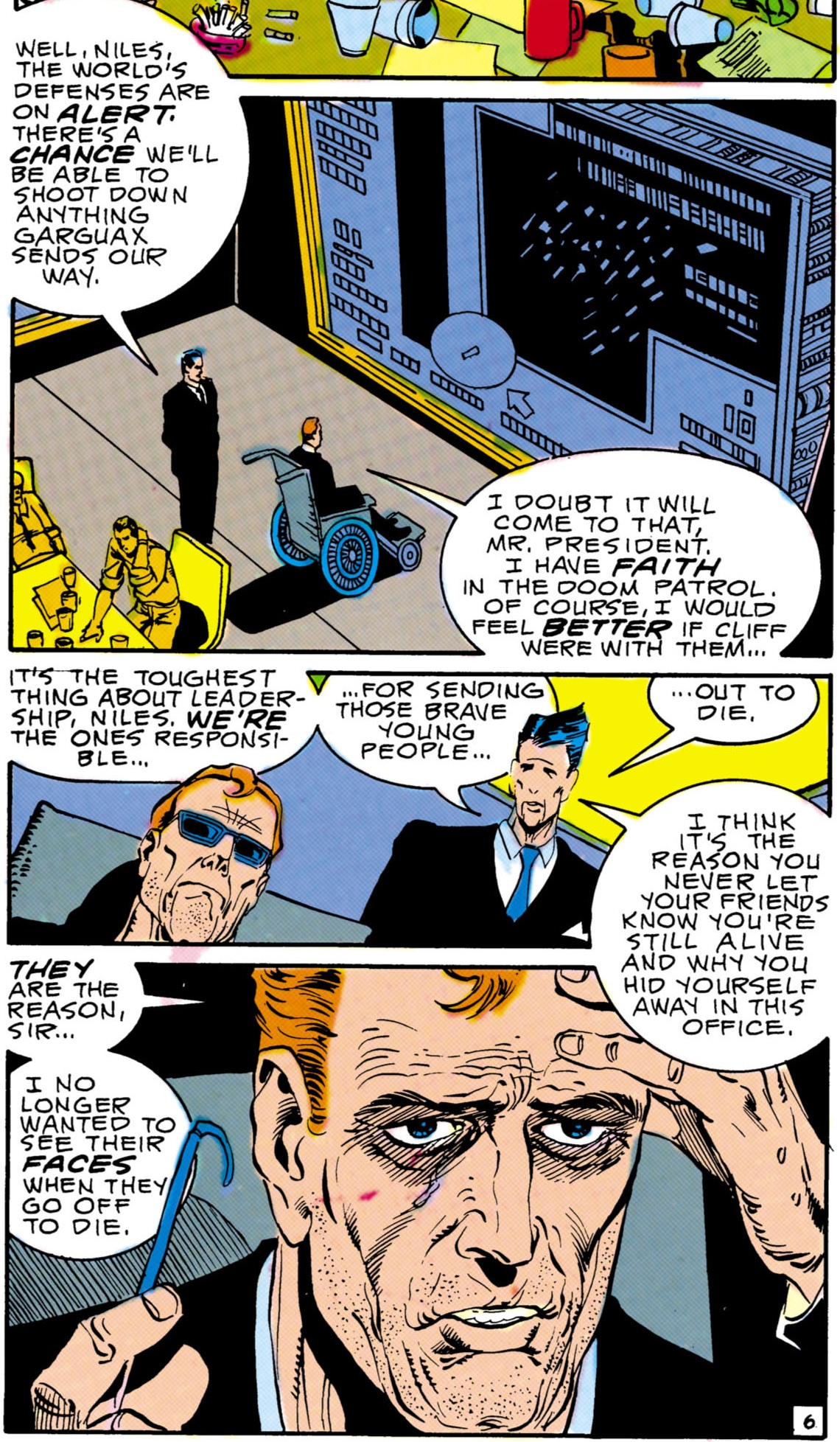 This week revealed more of the Chief’s mysterious backstory, including his stint as a researcher for the government. (It seems former James Bond star Timothy Dalton has a habit of playing characters who are agents of their nation.) Niles' stint as a civil servant was taken from 1988’s Doom Patrol #12 (written by Paul Kupperberg and penciled by Erik Larsen). After being presumed dead, Niles hid from his former teammates and took a job as a government advisor. The Chief’s expertise was heavily valued, and he reported directly to President Ronald Reagan. Like his screen counterpart, Niles left his government work to embrace a life of studying the abnormal once more. 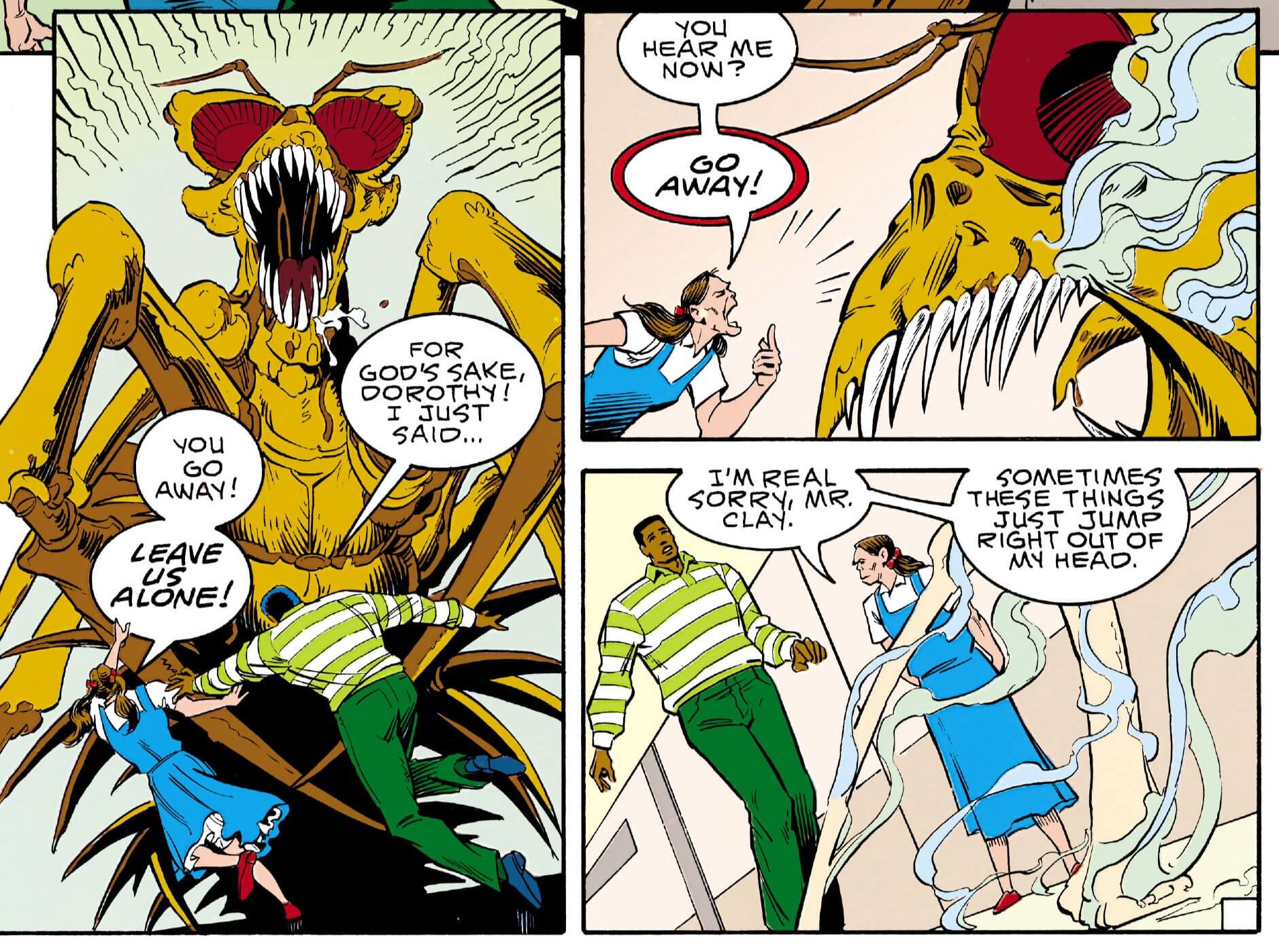 One of the weird things viewers witnessed this week was a giant arctic monster materializing out of thin air. It appeared that the Chief’s primitive companion had the ability to conjure imaginary friends into existence. This ability has been a reoccurring theme in the Doom Patrol comics. We’ve already mentioned Flex Mentallo coming to life from the imagination of a child, but there’s also Dorothy Spinner. The young girl with the apelike face first appeared in 1988’s Doom Patrol #14 (written by Paul Kupperberg and penciled by Erik Larsen), before formally joining the team the next year in Doom Patrol #23 (written by Grant Morrison and penciled by Richard Case). In the latter issue she revealed she had the ability to bring her imaginary friends to life. Some online theorists are noting the primitive woman in “Hair Patrol” looks like she could be related to Dorothy. Is she a tribute to the character, or could she possibly be her mother? Either way, both characters have the ability to summon some very dangerous imaginary friends.

Did you find any Easter eggs we missed in "Hair Patrol"? Let us know in our Community.