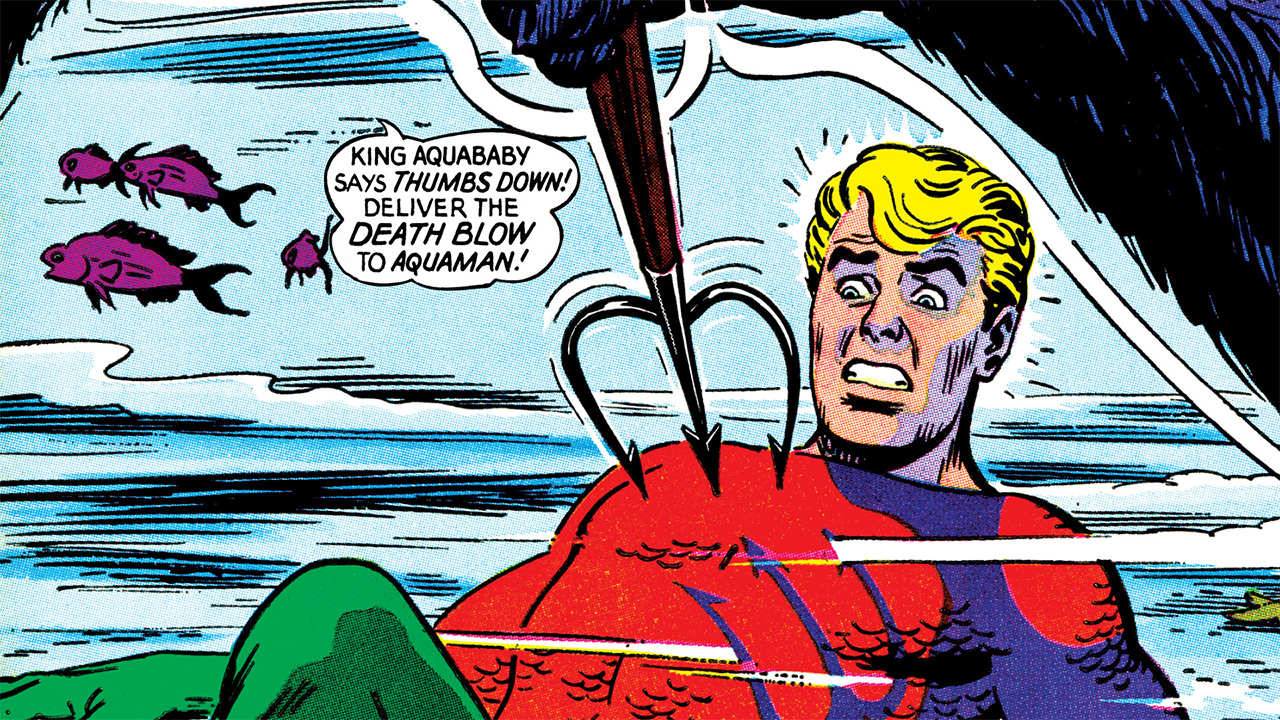 The 9 Most #Relatable Silver Age Covers

They say that art imitates life. For a mid-century youth growing up in a disillusioned, post-war America, it could often times be difficult to find a cultural voice which spoke to one’s own unique experience of ennui and uncertainty in an ever-changing world. But, luckily, as they were then as they are now, DC Comics provided the perspective and sympathetic voice needed, its greatest heroes echoing the deepest, truest sentiments of their times. Here are nine of the best examples of silver age comic covers peeking out of news stands which helped an isolated young America realize that maybe, just maybe, they weren’t so alone in the world... 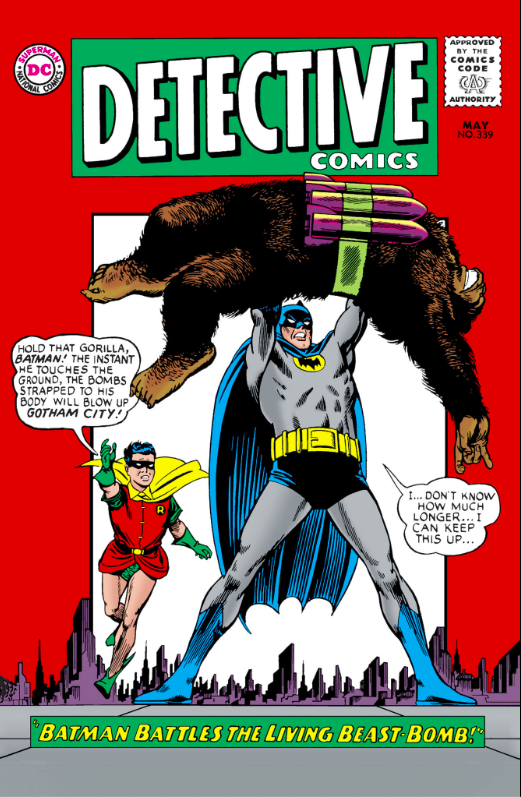 A wise man once said that “Some days, you can’t get rid of a bomb.” In 1965, Detective Comics #339 showed thousands of readers struggling to keep explosive gorillas constantly lifted above their heads all day that they weren’t alone in their struggle. The Caped Crusader, too, had his own bomb-strapped ape to deal with, and by god he kept that ape hoisted to the red Gotham skies. His wide, mighty stance also functioned as an educational tool to the ape-lifting audience, showing them to lift with their legs, not with their back. 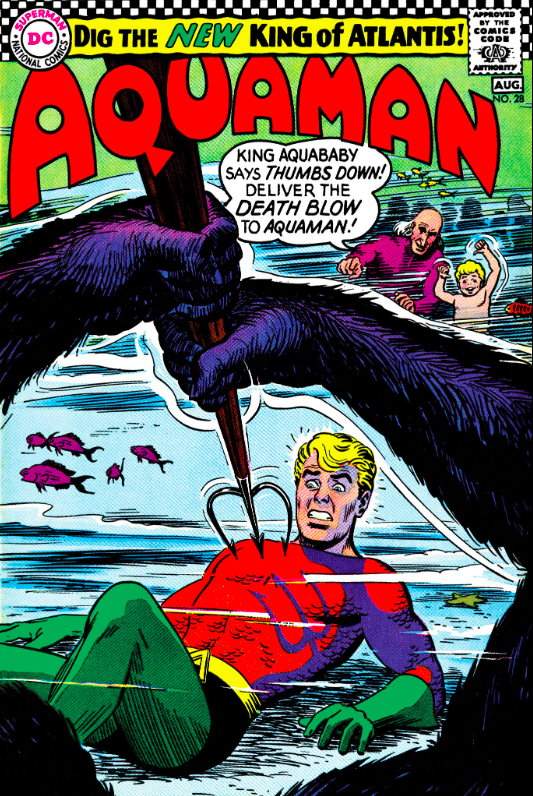 Who can forget when, in 1966, US President Lyndon B. Johnson abdicated the executive branch to a bloodthirsty baby? It’s a dark chapter of US history for which we as a nation may never atone. In Aquaman #28 even the King of the Sea finds himself subject to the whims of a sadistic tot, all-too-realistically mirroring the crisis in America of the death matches being enacted for President Baby’s amusement. In retrospect, it was perhaps works of culture like this issue's "Hail Aquababy, New King of Atlantis!" which allowed the American people to realize just how dire our situation was, and challenge the authoritarian infant who held a nation captive. 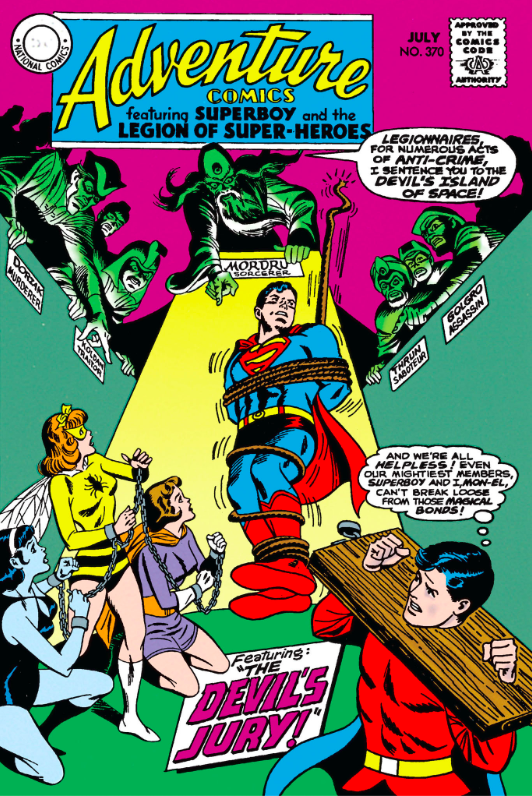 With its tales of the 30th century Legion of Super-Heroes, Adventure Comics was the place for young writers like Jim Shooter to express their grave warnings of the way society may soon be headed if we don’t become more conscious of our misdeeds to the environment and one another. Adventure Comics #370 is the perfect example, presenting a grim future where morality has become so corrupt that upstanding citizens are punished not for committing crime, but anti-crime. Their judges? Murderers, traitors, and assassins. Too horrifying to believe? Perhaps. But then again, with the recent astronomical discovery of the Devil’s Island in Space, perhaps Shooter wasn’t too far off the mark… 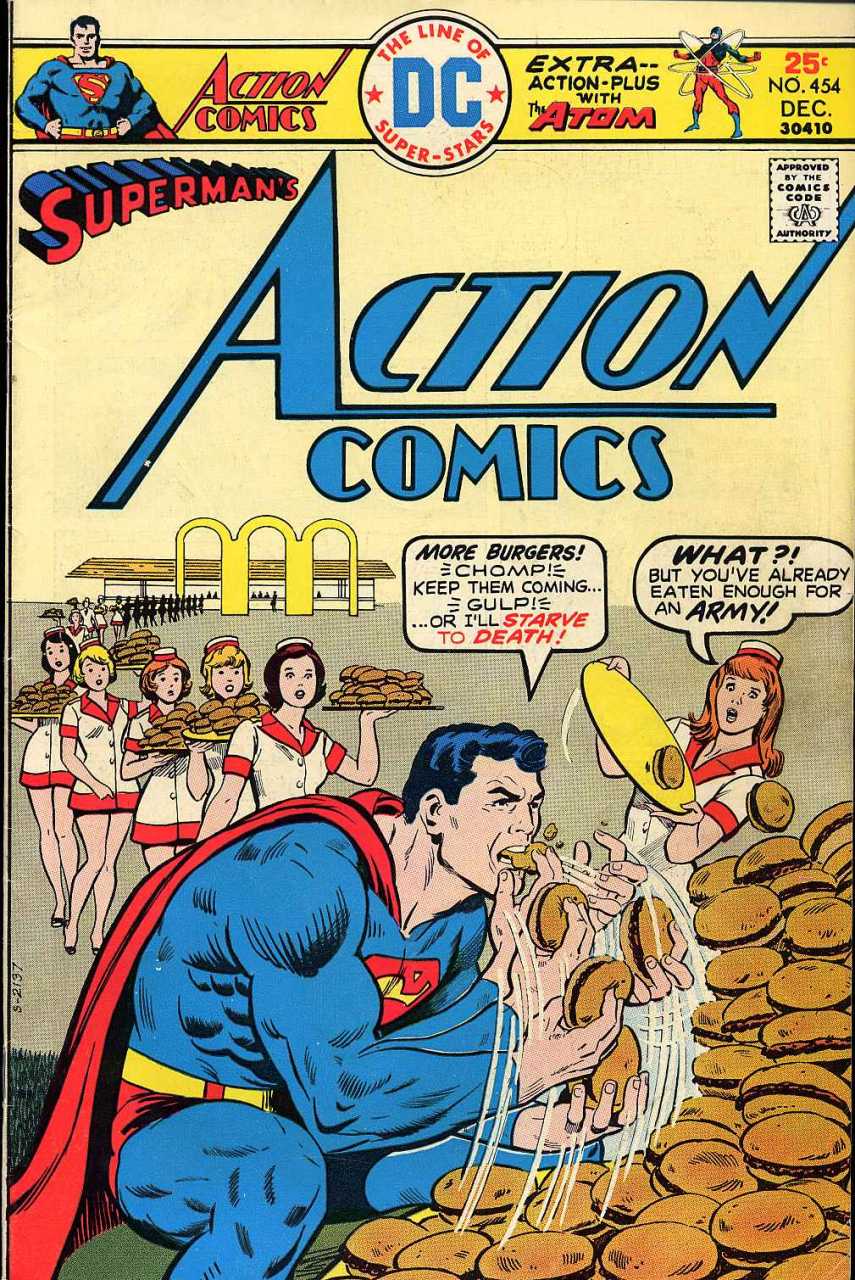 Some adolescent worries, of course, are timeless. Growing, changing bodies. New, unfamiliar urges. And then, of course, there’s the Hamburger Haze: that 90-day period in every young person’s life where they become all-consumed by the desire to eat an endless amount of hamburgers, and are bestowed by nature with the boundless capacity to do so. With their effortless strength of will, no superhero could possibly relate to this all-too-human struggle… or could they? In Action Comics #454, Superman showed the burger-craving teens of the world that they were not alone. That despite outdated conservative education to the contrary, the Hamburger Haze was real. And if we don’t keep them coming, we’ll starve to death. 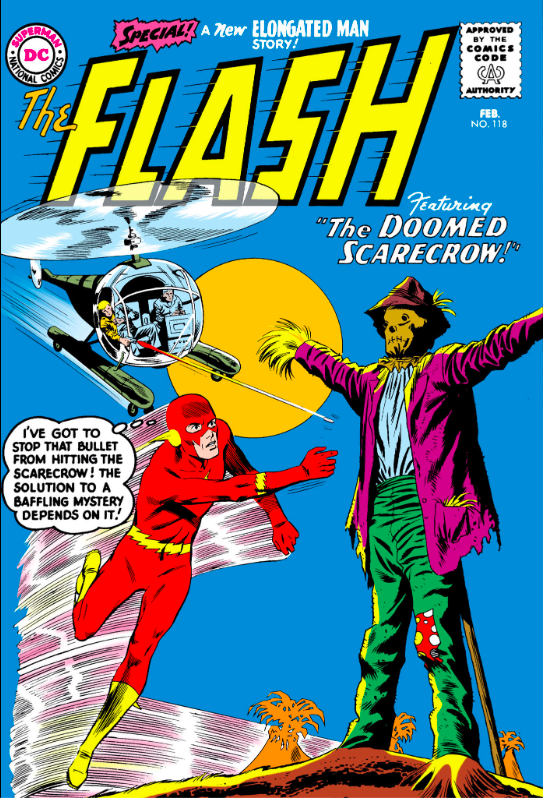 Be honest, mystery solvers: how many times have you been stopped in the middle of an investigation, only to find your pursuit of the case as viewed by the outside world to be more bizarre than the mystery itself? These compromising positions have long been the bane of amateur and professional detectives alike, never sure what to say in the moment. Fortunately, this cover to The Flash #118 cracks it wide open. If ever asked to explain yourself for any reason, no matter what you happen to be doing, just follow Barry Allen’s example. Just tell them, with the greatest sense of urgency you can muster, “The solution to a baffling mystery depends on it!" And sure enough, you’ll be left alone and on your way to solve that mystery in a flash. 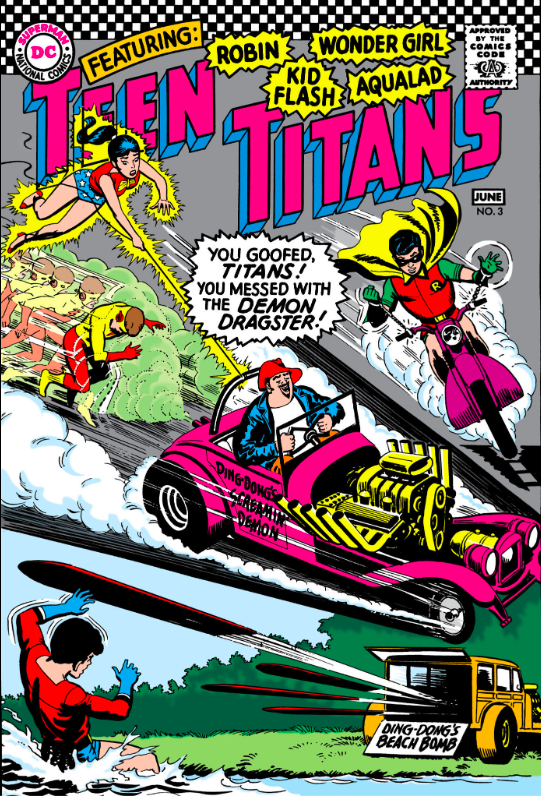 This is just a cool thing to say any time you’re victorious in any sort of group activity. The next time you win a game, you’ll be the hit of the gathering is you 1.) find a nickname for your group, 2.) find a nickname for yourself, and 3.) apply them. Maybe you call yourselves the “Good Time Boys.” And maybe your nickname, or the nickname you desire for yourself, is “Slippery Sal.” Gather the gang in for a high stakes game of cribbage, or tiddlywinks. Upon your assured victory, simply cry: “You goofed, Good Time Boys! You messed with Slippery Sal!” Even if neither nickname applied before, they sure as heck will now. And with names always comes power. Something that Teen Titans #3 knew all too well. 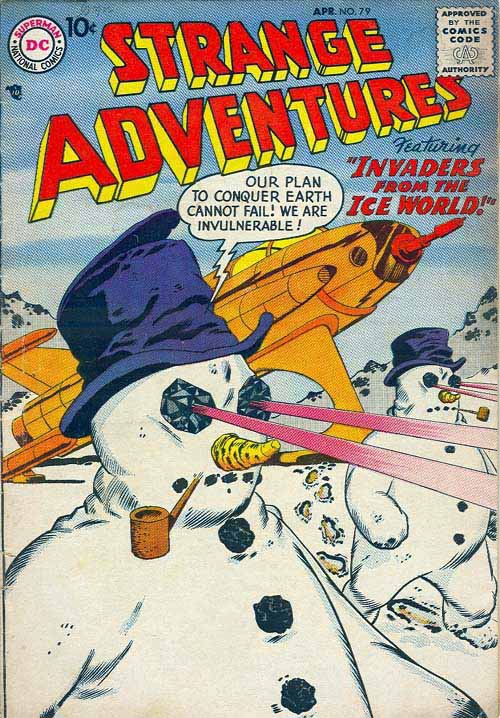 Strange Adventures #79 is the most perfect comic book cover ever made. Drawn by the great Gil Kane, everything you need to know is right there. Never has there been a more perfect depiction of hubris in any medium, so succinctly, so purely. A universal image which cries out to all the folly of ego. It belongs in a museum. 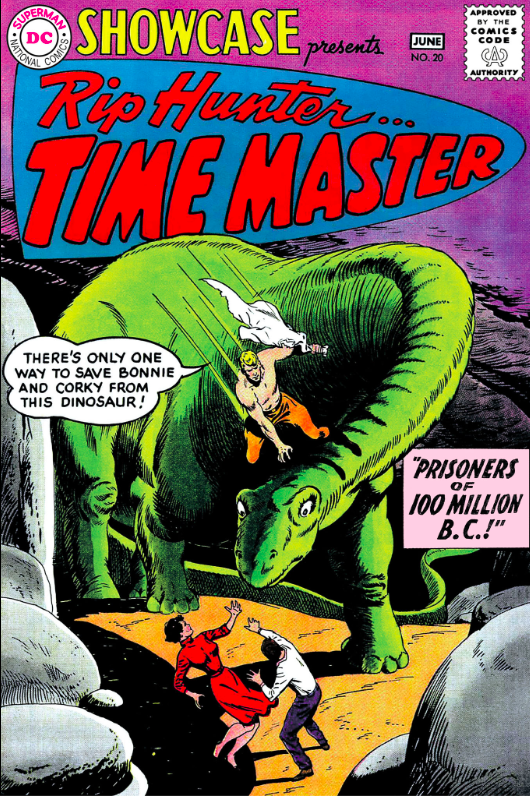 We all went through the drills in high school, and it’s an understatement to say that those exercises saved many of our lives. Today, it’s common knowledge that there’s only one sure way to save yourself and your loved ones in case of a dinosaur attack. But in 1959, the education system wasn’t as rigorous about dinosaur drills as we thankfully are today. Fortunately, educational tools like Showcase #20 existed to show young readers the correct course of action in case confronted with a creature from 1,000,000 B.C. We all know, of course, that there’s only one way to save Bonnie and Corky from this dinosaur. But do YOU? 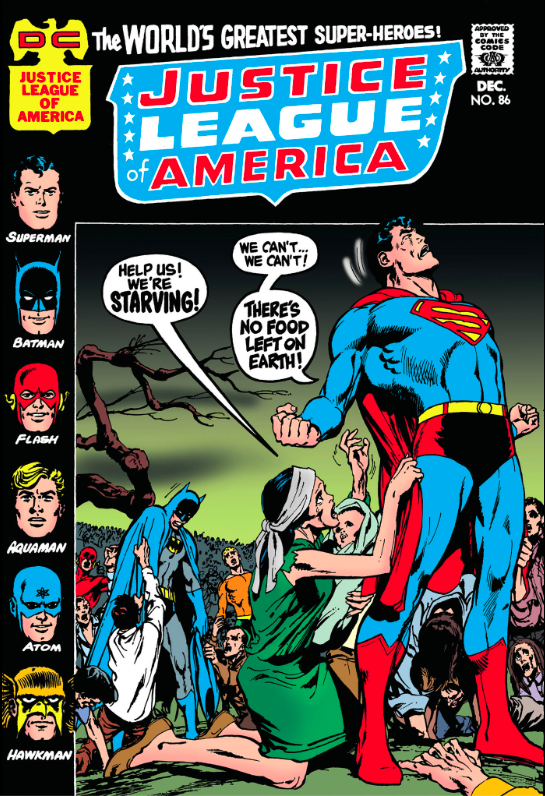 #tfw you open the pantry and you’re out of peanut butter crackers. Thank you, Justice League of America #86. We feel seen.

What important life lessons have you learned via a Silver Age comic book cover? Let us know in our Community!