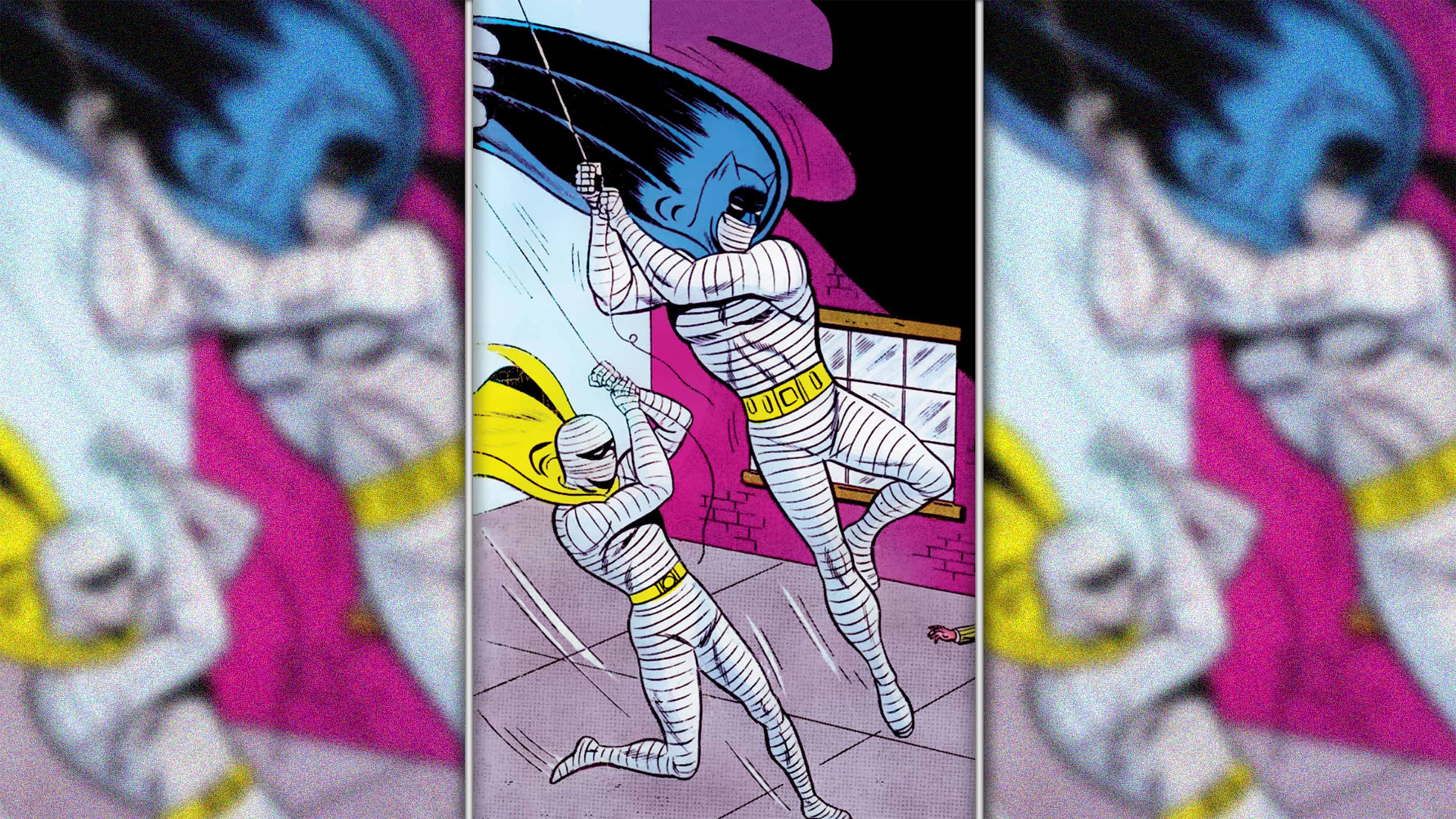 Director Matt Reeves recently gave us our first look at the Batsuit that Robert Pattinson will be wearing in next year’s The Batman, and the gears haven’t stopped turning in our heads. Past Batman movies have featured more than one Batsuit, so it’s of course possible that Pattison could rock an additional costume in his film. But there are some we can probably rule out. Here are 9 Batsuits we probably won’t see the actor wear. 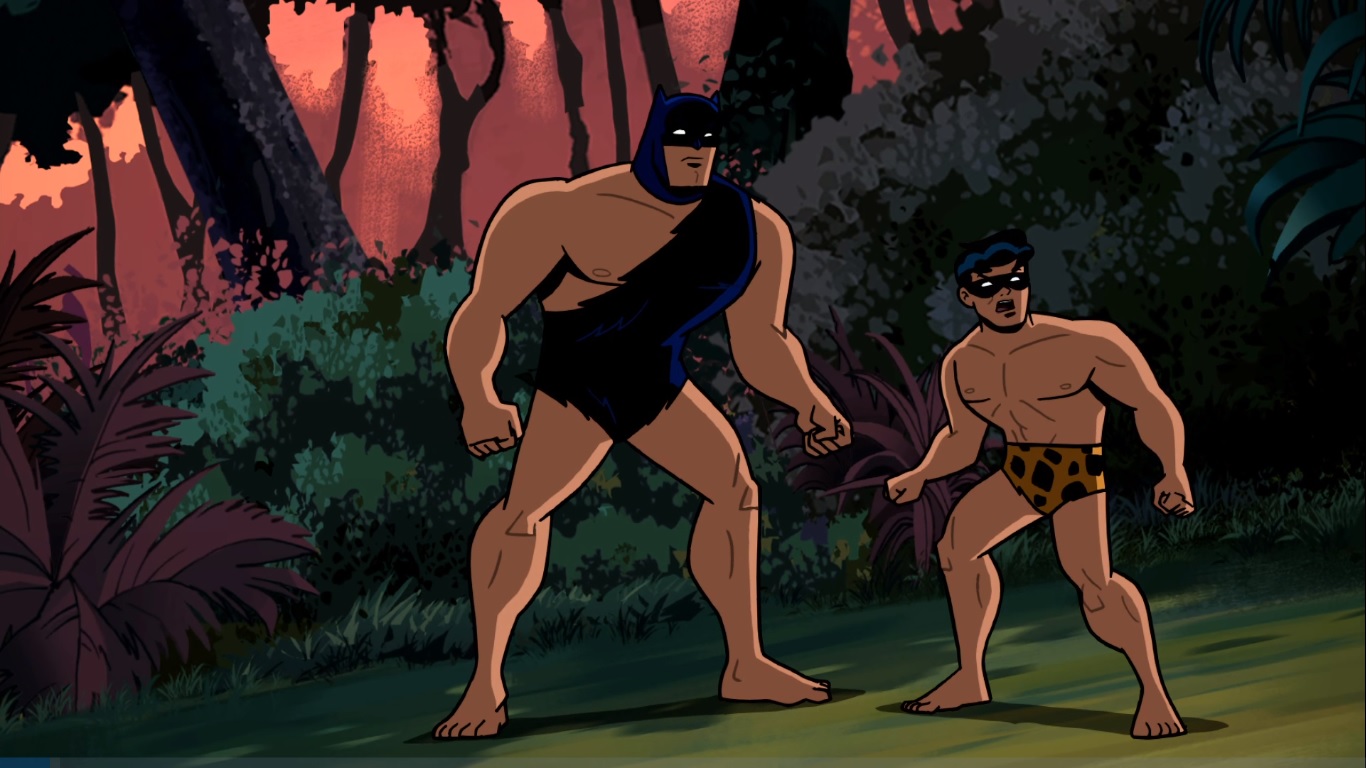 Notable Features: It’s a Tarzan costume with a Batman mask. You all made fun of the George Clooney costume for having nipples on it, but this outfit actually exposes Batman’s nipples decades before Clooney’s first wardrobe fitting.

Why He Wore It: Catwoman gave Batman this costume so she could hunt him in the jungle. It’s possible it was just a pretense to see her beloved Dark Knight show off his bod.

Why Pattinson Probably Won’t: Robert Pattinson is already too sexy. If he shows too much skin in the movie, adoring fans might faint and miss the entire film. 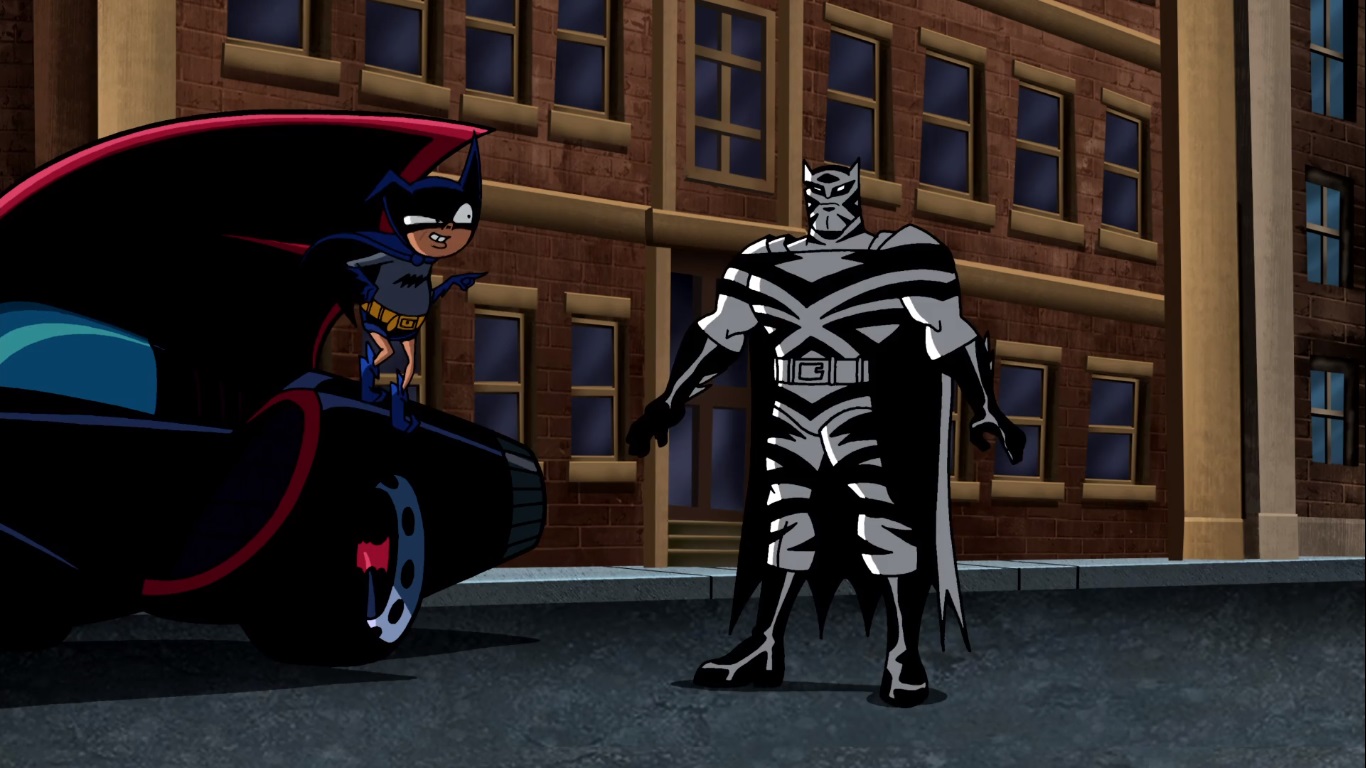 Notable Appearance: Detective Comics #275 and Batman: The Brave and the Bold  "Legends of the Dark Mite.”

Notable Features: It’s a Batman suit covered in zebra stripes, and it causes Batman to repel any piece of matter he comes in contact with. Disappointedly, this costume has nothing to do with actual zebras.

Why He Wore It: Batman was zapped by a mad science machine (a common problem in the 1950s) which caused energy waves to change his appearance. What does this have to do with zebras? Absolutely nothing.

Why Pattinson Probably Won’t: If the costume doesn’t have anything to do with zebras, is there even a point? 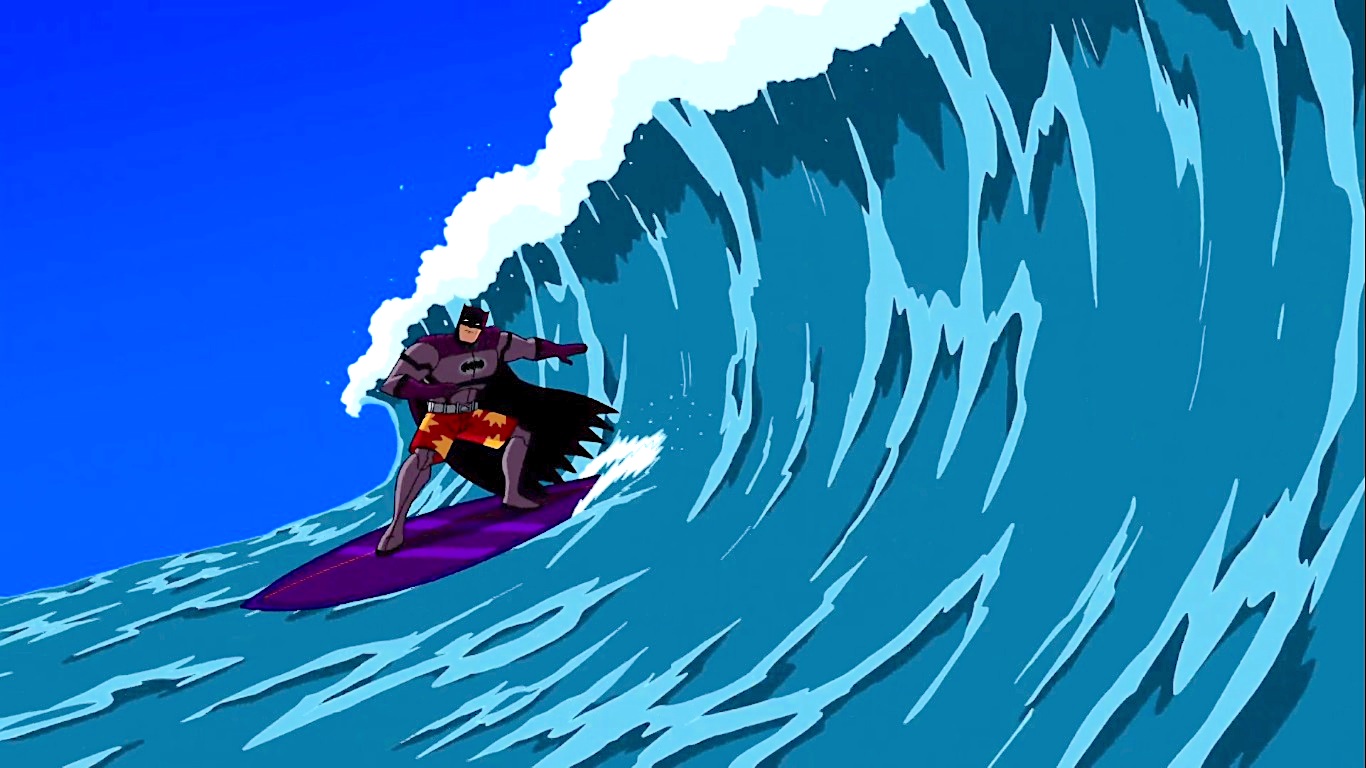 Notable Appearance: The 1967 Batman episode “Surf’s Up! Joker’s Under!” and the Batman: The Brave and the Bold episode “Mitefall.”

Notable Features: It’s the regular Batsuit…but with a bathing suit over it. Y’know, in case Batman gets wet.

Why He Wore It: Batman was challenging Joker to a surfing contest, and you can’t go in the water without a bathing suit, that would be indecent.

Why Pattinson Probably Won’t: It turns out that wearing a bathing suit over a superhero costume serves no purpose. 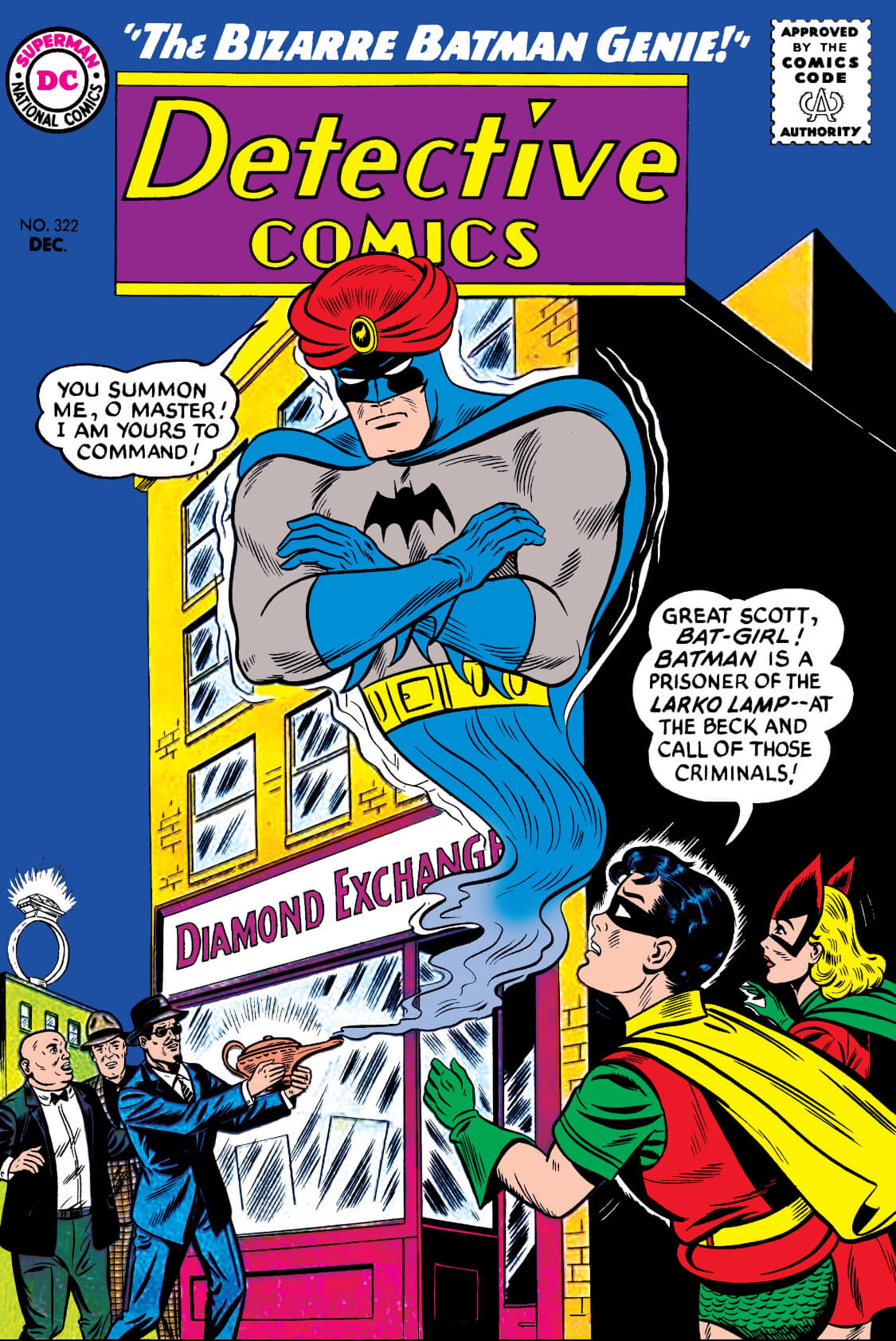 Notable Features: The Bat Cowl is covered by a turban, and his legs have been replaced by an astral genie-tail.

Why He Wore It: Criminals used a magic lamp to turn Batman into a genie. Stop looking at us like that, we swear that’s exactly what happened!

Why Pattinson Probably Won’t: Will Smith already played a genie last year, and the Bat-Pattinson is no copybat. 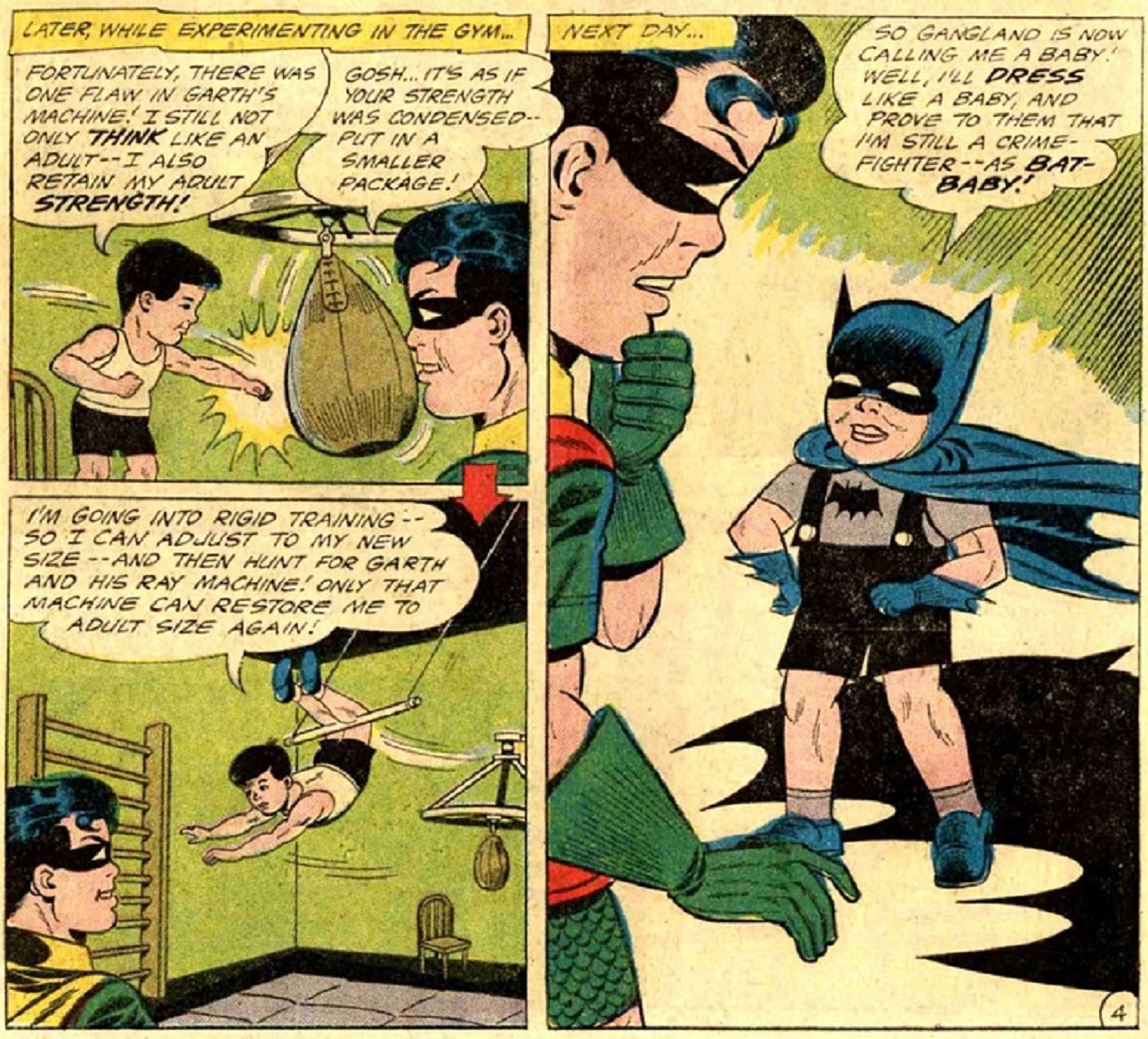 Notable Features: The overalls are so freaking adorable. Normally Batman is suppose to strike fear into the hearts of criminals, but this little guy is a sweet potato pie.

Why He Wore It: A mad scientist zapped Batman with a ray that reverted the Caped Crusader to toddlerhood. Batman figured he might as well embrace it, and went all in on the outfit design.

Why Pattinson Probably Won’t: Would you be able to keep a straight face if Robert Pattinson wore this for two hours? The next Batman movie probably isn’t a comedy, so this suit is likely staying in the nursery. 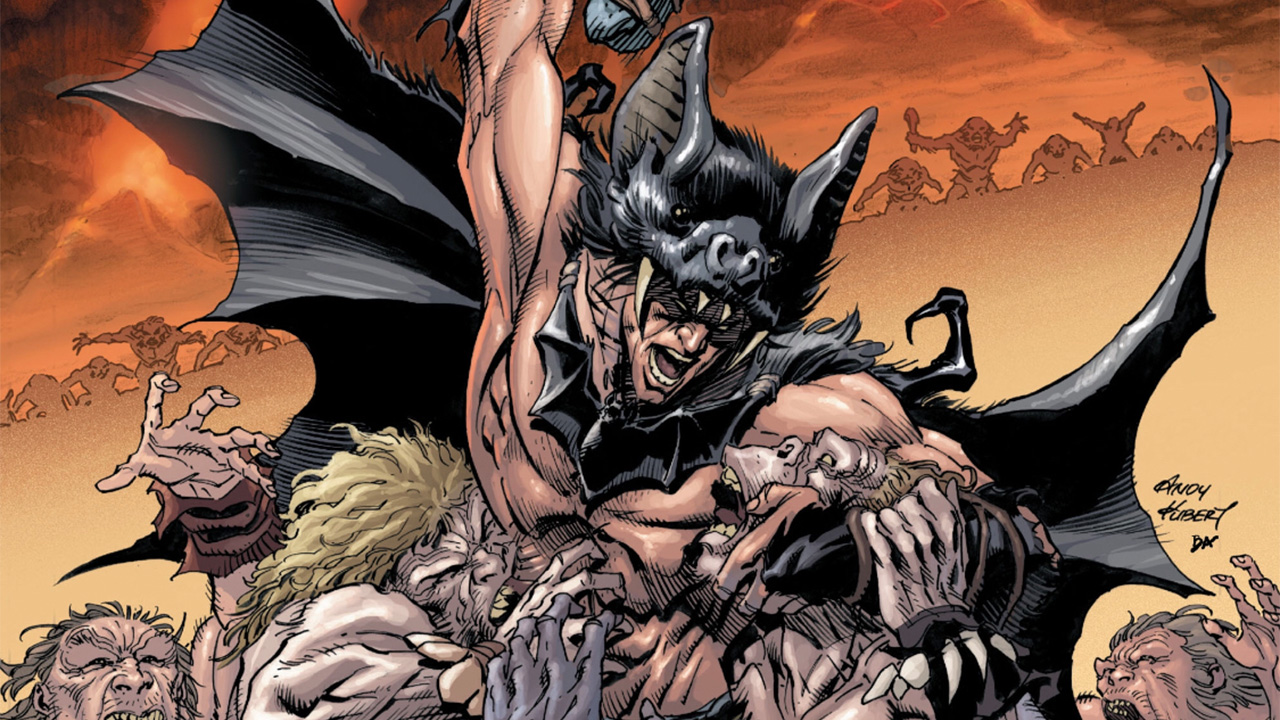 Notable Appearance: Batman: The Return of Bruce Wayne #1 and Batman: The Brave and the Bold episode “Time Out For Vengeance.”

Notable Features: It’s the carcass of a giant dead bat. How hardcore is that?

Why He Wore It: Bruce Wayne had been sent to the dawn of mankind, and there was no Alfred around to make a suit for him.

Why Pattinson Probably Won’t: They have to save something for the sequel. 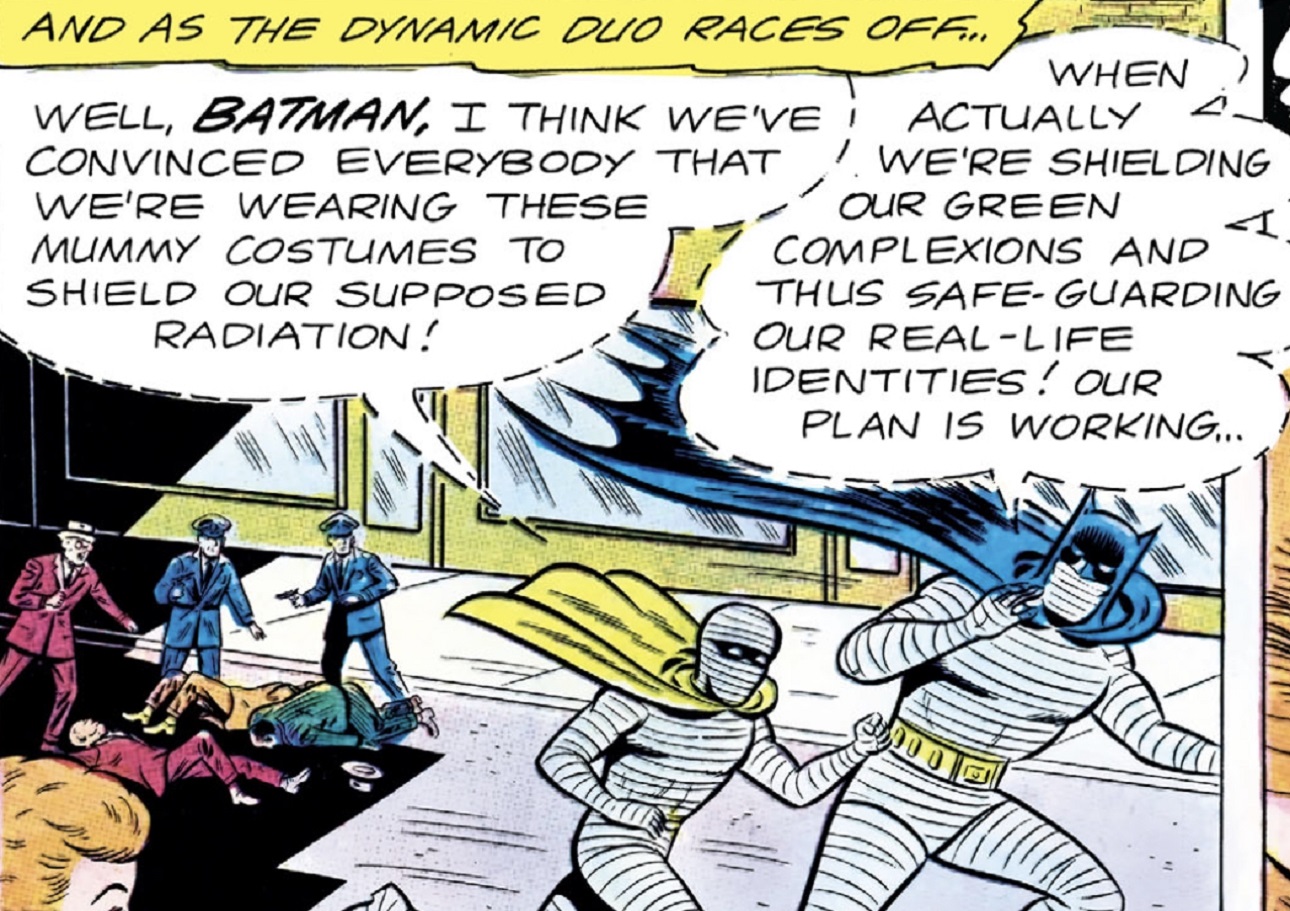 Why He Wore It: This one is a bit complicated. Bruce Wayne and Dick Grayson got exposed to an alien capsule, which turned their skin green. Since the public knew Bruce and Dick had green skin, they had to figure out a way to hide Batman and Robin’s complexion. The Dynamic Duo staged an elaborate ruse where they pretended they were bathed in deadly radiation, and had to wear bandages as a result.

Why Pattinson Probably Won’t: It would be a crying shame to cover up Pattinson’s features under bandages. 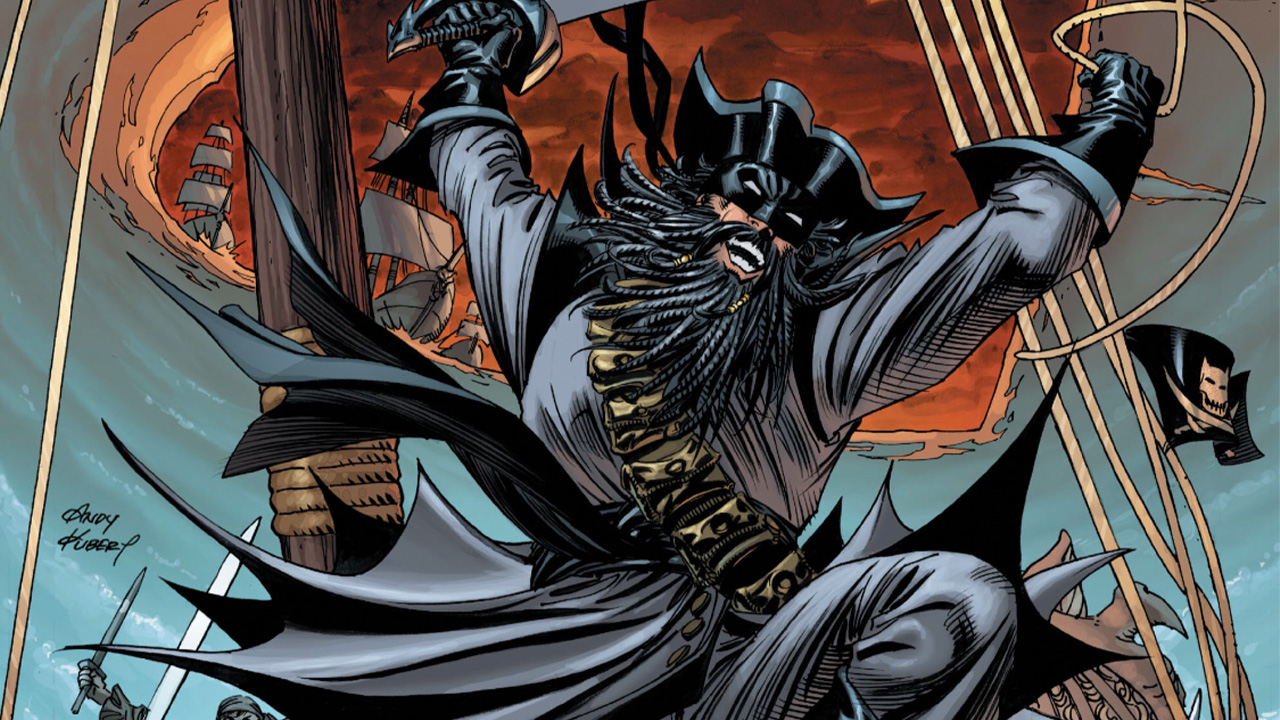 Notable Appearance: Batman: The Return of Bruce Wayne #3 and Batman: The Brave and the Bold episode “Time Out For Vengeance.”

Notable Features: An awesome pirate hat, and a cool black beard, and a pirate Bat-sword. This ensemble totally slaps.

Why He Wore It: Bruce Wayne was going through different time periods after being zapped by Darkseid. Unfortunately the costume he donned in the actual story wasn’t as cool as the one he wore on the cover.

Why Pattinson Probably Won’t: It wouldn’t be fair to the other movies coming out. People are already excited about seeing the next Batman movie, but if you add pirates to it, it would be guaranteed to break 2 billion. Warner Brothers has to give other movies a fair chance to succeed.

Why He Wore It: This outfit was handy for snow camouflage. Robin took things one step further and bleached his hair and legs. The Boy Wonder commits!

Why Pattinson Probably Won’t: Have you ever tried wearing white in a city as dirty as Gotham? There’s a reason Power Girl never visits.

Which of these suits would you like to see Robert Pattinson wear? Let us know in our Community!