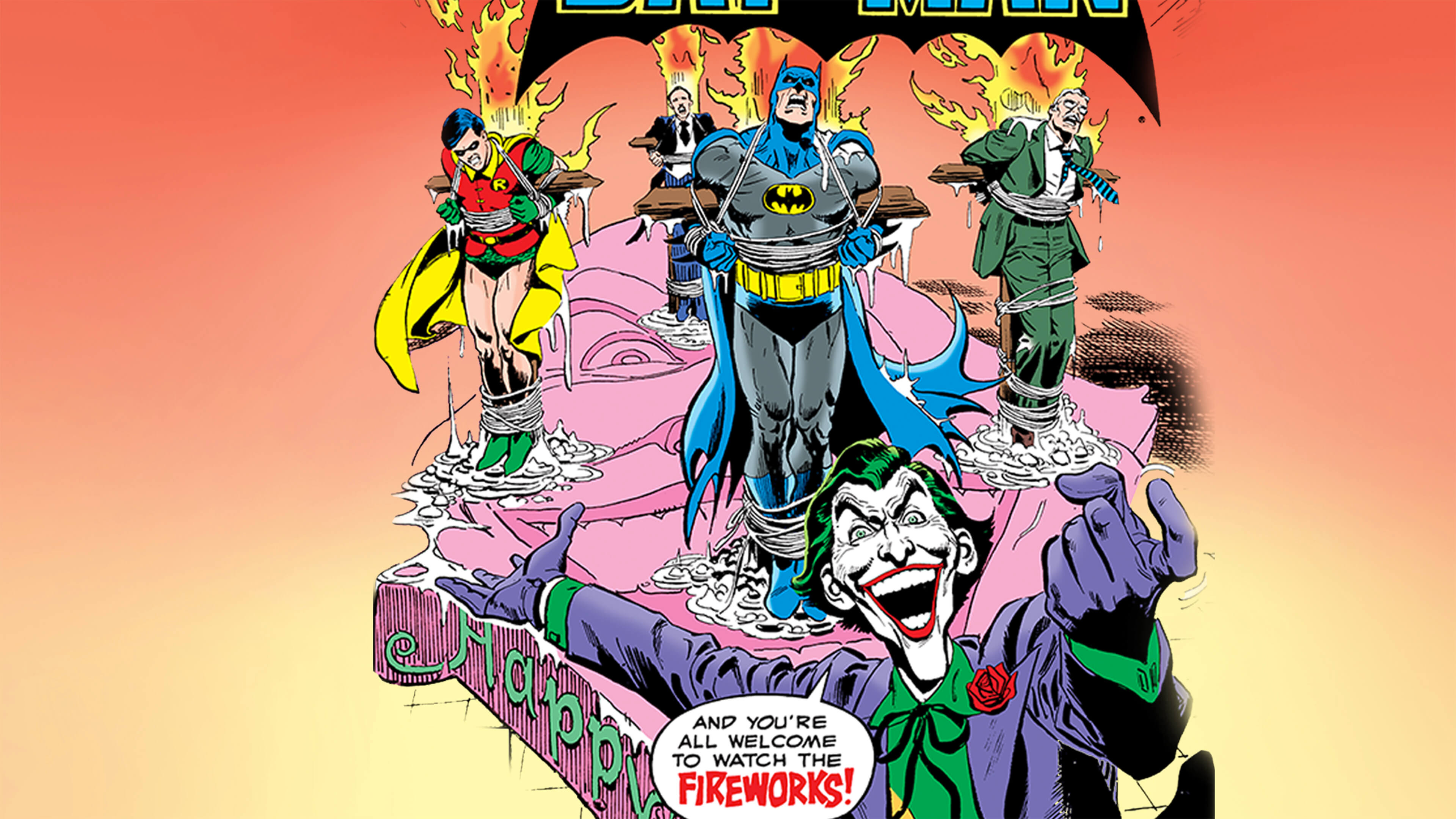 80 Ways the Joker Has Murdered Someone

Knock knock. Who’s there? Hopefully not the Joker, because then we’d be in big trouble. Murder is the Joker’s hobby, and we don’t want to be on the other side of that door when he’s the one who knocks. Sorry Walter White, but Joker is the danger! In honor of Joker’s 80th anniversary, we’re taking a look at 80 different ways the Clown Prince has murdered someone. From Joker Venom to raining knives, here are 80 Joker murders. 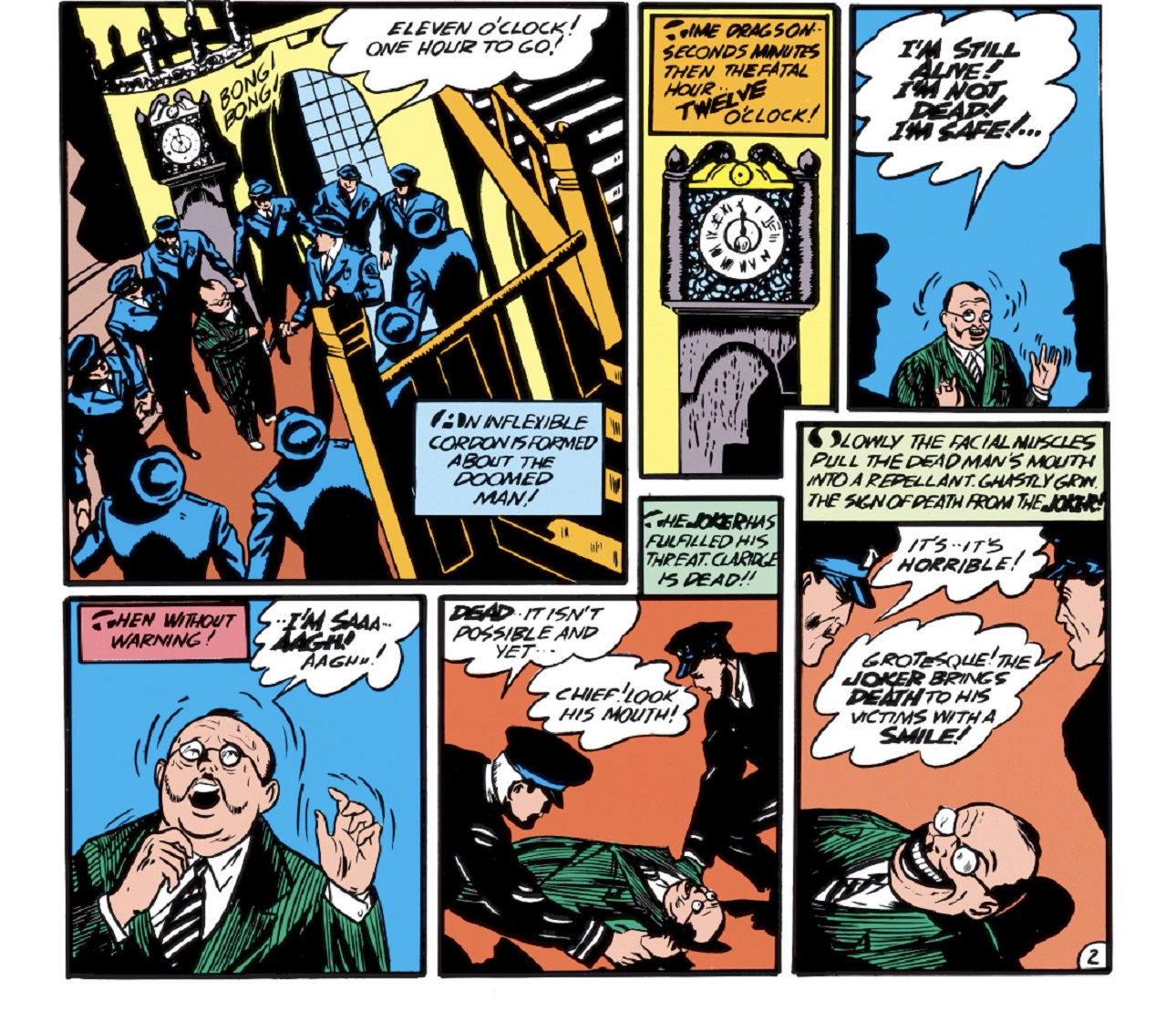 7) Killed a comedian by releasing poisonous gas from a balloon. The Joker’s last murder for over 30 years (1942’s Detective Comics #62).

9) Skinned a Gotham elite named Rupert, then wore his skin as a mask (Harley Quinn episode 1, “Til Death Do Us Part”). 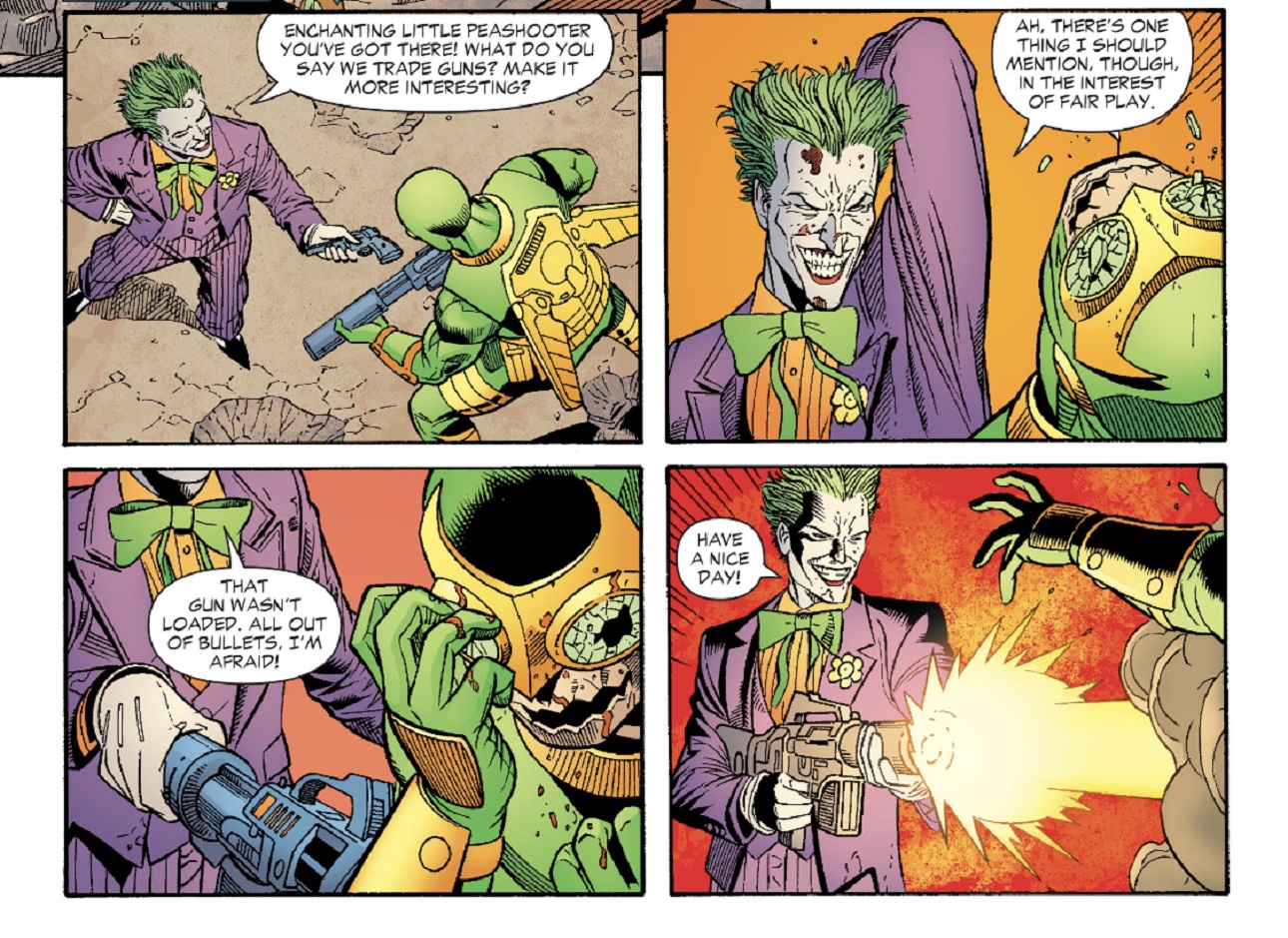 12) Tricked a Parademon into giving him his gun, then shot him with it (Salvation Run #7).

13) Killed his own lawyer and some Arkham guards by hiding poisonous gas inside a Bible (Robin II: Joker’s Wild #1).

15) Turned Multi-Man into ice then shattered him (Joker: Last Laugh #1).

16) Strangled his henchman Jahan because he thought he was a jinx (Justice League International Annual #2).

20) Detonated an acid bomb he had placed inside a Batman impersonator (2013’s Batman and Robin #16).

22) Killed a former henchman with an exploding cigar (Batman #251).

27) Poisoned Felua, an Atlantean who befriended him (Legends of the DC Universe #27). 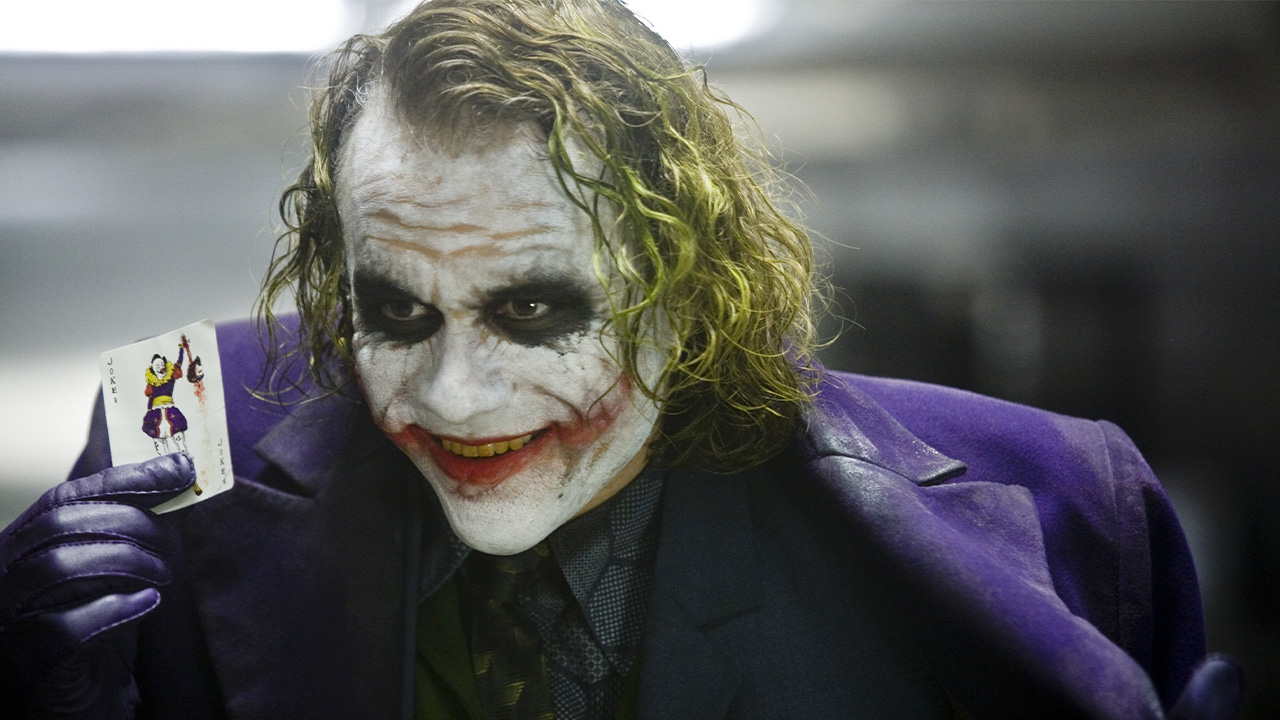 31) Made a pencil disappear into a man’s skull (Christopher Nolan’s The Dark Knight).

33) Exploding cellphone in a goon’s stomach (Harley Quinn episode 1 “Til Death Do Us Part”).

34) Shot a fast food manager for getting his order wrong (Detective Comics #826).

35) Created a CD that melts into a poisonous gas when put in a CD player (Batman: Dark Detective #3). 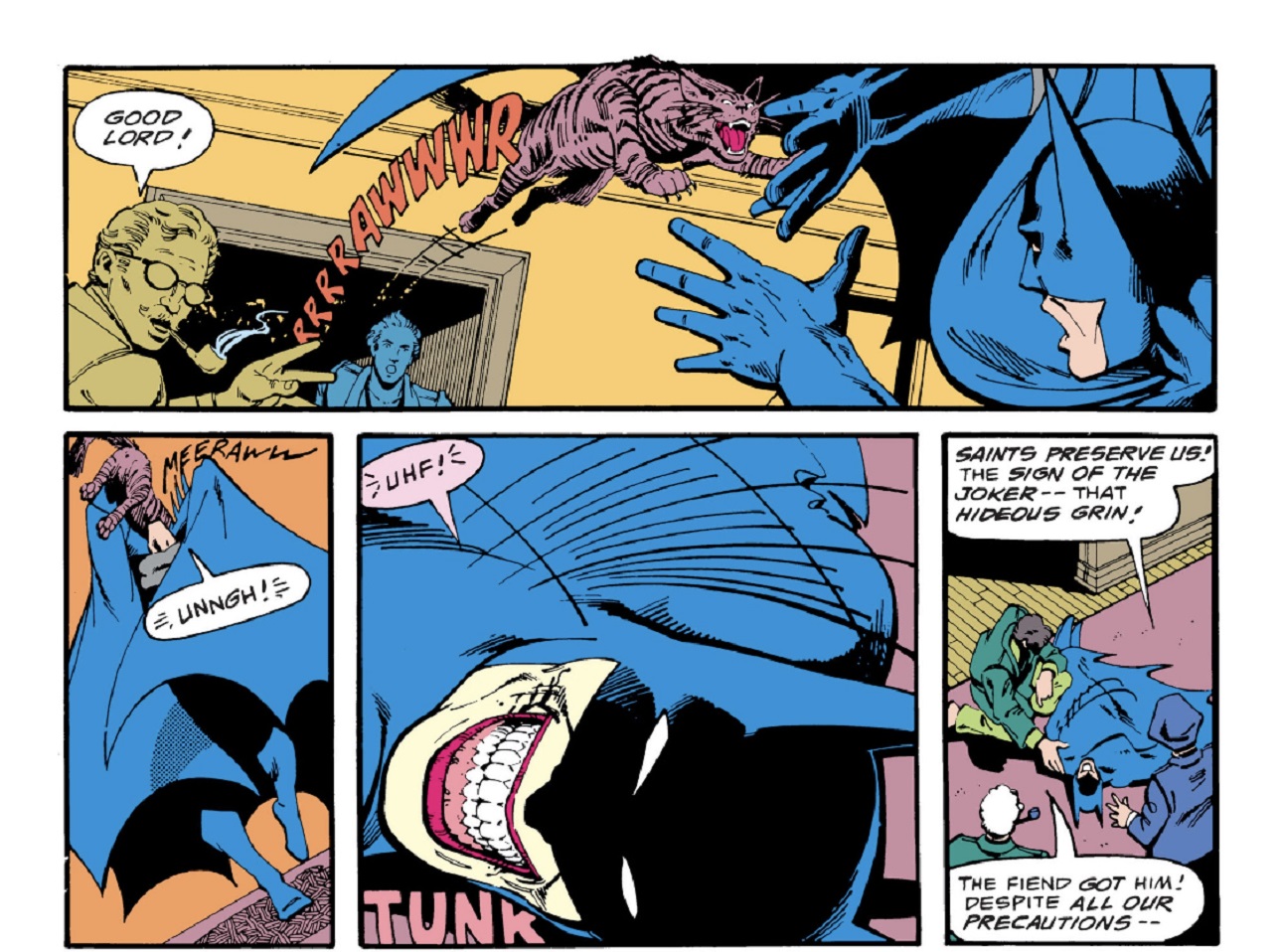 36) Poisoned a cat’s fangs and claws, then sent it after its owner (Detective Comics #476).

38) Gouged out the eyes of a security guard (Arkham Asylum: Madness).

39) Impersonated a magician, and then cremated his assistant during a performance (Detective Comics #833).

45) Silenced a witness by shooting a poisoned lace pea-pop at his neck (The Joker #4).

47) Unleashed flamethrower on Gotham’s elite (Harley Quinn episode 1, “Til Death Do Us Part”).

48) Hid a poison dart inside a telephone. Called an officer, and screamed “Joker” loudly, causing the dart to fire into the man’s head (1940’s Batman #1).

51) Put a shrinking straightjacket on a psychiatrist, crushing the doc’s ribcage (Joker #10).

52) Activated a killer Jack-in-the-box to smash a henchman with a mallet (Detective Comics #532).

57) Impaled an officer’s chest with a pencil. A different version of the trick Heath Ledger's Joker did (Batman Confidential #10). 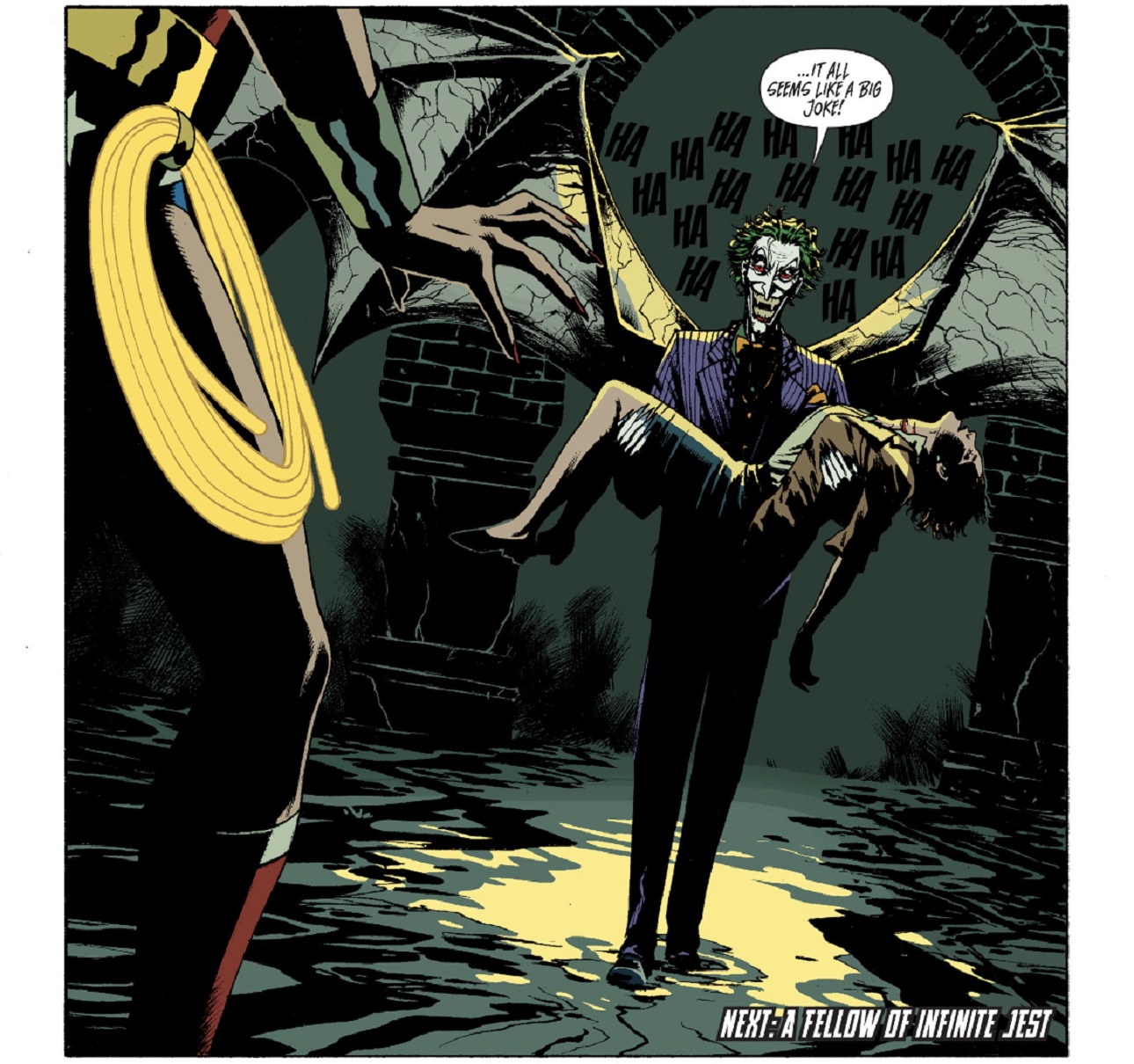 58) Turned into a vampire and bit Etta Candy’s neck, draining the blood from her body (Convergence: Wonder Woman #1).

59) Put poisonous gas in the tank of a motorcycle, causing the exhaust fumes to kill a criminal (The Brave and the Bold #191).

61) Booby-trapped stairs to send a SWAT team sliding down into a pit of spikes (Batman: Dark Detective #6).

62) Juggled some balls in a parade. Threw the balls at the audience. The balls exploded (Batman: Legends of the Dark Knight #65).

67) Locked his followers in a room, and pressed a button that set everyone in the room ablaze (Gotham episode “One Bad Day”).

68) Disguised himself as a window washer, and cleaned the window with a gun instead of a brush, killing the business people on the other side (Batman: Dark Victory #8). 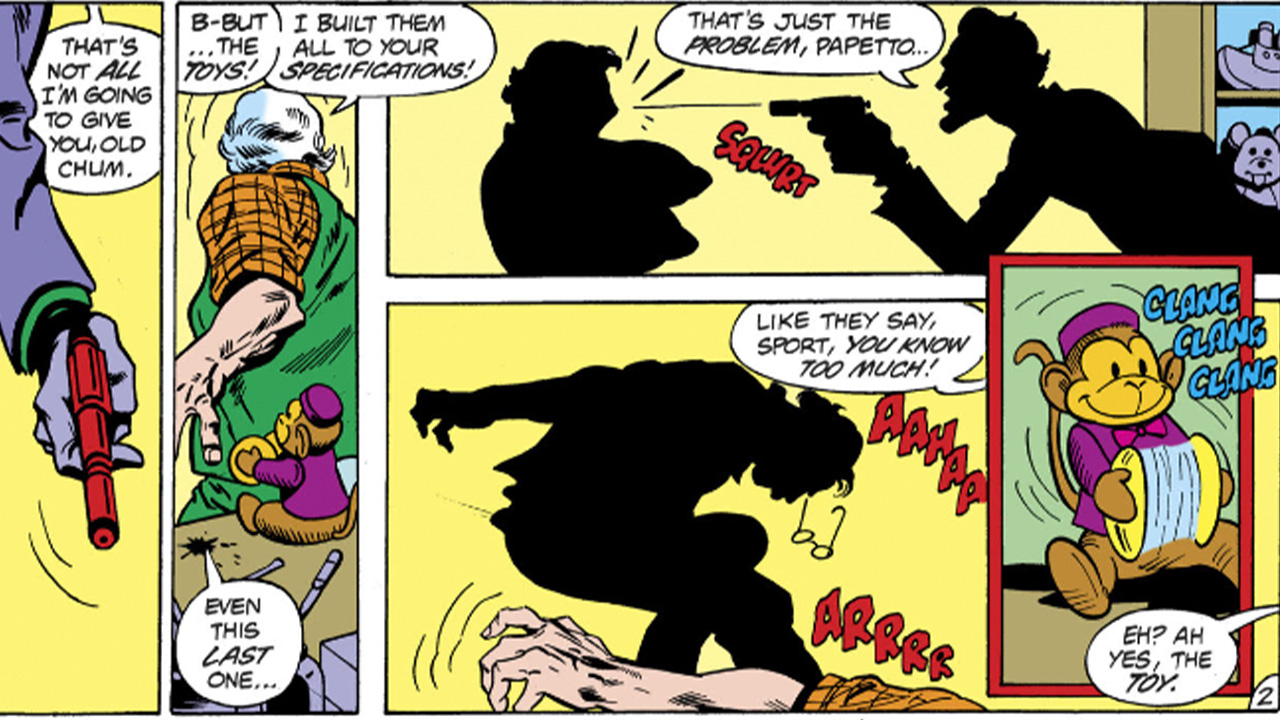 70) Rigged a blimp to explode, causing glass shards to fall onto the citizens below as if it was raining knives (Batman Confidential #11).

72) Contaminated the District Attorney’s record collection, causing poisonous gas to be released when the album was put on the record player (1940’s Detective Comics #45).

74) Used chemicals hidden in two of his false teeth to create a bomb. The explosion killed a nearby guard (1940’s Batman #1).

75) Snuck an exploding whoopie cushion under a guard’s chair (Joker #5). 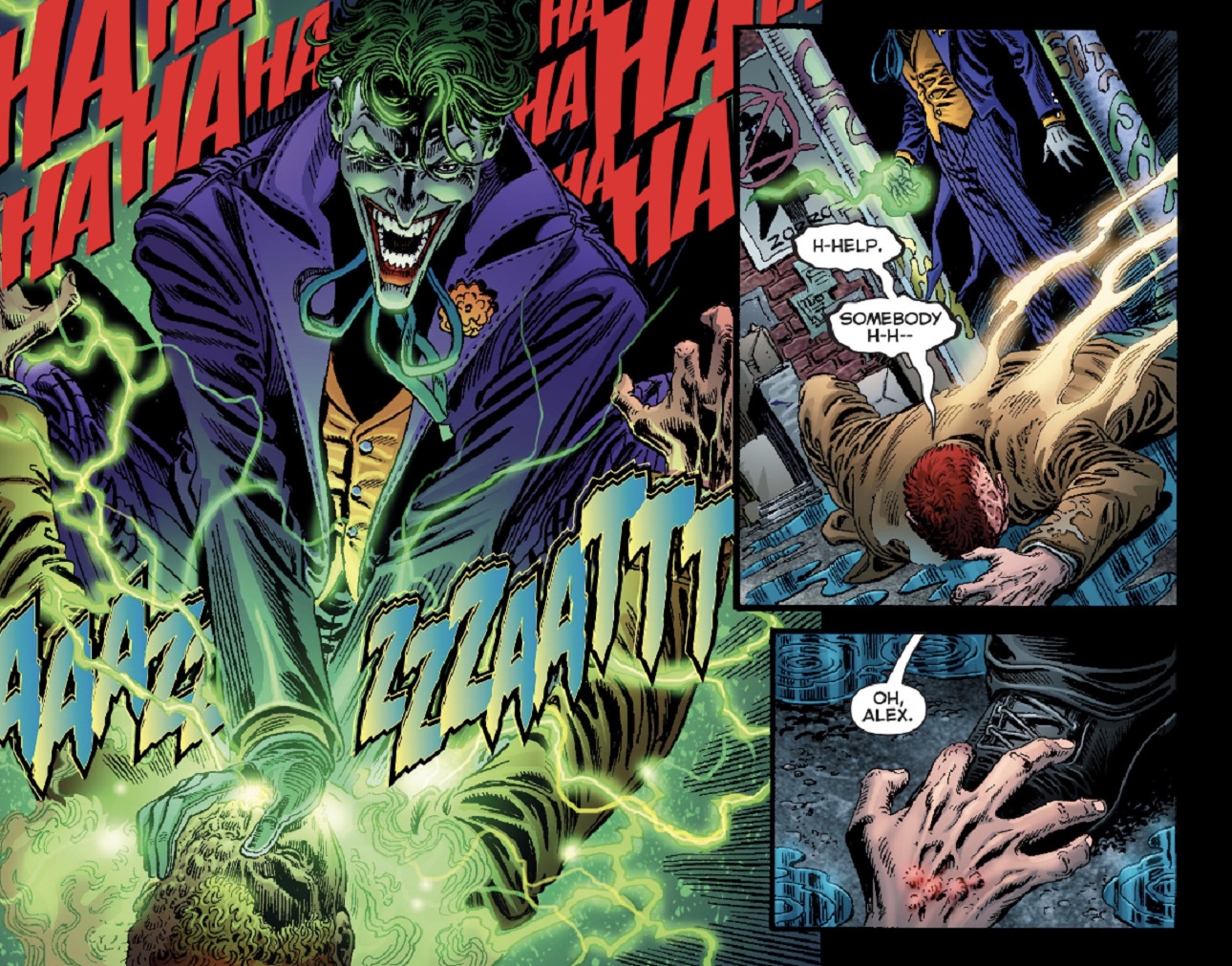 76) Melted Alexander Luthor’s face, then fried him with a buzzer and shot him in the head (Infinite Crisis #7).

78) Brutalized Jason Todd with a crowbar, and left him in a warehouse next to a bomb (Batman #427). 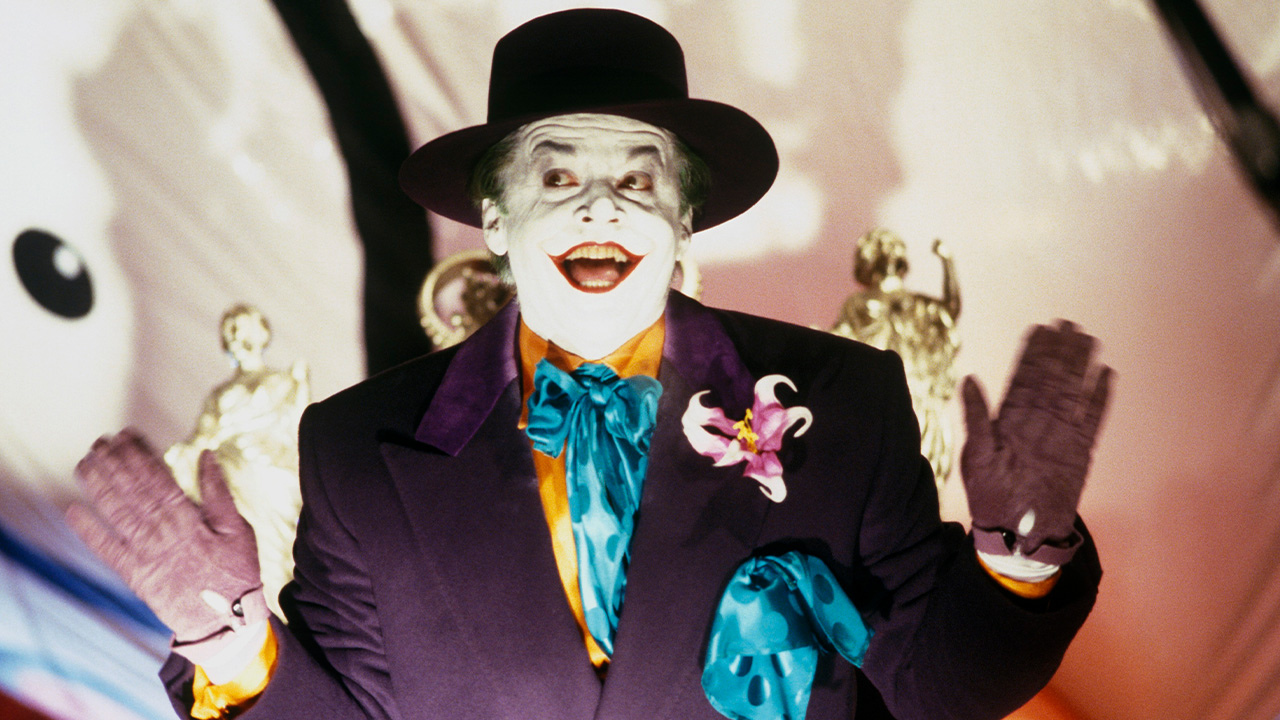 How would you want the Joker to murder you? Let us know in our Community!