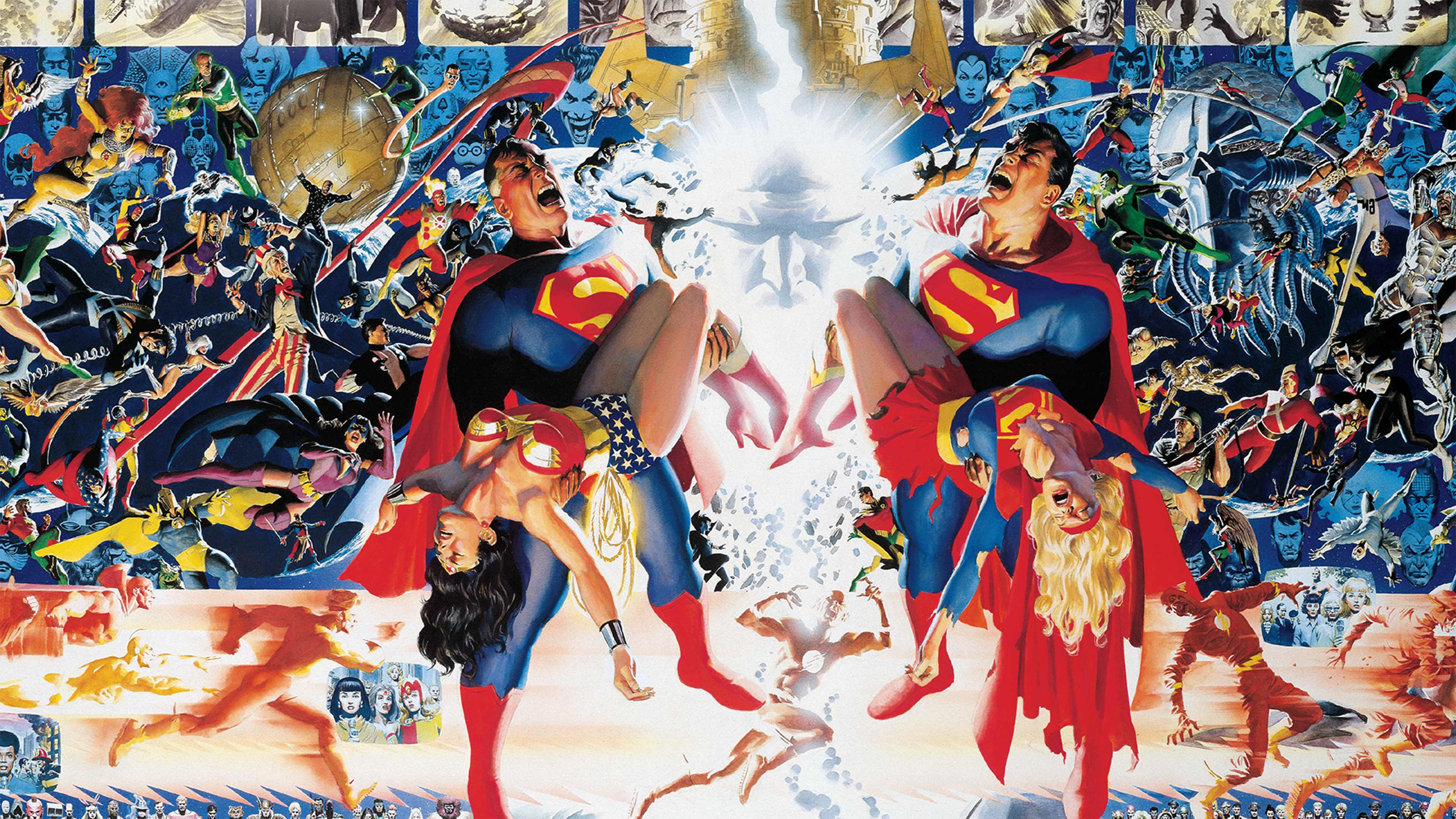 7 Things You Should Know Before Reading CRISIS ON INFINITE EARTHS

The most ambitious crossover event in television history begins next month, as Arrow, The Flash, Supergirl, Batwoman, Legends of Tomorrow, and many more characters and worlds converge for “Crisis on Infinite Earths.” If you’d like to read the original comic book series from 1985 which inspired it all, it's available right here on DC Universe… but be warned: like the many seasons of television which preceded the upcoming version of the event, the original comes with a lot of history. But never fear! Like past superhero team-ups on both TV and in comics, fans can get through it together. Let’s sort through some of it to prepare for a journey through the multiverse like no other. And if you'd like to check out the comic book roots of your favorite CW heroes, check out our articles on Arrow, The Flash, Supergirl, Legends of Tomorrow, and Batwoman for the easiest way to learn more!

So what are these “Infinite Earths,” anyway? The concept of multiple Earths in the DC Universe was first established in 1961’s The Flash #123, “Flash of Two Worlds.” In this story, the Golden Age stories of the original Flash, Jay Garrick, are reconciled with the then-modern stories of Barry Allen by establishing them as having taken place on two separate worlds. “Earth One” was the home of Silver Age concepts such as Barry, Hal Jordan, and the Justice League of America, while the older “Earth Two” was home base for the likes of the Justice Society of America. The heroes of these two worlds would periodically meet to address threats which affected the whole multiverse from then on — including the emergence of “Earth Three,” home to a host of evil doppelgangers of the Earth One denizens.

“Imaginary stories” were also quite common before Crisis on Infinite Earths, precursors to the “Elseworlds” tales which would come later. Each of these were said to take place on a separate Earth of their own. Additionally, stables of characters acquired from smaller comic publishers as DC grew were set on their own Earths, too. Charlton heroes like The Question, Blue Beetle, and Captain Atom were of Earth-Four. Fawcett Comics characters, like Captain Marvel, were from Earth-S. The Nazi-battling Quality Comics stable such as Plastic Man and Uncle Sam and the Freedom Fighters hailed from Earth-X. And there was also Earth-Prime, the world without Super Heroes where you happen to be reading this article right now. In Crisis on Infinite Earths, ALL these worlds, and many more, participate in a colossal threat to all of existence.

2. THE TRIALS OF THE MONITOR 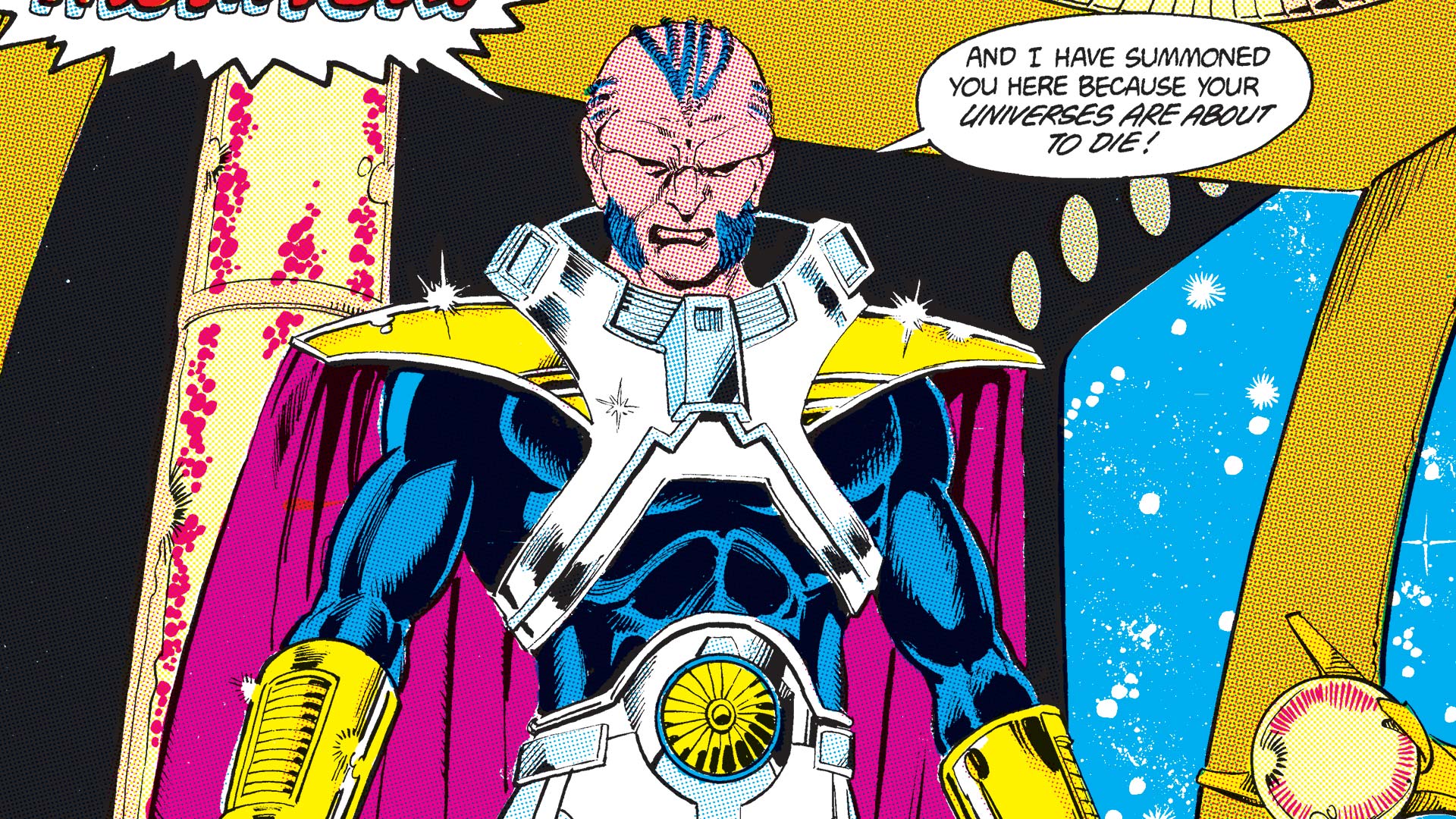 Perhaps you’ve heard of the “Anti-Monitor,” the big, bad, reality consuming Final Boss of Crisis on Infinite Earths. But long before he showed up, the DC Universe was haunted by the presence of the mysterious Monitor, appearing throughout DC’s comic line as early as 1982. Assisted by the equally enigmatic Harbinger, The Monitor set about opposing the world’s heroes in unexpected ways, as each appearance raised only more questions to his true nature. Eventually, we see that The Monitor had never been the Earth’s foe; rather, he was doing his part to prepare the world for a crisis the likes of which they had never seen before: his own Anti-Matter counterpart, the Anti-Monitor. 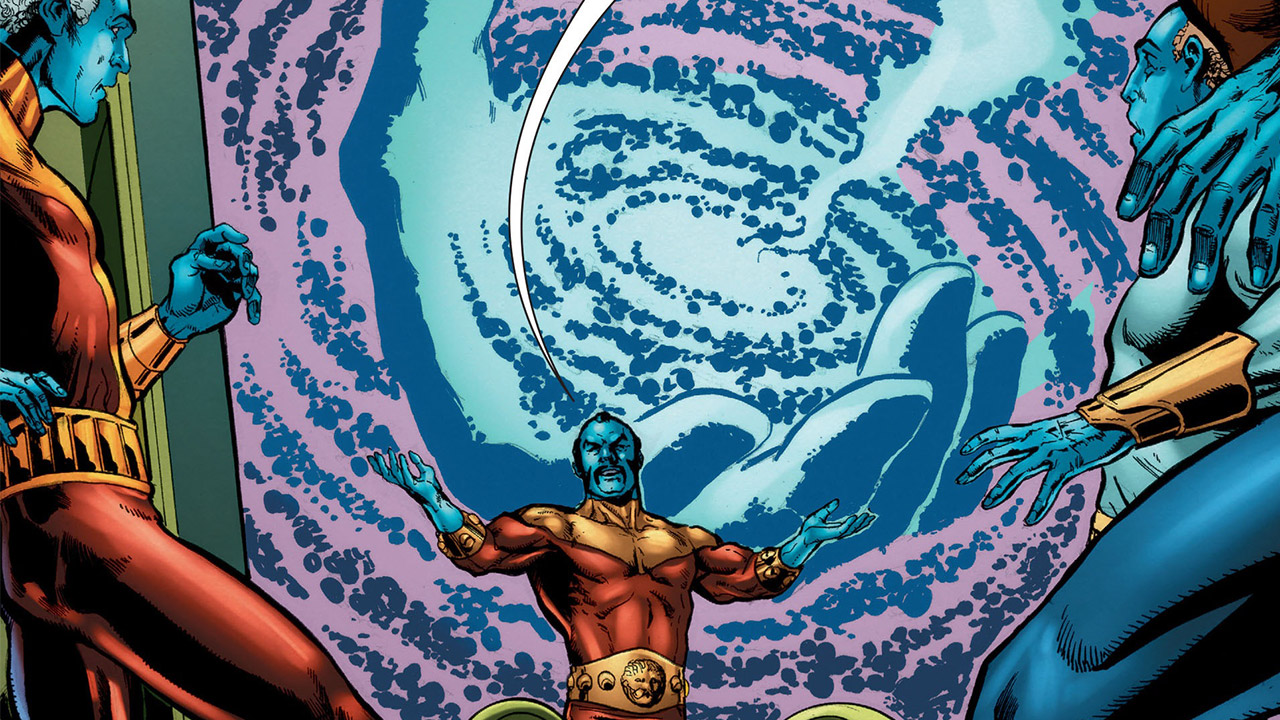 But the real perpetrator of Crisis on Infinite Earths isn’t the Anti-Monitor at all. The events of Crisis on Infinite Earths can be traced back to a somewhat obscure villain by today’s standards named Krona, who first appeared in 1965’s Green Lantern #40. Krona was once a member of the Guardians of the Universe, who oversee the Green Lantern Corps from their planet Oa at the center of the cosmos. But Krona was expelled for his dangerous experiments to observe the birth of the universe itself. These experiments led to the creation of the Anti-Matter Universe, a mirror reality where all evil was born... and nowhere was this evil more concentrated than in the birth of the Anti-Monitor. Thanks a lot, dingus. 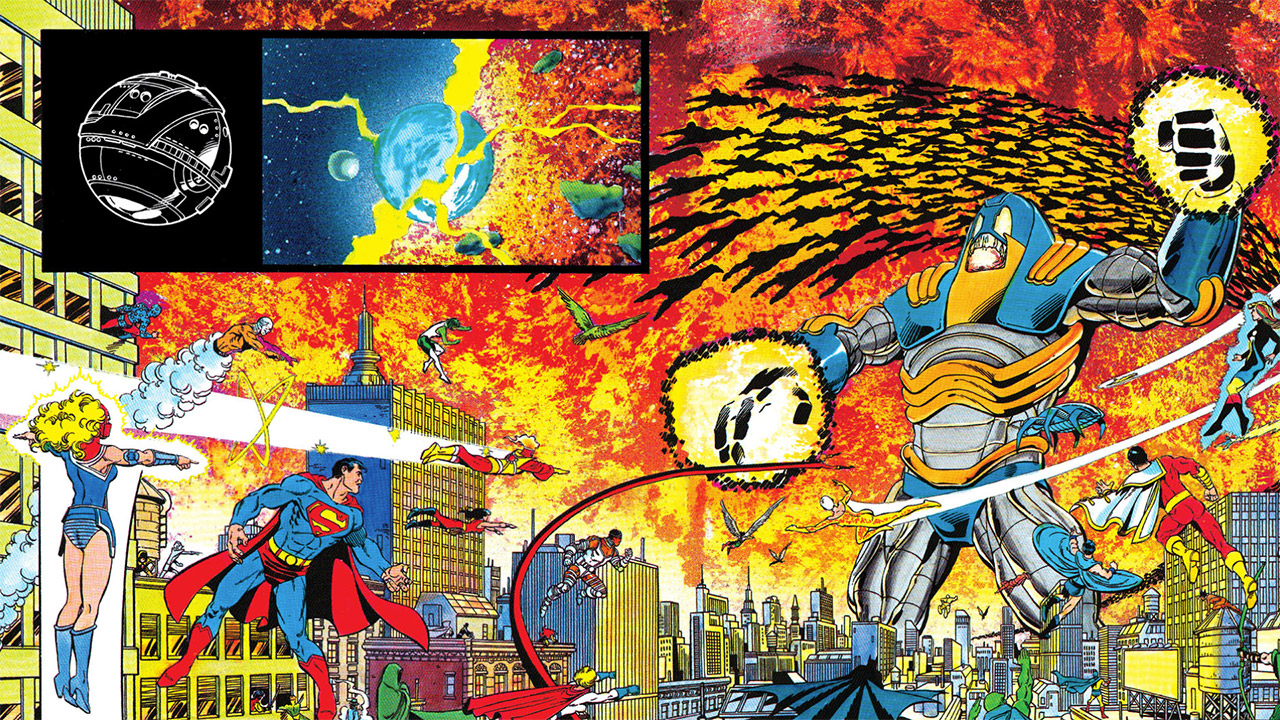 But no, seriously, the REAL perpetrator of Crisis on Infinite Earths is DC writer and editor Marv Wolfman. Wolfman’s success in launching The New Teen Titans in 1980 wrote him a ticket which allowed him to do pretty much whatever he wanted, with the promise that the rest of the DCU would see the same prosperity which he brought to Titans. Wolfman had plans upon plans for whipping DC into fighting shape: chief among them being a streamlining of the gargantuan, winding backlog of comic book history amassed over 50 years of operation. All these various Earths and side stories, alternate timelines and futures, he argued, were too hard to follow for new readers. (And perhaps he was right… there’s a reason this primer is even necessary.)

Crisis on Infinite Earths was designed to condense that vast multiverse into a single reality that anyone could jump into. No more wondering where or when a story took place: the idea was that they’d all be part of the same world. The story of this new world, the fruit of all these labors, is told in the subsequent volume to Crisis on Infinite Earths: The History of the DC Universe. This handbook neatly and elegantly established the order of events of the “New Earth” which arose from the catastrophe of the Crisis, taking inspiration from decades of comic history with flourishes of synthesized inspiration which brought it all in line with each other. This is really what the whole thing was for… and its deft organization and handiness as a jumping-on tool for new readers has set a standard that DC editors strive to meet to this very day. 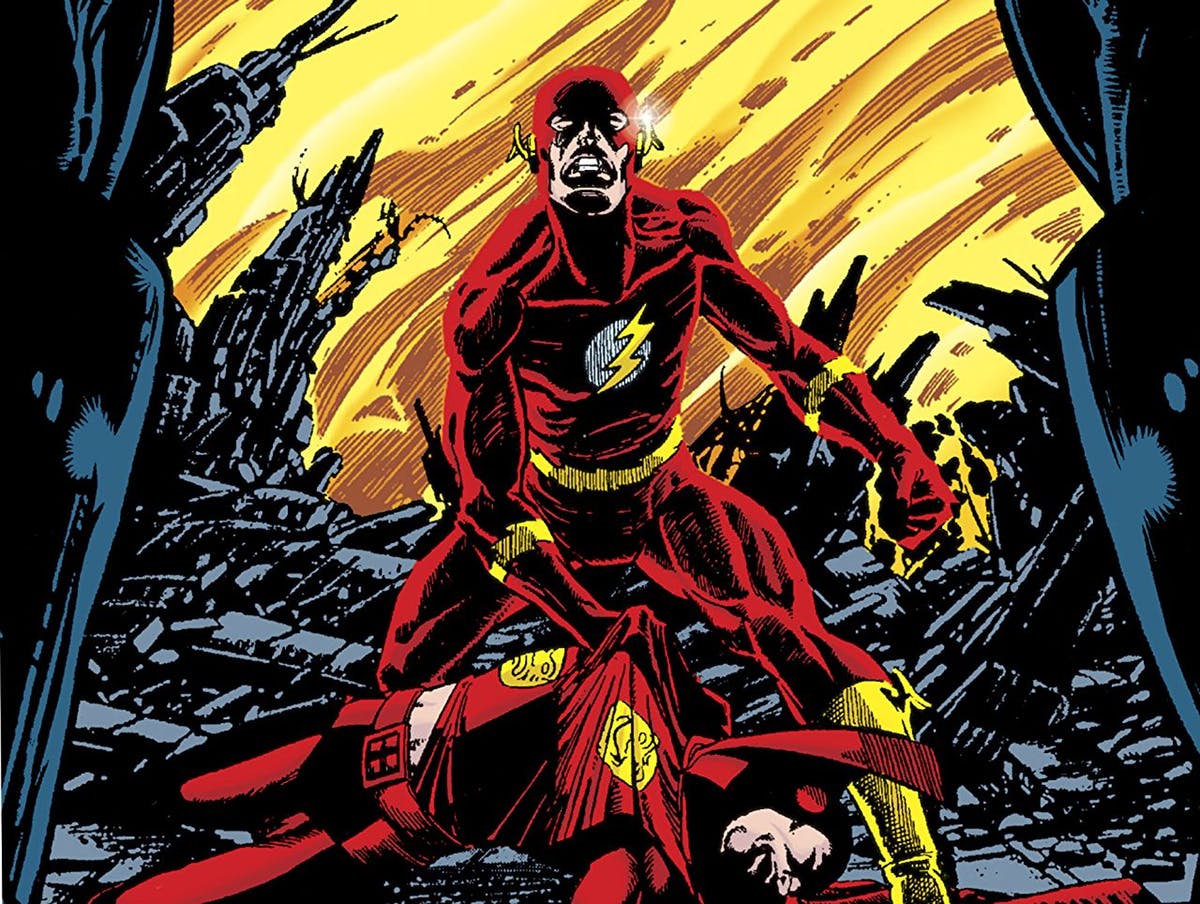 Crisis on Infinite Earths set the bar for every event to come in a lot of ways… and the requisite body count is no exception. In addition to the infinite number of deaths when you account for the end of the entire multiverse, some of the world’s most beloved heroes meet their end in a sacrifice to save the final corner of reality from the insatiable hunger of the Anti-Monitor. And while Crisis on Infinite Earths may be the grounds for a reboot in many respects, these deaths would continue to affect the characters around them — in many cases, for decades to come. You may even see the deaths of characters you never knew before, only to feel the impact of their loss as you explore the Pre-Crisis catalogue. But that’s the law of the universe, on Earth-Prime as it is on Earth-One: the old must die to make way for the new. As the refrain of the series goes: “Worlds will live, worlds will die." 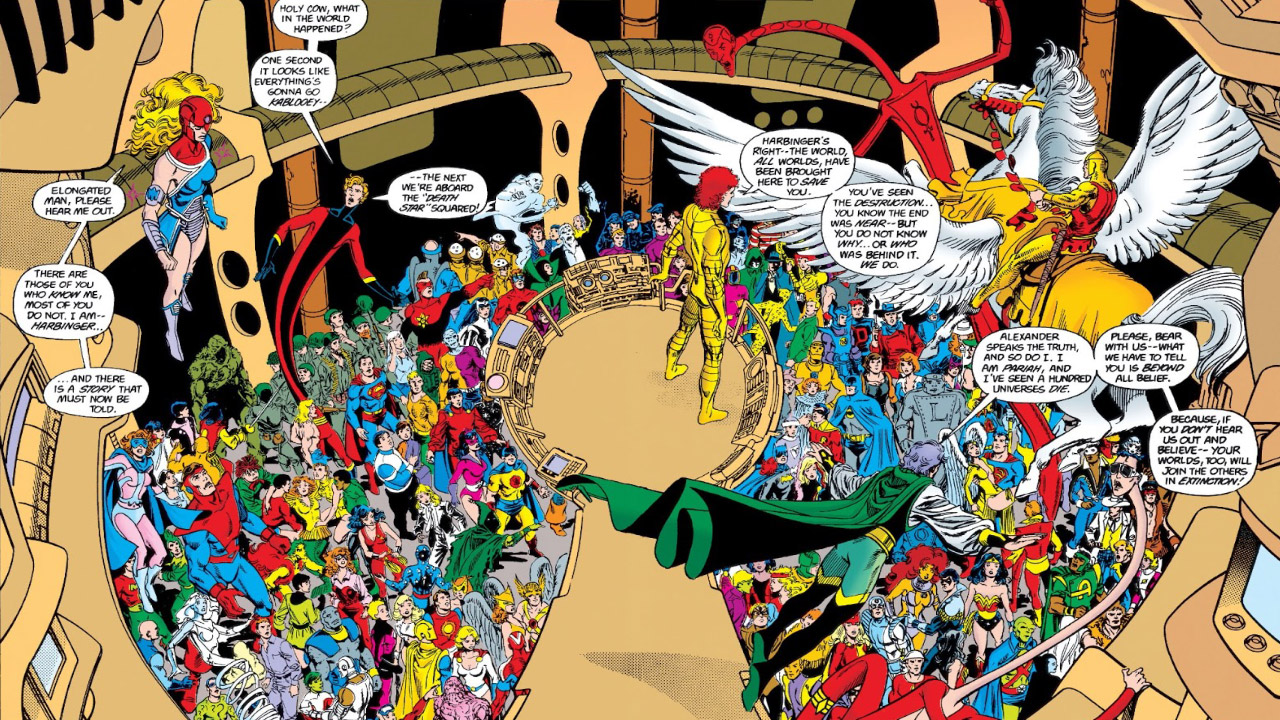 The entire saga of Crisis on Infinite Earths is told in 12 numbered issues as its own limited series. And if you just read that, you’ll bear witness to the core of the story of all corners of reality battling against the Anti-Monitor. But Crisis on Infinite Earths also bore ramifications which spilled out into practically every comic that DC was publishing at the time, with an unprecedented number of tie-ins. Much of the bloody affair has been assembled for you in our Collections section, but the true scope of its preludes, side stories, and aftermath is even wider than that. These stories were written for the diehard comic fans of the 1980s to see just how these cosmic affairs were affecting their favorite titles and characters. After all, the central premise of Crisis on Infinite Earths was that it was one last, chaotic hurrah for absolutely EVERYTHING that came before. No character, no matter how obscure, would be left out. Every single one would show up somewhere. Everyone mattered, and everyone would take part. Which brings us to our final, most important point…

7. YOU’LL NEVER TRULY UNDERSTAND EVERY LAST PART OF IT 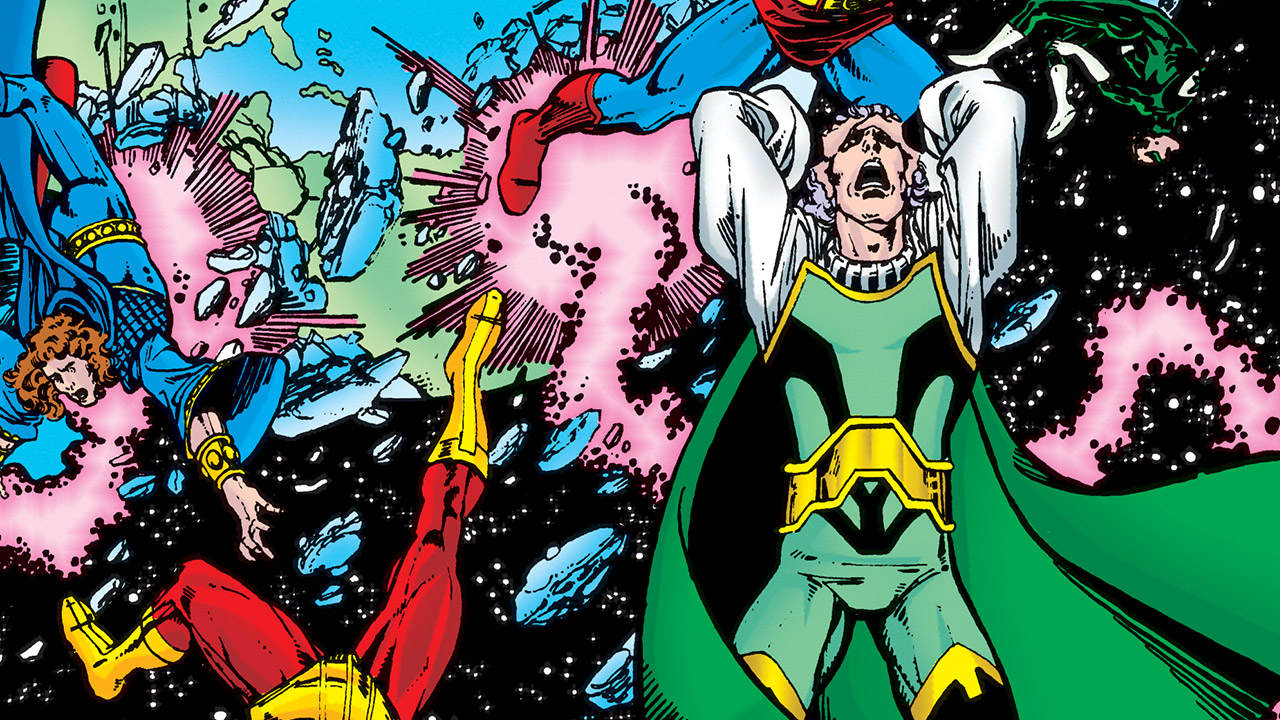 The only thing you REALLY have to do before Crisis on Infinite Earths… is humble yourself. Years and years of meticulous planning went into this event, and everything it encompasses. Putting it all together was literally the full time job of the comic book industry’s brightest luminaries. There is no guide complete enough, no primer comprehensive enough, to prepare you for the significance of everything that happens and everyone who takes part. Accept that you are but a mortal, imperfect being, take a brave leap, and dive in. There will be surprising moments that you’ll personally appreciate, as if they were written only for you. And many others which will sail completely over your head.

Whether it was intended this way or not, Crisis on Infinite Earths is a book which benefits from multiple readings. Every few years, we recommend you come back to it with new eyes. As you grow in knowledge as a sage of the DC Universe, you’ll gradually come to understand more of it at your own pace, with more of its secrets are revealed to you. Crisis on Infinite Earths is a gift that continues to give even for those of us who have been following DC for decades. It makes even old comic book fans feel new again, bright with wonder at the unfamiliar phantasms presented before them. Do not fear the mystery; it is to be relished. Divining these secrets is the true joy at the heart of the comic book scholar. Confused? Then welcome. You’re one of us.

Are you reading Crisis on Infinite Earths as you await its TV adaptation? Let us know in our Community!