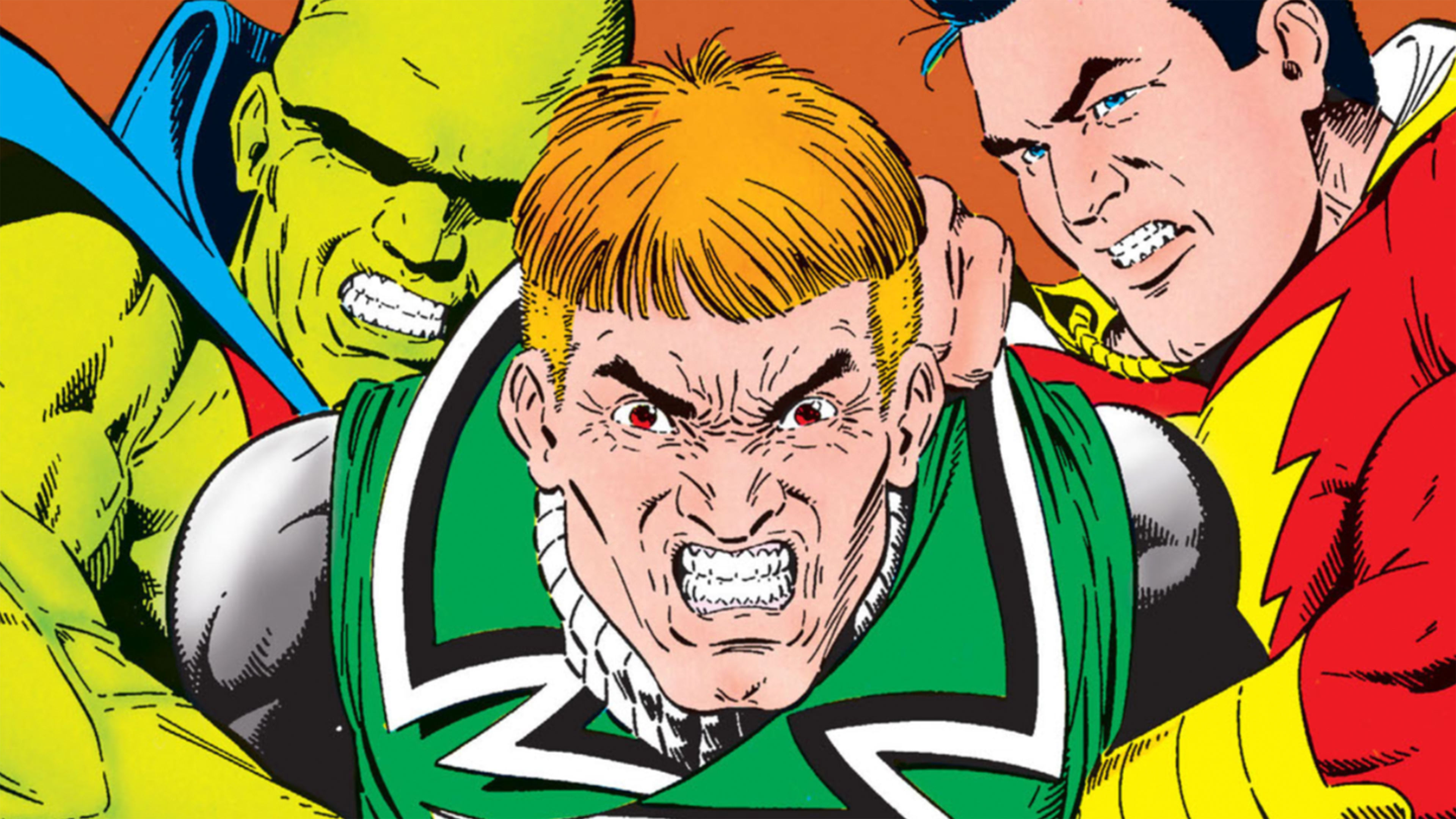 7 Reasons Why Guy Gardner's Not So Bad, We Promise, Just Give Him a Chance

Look. We get it. Whether it’s in the Justice League or around the Green Lantern Corps, the Green Lantern Guy Gardner has something of… a reputation. He’s been called an egomaniac. A hothead. A womanizer. And a lot of names we can’t print here. Many consider Guy the least likeable member of the Green Lantern Corps -- and there are a LOT of people in the Corps. But we promise that once you get to know him, you’ll learn to like him. He’s really not so terrible, we swear. Just hear us out, and maybe you’ll start to come around too.

A FRIEND TO ALL CHILDREN 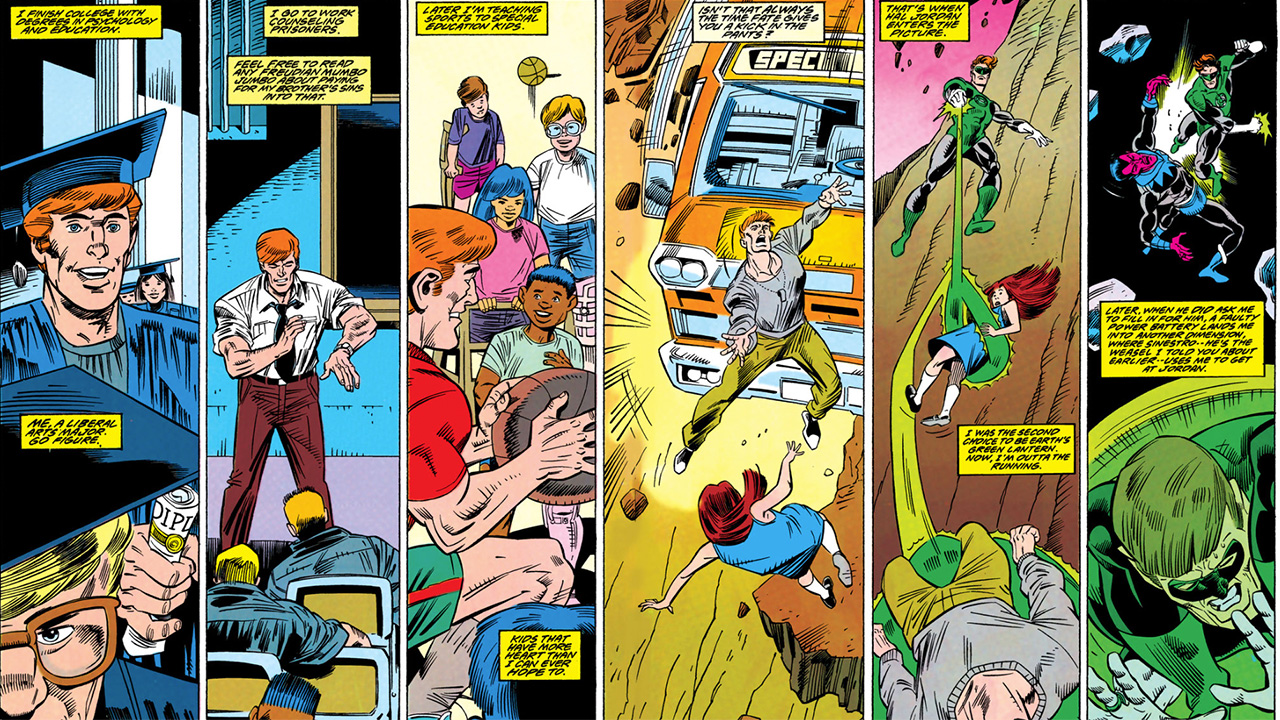 For a Green Lantern, Guy Gardner can work pretty blue around his peers. But he’s always been supportive of children, with a well established background as both a social worker and a special needs educator. Sadly, at the start of the New 52, Guy discovered that his career as a Green Lantern put the children he held so dearly at risk from the Corps’ enemies, and was forced to choose saving the universe over encouraging the minds of tomorrow. But the kids he mentored during his time on Earth were surely improved for his presence in their lives.

Say you’re part of an elite task force of Earth’s greatest heroes, on a multi-year mission to rescue abducted young metahumans from the forces of Darkseid. How does one possibly pass the time in traverse through the inky void of space? How can one meet the impossible task of morale upkeep? Green Lantern Guy Gardner, at your service: with a song in his heart and a spring in his ring. Ohhhh, the nebulous clouds ‘round Oa, such glorious, beautiful gas…!

WHERE EVERY HERO KNOWS YOUR NAME 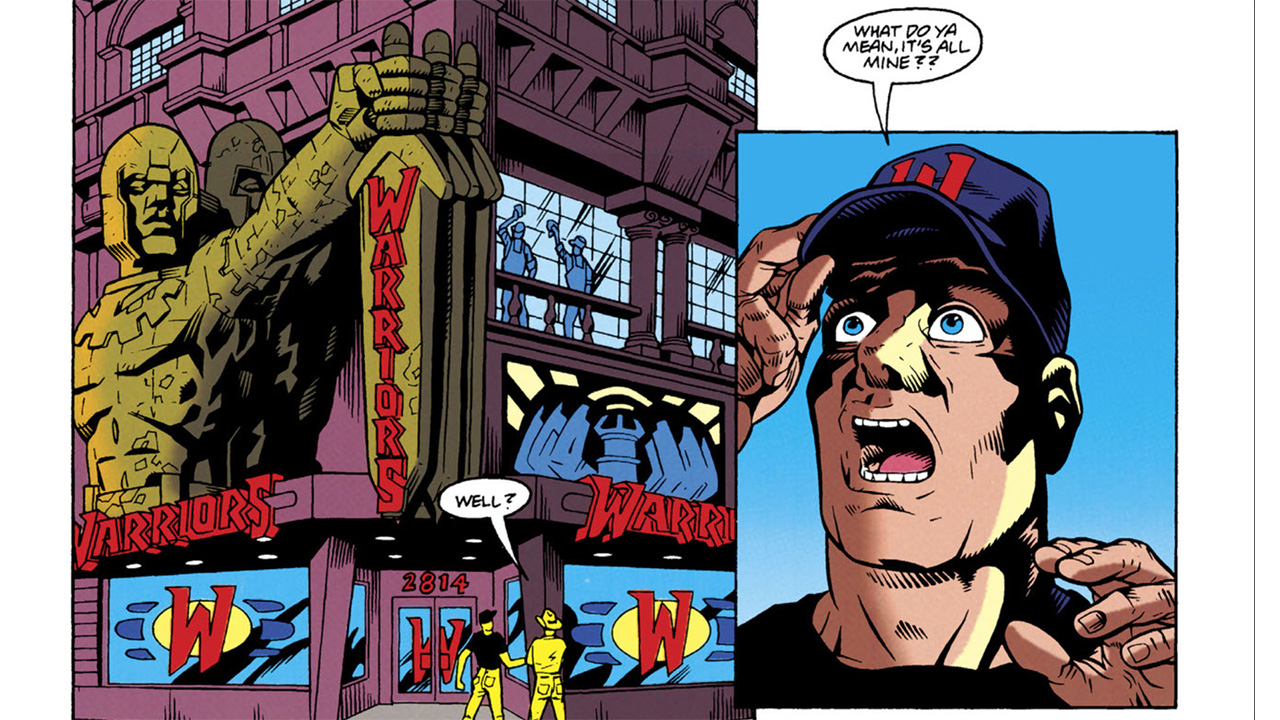 Guy Gardner isn’t just one of the greatest Green Lanterns- just ask the Guardians- he’s also a galaxy-class host and successful small business owner. Guy is the proprietor of “Warriors,” a Green Lantern themed bar which caters to metahuman clientele, where protectors of the planet and the universe can kick up their feet and relax after a hard day of battling cosmic level threats. With locations on Earth and Oa, Guy always makes time to pour you a glass and lend an ear to your troubles about how your Antimatter Universe doppelganger is hunting every version of you in the Multiverse. Or whatever your Super-Problems happen to be. At Warriors, you’re among the people who understand.

We’re sorry. Last we checked, what was the number one requirement for flying with the Green Lantern Corps? Was it teamwork, thoughtfulness, or inspiring leadership? Oh, no, that’s right: it was WILL. Even Guy’s biggest haters will admit that his definitive qualities include a boorish, hardheaded refusal to ever give up a single inch of ground on any issue, no matter how unreasonable. Sounds pretty darn willful to us! In fact, as Booster Gold once learned, Guy’s level of willpower may have been stronger than Hal Jordan’s himself, the so-called “greatest of all Green Lanterns.” It just so happened that Hal was closer to Abin Sur’s ship when it crashed on Earth. Sometimes, them’s just the breaks. 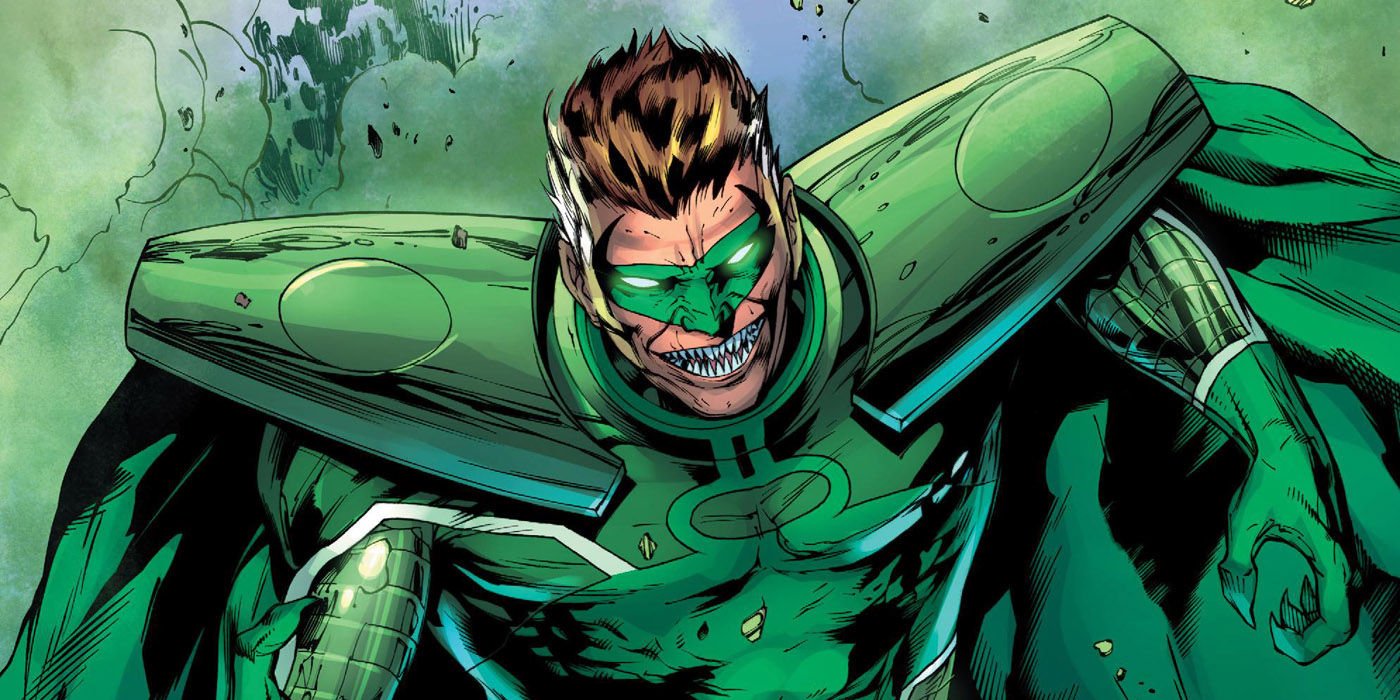 So you’re not a Guy fan. Not to take anybody else down, but who’s your fave Lantern then? We guarantee they are just as wack. You’re just overlooking their imperfections. Hal Jordan? Massacred the whole Corps when he got a little gray in his hair. John Stewart? Oh, if you think Guy is cocky, he let a whole planet blow up because he didn’t feel like bringing back-up. Kyle Rayner? Ditched the green the minute he found out there were other colors so he could catch them all. Simon Baz? He carries A GUN everywhere, and he WILL fight you if you ask him about it. Jessica Cruz? Jessica Cruz is a perfect completely flawless angel, but we’re not talking about her right now. The point is, a character is allowed to have faults and still be worth investigating! In fact, it’s those imperfections which often make them interesting to explore.

A MAN OF PEACE

Guy Gardner has a reputation for resolving conflict head-on, with fists meeting faces. And, to be fair, that was a big part of how Guy faced the challenge of a union with the Sinestro Corps. But through the bonds of battle Guy established with the decorated Sinestro Corps veteran Arkillo, Guy helped forge a lasting alliance with a universal force which had before then always stood diametrically opposed to the values of the Green Lantern Corps. With the Sinestro Corps now under the leadership of Soranik Natu, Guy’s inroads into a cautious but mutually respectful relationship with the wielders of fear has proven useful on many a campaign against greater evils. 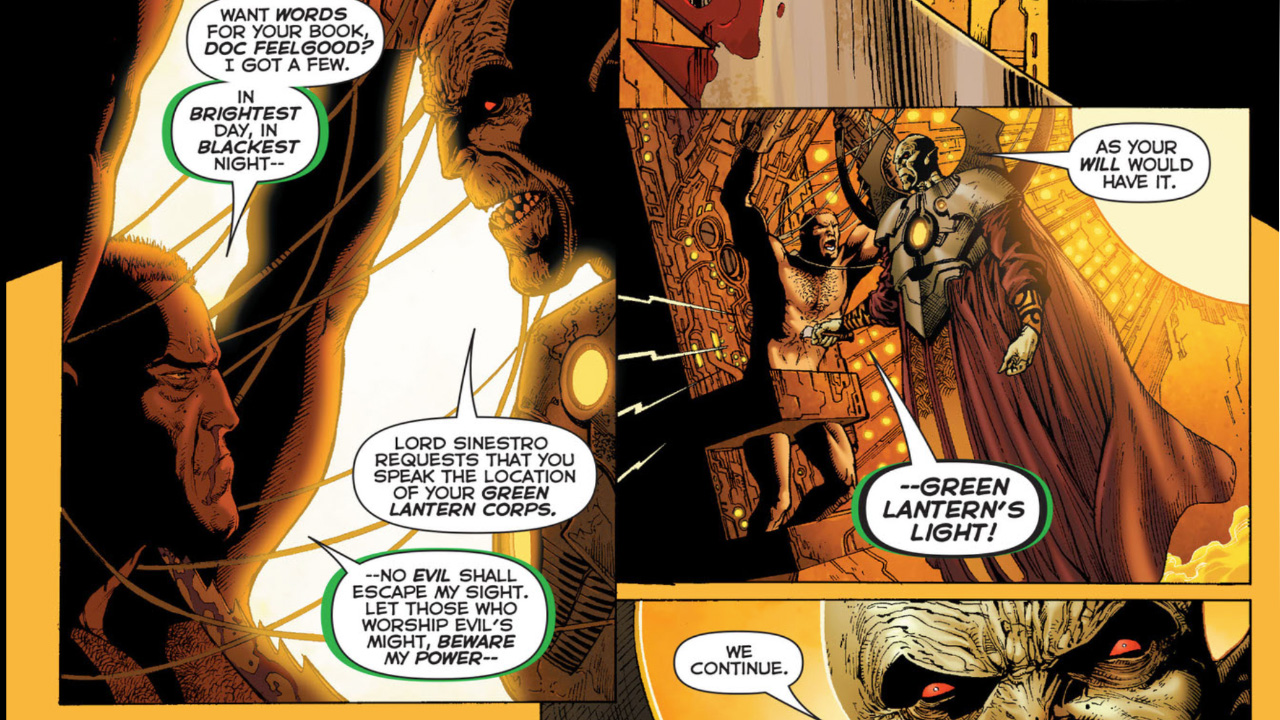 Nobody in the universe loves being a Green Lantern more than Guy Gardner. This is a man who lives for his job, and loves what he does. So great was Guy’s passion for his beloved Corps that he proved the only member capable of enhancing his power by wielding the weapons of the Star Sapphire Corps, famously powered by love — not for a person, but for the Green Lantern Corps itself. With his unapologetic, unpretentious presence in the ranks, Guy often represents the concerns and feelings of his fellow Lanterns which the “Elite” ranks of Hal, John, Kyle, and the Guardians themselves often fail to account for. And when everything is on the line, when the Corps can only count on a man too stupid to die, Guy Gardner is the man shouting the Green Lantern oath until his lungs are sore from screaming. 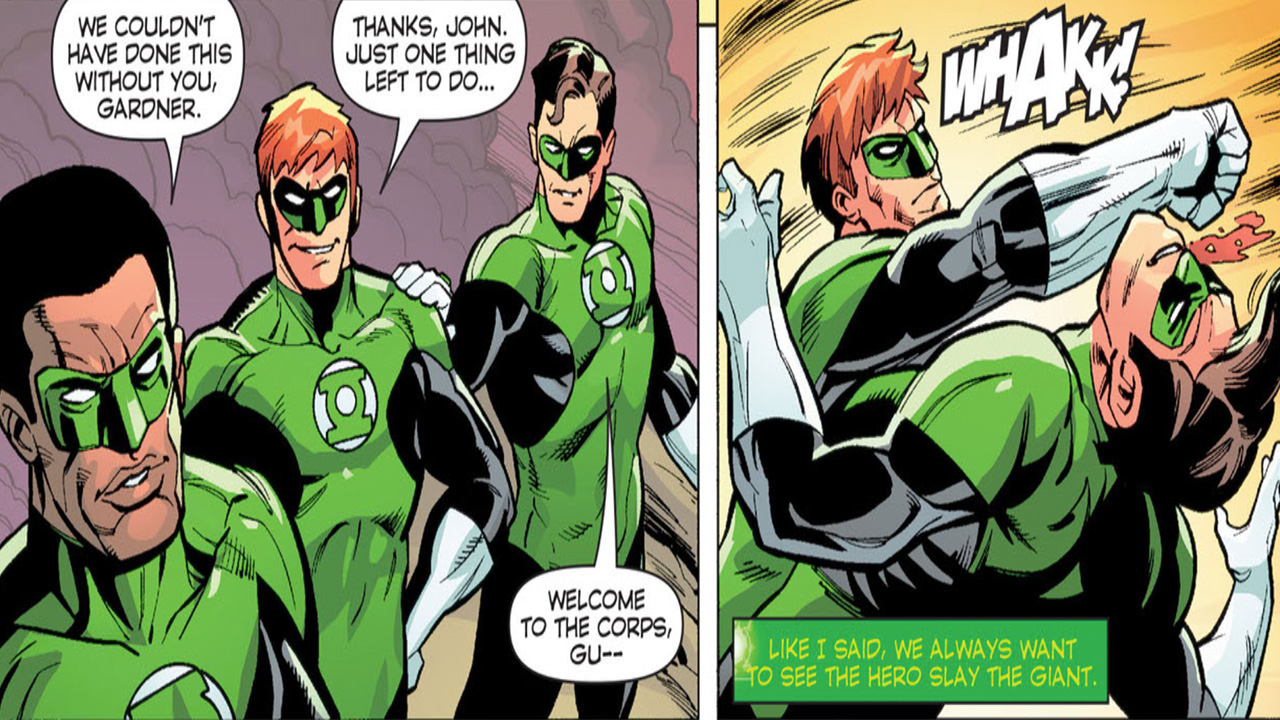 Also, he completely decked Hal Jordan once. That was pretty great.

Are you convinced that Guy's a secret sweetheart? Talk about it in our Community!