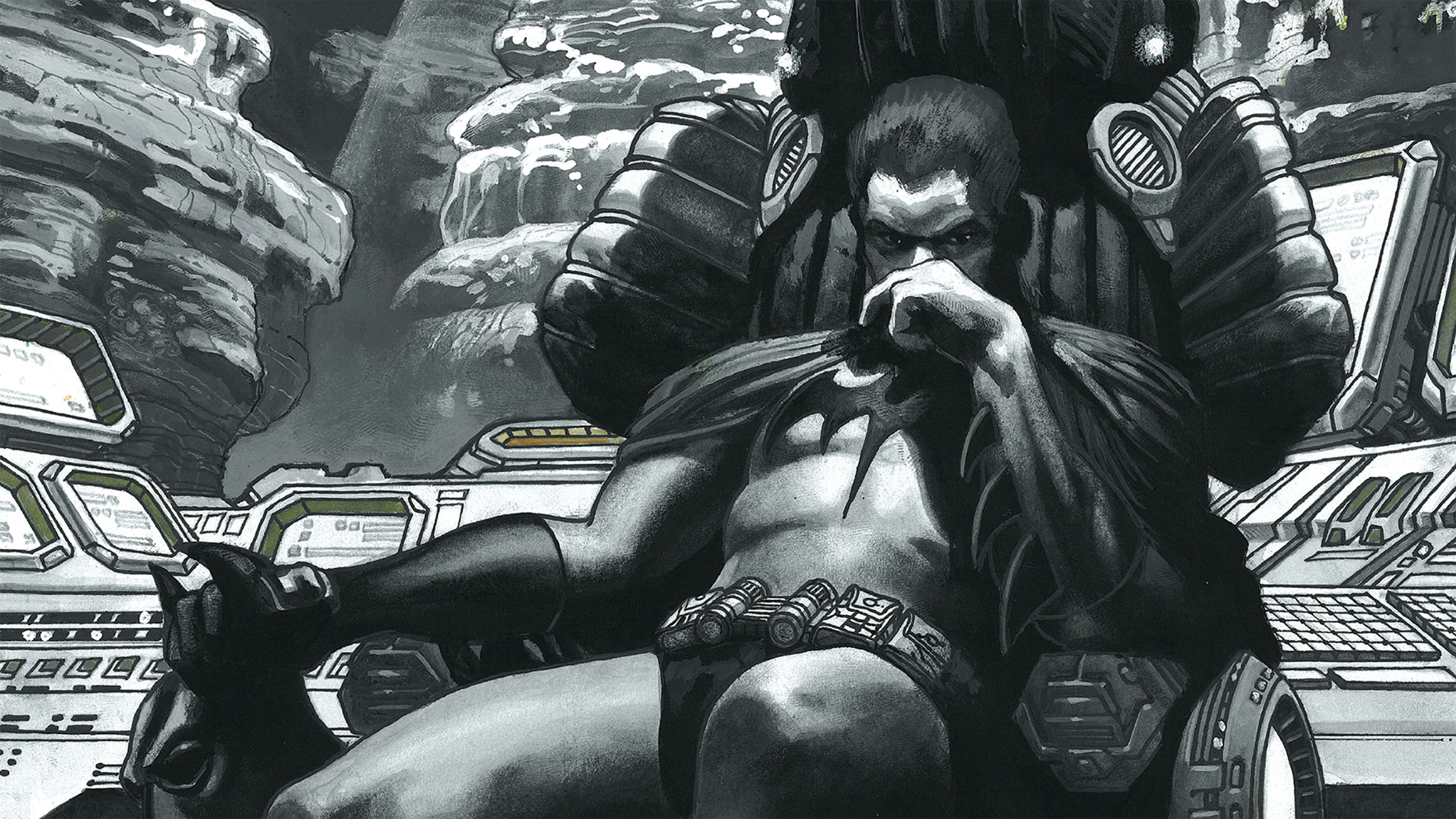 Do you have what it takes to compete with the World’s Greatest Detective? In honor of Detective Comics #1000 arriving on DC Universe, we’ve decided to take a look through Batman’s case files. Bruce Wayne might be the World’s Greatest Detective, but he can’t solve every case. Over the years, a few have eluded the Dark Knight. But perhaps a second look could shed some light on these mysteries. Let’s open the case files and examine the clues. Here are 7 mysteries even Batman couldn’t solve…

The Case: Are we just going to ignore the fact that a bat somehow wound up in Bruce’s study?

Clues and Queries: Where did that bat come from? Does Bruce’s neighborhood have a bat problem? If so, then why aren’t visitors constantly complaining about the bats? Some of you might say it came from the Batcave, but don’t be so quick to close this case. If those bats had access to the outside of the mansion they would be seen more frequently. The closest opening to the Batcave is the residential grounds of Bruce’s estate. Seeing bats out in the open in residential zones is extremely rare; and while the rodent’s appearance was fortuitous, Bruce shouldn’t be so quick to take it at face value.

Case Status: Cold case. Bruce Wayne never questions why the Wayne Manor grounds are clean. It’s a privilege thing, because he’s had Alfred for so long.

The Case: Dick Grayson’s Aunt Harriet hasn’t been seen in over 40 years!

Clues: Harriet Cooper moved into Wayne Manor during a period where Alfred was presumed dead. She disappeared after a while, and Alfred later commented that she had moved back home. Since then she’s remained persona non grata. Why didn’t she attend either of Dick’s weddings (New Titans #100 and 1997’s Nightwing Annual #1)? Why didn’t she check on her nephew after he was shot in 2018’s Batman #55? Dick Grayson seems to have forgotten she exists. Is it amnesia, or did she somehow offend the entire Bat family?

Case Status: Cold case. Living with Aunt Harriet made the whole secret identity thing difficult, and Batman is in no hurry to bring her back.

THE BOY WHO DIDN’T GROW UP

The Case: There was a 10 year period in Bruce Wayne’s childhood when he didn’t age.

Clues and Queries: In Detective Comics #235, Bruce recalls a childhood memory of seeing his father dressing up as a bat for a masquerade ball. Judging by Bruce’s height and language skills, he seems to be somewhere between the age of 6 and 8 years old. The problem is Bruce places this flashback A FULL DECADE BEFORE HIS PARENTS WERE SHOT. Most contemporary accounts of Batman’s origin agree that he was between 6-8 years old when his parents died. How did Bruce go a full decade without aging? We can’t blame this on bad memory either, since the flashback states that the criminal Lew Moxon served 10 years in prison. The 10 year time-skip between the masquerade ball and the Wayne murder is an important plot point, making Bruce’s prolonged youth all the more puzzling.

DOES THE MAILMAN KNOW? 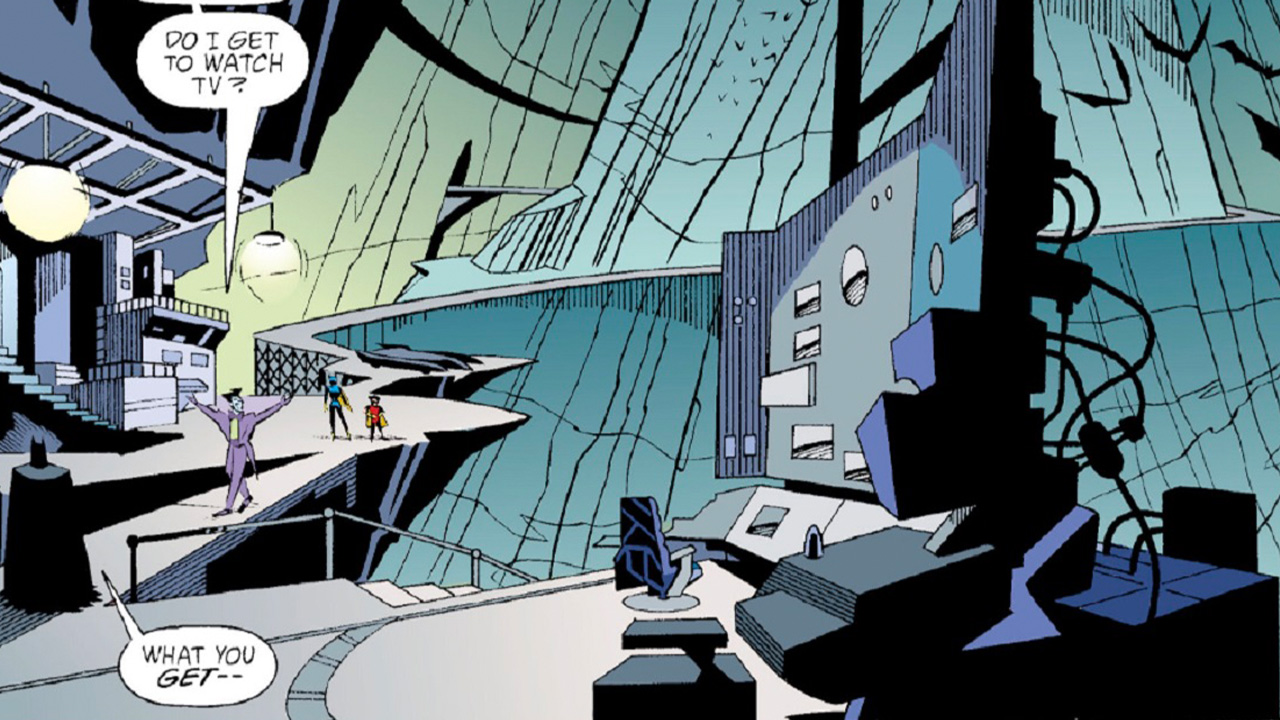 The Case: How do Bruce and Alfred get all of their expensive Batman equipment delivered to Wayne Manor without arousing suspicion?

Clues and Queries: Look at the size of the computer in the Batcave. Even if Bruce had to assemble it himself, the screen alone would have been a huge order. Who is the mailman that drops off these huge packages at Wayne Manor, and have they put two and two together? Since Batman upgrades his arsenal on a regular basis, this helpless fellow must be making frequent deliveries. Could Alfred be bribing him?

Crime Scene: Too many examples, but we’d like to point out how huge the Batcomputer is in Batman: The Animated Series.

Case Status: Cold case. Bruce is too preoccupied with the Joker to realize that he’s a hot topic of discussion over at the Amazon warehouse. 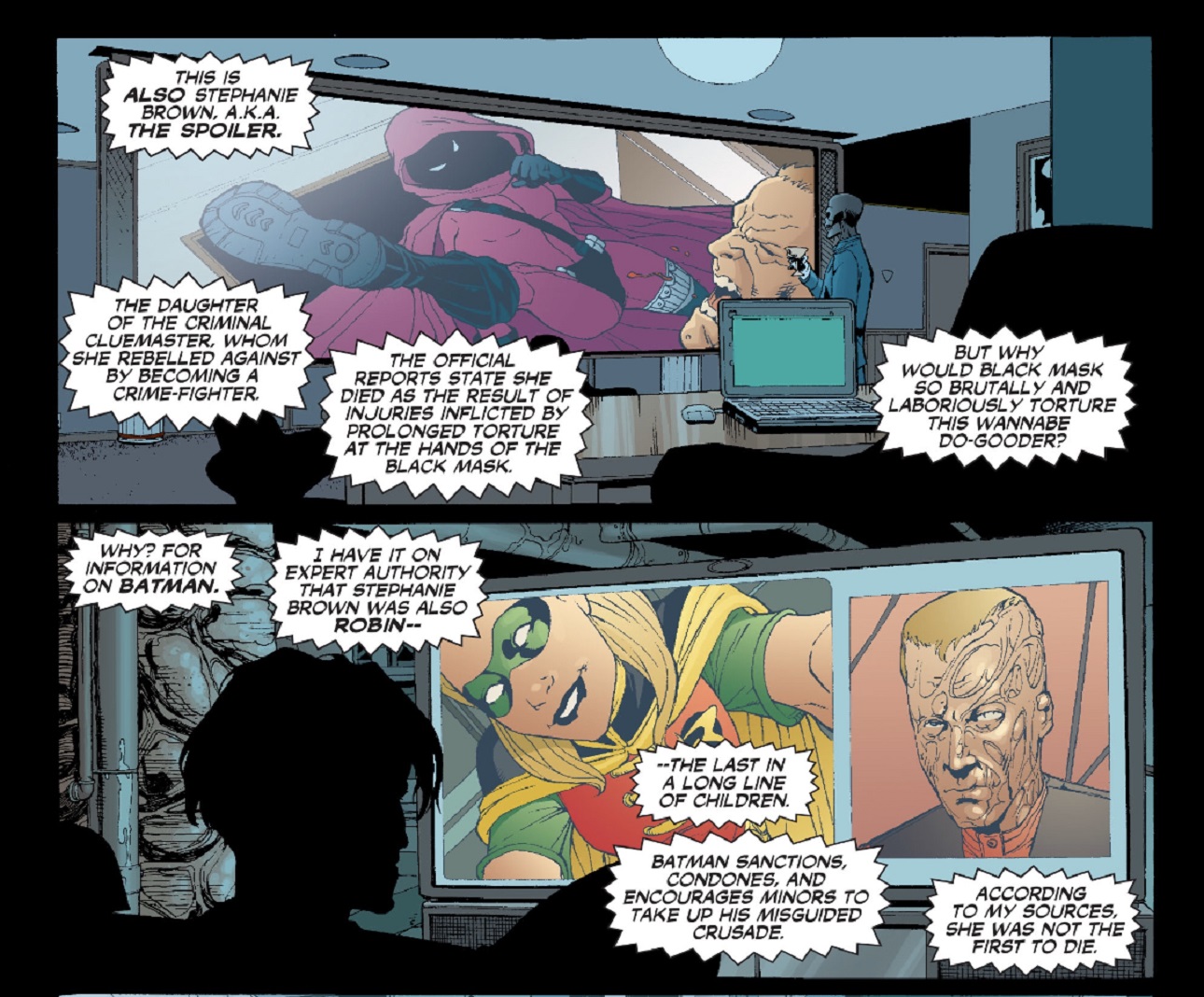 The Case: Why did the entire world forget that Stephanie Brown was publicly unmasked?

Clues and Queries: At a time when Stephanie Brown was presumed dead, her father publicly revealed her heroic identities as Spoiler and Robin to a live television audience. Stephanie’s mother later corroborated his report. The news broadcasts caused a huge stir in Gotham, inspiring spirited debates about the ethics of Batman’s operation. Despite this public unmasking, Stephanie Brown lived a normal life when she revealed she was alive. She was even able to attend college (2009’s Batgirl #1) and act like she still had a secret identity.

Case Status: Cold case. It’s probably best not to call any attention to this. Asking questions would just unmask Stephanie all over again, and the girl deserves some peace. 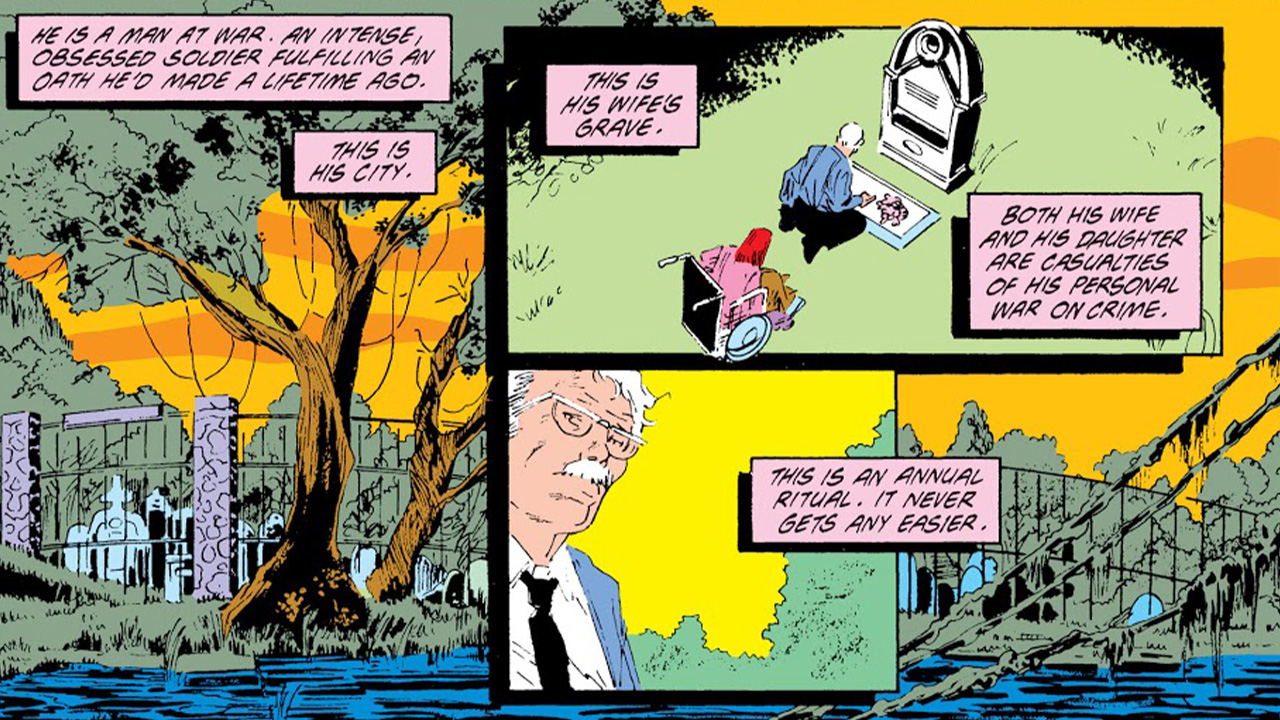 The Case: Is Jim Gordon’s first wife alive or dead?

Clues and Queries: After Crisis on Infinite Earths revamped the Dark Knight’s history, the status of Jim Gordon’s first wife Barbara Kean was inconsistent. Some stories stated that she was killed by criminals, while others said she divorced Jim and moved away. The first story in Batman Annual #13 has Batman and Jim visiting her tombstone, while a second story in the same issue states she’s alive and well! In Batman: Legends of the Dark Knight Annual #2 Gordon said he lied about his ex-wife being dead to protect her. But that doesn’t explain why everyone, including Batman, went along with it, and why Barbara had an occupied burial plot.

Crime Scene: Batman and Jim commemorated the anniversary of Barbara’s passing in Batman Annual #13. She’s showed up alive in many contemporary stories since, including Detective Comics #880.

Case Status: Cold case. Batman has no need to ask his friend Jim some uncomfortable questions, like why he bought a headstone for his still breathing ex-wife. 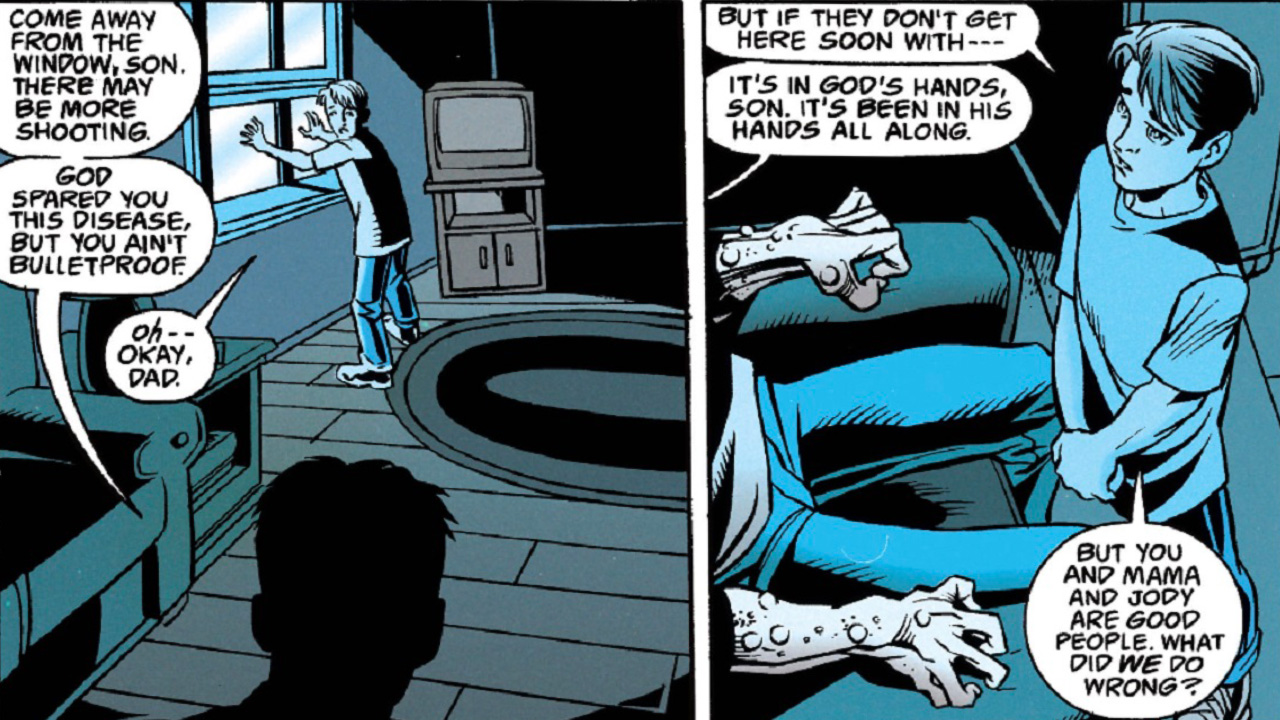 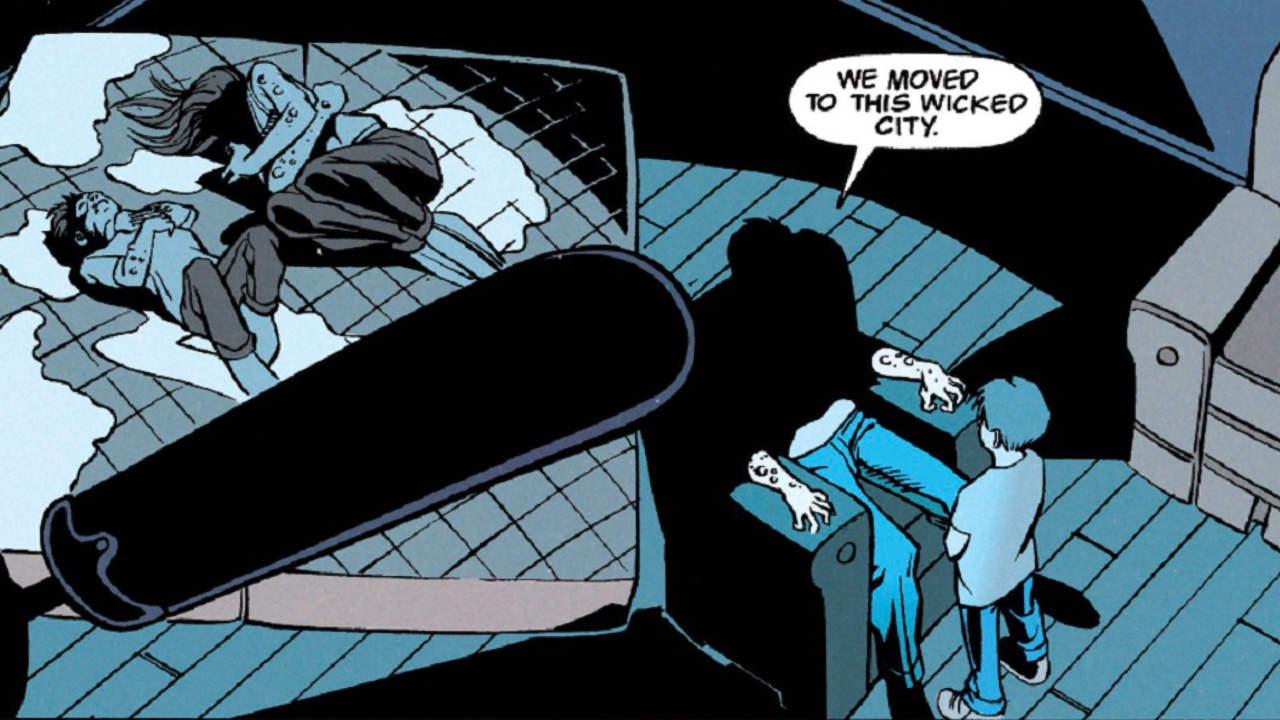 The Case: Why do people keep moving to Gotham?

Clues and Queries: Gotham has had devastating earthquakes, a plague outbreak, multiple criminal occupations, and is generally considered a nightmare city. Why are people still choosing to live here? Is the pizza great? Is real estate dirt cheap? As a certain crimeboss once put it, "Decent people shouldn't live here. They'd be happier someplace else."

Crime Scene: Every single issue of every Batman comic ever published.

Do you have any theories to help us crack these cold cases? Present your evidence in our Community!