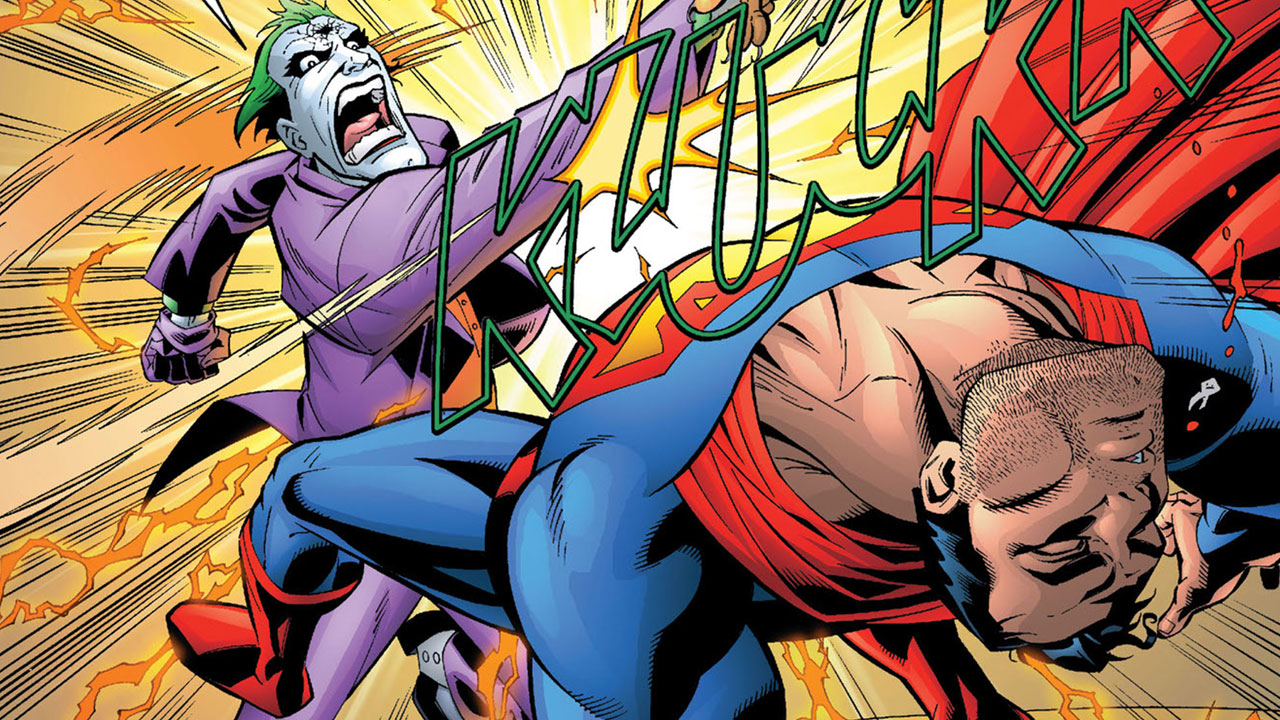 7 Heroes Besides Batman to Take On The Joker

Batman and The Joker: throughout the comic book multiverse, there is no greater rivalry than the ongoing 79 year feud between the Dark Knight and the Clown Prince of Crime. Blow for blow, Batman and The Joker’s stakes get higher with each encounter, as the Harlequin of Hate clamors to rip something from Batman away each time he falls. But like any great comedian, it’s sometimes necessary to sharpen the act by taking it on the road and seeking new audiences. As a result, The Joker has been all over this great big DC Universe of ours, antagonizing whichever costumed do-gooders he meets along the way. Here are 7 of the top encounters between The Joker and a hero outside of the immediate Bat-Family. 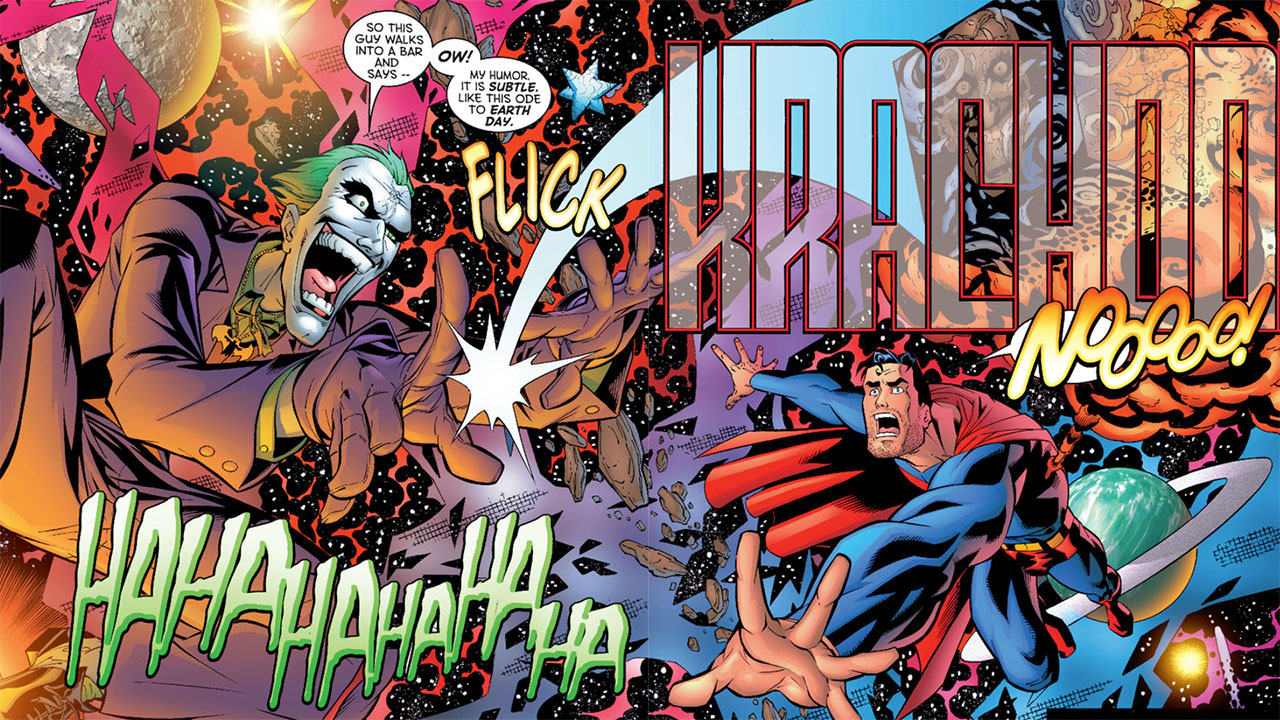 How does a clown with a gag pistol and an acid spewing flower take on the Man of Steel? By becoming a mad god. In ‘Emperor Joker,’ The Joker tricks 5th dimensional imp Mr. Mxyzptlk into transferring over his nigh omnipotent powers over the fabric of our own dimension into Joker’s possession. And just as in his regular battles against Mxyzptlk, Superman is left with no effective defense but his own wits. In a warped reality where Joker rules all, killing his hated enemy Batman daily, Superman defeats Joker by talking him through the meaninglessness of his victory: that when there is no real struggle against Batman, the very purpose for Joker’s existence is void. This keen criticism cuts Joker to the quick, ultimately leading him to relinquish his powers. Leave it to a journalist to ask the right questions. 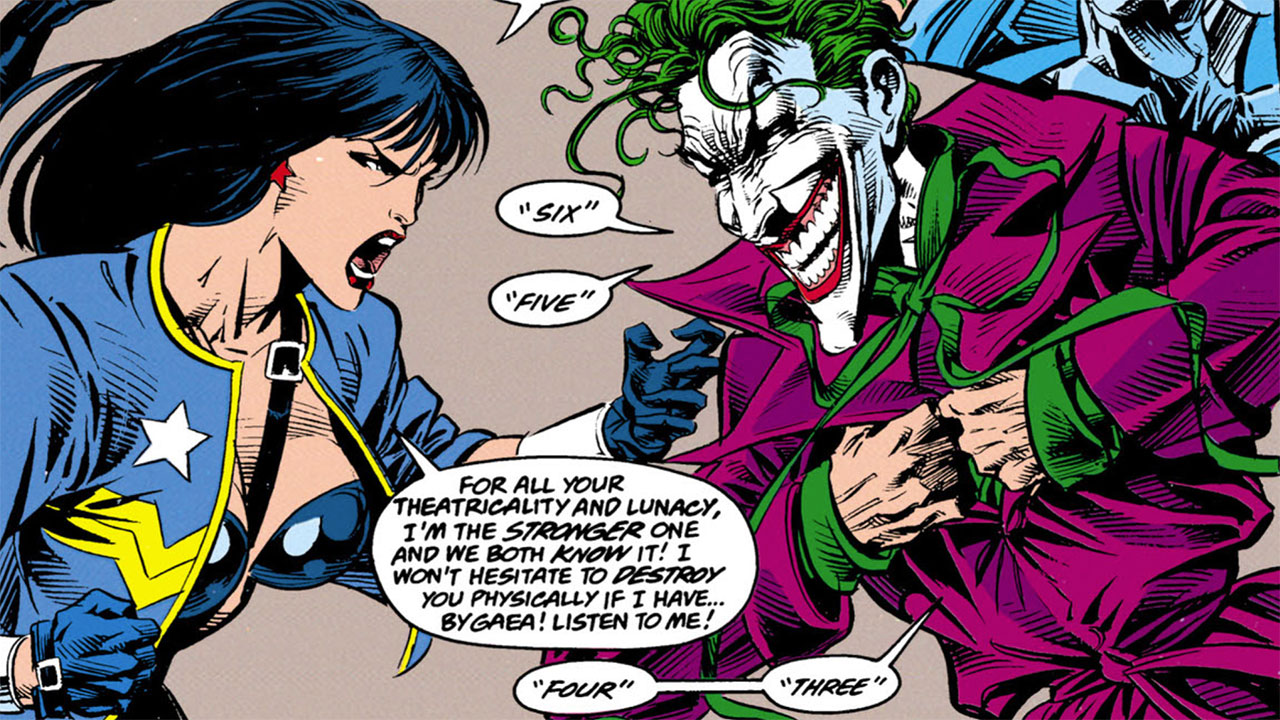 Stripped of her powers, title, and birthright in a contest against her rival Artemis of Bana-Mighdall, things seemed like they couldn’t get lower for Diana… until a drawn out proxy war between thaumaturgical rivals The White Magician and Paulie Longo put Diana up against the likes of Poison Ivy and Cheetah, fighting on The White Magician’s behalf. And that’s when The Joker dealt himself into the game as a wild card, to take Diana out of the picture. Joker douses the one-time Wonder Woman with a paralytic agent that keeps her from moving while he administers a very special kind of torture: a barrage of the corniest jokes you’ve ever heard in your life. But Diana triumphs by retreating into herself to make contact with Pan, the god of dance, who bestows upon her the gift to move out of her frozen state. In a single punch, The Joker was summarily clobbered. 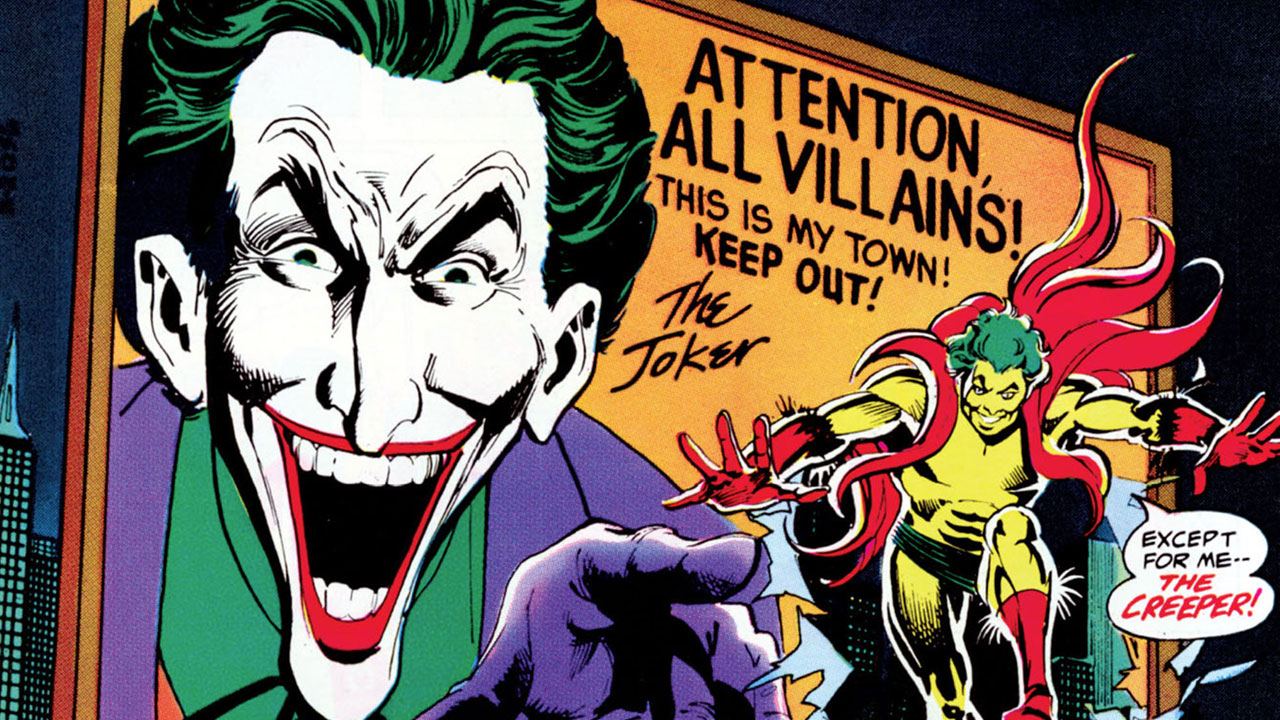 Though short-lived, The Joker’s own 1975 ongoing series saw him knock gloves with an exotic variety of adversaries in each issue. One of the most colorful: WHAM-TV reporter Jack Ryder, better known to Outsiders as The Creeper. When The Joker embarks on one of his typical crime sprees, Jack decides to do his pal Batman a solid by taking care of the mess himself — only after a knock-down fight, it proves a little bit more than he can handle when The Joker cocks him cold. When Creeper awakens, it’s without any memory of his identity. So naturally, what else can Joker do but take advantage? The Joker insinuates that he and Creeper are old friends and partners in crime, only to dispose of him when he’s outlived his usefulness. But as Creeper’s transformation wears off, Jack Ryder remembers everything. He maintains the illusion of his amnesia just long enough to get the jump on an unsuspecting Joker, who often came out the loser even in his own series. 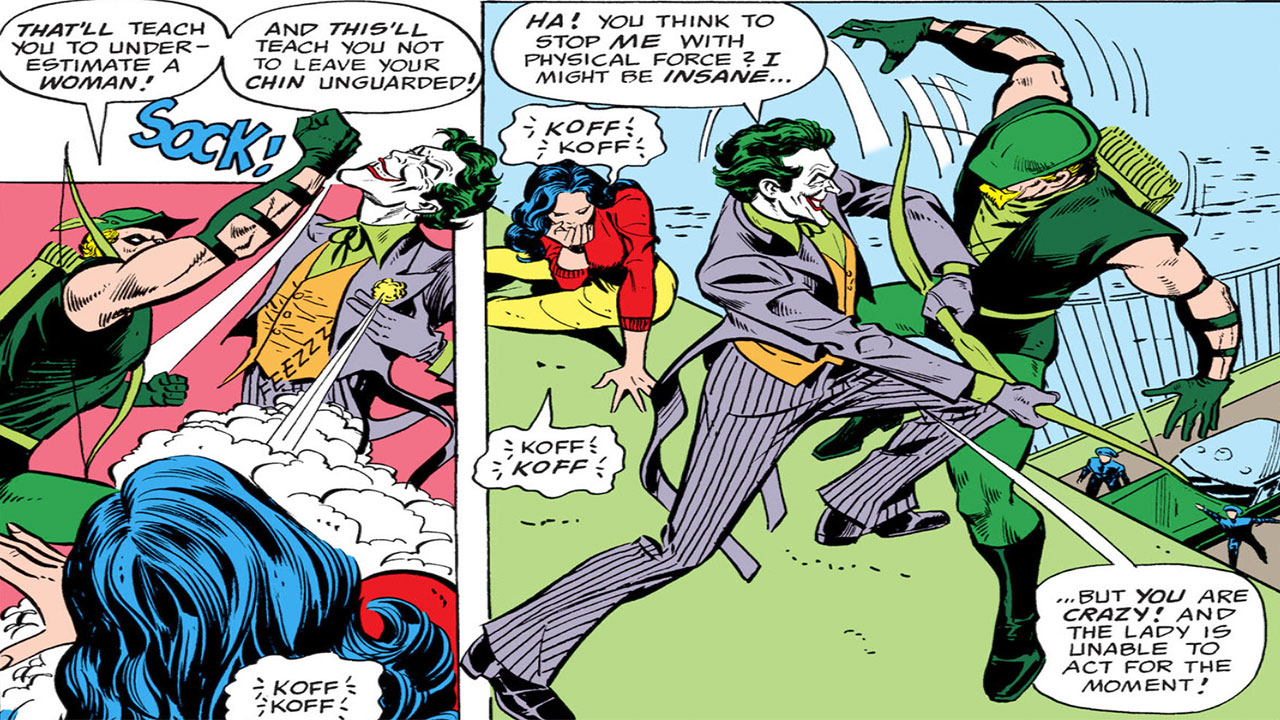 In the very next issue, The Joker runs afoul of Green Arrow in a deadly game of love and war. Utterly smitten at first sight with the lovely Dinah Lance, The Joker resolves that the Black Canary must be his or no one’s at all As The Joker absconds with his prize, Green Arrow pursues with a barrage of trick arrows, countered in turn with laughing gas bombs. Though The Joker claims victory in their first two encounters, fortunes shift when he appears to drop Dinah from the top of a suspension bridge. With what would be an impossible shot for anyone else, Oliver fires an arrow which ends up saving the plummeting Dinah and sending Joker to his watery doom in a single pull. And that was how Green Arrow finally killed The Joker… until he turned up unharmed in the next issue. It’s an annoying habit of his. 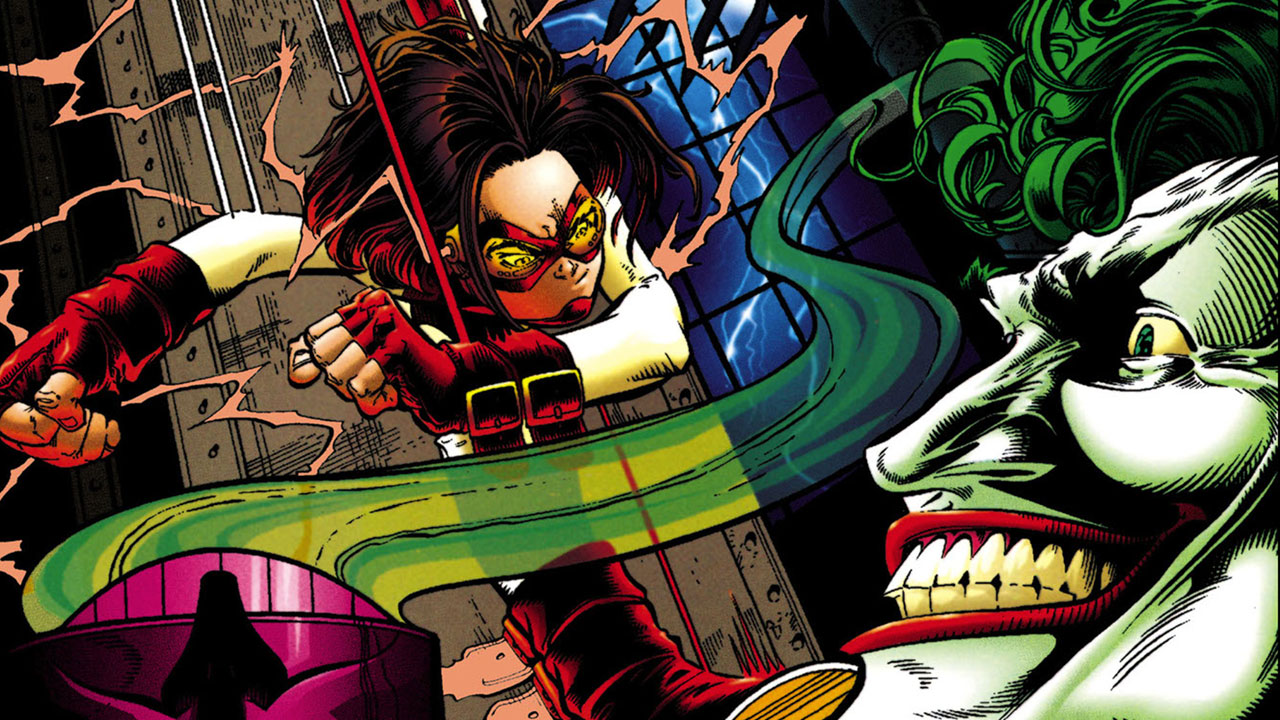 In this landmark issue for the snack-sized speedster Bart Allen, Impulse finds himself facing perhaps the only villain with a bigger mouth than his own: you guessed it, the J-Man himself. As April Fool’s Day dawns on Gotham City, Bart comes to town to check in with his buddy Tim Drake — only to find that Robin, Batman, and Commissioner Gordon are all being held hostage by The Joker on his favorite holiday. Spying Impulse’s attempts to free his friend, Joker embroils Bart in a series of compulsory pranks across the world. Compliance, of course, is optional… as long as he doesn’t mind The Joker springing his death trap on his captives. By completing the pranks and stalling for time, Bart buys Batman the opportunity to escape from captivity and sabotage The Joker’s plans — and with one last prank of his own, Bart manages to scare Joker out of hiding long enough for Batman to put him away. 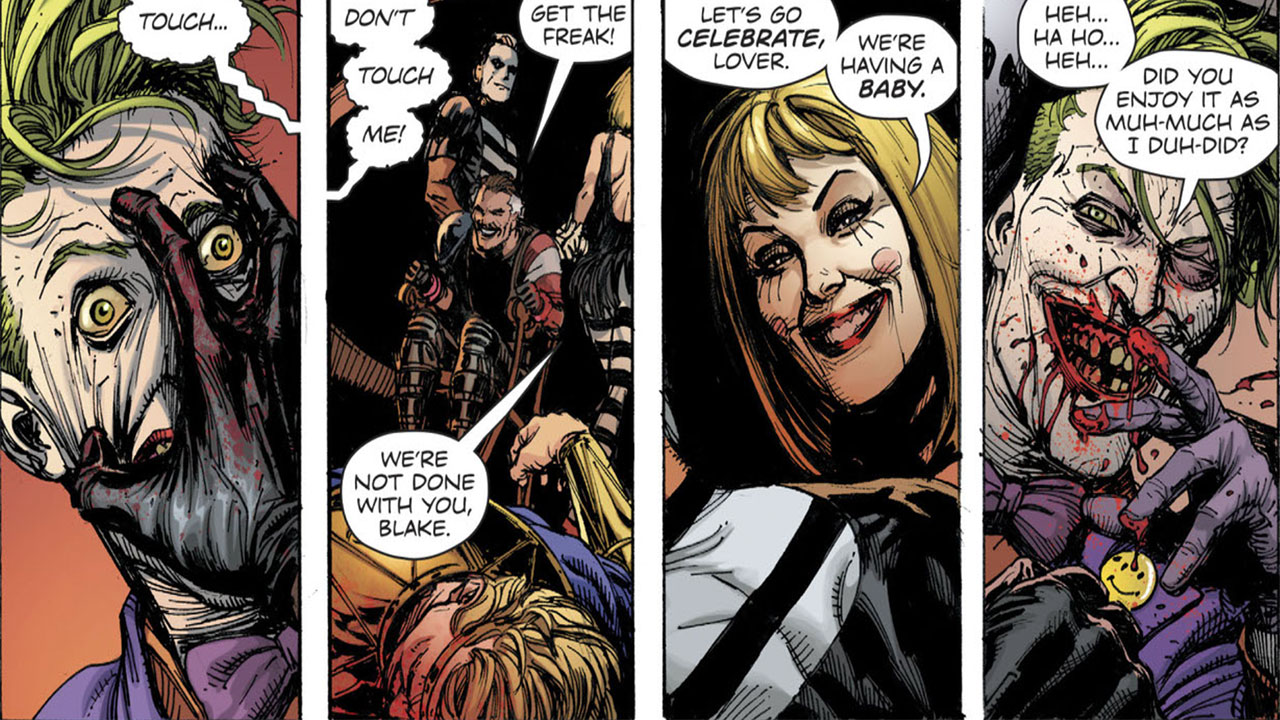 As the second half of Geoff Johns and Gary Frank’s crossover sequel to ‘Watchmen’ begins, threads begin to converge and unravel. United with Batman, The Joker, Ozymandias, The Comedian, and Doctor Manhattan, the heir to Rorschach’s mantle learns the horrible (and in hindsight, rather obvious) truth that Ozymandias has been manipulating him all along to work alongside his sworn enemy. The Joker, for his part, find this *hilarious.* Which is why Rorschach proceeds to beat the snot out of him. The Joker doesn’t try too hard to fight back. Any damage he could do to this poor man would pale in comparison to the betrayal eating him up inside. Joker ends up bloody and broken on the floor, but the loss assuredly goes to Rorschach. 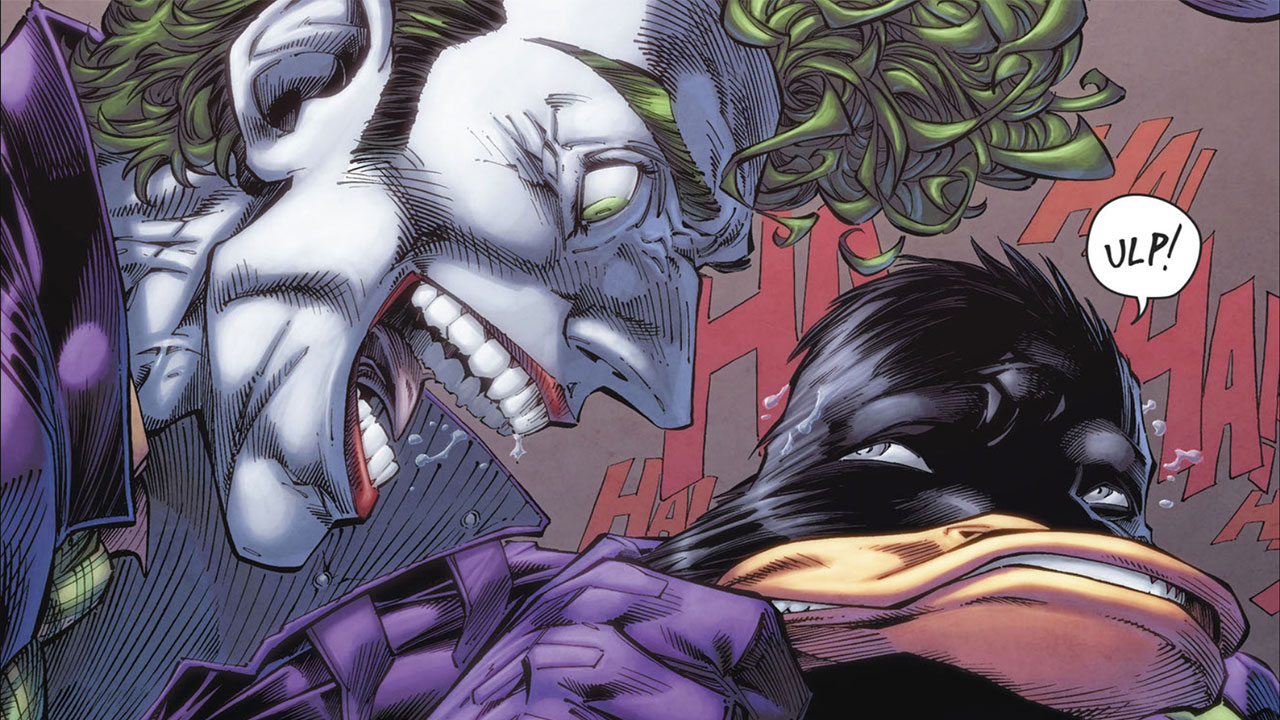 Wait… THAT Daffy Duck? It’th true, buthter. In 2018’s wave of DC/Looney Tunes crossover specials, Bugs Bunny’s hotheaded rival runs a-fowl of The Joker when he attempts to take a complaint all the way to Gotham City’s Acme Corporation warehouse. Guess who’s been using it as a hideout? Clearly in way over his beak, Daffy attempts to slink away, but finds himself enlisted in Joker’s latest cockamamie scheme. Though he carefully sabotages Joker’s efforts from inside through feigned incompetence, a last minute outburst at Batman leads to both Joker and Daffy’s incarceration at Arkham Asylum. Talk about a dethpicable thituathion.

What's your favorite Joker story? Talk about it in our Community!