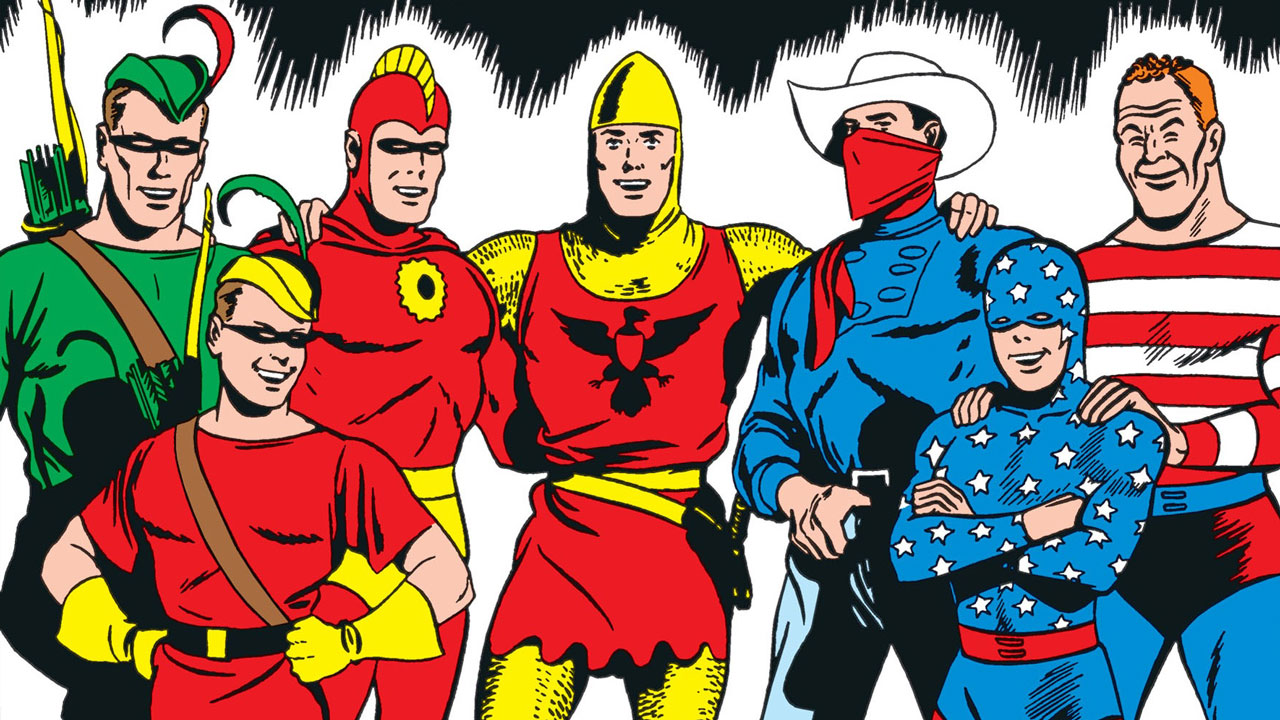 If you’ve been watching DC Universe’s Stargirl then you might have caught a cool little Easter egg several weeks ago. In the recent episode “Brainwave,” Pat shows Courtney a photo of the Seven Soldiers of Victory, a team of Golden Age lawmen. And in this week's episode, "Shining Knight," we get to meet one of the team's members! Although the Seven Soldiers never got the name recognition the Justice Society had, they still hold their own special place in the history of the DC Universe. If Stargirl has you curious, here are 7 facts about the Seven Soldiers of Victory.

1.) THEY HAD A UNIQUE LINEUP 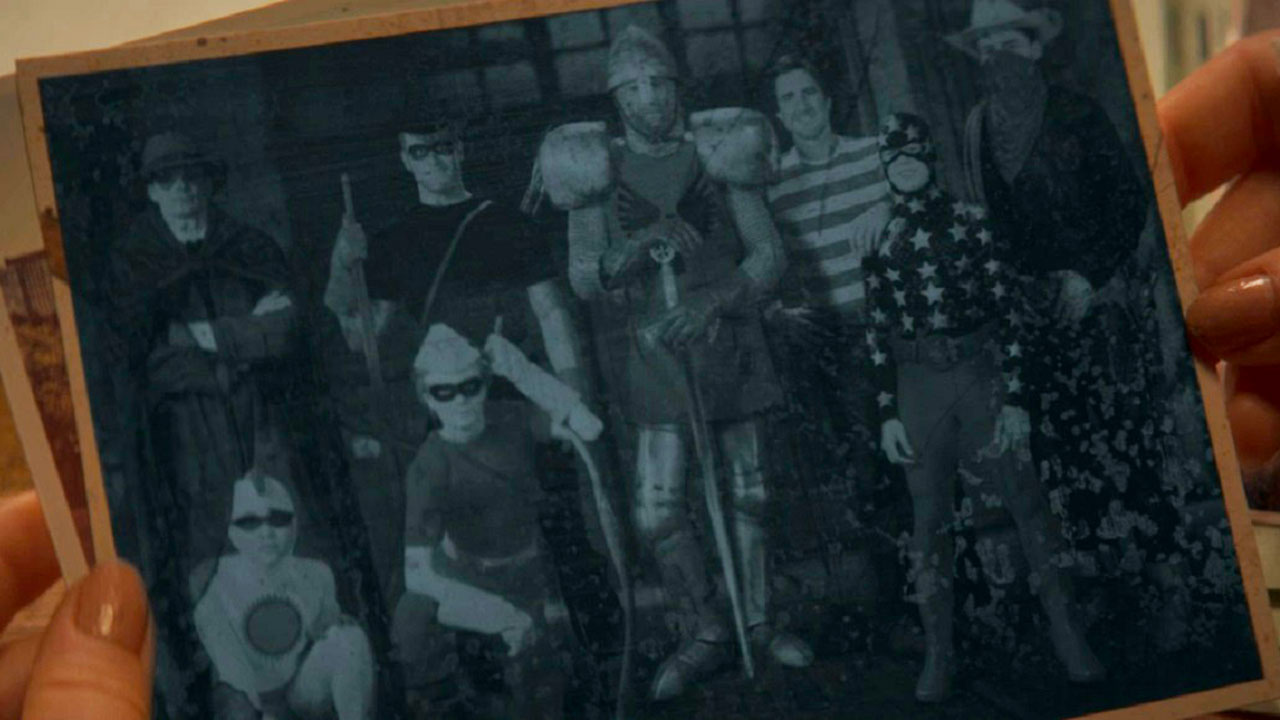 The original Seven Soldiers was a diverse group of heroes from various backgrounds and even time periods!

Speedy – Green Arrow’s sidekick, and an expert archer himself.

Star-Spangled Kid – A young boy whose sense of patriotism inspired him to become a crime-fighter.

Stripesy – Chauffeur and adult sidekick to the Star-Spangled Kid.

Crimson Avenger – A noir-inspired vigilante armed with a gas gun. 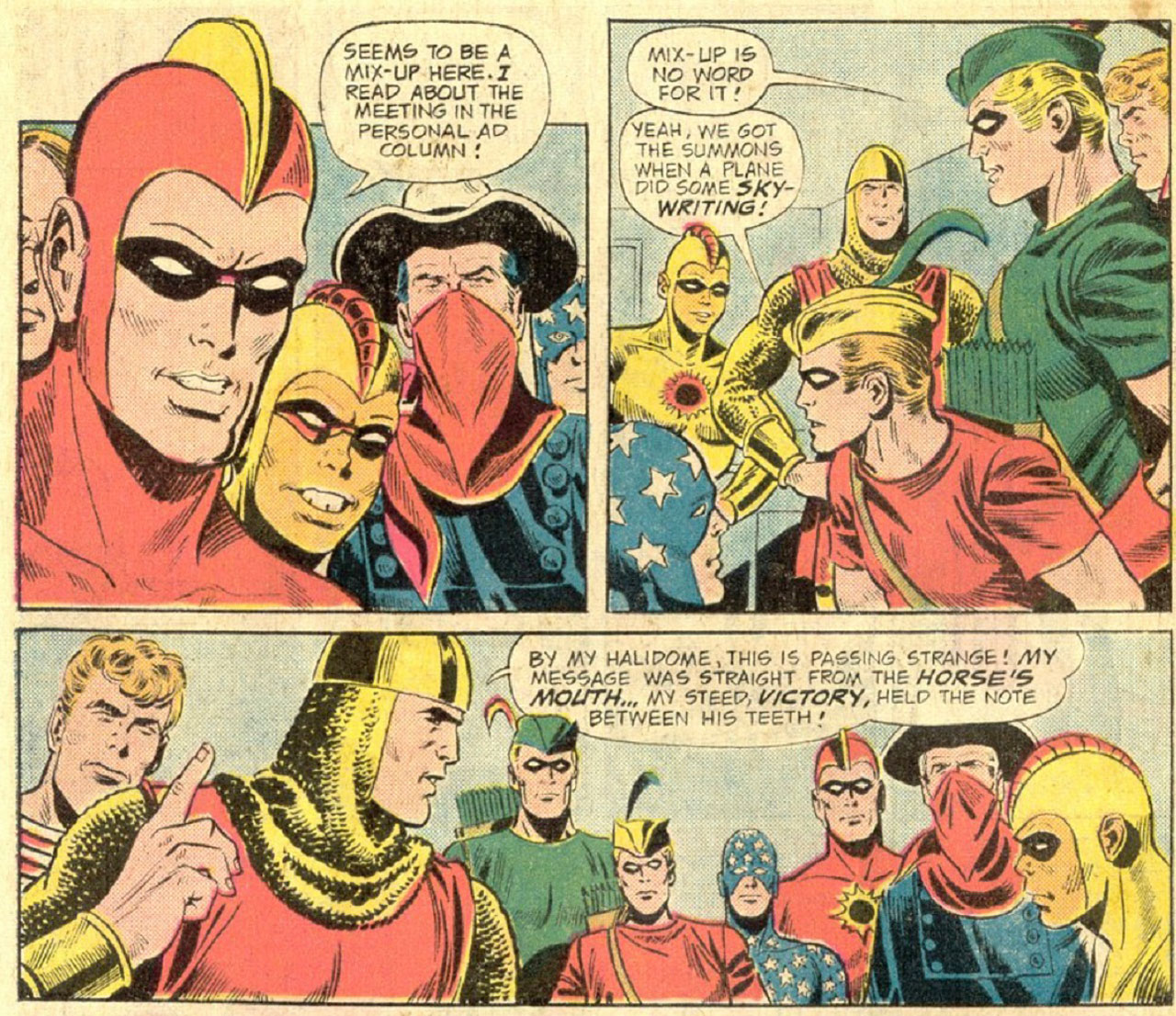 Yes, the team consists of 8 heroes, not 7. That’s because Wing’s place in the group was debated. Although other sidekicks like Stripesy and Speedy were considered official members, Wing’s status was more ambiguous. (The Shining Knight’s horse Winged Victory was also considered an unofficial member, but that’s another story.) The group also called themselves Law’s Legionnaires, which got around the math problem, but the name never stuck the way Seven Soldiers of Victory did. In 1972’s Justice League of America #102, Wing was finally recognized as an official Soldier after the other members learned he sacrificed himself to save the world from the Nebula Man.

3.) THE TEAM WAS FORMED BY A VILLAIN 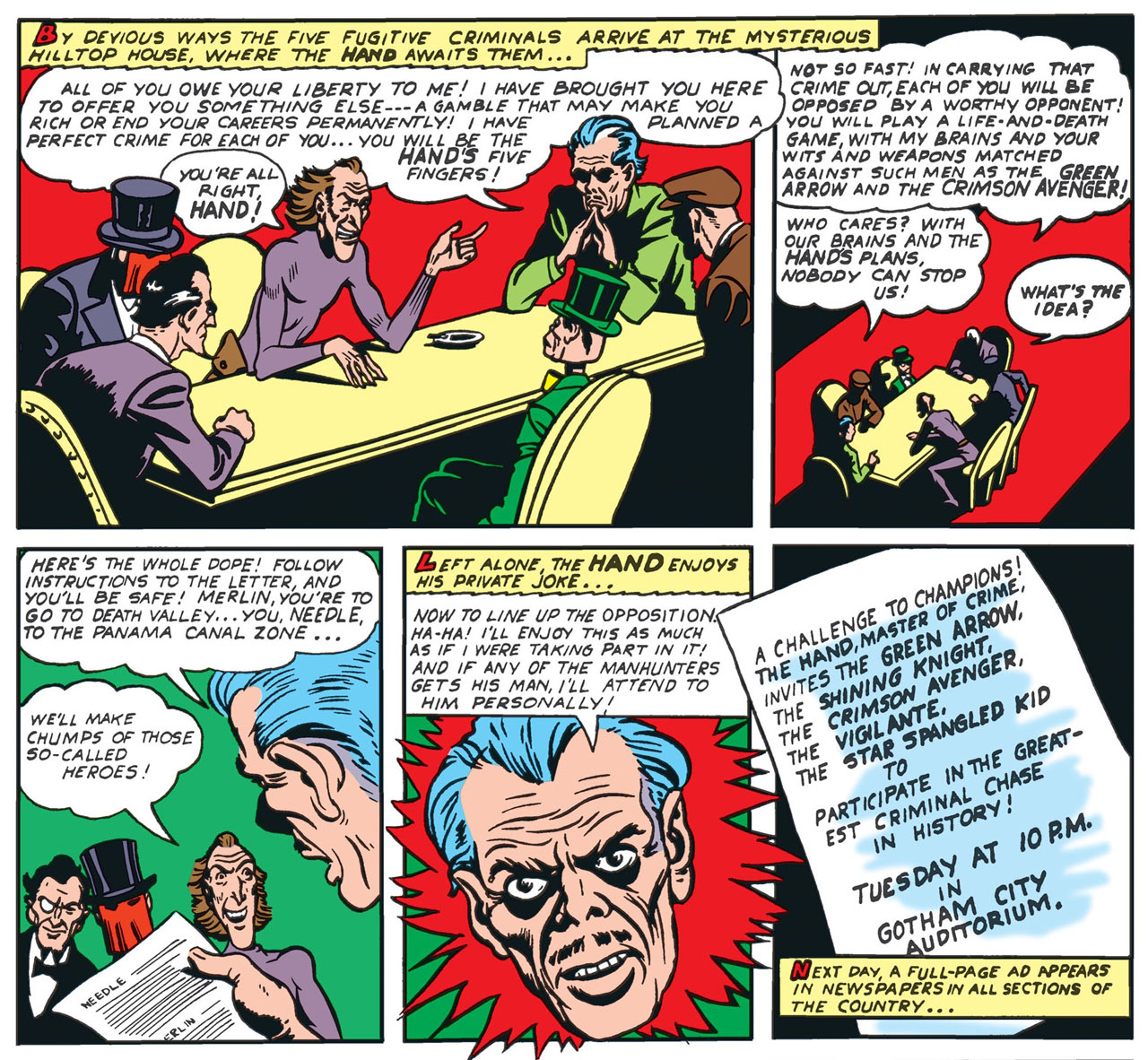 In a weird case of misplaced arrogance, a villain known as the Hand brought the Seven Soldiers together. In the group's debut adventure in 1941’s Leading Comics #1, the Hand planned a series of elaborate crimes, and he tried to prove how clever he was by challenging the heroes to stop him. The overconfident criminal placed a newspaper ad calling the heroes together so he could tell them his plan. As you can imagine, the group put a stop to the Hand’s crimes, arrested his underlings, and decided to make their get-together’s a regular occurrence.

4.) THEIR FINAL GOLDEN AGE STORY WAS LOST FOR DECADES 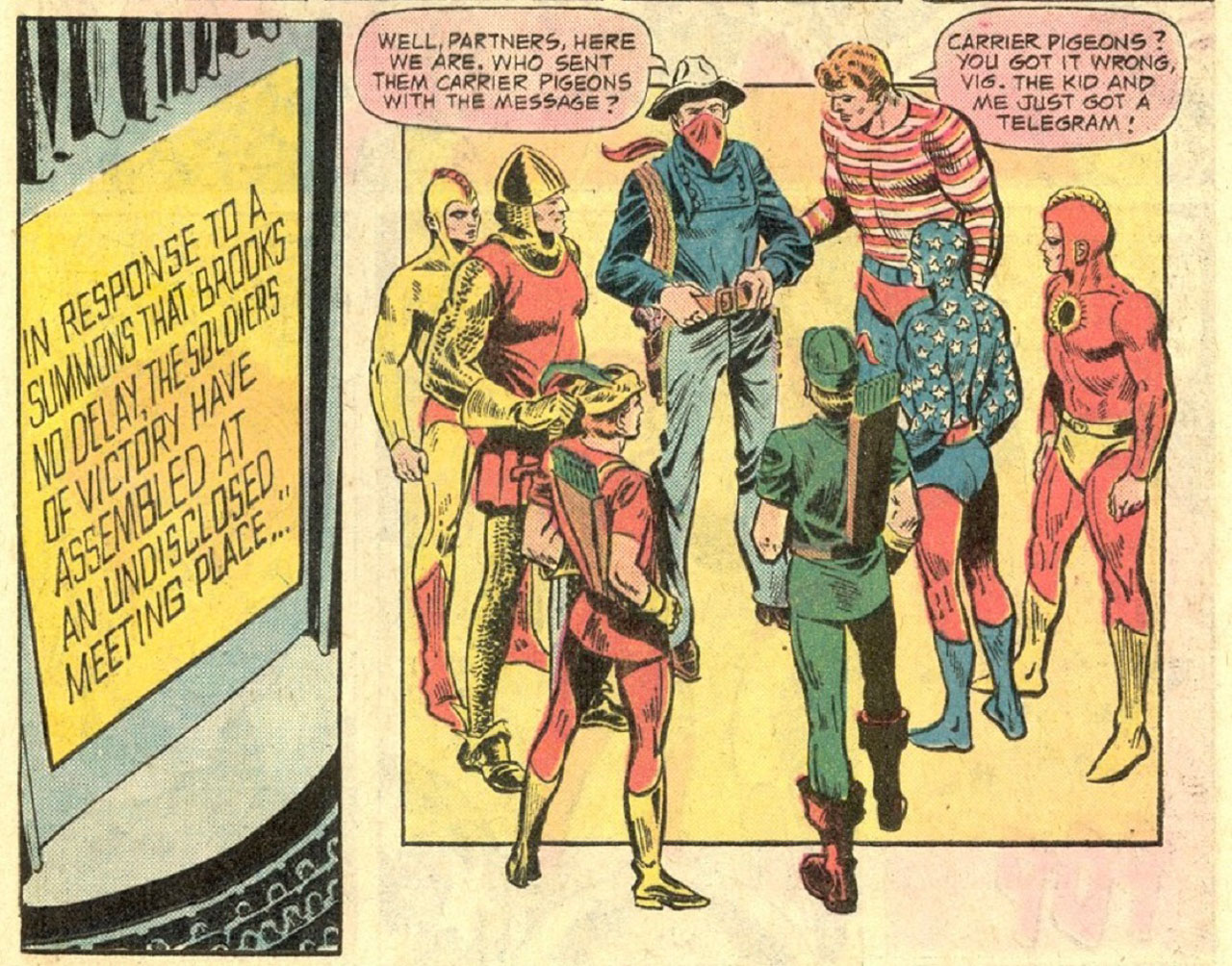 The Seven Soldiers starred in Leading Comics for the title’s first 14 issues. The group never got as popular as the Justice Society, and with Leading Comics #15 the title became a humor magazine while the heroes continued their solo adventures in other comics. Before this shift, a Seven Soldiers story was written for Leading Comics #15, and it was left unpublished for thirty years. In 1975, Joseph Samachson’s script was finally published in Adventure Comics #438-443, with brand-new art from Bronze Age artists like Dick Dillin, Mike Grell, and Jose Luis Garcia-Lopez.

5.) THEY HAD A LITERAL TIMEOUT 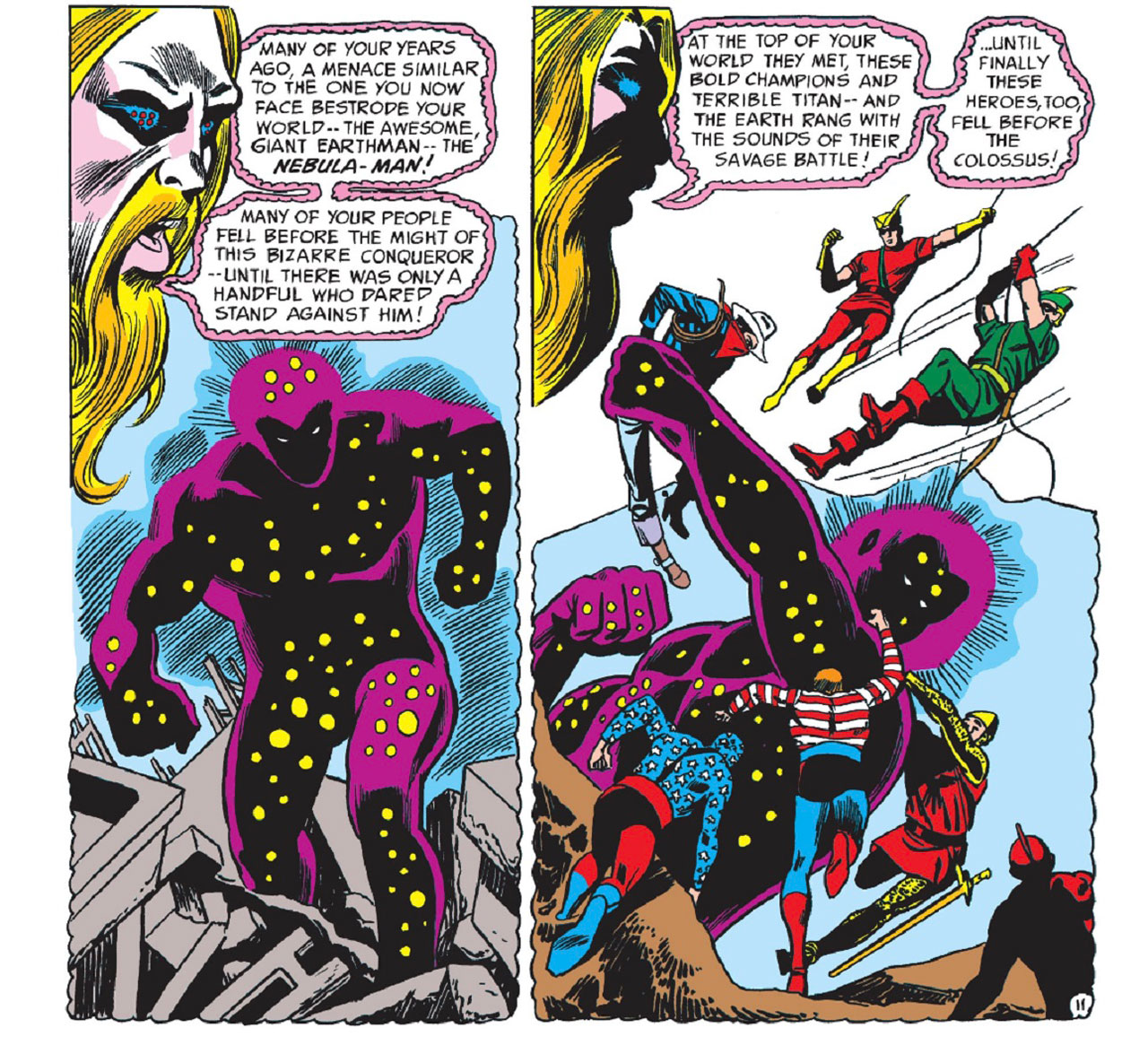 After their final Golden Age appearance in Leading Comics #14, the group next appeared 27 years later -- in 1972’s Justice League of America #100-102. In this adventure, as the JLA celebrates its 100th meeting, it's called by the Justice Society to Earth-Two, where both groups learn they must rescue the time-displaced Seven Soldiers of Victory to prevent an oncoming apocalypse. The Seven Soldiers had been scattered throughout the timestream during a battle with Nebula Man. The Justice Society and Justice League rescued the Soldiers, and all three teams joined forces to stop the Iron Hand, a rebranded version of the villain who'd recruited the Soldiers decades earlier. This story brought the Seven Soldiers back from obscurity, and brought new life to forgotten characters like the Star-Spangled Kid.

6.) THEY HAD A 'JUSTICE LEAGUE UNLIMITED' TRIBUTE EPISODE 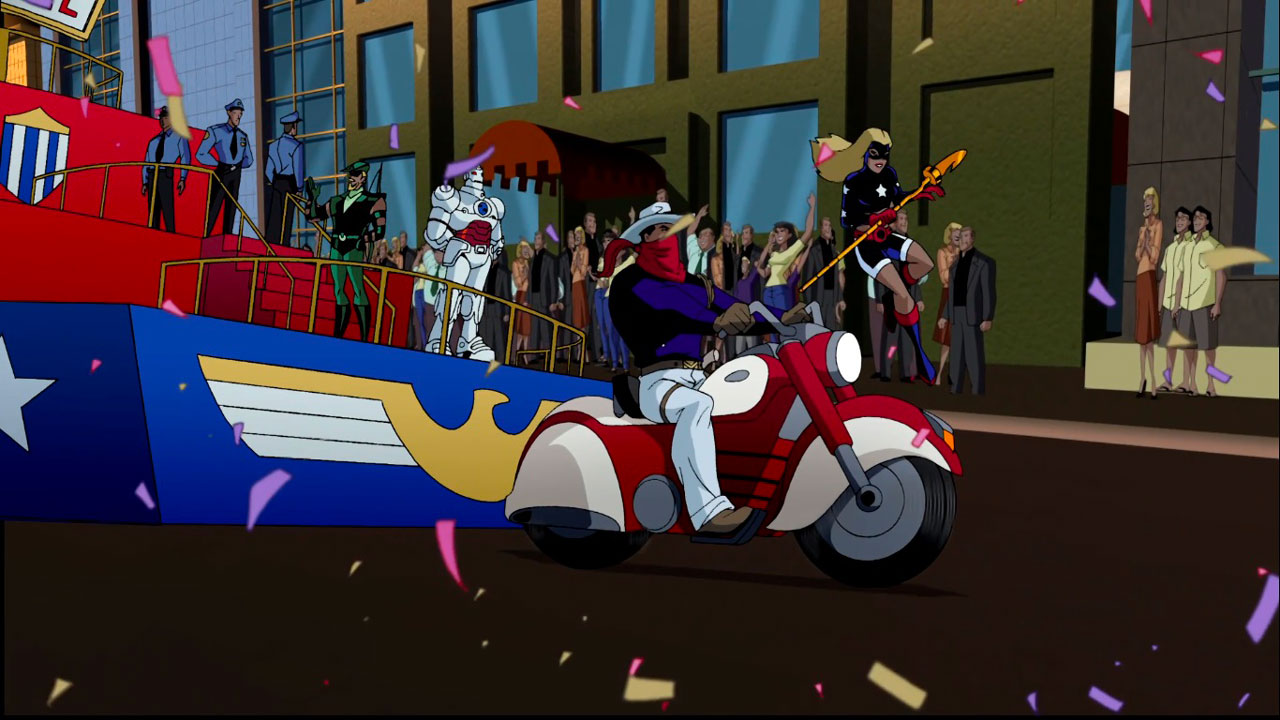 The Seven Soldiers enjoyed a tribute episode in the second season of Justice League Unlimited. “Patriot Act” features Stargirl, S.T.R.I.P.E., Shining Knight, Green Arrow, Vigilante, Speedy, and the Crimson Avenger fighting against a mutated General Eiling. Since the episode took place in the 21st century, Stargirl stood in for the Star-Spangled Kid and Pat Dugan piloted S.T.R.I.P.E. instead of fighting as Stripsey. The episode featured a fun battle sequence that showcased each of the heroes' unique abilities, with the addition of a few other Golden Age heroes like the Newsboy Legion. 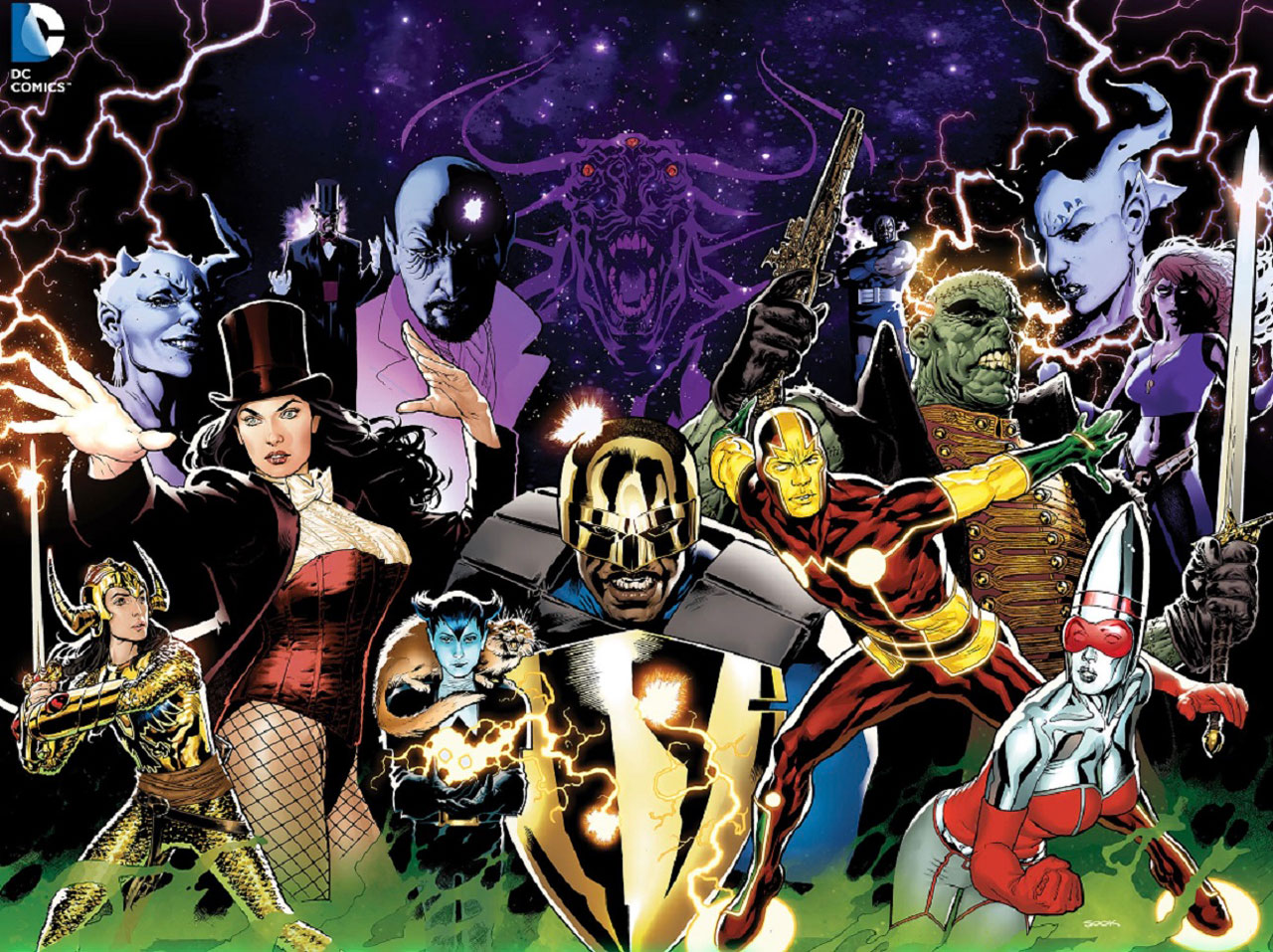 In 2005, writer Grant Morrison developed a new take on the Seven Soldiers – they were a team that wasn’t really a team. The adventure began in Seven Soldiers #0 before splitting up across 7 limited series. Each series followed a different hero (Zatanna, Mister Miracle, Klarion, Shining Knight, Frankenstein, Manhattan Guardian, and Bulleteer), each set in a different genre, with art by a different creator. After all the series were published, the story concluded with Seven Soldiers #1. It’s unusual for a team to go through an entire event without meeting one another, but if this list has taught us anything, it’s that the Seven Soldiers have never been your typical team.

Who’s your favorite member of the Seven Soldiers of Victory? Let us know in our Community!