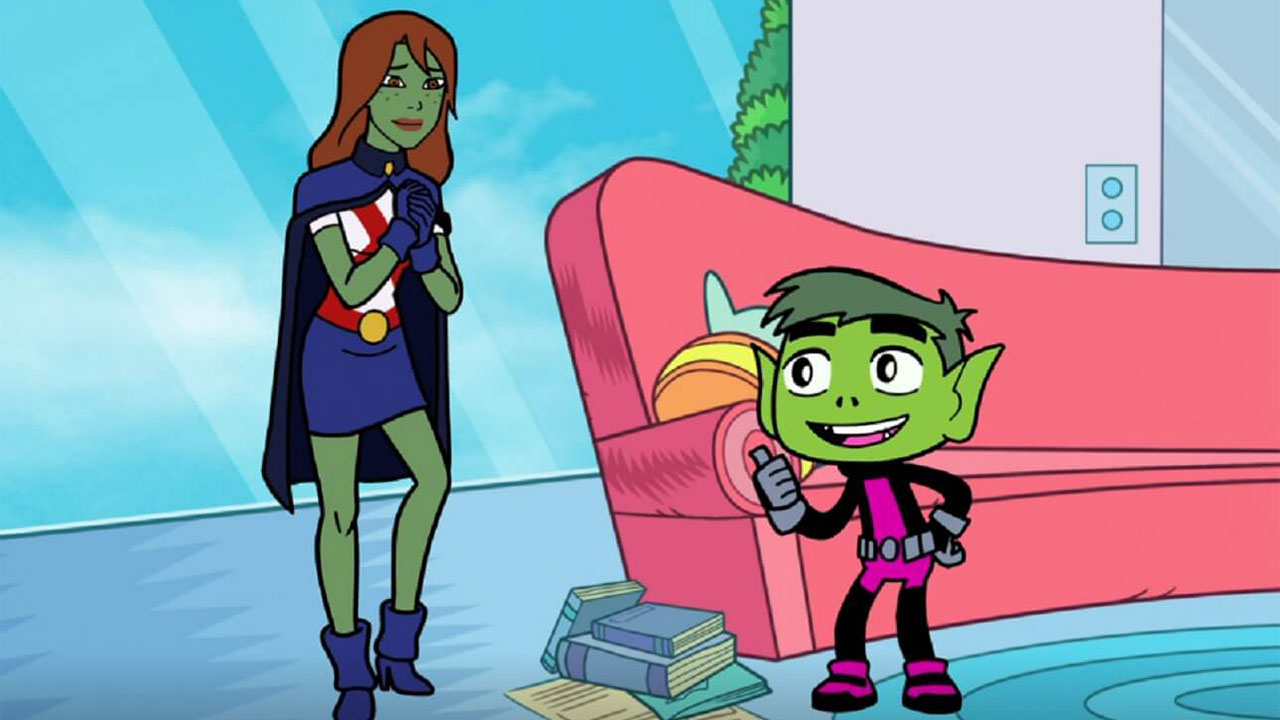 They say it’s not easy being green, but some people sure make it look fun! The DC Universe is a diverse place, full of colorful heroes, and quite a few of these know how to rock an emerald tone! While some folks paint themselves to celebrate Saint Patrick’s Day, these guys and gals radiate the Irish spirit every day of the year. Here are 7 of the most notable... 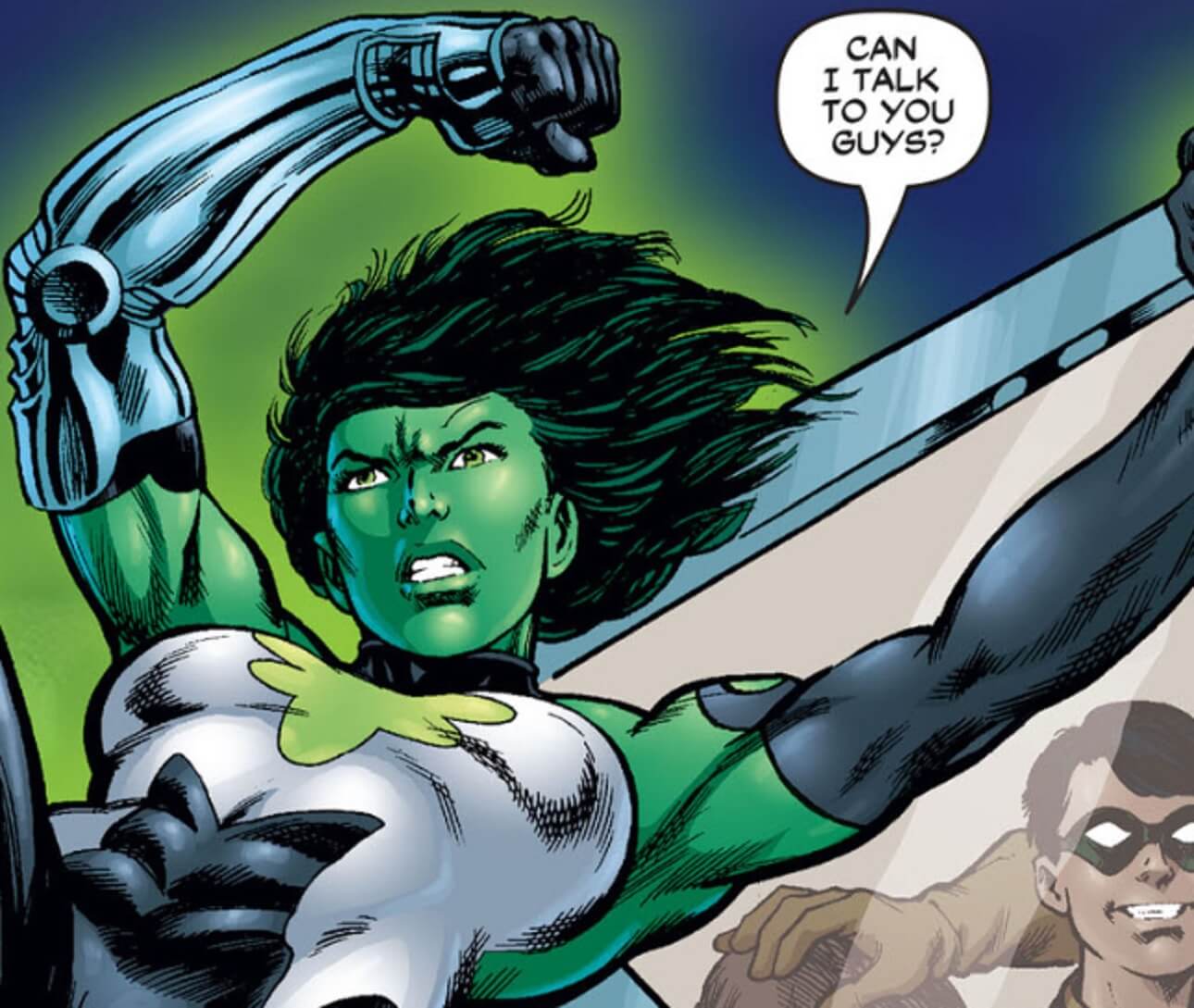 WHY GREEN?: Jade’s father Alan Scott was a Green Lantern whose genetics was altered by magic energies. As a result, Jade was born with chlorophyll skin.

BIO: Jennifer Lynn-Hayden was the daughter of Green Lantern Alan Scott and the vigilante Rose. She has all the powers of a Green Lantern but doesn’t need a ring to manifest them. Jennifer set out to become a hero and took the code name Jade. She’s been a member of the Green Lantern Corps, Infinity Inc, the Outsiders, the Justice League and more. 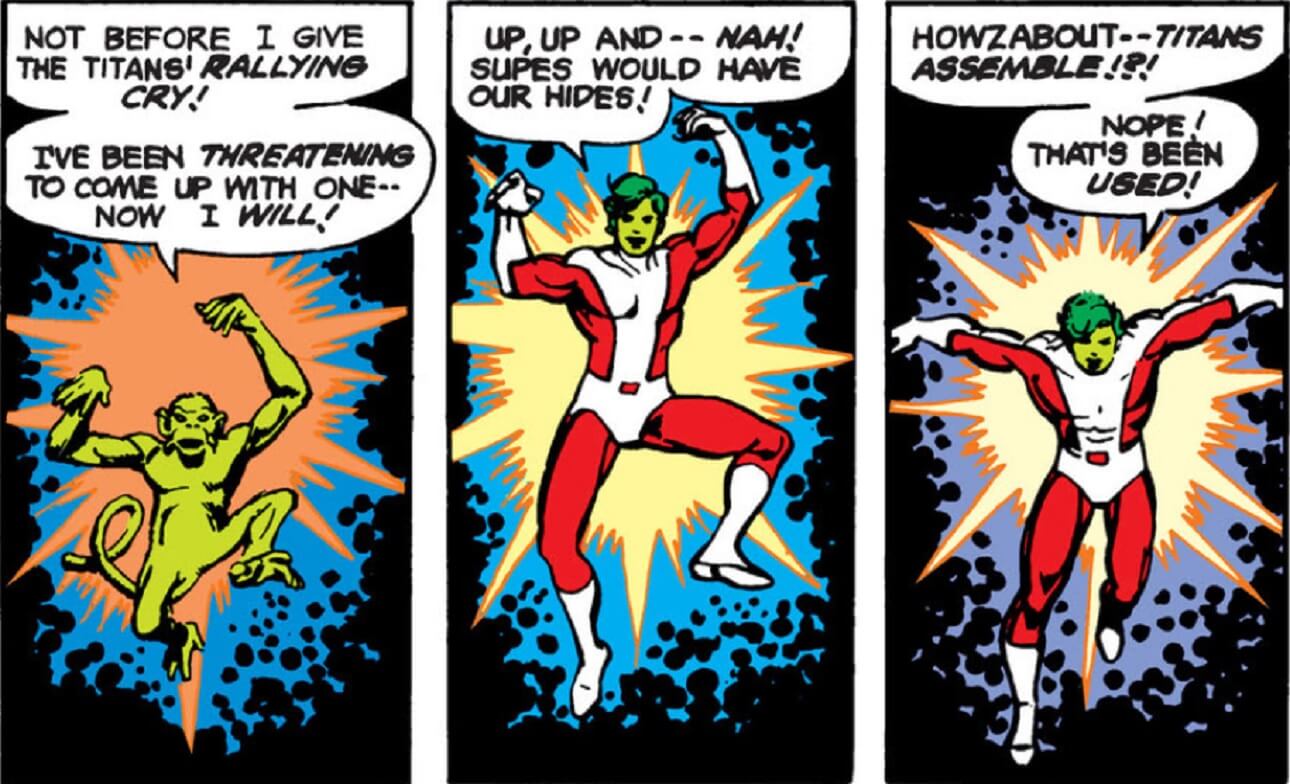 WHY GREEN?: Gar Logan’s father combined his son’s DNA with genetic material from a green monkey. The procedure changed Gar’s pale complexion to a jolly green!

BIO: After his father’s genetic procedure turned Gar’s skin green, he discovered that he had the power to transform into any animal. Various criminals took advantage of the young boy’s powers after his parents died, until Gar joined the Doom Patrol under the name Beast Boy. When the first incarnation of the Doom Patrol perished, Beast Boy tried his hand at a career in Hollywood before hooking up with the New Teen Titans. Beast Boy’s fun-loving sense of humor helps lighten the mood for his teammates when superheroics get a bit too serious. 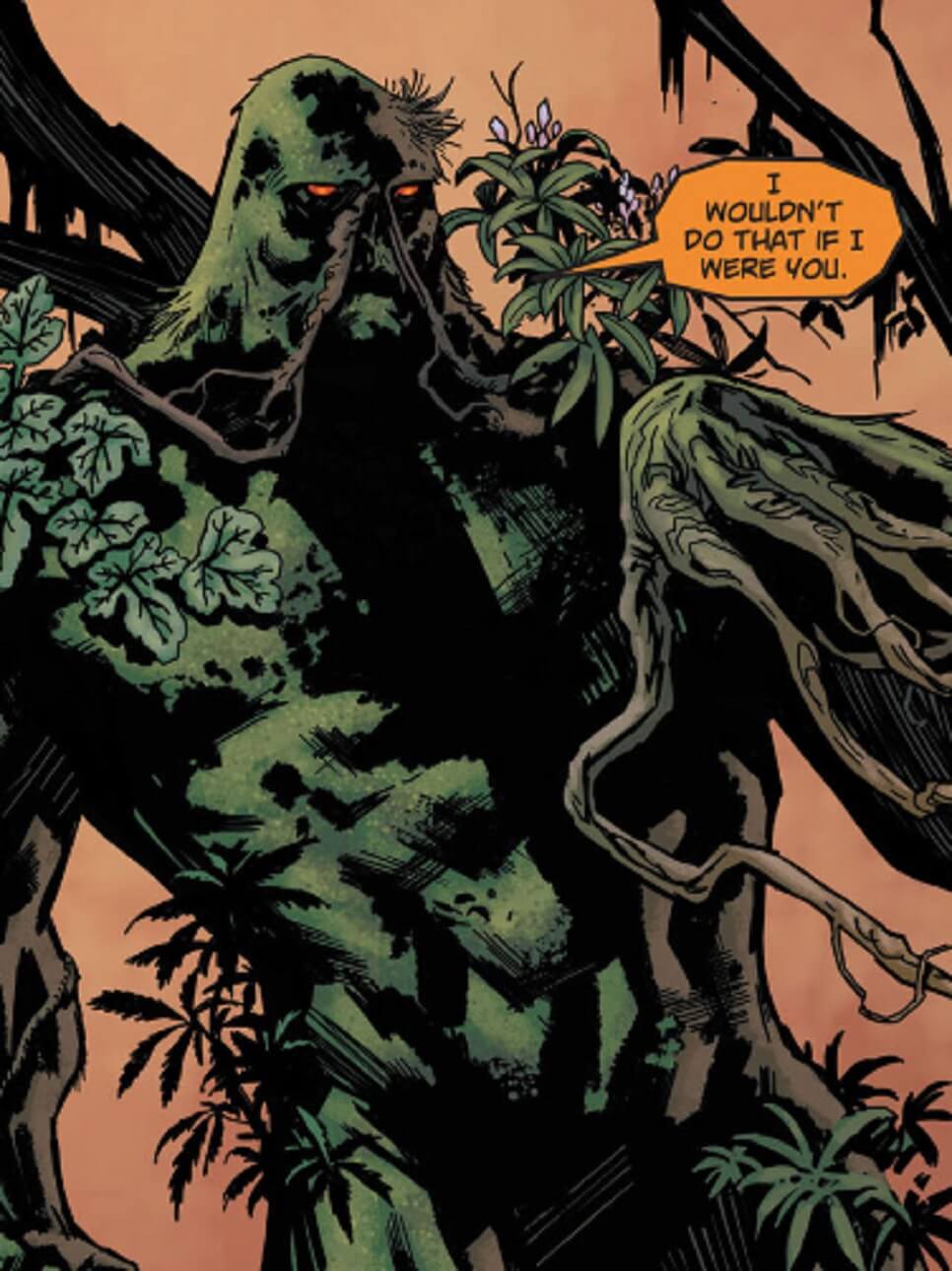 WHY GREEN?: A lab explosion fused the consciousness of Alec Holland with the swamp in which he worked, creating a new being who became the avatar and champion for the aptly named Green.

BIO: The Green is the force that connects all plant life on Earth, and Swamp Thing became its protector after he was created. Although Swamp Thing fights some of the DC Universe’s most cosmic and supernatural foes, he’s content to live a simple life in the Louisiana swamp. His form may be monstrous and intimidating, but Swamp Thing is very gentle and loving, as long as you don’t hurt the ones he loves. Swamp Thing has a soft spot for Abby Arcane, who's helped him maintain a link to humanity. 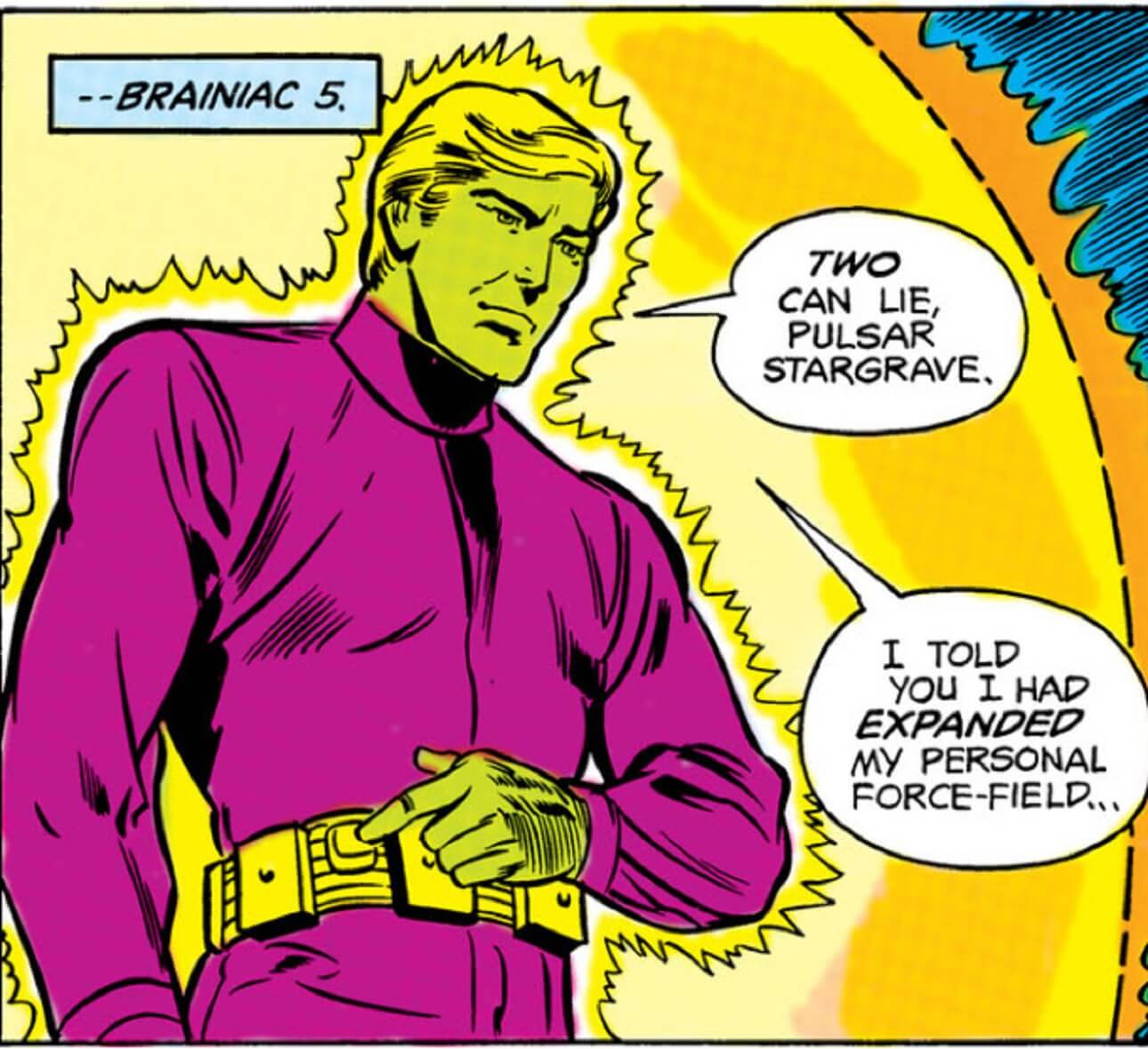 WHY GREEN?: Brainy is a Coluan, which means his skin is naturally green!

BIO: Although Querl Dox is descended from the original Brainiac, he shares none of his villainous traits. Brainiac 5 wanted to redeem the legacy of his ancestor, so he joined the Legion of Super-Heroes. While Querl may not have powers like his teammates do, his supreme intellect has helped the team defeat many foes and save the galaxy. Querl even improved upon the force field belt invented by the original Brainiac, and modified it to help the Legion fight evil.

WHY GREEN?: M’gann was born as a White Martian, but used her shapeshifting powers to look like a Green Martian.

BIO: Like J’onn J’onzz, M’gann M’orzz immigrated to Earth to become a hero. Unlike the Martian Manhunter, however, Miss Martian is actually a White Martian, a fact she initially hid from her teammates in the Teen Titans. The Titans accepted M’gann upon learning the truth, and she became a valued member of the team. Despite the history between White Martians and Green Martians, J’onn too accepted M’gann as family and has worked to help her adapt to life on Earth. 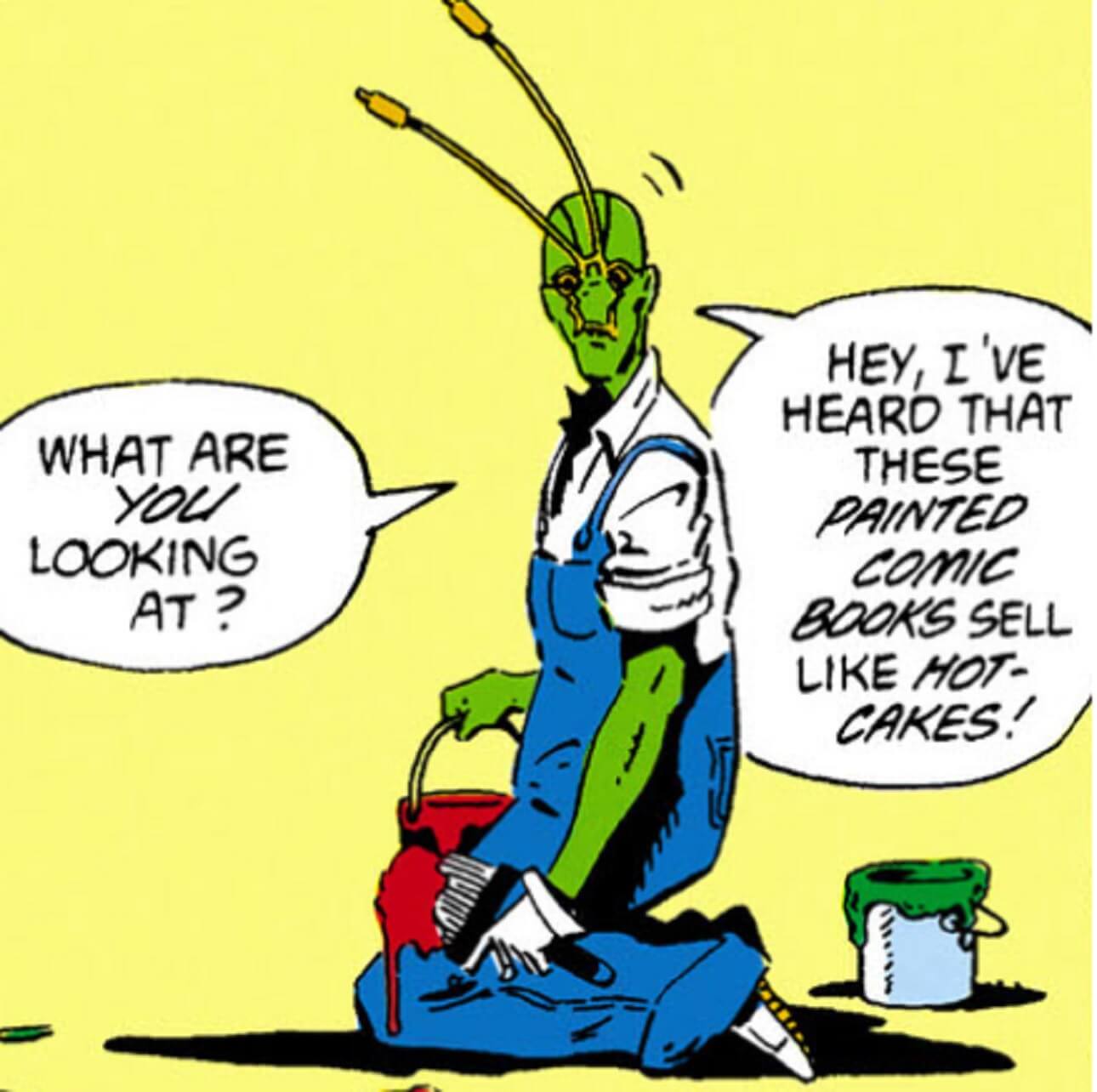 WHY GREEN?: Irwin Schwab found a green teleportation suit that become permanently grafted to his body – IF he’s telling the truth about his origin. (With Irwin, you can never be sure.)

BIO: Ambush Bug’s origin stories are contradictory, since he’s not the most reliable narrator. His suit gives him cosmic awareness, causing him to break the fourth wall, but the side effect is possible insanity. Ambush Bug also has the power of teleportation and invulnerability, which he’s used to help the Doom Patrol and other heroes. But due to his annoying nature, his assistance isn’t always welcomed. 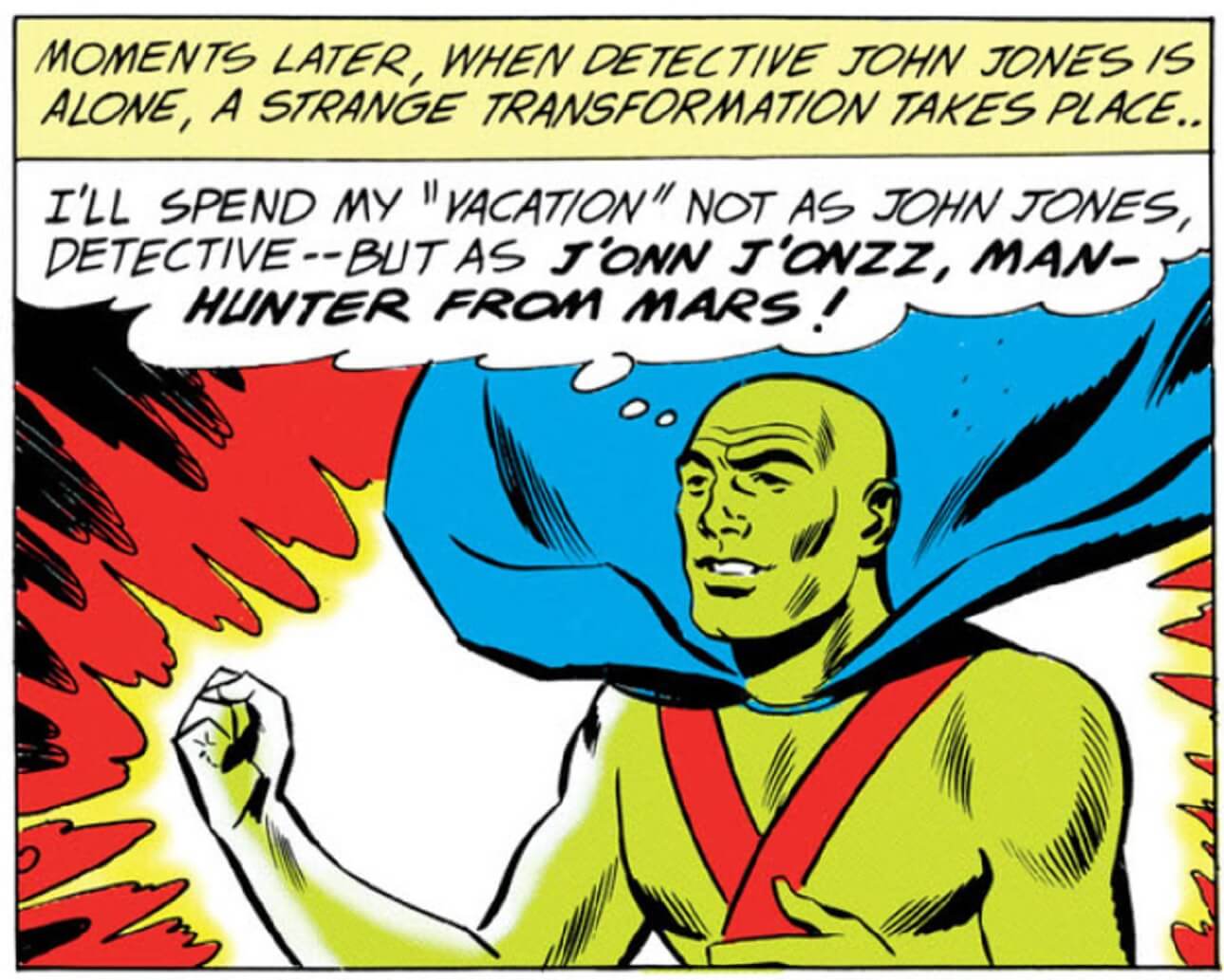 WHY GREEN?: He was born that way. It’s a Martian thing!

Bio: When J’onn J’onzz’s species was wiped out, he left his home on Mars and immigrated to Earth. J’onn adopted the human identity of John Jones and became a detective. J’onn took on the superhero name Martian Manhunter and used his Martian abillties (flight, telepathy, and shape-shifting) to solve the problems he couldn’t as a detective. J’onn helped found the Justice League and became one of the greatest heroes of his adopted planet.

Which of DC's heroes would you most like as Saint Patrick’s Day pub pal? Let us know in our Community!