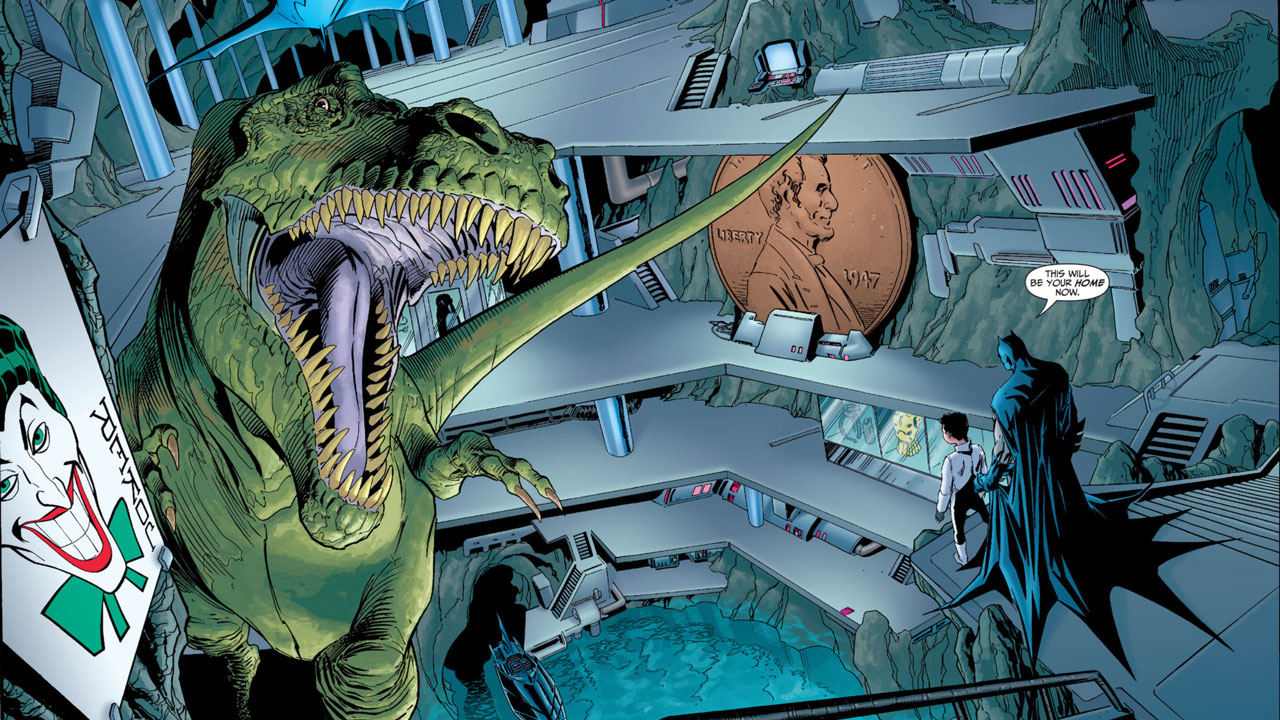 The 7 Coolest Items in the Batcave

With its technological advances in crime-fighting, an ever-expanding trophy room honoring the wildest villains the Caped Crusader has defeated, and a host of high-powered vehicles, weapons, and devices, the Batcave is a dazzling shrine to Batman’s career against evil. Let’s look at seven of the coolest items found deep within the Batcave! 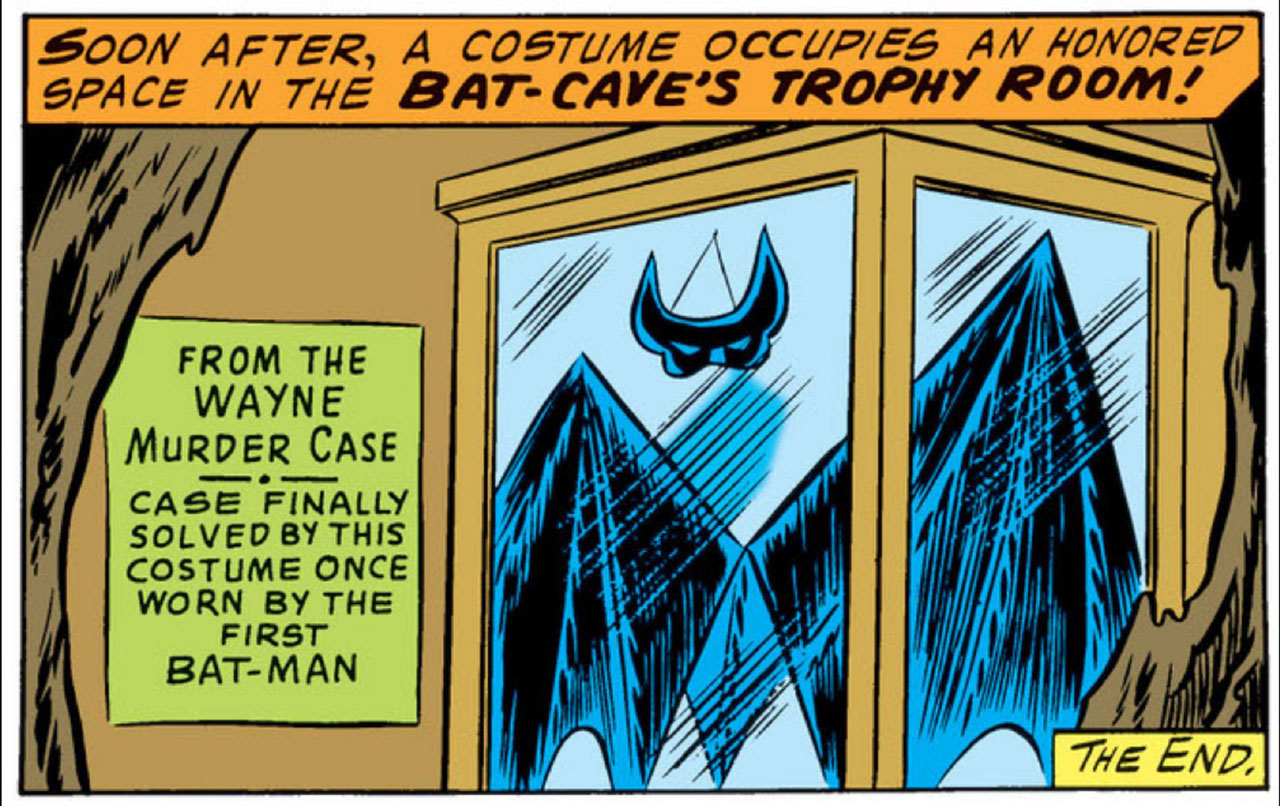 One of the oddities found in the Batcave is this rough precursor to the Batsuit. Even stranger is the inscription describing it as a suit “worn by the first Bat-Man.” What could this be, and why is “Batman” written with a hyphen? The answer lies in Detective Comics #235 (reprinted in Batman #255), where we learned that many years ago, Thomas Wayne attended a costume party wearing this costume. A fight ensued when he got tangled up with mobsters, leading to their arrest. But years later they got their revenge by orchestrating the Wayne murder! This backstory has been faded out of continuity, but the Thomas Wayne Bat-Man suit still frequently appears in the cave’s trophy room. 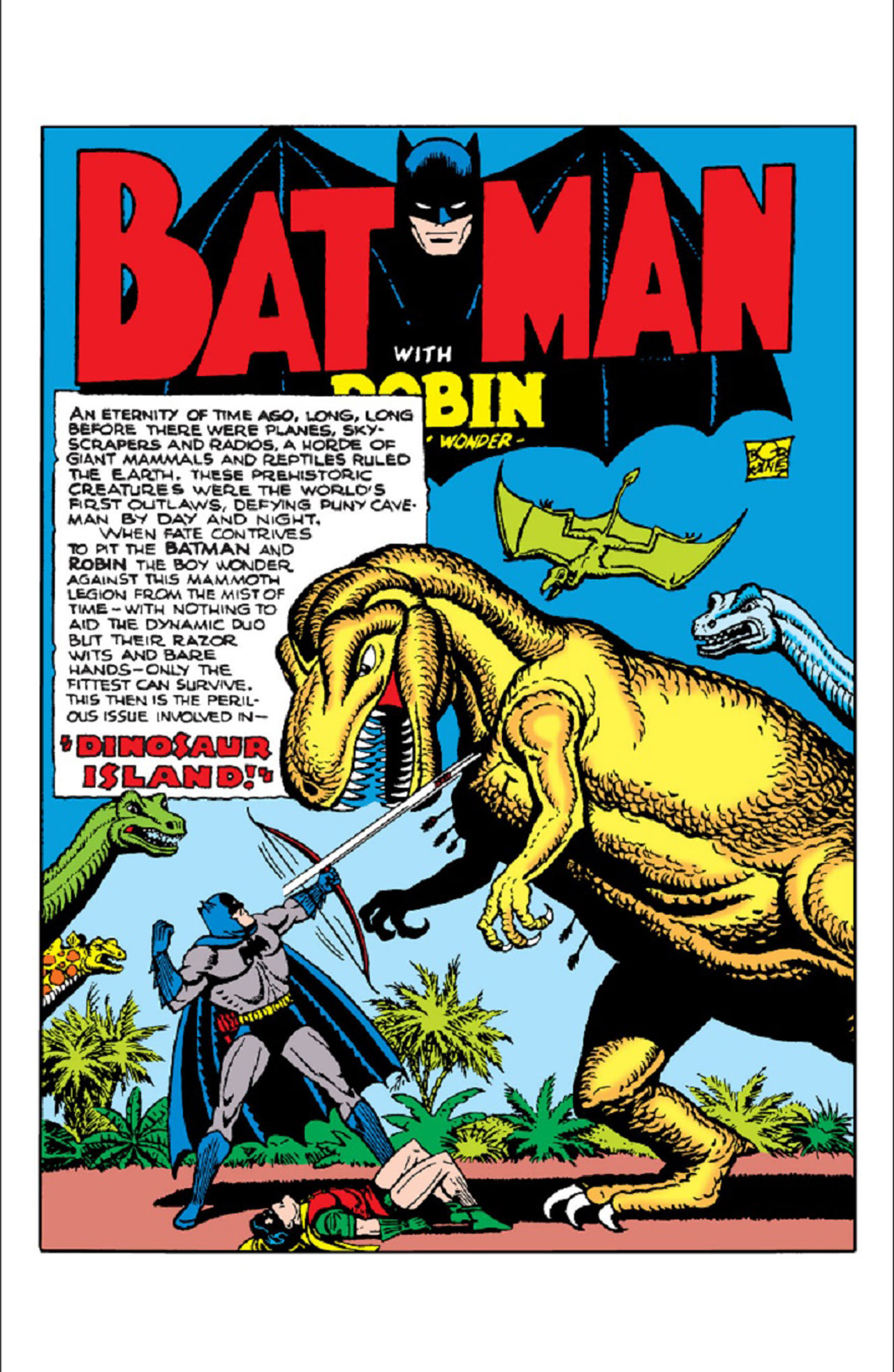 One of the most notable items in the Batcave is a robotic Tyrannosaurus Rex, making us wonder how Batman and Alfred got that thing downstairs. The origin of the robot Dino hails from Batman #35, in which Batman and Robin are chased for sport by a crazed employee of a new amusement park that has recreated the time of the dinosaurs. Some time later, a replica of the T-Rex began appearing in the cave. This has been a mainstay of every Batcave incarnation save for the live-action films, giving director Matt Reeves the perfect opportunity to bring the untold story to the big screen at last.

Wacky Entrances from the Movies 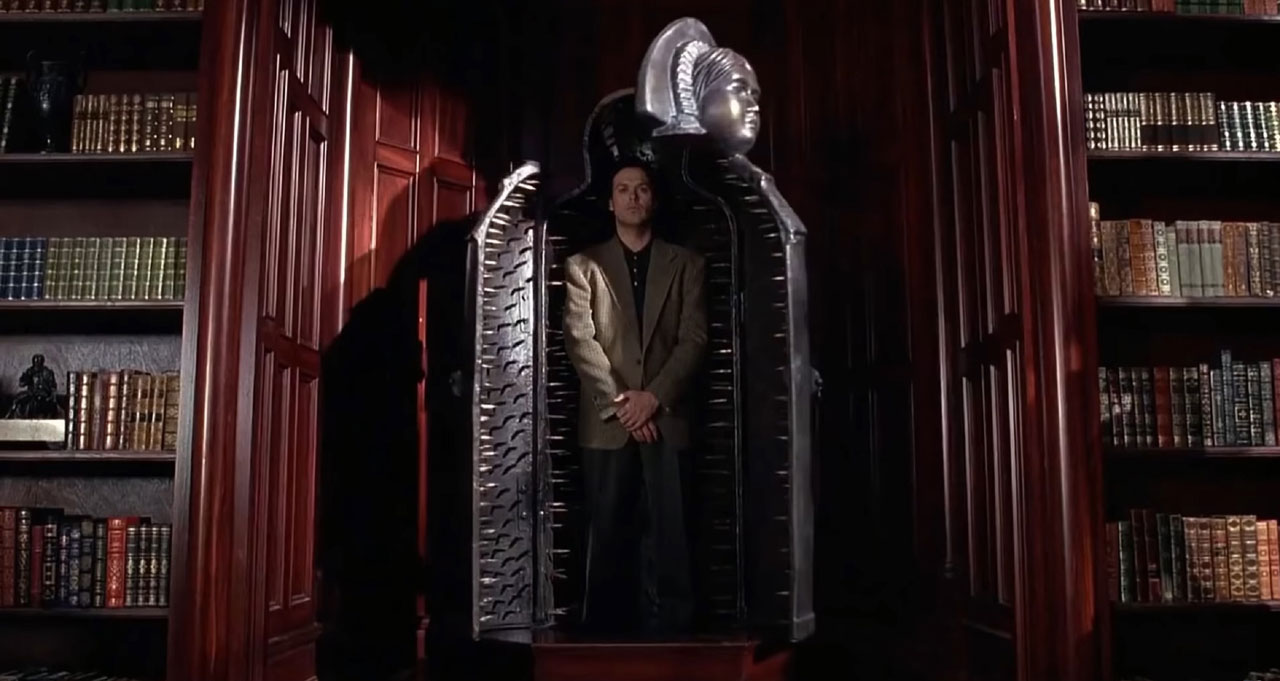 Speaking of the live-action movies, the Batcave changes more times from film-to-film than Batman actors! While the 1989 Batman movie adapted the holographic stone wall in 1986's The Dark Knight Returns, 1992's Batman Returns presented one internal Batcave entrance as an Iron Maiden slide, activated by a switch in a nearby fishbowl in the lobby of Wayne Manor. In the next film, Batman Forever, Val Kilmer's Bruce Wayne had erected an entire transportation system running from his office in Wayne Enterprises across town all the way down into the Batcave. This improbable entrance is made crazier by the fact that the key word to signal the transporter is “chair." What if Bruce schedules a meeting in his office and he offers his guest a chair? 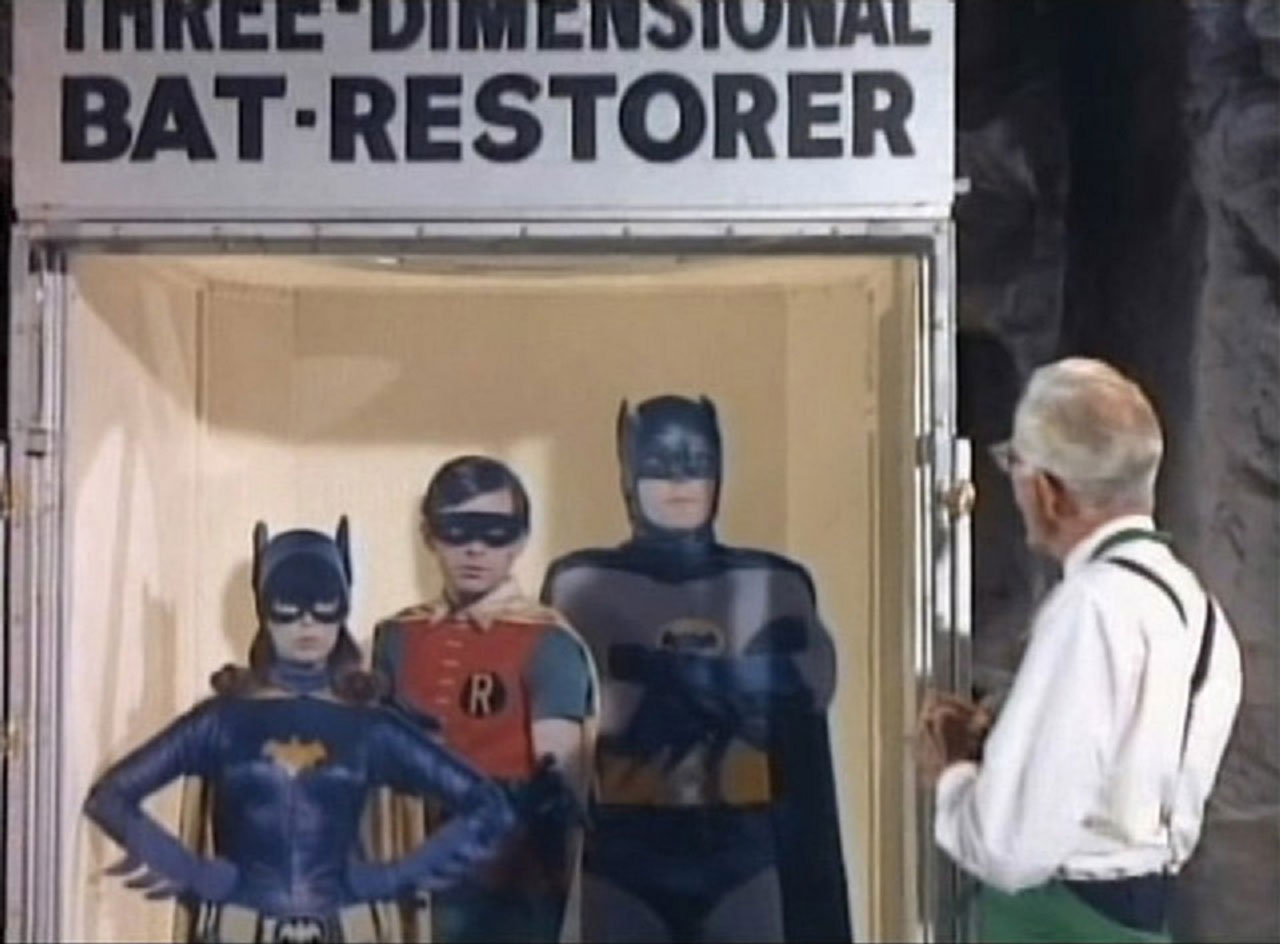 The madness continues as we return to the swinging '60s. In the season 3 episode of the 1966 Batman TV show “The Entrancing Dr. Cassandra," the eponymous villainess shoots Batman, Robin, and Batgirl with what she calls an "Alvino-Ray Gun." This turns the trio into two-dimensional beings, while inexplicably leaving them alive to live out their days as cardboard cutouts. Just as the police are about to give up hope, Alfred is alerted and returns them to the Batcave, restoring their bodies via the Three-Dimensional Bat-Restorer. We can question why Batman had this device in the first place, why he’d ever thought to use such a thing, or how it even works. Ultimately this falls down to the “He’s Batman.”

Whenever Mr. Freeze is in town, Batman makes sure there’s technology to keep himself plenty warm in case he's hit with the Freeze gun. In the Emmy award-winning episode “Heart of Ice," the Dark Knight’s first encounter with the cold-hearted scientist leaves a man nearly frostbitten to death. Batman takes him to the cave and rejuvenates his body temperature with a nuclear-powered full-body jacuzzi. In the episode “Cold Comfort” Alfred is frozen by Freeze. Batman resorts to using similar technology, but ends up dropping his butler in what looks like a traditional jacuzzi. It’s effective, but much less expensive-looking. 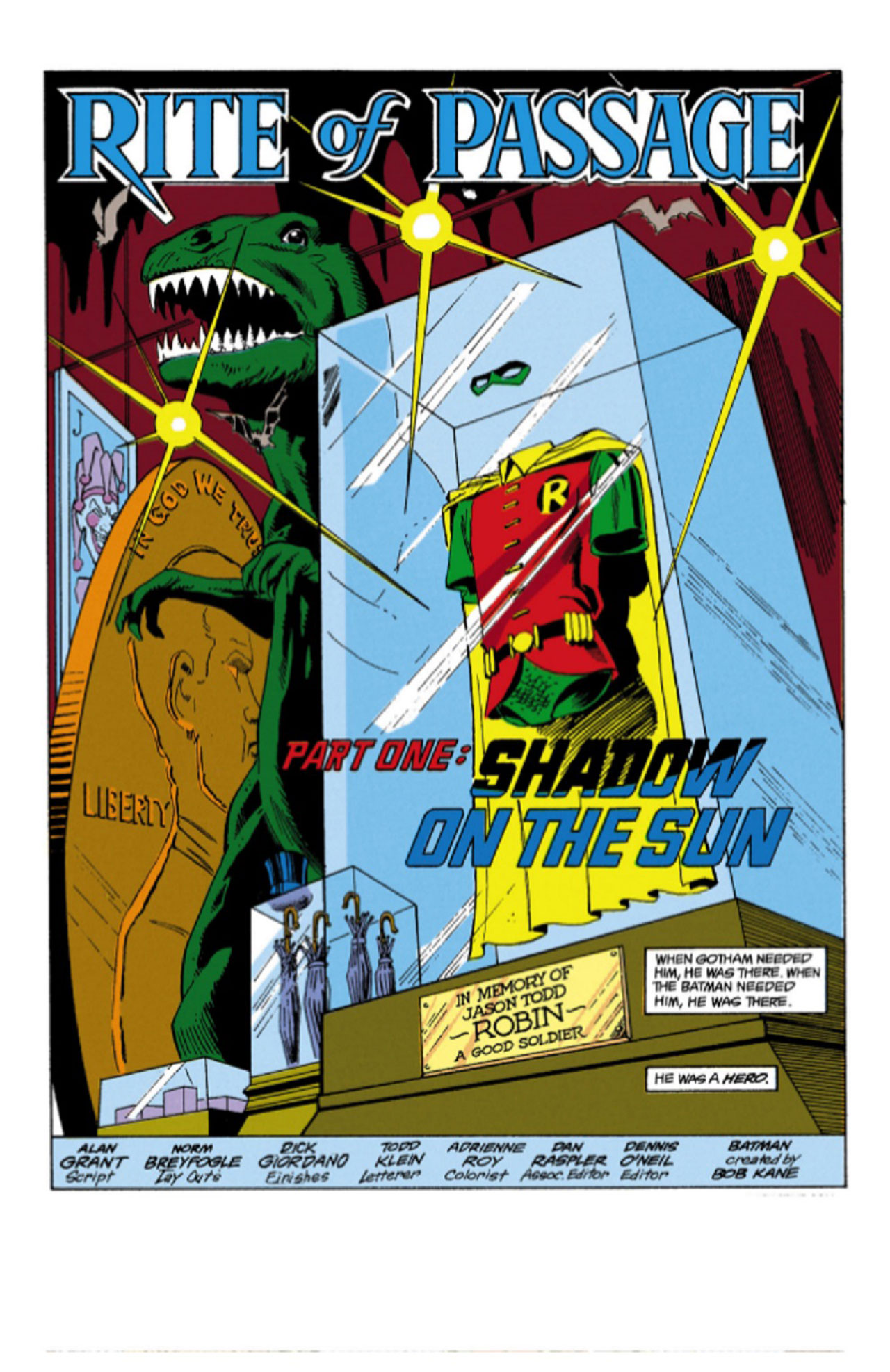 The haunted costume of Jason Todd, formerly the only Robin who died and never came back (formerly on all counts), became a strict indicator of continuity for the Post-Crisis Batman. It reminded everyone, from Nightwing to Tim Drake, of the sacrifices made in fighting crime. But the costume case has an interesting origin, as it first appeared in the alternate-future story The Dark Knight Returns. When that story was published in 1986, Jason was alive and well in the then-current timeline. It wasn’t until Detective Comics #618 after Tim Drake began training to become the third Robin that readers saw the case in the mainstream continuity. Even after Jason returned from the grave as the Red Hood, Batman insisted on keeping the suit on display, as the weight of its image could never be altered. 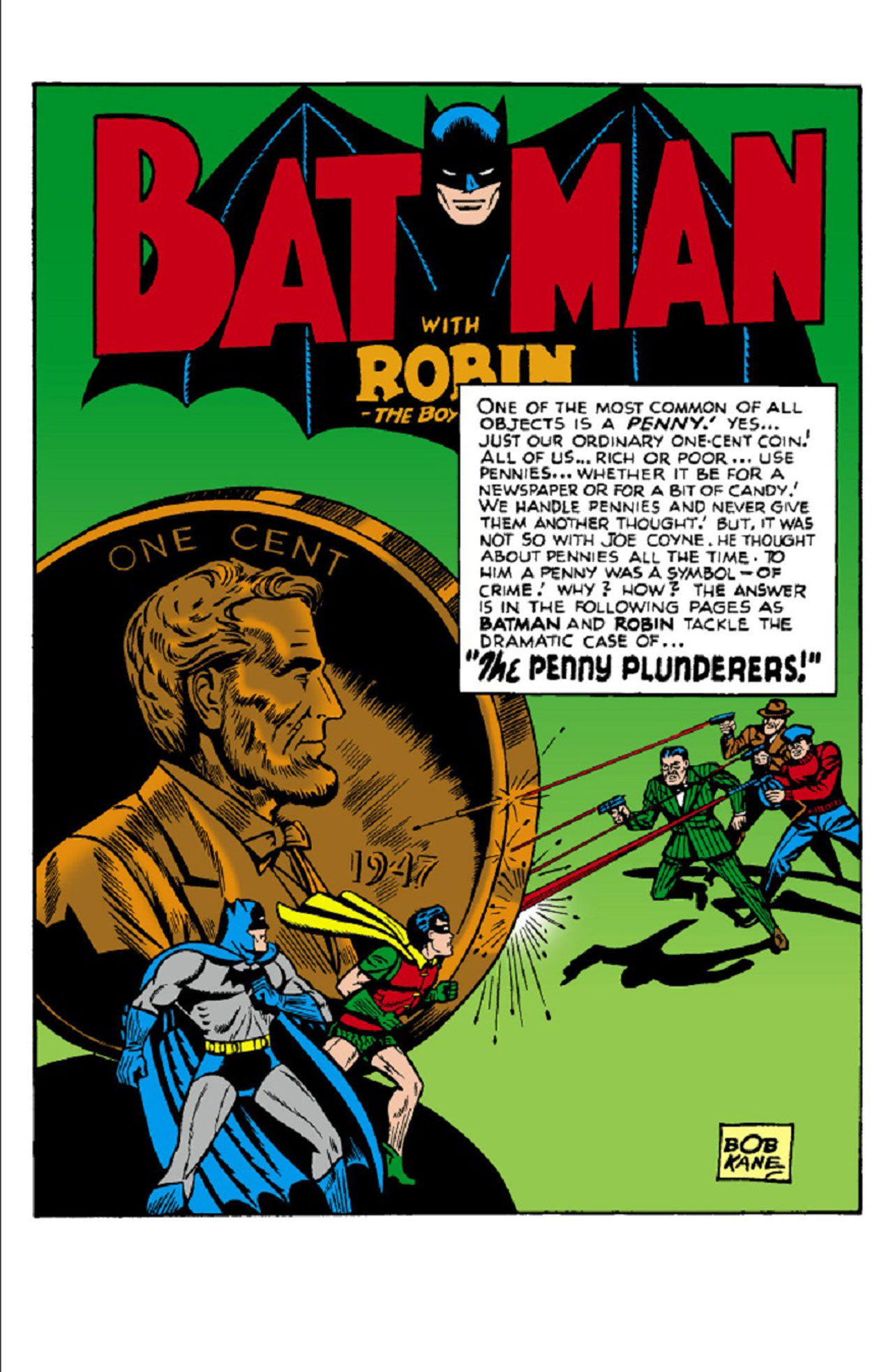 Arguably the most iconic and certainly the biggest item in the Batcave, the giant 1947 penny has been a staple for decades. Often, retellings of its origin depict a Two-Face caper, but the original adventure involved one of Gotham’s kookier criminals, the Penny Plunderer. A crook whose hatred of pennies twisted his mind, Joe Coyne adopted the penny as his symbol and attacked Batman and Robin with a variety of pennies, including the famous giant-sized one. His arrest led to death row, and, save for an appearance in "Two-Face: Year One", he’s never reappeared. But his legacy is secure, enshrined in the home of the man who arrested him.

Do you have a favorite item from the Batcave? Let us know in our Community!