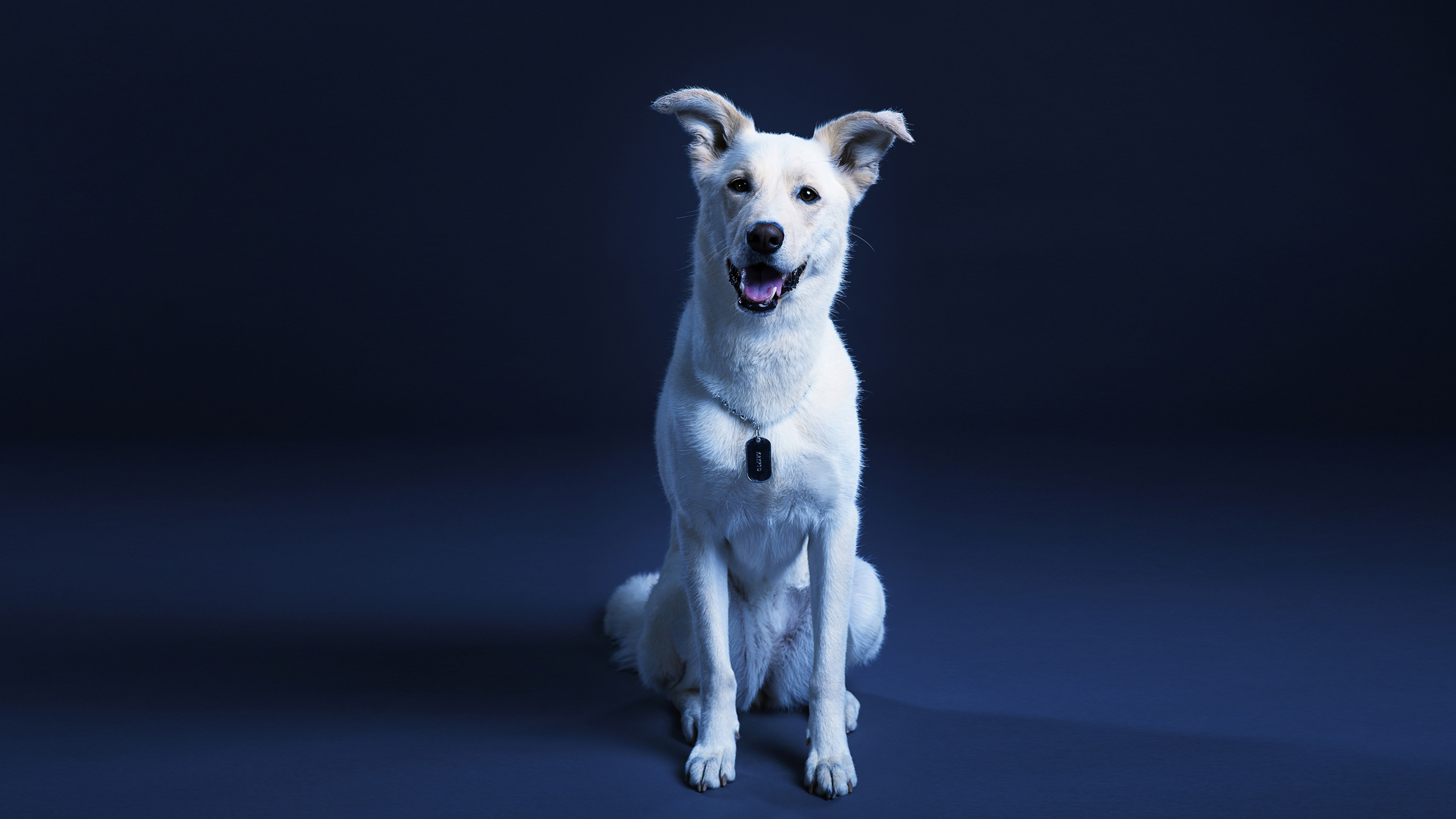 6 Reasons Why Krypto Is the Goodest Boy

Who’s a good boy? Krypto is a good boy! You may have heard rumors that Krypto is a bad dog, but don’t believe them! It’s an indisputable fact that all dogs are inherently good boys. But Superman/Superboy’s superdog takes things to a whole new level. If you’ve seen the latest Titans episode “Conner," then you’re probably looking forward to seeing more of the Dog of Steel. And why wouldn’t you be? After all, he’s probably the goodest boy. If you need further convincing, let’s lay out some of the facts... 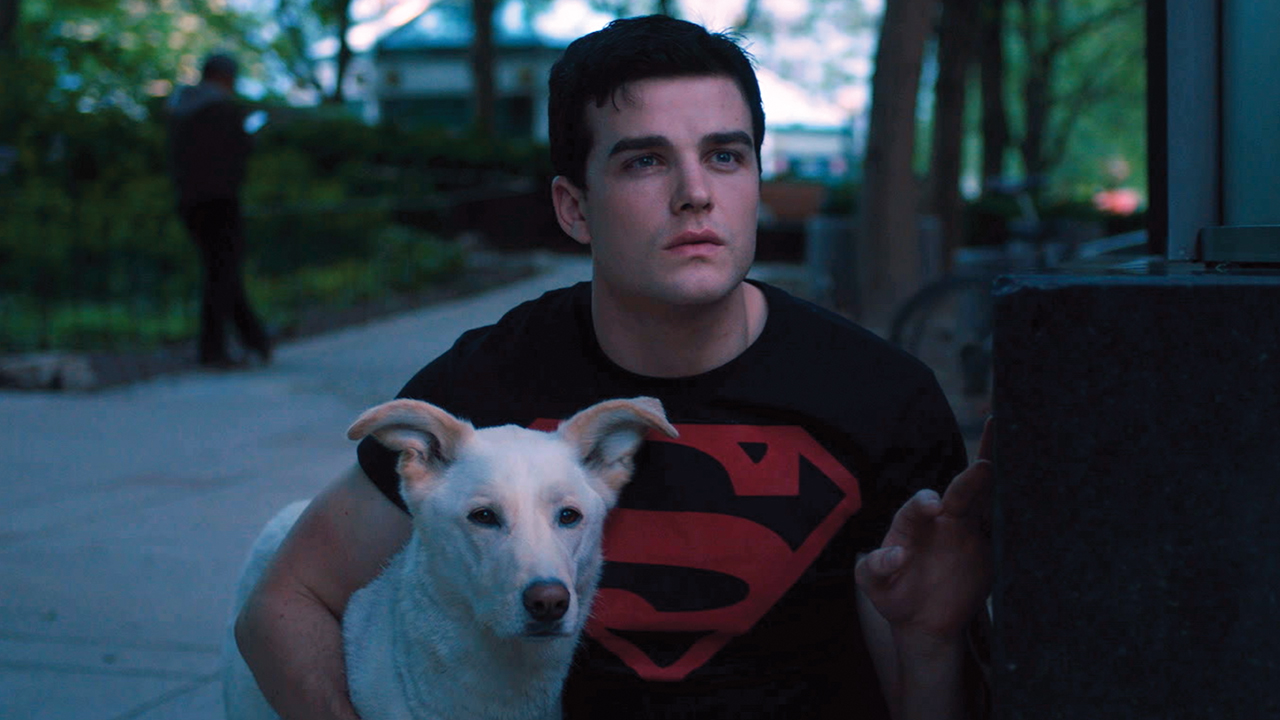 How good of a boy is Krypto? He’s so good that he makes his pals become better people. The “good” is contagious and the most recent episode of Titans is proof positive! Whenever Conner was faced with an injustice, Krypto would bark at his clone companion to encourage him to save the day. In fact, Conner looked at Krypto for affirmation before he saved Jason Todd -- which means that we have the Dog of Steel to thank for the Boy Wonder’s survival. It seems being a good boy is contagious and Krypto is patient zero. Plus, can you name another dog who can intercept a missile like it was a frisbee and lob it back at the bad guy?

He Has a Doggie Secret Identity

The dog pictured above is named Skippy. You might think that he looks like Krypto, but as you can see Skippy has a big brown spot and everyone knows that Krypto has no spots... Like his super owners, Krypto has at various times needed a secret identity. After all, Clark Kent can’t be seen around Smallville with Superman’s dog, as it would raise too many questions. To solve this problem Krypto used shoe polish to give himself a fake spot, which he would use his x-ray vision to burn off when it was time for action. Clever pup! During the Bronze Age of comics, Krypto had another secret identity as a movie stunt dog named Jocko, and he even had his own doggie girlfriend, from whom he had to hide his superheroic secret identity. 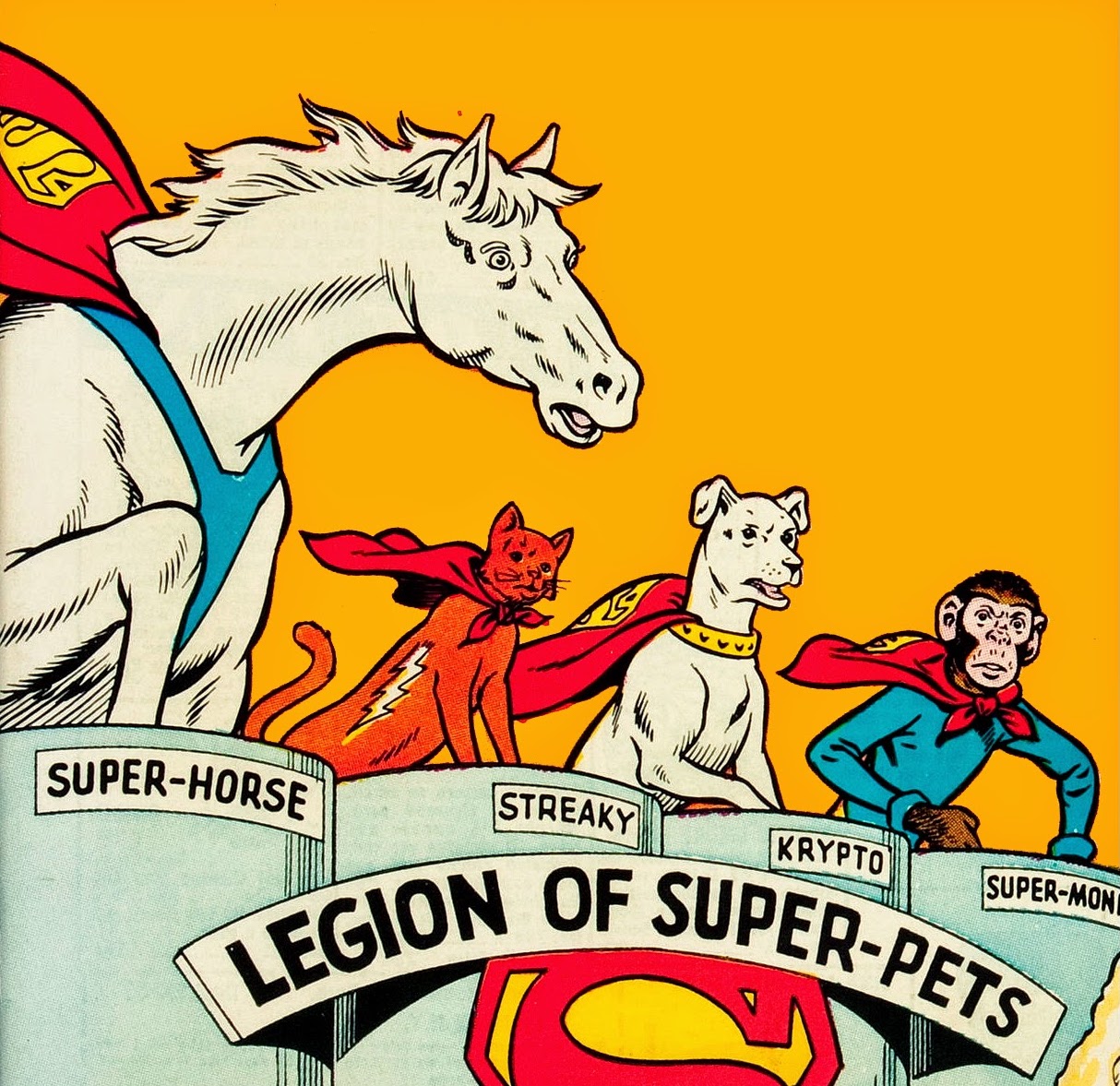 Krypto is such a good boy he has the honor of being a member of two separate super teams! In Adventure Comics #293 (written by Jerry Siegel and penciled by Curt Swan) a group of alien invaders known as the Brain-Globes used their mind-controlling powers to turn the Legion of Super-Heroes against Superboy. Luckily their mind control powers don’t work against animals, which just proves nobody can force Krypto to be a bad dog. Krypto led Comet the Super-Horse, Beppo the Super-Monkey and Streaky the Super-Cat against the villainous group and saved the day. The Legion was so impressed with how much of a good boy Krypto was, they officially dubbed the group the Legion of Super-Pets.

While one awesome group of pets would be enough for an ordinary dog, Krypto is a SUPER dog. So the Space Canine Patrol Agents knew they had to have him on their roster! Introduced in Superboy #131 (written by Otto Binder and penciled by George Papp), the SCPA were a group of intergalactic dogs who helped maintain peace throughout the stars -- barring all the space mailmen they must have chased.

He Narrates His Own Comics 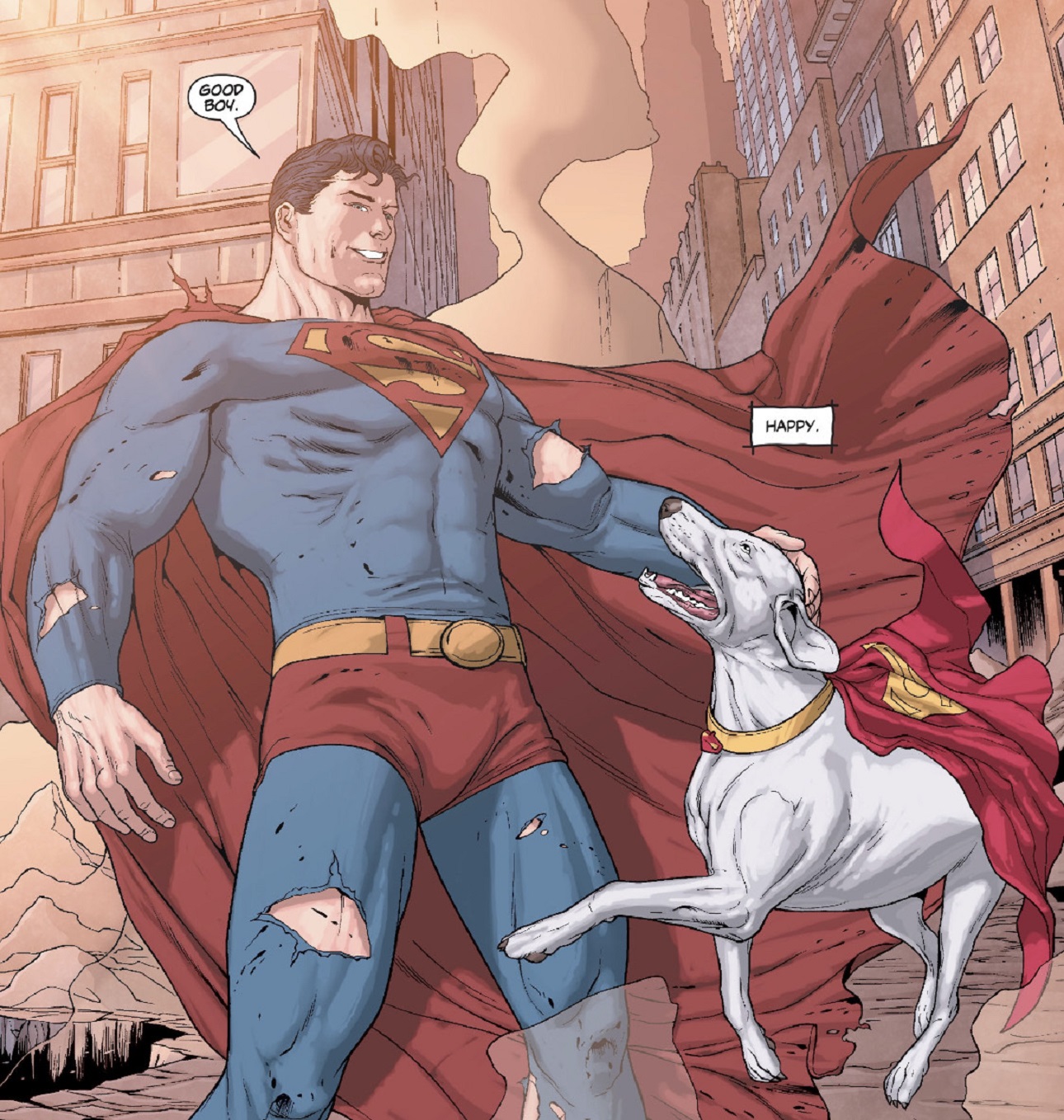 Bad dogs don’t get to narrate their own comics, and okay dogs are given the occasional thought balloon. But if you’re a good dog you can narrate your story -- in English. Krypto was given his own narration boxes in many Silver Age stories, as well as in the more recent Superman #680 (written by James Robinson and penciled by Renato Guedes) as he was defending Metropolis from the villain Atlas. Now, how many comics has Ace the Bat-Hound been allowed to narrate? Go ahead, we’ll wait... The rest of Superman #680 is a testament to how awesome Krypto is. He helps Superman defeat Atlas. He’s cheered on by Metropolis. And Lois decides to forgive him for the time he messed up their apartment.

He Wandered the Country Solving Mysteries 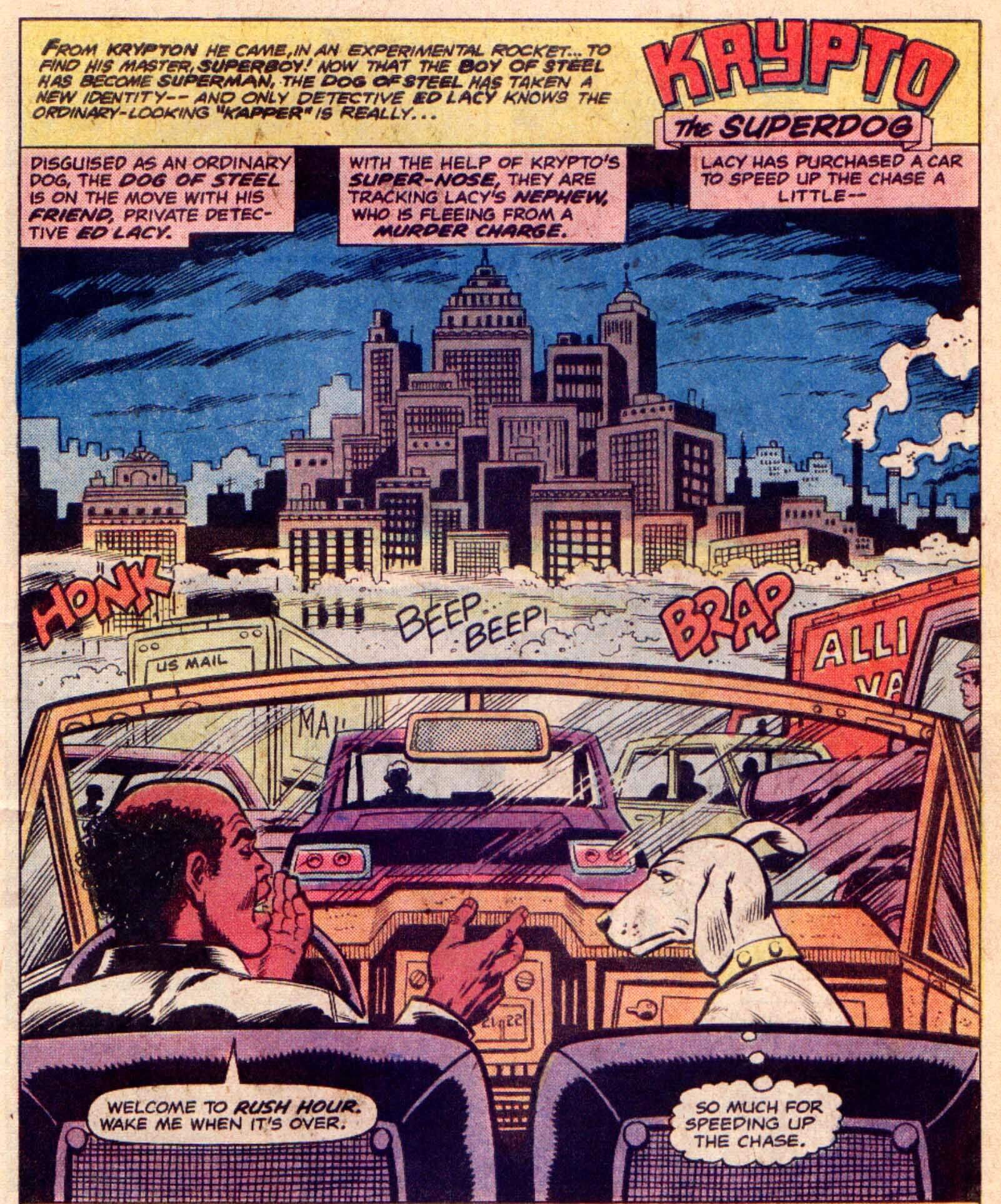 In the Bronze Age of comics, Krypto was given his own backup feature in the Superman Family title (starting with issue 182). Here, Krypto teamed up with a private detective named Ed Lacy, and together they wandered the country, solving mysteries, battling mobsters, and clearing innocent people convicted of murder. The stories and conflicts were a lot more street level than the threats Krypto faced with the Space Canine Patrol Agents, proving that Krypto can work in any genre he’s placed in. Another reason Krypto is a good boy!

He Makes a Convincing Human 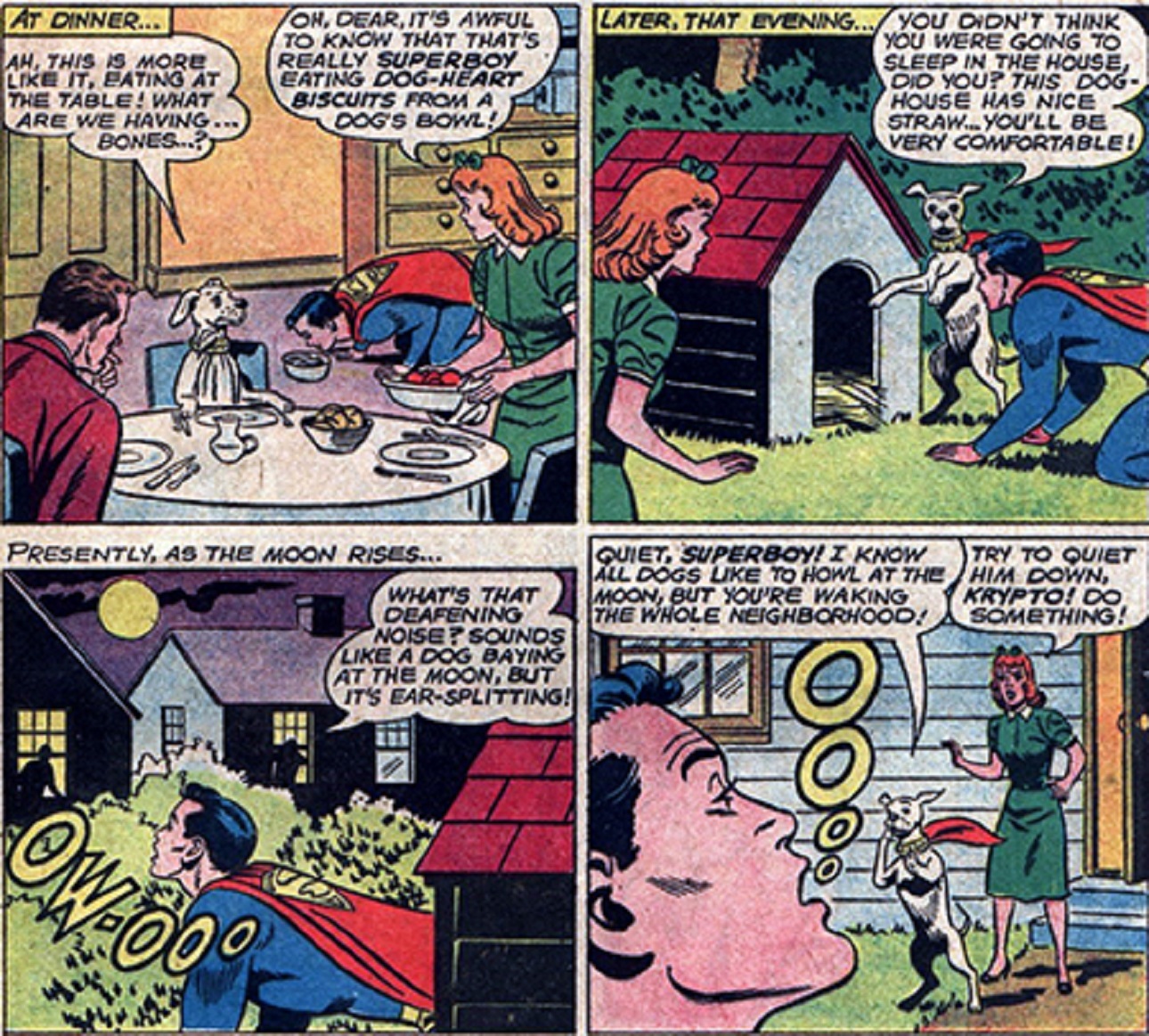 When we tell you that Krypto is a good boy, that’s not just a figure of speech! In Adventure Comics #310 (written by George Kashdan and penciled by George Papp) Superboy and Krypto swapped roles, and the canine demonstrated just how convincing of a human he could be. Superboy ate dog food from a bowl, slept in a doghouse, and barked into the night; while Krypto spoke eloquently and dined like a fine gentleman. Since it’s a Silver Age story, there was a twist at the end, but we won’t spoil that for you here...

Did you know Krypto had his own animated series? Check out the tie-in comic Krypto the Superdog for some fun canine adventures!

And that’s not the only animated feature Krypto starred in... The Super-Pets we mentioned? Check out their hilarious cartoon adventures in the DC Nation Shorts: DC Super Pets.