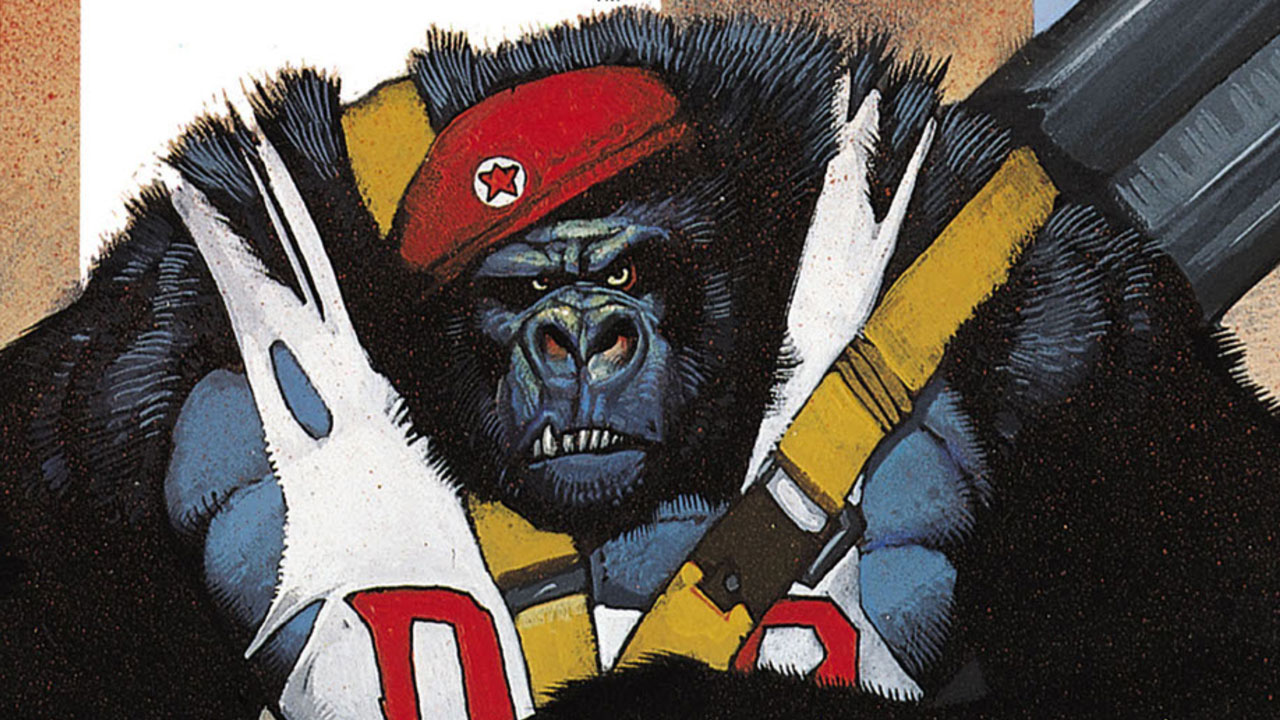 They say a hero is only as good as the enemy they battle, and vice versa. We here at DC Universe say the enemies the Doom Patrol battle -- many of whom have been featured on DC Universe's hit Doom Patrol TV series -- are just as stange as they are! Over the years, the team has faced down villains so weird they’d be turned away from Arkham Asylum -- from soulless scissor-people to apes in love with disembodied human brains. Here are five of the team's freakiest enemies…

Can you imagine a sight more frightening than an army of men with giant scissors for hands spouting a bunch of nonsense? The Scissormen come from Orqwith, an imaginary world that was willed into existence. Since their world of origin doesn’t follow the rules of reality, the Scissormen’s abilities defy the normal laws of physics. They can multiply in infinite numbers and use their scissored claws to send helpless citizens to their home world. Their faces have no features, and their language is an incoherent mess of words. While battling these freaky foes, the Doom Patrol discovered the Scissormen would turn to cloth if they were hit hard enough. They were eventually defeated when the Doom Patrol exploited a contradiction in the world of Orgwith, causing it to cease existing. You can see the Doom Patrol go up against the Scissormen in 1989's Doom Patrol #19, the first issue of the series written by Grant Morrison and penciled by Richard Case.

Beware the Beard Hunter and his never-ending quest to rid the world of all facial hair! Ernest has a hormone issue preventing him from growing a beard, so he struck out against society by becoming the Beard Hunter -- who, true to his name, kills people with beards! After slaying his hairy victims, Ernest uses a razor to collect their beards as trophies. The Bearded Gentlemen’s Club of Metropolis hired Ernest to bring them the beard of Niles Caulder, and Ernest hoped to use the money to publish an adult graphic novel called “1001 Top Shaving Tips for Boys”. You can read all about the Beard Hunter’s strange mission in 1991's Doom Patrol #45 (written by Grant Morrison and penciled by Vince Giarrano).

Monsieur Mallah and the Brain

Before Pinky and the Brain there was Monsieur Mallah and the Brain. More than just two of the strangest Doom Patrol villains, they’re also one of the DC Universe’s oddest love stories. The Brain was a brilliant scientist who lost the use of his body after an explosion caused by Niles Caulder. Monsieur Mallah, a gorilla the Brain had genetically experimented on until he gained intelligence, saved his creator by placing his brain in a machine. The two of them have been members of various incarnations of the Brotherhood of Evil. Despite belonging to different species (and one of them not having a body), the duo eventually fell in love. You can read their first appearance in 1964's Doom Patrol #86 (written by Arnold Drake and Howard Purcell, penciled by Bruno Premiani and Howard Purcell). Yes, Doom Patrol is the only comic series in which a disembodied brain can find love with a genetically-enhanced gorilla.

Some of the Doom Patrol’s villains have outrageous goals, but the only thing the Cult of the Unwritten Book wants to do is read their favorite book. The only problem is the book is tattooed on a reluctant man, and reading it will cause the end of the universe! The Cult hopes to use the knowledge from the book to summon a powerful entity known as the Decreator, which manifests itself as a giant eyeball in the sky. The Cult is led by two puppets, who hold two smaller puppets while sitting on a throne -- and they’re able to open portals through wounds on people’s palms. If there are weirder ways to travel between dimensions, well, we can't think of any... You can read about the Cult in 1990's Doom Patrol #31 (written by Grant Morrison and penciled by Richard Case), or watch the episode of DC Universe's Doom Patrol -- "Cult Patrol" -- in which the Cult makes its screen debut!

To tell the story of Doodle-Bug, it’s important to begin with Casey Brinke. Casey was a comic-book character created by Doom Patrol member Danny the Street, published with the Danny Comics branding. (Hmmm, those initials look familiar...) Danny brought Casey to life and didn't tell her she was a comic character. The evil organization Vectra tortured Danny until he brought more characters to life, including an evil version of Casey who became known as Doodle-Bug. Doodle-Bug had none of Casey’s humanity, which she proved by killing her own mother. Doodle-Bug has the power to drive through the space-time continuum, which led to an odd car chase with her and Casey. Check out the Doodle-Bug’s story in Doom Patrol: Brick by Brick, written by Gerard Way.

Of course no list of weird Doom Patrol villains would be complete without the ever-popular Mr. Nobody and Animal-Vegetable-Mineral Man. And you can watch them come to life in the Doom Patrol pilot episode and episode 3, "Puppet Patrol".

Which Doom Patrol villain do think is the strangest? Let us know in our Community!