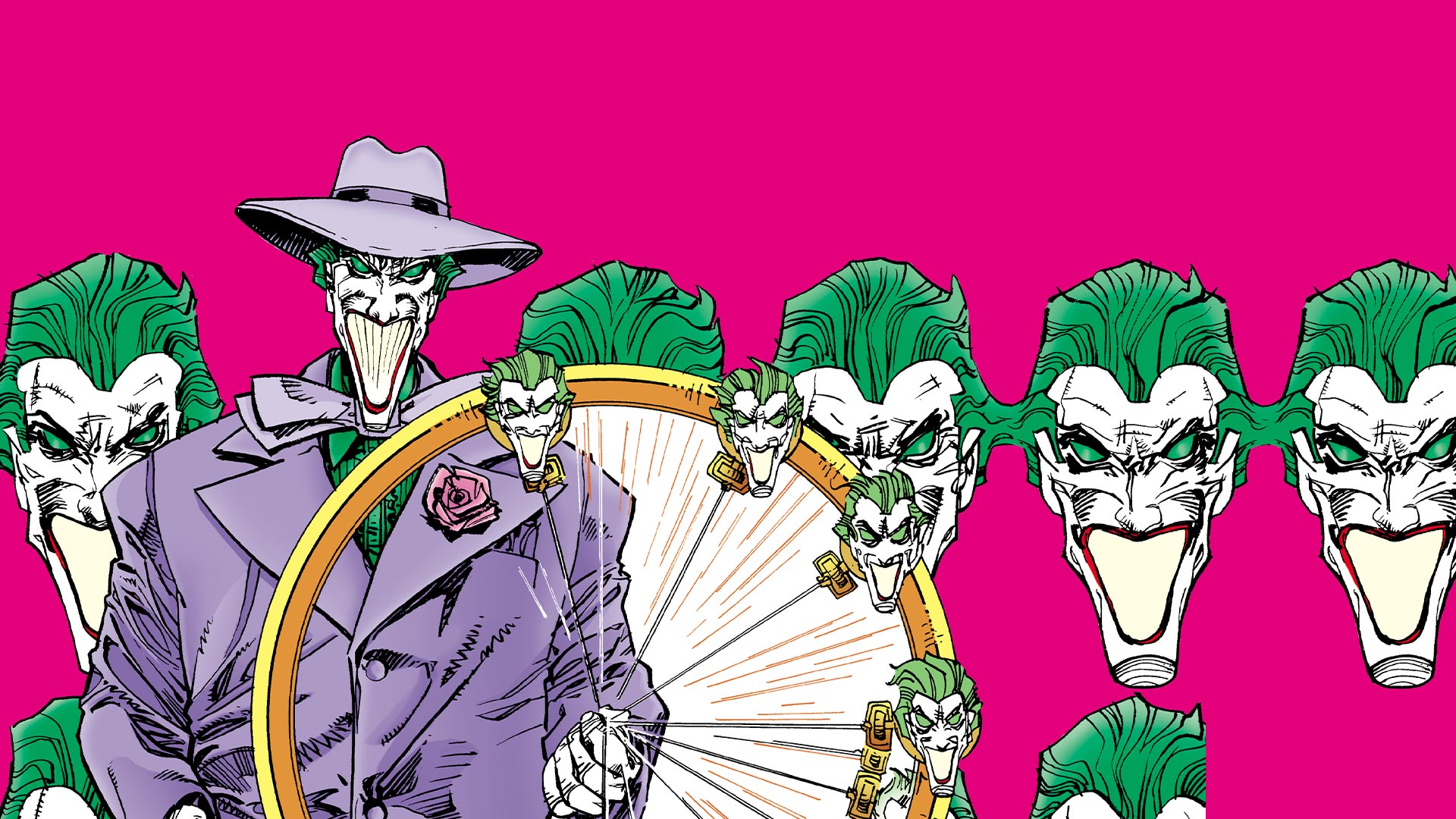 It's the Joker's 80th anniversary, and he has innumerable classic stories to celebrate. The Killing Joke, Death in the Family, The Laughing Fish, and others are always in the conversation about best Batman tales, and some of the greatest comic stories of all time. But with eighty years of history, there are a few stories that have been underrated. Here are five Joker tales that are overlooked in the character’s canon. 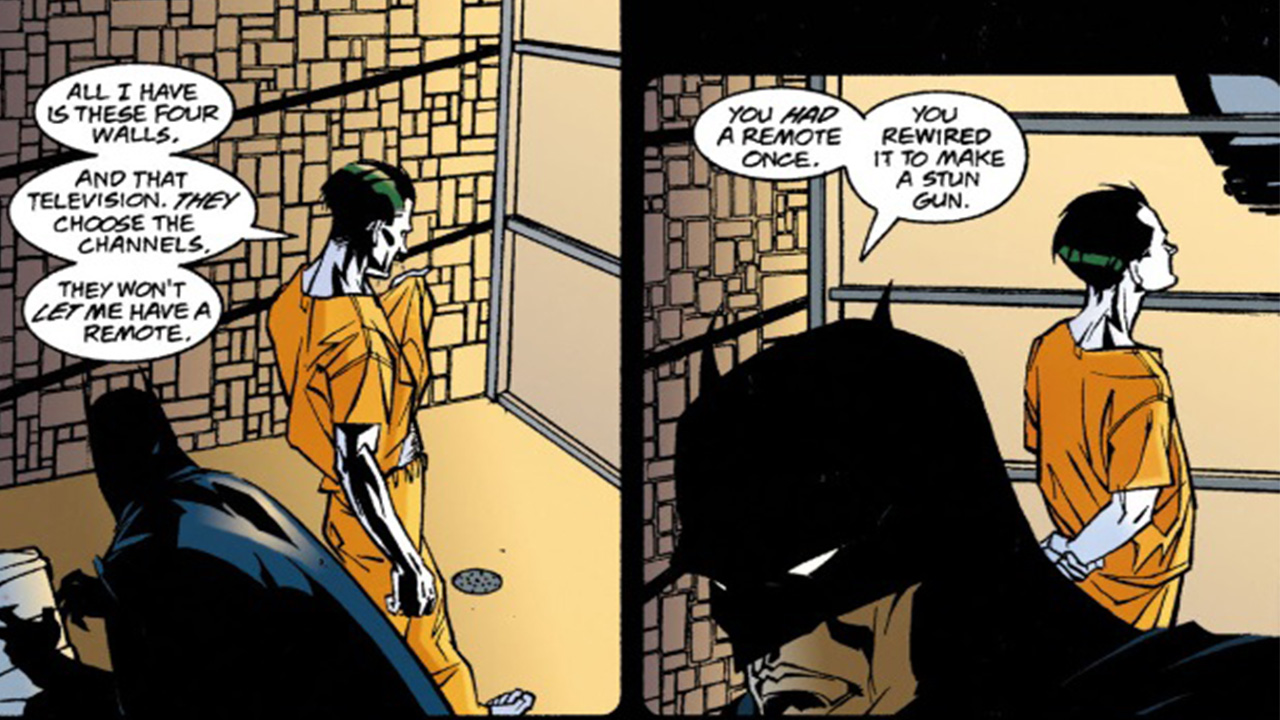 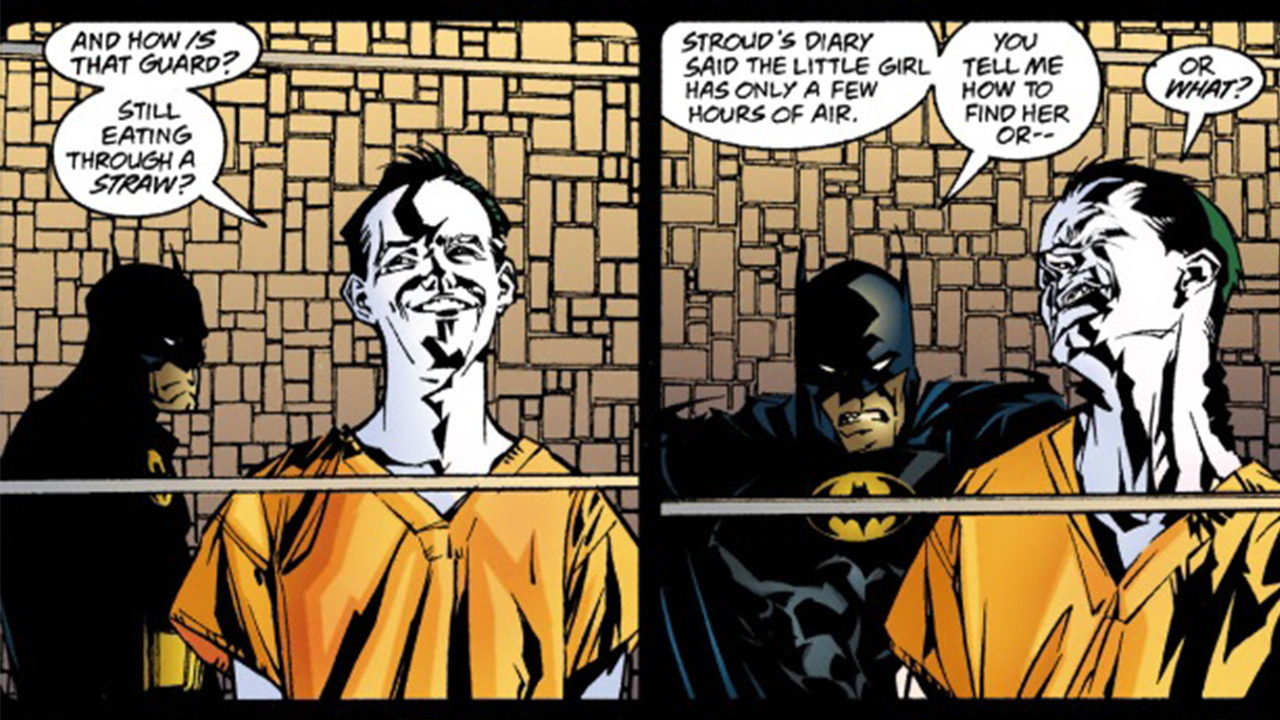 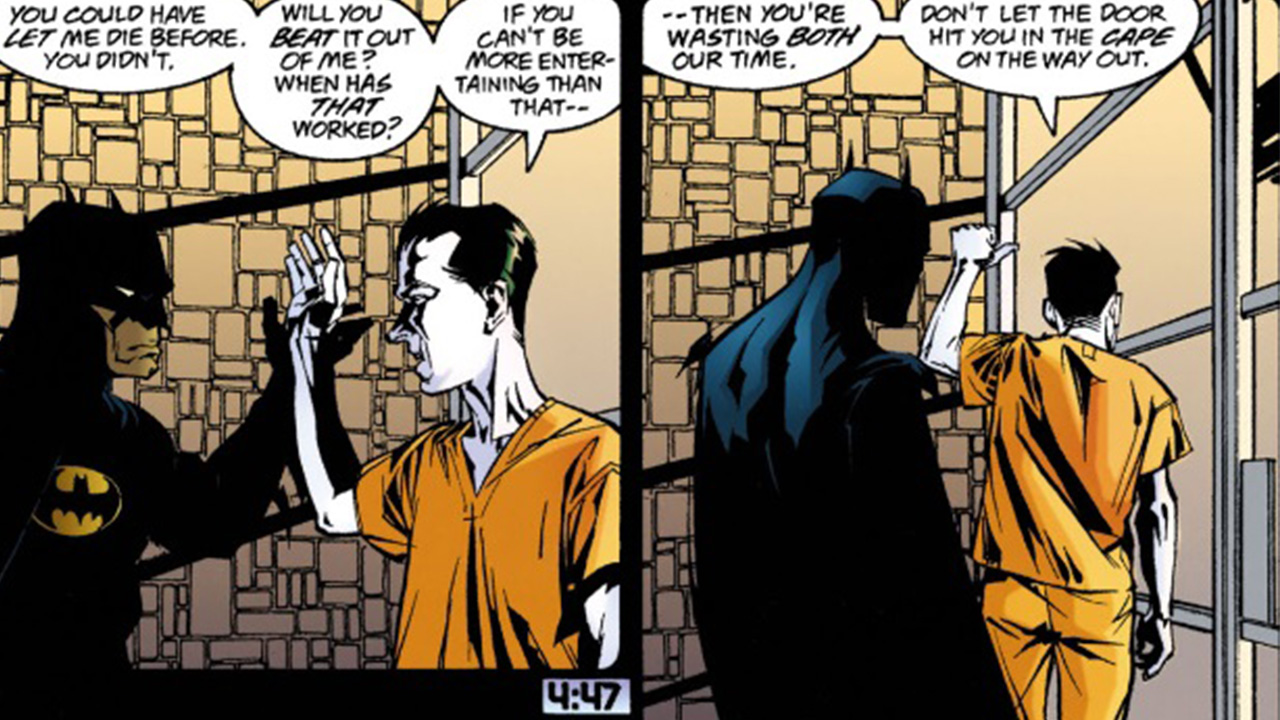 In this issue, Batman is forced to interrogate the Joker on the whereabouts of a kidnapped child after her kidnapper committed suicide. The story is intercut between scenes of past and present: the present sees Batman battle a ferry full of gangsters to get to the girl while the past depicts the back and forth between the Dark Knight and the Clown Prince in a battle of wits. We learn that the kidnapper had a cell in Arkham Asylum next to the Joker, and that the two planned the crime before he hung himself. Batman realized the likelihood of the Joker’s involvement in the crime as it was the anniversary of the day he killed Jason Todd. It’s a tense, moody story with slick artwork, and is a must-read for fans of The Dark Knight film who enjoyed the interrogation sequence with Batman and the Joker -- sharing the same battle of wills that's a staple of their relationship.

Ever wondered what happened between Batman and the Joker after the events of Death in the Family?

Nobody stays dead in superhero comics, least of all the Joker. The Ace of Knaves has cheated death a dozen times over, and when Batman chased him into a helicopter and he was shot before the chopper crashed, both he and readers doubted they’d seen the last of him. But a lot had changed since the Joker last terrorized Gotham City. By this time, Bruce Wayne was in the process of training Tim Drake to be the next Robin. But in Detective Comics #616, Batman deduces the Joker had survived the crash, and immediately sends Tim on a class trip at his boarding school out of the country. Regretting that he’d be bringing in another youngster in his war on crime, Batman begins doubting his moral judgement, afraid that he’ll kill the Joker for what he’d done to Jason Todd and the Gordons. The Commissioner is also anxious over the return of the Joker, after the events of The Killing Joke. His kidnapping and torture, as well as the crippling of his daughter Barbara, has left him swelling with anger, and he too worries he’ll cross the line when he next confronts the murderous clown.

But it’s not just Batman and Gordon who were left reeling from their past encounters, as Joker himself is traumatized by getting shot in the chest and nearly dying in the chopper crash. He can’t even return to crime after a copycat starts a killing spree imitating the Joker’s M.O. Losing both his confidence and his ability to “see the joke," Joker struggles to get back into crime, searching for the confidence to risk his life for the sake of insanity once more. It’s a stunning look at one of comic’s most evil characters, rendered more humanly than usual by writer Marv Wolfman and illustrators Jim Aparo and Mike DeCarlo.

LEGENDS OF THE DARK KNIGHT #142-#145: Joker Enters the Lazarus Pit and Becomes Sane 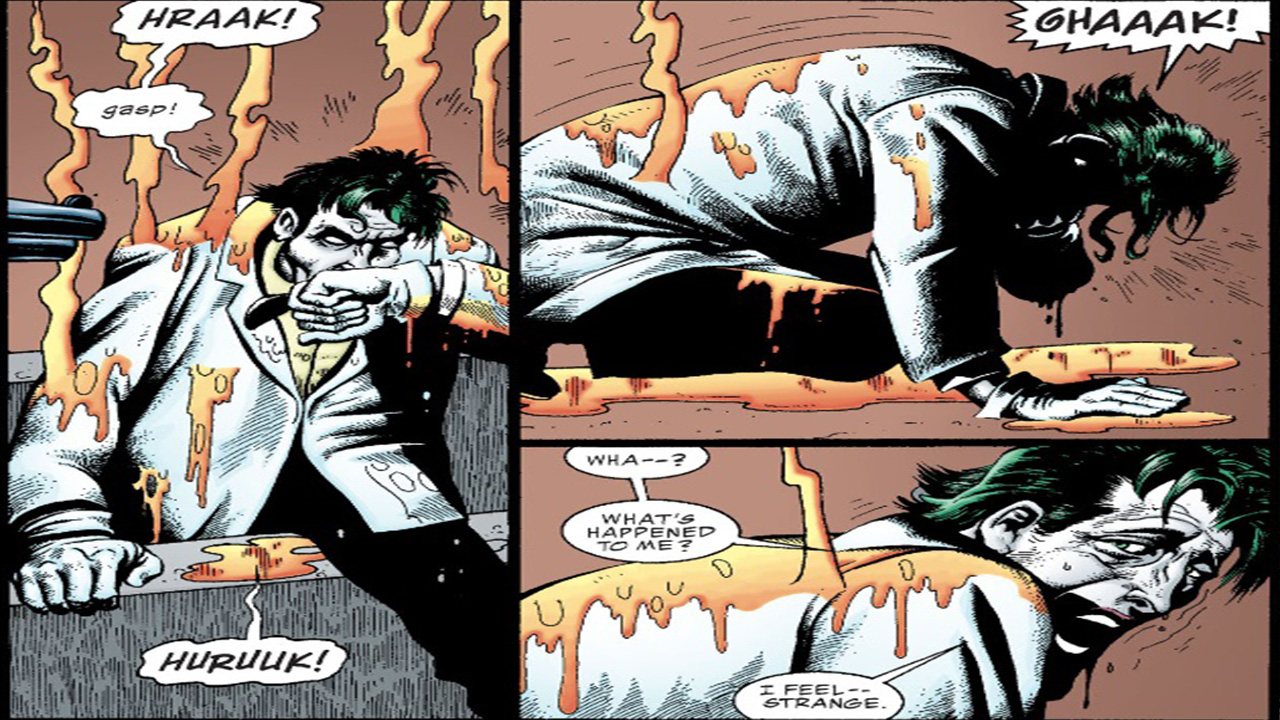 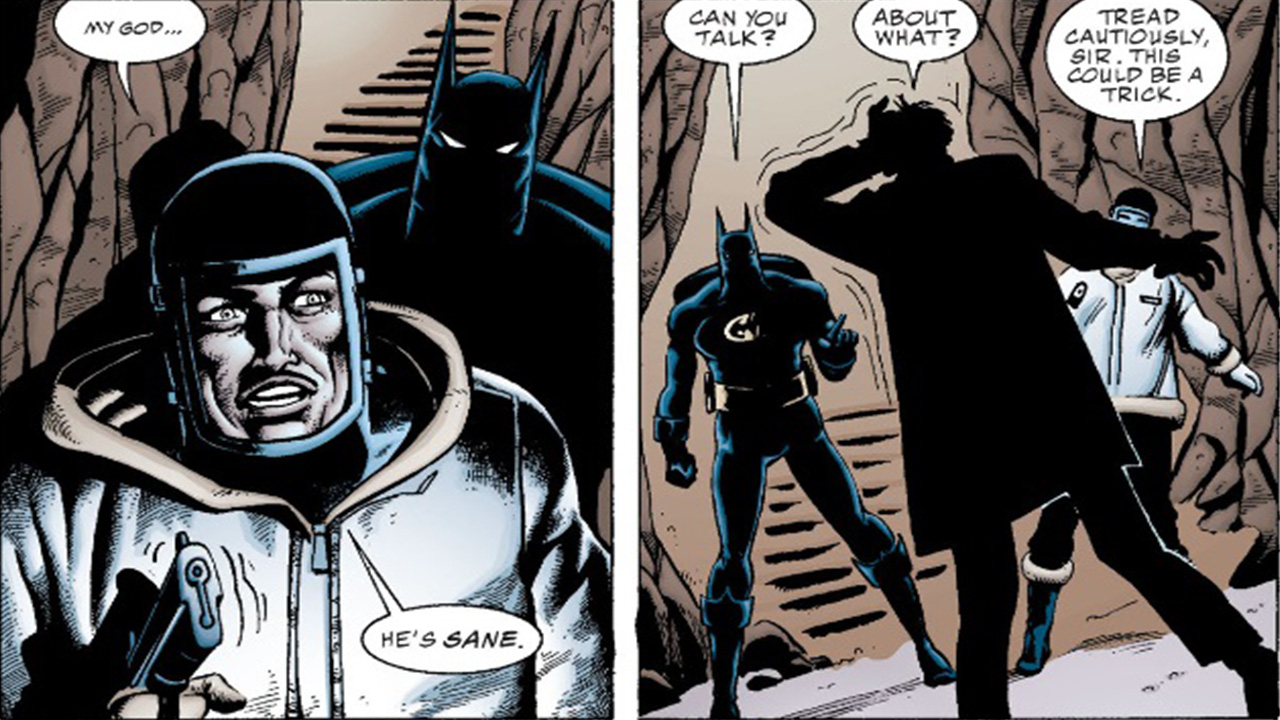 In a four-part story titled “The Demon Laughs,” Joker is kidnapped from Arkham, and taken to the other end of the planet to meet Ra’s al Ghul. Ra’s hopes to enlist Joker’s brilliant criminal mind to concoct another doomsday virus in order to reduce the world’s population by 95%, so that the survivors can restart the globe under his dominance. Together, they steal a bio-weapon from a warring Middle Eastern country and create the virus, but after a failed attempt to betray his liberators, Joker is shot by Talia and left for dead. Batman and Alfred arrive just as he’s dying outside of a room containing the Lazarus Pit, Ra’s ancient pool of mystical waters that heals all ailments but registers the recipient with a temporary bout of insanity. With no other option to find Ra’s, Batman submerges the Joker and saves his life, but in doing so, the Clown Prince revives, clear-headed and completely sane. He gives Batman Ra’s location and expresses remorse over all the crimes he’s committed. But by the time Ra’s is defeated, Joker returns to his maniacal self. 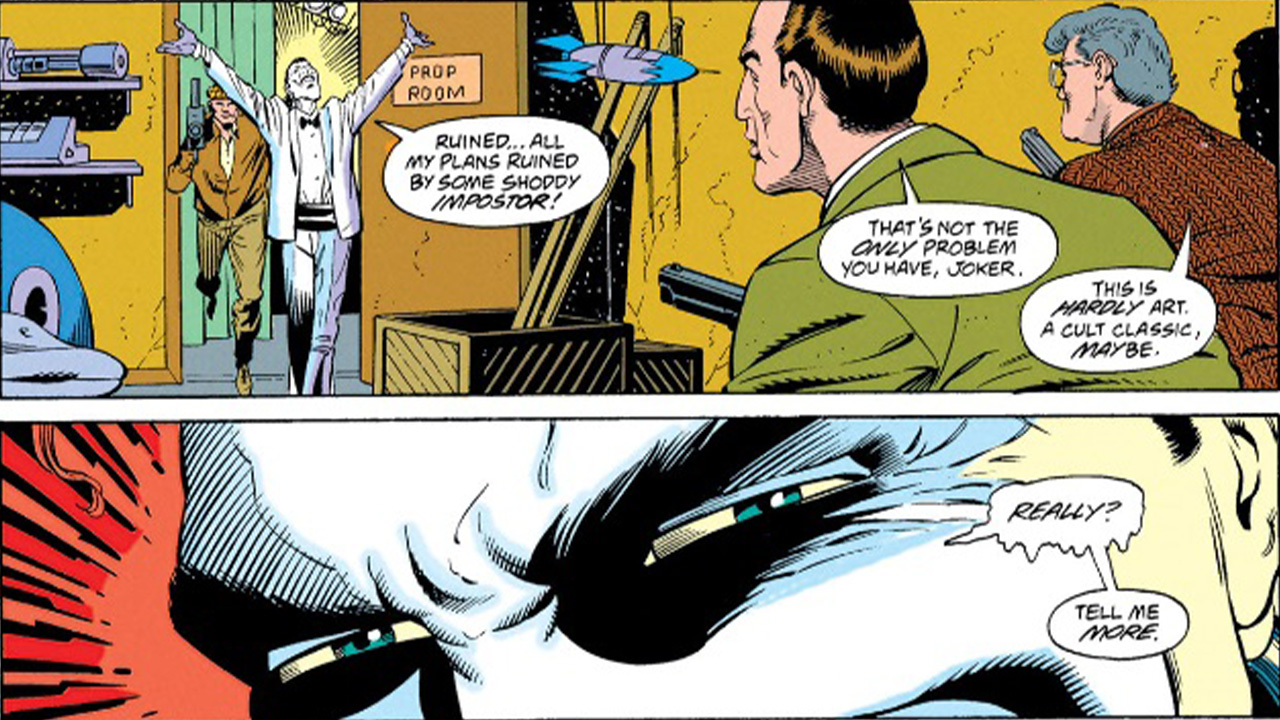 The Joker has always seen himself as an artist, and in 1993 he took this to the mainstream when he kidnapped a movie producer and began producing his magnum opus: “The Death of Batman” -- a film soon to hit Gotham theaters. Decked out with a '90s ponytail and flanked by a crew of wannabe movie extras and a Siskel & Ebert duo of henchmen, the Joker meticulously plots out a story in which Batman is killed ignominiously in what is meant to be both a tragedy and a triumph for the Harlequin of Hate. Unfortunately for him, the Batman in question was not Bruce Wayne but Jean-Paul Valley, a.k.a. Azrael, who was operating as Batman during the events of "Knightfall." Brainwashed by the System which programmed him to eliminate evil without mercy or prejudice, Jean-Paul dispatches Joker with a brutality that left the Joker with several broken bones; and would have been worse had the GCPD not arrived in time to save him.

Gotham’s villains have never had any love for Robin, the Boy Wonder, and for a egomaniac like Joker whose eyes have always only been for Batman, well, he detests the teen hero the most. (Jason Todd can attest to that.) In Robin #85, we sit in on a therapy session with the Joker talking about why Robin really gets under his skin. Amusingly, it’s the illogic of a dark hero like Batman running around with a brightly-colored sidekick that bothered him about the first Robin. He admits to liking the second more, but resolved to kill him since his dark side better complimented Batman’s, which the Joker sees as his job. But when the third Robin showed up, deducing his plot by himself and spoiling his plans, that’s when the Joker figured out there had to have been more than one, meaning that there could be more than one Batman, which really drove him nuts. It’s a fun, twisted issue that shows the thought process behind the Joker’s madness, and explores his relationship with the other half of the Dynamic Duo.

What's your favorite Joker tale? Talk about it in our Community!