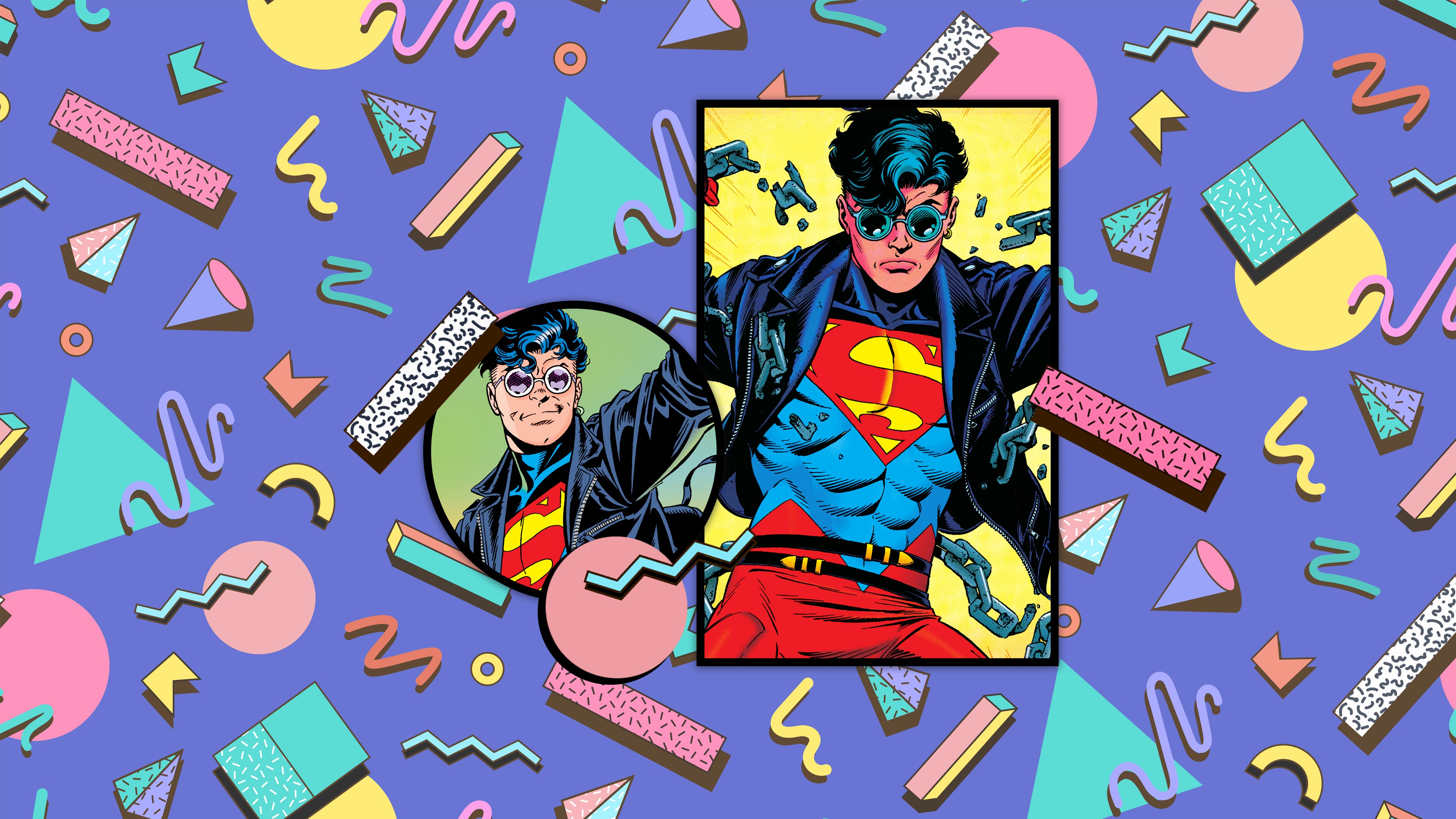 How many listicles have you seen proclaiming “Only '90s Kids Will Remember This”? Some might see those and think they’re the ultimate '90s kid. But put down your tamagotchis and listen up, because Superboy truly WAS the quintessential 90’s kid – accept no substitutes. The Teen of Steel might be busting heads on DC Universe’s Titans right now, but in the 1990s he was ruling the comics world. So grab a can of Surge, take off your Walkman, and check out these 5 times Superboy owned the last decade of the 20th century!

The Style! The Attitude! 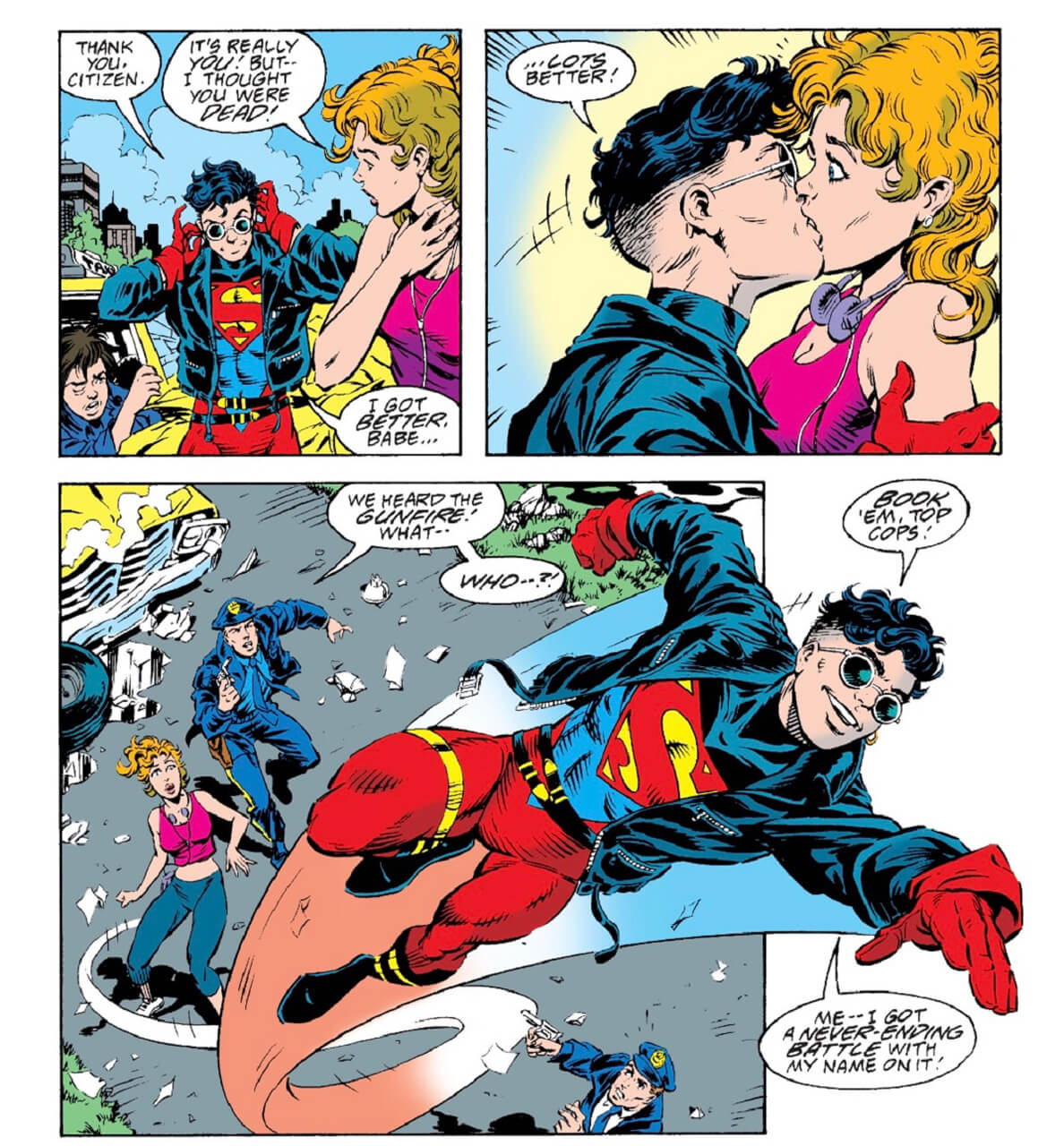 Check out the Cadmus Kid’s original look! One of the reasons Superboy is the ultimate 90’s kid is because he practically wore the decade! Those shades would help Superboy fit in with the high schoolers from Beverly Hills 90210, while his fade is reminiscent of all those guys from the classic Tommy Hilfiger magazine ads. And can we talk about the stylish leather jacket? We pretty much have to, otherwise we’ll be forced to address all the different belts wrapped around the costume. Look, it was the 1990s. Everyone was just following whatever fashion trends were fly at the time.

Did Someone Say Super-Nintendo Party?! 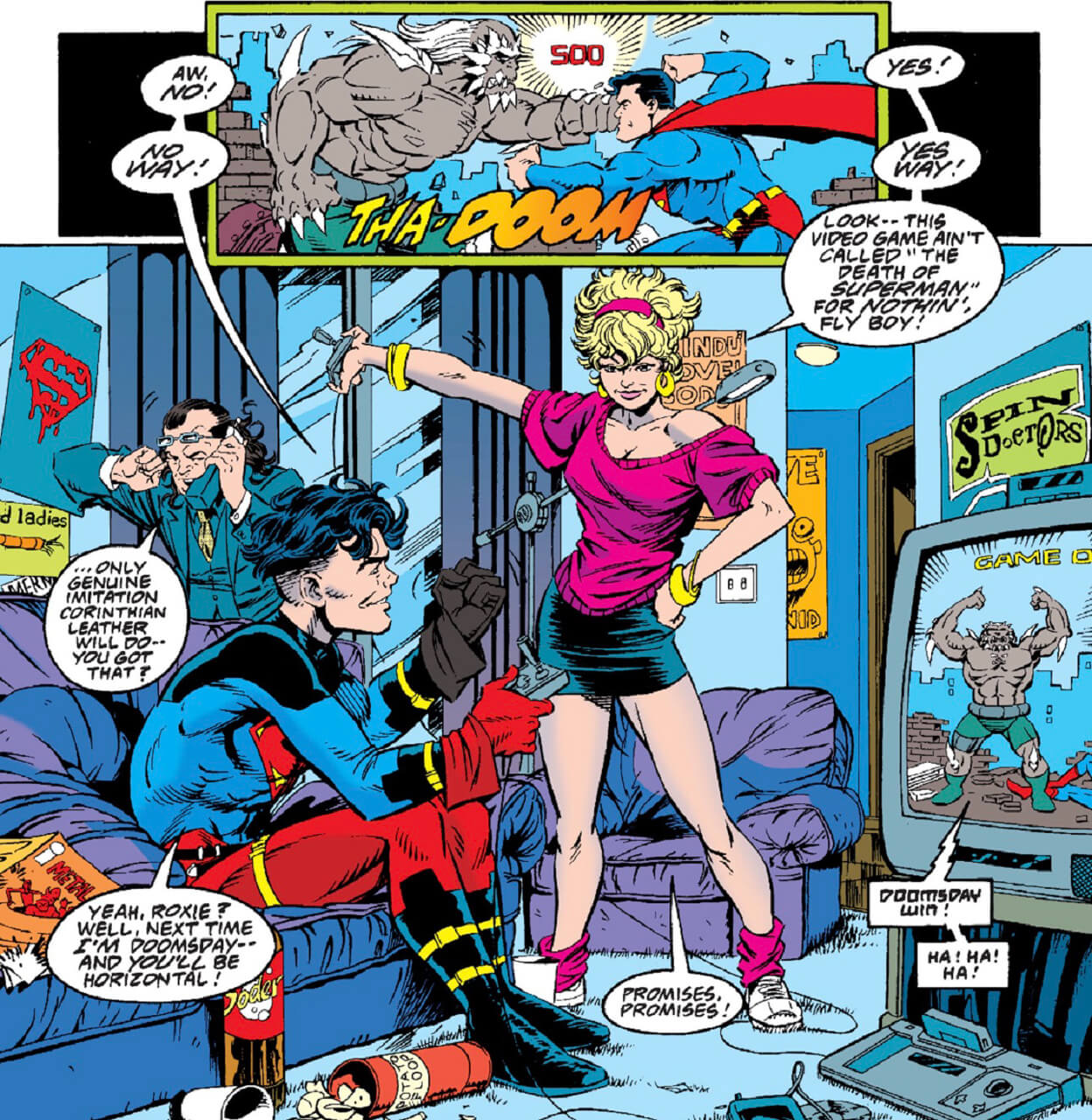 Picture this: It’s 1993, the weekend has just started, and your friends have come over for an epic night. What do you break out? Super-Nintendo! If you grew up in the '90s, check out the above image from Adventures of Superman #503 (written by Karl Kessel and penciled by Tom Grummett)  and tell us it doesn’t look familiar. As if! The pringles all over the floor, the comic books sprawled across the couch, the soda can and the Super-Nintendo... All that’s missing is some VHS cassettes from Blockbuster. Hey, Superboy knew how to party. Here’s the 411, the Death of Superman video game he’s playing is actually real. If any of you kept your old consoles, be sure to fire up this baby for some nostalgic fun. 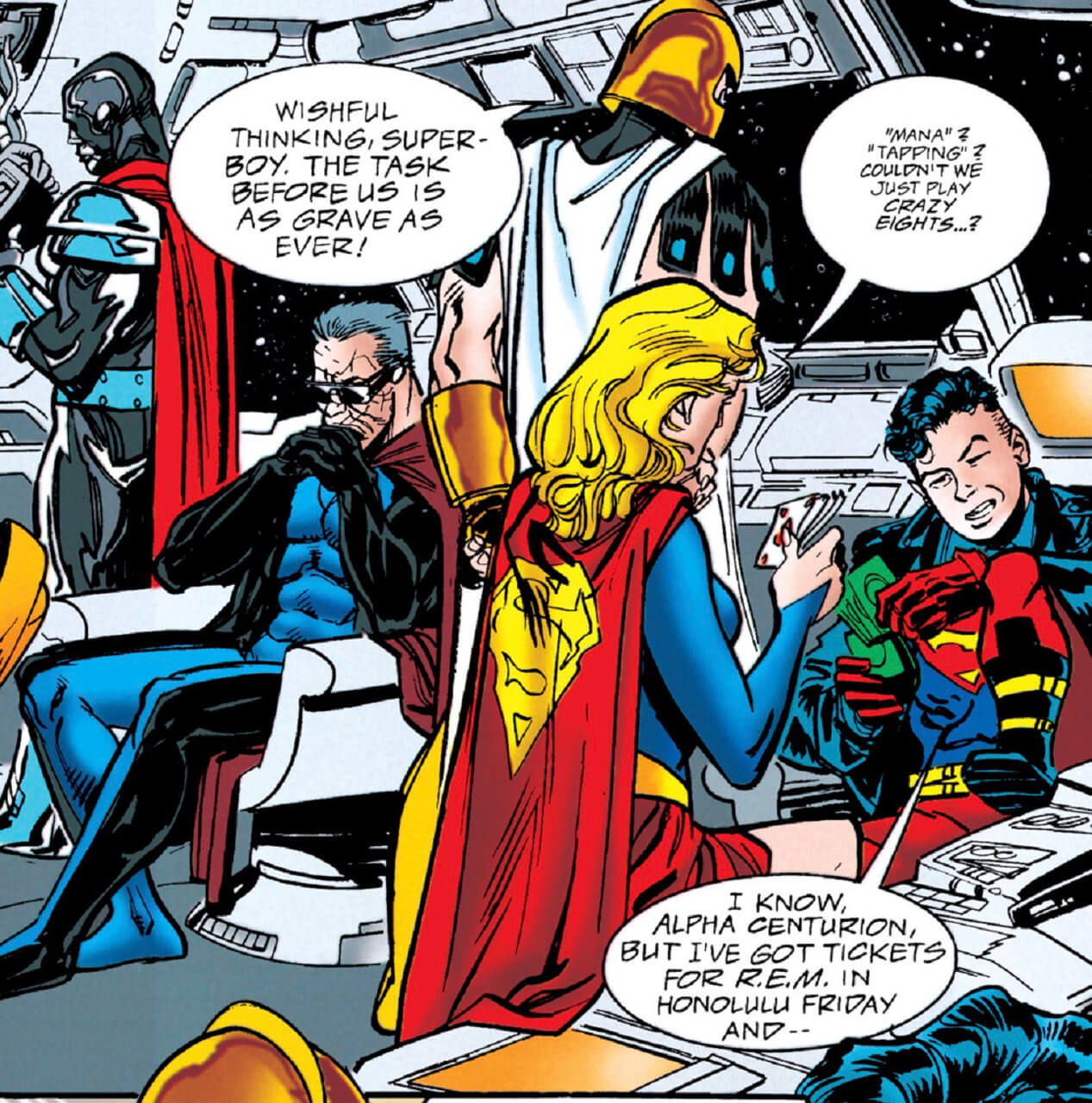 Some stories are timeless. some stories are full of a bunch of dated references -- and we love both! While other teen heroes like Robin spent most of their time studying and trying to improve their mind, the Teen of Steel was plugged into pop culture and wouldn’t let you forget it. Superboy conducted an interview in Team Superman Secret Files and Origins in which he invited fans to e-mail him at Superboy@Aol.com. When was the last time you saw someone use an AOL e-mail address? It was an address is so old he was able to just put “Superboy” in it, as opposed to Superboy78211. The interview also contained references to the Spice Girls. Seriously, the kid couldn’t open his mouth without dropping a '90s pop culture reference. In Action Comics #716 (written by David Michelinie and penciled by Kieron Dwyer), Superboy was disappointed about missing an R.E.M. concert. In the “Reign of the Supermen” storyline, he compares cloning to being a xerox. If you ever want to feel old, ask somebody under the age of 20 if they know what a xerox is. Then prepare to cry. 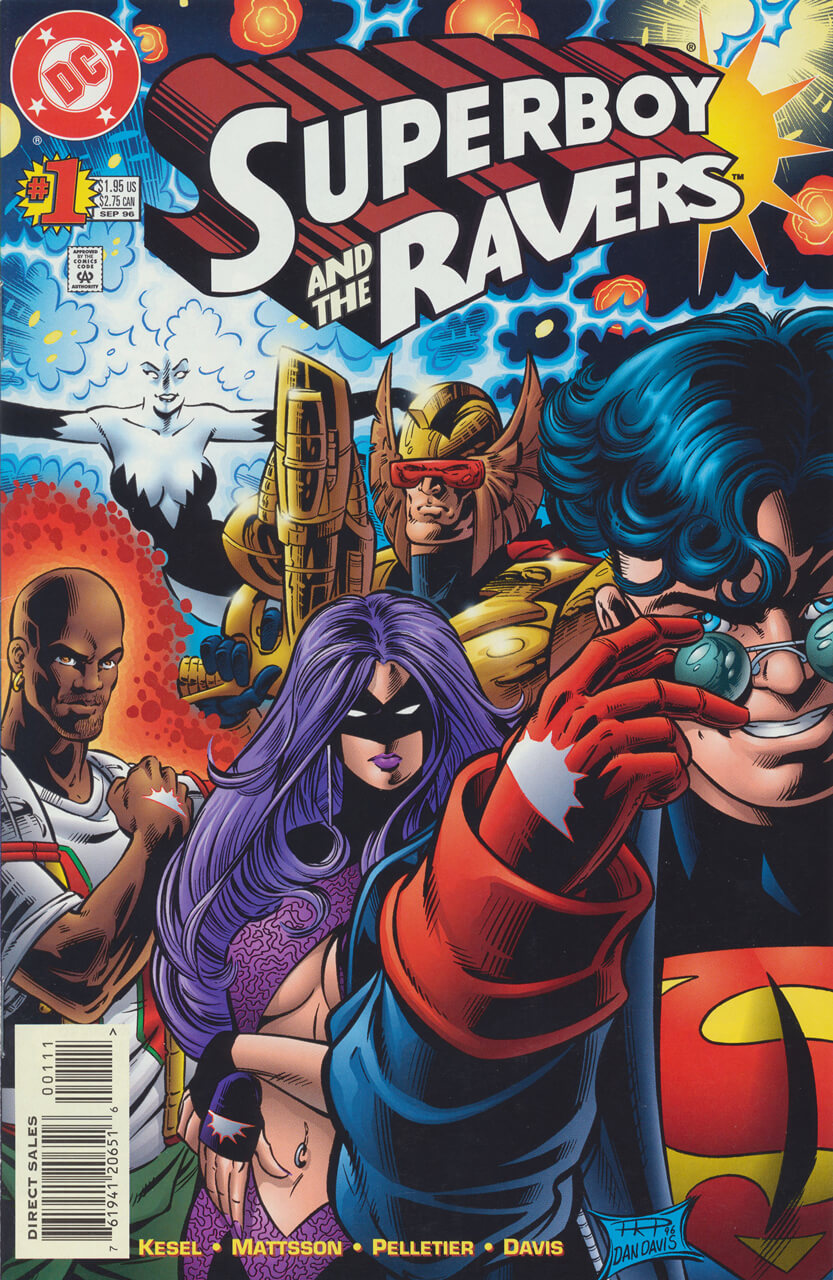 Sorry, Superboy, but we weren’t about to forget these guys. Before the Teen Titans, and before Young Justice, Superboy ran with a team of partying heroes called the Ravers. It’s actually hard to think of a more '90s name for a superhero team than the Ravers. But It gets better. The reason they were called the Ravers is because they were part of their own intergalactic never-ending party. The team had their own series where they ran across other groups, like the Fashion Police. Yes, the Fashion Police was totally a thing. It’s like they knew we’d be writing this article one day... 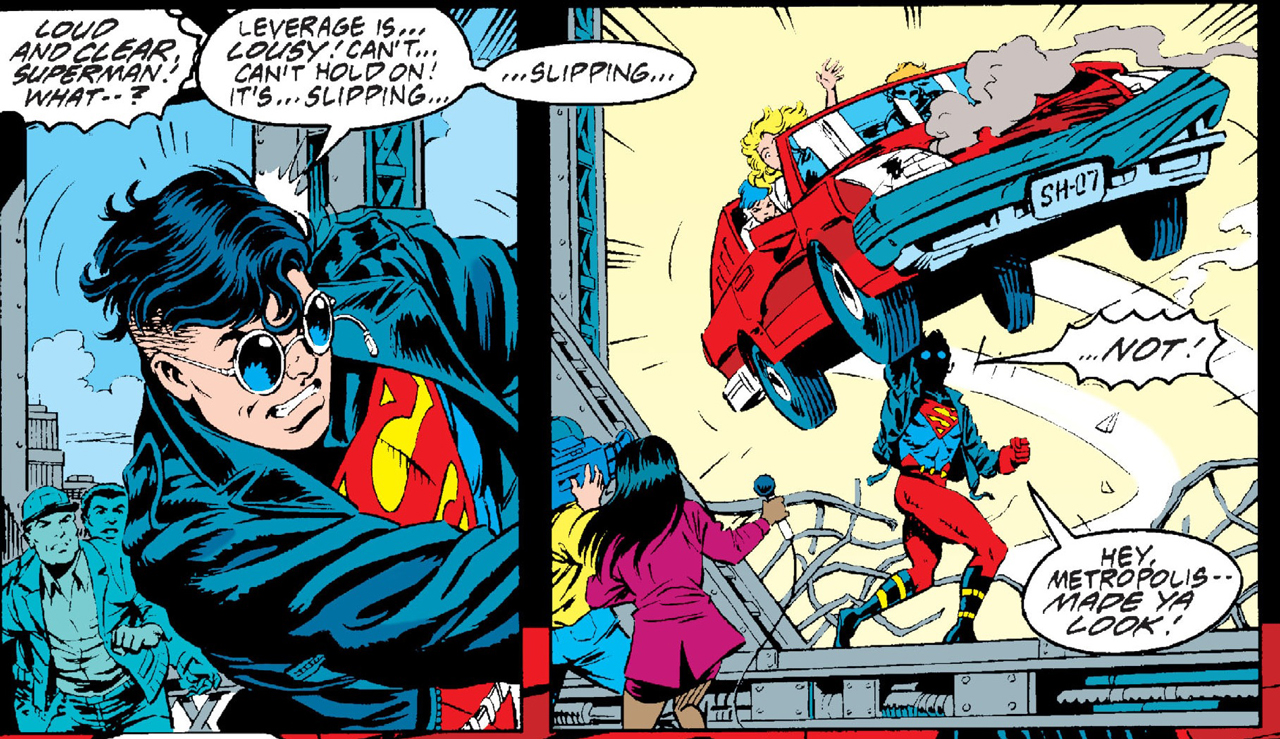 Pop culture references aren’t the only things dated in Superboy’s classic adventures. We’ve established Superboy dressed and partied like a '90s kid. Now it’s time for some examples of him dropping the decade's sick slang. A quick glance through some of his first appearances found these gems…

There’s plenty more where that came from. While we weren’t able to find any examples of him saying “Talk to the hand,” we're sure he would have.

“Reign of the Supermen”