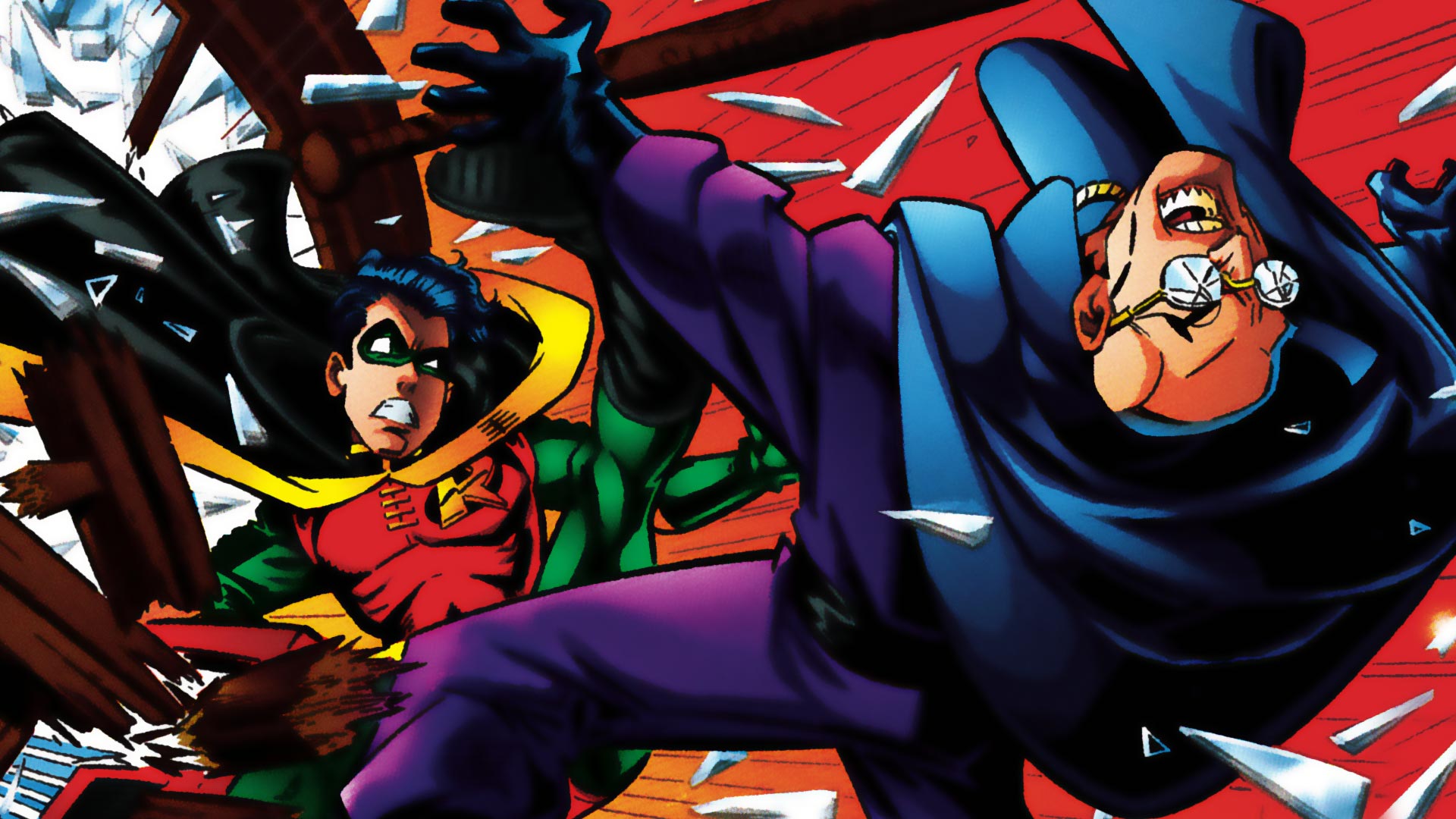 DC Comics features not only some of the most legendary heroes in the world, but also the most iconic villains. Lex Luthor, the Joker, and many others have been replicated in film, animation and video games for years. However, there are times when heroes and villains find themselves encountering new adversaries far different from their regular adventures. Throughout DC’s history, moments have occurred where a hero has found themselves out of their depth in fighting someone both familiar yet unfamiliar to them specifically. Here are five moments in DC where heroes and villains have crossed paths out of their own titles. 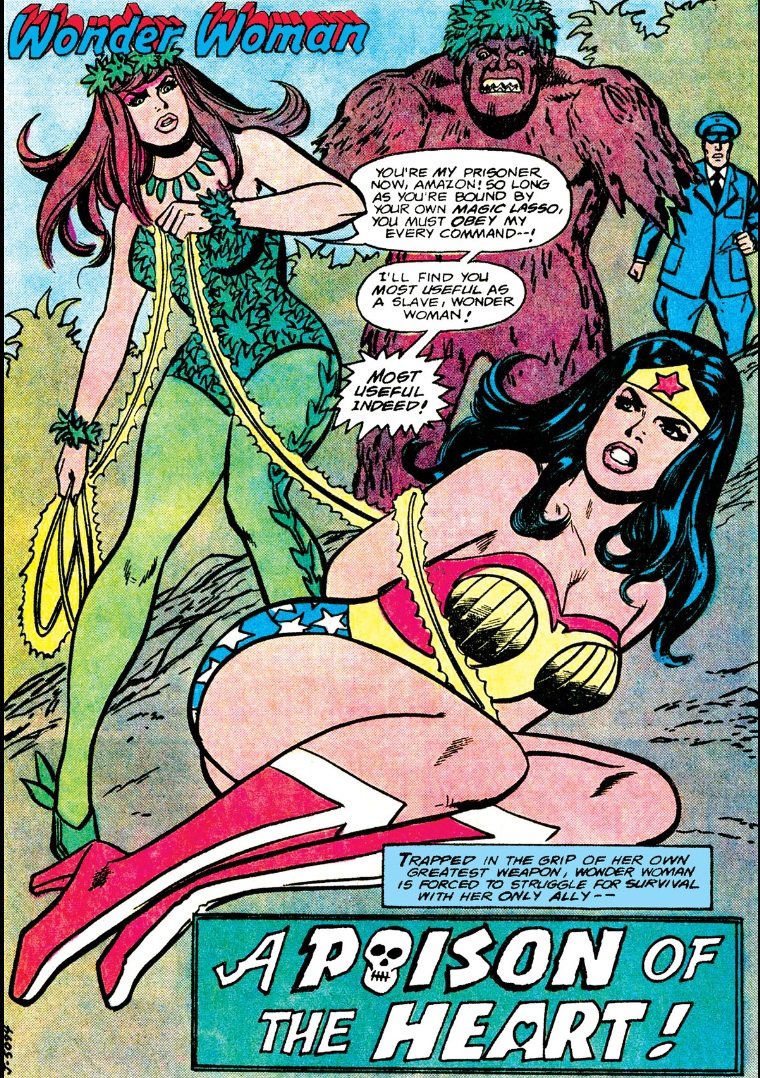 In World’s Finest #251 (1978), the Amazing Amazon tackled one of Batman’s most lethal foes when Diana of Themyscira began investigating the murder of several US Ambassadors via poison. This led her down the obvious trail of poisonous leaves left at the scene of the killings, only to be attacked by a giant plant monster. After battling the creature, she followed the trail back to the Bronx Botanical Gardens and confronted Ivy, overhearing her plot of assassinating the ambassadors on behalf of a foreign dignitary in order to gain his country’s rare “Cupid Root Herb” which would grant her the power to make Batman fall in love with her.

In #252 we learn the (first) origin of Ivy. She was once Lillian Rose who fell in love with her college botanical teacher, Professor LeGrande. LeGrande seduced Rose into stealing a rare Egyptian plant, then poisoned her with it to leave no witnesses. Her body fought the poison and eventually resulted in her complete immunity to toxins and granted her aphrodisiac power. For revenge she turned LeGrande into a giant tree monster with complete amnesia, but when Wonder Woman caught up with the pair and told LeGrande of the story, he attacked Ivy and the two fell into a waterfall. Obviously the wasn’t the last time we would see one of Batman’s chief femme fatales, but it would be in the next decade when her name and origin would transition into Pamela Isley. 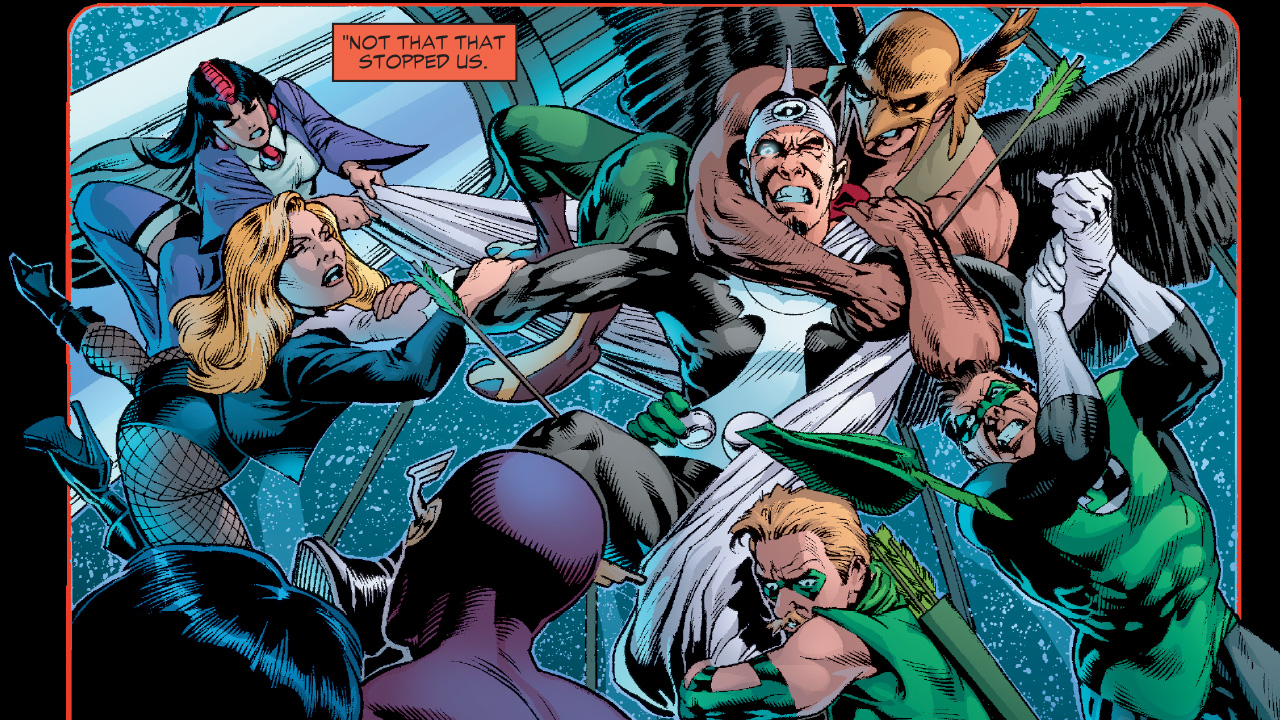 Slade Wilson a.k.a. Deathstroke the Terminator is the Teen Titans' most formidable opponent, ever since his appearance in The New Teen Titans #2. Conversely, Dr. Light had traditionally been a Justice League enemy, but one of the least dangerous ones. In New Teen Titans #19 he’d figured he could do better with the group of teenage sidekicks instead of their mentors, only to get thwarted by the heroes and Hawkman. In Identity Crisis, these former Titan villains level up to the big leagues, taking on the Justice League.

After the murder of Sue Dibney, her widowed husband Elongated Man first suspected Dr. Light, who had brutally assaulted Sue year ago, and rounded a private team of leaguers to apprehend him. When the League descends on Light, they also find Deathstroke, whose abilities center around the full utilization of 90% of his brain, hired to protect Dr. Light. One by one, Deathstroke takes down some of the League’s finest, from Flash and Green Lantern to Hawkman, Zatanna, Black Canary and the Atom. It’s only when Green Arrow catches him in his bad eye with an arrow that the team is able to pin him down momentarily before Dr. Light flashes the area with a blinding escape. Fans at the time were stunned that a single non-powered foe could take down some of DC’s toughest fighters so handily, but the fact remained that they arrived on the scene to apprehend one bad guy and left defeated by both.

WONDER WOMAN VS. THE JOKER 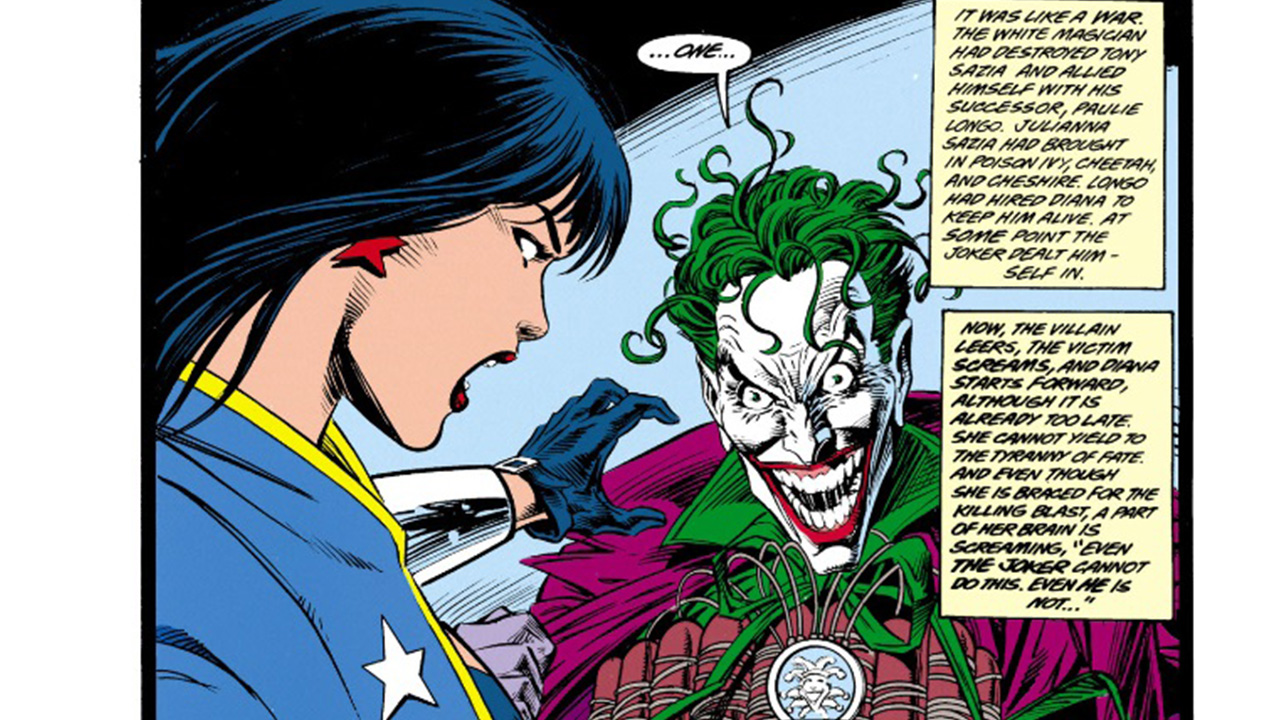 Like Superman and Batman, Wonder Woman was included in DC’s 90s trend of replacing heroes with “extreme” alternative versions of themselves.  Diana was kicked out of the role of Themyscira’s ambassador to Man’s World, and replaced by her sister Artemis as the new Wonder Woman. But Diana continued her fight against crime in a then-modern costume, complete with hot pants, an exposed midriff and trendy new haircut.

Soon after, she was engaged with a number of battles, from fighting old enemies such as Circe and the Cheetah to other heroes’ old enemies like Poison Ivy again! But it was in Wonder Woman #96 where her paths crossed with the Clown Prince of Crime. After tangling with Jean Paul Valley, Joker fled to Boston and offered his services to Julianna Sazia, the Queenpin of Crime. Diana intervened, but was then paralyzed by an extract of the Joker toxin from his lapel. While Joker pranced around telling bad Amazon jokes, Diana mentally extracted herself and spoke to Pan, God of Chaos. Learning to dance to his tune of mischief, she tore herself free from Joker’s poison and threw jokes about clowns right back at him as she beat him up.

BATGIRL VS. THE SHADOW THIEF 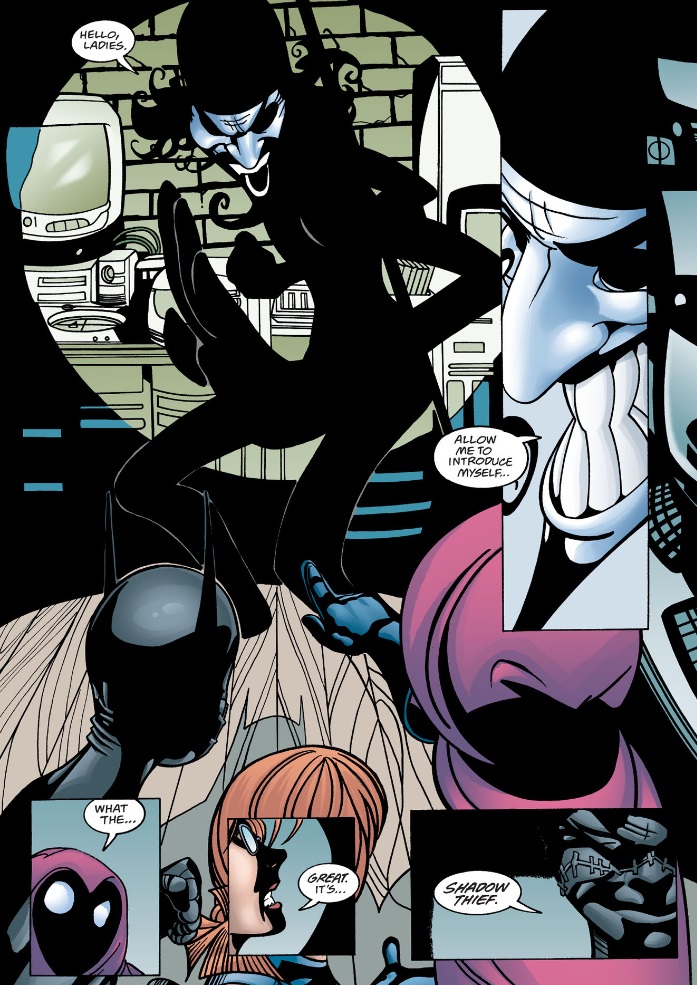 In Batgirl #21, Batgirl (Cassandra Cain), Oracle and Spoiler are holed up in Oracle’s Clocktower when the power goes out and they find themselves stalked by a  deranged version of the Hawkman villain Shadow Thief in the Clocktower. Cassandra, who’d been training for a death duel with Lady Shiva, was intrigued by the possibility of honing her skills against such a unique villain, and challenged him to a fight. The Shadow Thief typically wears a Thanagarian Shadow Field, making him intangible at will and impossible to hit, but Cassandra was able to copy some of his martial arts techniques just by seeing them demonstrated once. Before long, Oracle gets the power working and reverses the polarity, just as Cass lands a potentially lethal punch on the Shadow Thief. Spoiler arrives to assist with CPR, but just as Shadow Thief’s confirmed to live, Cass goes right back to training for her upcoming death duel.

ROBIN VS. THE TOYMAN 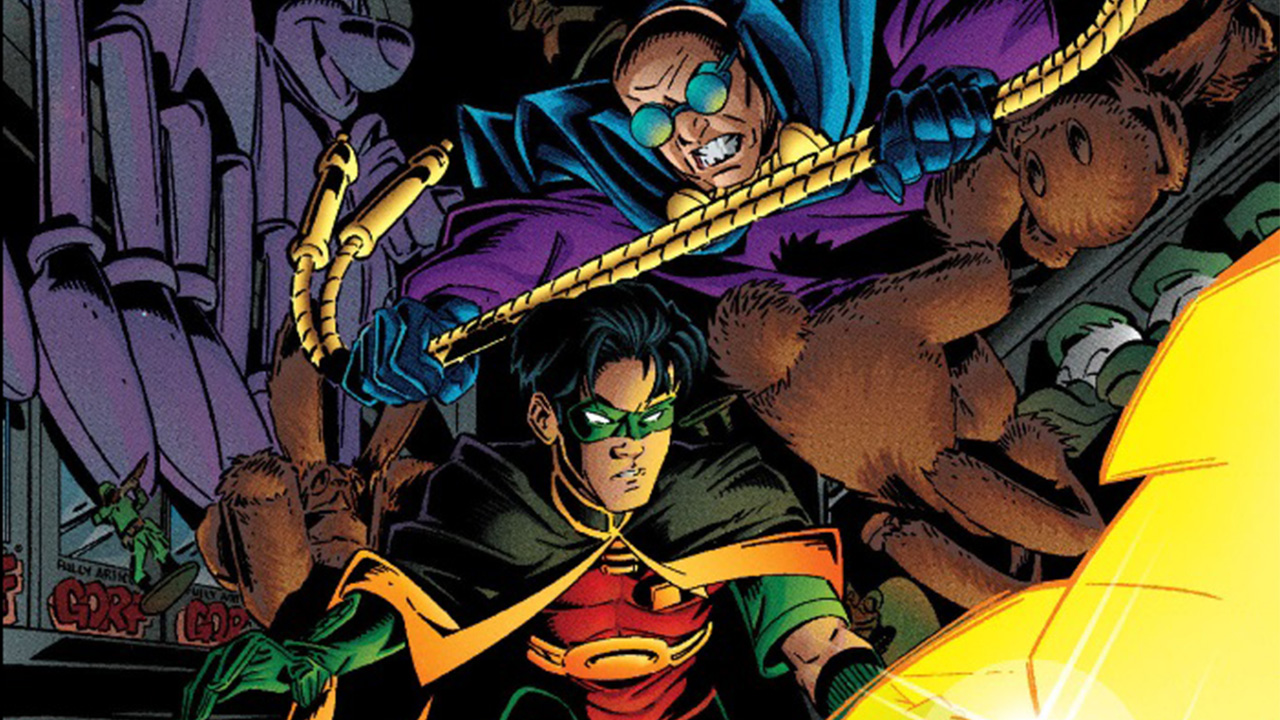 Although Winslow Schott a.k.a. the Toyman is one of Superman’s longest lasting villains – turning toys into weapons being his gimmick – he became even deadlier in the 90s after killing supporting character Cat Grant’s son Adam. In Robin #36, he runs into Ulysses Hadrian Armstrong, a.k.a. The General – a child megalomaniac obsessed with military combat and archvillain of then-Robin, Tim Drake.

The General convinces him to conduct a heist of rare and valuable action toys from a Gotham City collector, all while quoting various figures of war. Schott, not having the greatest affection for children or history, talks to his dead mother in his head and quickly becomes anxious to murder the General. Once Robin speaks with Armstrong’s siblings and learns of the team-up, he locates the pair just in time to stop the heist and save the Ulysses's life, before Toyman goes ballistic on everyone. Robin has to split his focus between battling the General and saving him from Toyman before the GCPD can provide suitable backup. On his own, the Toyman poses little threat to trained professionals; however his insanity and unpredictability made him an easy fit to appear in a Batman title.

What hero/villain match-up would you like to see? Let us know in our Community!