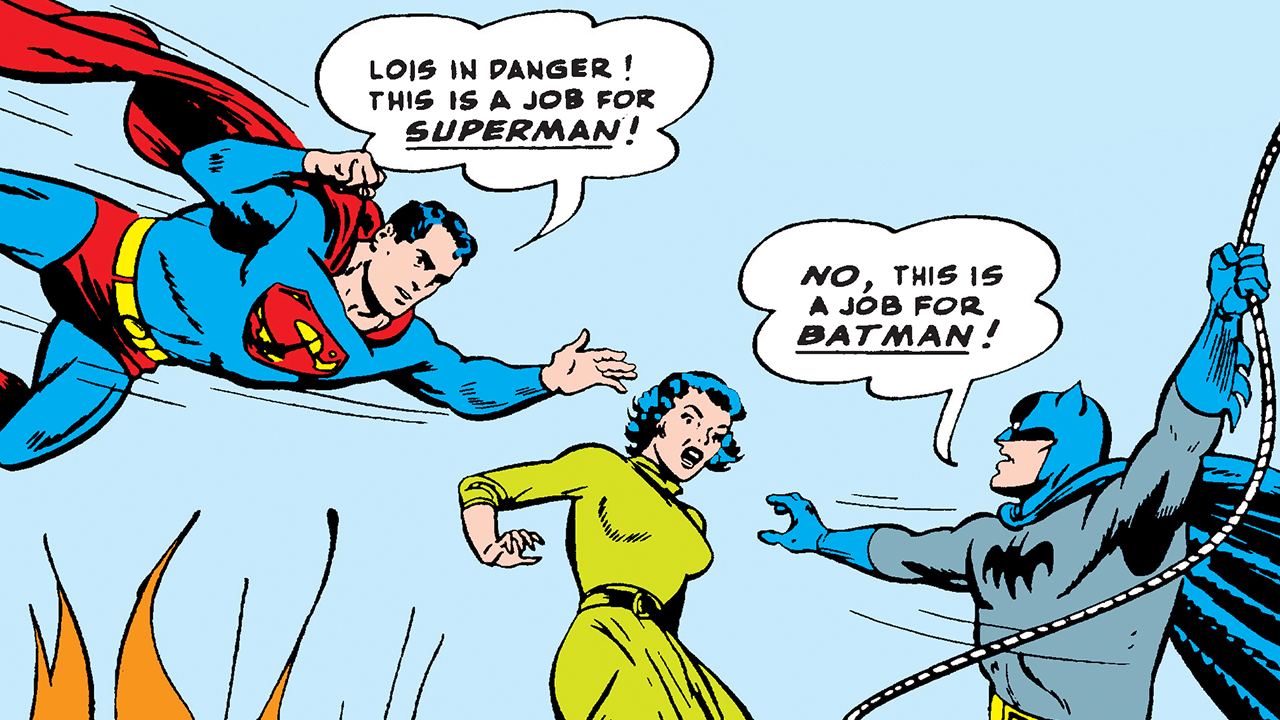 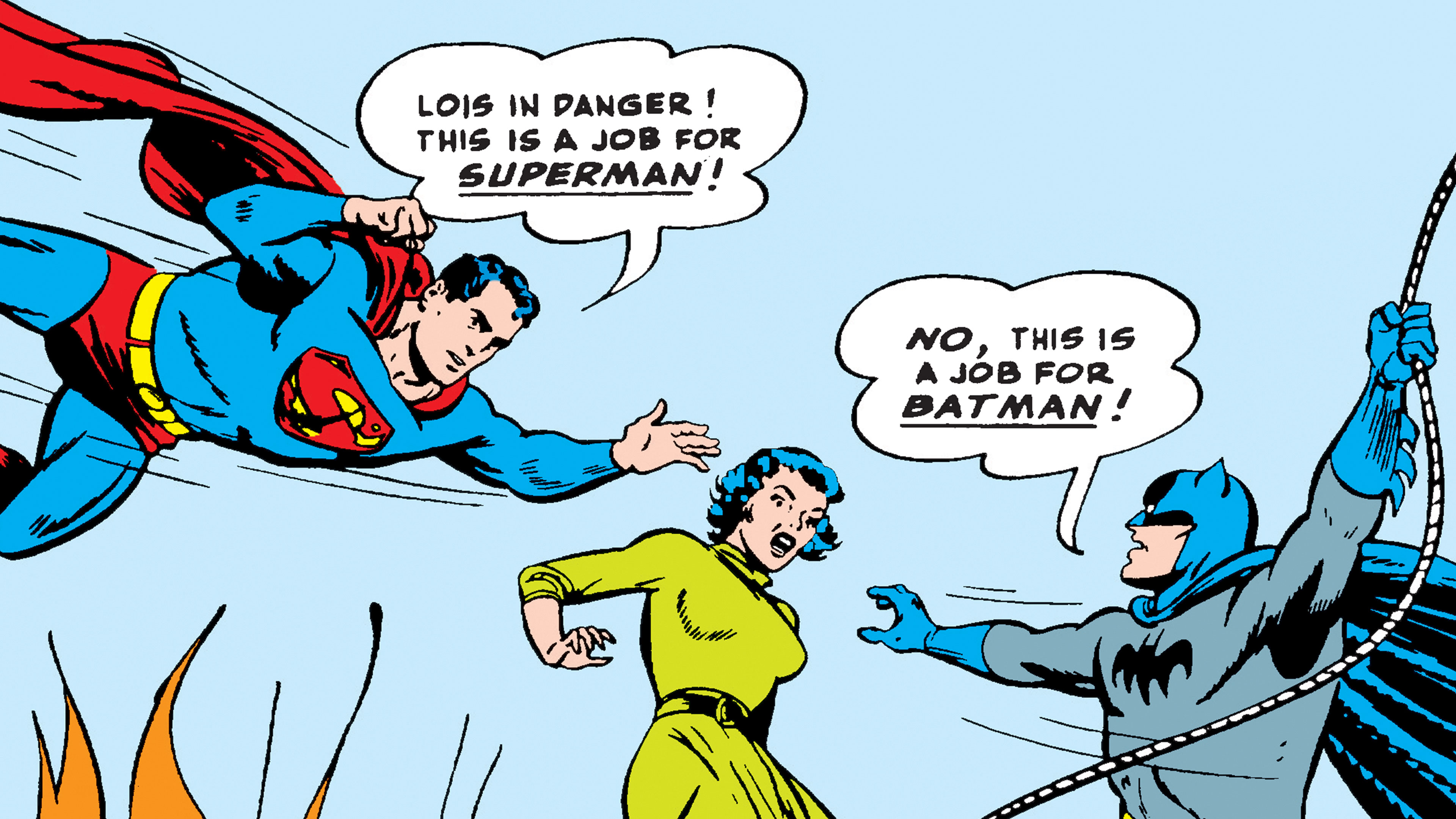 As we celebrate Batman Day, there is a lot of talk going around about the Dark Knight’s strong moral character and how we should strive to follow his example. While that might be true, Batman is far from perfect. Batman has always been a stickler for the rules, except when it comes to the Bro Code. For those who don’t know, the Bro Code is every guy’s manual for how to be a good friend (or a “bro”), and the rules are pretty simple. For example, don’t eat off of another bro’s plate. Or, a bro always has his bro’s back. Simple stuff right? Unfortunately, Batman isn’t a Bat-Bro and plays by his own rules. Here are 5 times Batman broke the Bro Code...

Going after a Bro’s Girl 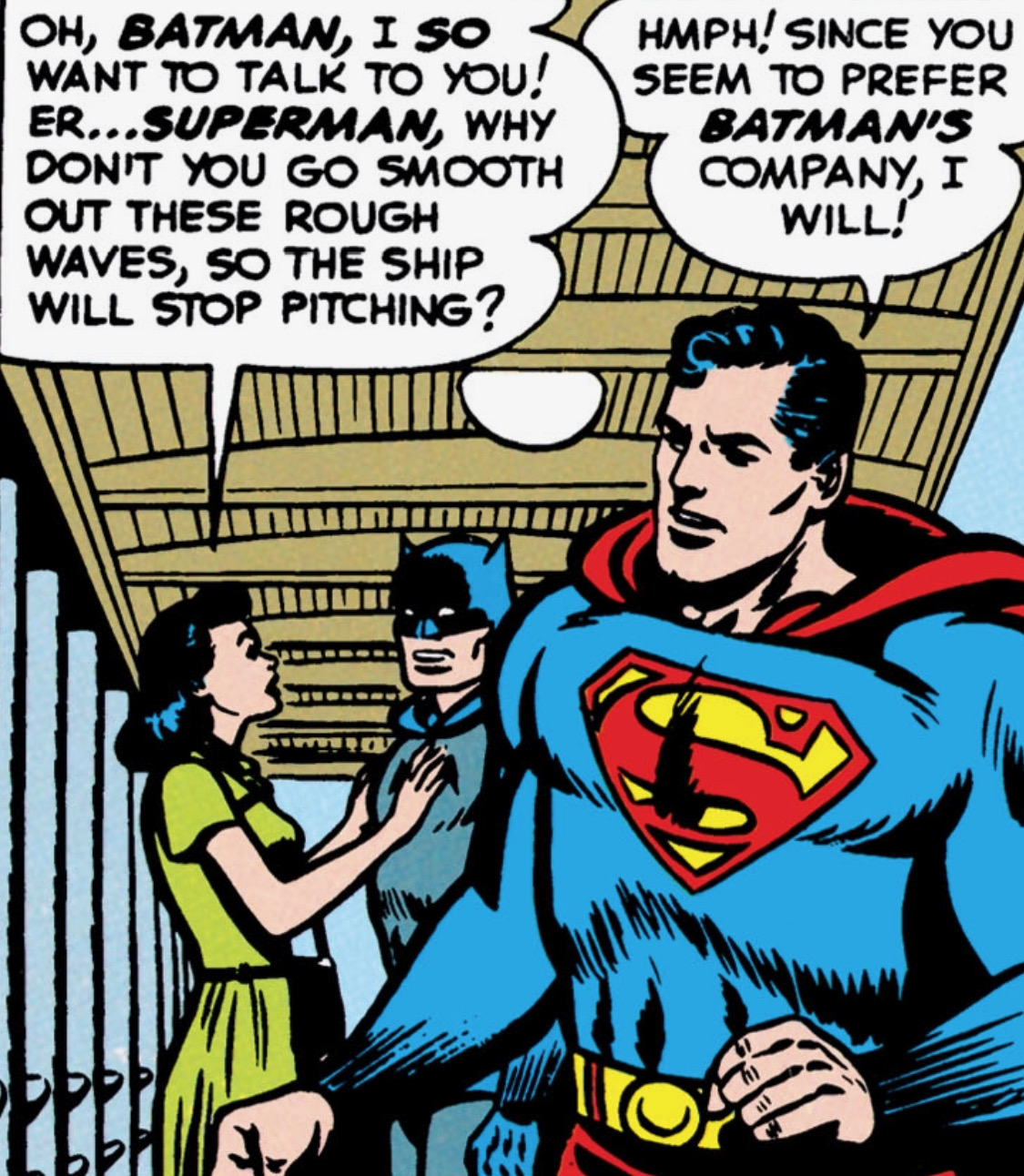 A bro does not go after another bro’s girlfriend, especially if both bros are part of the World’s Finest team. When Batman first met Lois Lane in ‘Superman’ #76 there was some playful flirting going on, which made the Man of Steel uncomfortable. Batman could be forgiven for breaking this rule if it was just a one time thing, but his thirst for Lois can be found across multiple continuities, including the ‘Superman: The Animated Series’ three-parter “World’s Finest.” You know your boy Kal-El loves her Batman, not cool. 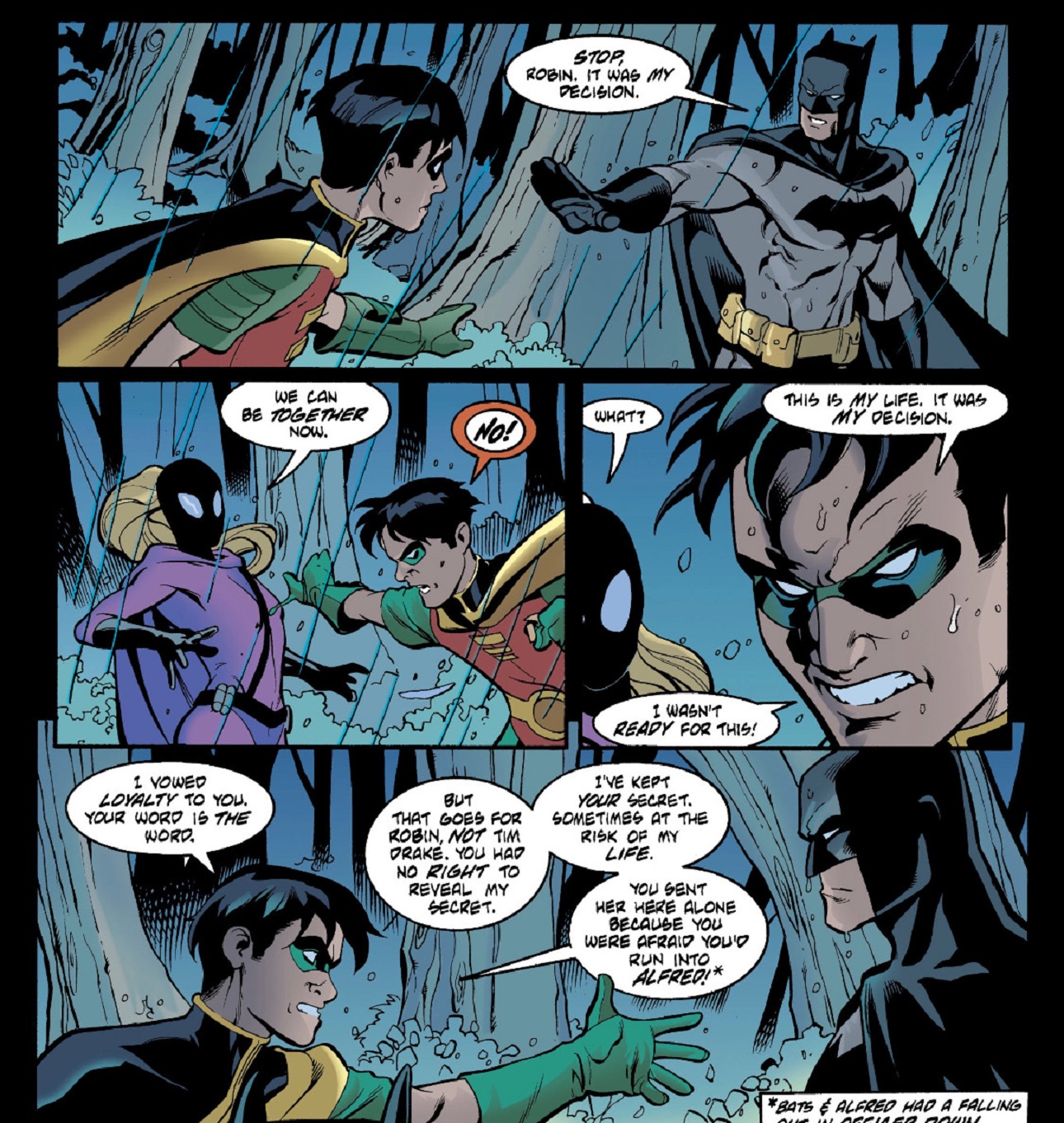 A bro will always keep another bro’s secret. You would think this would be easy for someone like Batman, who keeps secrets from everyone, but he still found a way to break this sacred bro rule. In ‘Robin’ #87 (written by Chuck Dixon and penciled by Pete Woods) Batman revealed Robin’s secret identity to his girlfriend the Spoiler. You’re not suppose to mess with another bro’s romance, so this is also an example of Batman breaking two bro rules at once. Robin was pretty ticked, since he wasn’t ready to reveal his identity to Spoiler yet, and can you blame him?

Messing with a Bro’s Ride 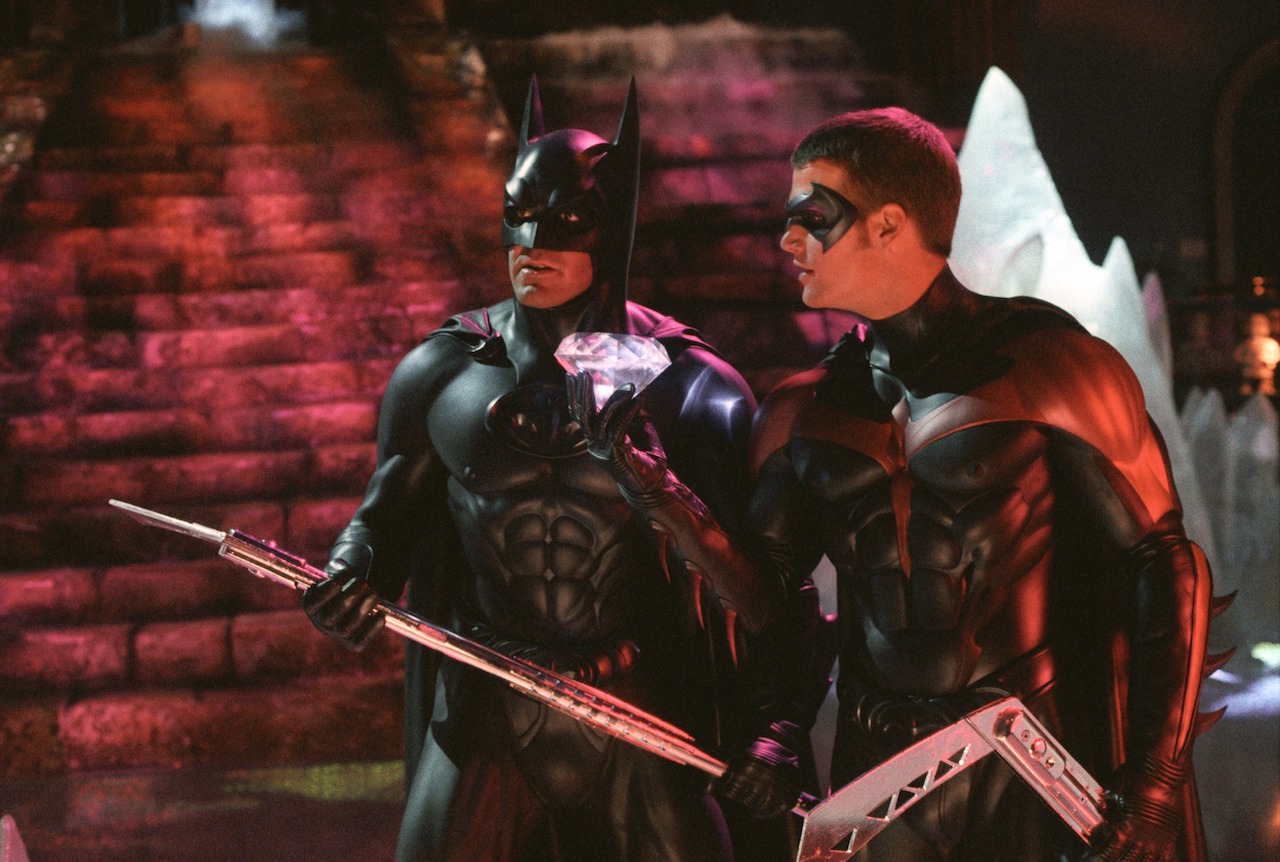 There is nothing more sacred than a bro’s ride, which is why most bros take pride in their vehicles as if they were their own children. You should never mess with your bro’s ride, and if you’ve been paying attention to this article, then you might have a feeling on where this is going. In the 1997 film ‘Batman & Robin,’ the Dynamic Duo were chasing Mr. Freeze with the Batmobile and the Redbird cycle when they began to approach a jump. Batman knew his ride could make that sick jump, but he didn’t think the Redbird could. As Robin pleaded in protest, Batman used his computer system to deactivate the Redbird engines. Batman made the jump, leaving his bro Robin on the other side screaming with the biggest bro fury you could imagine.

Leaving Another Bro Behind 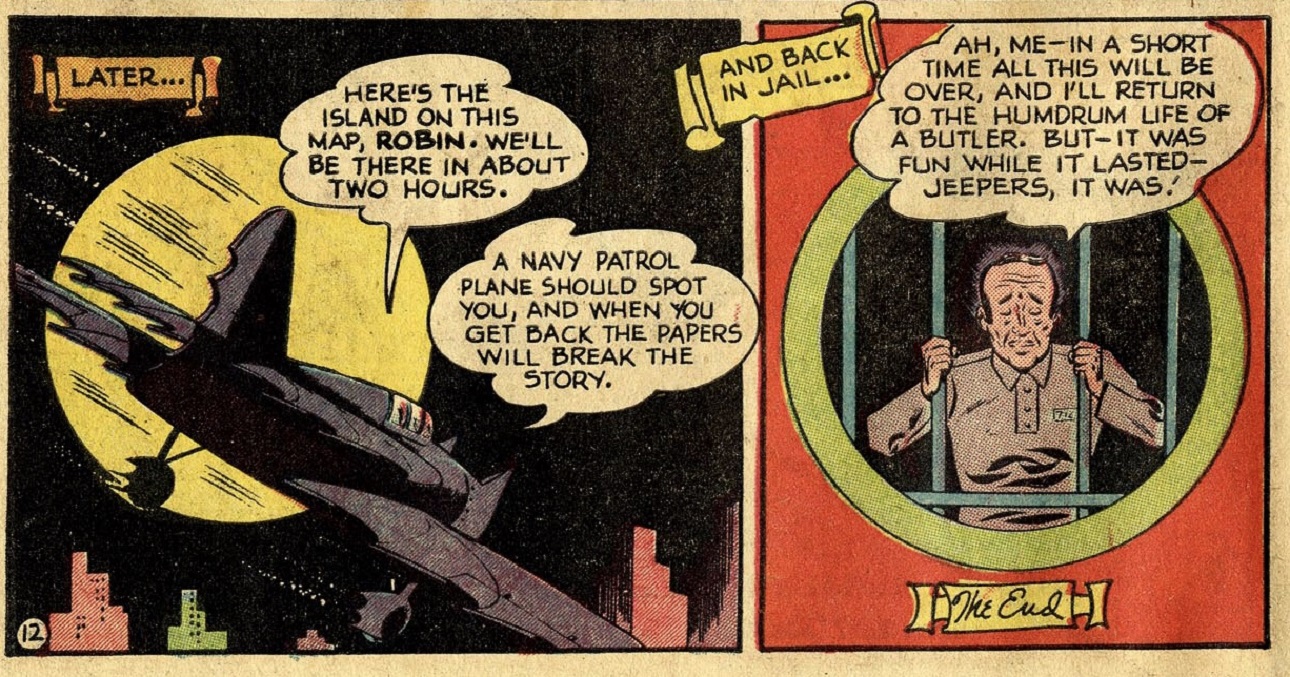 Never make another bro take the fall for you, and never leave a bro behind. That’s right folks, this is another case of Batman breaking multiple bro rules at once! We’re starting to wonder if the Dark Knight has even studied the Bro Code. In 1949’s ‘Batman’ #52 (written by Bill Finger, penciled by Bob Kane and Lew Sayre Schwartz), the Caped Crusader came up with a plan that involved faking Bruce Wayne’s murder and having Alfred take the fall for it. This was all a plan to snuff a villain out, and when the adventure was over Batman decided to let the papers break the story instead of revealing the truth to the police himself. This meant that Alfred had to rot in jail for a bit longer. That’s right, when the story ended Alfred was still in jail for a murder he didn’t commit, waiting for his bro to bail him out. We get it, sometimes a crazy night out ends with a bro or two in jail, but you always bail a bro out.

Siding with a Murdering Manipulative Ex Instead of your Bro 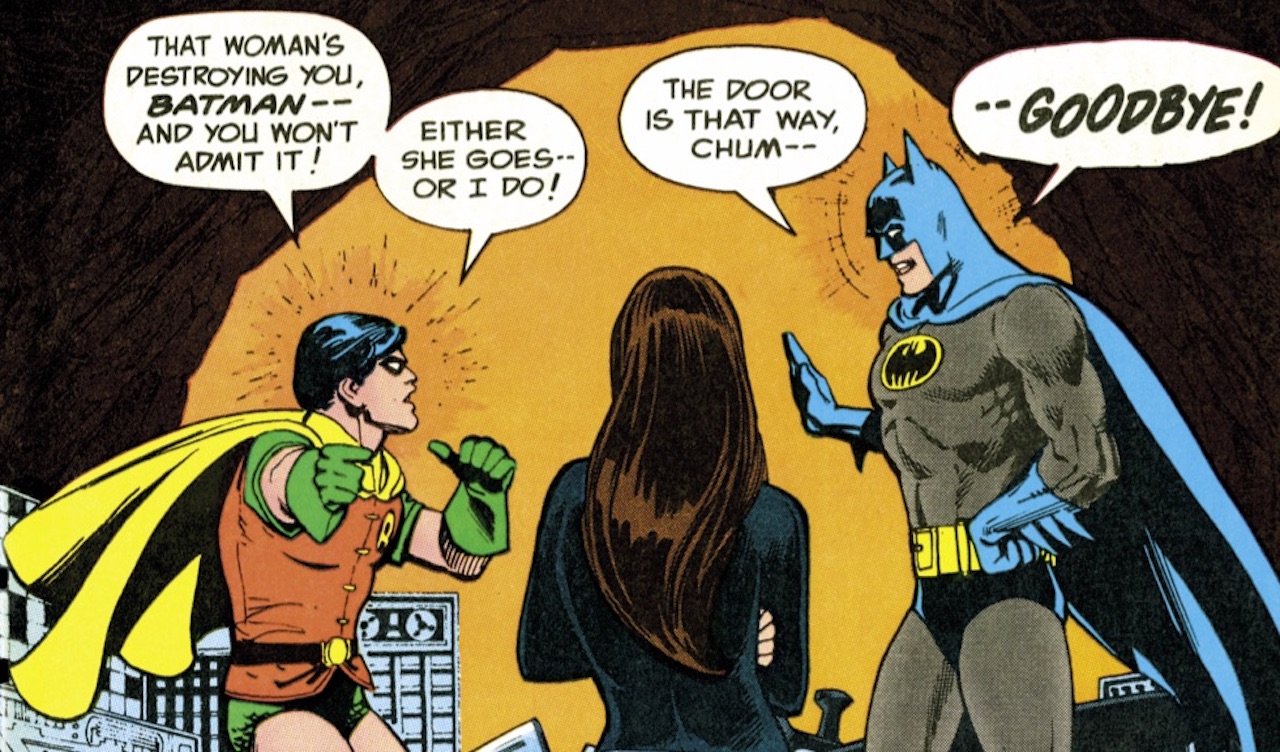 Remember when we mentioned not messing with another bro’s relationship? The rule has special exceptions when your bro’s ex is a murderer and manipulator. Robin is a good bro, which is why he tried to save Batman from Talia’s clutches in ‘Batman’ #330 (written by Marv Wolfman and penciled by Irv Novick). He knew Talia was bad news, and whatever plot she was going to involve Batman in would wind up hurting him. Batman didn’t listen, and he shut out his bro Robin and sided with his evil ex. Batman probably broke about 15 rules with his action alone, including always remain loyal to your bro and don’t choose your evil ex over your bro. Talia has tried to kill Batman multiple times, which makes Batman’s bro judgement super questionable here.

So, what have we learned?

1) Don’t go after your bro’s girlfriend.

3) Don’t mess with a bro’s sweet ride or he’ll scream manpain into the Gotham night.

4) Don’t let your bro sit in jail because you framed him for your own murder.

5) When your bro says that your ex is an evil murderer, consider what he’s telling you.

What’s the worst thing Batman has ever done? Let us know in our Community!