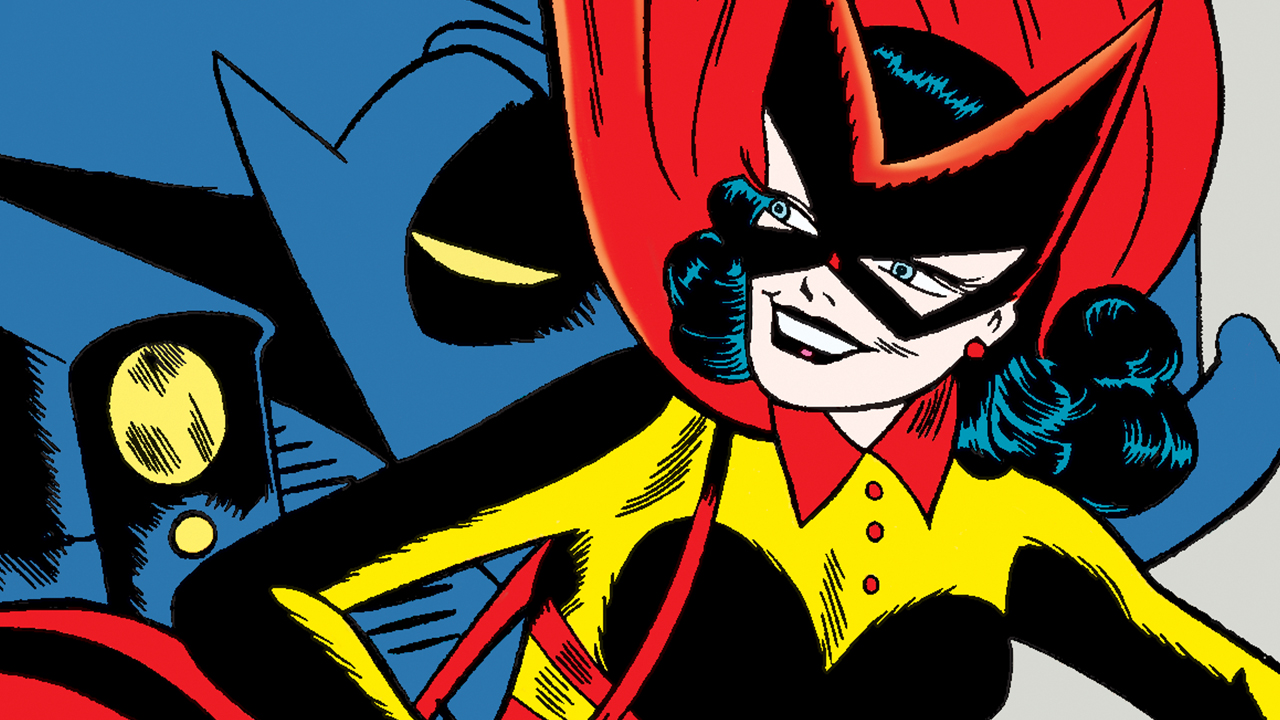 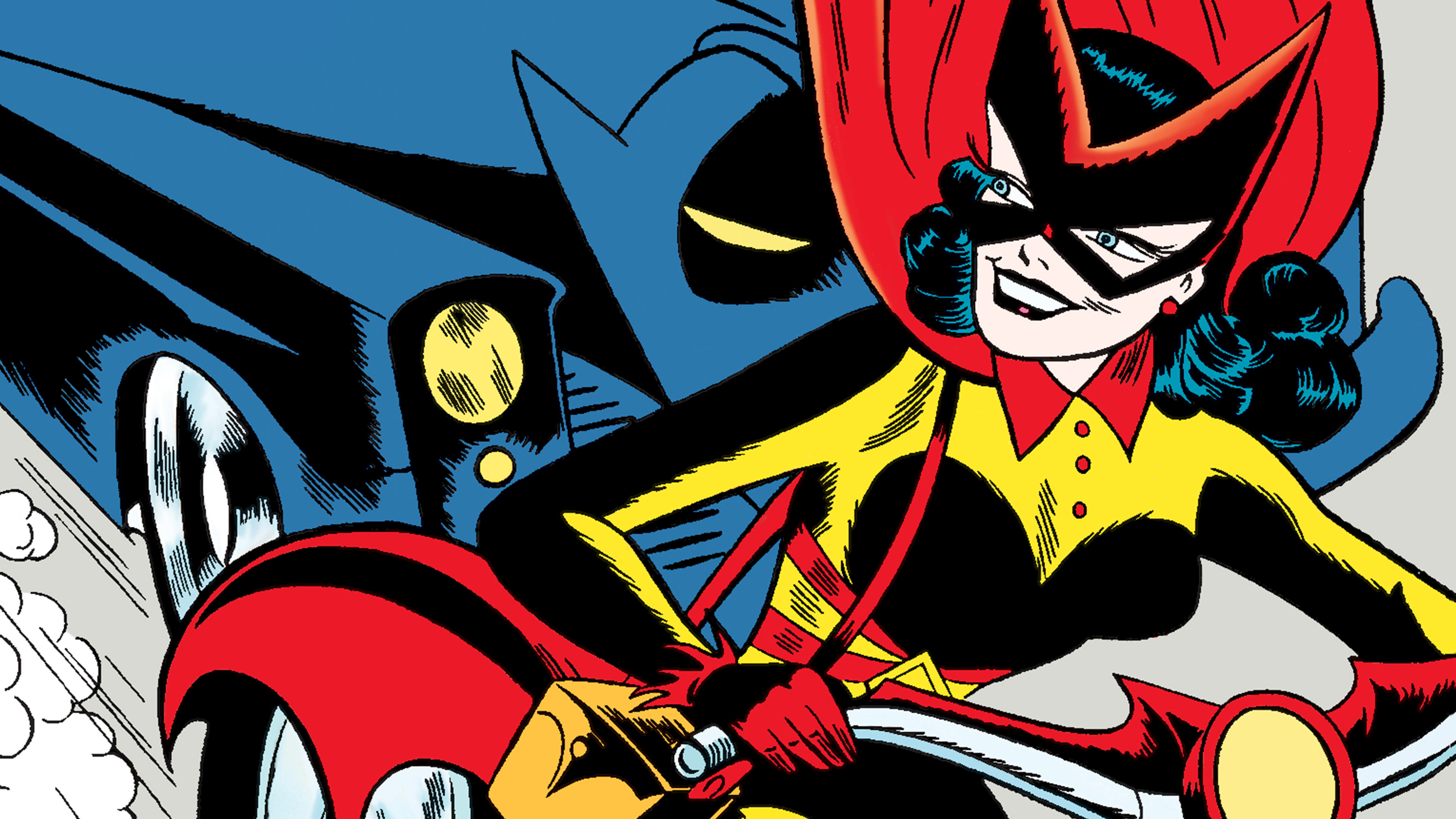 Since her latest incarnation was introduced in 2006's '52', Batwoman has become a fan favorite in the DC Universe, with her own critically acclaimed titles. And she’ll be taking her adventures to the small screen this fall in her own brand-new TV series... 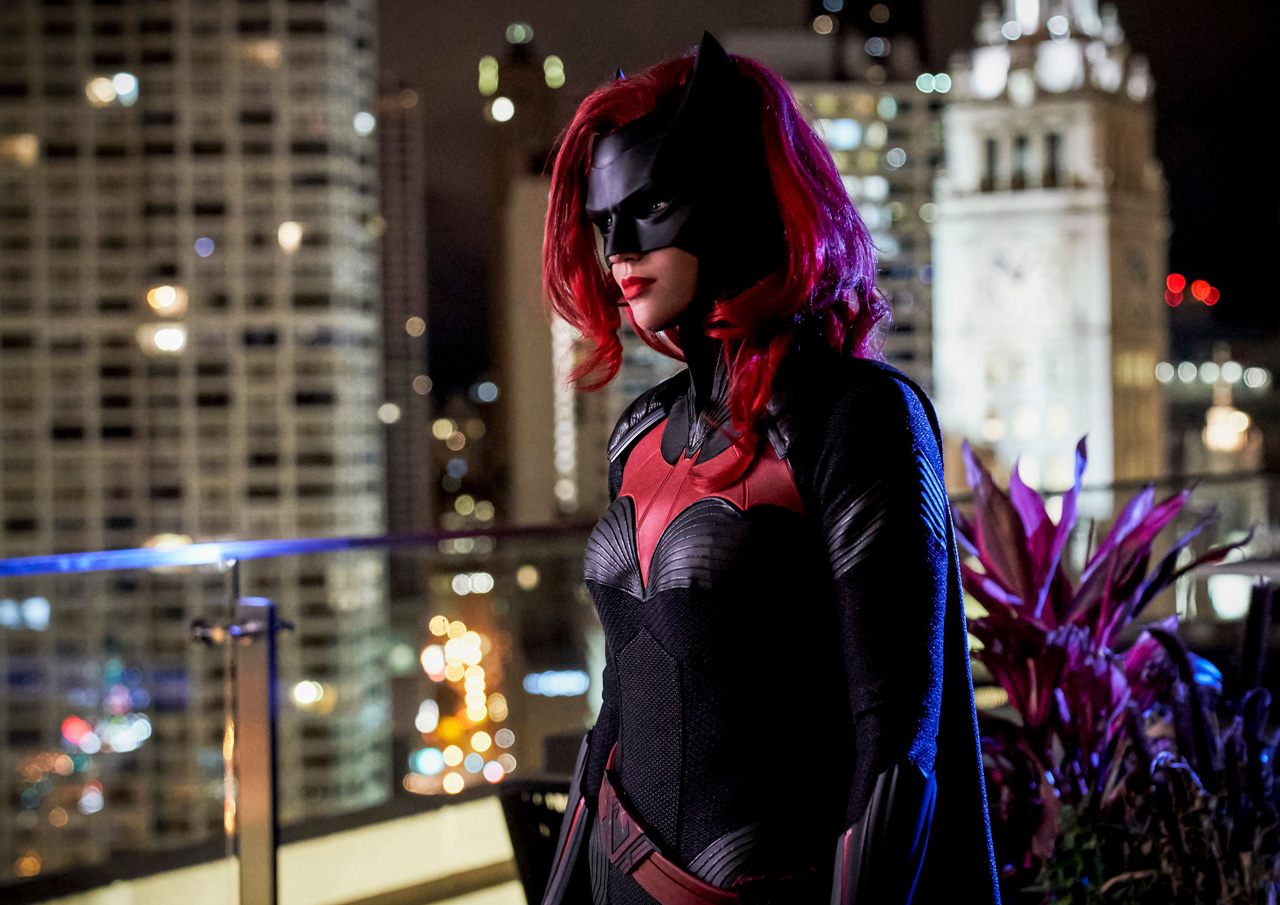 But long before Kate Kane had the mantle, another Batwoman was part of the Silver Age Batman family of the 1950s. Kathy Kane (no relation) was a very...different sort of hero, who fought crime in a very different time. Let’s look at five things Kathy did that you WON'T see today’s Batwoman do... 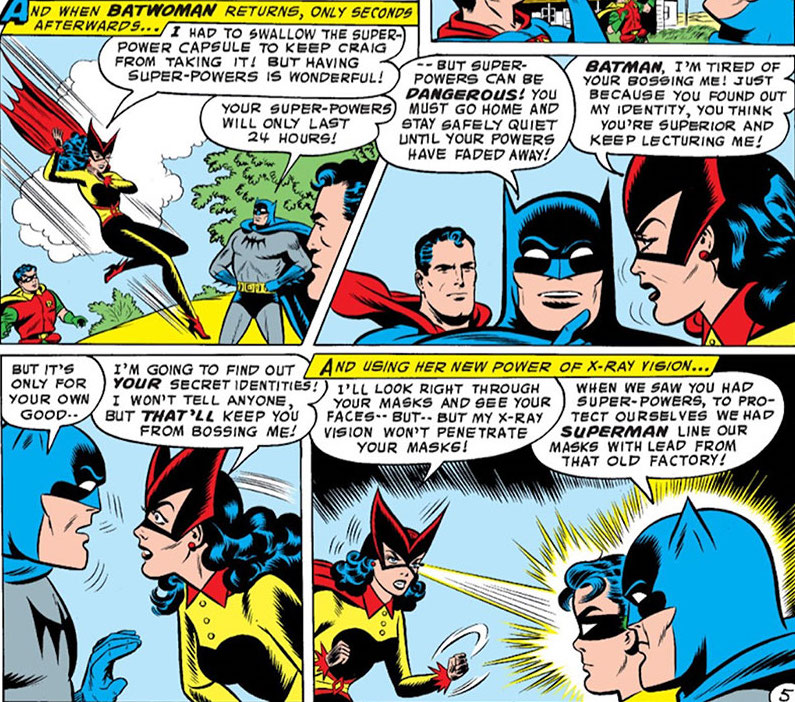 In ‘World’s Finest’ #90 (written by Edmond Hamilton and art by Dick Sprang), Batwoman corners the evil Elton Craig. He has created a capsule that gives Superman’s powers to anyone who takes it. The catch? It only lasts 24 hours! Batwoman takes the pill to save it from the clutches of Elton. She gains the powers of Superman, which brings about an unwanted lecture from Batman on the dangers of superpowers. Holy Mansplaining, Batman! This prompts her to spend most of the day following Batman, Robin, and Superman around in an attempt to discover their true identities. She occasionally calls a truce to help with crime fighting, but once the problem is solved she resumes her sleuthing. The day runs out and she’s no closer to finding out their identities, thanks to an elaborate Ocean’s 13-style tunneling plan from Superman and the Caped Crusaders. On the bright side, she did manage to use her temporary powers to stop a few crimes.

If today’s Batwoman had the powers of Superman, she'd probably have concentrated more on crime-fighting on a global scale instead of trying to crack the secret identities of her pals. 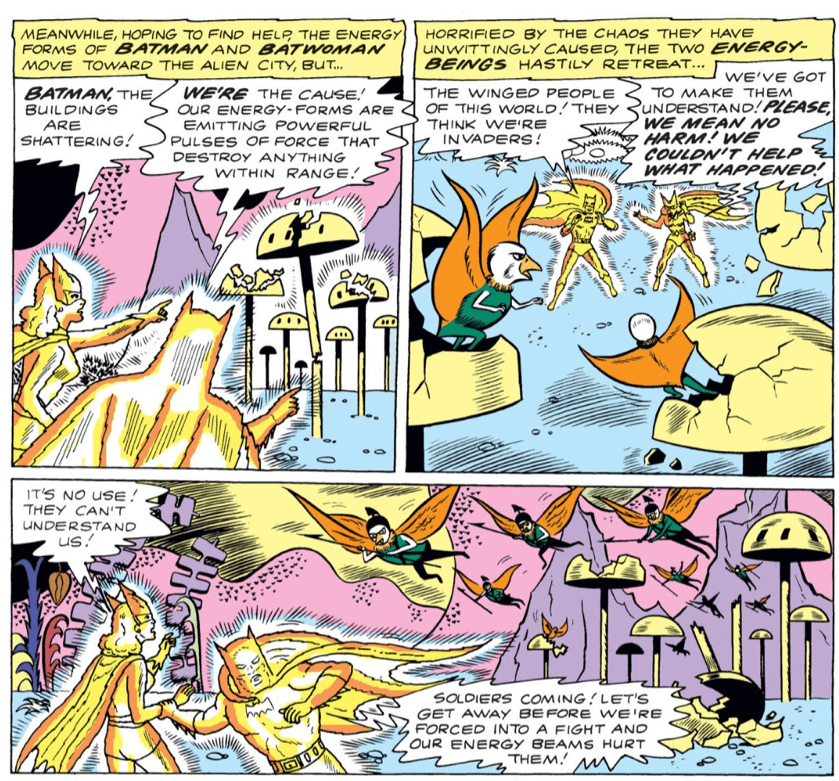 After a freak accident with an alien beam in ‘Batman’ #153 (written by Bill Finger and art by Sheldon Moldoff), Batman and Batwoman are split in two. Their physical bodies stay on Earth while an energy version of them is transported to a strange alien world that resembles an early version of 'Avatar.' They attempt to escape the planet, but quickly discover that their bodies emit energy that they cannot control! Their uncontrollable rays threaten the interdimensional bird people by destroying their egg homes causing them to attack the energy versions of the heroes. Batwoman and Batman run to safety only to find themselves cornered by a giant bat-gecko creature that feeds off their energy. Back on Earth, their physical bodies are able to recreate the accident to rescue their energy forms and merge their two halves back together.

Kate Kane would have immediately deduced what caused the split and would’ve fixed it in two seconds, leaving the bird people’s egg homes unscathed and the Earth would’ve been saved before lunch.

Batwoman gets caught in the middle of a crime competition between Clayface and The Joker during a city-wide space rocket naming ceremony (something we’re all very familiar with) in ‘Batman' #159 (written by Bill Finger and art by Sheldon Moldoff). The general unveils the rocket named after Batwoman then presents her with a crown declaring her the “Queen of Space.” Her title proves to be short lived when The Joker appears and snatches the crown from her head! After a brief battle, it is revealed that The Joker is actually Clayface who then turns into a Sphinx and flies away. Later, she and Bat-Girl (Betty Kane, Kathy’s niece) manage to catch the Joker in a large net while Batman and Robin arrest Clayface. It is never resolved if Kathy Kane received her “Queen of Space” crown back, but I’m guessing it’s locked away in the GCPD Evidence locker.

We have a tough time imagining today’s Batwoman getting a rocket named after her let alone getting crowned at ceremony. Also, she most certainly would have seen the Joker (or rather, Clayface) coming from a mile away. 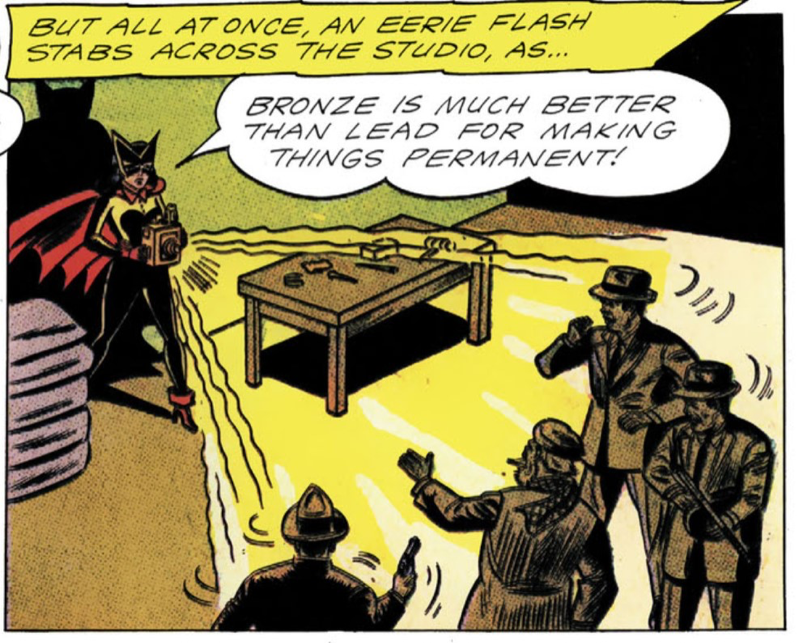 A gang of thieves are stealing bronze sculptures all over Gotham and it’s up to Batman, Robin, and Batwoman to stop them in 'Detective Comics' #302 (written by Bill Finger and art by Sheldon Moldoff). While Batman and Robin track down the thieves, Batwoman follows a mysterious figure lurking in the shadows. After following him back to his hideout, she realizes that the man behind the robberies is Vulcan, the sculptor himself! In an even more disturbing turn, she soon learns the secret behind his lifelike sculptures-- he’s bronzing real people using his high-tech bronzing ray! Batman and Robin quickly find themselves at the wrong end of Vulcan’s bronzing ray, but Batwoman is quick to save them and traps Vulcan and his thieves using their own ray after delivering a pretty killer one liner: “Bronze is much better than lead for making things permanent.”

Ok, we could definitely could see the current Batwoman delivering that line, but it would probably be the other way around while she's brandishing a big weapon. But there’s no way she would kill her enemies by turning them into bronze.: first off, it’s inefficient and secondly, collecting trophies is more of Batman’s thing.

At a showcase featuring the “Inventions of Tomorrow,” Superman has graciously volunteered to be the test subject on Professor Guthrie’s teleportation exhibition in ‘World’s Finest’ #104 (written by Bill Finger and art by Dick Sprang). Batman and Robin are there to support him-- like good friends do -- but Batwoman is nowhere to be found. Batwoman has run out of gas for her Batcycle and stops to get more. She arrives late to the exhibition, but is just in time for Batman to scold her tardiness. Once he’s done, Batwoman has the chance to relay her important information that she overheard at the gas station from Luthor’s men (who also needed to fill up their tank). Lex plans to sabotage the exhibition and Superman is in grave danger. Professor Guthrie is unmasked as Luthor and the day is saved.

Let’s be honest, Batwoman’s motorcycle probably runs on some high-tech Wayne Enterprises alternative energy core, so she wouldn’t need to stop for gas (nor would she run out in the first place, for that matter). She would also immediately see through Luthor’s pathetic attempt at a disguise.

Although it's tough to picture Kate Kane’s Batwoman doing any of the above things, we have to thank Kathy for paving the way for her and the other female super heroes of today. Check out both versions of Batwoman here on DC Universe and be sure to watch Ruby Rose as Kate Kane in 'Batwoman' this fall on the CW!

What's your favorite Batwoman adventure? Let us know in our Community!