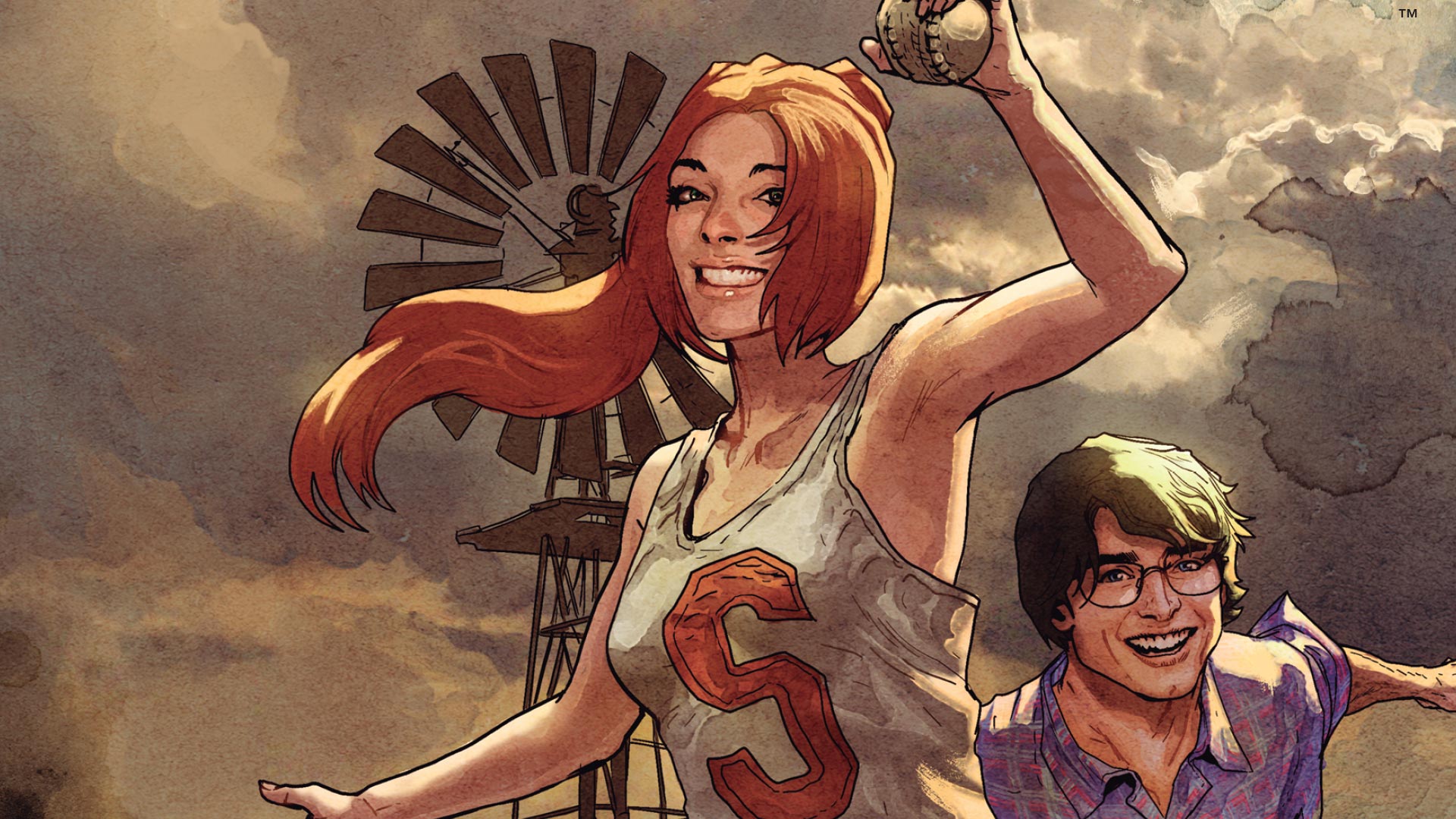 Breaking news from the Daily Planet -- Warner Brothers Television has found its next Lana Lang! As Deadline just revealed, Emmanuelle Chriqui has been cast as Lana in TV's upcoming Superman & Lois. If you’re not familiar with Lana, she’s one of Clark Kent’s childhood friends, and, in some iterations of the Superman story, his high school sweetheart. She’s had quite the journey -- as a First Lady, a Legionnaire, a traitor to the human race,  a superhero, and so much more. Here are 5 fast facts about Lana Lang to prepare you for her next television incarnation.

SHE WAS THE ORIGINAL DANA SCULLY 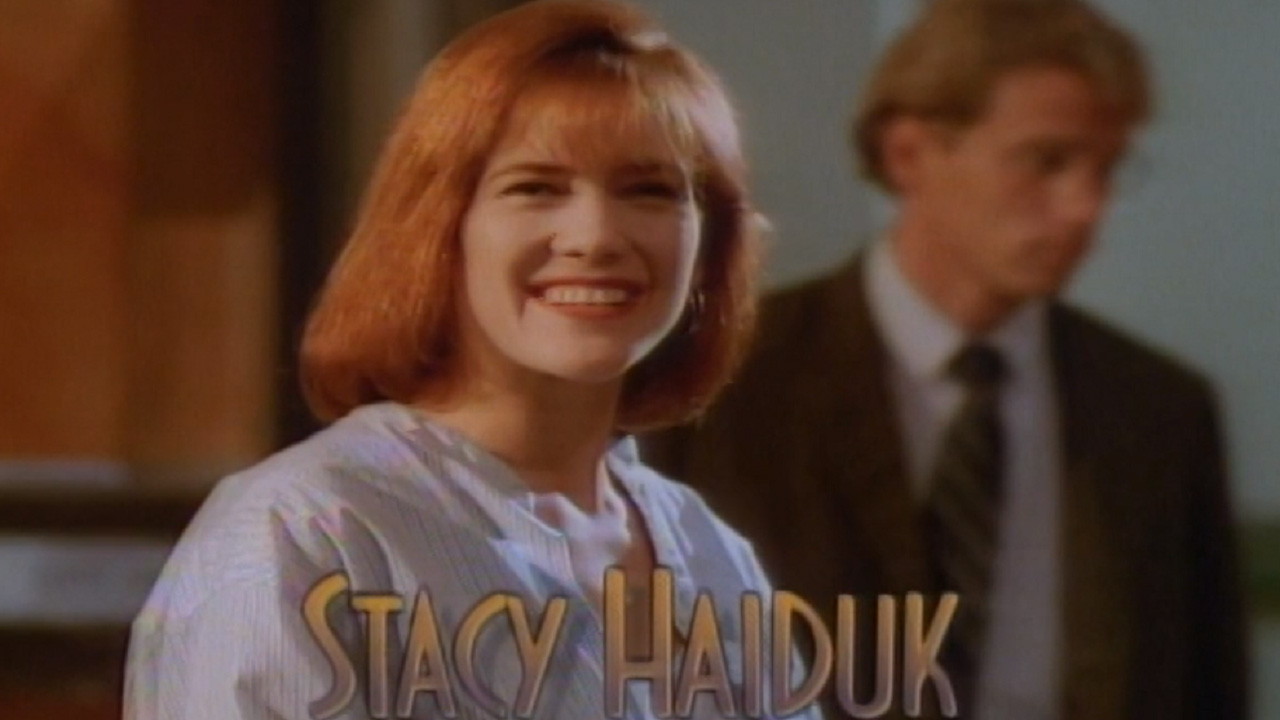 Years before FBI Agent Dana Scully partnered with Fox Mulder to investigate extraterrestrial activity, Lana Lang and Clark Kent worked for the Bureau for Extra-Normal Matters, introduced in The Adventures of Superboy season 3, The Bureau was a government agency tasked with tracking and investigating alien life, which put Clark “Mulder” Kent in a difficult position. Like Clark, Lana, played by Stacy Haiduk, may have just been a Bureau intern, but she excelled as one of their best investigators, and was constantly discovering things most of her superiors had missed. Occasionally, Lana wound up saving Superboy’s life, rather than being a damsel in distress. Stacy Huiduk was the only cast member to appear throughout all 4 seasons of the underrated series. If you’re looking for a fun entry-point episode, we’d recommend “Hell Breaks Loose,” where Lana helps a ghost reunite with his lost love.

SHE HAD A SECRET HUSBAND AND CHILD 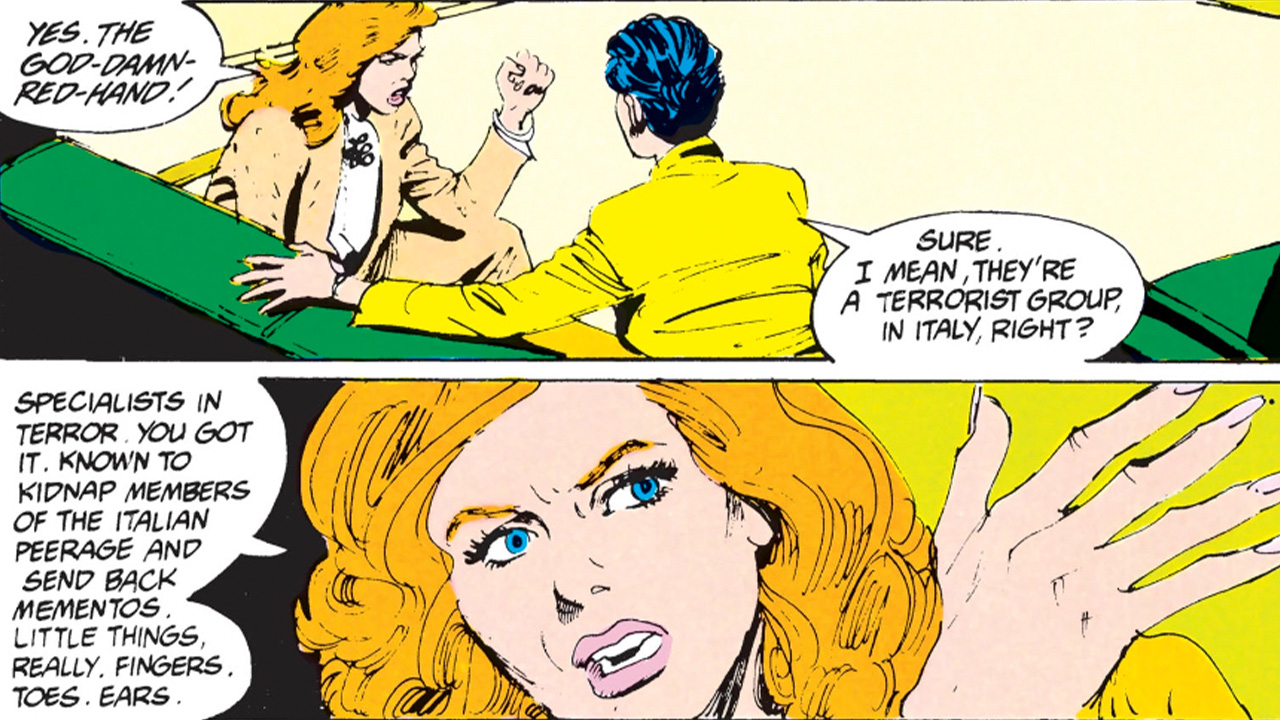 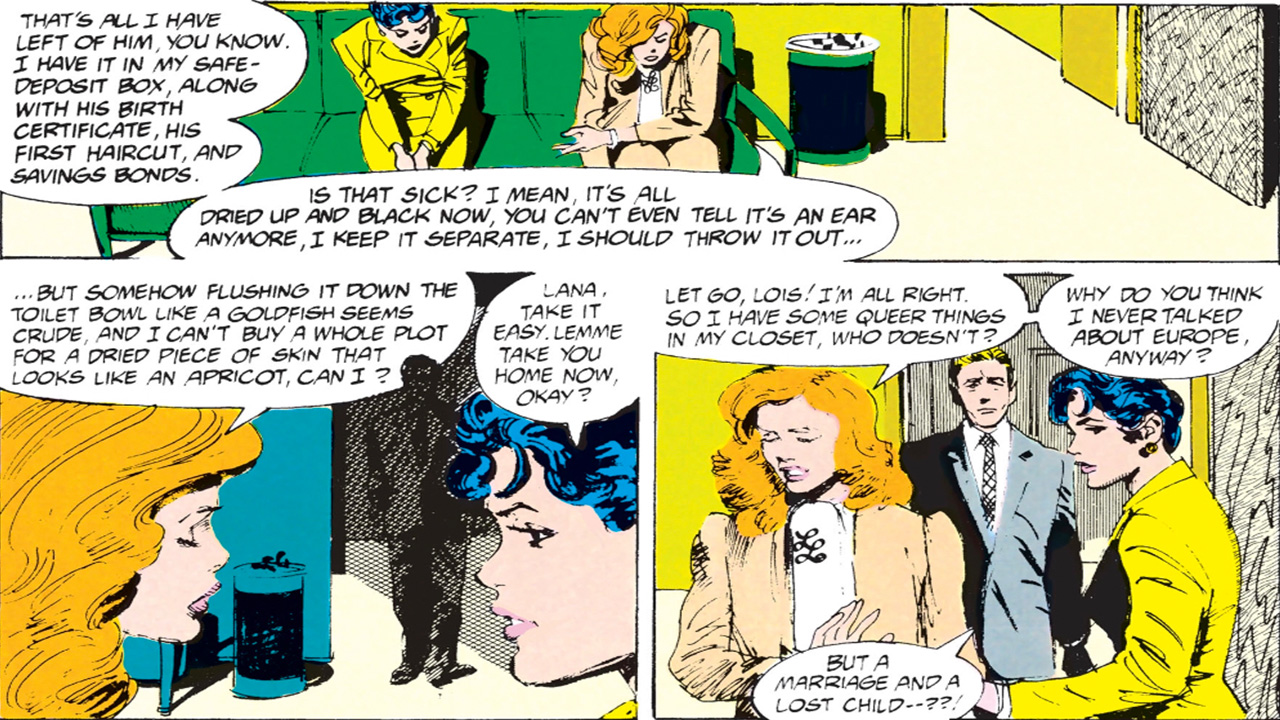 For years Lana and Lois had a playful rivalry for Superman’s affections, until Lana realized the Man of Steel loved Lois. Accepting defeat, Lana, by then a journalist herself, took an assignment in Europe, and left the U.S. in 1971’s Superman’s Girlfriend, Lois Lane #109. Aside from a brief visit in 1975’s Superman #284, Lana was absent for over six years until returning to Metropolis in 1977’s Superman #317. It was clear that Europe had changed her, and Lana’s new carefree, playful attitude was a far cry from the intense person she'd once been. Lana never talked about her time in Europe, until a child abduction case brought her traumatic memories to the surface in 1986’s Lois Lane #2. During Lana’s “lost years” in Europe, she had married an Italian nobleman, and a baby soon followed. A group of terrorists kidnapped the baby, and later sent Lana his dismembered ear. Sadly, Lana’s marriage didn’t survive the tragedy. She left Europe, and tried to cope by keeping the incident to herself. Years later, Lana was able to open up to her former rival Lois, who helped her cope with her feelings and find closure.

SHE WAS AN ALIEN SLEEPER AGENT 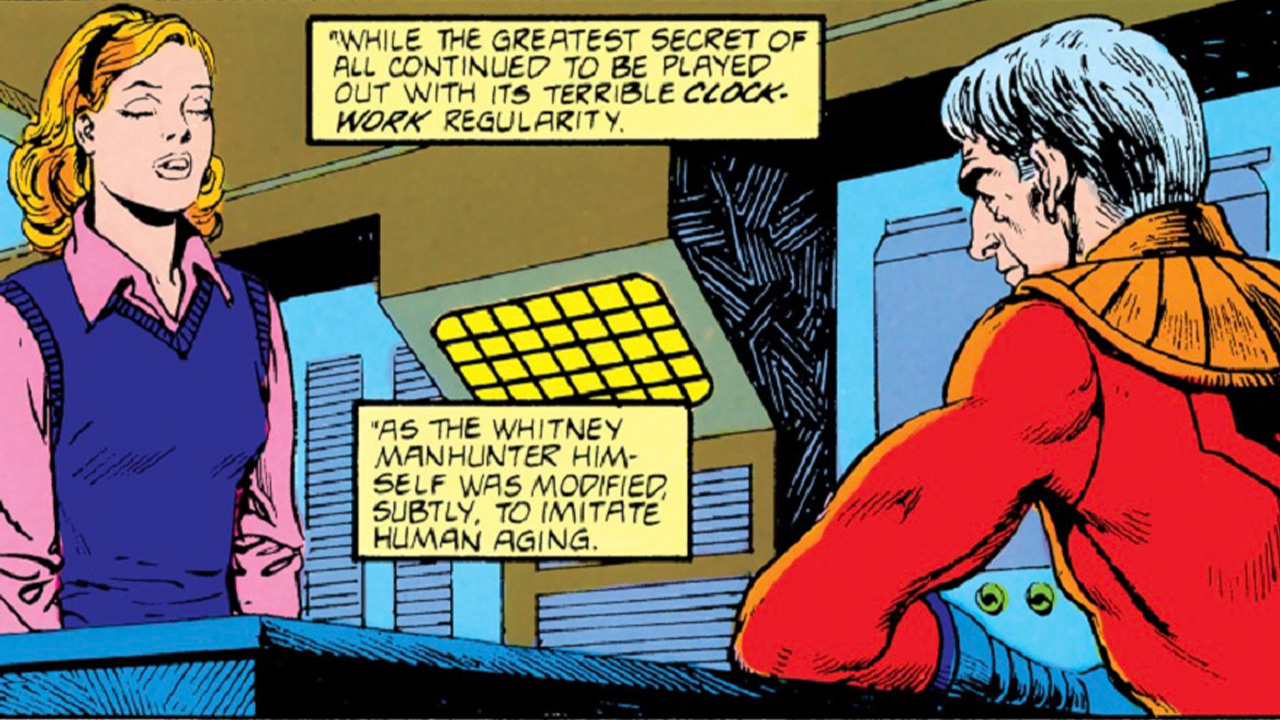 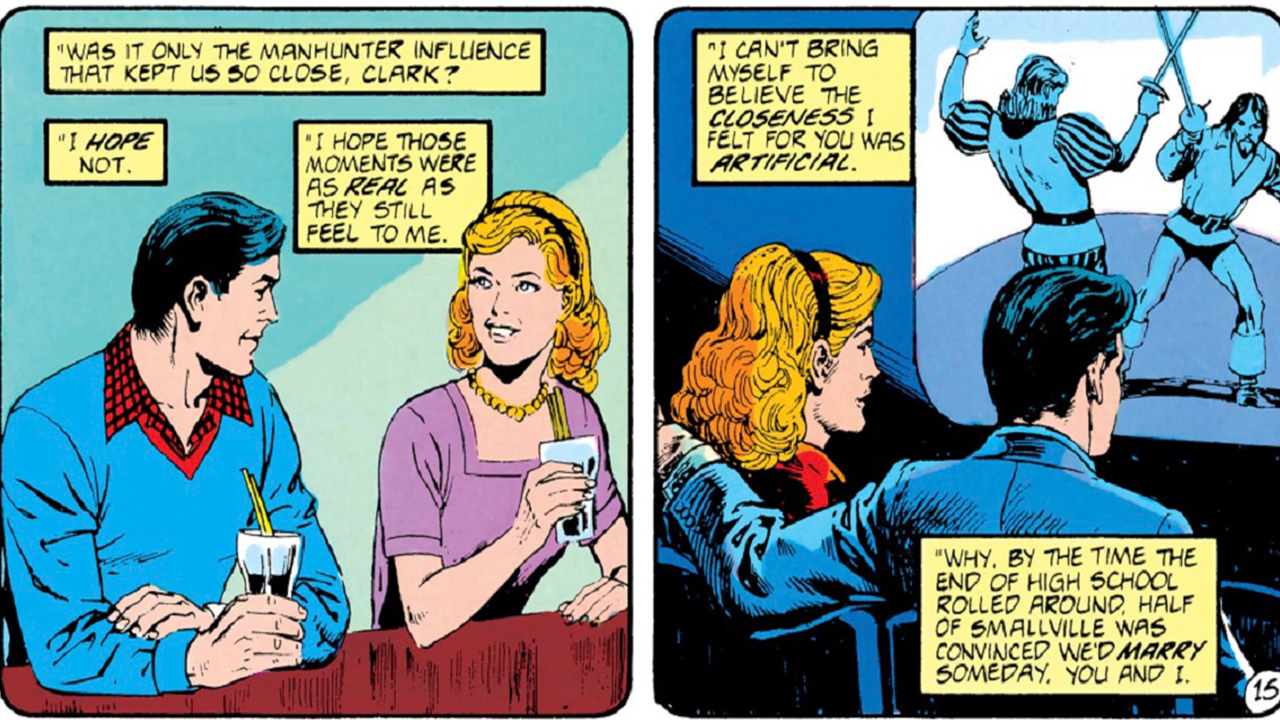 Lana Lang’s biography is full of surprising story beats. For example, did you know that as an infant she was abducted by alien Manhunters and brainwashed to spy on Clark Kent? As detailed in World of Smallville #3-4, Lana spent her childhood getting close to Clark by day and reporting to her Manhunter agents by night. By the time she reached adulthood, her programming caused her to follow Clark when he settled in Metropolis as Superman. Lana was unsure how much of her feelings for Clark were genuine, and how much was due to the programming. After Lana was freed from the Manhunter’s influence in Action Comics #596, she was finally able to heal her shattered mind and live life for herself.

If a DC Universe resident were to look at a book chronicling First Ladies of the United States, they would find Lana Lang’s name in there right beside Betty Ford, Jackie Kennedy, and Eleanor Roosevelt. In 2000’s Superman #162, Lana’s husband Pete Ross was selected to be Lex Luthor’s running mate when he ran for President of the United States. Although Lana recognized Lex wasn’t a good man, she privately admitted that if something happened to Luthor her husband would become President, and his success would heal their fractured marriage. As Second Lady, Lana spearheaded many charitable causes, including education and AIDS research, but her marriage never improved. In Action Comics #806, Lana left the Vice-Presidential residence and separated from Pete. Not long after, the Luthor Presidency ended in shambles, and Pete Ross was quickly inaugurated as President. Since she and Pete were not yet divorced, this made Lana the country's First Lady of the United States. President Ross expressed hope to Clark that he could patch things up with Lana, but he resigned from office after a few weeks. This makes Lana the only modern First Lady who never resided in the White House. Next time you read a comic with Lana, remember -- she’s an American icon. 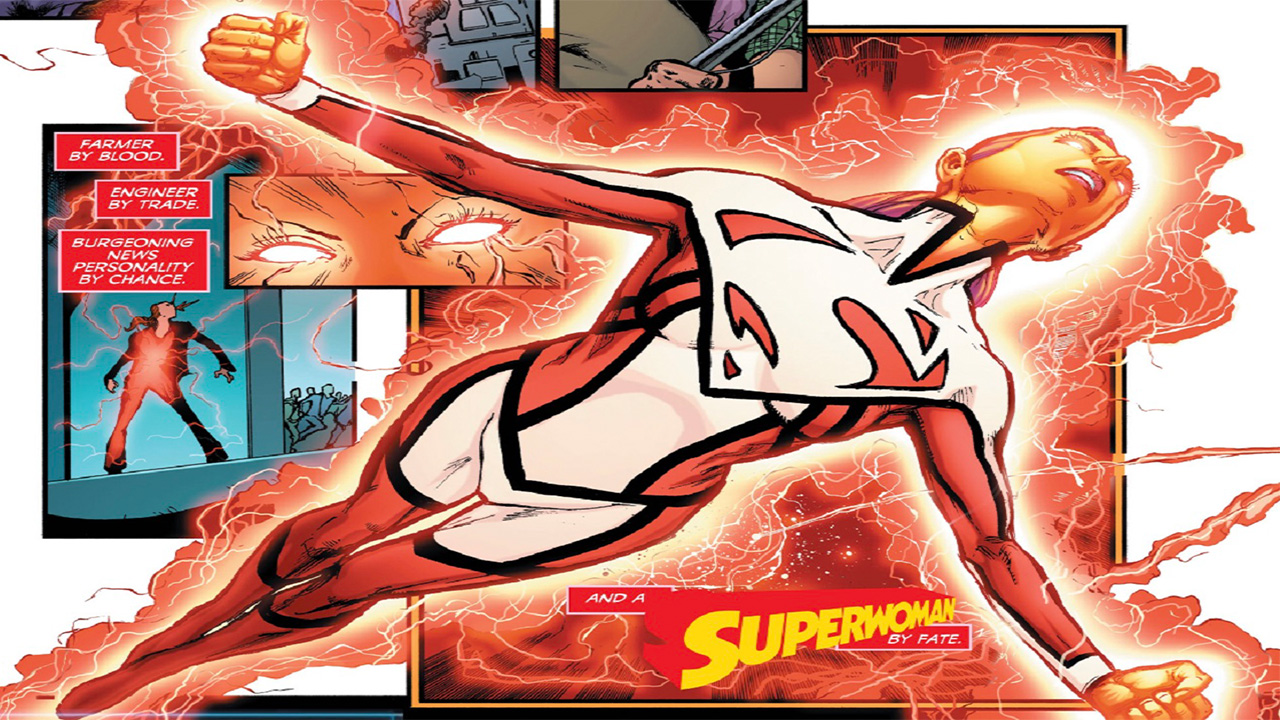 Although most people see Lana Lang as little more than a supporting character in the Superman franchise, she’s actually had a few costumed identities of her own. Decades before Helen Slater and Melissa Benoist suited up, Lana briefly became the first Supergirl in 1951's Adventure Comics #167. The teenage Lana thought she had acquired powers, but it was just a trick from Superboy. In Superboy #124, an alien gifts Lana a magic ring, which gives her insect powers. Lana occasionally fought crime as the Insect Queen, and in Adventures Comics #355 she was inducted into the Legion of Super-Heroes as an honorary member. Lana’s most recent heroic stint came after she absorbed energy from a dying Superman. The energy transformed Lana’s body, and she began fighting crime as Superwoman. Lana’s heroic exploits were chronicled in the 2016 Superwoman title, its first arc brilliantly written and illustrated by DC superstar Phil Jimenez. Superwoman was one of the best written titles of the Rebirth era, and it doesn’t get talked about enough. If you want to get to know Lana better, check it out!

Are you looking forward to seeing Lana Lang on SUPERMAN & LOIS? Let us know in our Community!