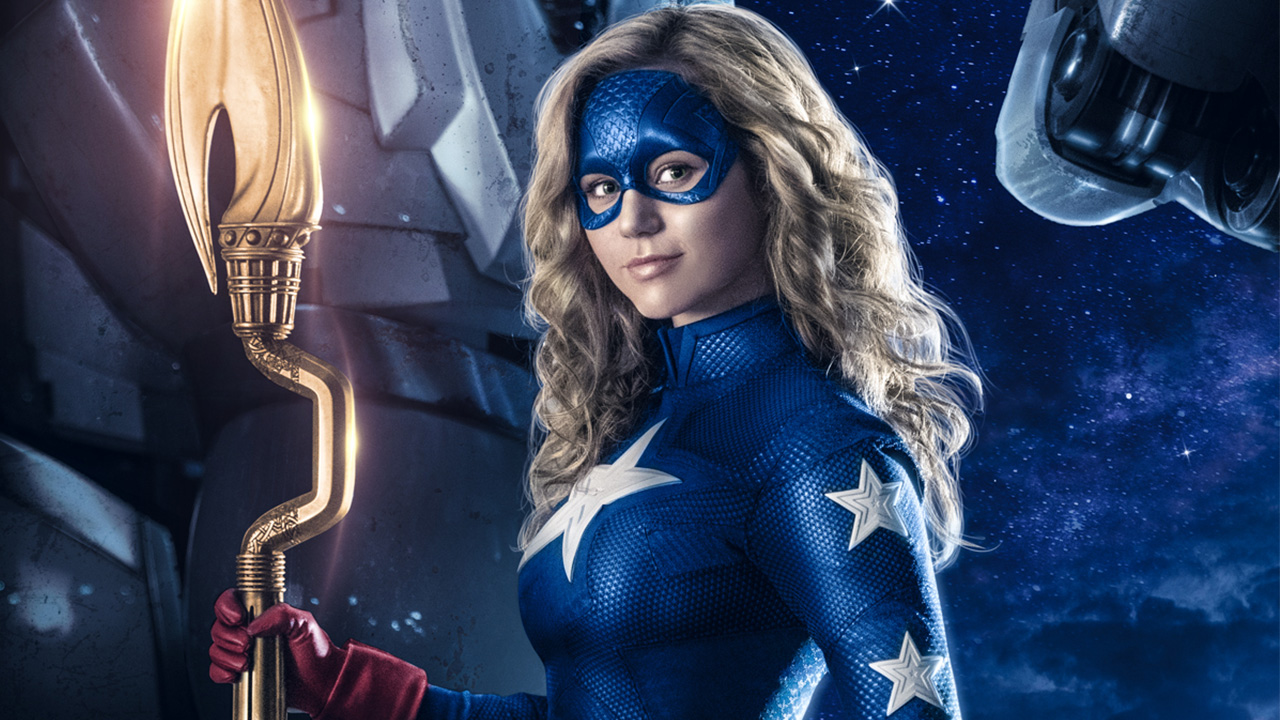 5 Things to Know About Stargirl

Are you ready to meet DC Universe’s next live-action star? Last night viewers got an early look at Brec Bassinger’s Stargirl in the final act of television’s Crisis on Infinite Earths crossover, and it’s made fans more excited than ever. In 1999, Geoff Johns created Courtney Whitmore as a tribute to his late sister, and Stargirl has since gone on to become one of the DC Universe’s most beloved characters. To know her is to love her. So let's get to know her… 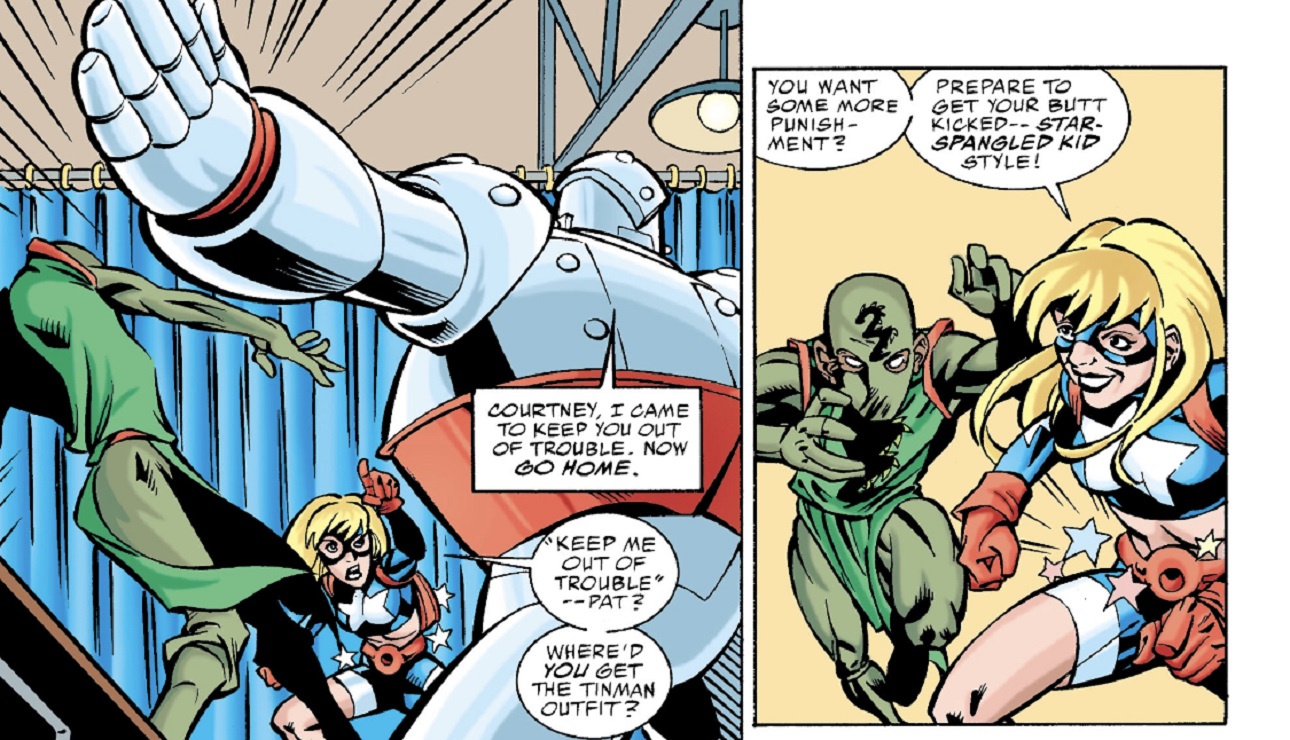 You remember what it’s like to be a teenager. Sometimes you try out different personas to see what fits. When Courtney Whitmore first suited up in Stars and S.T.R.I.P.E. #1 she decided to call herself the Star-Spangled Kid. Initially Courtney had worn the outfit to annoy her stepdad (who was once the superhero Stripesy) but when her school dance was invaded by criminals she went into action and a new hero was born. To everyone’s surprise, Courtney excelled at superheroics. She even caught the attention of Jack Knight, who passed on his Cosmic Staff to Courtney when he retired the Starman identity. By 2003’s JSA: All Stars #4 Courtney decided that she had outgrown her old codename, and decided to honor the legacy of heroes who inspired her by taking on the name Stargirl! Some teenagers change their profile pictures or usernames on a weekly basis, but Courtney knows a good name when she sees it. Stargirl has remained her moniker to this day.

SHE’S BEEN A PART OF SOME POWERHOUSE TEAMS 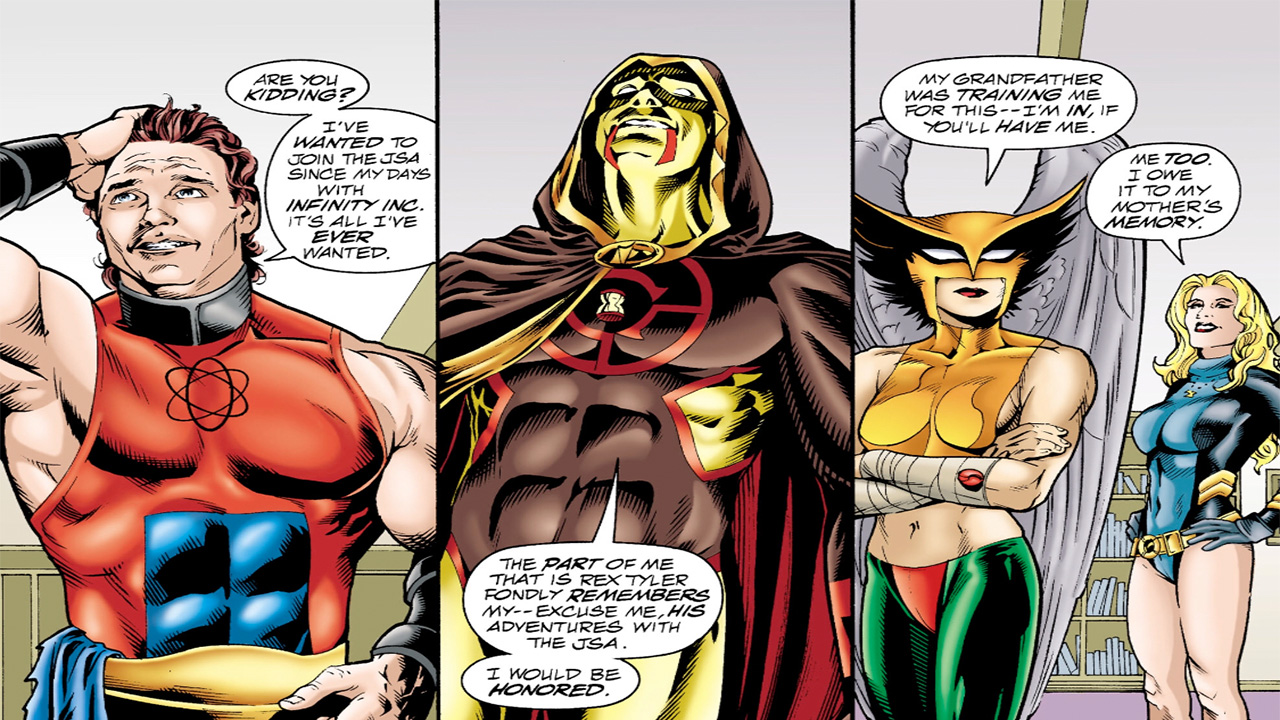 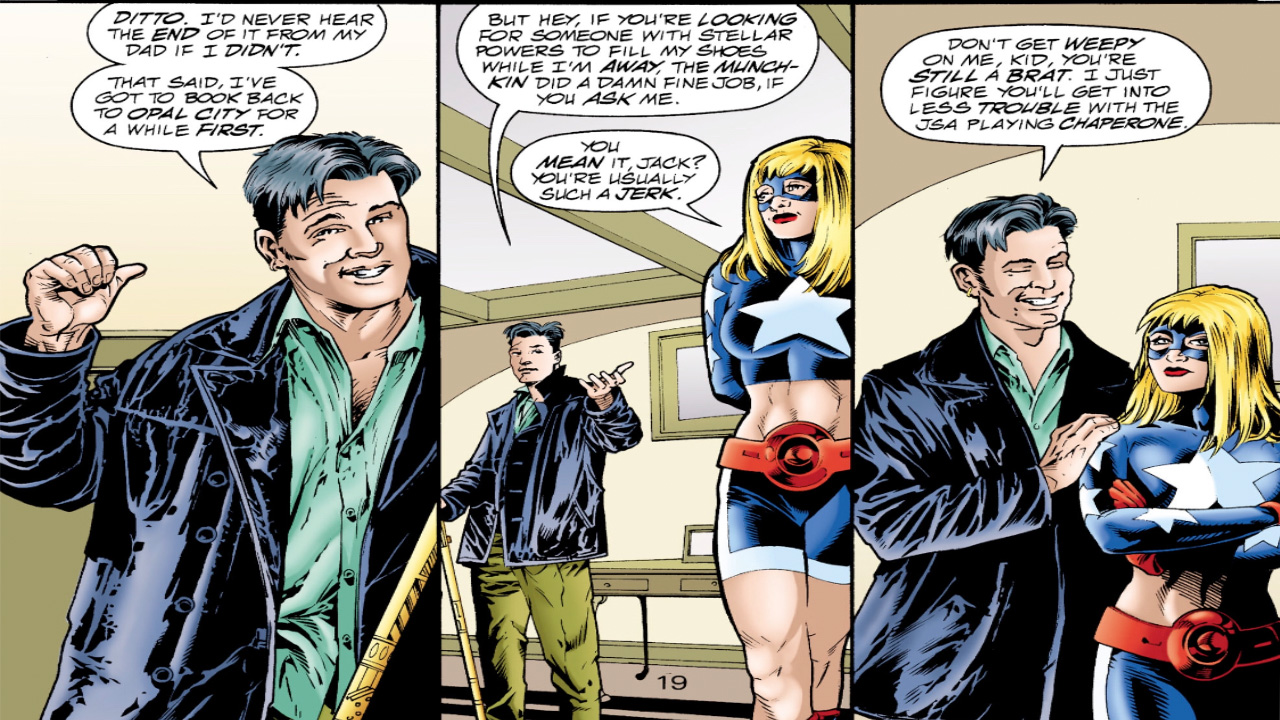 Courtney Whitmore can be described many ways, and shy isn’t one of them. She’s a social butterfly, making friends wherever she goes, and that includes the superhero community. Initially, she fought crime alongside her stepfather Pat Dugan, who piloted a giant battlesuit called S.T.R.I.P.E. Having your stepdad follow you around on patrol can cramp your style, but it actually helped the two of them bond. Jack Knight vouched for Courtney and encouraged the Justice Society to let her join the group in 1999’s JSA #4. Stargirl quickly bonded with the group, and found herself a mentor in Power Girl. Stargirl also made the cut for the Justice League in 2013’s Justice League of America #2. Most teen heroes would be lucky to get an internship with the Legionnaires or the Teen Titans, but Stargirl has an all-access pass to some of the biggest teams in the DC Universe! 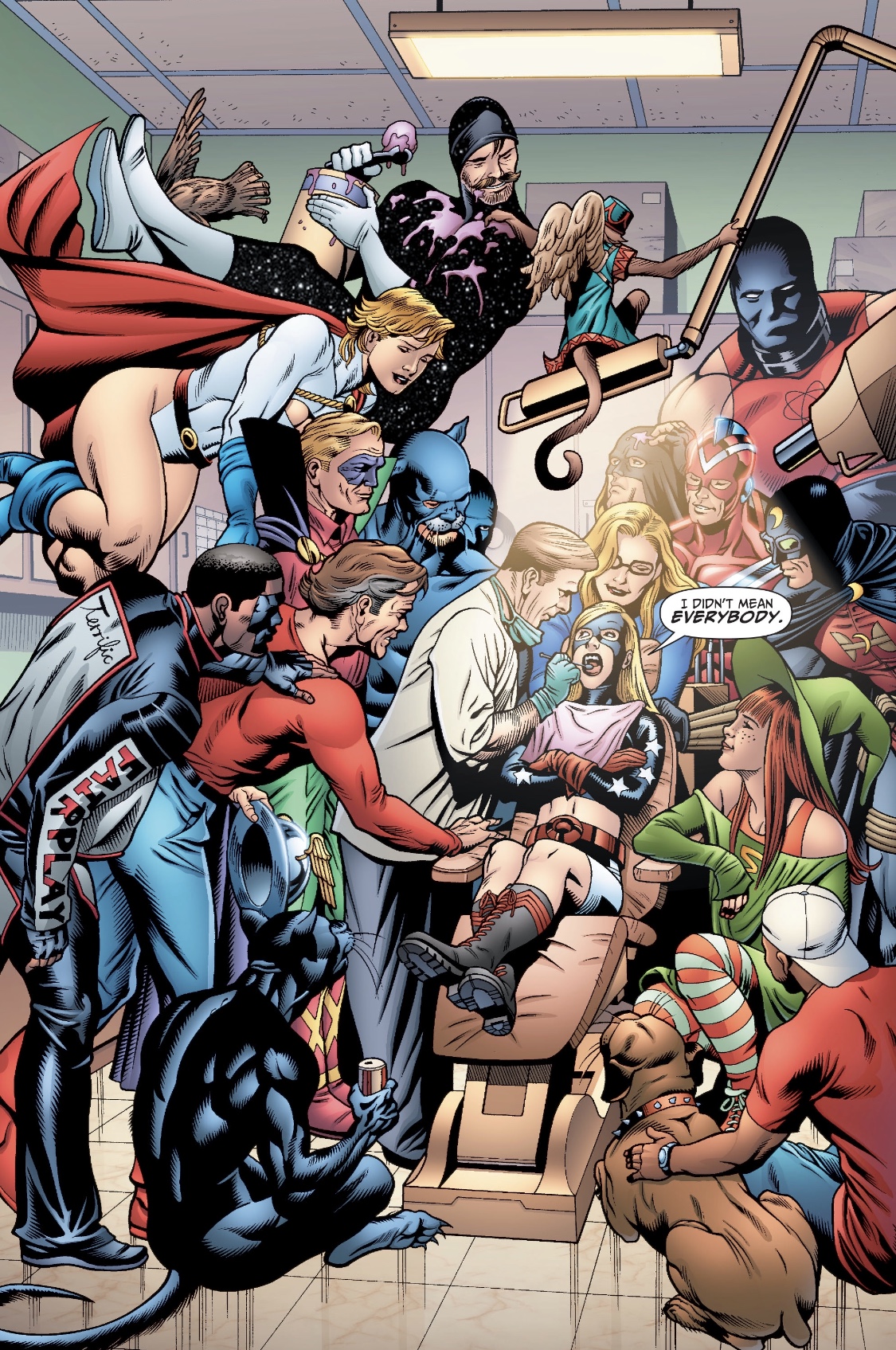 Being a superhero is hard enough, but don’t forget Courtney is also a teenager, which comes with its own set of problems. Courtney deals with many of the trials and tribulations of adolescence, including braces. How many superheroes can you think of that have a mouth full of braces? Courtney was mortified to receive hers in Stars and S.T.R.I.P.E. #2, and tried to hide her new smile from her Blue Valley High classmates. It’s so embarrassing, it just makes you want to die! Most of Courtney’s friends and superhero allies thought her smile was still beautiful, but she wasn’t having it. She looked forward to the day she could get her braces off, and the entire Justice Society wanted to be there to support her. Naturally Stargirl was mortified when they all accompanied her to the orthodontist appointment in 2009’s Justice Society of America #26. How embarrassing! Unfortunately Courtney was told that her braces would have to remain for another year. Bummer! Don’t worry Stargirl, Halo was also embarrassed by her braces too.

SHE’S BEEN IN ANOTHER DC UNIVERSE SERIES 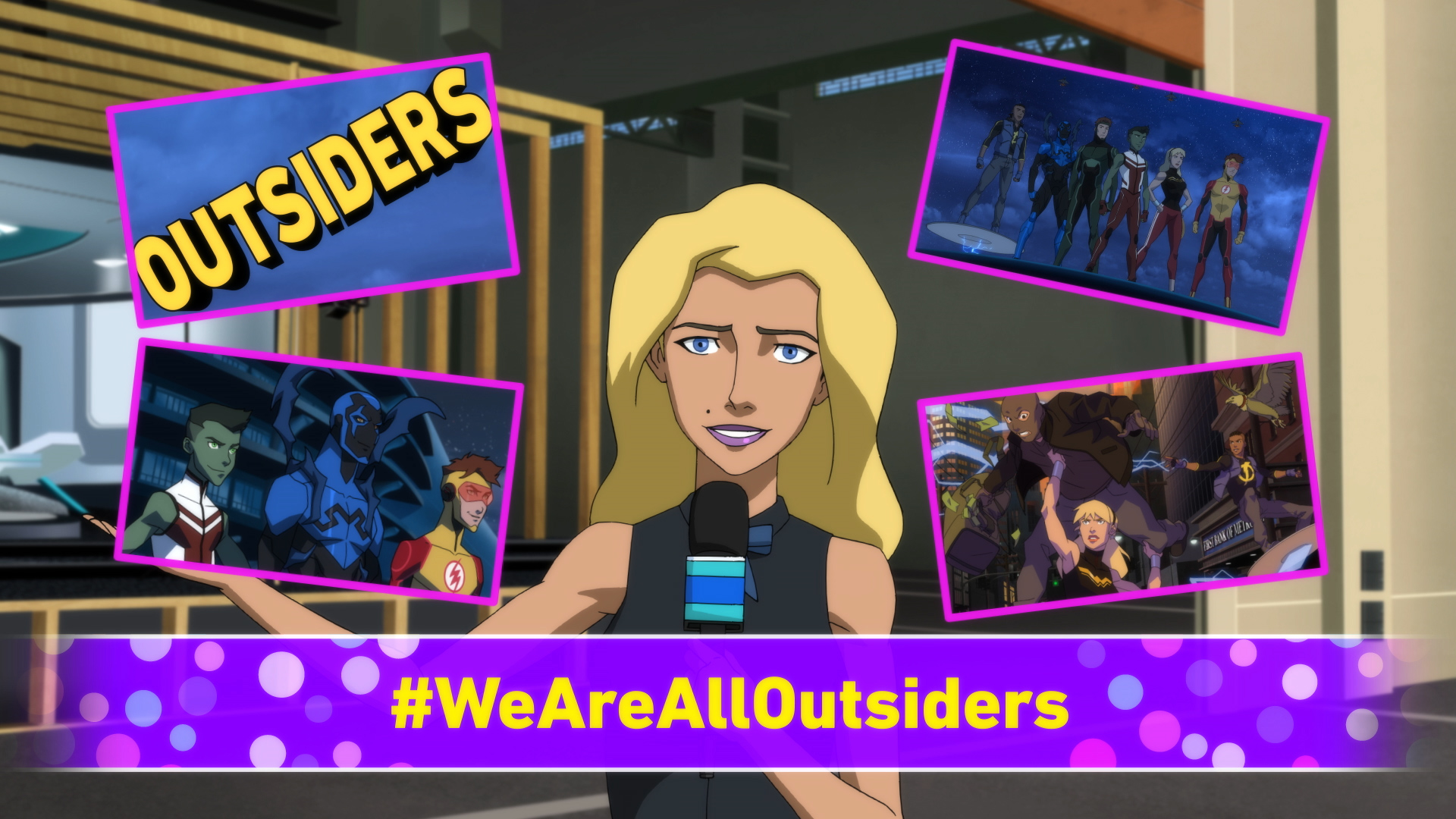 You don’t have to wait for the premiere of Stargirl to catch Courtney Whitmore on DC Universe. Courtney Whitmore can be seen throughout the season in Young Justice: Outsiders, where she is played by DC Daily host Whitney Moore. The Young Justice version of Courtney is a bit older, and hosts her own entertainment show, appropriately titled Stargirl. Although she isn’t a superheroine yet, there’s no telling what fate future seasons hold for her. If you’re hungry for more animated versions of Stargirl, check out the Justice League Unlimited episode “Patriot Act” and the Batman: The Brave and the Bold episode “Cry Freedom Fighters.”

HER UPCOMING SERIES HAS AN ALL-STAR CAST

There are plenty of reasons to be excited for the upcoming Stargirl series, especially after you get a look at their all-star (no pun intended) cast! Luke Wilson will be portraying Courtney’s stepfather Pat Dugan; and yes, he will be piloting S.T.R.I.P.E. Amy Smart will play Courtney's mom Barbara. Lou Ferrigno Jr, son of the legendary Hulk actor, will be bringing Hourman to life. Henry Thomas, best remembered for his role as Elliot in E.T., will be playing Doctor Mid-Nite. Need more? How about Joel McHale as Starman? If you’re a Justice Society fan, you’ll be seeing lots of familiar heroes and villains.

Keep your eyes here on DC Universe for more Stargirl news leading up to her TV premiere. In the meantime, if you want more Courtney, we’d highly recommend you check out Stars and S.T.R.I.P.E. for her heroic debut!