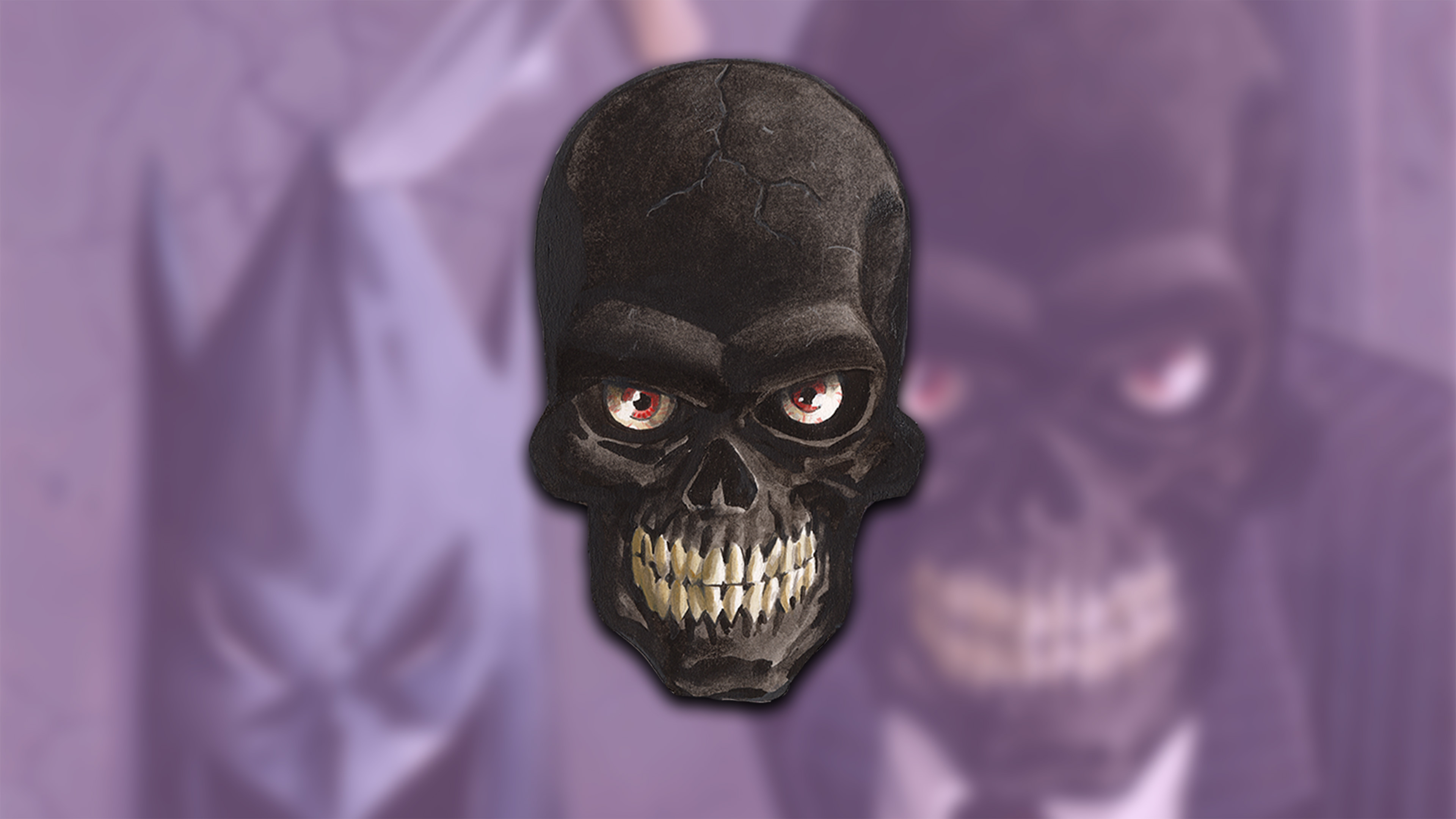 5 Things to Know About BIRDS OF PREY's Black Mask

Are you ready to take on the Black Mask? Gotham’s sadistic crimelord will be making his cinematic debut next week, as he tangles with Harley Quinn and the Birds of Prey. He may not be as well-known as Joker or Penguin, but Black Mask is one of the most violent foes Gotham has ever seen. To help prepare you for his theatrical crime spree, here’s our handy dossier on Black Mask. 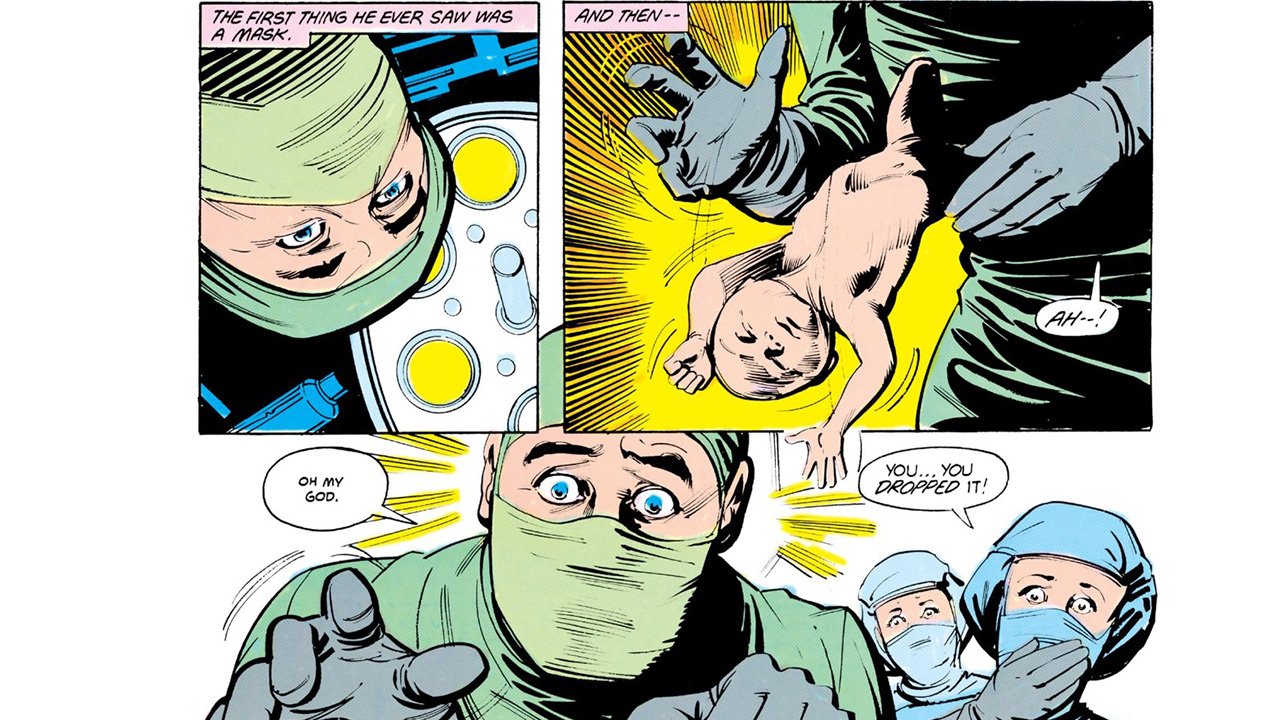 If you think you’ve had a rotten birthday, Roman Sionis has you beat. Decades before he became the criminal mastermind Black Mask, Roman’s life started out on the wrong foot when he was dropped as a baby in the opening pages of Batman #386. Seconds after his birth, one of the attending doctors dropped the future villain to the floor, horrifying everyone else in the delivery room. Sionis had no visible injuries from the birth trauma, but people thought there was something strange in his eyes afterwards. His parents considered suing the doctor, but decided to ignore the entire affair since the affluent Sionis couple didn’t want any negative publicity. Happy birthday Black Mask, sorry your parents are jerks. 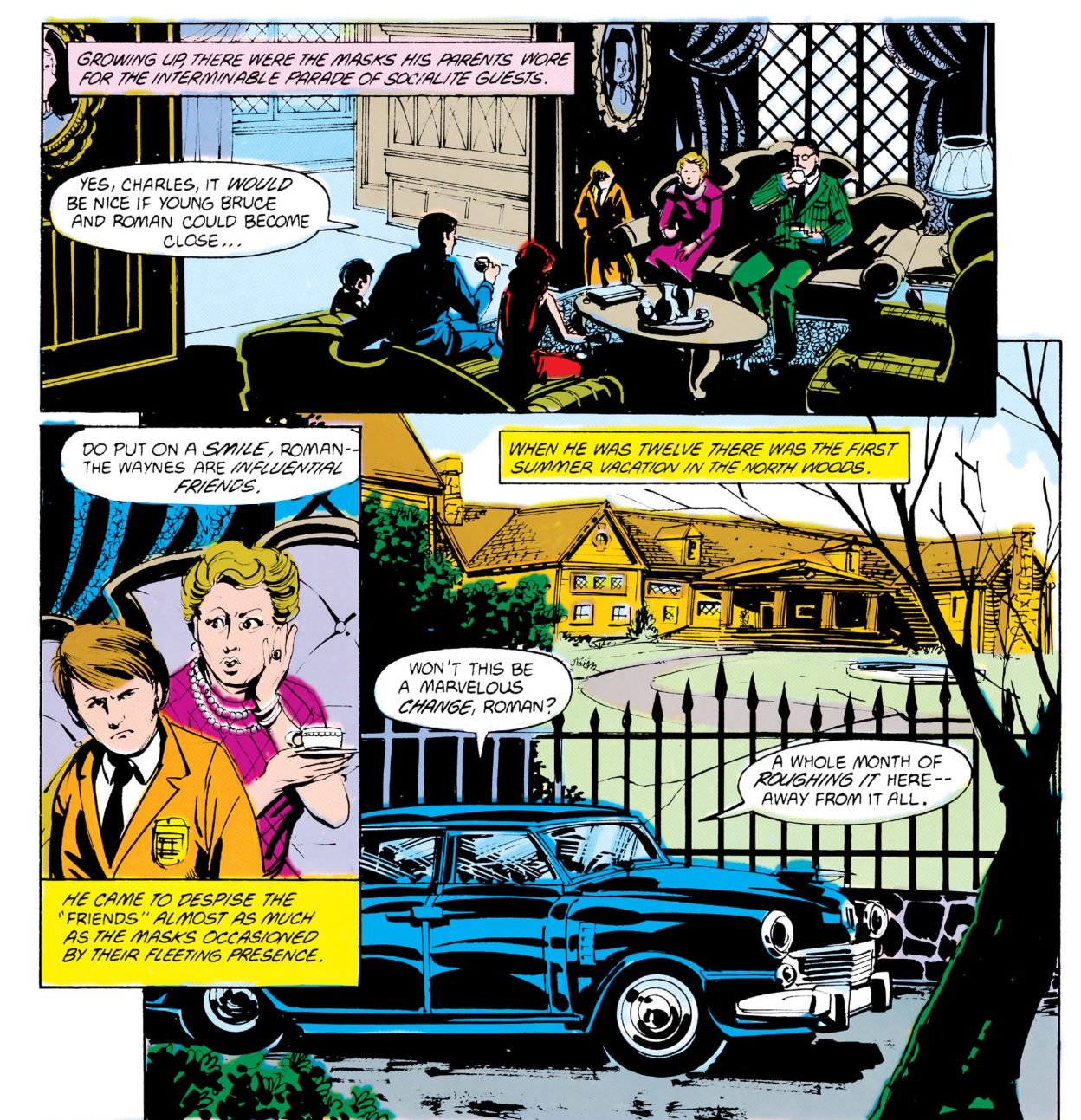 In many ways Roman Sionis can be considered a dark mirror version of Bruce Wayne. Both boys were born around the same time, and grew up in similar social circles. Batman #386 details how the Wayne family use to have social visits to the Sionis mansion, but young Roman resented faking pleasantries. Both boys had traumatic rodent encounters during the childhood, but while Bruce was scared by a bat, Roman was attacked by a raccoon. Both Bruce and Roman lost their parents, but while Wayne’s parents were the victims of a robbery, the Sionis couple lost their lives in a fire. It turns out that Roman had started the fire because his parents tried to end one of his romantic relationships. Bruce and Roman are both business moguls, with Wayne running Wayne Enterprise, while Sionis lead a makeup empire called Janus Cosmetics. So many similarities, and that’s not even getting into their nightlife…

HE WEARS HIS FATHER’S COFFIN 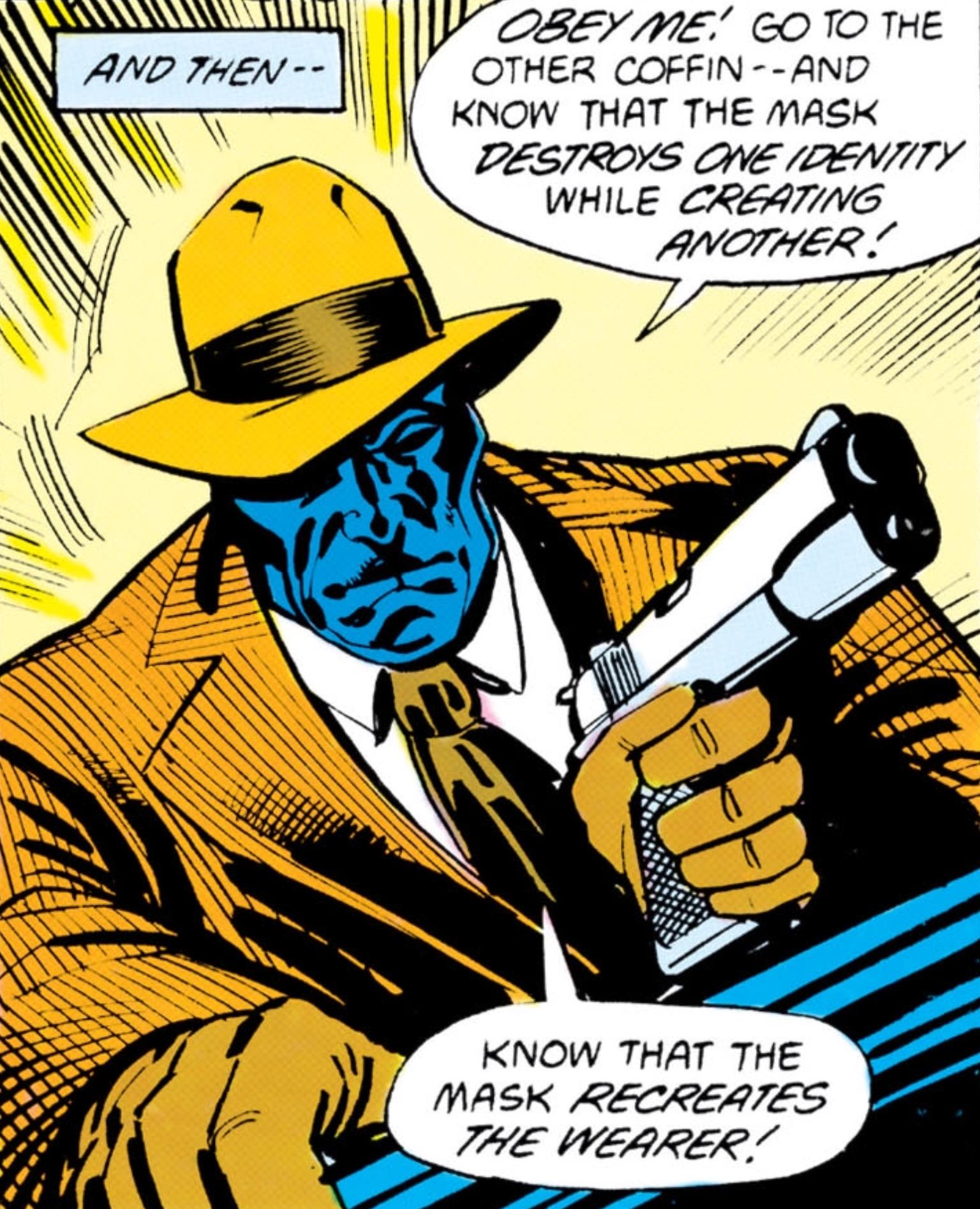 Remember when we said that Roman had a lot in common with Bruce Wayne? One thing he didn’t have was a good sense of business. After his parent’s death, Roman made bad business decisions and ran Janus Cosmetics to the ground. The company had no choice but to accept a buyout from Bruce Wayne, which humiliated and enraged Roman. In Batman #386 he went to his father’s grave and decided to begin a new life as a crimelord, and get revenge on everyone who humiliated him. Using pieces of his father’s coffin, Roman fashioned a false face for himself and became the criminal Black Mask. People have accused Batman of having daddy issues, but we’ve never caught him wearing a piece of his father’s coffin. Black Mask began a crime spree with a gang he christened the False Face Society, but things seldomly go well for Roman. In Batman #387, Black Mask was caught in a fire, and by the time the Dark Knight rescued his adversary, the fire had burned the mask onto his skin. When Roman was unmasked, Batman was horrified to learn his face was now disfigured, giving the criminal a permanent black mask.

HE HAS A SICK STYLE OF TORTURE 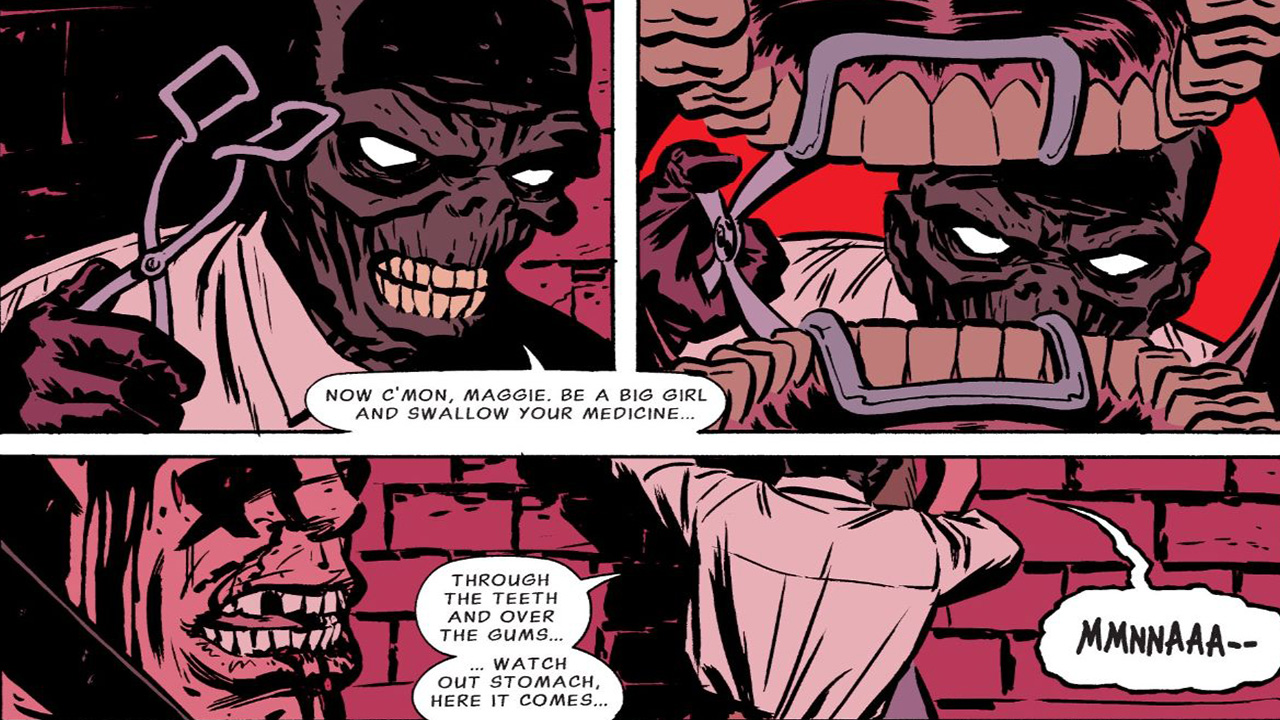 The cover of Batman #386 promises that Black Mask is “crazier than the Joker” and “deadlier than Ra’s Al Ghul.” It may seem like hyperbole to compare Roman to two of Batman’s most dangerous villains, but if you’ve read Ed Brubaker’s Catwoman run, you would know how true that statement is. Selina was messing up Black Mask’s criminal operation, so the villain kidnapped Selina’s sister Maggie and tortured her. We’re talking about the type of torture that would give Hannibal Lector pause.  In 2003’s Catwoman #15 Black Mask tortured Maggie’s husband Simon in front of her until he died. Afterwards he removed pieces of Brian’s body, including his eyeballs, and forced Maggie to swallow them. The entire ordeal drove Maggie insane, and we can’t say we blame her. 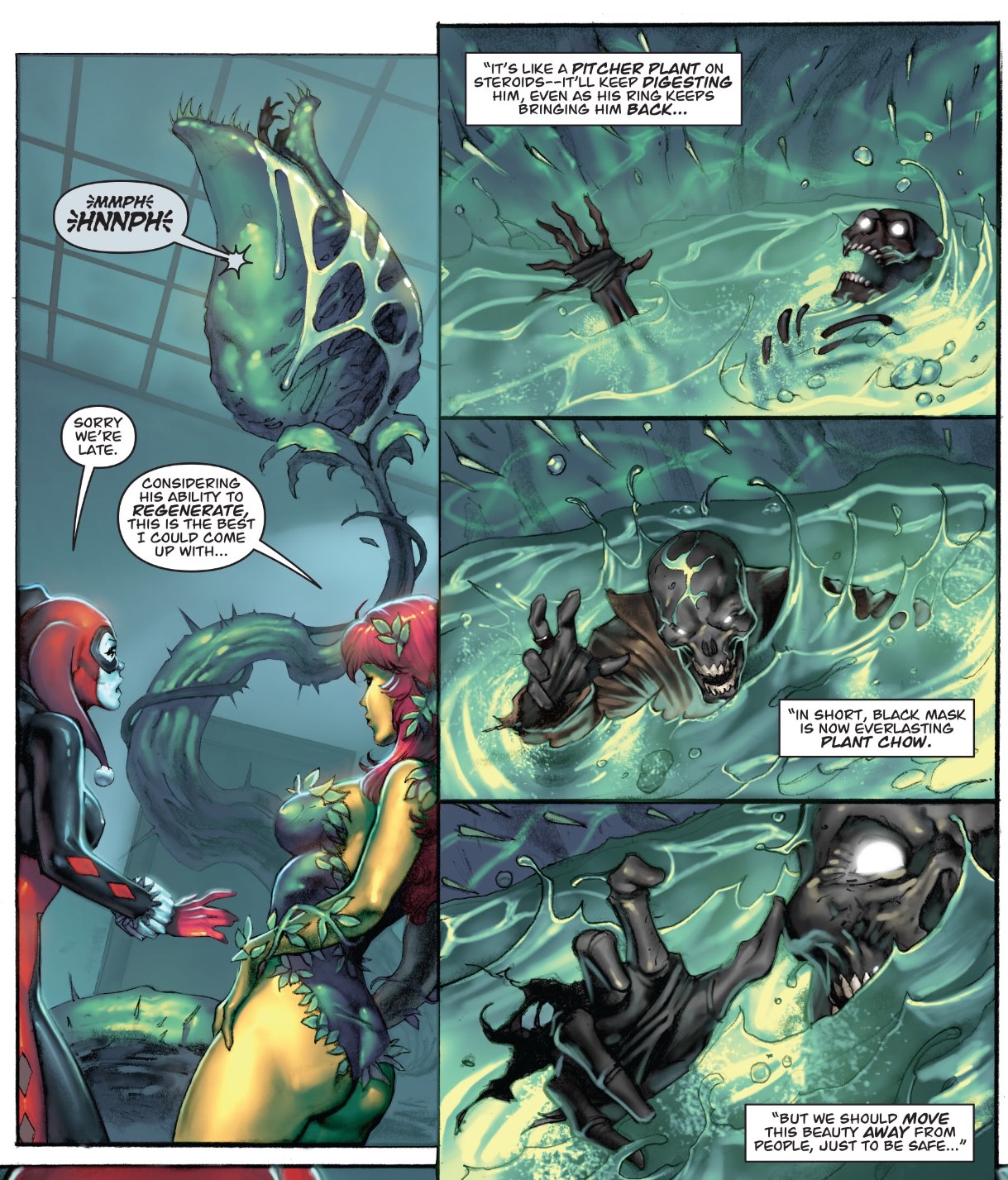 Black Mask is surprisingly resilient, and that might have something to do with the fact that he was dropped on the head as a baby. He’s died three times, and is still going strong. In 2003’s Catwoman #16 Selina confronted Black Mask in a high rise penthouse. Catwoman was enraged about the way her sister had been tortured the previous issue, and when Black Mask threatened to kill Selina’s friend Holly Robinson, all bets were off. During the fight, Catwoman let Black Mask fall off the penthouse balcony, seemingly to his death. Unlike his Birds of Prey actor Ewan McGregor, Black Mask did not have the high ground and he suffered for it. It was later revealed that Black Mask survived the fall, but Selina was not going to make the same mistake twice. In 2006’s Catwoman #52 Selina held Black Mask at gunpoint. The smug Sionis said he knew Catwoman didn’t have the guts to pull the trigger, but seconds later Selina killed the crimelord with a direct headshot. That’s a lot harder to come back from than a fall right? Black Mask had another resurrection in him when his corpse was reanimated by a Black Lantern ring for the Blackest Night event. Black Mask haunted Selina in 2010’s Catwoman #83 until he was trapped inside of one of Ivy’s giant pitcher plants. The stomach acids dissolved Roman’s body as fast as the Black Lantern ring caused it to regenerate, trapping the criminal in an endless loop of torture. Maggie Kyle would’ve appreciated that. The reality altering events of Flashpoint have caused Ramon to be resurrected again, but a fourth death is always in the cards.

If you can’t wait to see Black Mask take on the Birds of Prey in theaters next week, here are some more ways to watch Roman Sionis in action.

* The Batman episode “The Breakout”

* Batman: The Brave and the Bold episode “Shadow of the Bat”

Are you looking forward to seeing Black Mask take on Harley Quinn and the Birds of Prey? Let us know in our Community!