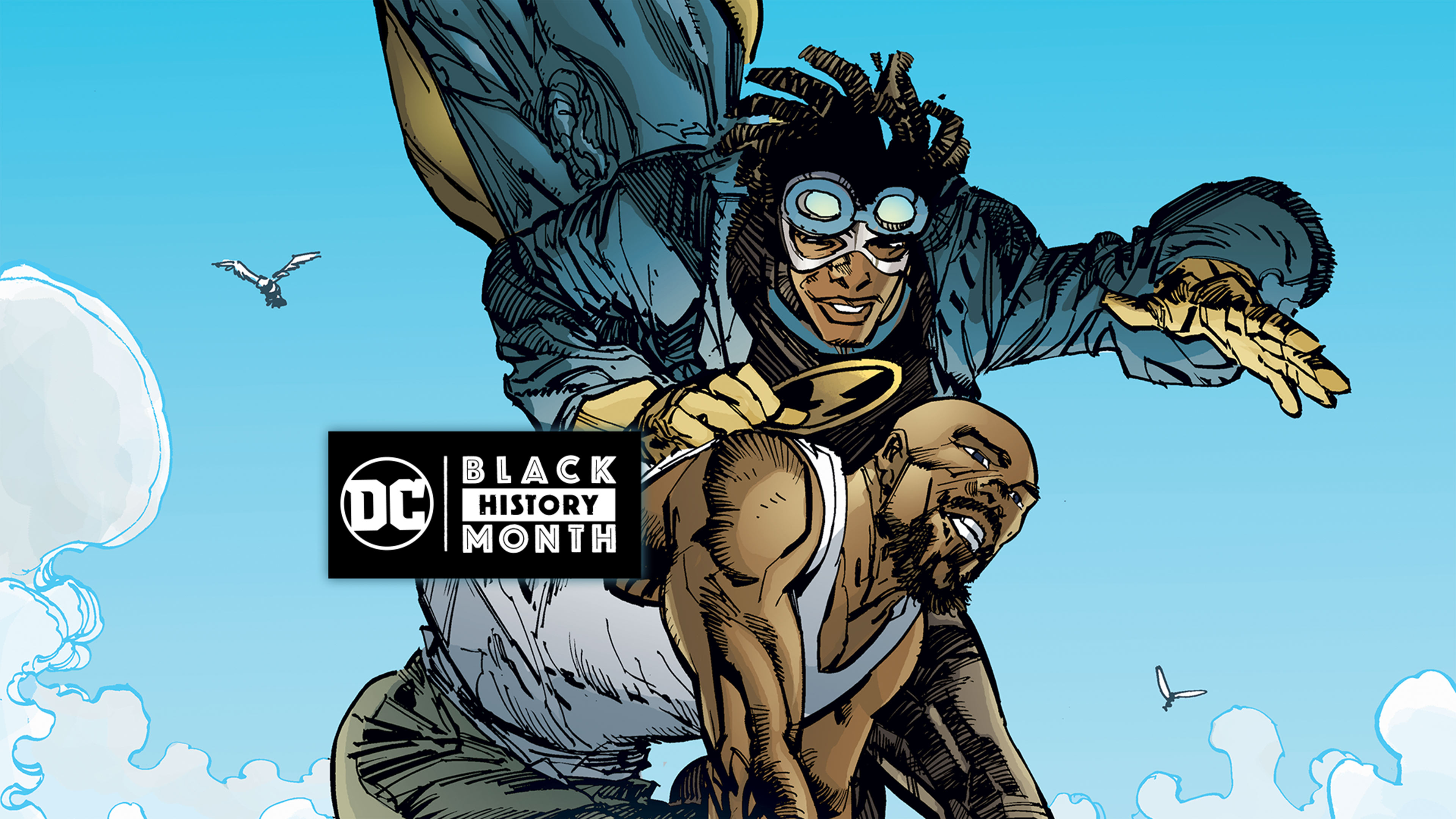 5 Shocking Static Facts You Should Know

Static ranks as the most popular Milestone Comics characters. Originally conceived to fill the slot of a wise-cracking teen hero, creators Dwayne McDuffie, Denys Cowan, Derek Dingle and Robert Washington III formed a more human world within the wild and cosmic universe of Dakota. It was that special blend of comedy and drama that brought the character to the small screen in animated form, and through that television series Static’s appearances increased to where he’s now an icon of black superheroes. But there’s more to the turbo-charged teen than just the facts of his origin story. Let’s go through a list of five things to average fan might not know about Static. 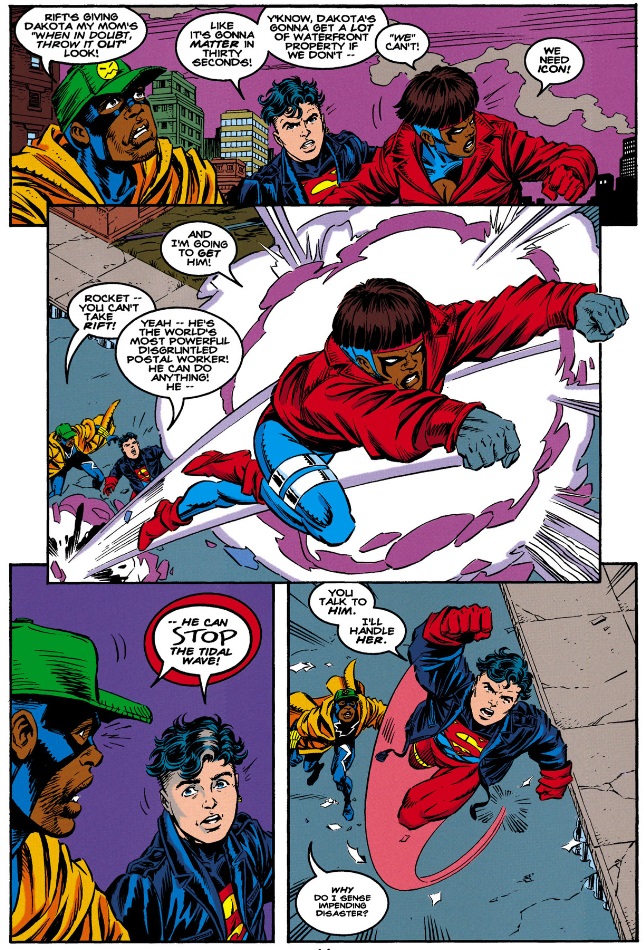 Although Milestone Comics was published and distributed through DC Comics in 1993, its characters existed in another universe. Superman, Batman and the rest were as fictional to Virgil Hawkins and his contemporaries and they are to us. This was made abundantly clear in the 1994 crossover Worlds Collide when Static, Icon and Rocket, Hardware and the Blood Syndicate crossed over with Superman, Superboy and Steel. The former heroes greeted the latter with jokes and derision, asking where Lois Lane and Krypto the Superdog were, bewildering the Super-Team. This was also the case in the initial seasons of the animated series. “Frozen Out” had Static cheerfully referring to Daisy as “Lois” when he rescued her from falling debris. Of course, by the third season when Static would meet Superman, the worlds were subsumed as one within the DC Universe. It wouldn’t be until Dwayne McDuffie’s run of Justice League of America in 2008 when the Milestone and DC Heroes operated in the same universe, with only Icon and Superman aware of the discrepancies.

2. His Friends and Family Changed Going From Comics to TV 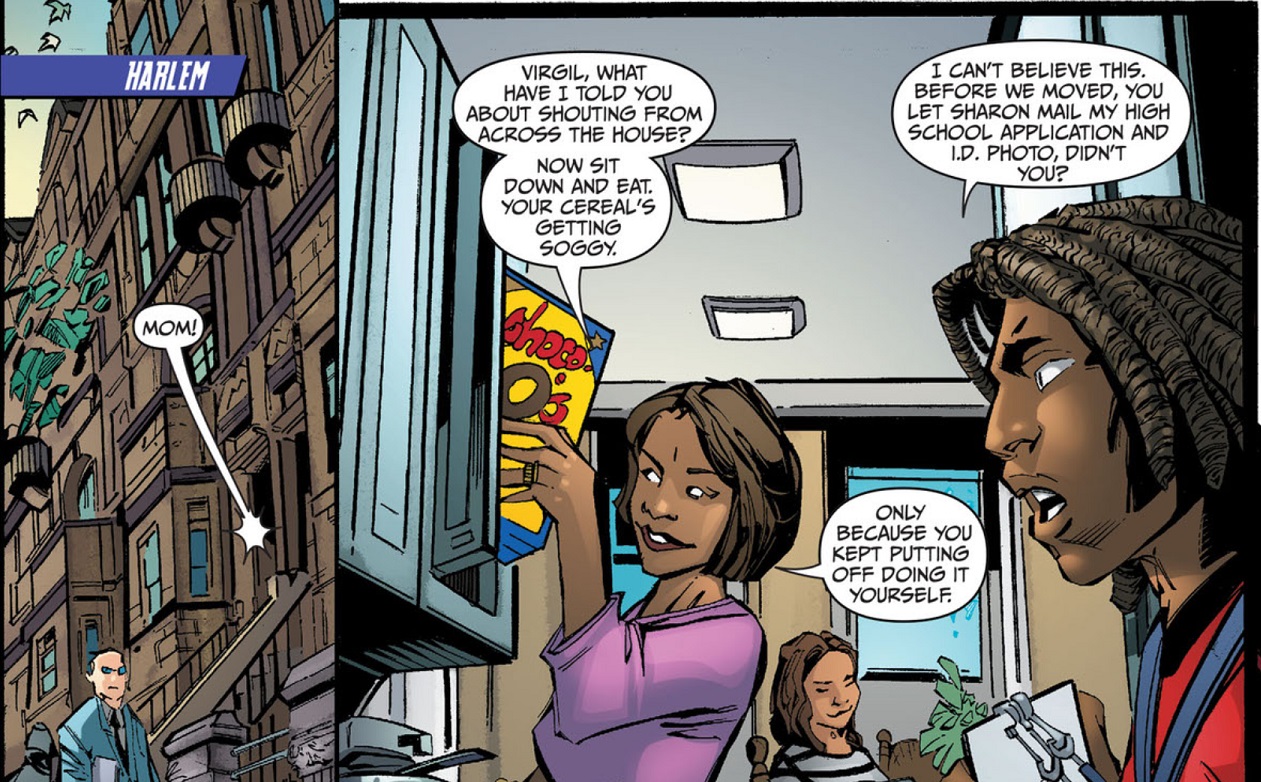 In adapting Static for animation, small changes were made during the transition. In the Milestone Comic series, the only person who knew his secret identity was his friend and crush Frieda Goren. Discovering his secret after a failed attempt to rescue her from the villain Hotstreak in Static #1, Frieda was his sole confidant, helping him with excuses to his friends and patching him up whenever he returned injured from a fight. While the character was included in the animated series – voiced by Danica McKeller who would later voice Ms. Martian in Young Justice – the role of Virgil’s best friend was occupied by Richie Folely, who was a modified version of another character from Virgil’s comic book supporting cast – Rick Stone.

The most notable change to Virgil’s cast was with his family. In the comics, he was the youngest child of Robert and Jean Hawkins, and younger brother to Sharon. In the TV series, Jean had been killed before the events of the first episode due to gun violence. Although McDuffie objected to this change as his intentions with Static was to show a young black hero with a nuclear family, he did appreciate the storytelling opportunities the change afforded the series, such as in the season three episode “Flashback.”

3. Static Can Do More Than Just Zap You 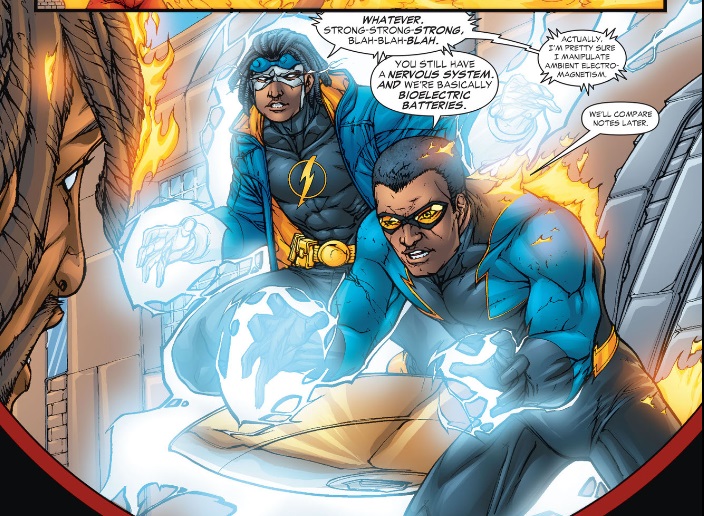 Contrary to much belief from the fandom, Static’s electromagnetic abilities have a much wider breadth than just the power to shock and electrocute people. Creator Dwayne McDuffie had a master’s degree in physics, and wanted Virgil’s geeky personality to come from a place of real intelligence. As such, Virgil is often using his abilities in a variety of unexpected ways, even surprising himself with each new discovery. Much of his powers are used through his electromagnetism, which he employs to levitate himself across town. When he was first starting out, Virgil would fly on metal trash cans and sewer covers, but eventually he developed his Static Saucer – an aluminum disk he used to travel at a moment’s notice. His powers also enable him to control any electronic machinery or technology, and even increase his healing factor. An example of this was in the new 52, when his arm was sliced off at the end of Static #1. In issue #2, it instantly reattached itself, leaving only a minor bruise. This discovery freaked Virgil out, as the new limits he was learning about himself were happening at too fast a rate for him to handle.

4. Static’s Villains Have Become Part of the DCU 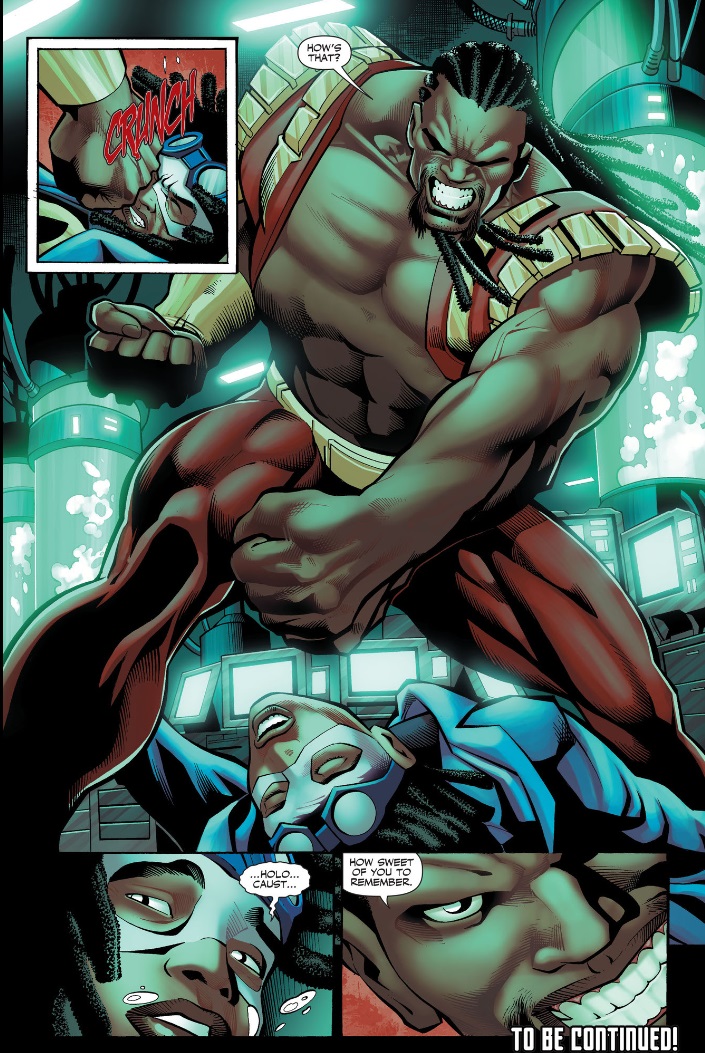 In the animated series, a number of new villains were created to round out Virgil’s rogues gallery. Ebon, Talon, Shiv, Onyx and Kangor were all original creations for the series. However, there were still several characters from Static’s series that were brought along for adaptation. Hotstreak, the first villain Virgil fought in his comic series, was the first villain he battled in his animated show as well. Edwin Alva, the main antagonist of the hero Hardware – referenced in the episode “Gear” – was included to bedevil Static as a criminal businessman. Other characters like Puff, Brickhouse and Aquamaria – some of which were members of the Blood Syndicate – were also carried over from the comics.

However, one of Static’s most prominent antagonists, and a chief member of the Blood Syndicate, was Holocaust. A Bang Baby with a powerful control over fire and pyrokinetic abilities, the two first crossed paths in Static #4. When Static was brought over to the DC Universe and joined the Teen Titans, he returned home to Dakota after he’d been kidnapped for months by the Terror Titans. There, he ran into Holocaust again, who tried to have Virgil join his side. 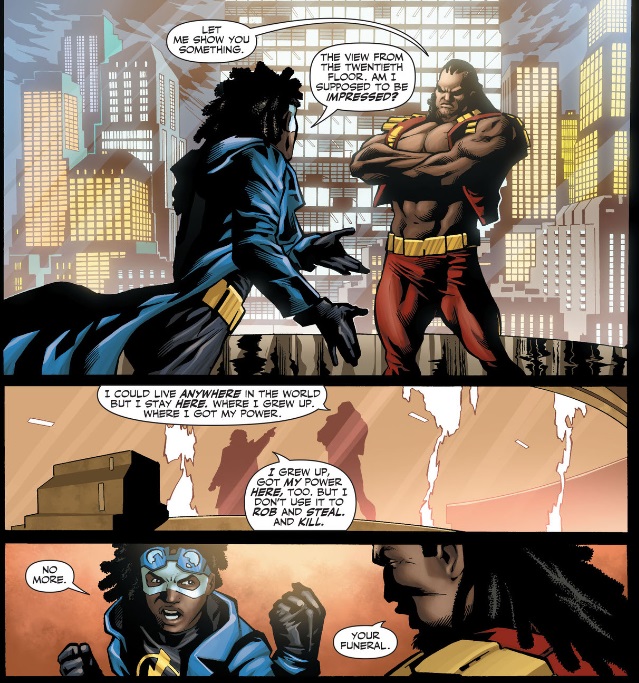 Virgil refused, but Holocaust was too powerful to take down alone. Fortunately, the Titans arrived to back him up, and with the combined help of Superboy, Kid Flash and the others, they literally put Holocaust into the ground for good. Though never represented in the Static Shock animated series, Holocaust did show up in season three of Young Justice. 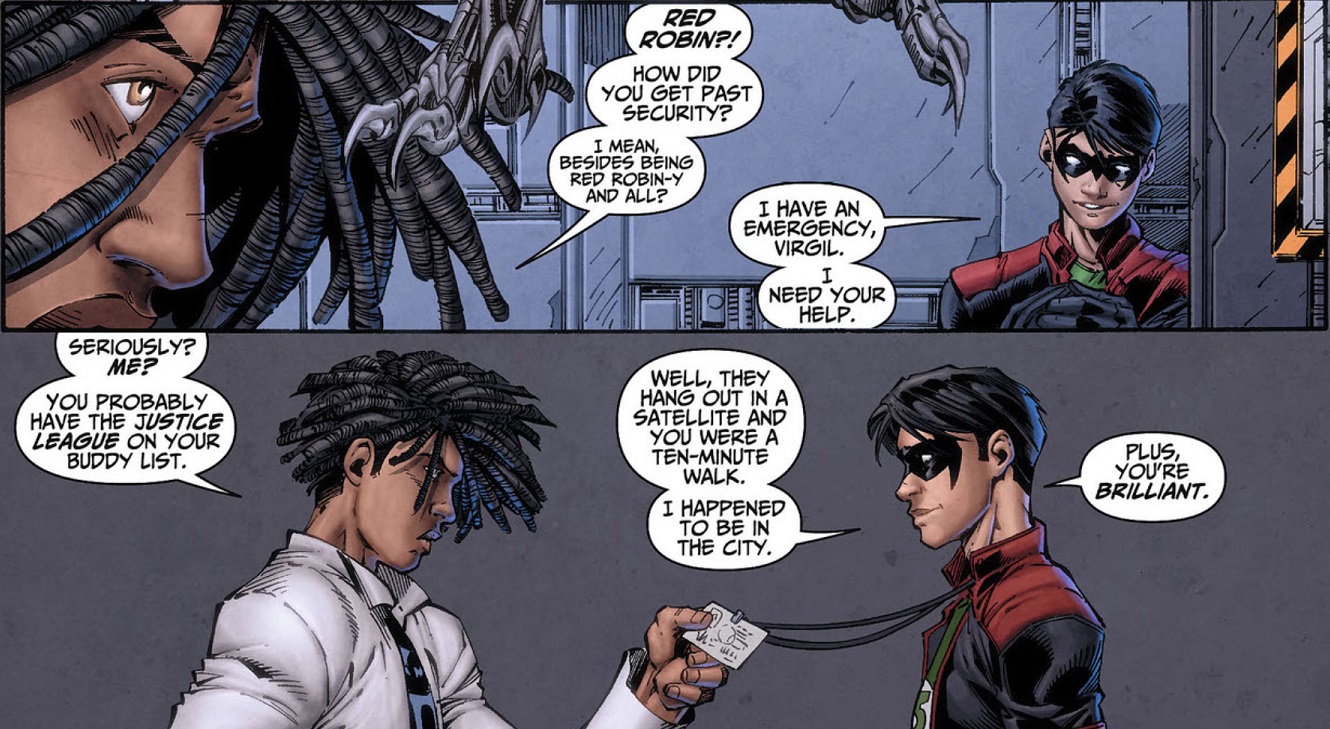 Static’s interaction with the Teen Titans – particularly Robin – has a storied history. As he was originally separate from the DCU, Static only first met Batman and Robin in the season 2 premiere episode “The Big Leagues.” While Batman was stern but eventually respectful, he struck up an easy friendship with Robin. This carried over into the episode “Future Shock” but it was in “Hard as Nails” where Static’s future with the Teen Titans would be obliquely foreshadowed, where Batman surmised that Virgil would join up with them someday. This prediction came true in Terror Titans where a kidnapped Virgil was forced by The Clock King to compete in the Dark Side Club, a Gladiator-like deathmatch between metahumans. Too powerful to be controlled, Virgil was under heavy sedation until the Titans rescued him. He remained a member until he mysteriously lost his powers during a rescue mission to recover Raven. Aiming to return to Dakota for good, he’d been persuaded by Cyborg to stay close with the team, as Dakota would be better off with Static as a fully powered hero. 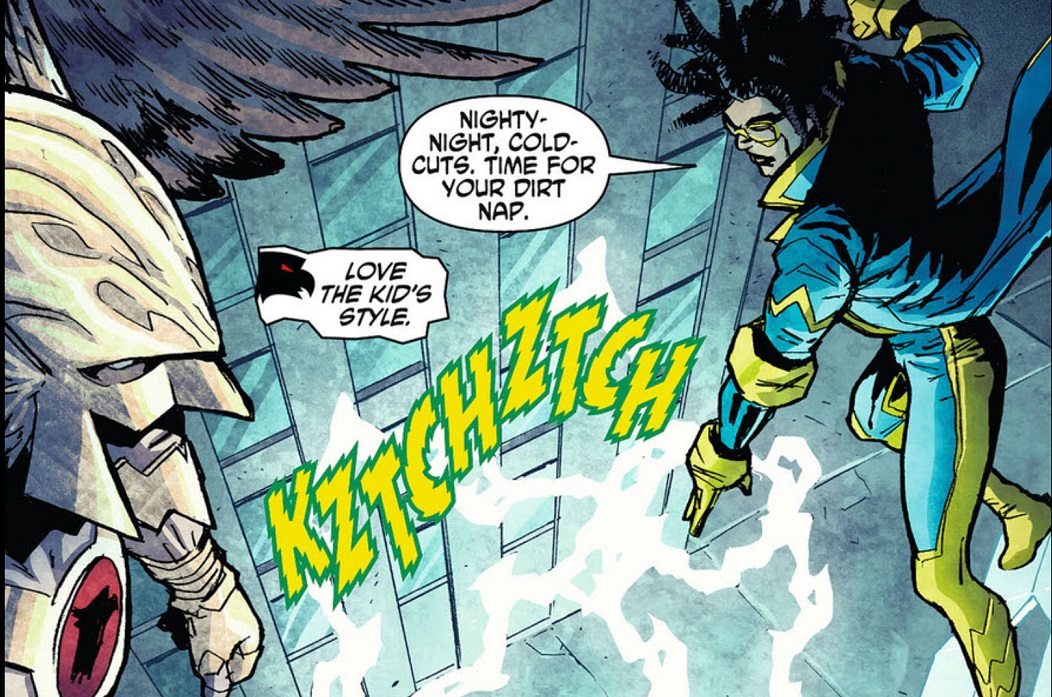 We next see Virgil in the new 52, having moved to New York with his powers fully restored. Armed with a new laboratory headquarters and a new costume courtesy of Hardware, Virgil is approached by Tim Drake to help fix Kid Flash, whose speed powers were affecting his health. He also assisted Hawkman in battling the Shadow Thief. Whether Virgil will return to the Titans or remember his former membership with them before the new 52 has yet to be seen.

What are some of your favorite Static stories? Talk about them in our Community!