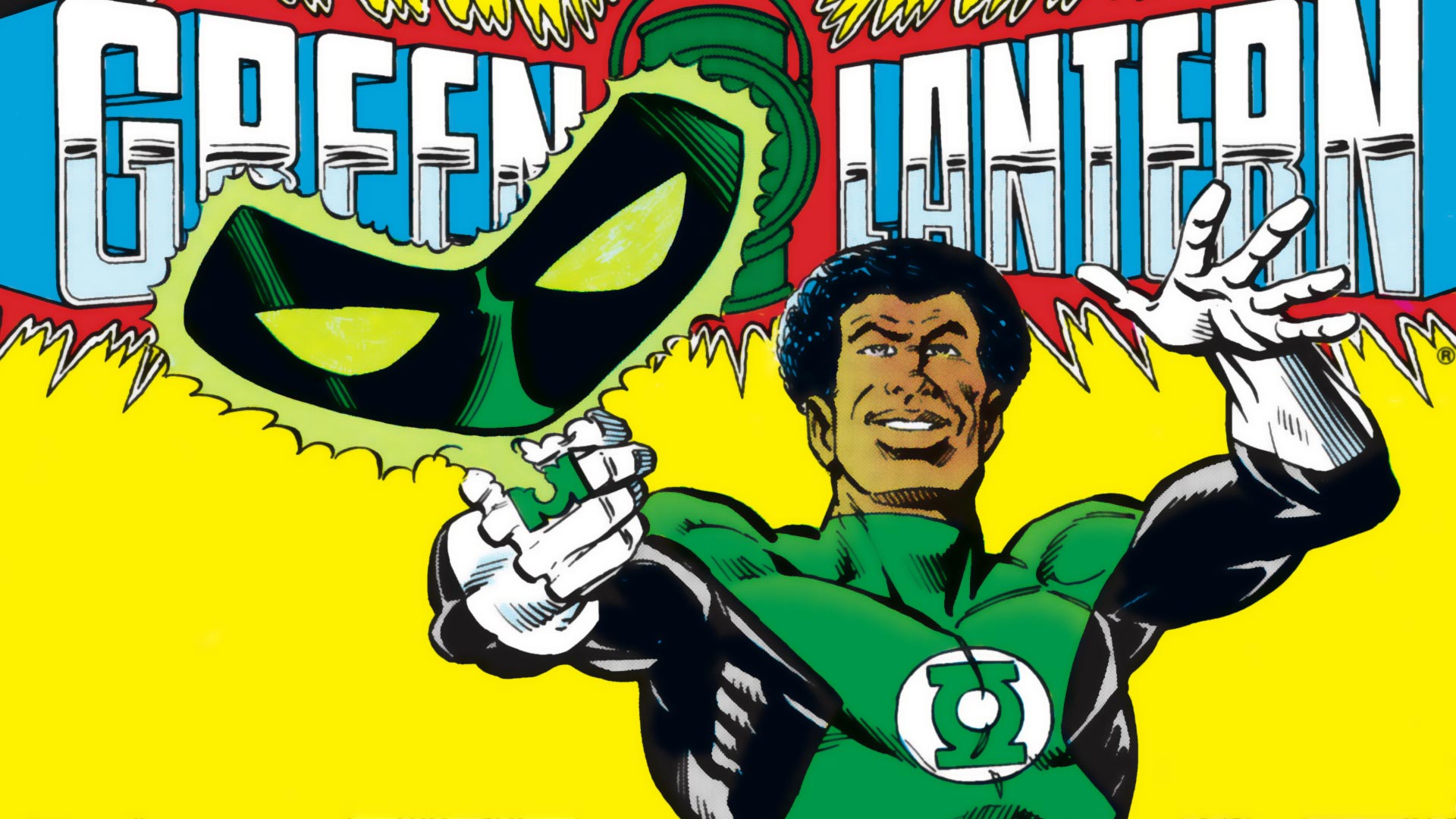 Secret identities are a classic staple of superhero comics. Many heroes don’t care for the spotlight, but only seek to make a difference, not become celebrities. They take great pains to guard their private life to protect their lives and the lives of their loved ones. It’s a wonder then why the following examples are so embarrassing. These five instances of blown secret identities are so ignominious, they’re often not even talked about in subsequent stories. But we never forget! Witness these ridiculous moments of superhero stupidity and consider how even the most famous of heroes can be really sloppy when it comes to their greatest secret.

1. TALKING IN YOUR SLEEP 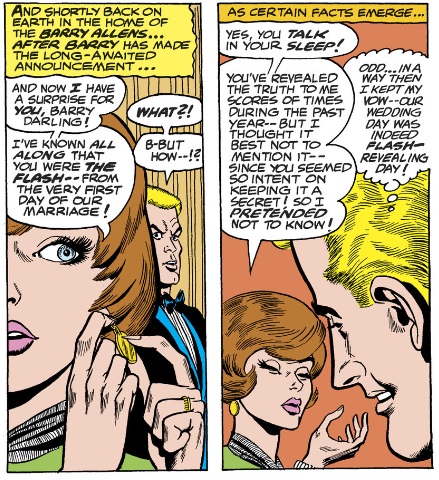 In the pages of The Flash, a newlywed Barry Allen made a promise to reveal his double identity to his wife Iris on their wedding anniversary. Barry had the example of the Flash of Earth-2, Jay Garrick to look to. Jay had retired, settled down and married his college sweetheart Joan. But not even the sanctity of marriage convinced Barry that he could trust the one person closest to him with the knowledge of his double life. Finally, in Flash #174, after battling some of his most dangerous foes – Mirror Master, Heatwave, Captains Cold and Boomerang and the Pied Piper – Barry defeated them in time to square his 11:00 appointment with Iris for his confession. As luck would have it, none of the secrecy was necessary. Iris revealed that she’d known who he was for a whole year, on account of his late-night sleep talking. Instead of being furious with him, she good-naturedly decided to keep silent until he told her himself. It’s a good thing Barry married a woman so indulgent in his scarlet shenanigans, as any other person who learned that their significant other was the local superhero would be out the door faster than the Flash himself!

2. LEAVING YOUR COSTUME IN YOUR CLOSET 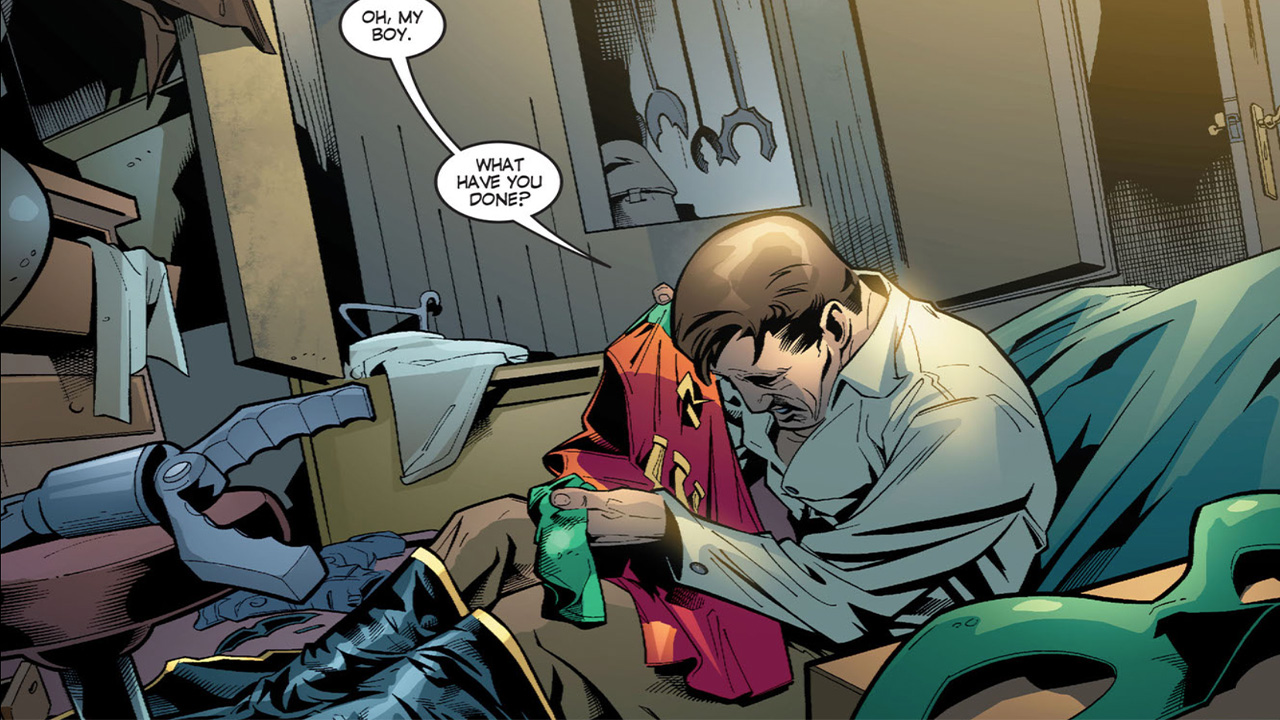 For years, what set Tim Drake apart from the other boys who wore the costume of Robin was that he wasn’t an orphan. He first met Bruce Wayne and Dick Grayson when his parents were away travelling. Eventually his mother was murdered by the Obeah Man, but his father Jack re-married and Tim would have to regularly worry about his secret being discovered whenever he was out of the house. Stories like Robin III: Cry of the Huntress and No Man’s Land pushed tensions between him and his dad, who was always in the dark about Tim’s whereabouts and secrets.

In Robin #124, Jack Drake goes to Tim’s school to thank the football coach for giving Tim a tryout session for the team but discovers that Tim had lied and never tried out for football. After years of secrecy and lies, this was the straw that broke Jack’s back. He rushed home, searching in Tim's room for anything he could find to explain his son’s shifty behavior, and eventually discovered Tim’s costume and personal journals detailing his adventures. He went straight to Wayne Manor, threatened Bruce with a gun and forced Tim to retire.

Tim Drake is known as the smart Robin. The genius superhero who was on his way to succeeding Batman as the world’s greatest detective. In fairness to Tim, he was wracked with guilt after believing he’d accidentally killed someone, and his focus as Robin had deteriorated as a result. Nonetheless, this particular slip-up was beneath him, and made Tim look more like a Boy Blunder than a Boy Wonder. 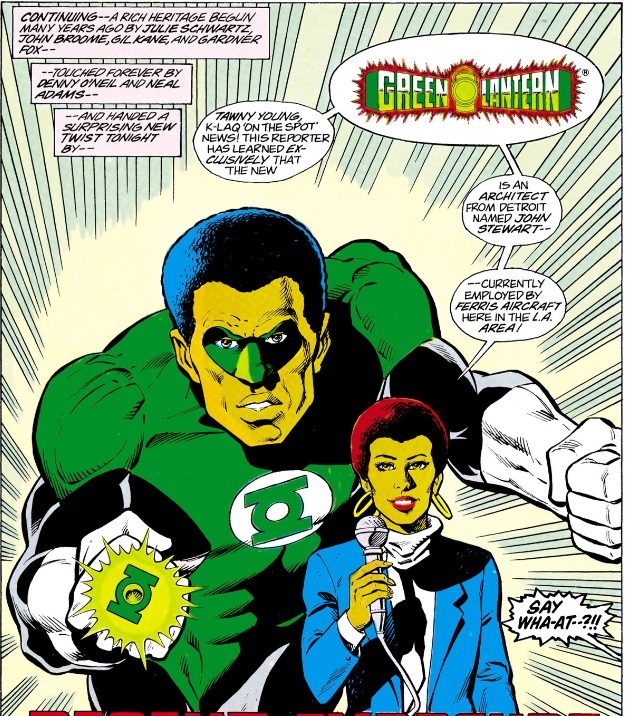 In Green Lantern/Green Arrow #87, the world was introduced to John Stewart – an out of work architect and replacement for Hal Jordan after Guy Gardner got run over by a bus.  Hal began John’s training right away, and just fast was John’s refusal to wear the traditional Green Lantern domino mask along with the rest of the Lantern uniform. To quote the man himself “I won’t wear a mask! This black man lets it all hang out! I’ve nothing to hide!”

It's no wonder, then, how Hal, John, Green Arrow and the others reacted when a reporter named Tawny Young exposed his identity to millions on television in Green Lantern #188. Everyone feigned surprise, but as Young points out by going through John’s public record of Green Lantern service, he never wore a mask! When talking to those closest to him, everyone was happy to spill details on their friend. From the kids on the street to a former lover to John’s own mother! When Hal Jordan resigned from the Green Lantern Corps and John replaced him full time, he took on the mask as a show of solidarity. Once his secret blew wide open however, he again went maskless, which had its pros and cons. His friends and family were thrilled, but he lost his job at Ferris Aircraft and was attacked in his home by Sonar on the same day. If he could do it all over again, do you imagine he’d think twice about “letting it all hang out”?

4. FORGETTING HOW FAMOUS YOU ARE 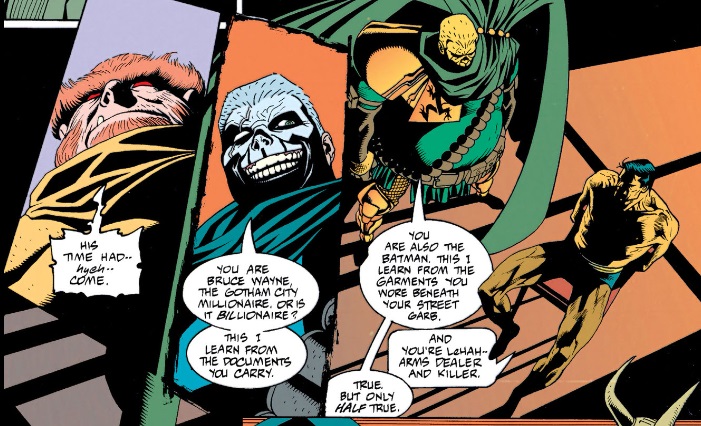 In Batman: Sword of Azrael, Bruce and Alfred travel to Switzerland, investigating the murder of one Jean Paul Valley by Carlton LeHah – a deranged member of the Order of St. Dumas. During a fight inside a hospital, LeHah – calling himself “Biis” – defeated Bruce by throwing a shelf full of hallucinogenic chemicals over him. He kidnapped Bruce and went through his things, finding clues to his identity and his half-worn Batman costume underneath his clothes.

This was a bizarre error in judgement on Bruce’s part. For one thing, he chose to bring Alfred along with him on this adventure. If that hadn’t clued people in, the fact of identification documents on his person in concert with his Batman costume would’ve been the real kicker. And it was. LeHah was based outside of Gotham City, but knew who both Bruce Wayne and the Batman were by reputation. Bruce didn’t travel under his street alias of Matches Malone or anything, he searched for a wanted man in his normal identity. He’s eventually saved by Jean Paul’s son, who would go on to become the successor to the Azrael mantle, and later Batman himself during Knightfall. It’s the least Bruce could do to assure somebody could be trusted to properly keep his identity secret, if not himself.

5. GETTING FED UP WITH TEENAGERS

In Supergirl #10, Kara tries attending high school and living the life of an average 15-year old girl. The problem was that coming from Krypton she didn’t know how average 15-year old girls live. She drifted through her classes, questioning the utility of everything from American history to Biology to deciding who to sit with at the lunch table. Throughout the day she made friends with Becky and Drew, and is invited to Becky’s sleepover. Kara also invited Sarah, a bigger girl who is quickly body-shamed by Becky and her other friends. This put her at a loss for words, and she took her concerns to Drew the next day. Unfortunately, Becky – aware that Drew had a crush on her – tricked Kara into getting garbage dumped on her and warned her to stay away from her boyfriend. Having enough, Kara removed her brown wig and glasses (along with the rest of her civvies,) rose to the air and flew away from the school in her Supergirl costume – in full view of everyone. Unlike the previous heroes who tried (and failed) to maintain a secret identity, Kara Zor-El gave it about twenty-four hours before she’d had her fill. Whether it was the cost of keeping a double life or the trials and tribulations of high school, neither was for her and she flew off, more content to battle supervillains than to spend one more minute hiding who she really was.

What's the dumbest secret identity reveal in comics history? Talk about it in our Community!