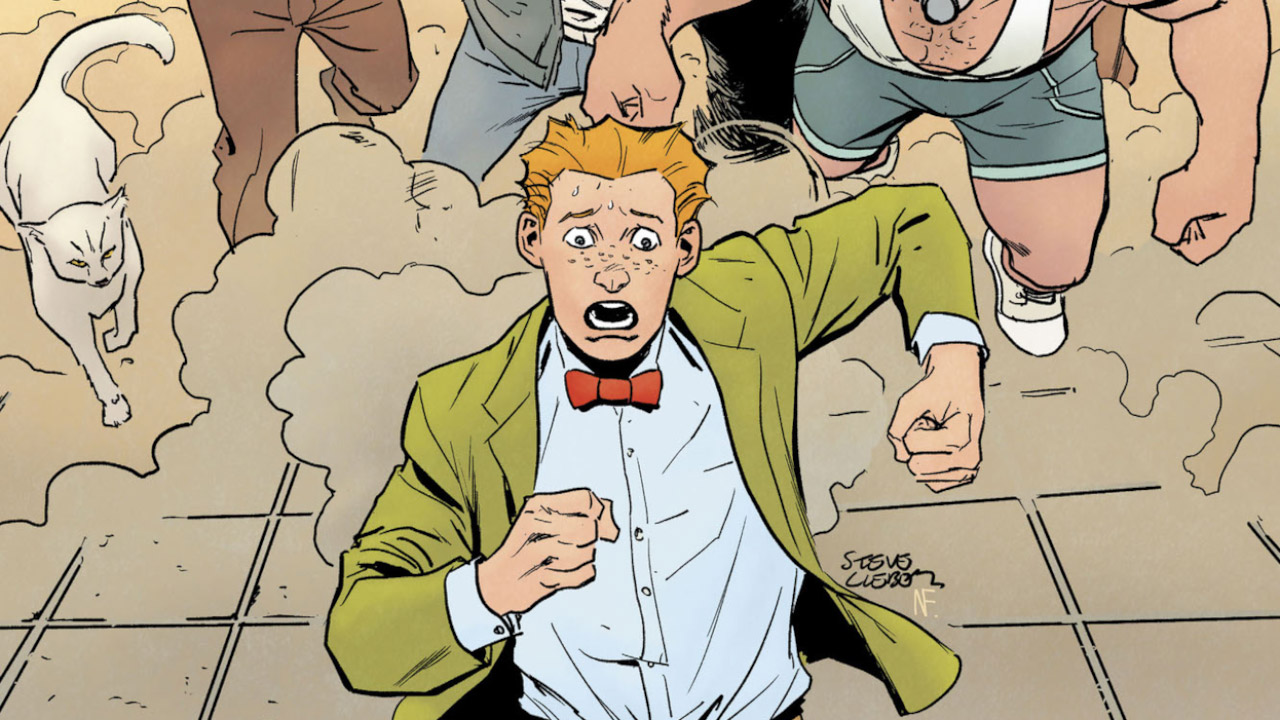 Make room, Harleen, because a classic clown is back in town. Congratulations are in order to SUPERMAN’S PAL, JIMMY OLSEN, this year’s recipient of the prestigious Ringo Award for Best Comedy Series! It’s recognition a long time coming, after all. While Harley’s been delighting us since her humble beginnings as a Joker hench-clown with her own comics, headlining feature films, and universally acclaimed animated series, it’s sometimes easy to forget that another unlikely star in the DC Universe went through this cycle of popularity from relative ubiquity. That’s right: Jimmy Olsen was the Harley Quinn of the 1950s. And we have the receipts to prove it.

DEBUTED OUTSIDE THE COMICS SPHERE

Every Quinntessential fan knows that the Clown Queenpin didn’t get her origin from the comics -- rather, she was created to fill out The Joker’s cast of henchmen and goons for Batman: The Animated Series. But long before ANY DC series had even made the jump to television, Jimmy Olsen was already breaking media boundaries. With few supervillains to speak of, the daily Superman  radio serial relied heavily on Clark’s coworkers at the Planet  to fill out the supporting cast. Though an unnamed bowtie-wearing office boy appears as far back as ACTION COMICS #6, Jimmy Olsen was first brought to life in an early episode of that radio drama in 1940.

GREW FROM THE SHADOW OF A MORE POPULAR CHARACTER

Becoming the “sensational character find” of an era isn’t always as easy as jumping out of a drum. Hundreds of new characters are introduced into the DC Universe every year, and there’s no surefire formula to success and stardom… but there are a few well-established tricks. One of the most tried-and-true methods for launching a new character is to first establish them in an essential supporting role to a more popular one. In the case of The Joker, Harley was created to fill the role of an essential second-in-command who could act on his behalf. (After all, SOMEBODY had to wheel the big cake he was hiding in to the table in “Joker’s Favor.”) In Jimmy’s case, it was creating a young go-getter who could look up to Superman as a surrogate for the millions of listeners at home hanging on Superman’s every deed in between commercials for Pep cereal.

HAD HIS OWN ZANY LONG-RUNNING COMIC BOOK SERIES… 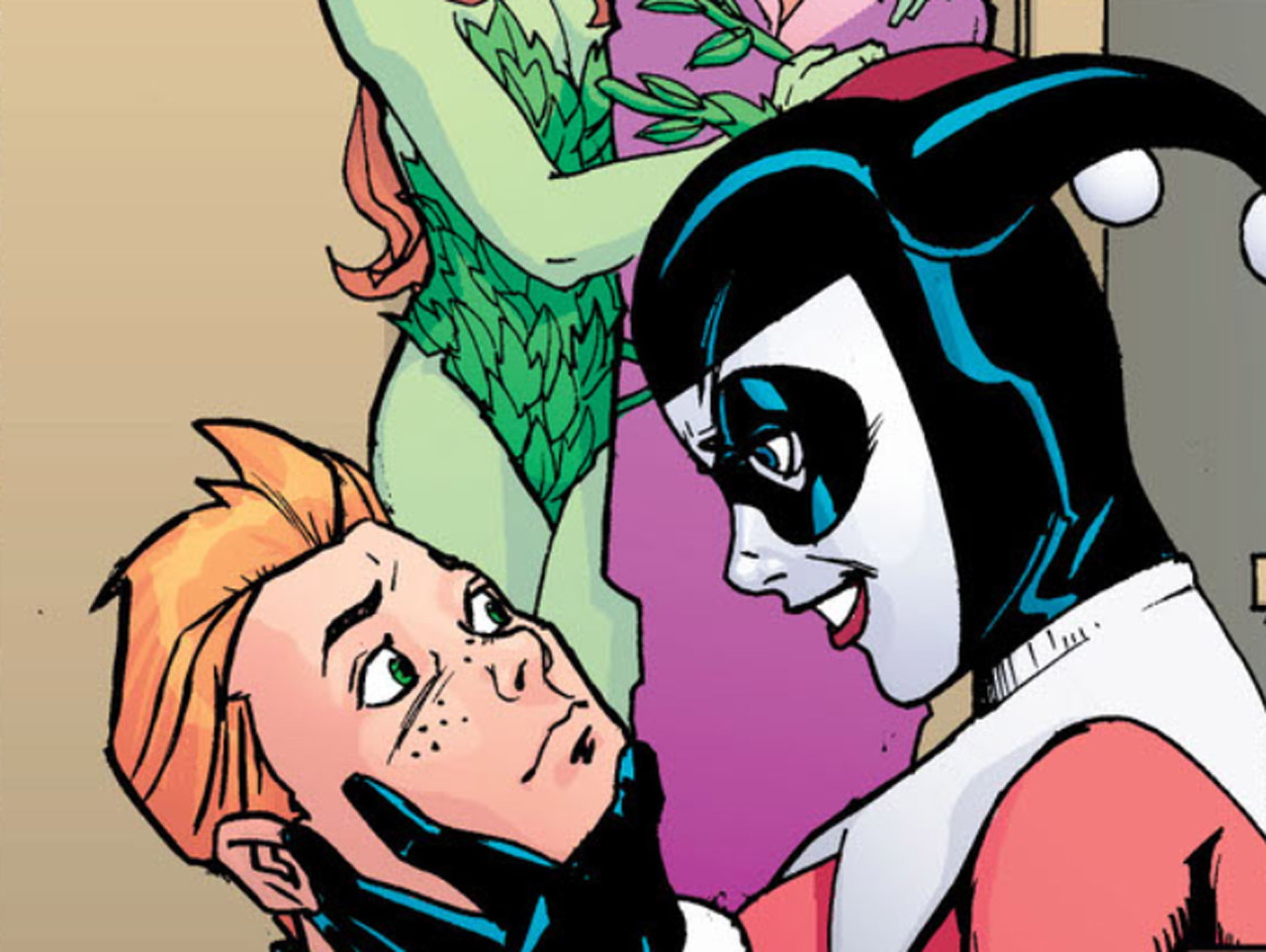 Rule number one of the Harley Quinn comics since 2013: don’t ask how they fit into continuity. Just put on your bell-topped good time jester hat and have fun. Harley’s madcap adventures usually don’t have much of a part to play in the larger DC Universe, but they’re always unashamed in drawing upon them for comedy and the occasional merciless lampoon whenever called for. Though far more modern in its comedic sensibilities, though, the HARLEY QUINN comics as originally envisioned by the superstar Conner/Palmiotti team do have an antecedent in DC’s publishing history. That’s right: the original SUPERMAN’S PAL, JIMMY OLSEN series from the character’s heyday. Jimmy’s strange transformations, wacky schemes, and occasional entanglement with the forces of Apokolips made his series an unpredictable source of chaos the likes of which wouldn’t be seen again until… well, you know who. 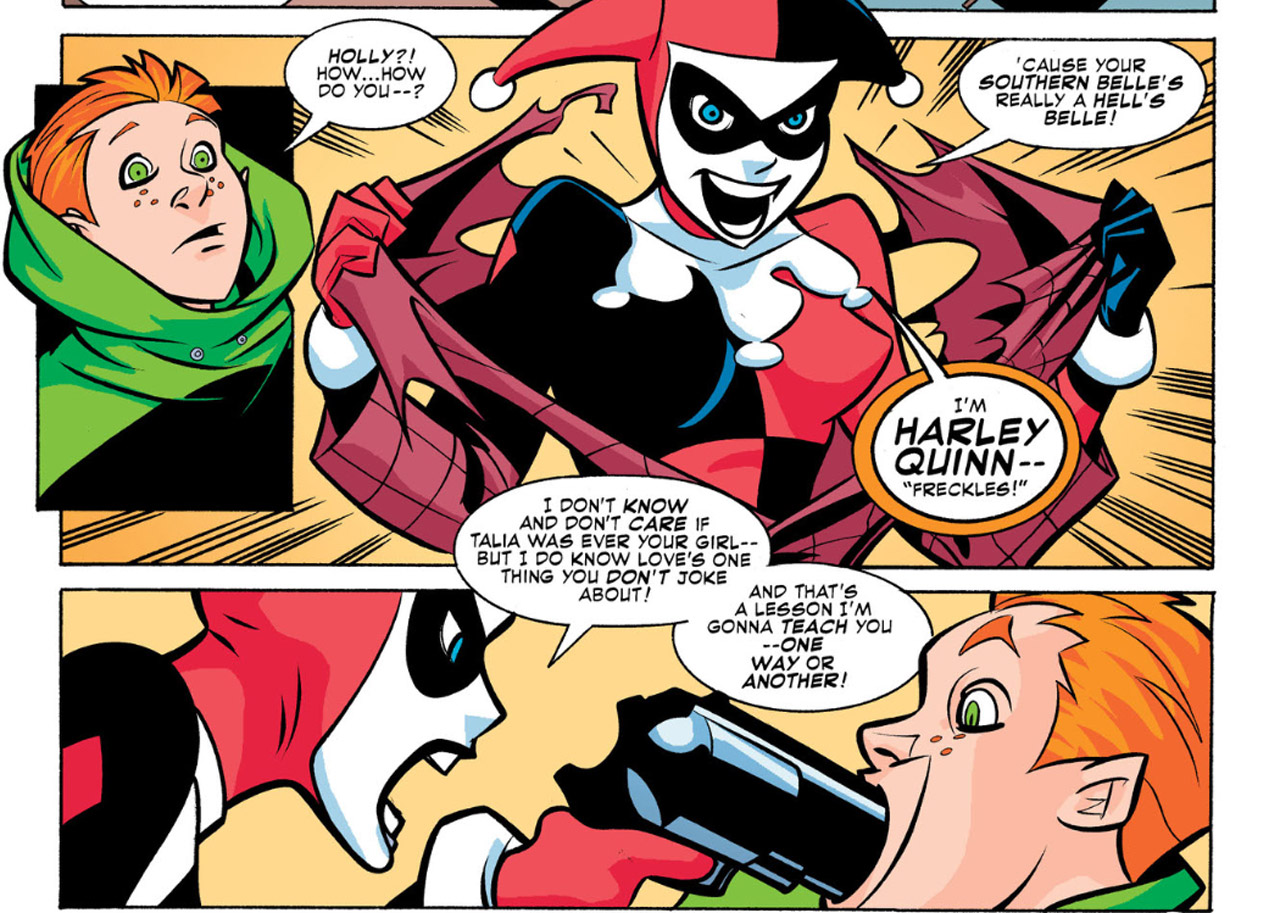 And yet, successful as Jimmy and Harley have both been in their time, it wasn’t instantaneous. Though she first appeared on TV in 1992, it wasn’t until 2000 that Harley made her official jump to the larger DCU, with a special tie-in issue to the “No Man’s Land” event. Though Jimmy transitioned into the comics much faster, first officially in 1941’s SUPERMAN #13, it wasn’t until the ‘50s that Jimmy exploded into stardom with his own comic book series, and a starring role as played by Jack Larson in the Adventures of Superman  TV series.

FACE OF A GENERATION 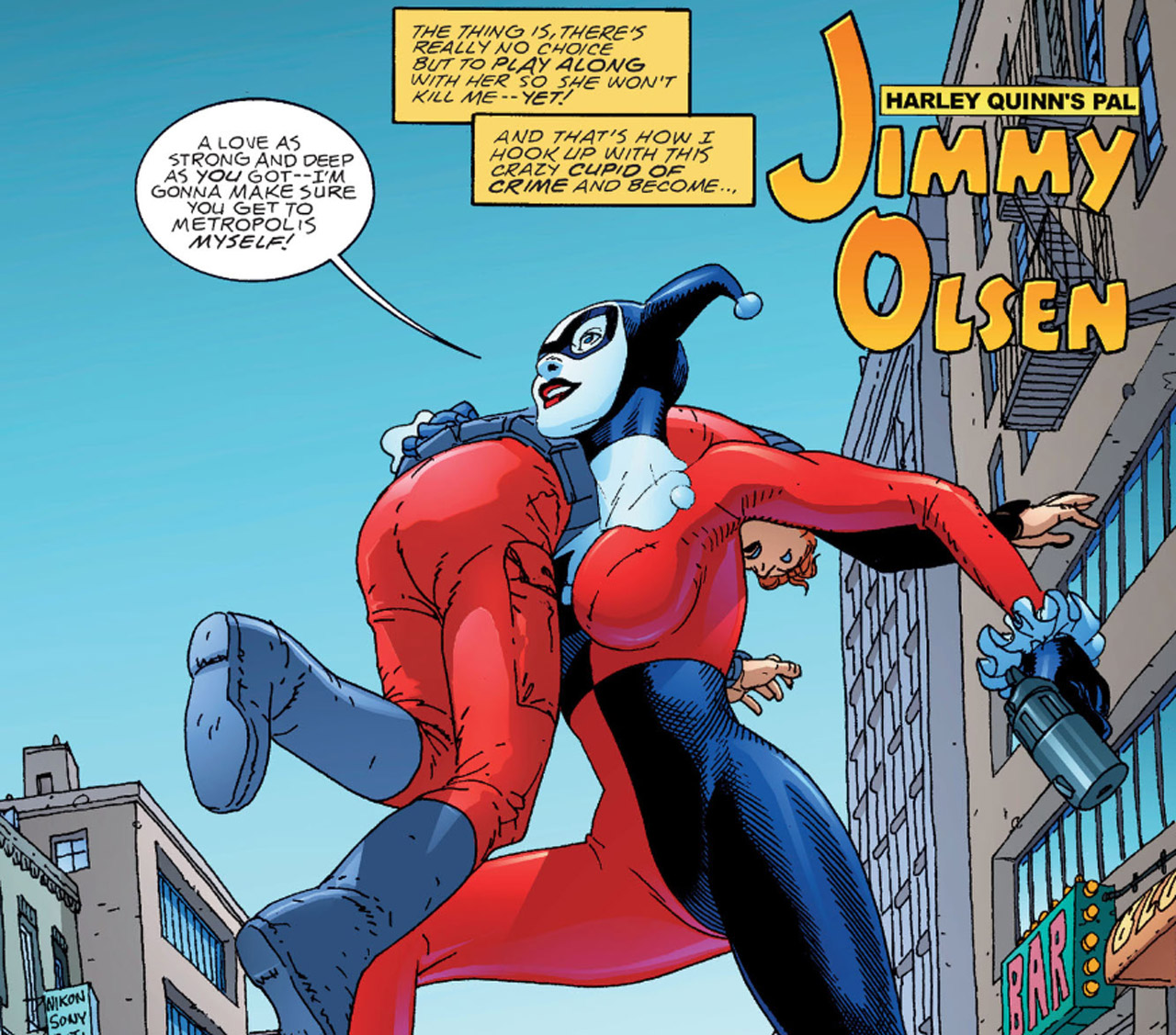 Between radio, television, and his own line of comics, Jimmy Olsen was everywhere that DC could be found in the 1950s. He was the poster boy for every young person who dreamed of looking up in the sky and seeing Superman fly overhead. Decades later, Harley Quinn has also become an unlikely surrogate for millions of fans. Standing for personal reinvention and an embracement of one’s inner hellraiser, Harley Quinn has come to represent the DC community on comics, screen, film, and video games. And with reports that DC will start branching into the narrative podcast space in 2021, will it be so long before Harley comes back to claim Jimmy Olsen’s original audio turf? At this point, while her reign of mirth is far from over, we can only speculate who the NEXT Harley or Jimmy will be to take the world by storm. (We’re hearing some things about that “Punchline”...) 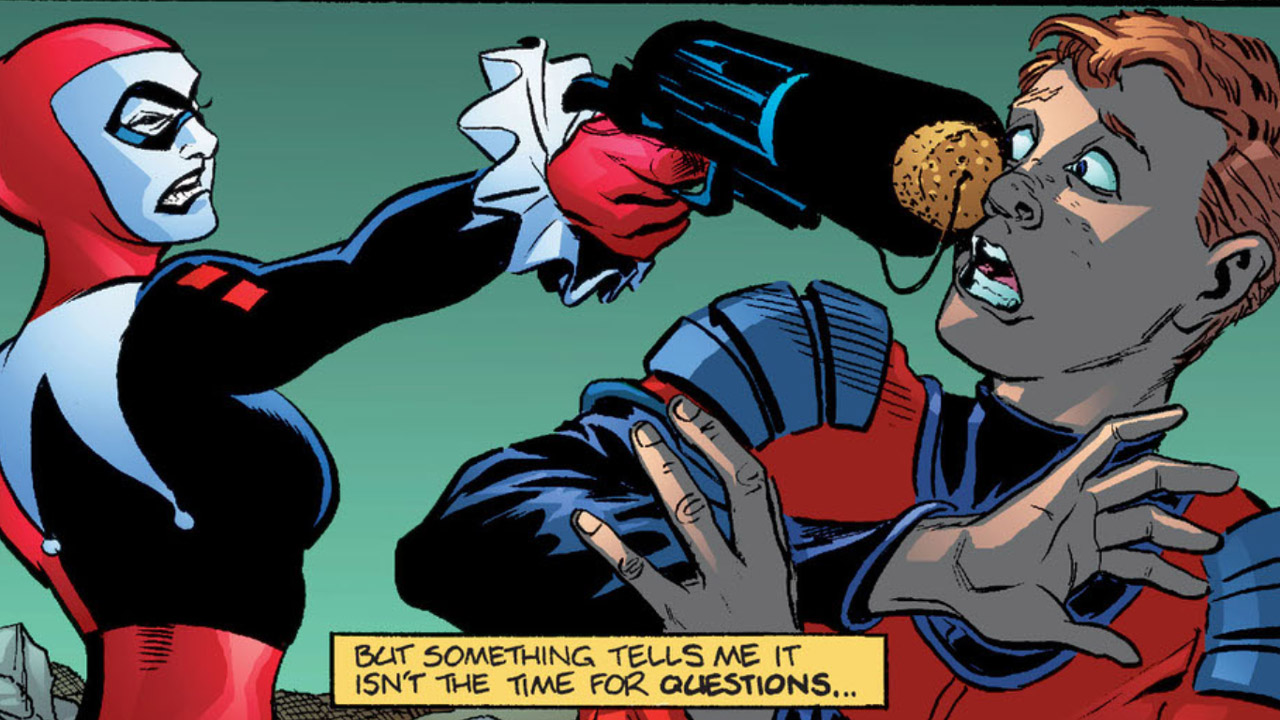 Are you a Jimmy Olsen fan? Let us know in our Community!