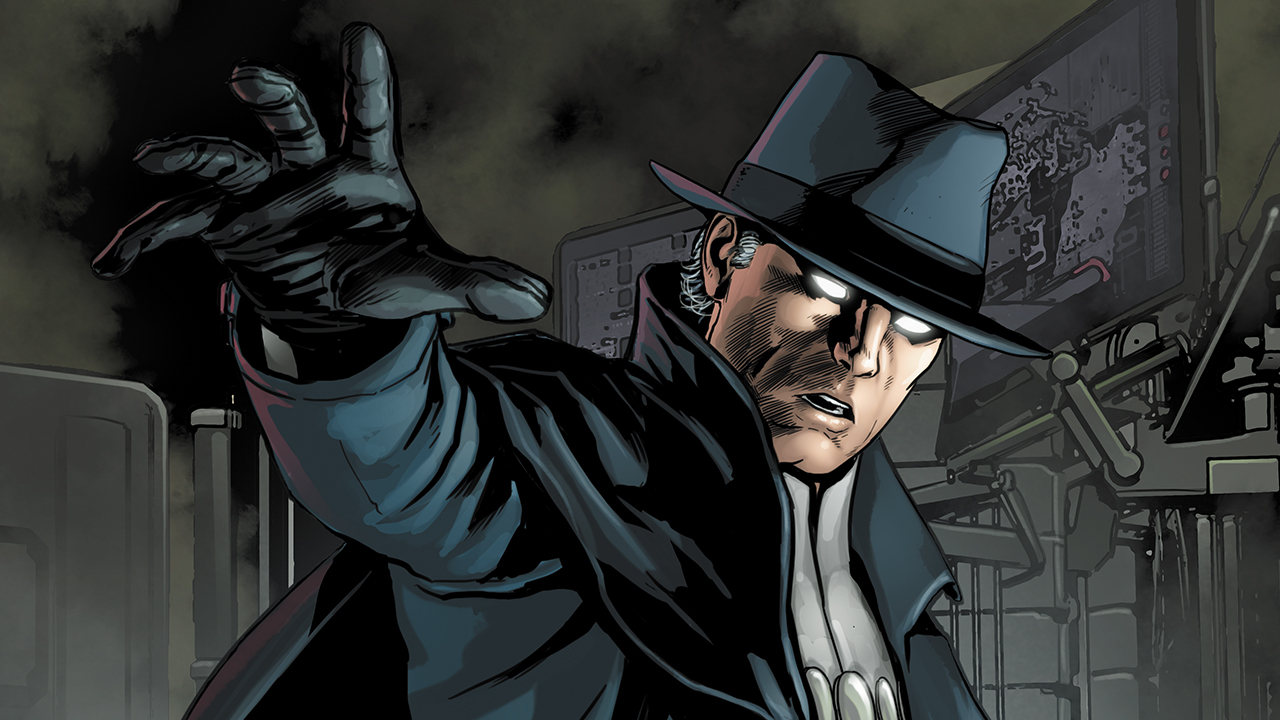 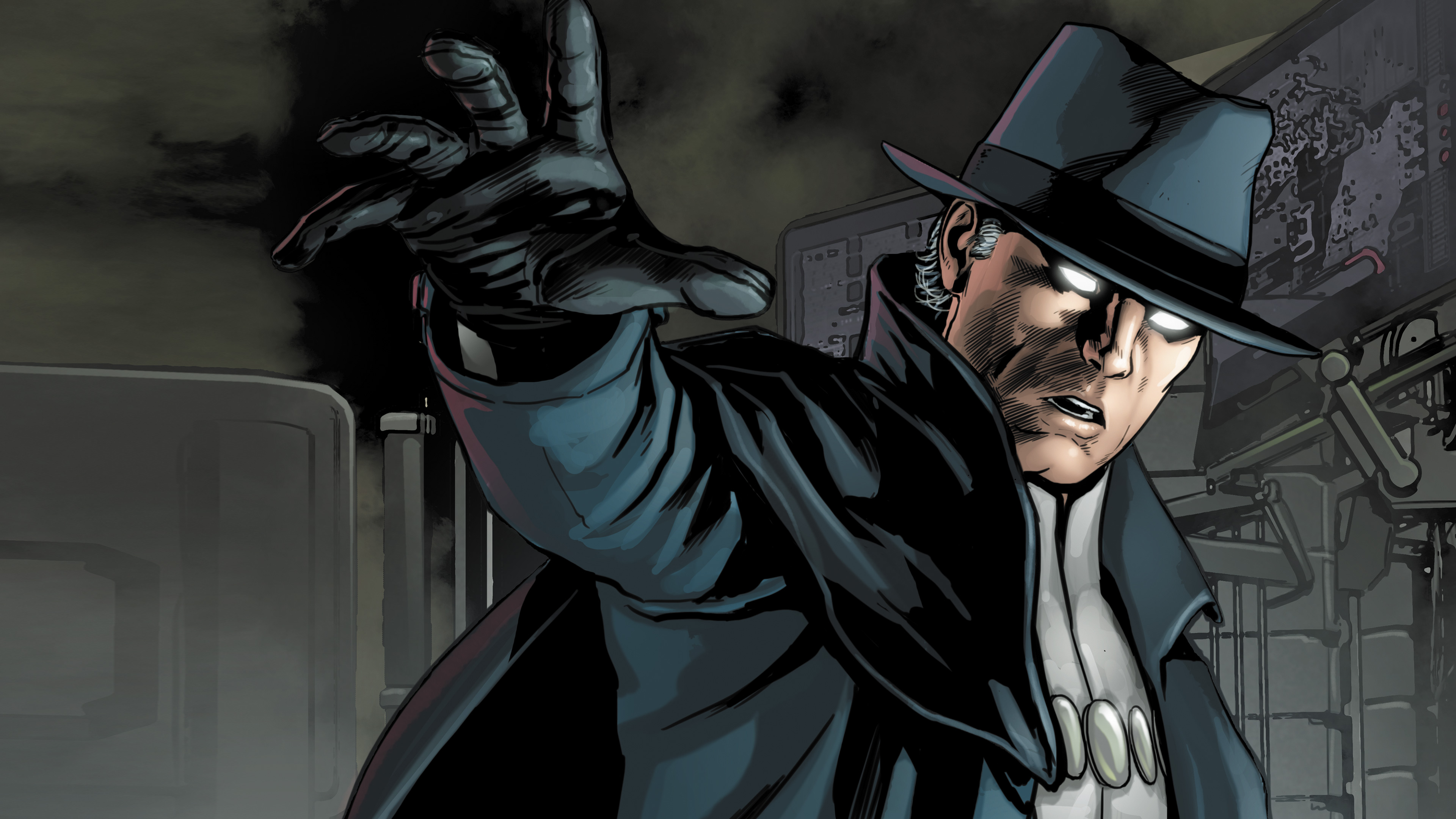 5 Reasons We Love the Phantom Stranger

Dressed in a dark cloak and hat, the Phantom Stranger is no ordinary DC Super Hero. This mystery man is one of the DC Universe’s most powerful characters, yet, true to his name, he remains a stranger. Despite his cryptic persona, we absolutely love the Phantom Stranger, and since he makes his live-action debut in the latest ‘Swamp Thing’ episode “Drive All Night,” a whole new audience is now discovering why he’s so special. Here are 5 reasons why we love the Phantom Stranger…

His Origins Are a Mystery 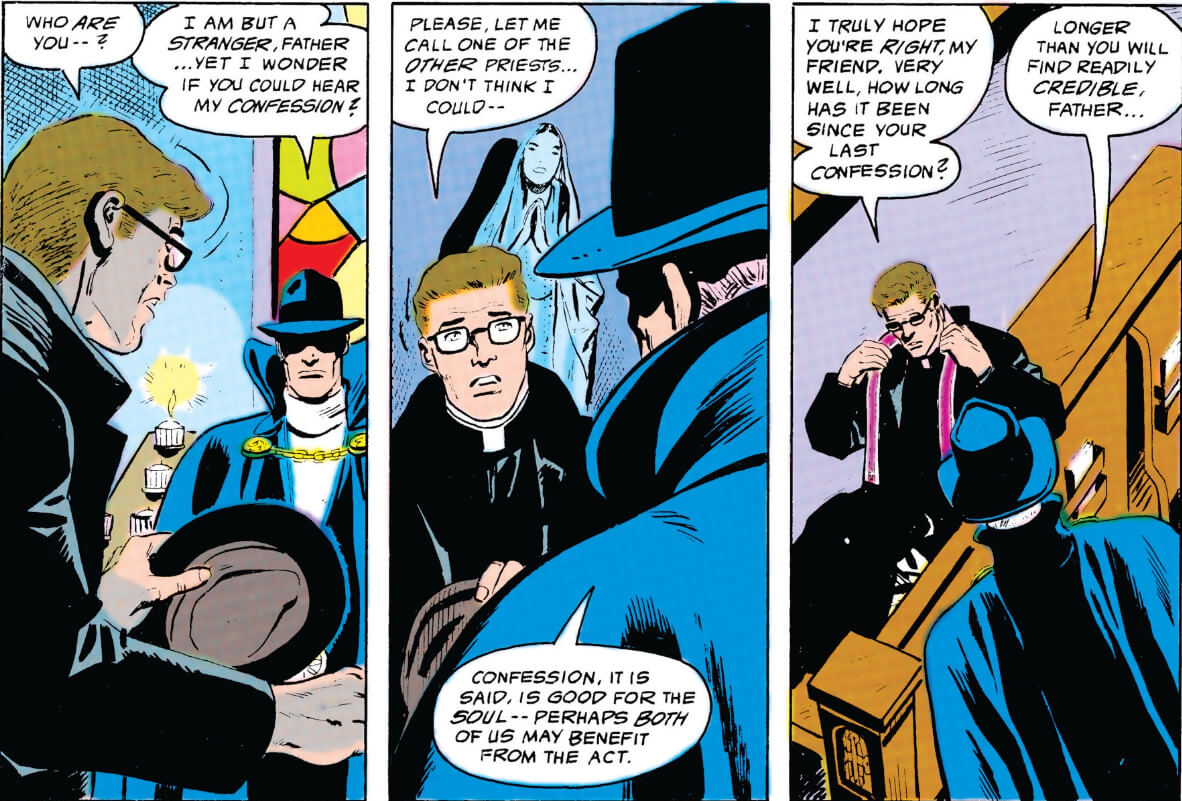 Although he’s been around for many years, the Phantom Stranger’s true origins remain a mystery. Nobody knows his real name or how he received his omniscient powers. ‘Secret Origins’ #10 presented four possible backstories for the Stranger, with no indication as to which one was real. One story presented him as a modern version of the Wandering Jew, while another tale stated he was an ancient man barred from the afterlife after committing suicide. 2012's ‘Phantom Stranger’ #0 (written by Dan Didio and penciled by Brent Anderson) depicted him as Judas Iscariot, doomed to walk the Earth to atone for his sins. With each origin story contradicting the others, we may never unravel the truth about the Phantom Stranger’s beginnings. But that might be for the best – after all, what else would you expect from somebody with the name Stranger?

He Knows All, He Sees All 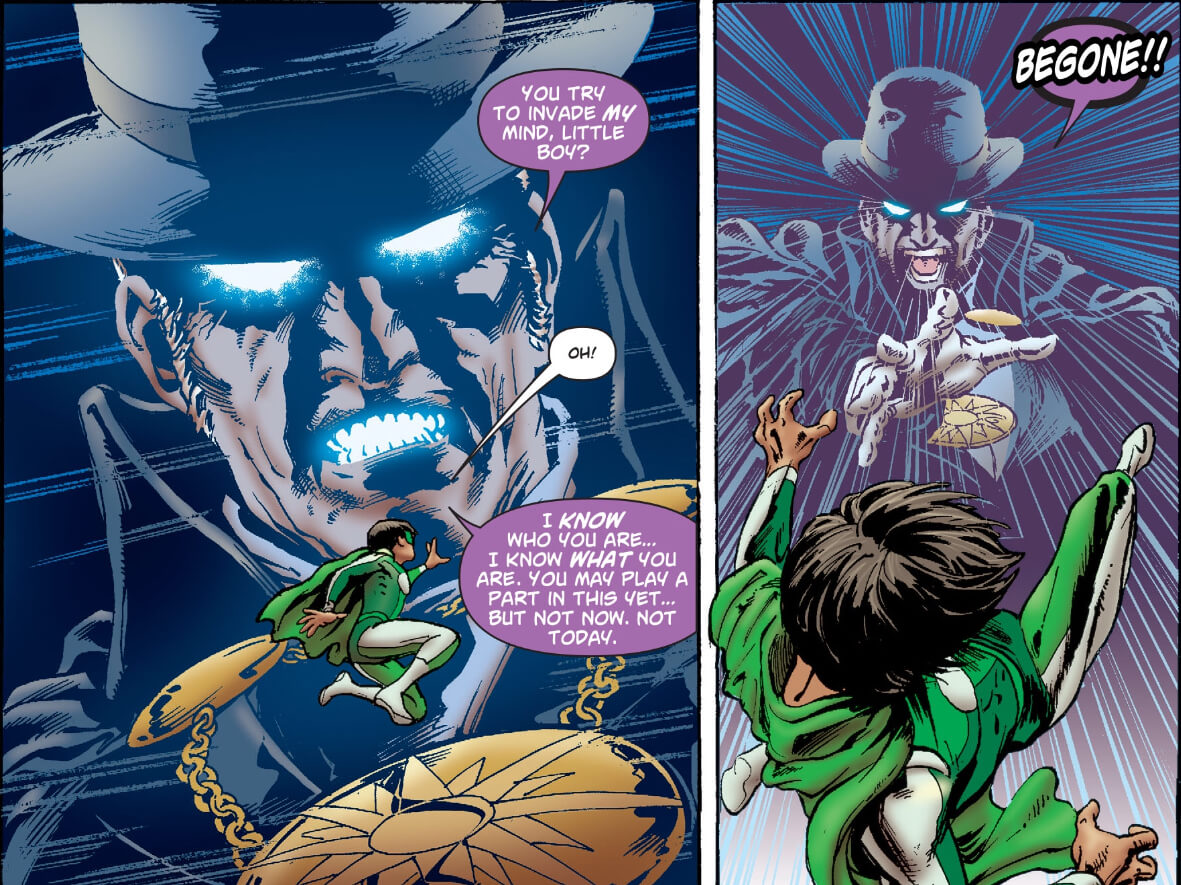 We weren’t kidding when we said that Phantom Stranger was one of the most powerful heroes in the DC Universe. We may not know where his great powers come from, but we know that they are nearly infinite. For starters, the Phantom Stranger has displayed uncanny omniscience. He seems to know everything past, present, and sometimes future! It may take the Dark Knight hours or days to solve some mysteries, but the Phantom Stranger can close a case in seconds. The Stranger is a master of magic, he can travel through dimensions, and he can manipulate reality to his whim. He’s also a master of hand-to-hand combat -- not that he needs it, because his energy blasts are powerful enough to take down most enemies. The full extent of the Stranger’s powers has yet to be revealed, as new abilities seem to pop up when readers least expect it. Suffice it to say, it’s a good thing he’s on our side!

He's Neither Alive nor Dead 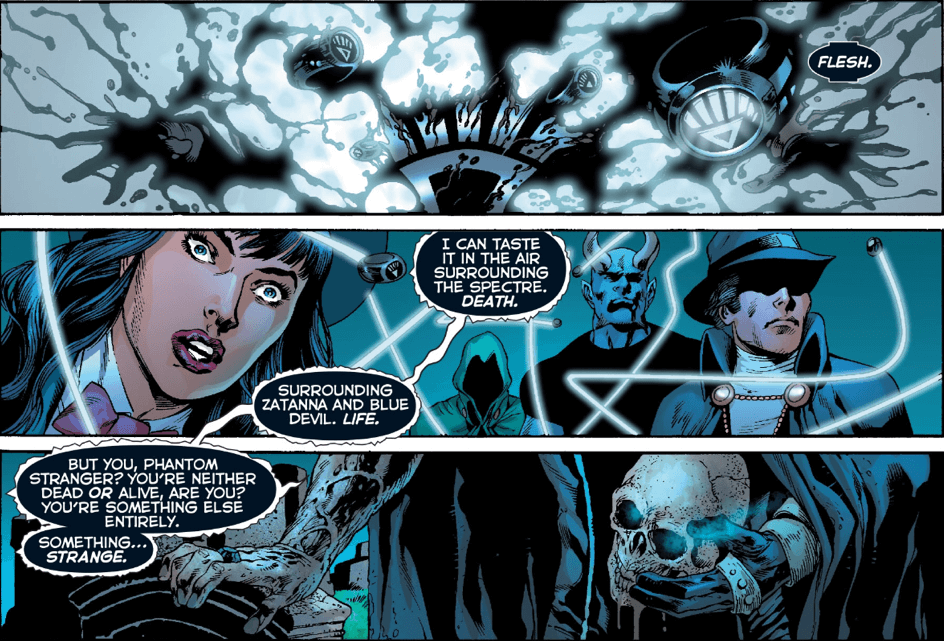 The Phantom Stranger exists in a weird place between life and death, preventing him from being killed. In ‘Phantom Stranger’ #14, the Stranger’s heart was forcibly removed from his body, but he was still able to stalk his criminal prey. Realizing he can’t be killed, the Spectre has sought to torment the Stranger in other ways, such as turning him into a rodent in ‘Day of Vengeance’ #2 (written by Bill Willingham and penciled by Justiniano).  In ‘Blackest Night’ #2 (written by Geoff Johns and penciled by Ivan Reis), a Black Lantern attempts to draft the Phantom Stranger into the Black Lantern Corps, but a quick scan of the ghostly hero reveals the startling truth. “You’re neither dead or alive, are you? You’re something else entirely. Something strange,” the Black Lantern stated. Like everything else about him, the Phantom Stranger’s true nature remains a mystery.

He Doesn’t Do Teams 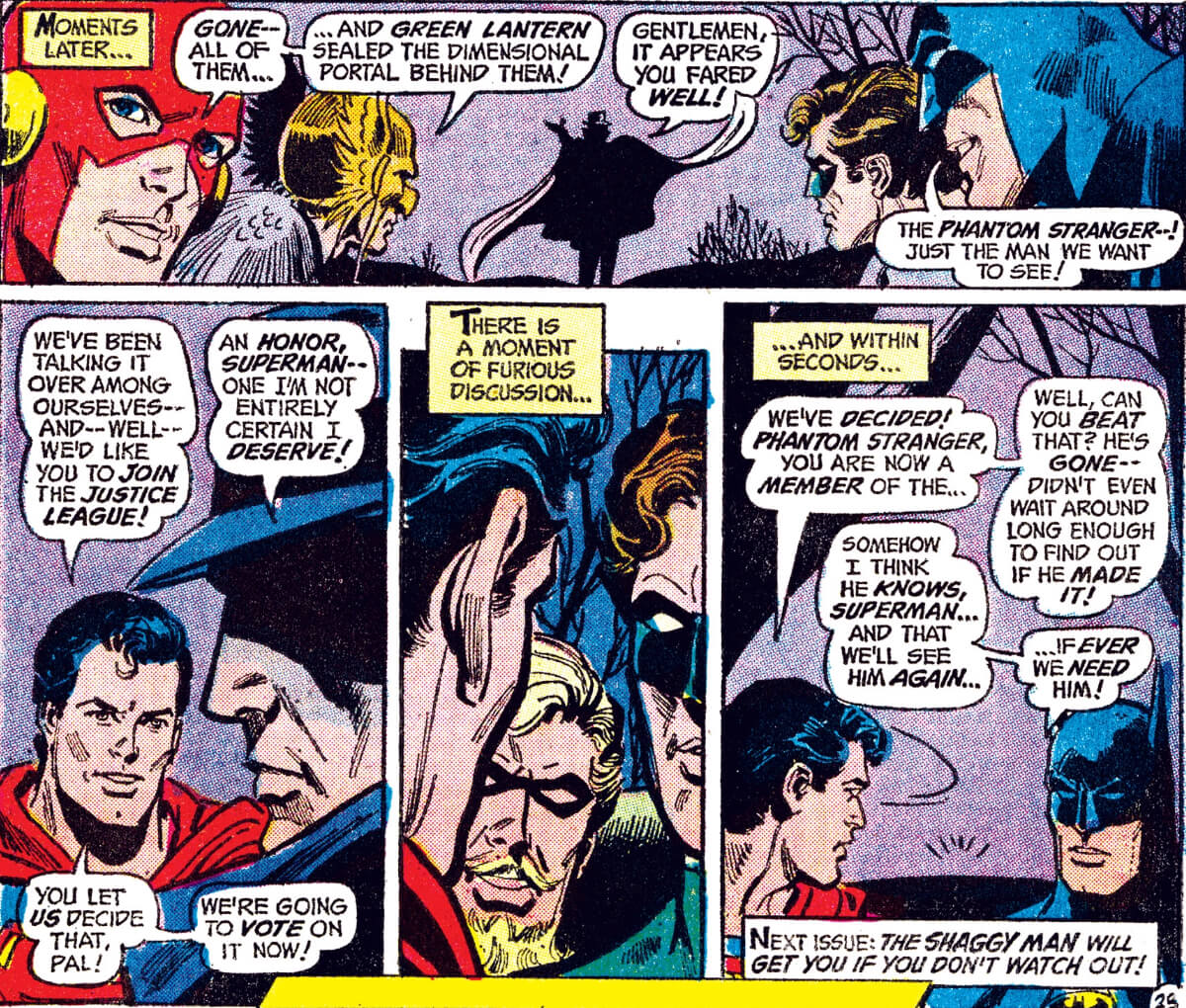 The Phantom Stranger’s unique abilities have benefited Earth's heroes many times, making him a popular choice for Justice League membership. Superman formally invited the Stranger to join the League in ‘Justice League of America’ #103 (written by Len Wein and penciled by Dick Dillin), but he disappeared before responding to the offer. The Phantom Stranger continued to assist the League, but his status as a member was murky. He wouldn’t show up for the regular meetings, and the League didn’t know how to contact him; but if a crisis required his attention, he would join the heroes for battle. The Phantom Stranger had no problem working with them, but it was going to be on his terms, as there were other matters that required his attention. In the end, the League wound up filling his membership slot with other heroes as they were never sure what place the Stranger held in their group. The Creeper also tried to form a group with the Stranger in ‘Blue Devil’ Annual #1 (written by Dan Mishkin and Gary Cohn, penciled by Paris Cullins) and the Stranger enthusiastically refused. While the Phantom Stranger doesn’t do traditional teams, this particular refusal may have had more to do with Creeper’s insufferable nature. After all, even a Phantom Stranger has his limits. 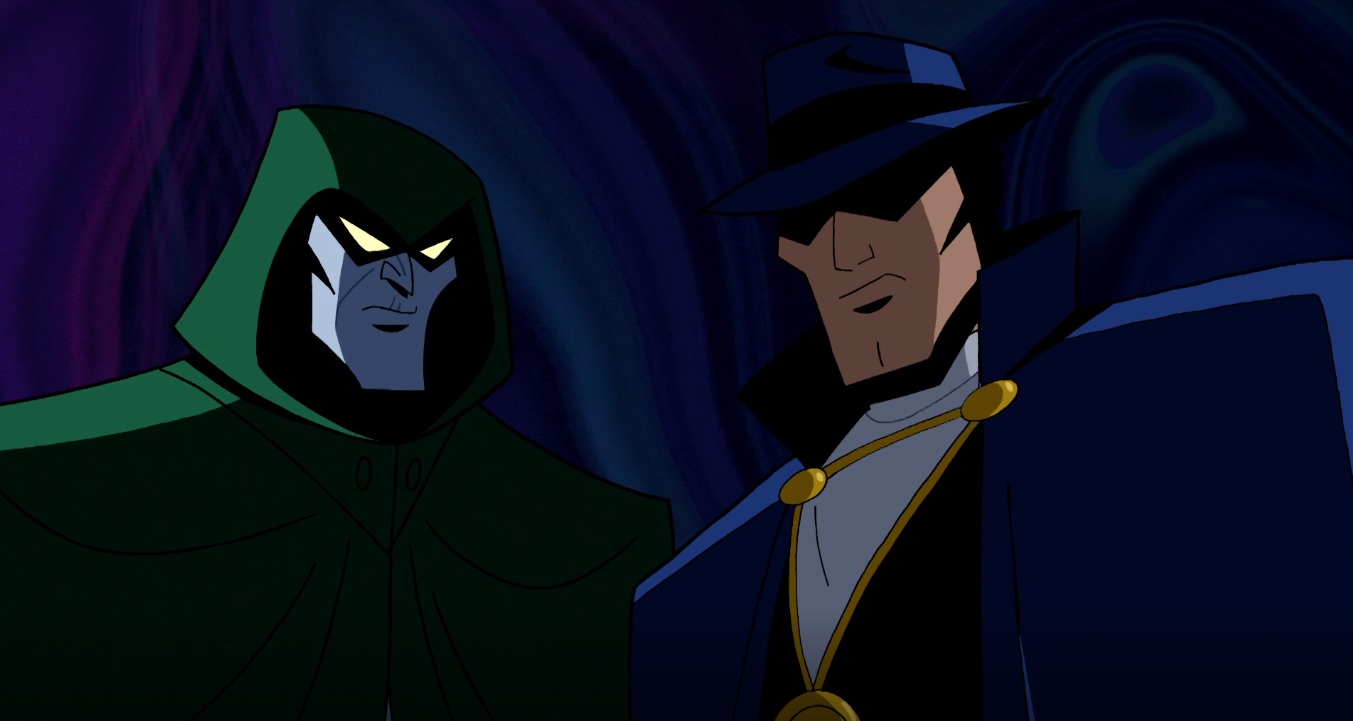 The Phantom Stranger has walked the Earth for centuries and has seen unspeakable evils, but he hasn’t let that change his outlook. Despite the many horrors he’s witnessed, he still believes in the goodness of humanity. This has put him at odds with the Spectre, who believes humanity must be punished for their sins. The two powerful forces have argued on many occasions about justice vs. vengeance, most memorably in the acclaimed ‘Batman: The Brave and the Bold’ episode “Chill of the Night.” In this episode, the Spectre (voiced by Batman: The Animated Series star Mark Hamill) is convinced that Batman will give in to his dark nature when he confronts the killer of his parents, while Phantom Stranger (voiced by BTAS's Kevin Conroy) believes the Caped Crusader’s good nature will triumph. The two powerful entities make a wager, and the Phantom Stranger is proven right when Batman shows restraint against his parent’s killer. It’s admirable that the Phantom Stranger can continue to hold such an optimistic view after all the horrible things he’s seen. And that’s yet another reason we love him!

Are you a fan of the Phantom Stranger? Let us know in our Community!